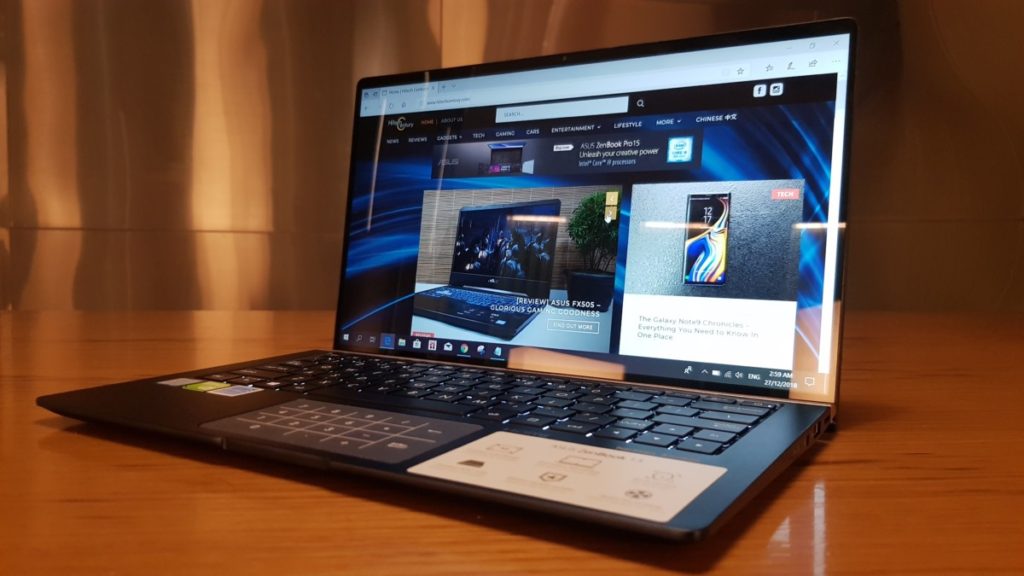 The ZenBook 13 UX333 is one of the smallest and most powerful notebooks in its class with beautiful design, a great display and an excellent keyboard with several novel enhancements that aim to maximise utility like its overlaid numeric touchpad. Add in its ultra compact form factor and you have a winner.

Creating a compact laptop that can fit in your handbag without compromising on performance, aesthetics and, for the matter, durability is an elusive grail that many laptop manufacturers have been attempting to attain for years but Asus may just be the closest contender yet with their new ZenBook 13 UX333 notebook that so far looks like the slimmest, smallest and most powerful thing currently on the block at this point in time.

Externally, our test unit of the ZenBook 13 UX333 has a matte blue brushed aluminium chassis complemented by gold metallic trim at key points. It also comes in a silvery white. The notebook includes several refinements from other Asus notebooks in terms of its design while adding a few more unique features of its own. Raising the lid of the notebook up also elevates the base of the notebook slightly on account of a raised bottom lip at the base of the lid that they’ve dubbed an Ergo-Lift hinge to introduce better airflow and a more comfortable typing angle which is a subtle yet effective bit of engineering on their part. 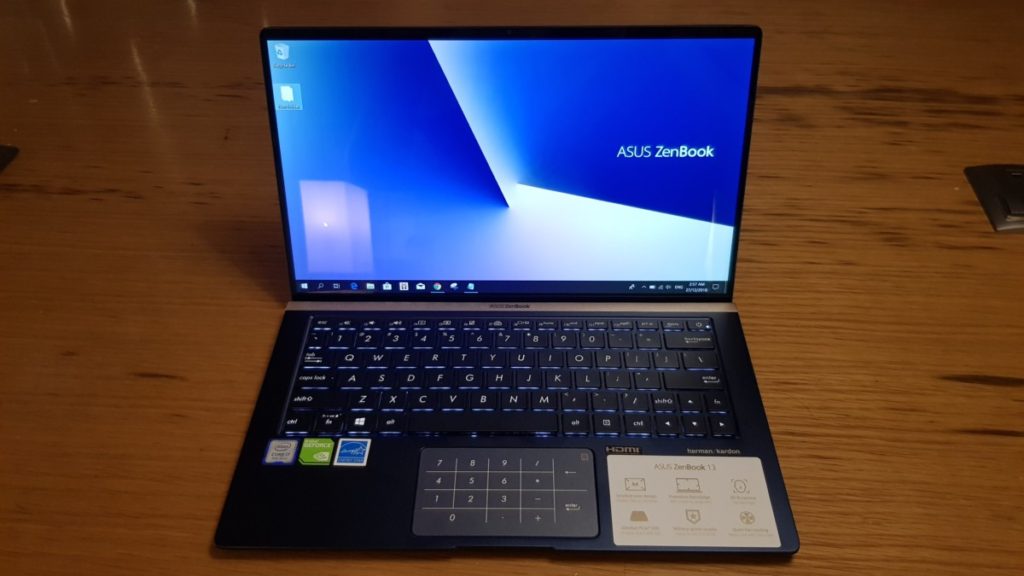 The finish itself is fortunately very fingerprint resistant and looks rather fetching to boot while also being rated to MIL-STD0810G standards of durability for extreme altitudes, temperatures and humidity which means it’s able to survive a good more hardship than a stock notebook. Where it really impresses though is just how small it is.

The ZenBook 13 is, to date, the smallest 13-inch laptop on the planet and manages to cram in a 13.3-Inch Full HD display into a chassis that is barely larger than a sheet of foolscap paper. According to Asus, the ZenBook 13 is actually 14.3% smaller than its predecessor the ZenBook 13 UX331 and 25% smaller than the older 2016 edition 13-inch  ZenBook UX330. 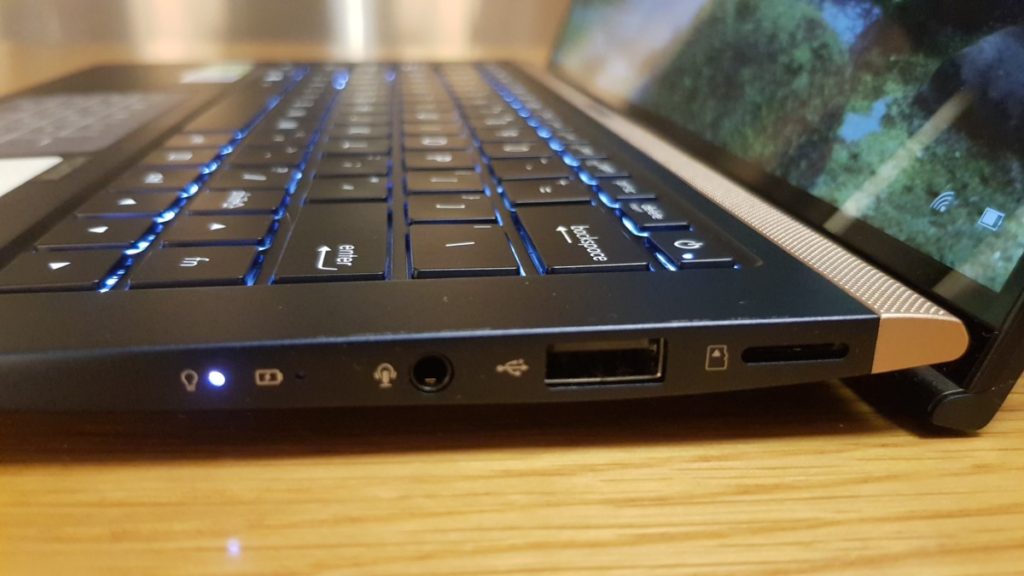 For the ZenBook 13, it achieves its space savings on account of cramming in one of the slimmest bezels to date into the chassis to frame the display. Dubbed as a Nano-Edge display, the bezels are a mere 2.8mm at the sides and a waifish 3.3mm at the base though the top is just slightly thicker at 5.9mm to accommodate the appropriately placed selfie webcam perched just above the display. All this engineering allows it to attain a 95% screen-to-body ratio; an impressive achievement that competing laptops have yet to match, more so for the fact that it’s so small.

Hold it up in your hands and you’ll marvel at how small it is and its rather surprising heft. While it is small and slim at 16.9mm thin, it is also rather light at 1.19kg which is scads lighter than other equivalently equipped laptops though it does feel rather hefty. The right side comes with an audio jack, a USB 2.0 Type A port, and a microSD card slot. The left sports the obligatory power jack to keep it juiced, a full sized HDMI port, a USB C Gen 2 port and a USB 3.1 Type A port. 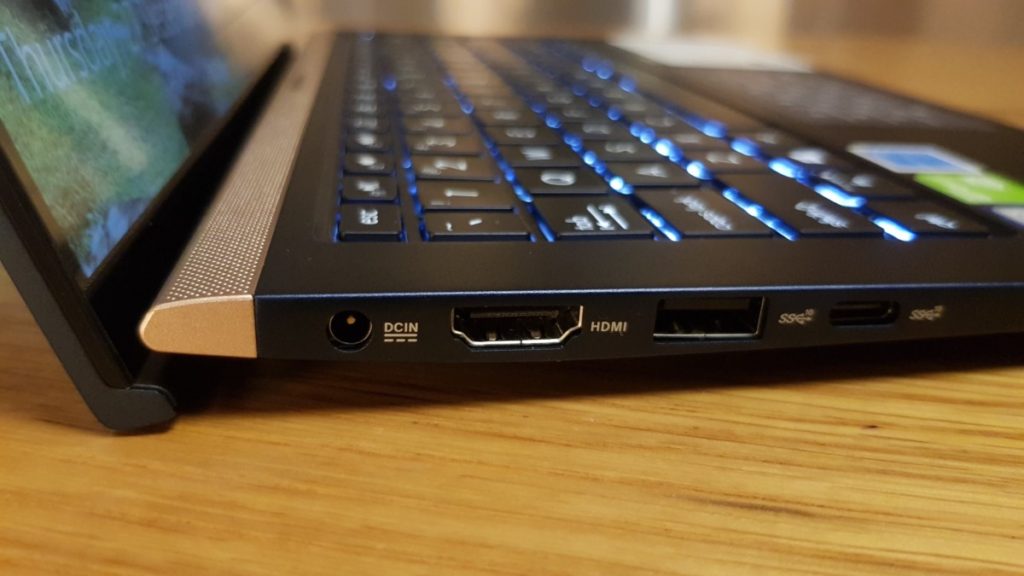 More ports would have been welcome but what they have on offer is more than sufficient for day to day tasks. Fortunately, the provided power brick is also relatively light and is about the size of a pack of smokes with enough cable length to work about a couple of metres away from a plug point. Having fabric braided cables for increased durability would be nice though.

Flipping the lid open is a surprisingly pleasant affair that can be done one-handed with the hinges sliding smoothly and gently sliding open to reveal a compact backlit keyboard and a rather novel addition that aims to maximise the utility of the ZenBook 13 UX333 – a numeric touchpad.

Seeing the limited space that Asus had to cram in extra keys, Asus has instead implemented an unorthodox keypad overlay on top of the touchpad that can be activated by pressing a button in the corner. This effectively grants you usage of a numeric pad in a notebook form factor that traditionally doesn’t even have that option to begin with.

The ZenBook 13 UX333FN is armed for bear and has quite an impressive set of specifications for its size. On top of the 13.3-inch Full HD display, the notebook runs Window 10 Home on an 8th generation Intel Core i7-8565U 1.8GHz processor, has 8GB 2,133Mhz DDR3 RAM and has a 512GB PCie 3.0 x2 SSD for storage. Rather than settle for half measures, the notebook packs an NVIDIA GeForce MX150 Max-Q GPU with 2GB GDDR5 VRAM which allows it a modicum of capability for basic gaming. This makes it one of the few laptops of its size to pack dedicated graphics, which makes for a substantial advantage over its compatriots who usually just tote around integrated graphics and leave it at that.

Under practical field conditions, the notebook did not disappoint. It booted up in seconds into the desktop and handled everything asked of it in a swift fashion. Everyday tasks such as web browsing, streaming video and going through Google docs and spreadsheets were handled with deft aplomb. The addition of the GeForce MX150 Max-Q GPU gives it a bit of extra punch and it was able to tackle Assassin’s Creed Odyssey at 1080P but otherwise low graphic settings; not bad if you’re looking for a diversion after crunching through a day’s worth of paperwork. 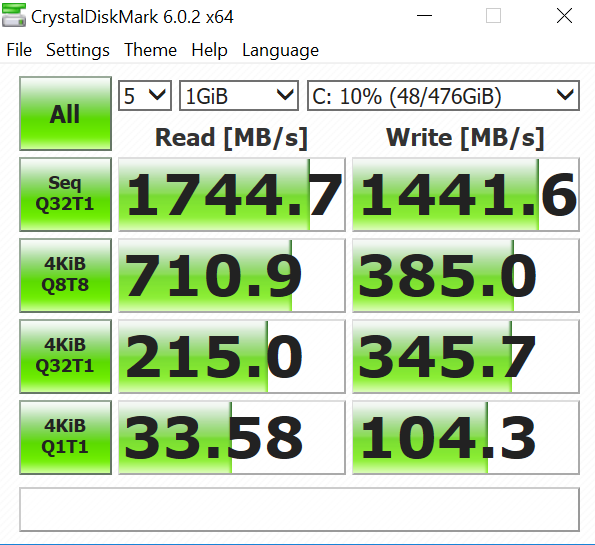 For the most part, the ZenBook 13 UX333 ran relatively cool for most tasks though it did get somewhat warm after extended use and gaming though it’s still relatively comfortable enough to deploy on your lap. This is on account of its heat vents that aim hot air off to the back towards the bottom edge of the display lid rather than directly downwards or to the back.

The display itself did not disappoint, serving up crisp detail, good contrast and some pretty lush hues with the built-in Harman Kardon tuned stereo speakers providing sufficient volume and with enough clarity for impromptu listening on the go. It’s loud and clear enough for viewing the odd Netflix flick and running through a Spotify playlist or two. 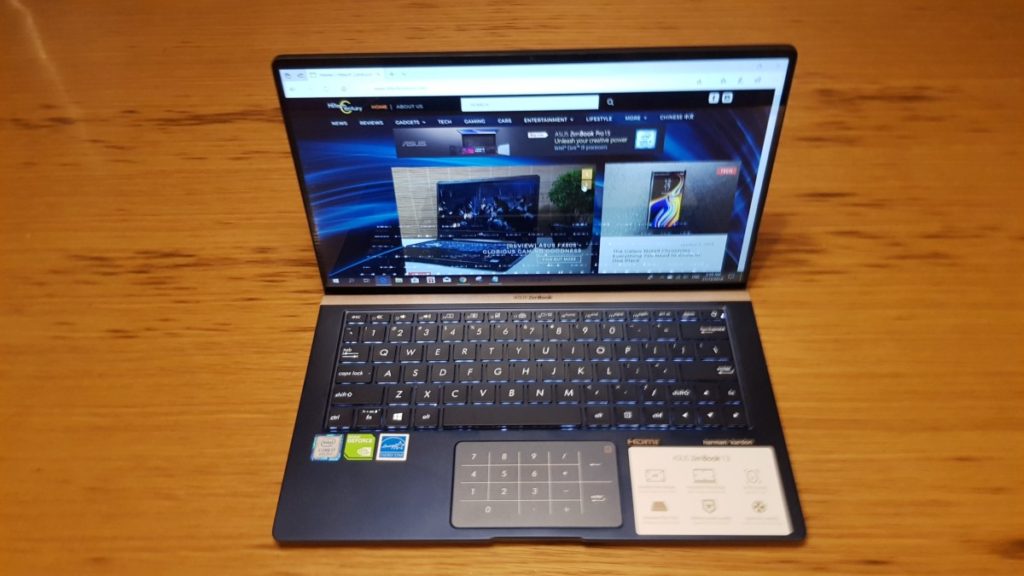 All this is well and good but what makes or breaks an ultra compact notebook of this nature is the quality of its keyboard. Fortunately, the ZenBook 13 UX333’s provided keyboard is up to snuff. Asus has made the most of the compact layout and the keyboard proves to be surprisingly pleasant to use with 1.4mm key travel and a tiny 0.2mm curve on the key caps providing enough tactility and allowing for a comfortable typing speed at about 92wpm. 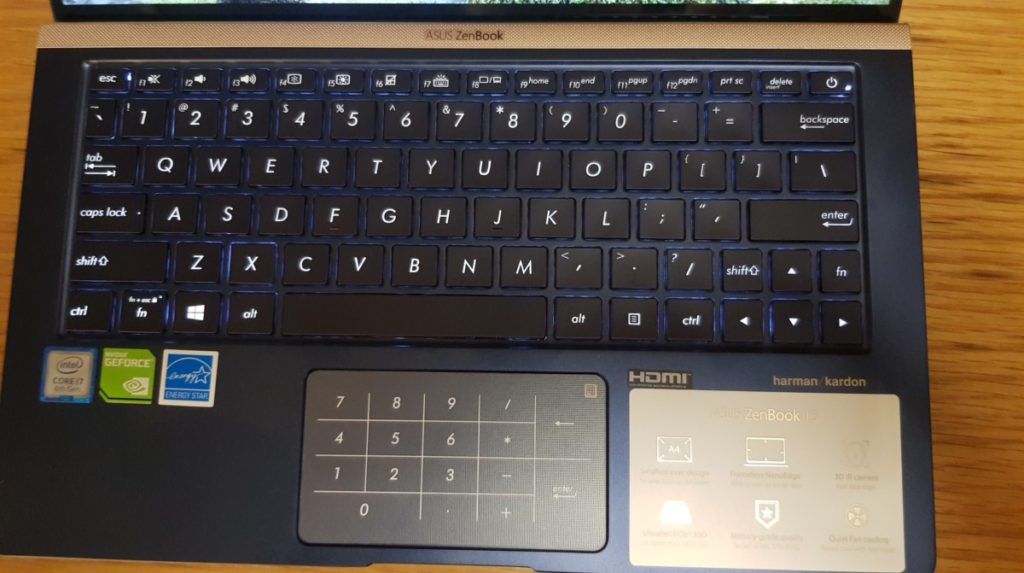 The unique numeric touchpad however proves rather finicky. The concept looks innovative on paper. By default, the whole affair is a normal touchpad but tap a button in the corner and the keypad lights up, allowing you to punch in numbers like a full sized keypad. Turn it off and it works like a regular touchpad. It’s a novel compromise but there’s little tactile feedback when you punch a number button, leading to double tapping and the occasional typo. Odds are you likely won’t be using it very often unless you’re a prolific spreadsheet user.

Given a standard work scenario of web browsing, working through documents on Google docs and Microsoft word along with an hour or so of Netflix on the side with average screen brightness, WiFi on and no gaming, the ZenBook UX333 managed about six or so hours on its 50Wh battery which is about enough to get you through a flight or a short day out in the field. You’ll get less mileage if you start engaging in something more demanding like gaming which is, in any case, outside of the use case of this laptop but it’s certainly possible with some compromises. 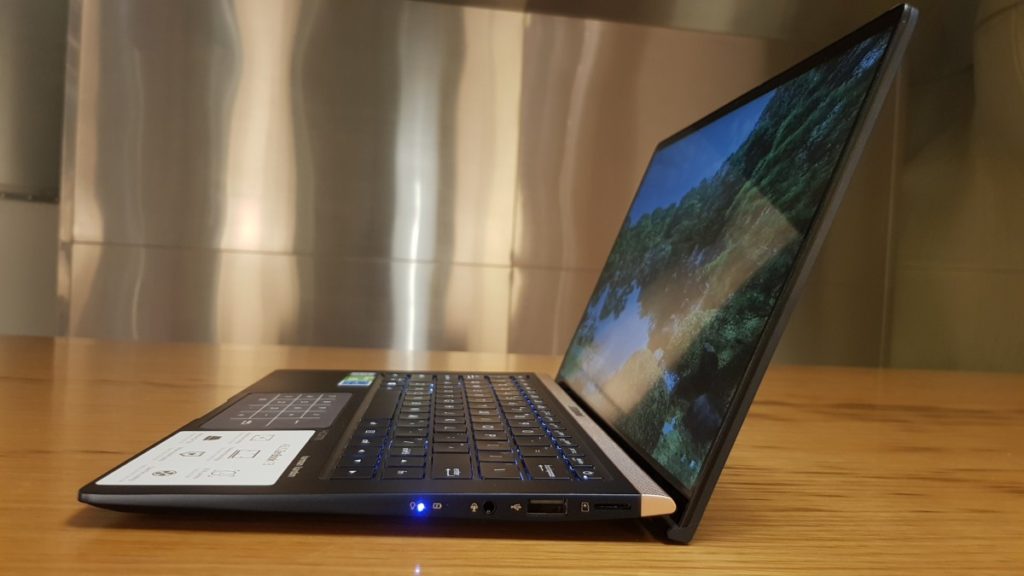 As far as price is concerned, this particular configuration is a tad on the high end of the price scale for what it offers at RM4,999 but you pay a premium on its exceptional portability. Alternatively, you can shave RM500 off if you opt for the cheaper Intel Core i5-8265U equipped variant.

As it stands, this is one of the most powerful, compact ultrabooks currently available with a form factor smaller than a sheet of A4 paper while still packing a discrete graphics solution and a 13.3-inch display too. There are some quibbles, of course, like middling battery life and the numeric touchpad could do with some refinement but these aren’t exactly deal breakers. If you prioritise portability and performance, the exceptionally compact ZenBook UX333 won’t let you down.

What we liked – Exceptional build quality, excellent display, good specifications, responsive keyboard, compact and highly portable design
What we didn’t – finicky touchpad, modest battery life
What we say Sized smaller than a sheet of foolscap paper, the ZenBook 13 UX333 is one of the smallest and most powerful notebooks in its class with beautiful design, a great display and an excellent keyboard with several novel enhancements that aim to maximise utility like its overlaid numeric touchpad. Add in its ultra compact form factor and you have a winner.