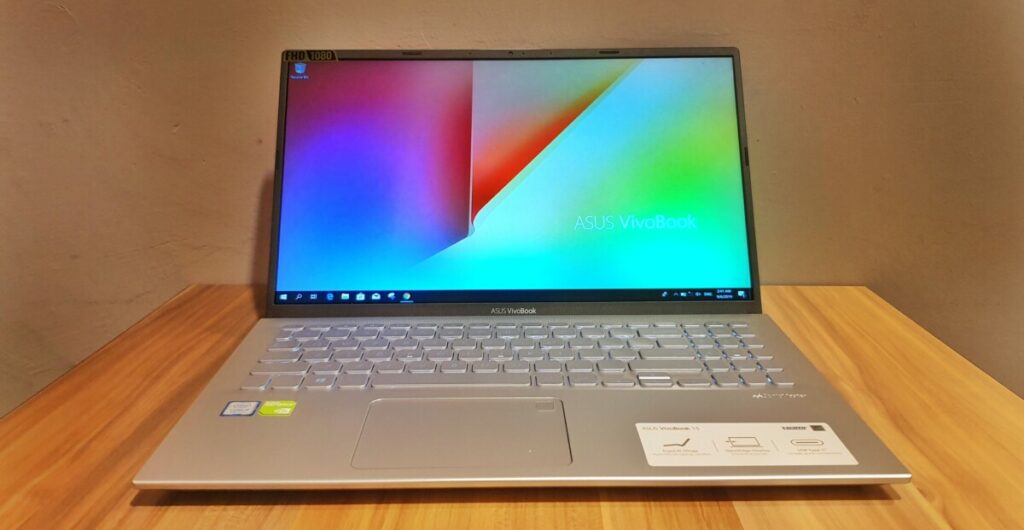 Asus is on a roll of late after Computex 2019 with their most recent offering being this highly affordable new addition to their VivoBook line dubbed the VivoBook Ultra A512 that comes in your choice of either AMD Ryzen 5 series processors or mainstream 8th Gen Intel Core processors. In the case of our review unit, it came with the latter processor running under the hood.

Externally the Asus VivoBook Ultra A512 comes in four different colours ranging from a dark blue to a more gaudy burnt orange red though our review unit came in a more conventional gunmetal silver all around. What makes the notebook appealing is that it comes with a large 15.6-inch 1080P NanoEdge display, an 8th Gen Intel Core i5 processor and a 512GB PCIe SSD for under RM3,000 which is quite an achievement. 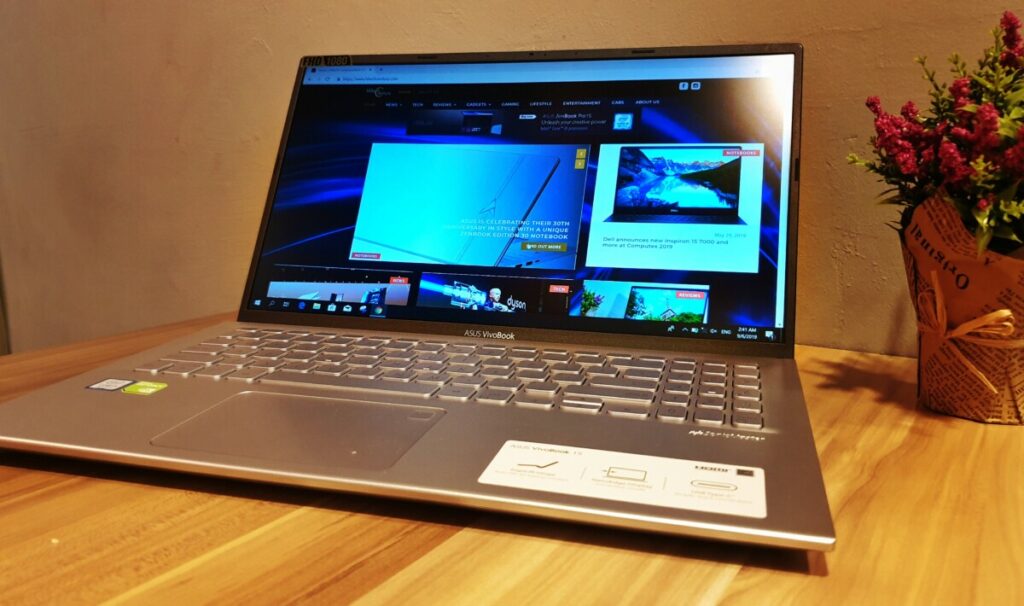 To keep the A512 within its price bracket, Asus has opted for an all polycarbonate build that looks somewhat high street and chunky though on the bright side is it’s rather light despite its ostensible size and girth at 1.6kg. It is also available with similar specifications though it has a smaller 14-inch 1080P display called the VivoBook Ultra A412

The top lid is also hewn from polycarbonate with the Asus logo emblazoned on the top with a fingerprint resistant finish but it’s somewhat prone to scratches so some care is needed to ensure it remains free of nicks. Fortunately the VivoBook Ultra A512 proves to be remarkably sturdy and the top lid has no flex or give. 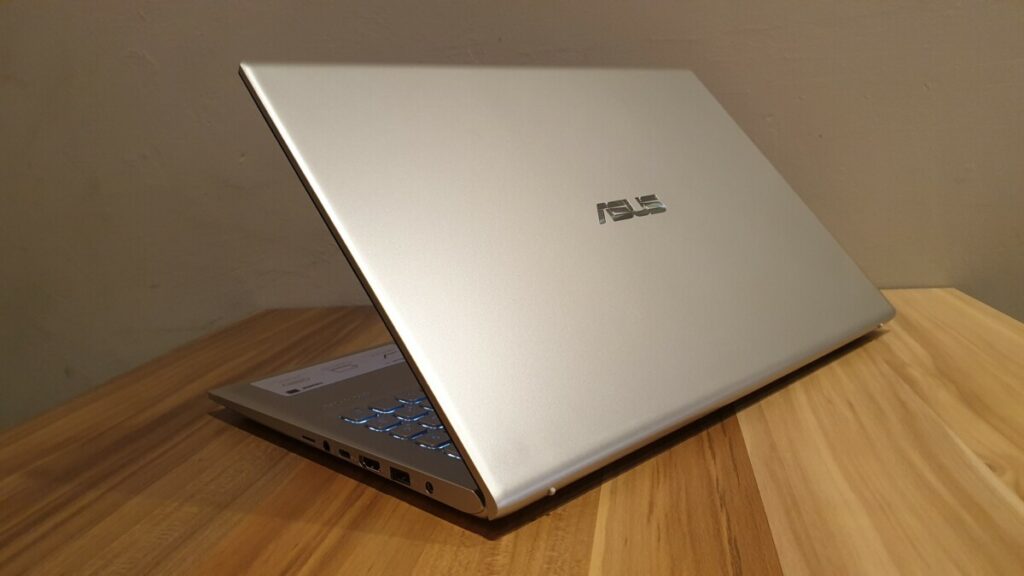 The Ultra A512 also sports an ErgoLift hinge mechanism culled from prior examples in the VivoBook series that raises the bottom slightly to offer a more comfortable typing experience while offering more ventilation by exposing the underside ventilation grilles.

This ingenious bit of engineering also helps to raise the VivoBook Ultra A512’s 15.6-inch Full HD NanoEdge display to a comfortable viewing angle. The hinge mechanism proved remarkably sturdy with no wobble whatsoever which is quite an achievement for a notebook in this price range.

This time around, Asus has minimised the bezels on the display even further compared to its predecessors, shaving the side bezels down to 5.7mm and the top bezel down to 8.8mm from the previous generation VivoBook 14 which had slightly chunkier 7.8mm side bezels and a 14.63mm top bezel. Shaving down the bezels means that the VivoBook Ultra A512 has a larger 87% screen-to-body ratio versus its predecessor’s 77%. 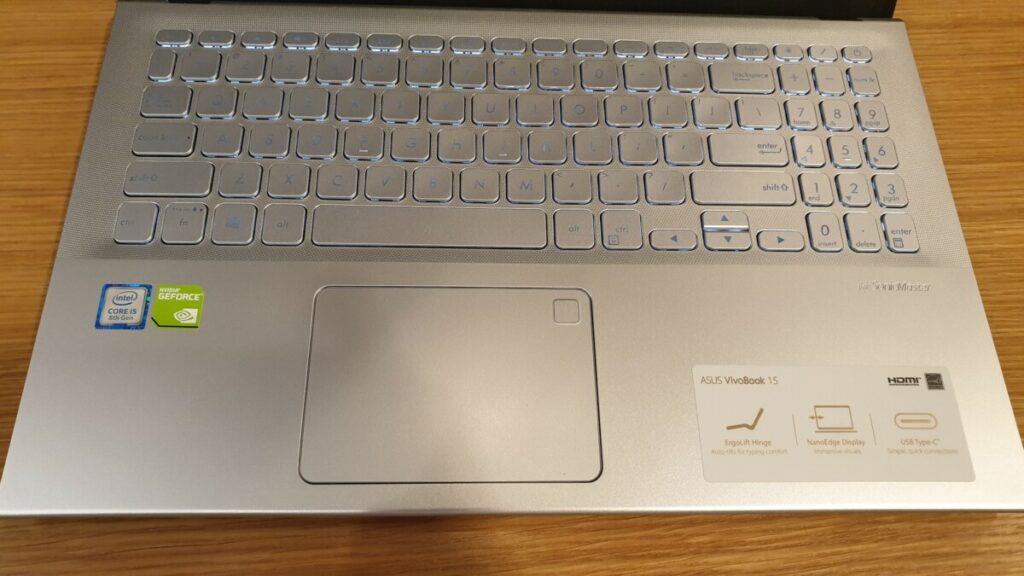 One of the most crucial features that makes or breaks a notebook is the quality of its keyboard and fortunately the Vivobook Ultra A512 has it where it counts as it features a full sized setup that has a numeric keypad with every button featuring 1.4mm key travel. To aid usage under low light, the keyboard also has three-stage white hued backlighting.

In terms of ports, Asus has kitted the notebook out with quite a diverse selection. The right side of the A512 comes with a microSD card reader, a 3.5mm audio jack, the aforementioned USB 3.1 Type-C port, a USB 3.1 Type-A port and an HDMI 1.4 port. The left side hosts pair of USB 2.0 Type-A ports. This ensemble covers most eventualities that a PC user would encounter.

Plasticky chassis aside, the Asus VivoBook Ultra A512 belies appearances with a very sturdy chassis that aims to put your money where it counts – in its specifications and performance.

In Malaysia, the Asus VivoBook Ultra A512 comes with an 8th generation Intel Core i5 8265U processor that is built on a 14nm process. This is paired with one stick of 4GB DDR4 RAM with a spare SODIMM slot available and the option to upgrade total RAM to 16GB.

On the graphics front, the notebook has Intel UHD Graphics 620 integrated graphics and an entry-level NVIDIA GeForce MX250 graphics card with 2GB GDDR5 memory. Storage needs are sorted out by a 512GB PCIe solid state drive which has about 475GB of effective usable memory minus the space taken up by Windows 10. 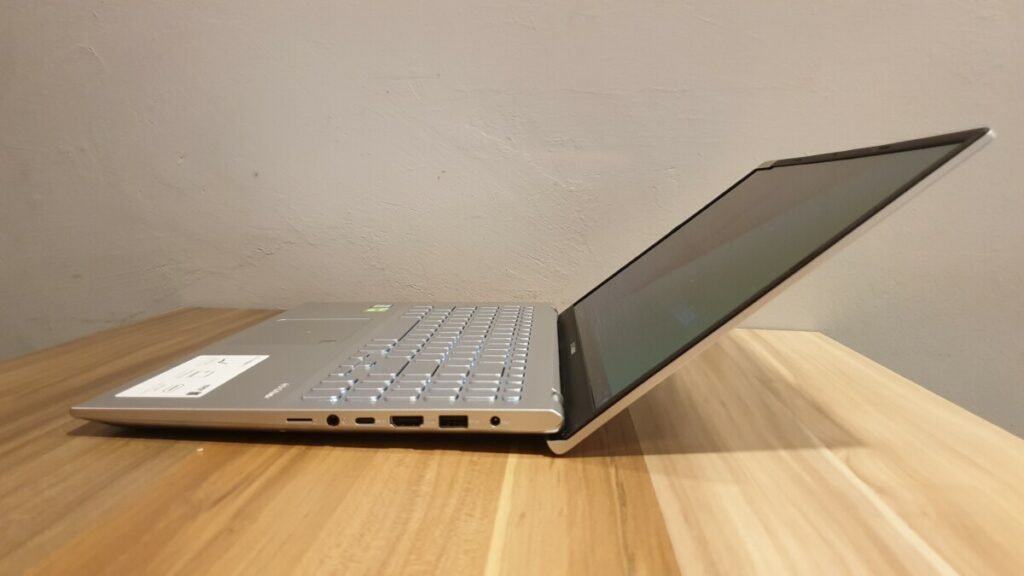 On paper, theVivoBook Ultra A512 has a solid performing processor but has a dearth of RAM, presumably to keep the costs down though it’s something that can be corrected easily. At the very least, users should get another 4GB of RAM though maxing it out to 16GB RAM is recommended. The provided NVIDIA MX250 is built on a 14nm FinFET process and the Pascal architecture akin to the older MX150, featuring improved clock speeds akin to its older sibling.

While a lower powered 10W version exists, the Ultra A512 fortunately comes with the standard 25W powered version. This grants it the ability to play most last-gen games from the early 2000’s though decent gaming is bottlenecked by the 4GB RAM that comes by default with the notebook.

In CineBench R20, it snagged a score of 1,223cb. In terms of read/write speeds, the notebook snagged some decent scores on CrystalDisk Mark, with 1596.5 MB/s read and 1031.6MB/s in write speeds on the PCIe SSD. 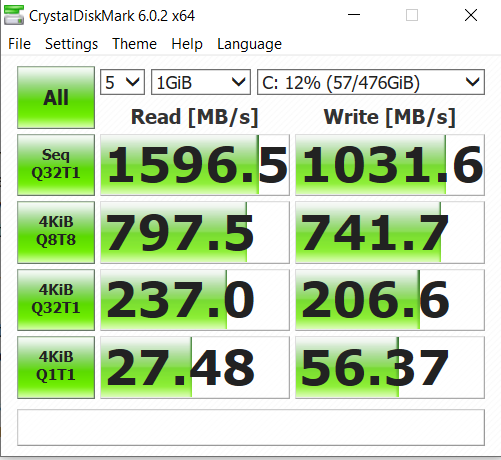 Under practical conditions, the VivoBook Ultra A512 handled a good dozen plus open browsers without flagging along with combinations of streamed Netflix and YouTube in a window. It managed to handle several open spreadsheets on Google Sheets and several open documents in Google Docs and Microsoft Office as well without any lag.

Last gen gaming on the notebook was relatively pleasant with the likes of Deus Ex: Human Revolution and Starcraft II tackled at 1080P but more demanding games of recent vintage need to be tackled at 720P resolution with most of the settings dialled down.

The display proved to be a delight with vibrant colours and sharp detail, making movie-watching a very pleasant experience indeed though the downward firing speakers aren’t particularly loud with sufficient volume and detail for casual music listening and the odd movie or two. The 1.4mm key travel and the well spaced keys offered an excellent typing experience with us achieving an average of 96wpm while the touchpad was both large and responsive. 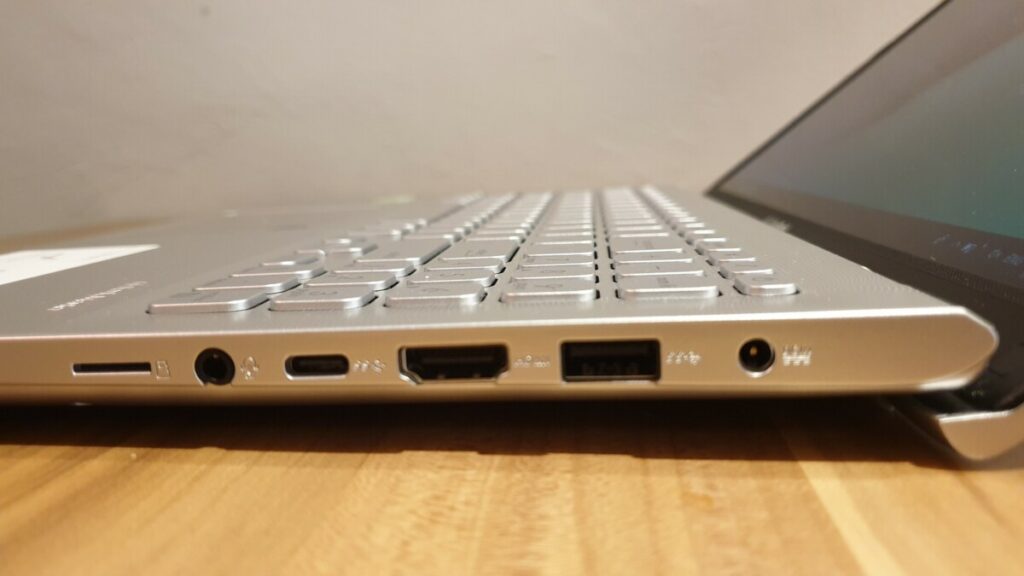 The notebook comes with a 37Wh 2-cell Lithium-polymer battery to keep the lights on. This is markedly less than last year’s VivoBook S15 S530U that we tested a while back which had a 42Wh 3-cell Lithium-prismatic battery. With a full charge, the VivoBook Ultra A512 is rated to theoretically last about five or so hours before going dry.

Under practical conditions and with the settings calibrated to maximum Battery Saving mode, the notebook only managed to last under four hours with WiFi on, liberal use of social media, a streamed video or two and less than half an hour of gaming. Unfortunately, battery life is one of the major corners cut for the notebook to achieve its modest price tag and its endurance makes it only suitable for short work meetings away from the mains. If you prioritise battery life over other concerns and mostly perform paperwork, the Asus VivoBook Ultra K403 may be a more viable prospect as it has significantly longer battery life that can stretch nigh unto a day. 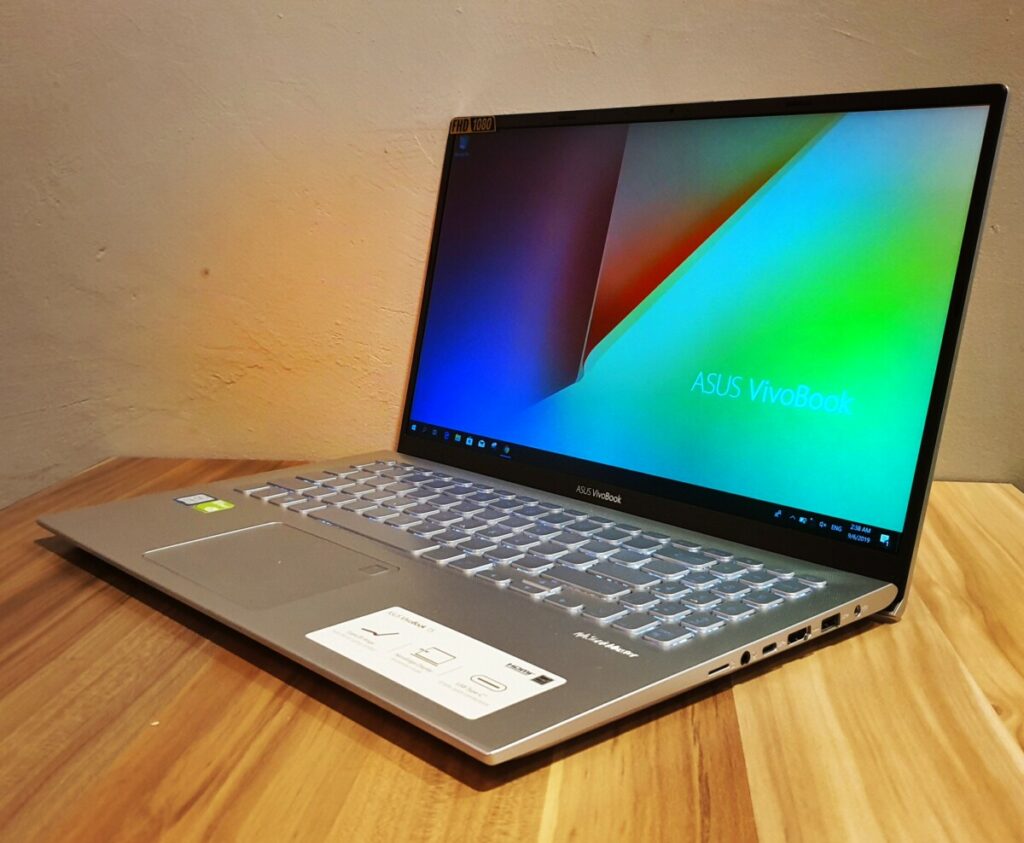 As it stands, the Asus VivoBook Ultra A512 fulfills its aspirations of being an affordable workhorse notebook and features an excellent display and a decent processor though this is tempered by the need for more RAM, a plasticky chassis and middling battery life. If you are on the hunt for an affordable workhorse notebook that costs less than RM3,000 and can live with its modest foibles, the VivoBook Ultra A512 is right up your alley.

What we liked Vibrant and crisp display, decent performance, comfy keyboard
What we didn’t plasticky chassis, middling battery life
We say A highly affordable all-rounder notebook with a good display, a full sized keyboard and solid performance for what you pay for though the plasticky chassis may deter more stylishly oriented owners.