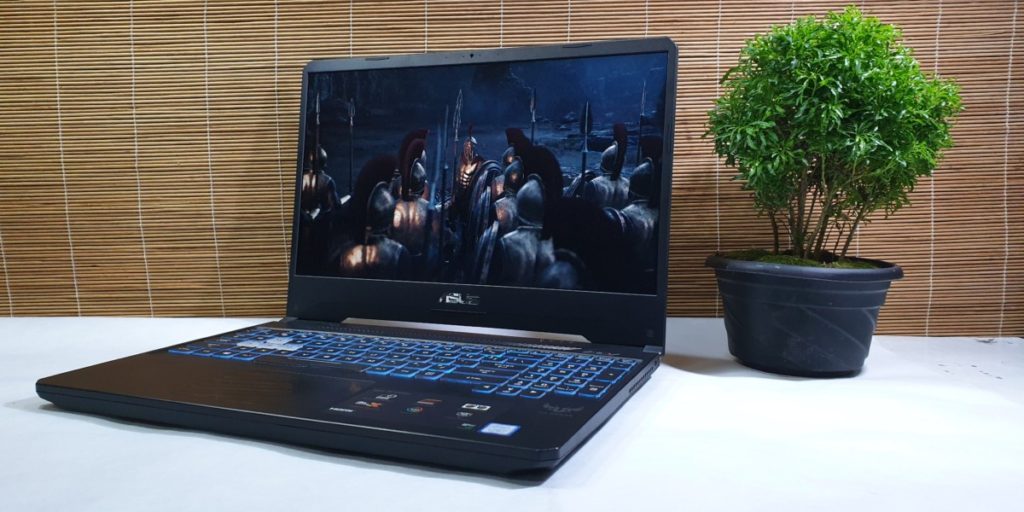 As part of their TUF line-up of gaming notebooks, the Asus FX505 epitomises the ideals of the line as it’s not only affordable, with entry-level specced units retailing from RM3,699 and up but capping out to about RM5,000, but it is also inordinately durable as well with a MIL STD 810G durability rating, allowing them to survive damage that would turn a less resilient notebook into kibble.

Externally, the ASUS FX505 strikes a look that is both milspec chic and which is also unmistakably Asus issued. Our test unit consists of a matte, non-reflective black finish all around and a gunmetal gray top lid which has a series of aesthetic grooves forming an X-shape with the Asus logo emblazoned in the middle that glows with gold backlighting when activated. 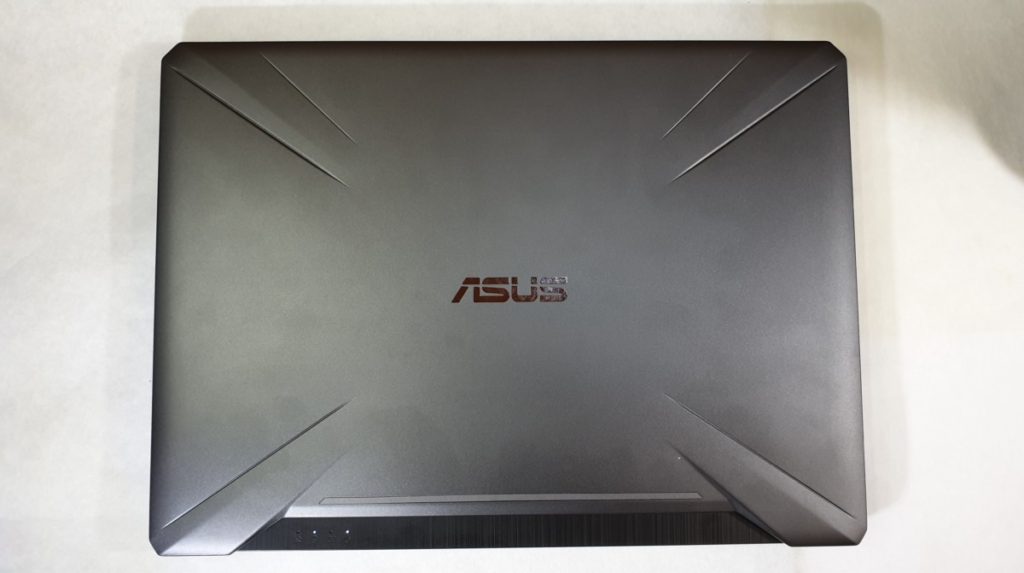 What is especially pleasing here is that Asus has kept the RGB lighting frippery to a minimum and concentrated on the important stuff – namely ensuring that the casing is both hard-wearing, and durable in equal measure. Unlike many other competing notebooks, the FX505’s matte finish resists fingerprints exceptionally well. The fact that it can survive a grown man jumping on it a couple of times is icing on the cake.

If you look closer, the FX505 also optimises other aspects of its design to cater to gamers. Rather than the usual ergonomic mess, the notebook concentrates all its ports on the left side of the notebook with a power charging port, an Ethernet port, a HDMI port and a trio of USB Ports along with an audio jack, leaving the right side open for a mouse to roam unimpeded. Unfortunately, the ports are clustered quite tightly together, which makes plugging in peripherals a bit of a bother. The right side is otherwise bare bar a Kensington Lock while the back of the notebook primarily consists of vent cutouts to facilitate cooling. 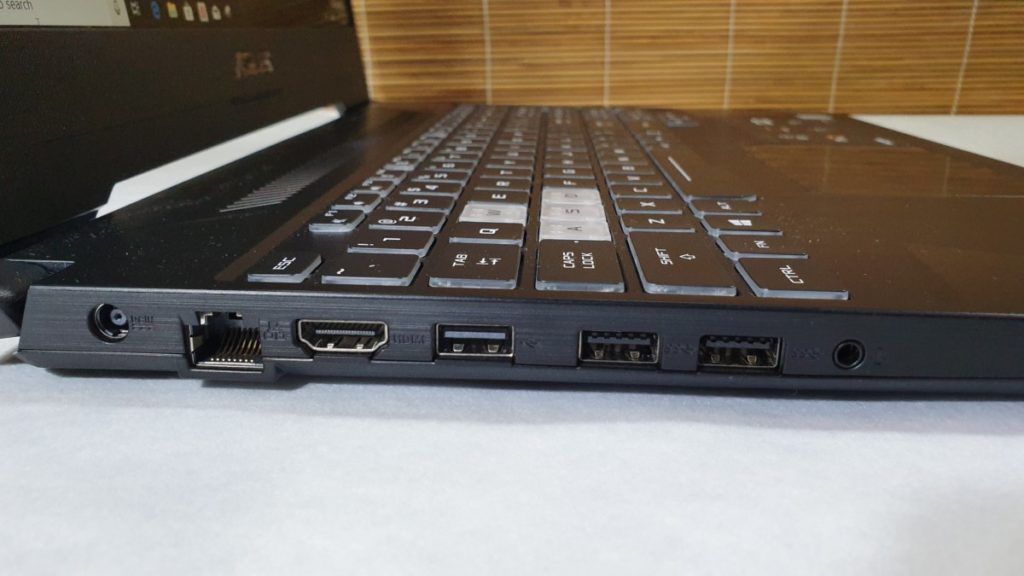 The base of the notebook holds a series of additional ventilation ports as well as the usual quartet of rubber pads to keep it from sliding off a table when in use.

Flip the lid open and you’re greeted by the full-sized backlit keyboard which has a numeric keypad as well as a quaintly positioned direction pad offset slightly south from the main keyboard array. Unfortunately, this results in a rather cramped layout though this is hardly an issue for gamers who are reliant on a dozen keys at most. According to Asus, each key is rated to survive over 20 million key presses, which in practical terms should be the contents of War & Peace several times over. 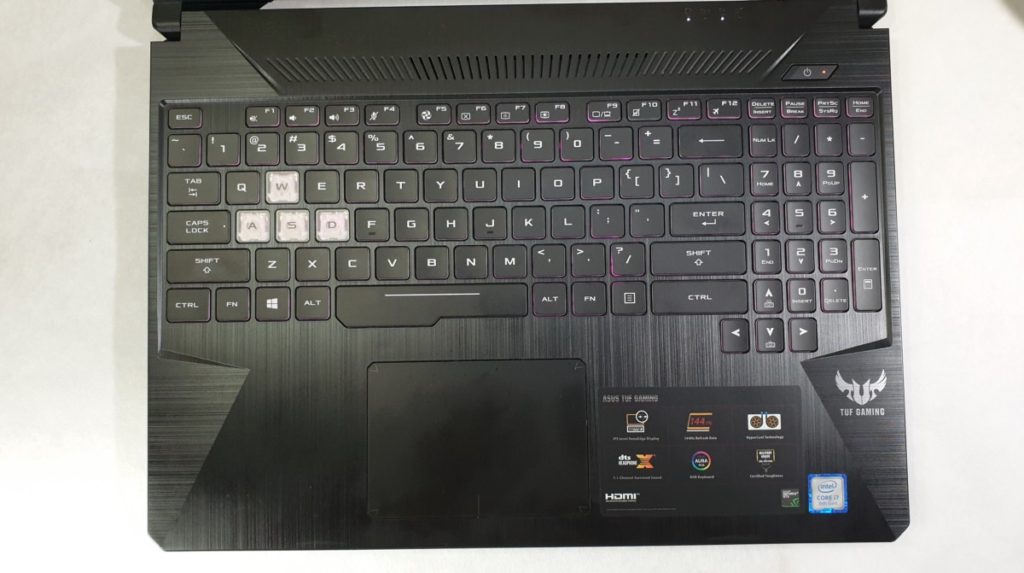 The W, S, A and D keys are differently marked from the rest of the keys with transparent keycaps and the whole affair also has full asssignable RGB backlighting albeit with just a single zone so all you get is essentially one colour at a time displayed across the entirety of the keyboard.

The 15.6-inch NanoEdge 1080P display is a thing of beauty with a matte finish that makes it ideal for indoors use while boasting of exceptionally slim bezels along every edge save the bottom. 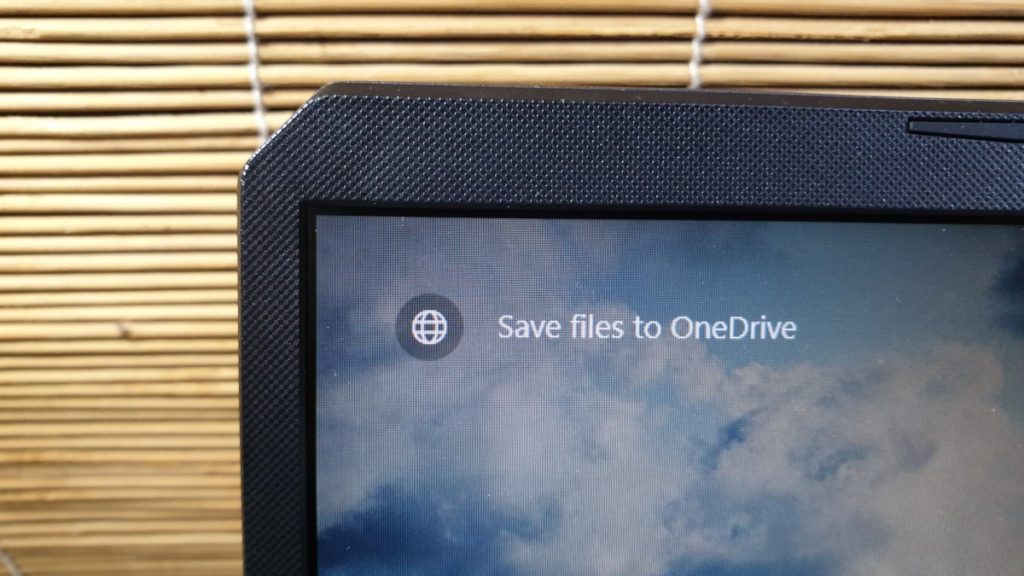 Perhaps as an inside joke, the outward corners on each edge of the bezel framing the notebook are cut, which lends the FX505 a unique angular silhouette. The panel itself is ideal for FPS gamers as it also sports a 144Hz refresh rate on top of the added bonus of 100% reproduction of the sRGB colour gamut for colour accurate visuals when gaming.

The FX505’s understated and practical design is breath of fresh air amidst a plethora of notebooks that boast so much bling and RGB lighting that they end up as garishly gaudy displays rather than an effective means to trounce the competition and hopefully Asus continues and extends this design language to their other notebooks as well. 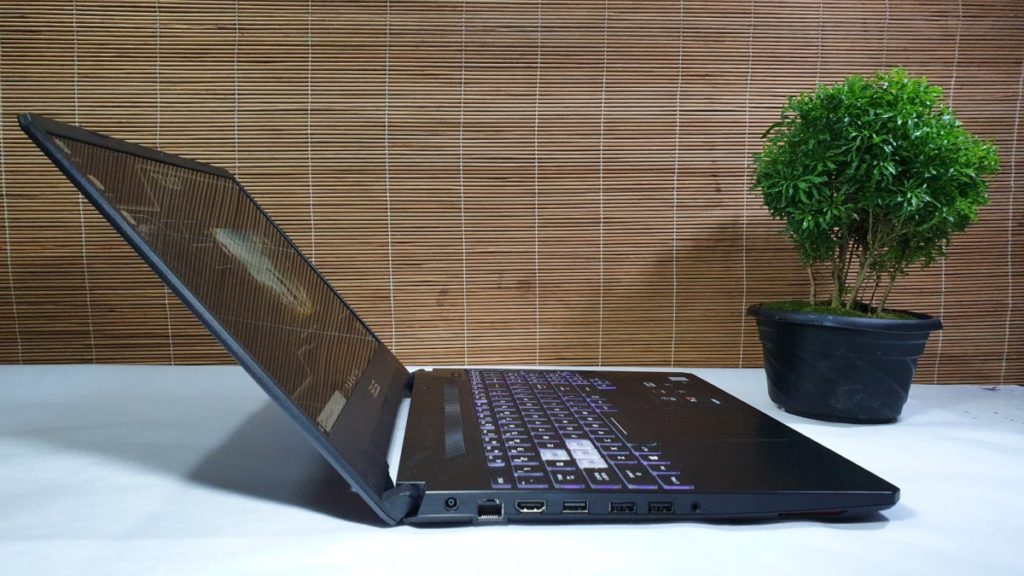 The Asus FX505 comes in a variety of configurations for the Malaysia market though our test unit is one of the better specced ones with an 8th generation Intel Core i7-8750H 2.2GHz processor paired up with 8GB DDR4 RAM, a 128GB PCIe Gen3 SSD along with a secondary 1TB 7,200rpm hard disk for storage as well as an NVIDIA GeForce GTX1060 graphics card. It’s not exactly the bleeding edge of gaming but this hardware setup is more than sufficient to handle every current gen game thrown at it in a playable fashion.

In terms of benchmarks, the FX505 proved competent indeed as a gaming rig. CrystalDiskMark served up respectable read/write speeds for the primary PCIe Gen3 SSD, which facilitated fast boot-ups while the secondary 1TB hard disk was well within the norm for others of its ilk. 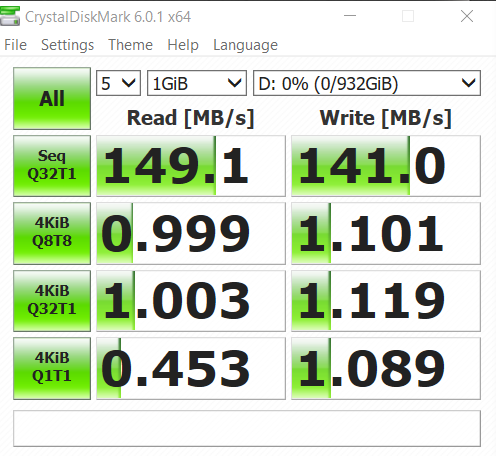 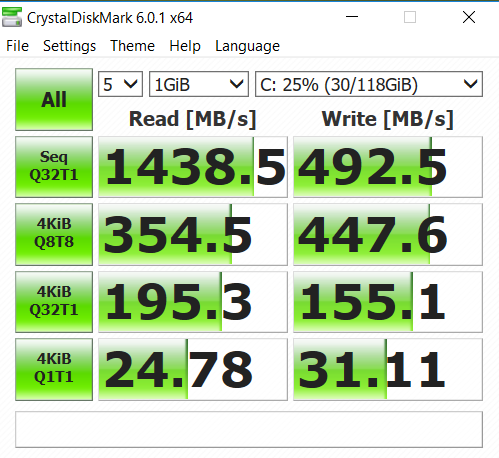 In PCMark, the FX505 got a decent score of 3,469. In CineBench R15, it got an OpenGL rating of 82.05fps and 1058cb for the CPU. In 3DMark’s Fire Strike Ultra, it got a score of 982 while in Time Spy it garnered a score of 3,822. We even put it through the ringer through one of the most graphically demanding games available today, Assassin’s Creed Odyssey through its internal benchmark with Very High graphic quality at 1080P where it got an average of 33fps.

In practical field tests, we subjected it to Player Unknown: Battleground where the fast 144MHz refresh rate and solid hardware performance proved to be a boon with the fast pace of the game. While our kill/death ratio towards a chicken dinner remained predictably dismal, it was nonetheless an enjoyable experience with the colours looking suitably delightful onscreen.

On the audio front, the notebook’s speakers did not disappoint with sufficient volume and clarity to wandering through the beautiful melodies of Far Cry 5’s folk music as well as the booming staccato report of small arms fire. Joanna Wang’s dulcet sweet voice across a selection of her work were also rendered due justice. Where it fares less well is on more subtle orchestral tracks but that’s hardly an issue seeing the intended purpose of the FX505 as a gaming notebook.

Even after a good five or so hours of intensive gaming, the FX505 ran relatively cool though its rear cooling fans proved rather audible with a low-pitched whirring sound especially during quiet lulls in a gaming session. Fortunately, during otherwise non-intensive work like web browsing, paperwork and the like, the FX505 was relatively silent.

The FX505’s keyboard proved ideal for gaming with a crisp responsiveness that lends it well towards playing FPS games though it proved less than ideal for typing out long tracts on account of the somewhat unorthodox, cramped layout that resulted in a marked number of typos even after field testing with other users. 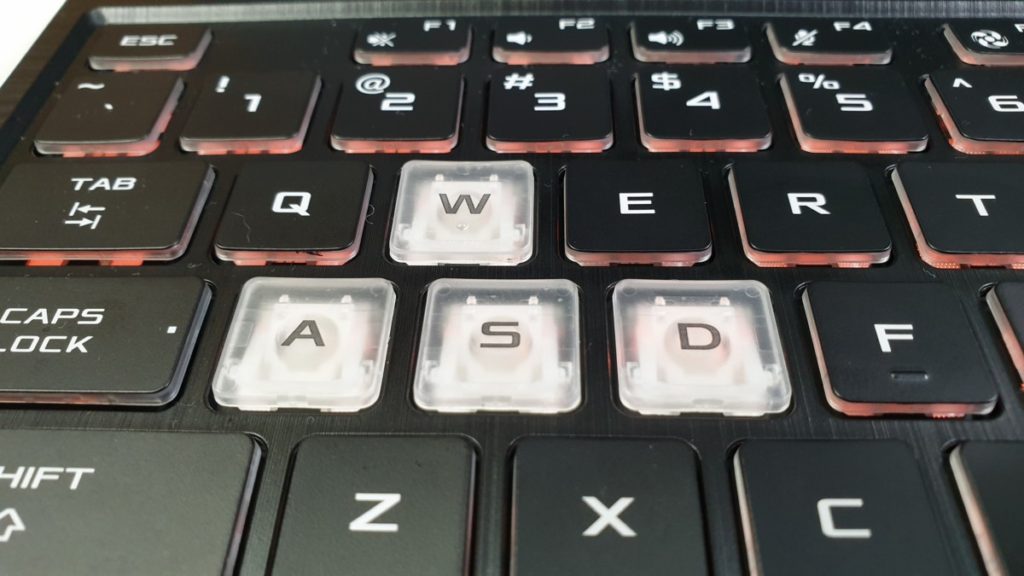 In keeping with its contemporaries, the Asus FX505 has middling to poor battery life . Away from the mains, the notebook has about three hours of viable gaming time before you need to hunt for a power plug. The fact that the power pack is a chunky, heavy affair makes porting it around a logistical challenge indeed.

As it stands, the Asus TUF FX505 ticks all the right check boxes for a gaming laptop intended for enthusiasts. Granted, there are some quibbles like a dearth of ports, all of which are tightly clustered together along with a cramped keyboard but they the FX505’s benefits outweigh its downside. It offers a great display, a solid array of hardware complemented by an otherwise excellent cooling array and solid build quality while ditching non essential frippery like gaudy multi-zone RGB lighting to keep the price just slightly north of RM5,000.

What we liked Impressively sturdy build quality, excellent hardware for price, responsive keyboard, great 144Hz matte Nano-edge display
What we didn’t Keyboard layout is a bit cramped, more ports would have been welcome, modest battery life
We Say The Asus FX505 hits that elusive sweet spot of performance versus price with enough pixel crunching power for enthusiast gamers to viscerally enjoy the latest AAA titles while offering an impressively durable casing to make it one of the best gaming notebooks of its class 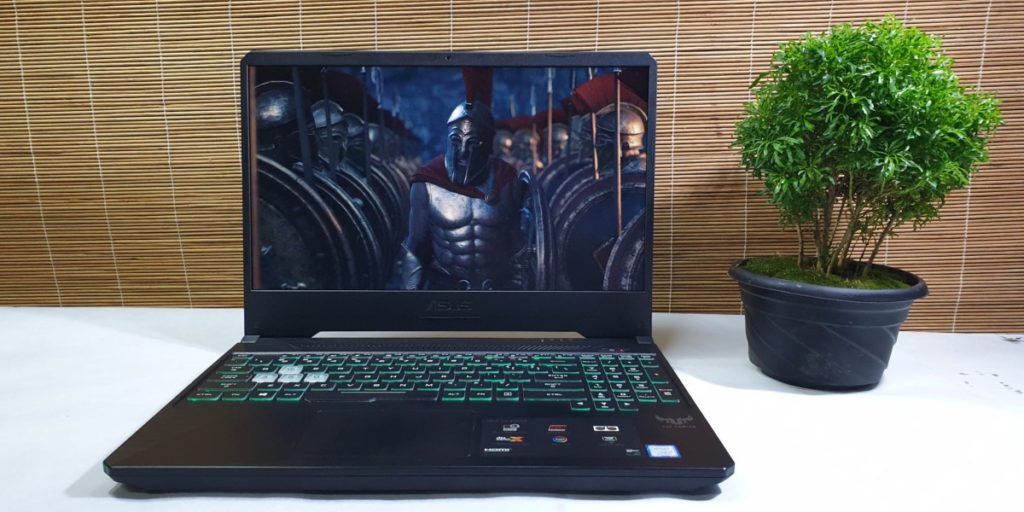