Mention Assassin’s Creed to any gamer and they’ll likely conjure images of a lineage of hooded hitmen with the ability to parkour and a predilection for razor sharp cutlery.

Assassin’s Creed Odyssey is the latest addition to the Assassin’s Creed series that embraces elements of what its forebears offer but strikes its own bold path to become less of a game of offing nasty Templars and – in a first for the series – more of an RPG that involves exploring and making your mark on the richly realised world of ancient Greece. 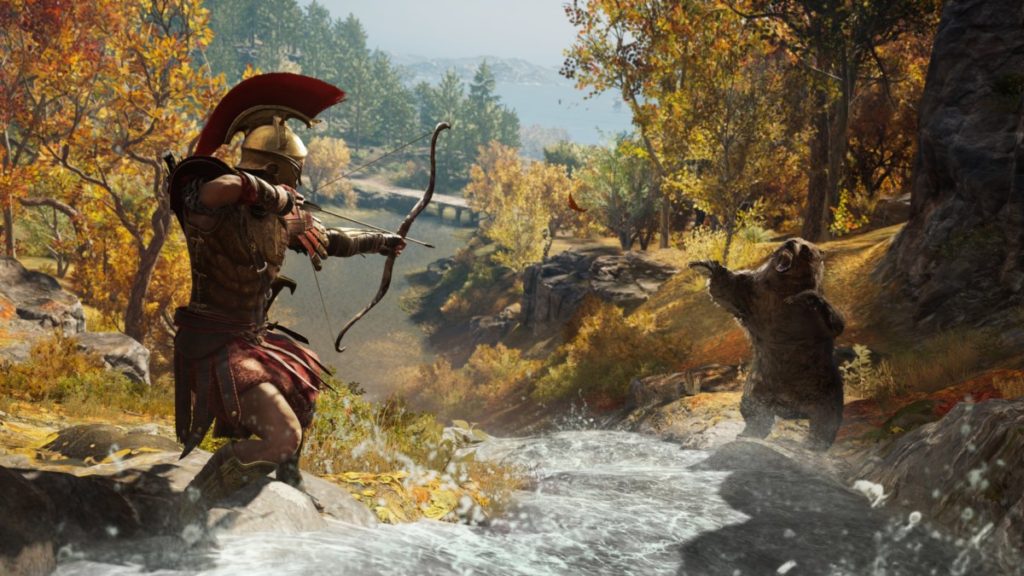 Every story has a beginning and in the case of Assassin’s Creed Odyssey it’s a tutorial mission that takes place in medias res as you temporarily play the infamous King Leonidas at the battle of Thermopylae.

This tutorial mission is where you learn the ropes of how to kebab and generally beat the living snot out of your enemies while avoiding incoming pointy bits of metal. It’s short, fun and entertaining and you’ll master one of the most useful moves ever in the game – a hearty Sparta Kick that can send enemies plummeting to their doom if you have a convenient cliff nearby.

Once you’ve played the battle to its predictable conclusion, you’re temporarily railroaded to selecting the gender of your alter ego – be it as suave and bearded Aleksios or the rather Amazonian looking Kassandra. This is a step up from previous outings in the series as they usually have you stuck to one protagonist who is almost inevitably male. Once that’s sorted out, you’re thrown into the beginnings of the Peloponnesian War between the city-states of Athens and Sparta as an neophyte mercenary, dubbed in Greek parlance as the Misthios. 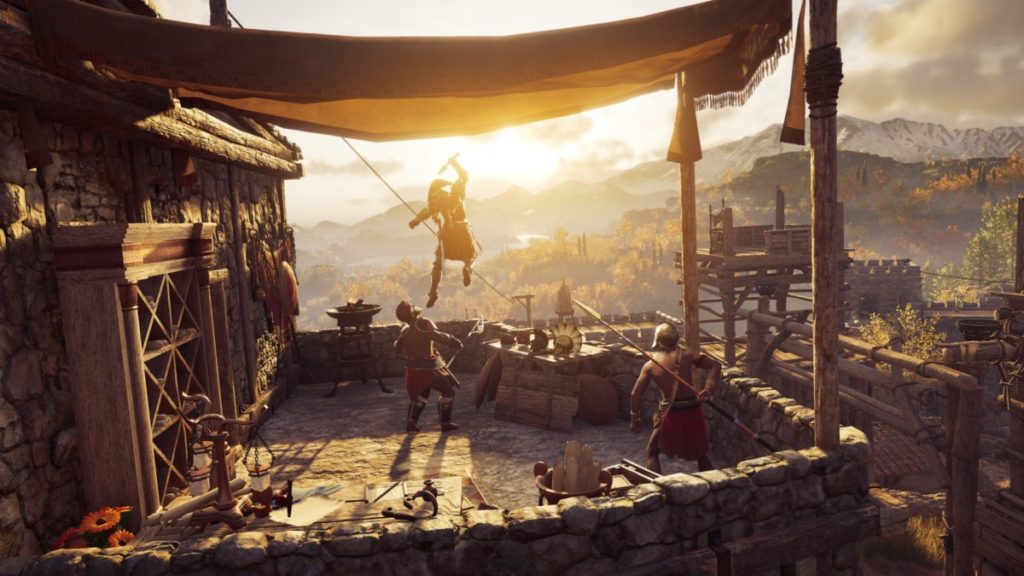 The initial tutorial island of Kephallonia gives you a bit more exposure to the game mechanics but from there on in, you’re on your own with the freedom to explore a good chunk of the ancient Greek world at your own pace.

A world of possibilities…

The moment you’re finished learning the ropes, you are let loose into a massive sandbox of a world to explore that comprises a good chunk of the Aegean sea. The scope, the size and scale of the map is staggering  with miles and miles of terrain to explore on foot and that’s not even getting into the possibility of embarking on an ocean voyage along with naval battles on an authentic Hellenic-era ship.

Since there’s no Grab or Uber to rely on, you can call upon the services of a horse to get about large areas of the map though this time around, your horse is smart enough to follow roads like an equine cruise control of sorts until you reach your destination. Since you lack Google Maps, the game allows you to call in a pet eagle that acts as an aerial recon drone for you to point out targets and get the lay of the land. 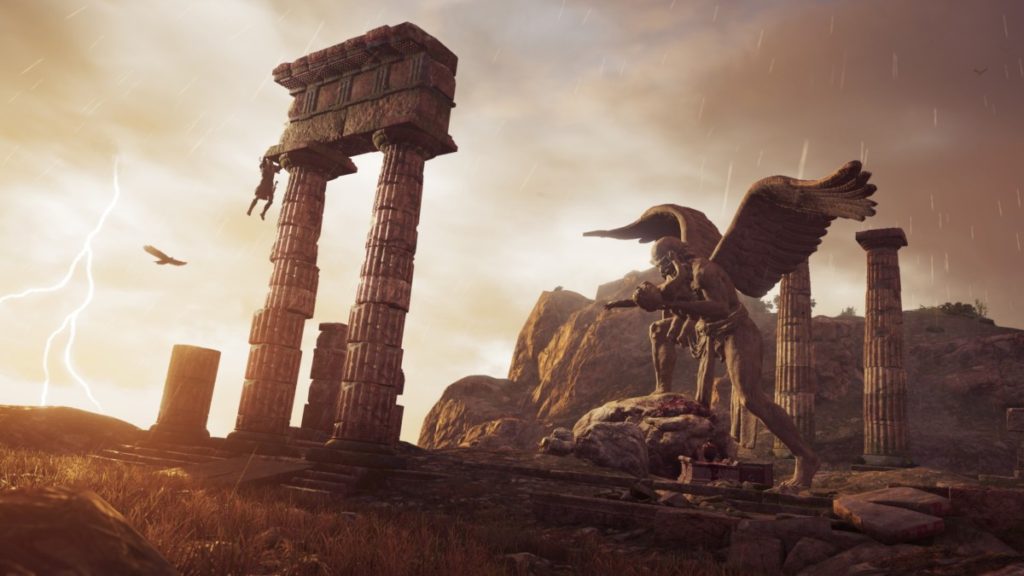 Like many other RPG systems, there’s a ton of quest givers scattered across the map and even when you’re enroute to another objective, you’ll encounter new locations and new quests strewn about your path. Even in the starting island, where you are initially tasked to rescue a kidnapped boy from bandits, you’re already offered a side quest to investigate dodgy happenings in a shrine and before you know it you already have a dozen interesting side quests to investigate at your leisure..

Just to keep things interesting, the game adds a sense of urgency with a notoriety system of sorts. As you grow in power and butt heads with the right (or wrong)  people, you’ll inevitably start making enemies who will put out bounties on you that hordes of procedurally created mercenaries will aim to collect on and which wander the map out for your head on a silver platter. These mercenaries pack quite a punch and defeating them adds a sense of achievement that you’re moving up the rungs of power.

There’s also another metagame that you can participate in when you’re higher up the totem pole of power as a Misthios where you get to support either Sparta or Athens in a Nation Conquest metagame by destabilising regions for your chosen side by destroying enemy forts, performing acts of arson and wiping out their officers. This mode does give you a sense of power and achievement the first few times you run through it but there’s little meaningful outcome to whether either side wins or not, which is somewhat indicative of real world geopolitics but you’ll still be doing it for the most part to farm high end loot.

What is truly impressive here is the amount of research put into creating the game and the Odyssey is chock full of famous Greek personalities. Assuming you’ve paid attention in history class, you’ll come across and rub shoulders with the ancient Greek equivalent of rock stars like Socrates, Euripides and Pericles on your journey. You’ll also get to visit historical locations that include Ithaca, the Odeon of Athens and more. Even if you’re not following the main quest, it is equally rewarding to just wander the map to sightsee and simply admire the amazing world that they’ve crafted for you to explore in Odyssey.

While a good many quests are relatively peaceful in nature, most quests eventually devolve into armed altercations which is where you have a veritable arsenal of skills to unleash on hostiles that cross your path.

A particular set of skills…

As the Misthios, you are armed with a particular set of skills, skills that make you a nightmare for those that cross your path. Rather than being purely focused solely on stealth tactics, the game lets you level up and invest your skills in  one of three skills trees to master – Hunter, Assassin and Warrior. The Hunter tree gives you better skills in marksmanship and tricks with a bow. The Warrior tree gives you skills and upgrades to straight-up fights while the Assassin tree is for traditionalists and helps you beef up your surprise attacks and stealth abilities.

There’s no right or wrong and all three skill trees have very useful and rewarding skills to master though the most entertaining one remains the aforementioned Sparta Kick which is a homage to the 300 movie as it lets you deliver a very hearty front punt to send anyone a good twenty feet back. If there’s a cliff nearby it’s an effective kill. It’s so powerful (and fun) that you’ll spend a good chunk of the game kicking people off cliffs.

All told, you’re looking at some 60 plus hours of gameplay in Assassin’s Creed Odyssey and that’s just following the main quests without going into any of the other bits. This isn’t even getting into replayability as well with slightly different endings and outcomes if you play either Kassandra or Alexios and the option to scour the rest of the game to take on monsters and legends from Greek myth.

Bar some repetitive bits of grinding for gear, the game is a wonderful experiential masterpiece of game design with a wide, densely packed world that you can explore, tons of quests to explore, gear to acquire and all this is made even more immersive with some pretty darned good voice acting and music. There’s an occasional flub here and there with some odd accents that break the immersion but the game is otherwise spot-on.

Assassin’s Creed Odyssey is a true gaming tour de force with superb production values in every aspect. This game is a very worthy acquisition for any serious gamer’s collection.

What we liked A beautifully realised expansive world, immersive storyline, exceptional replayability
What we didn’t Some grinding needed, occasionally off-target voice acting,
We say This latest addition to the Assassin’s Creed series is a gaming tour de force that hits all the major points of a AAA gaming experience – memorable characters, a beautifully realised world , superb production values, an intricate storyline and exceptionally rewarding gameplay. This is easily the best of the Assassin’s Creed series and one of the best games of 2018.