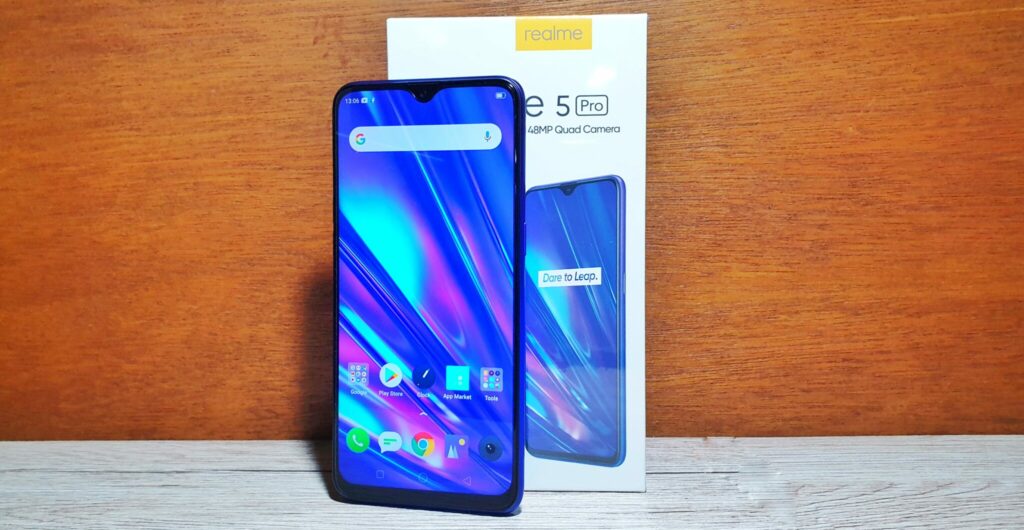 The technological pinnacle of realme’s current generation of smartphones, the realme 5 Pro is the intended successor to the realme 3 Pro released earlier this year and is slated to launch alongside the more affordable realme 5 in Malaysia this October. 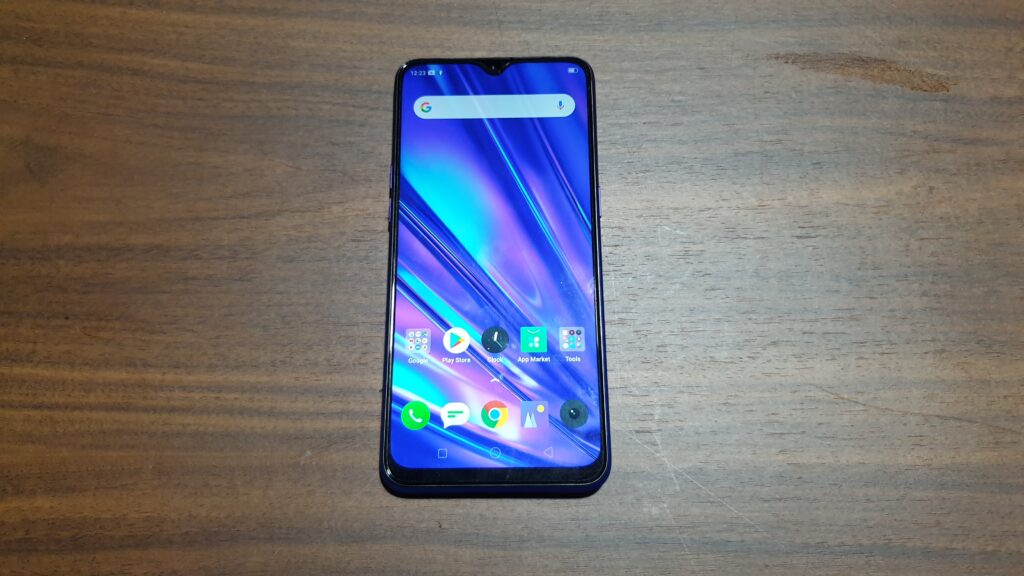 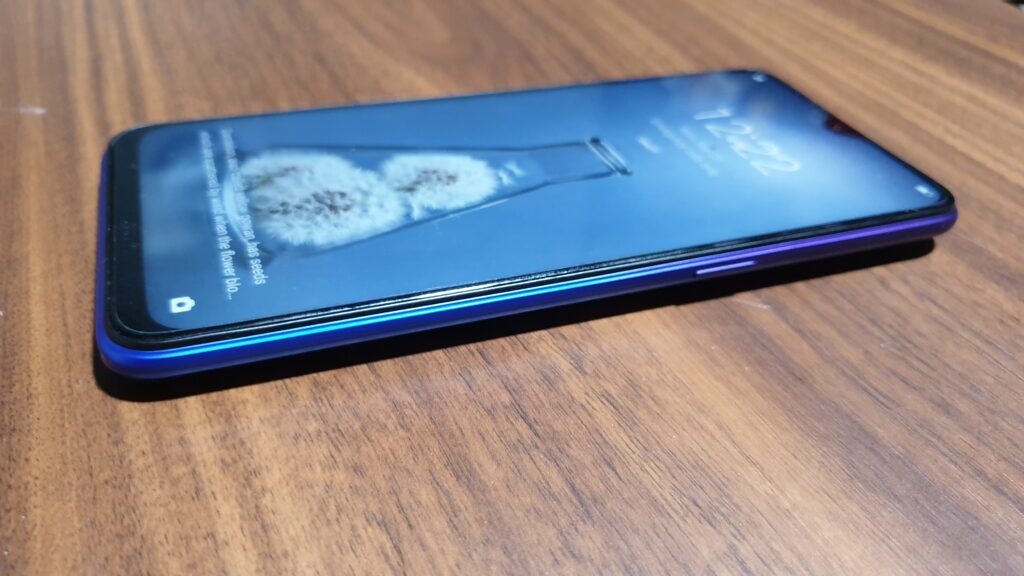 Seeing the usual numerogical avoidance of the number 4, the realme 5 Pro skips a number but is otherwise a refined and enhanced version of the realme 3 Pro with a similar design philosophy of offering the best possible hardware in its price range while keeping the price tag to very affordable levels. In that regard, the realme 5 Pro comes with an impressive array of features for what you pay for.

While we have yet to receive the official price for the realme 5 Pro in Malaysia at the time of writing, the 8GB RAM/128GB variant which we are reviewing which was released in India for RS16,999 translates to just under RM1,000.

Prices in Malaysia will of course vary somewhat from the prices in India based on local taxes and other minutiae but even based off this rough estimate, the realme 5 Pro is well specced for its price range with a large display, an upper midrange Snapdragon 712 series processor, one of the first quad camera arrays ever mounted in a realme phone and a large battery with VOOC fast charging tech thrown in for good measure.

What’s in the box of the realme 5 Pro

The packaging is akin to its generational sibling the realme 5 and consists of a cardboard box layered with the phone and its sundry accessories. Out of the box, the realme 5 Pro brings a fair assortment of kit to the table.

While it lacks the expected pair of headphones, the rest of the kit bundled with the realme 5 Pro are just as, if not more practical. You get a soft TPU casing to protect the phone and most important of all, a VOOC 3.0 20W fast charger along with the compatible cable to go with it indicated by a yellow stripe on the inner portion of the USB port and charger itself. While our test unit comes with a flat twin-prong charging pin, Malaysian units will come with a three-pin UK style charger. 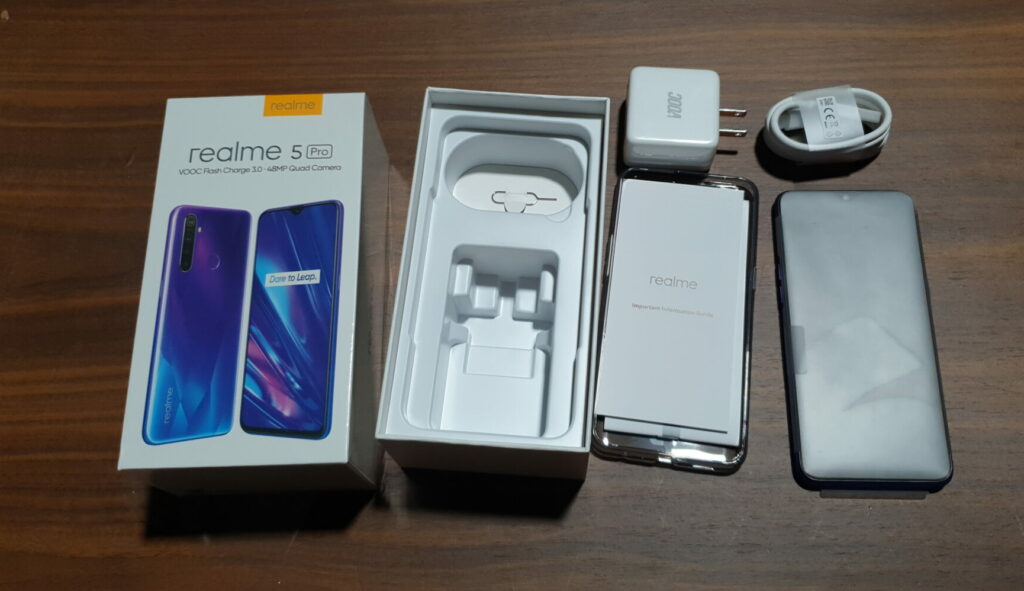 They’ve also gone to the trouble of putting in a pre-applied matte screen protector to the realme 5 Pro. Combined, all this enables you to deploy the phone straight out of the box with a fair modicum of protection while also taking full advantage of its VOOC fast charge capabilities. 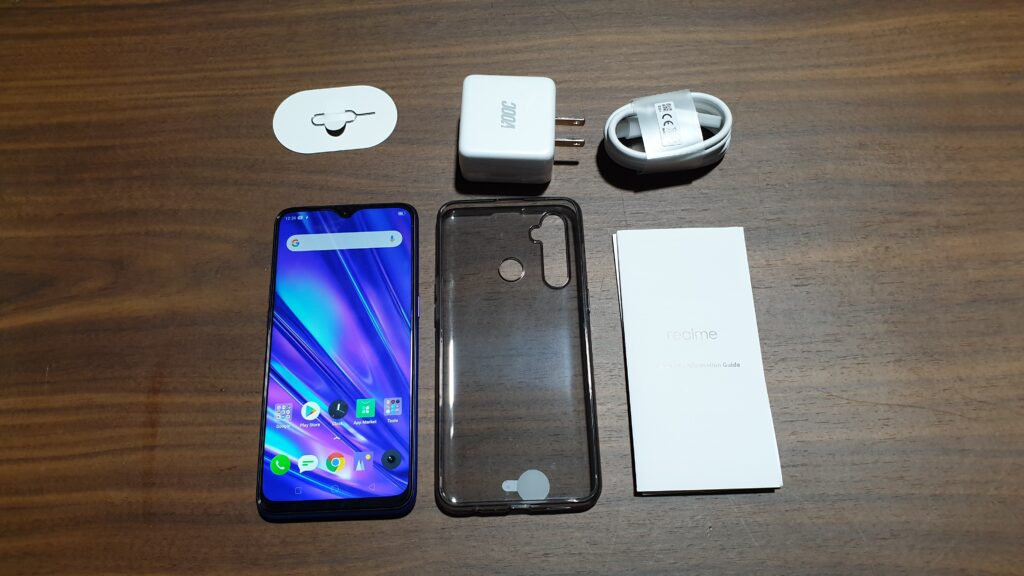 While many other vendors expect you to chunk out separately for a fast charger, the fact that realme has bundled it for free in the box is a bonus indeed.

A closer look at the realme 5 Pro

Compared to its immediate predecessor the realme 3 Pro, the new realme 5 Pro is a wee bit longer, slightly thicker and heavier by 12g but has more robust splash proofing that protects it from inadvertent rain showers or misadventures though it’s technically not IP-rated for any form of immersion. According to realme, they’ve invested significant effort to add in a combination of splash-resistant foam rings at critical ingress points in the phone like the SIM card port and charging port and protective sealant around critical components.

The design of the realme 5 Pro doesn’t break new ground as it has a similar notch up front like many other phones and rounded edges in keeping with contemporary design doctrine for smartphones but it has it where it counts with improved hardware and the aforementioned splashproofing of the chassis. 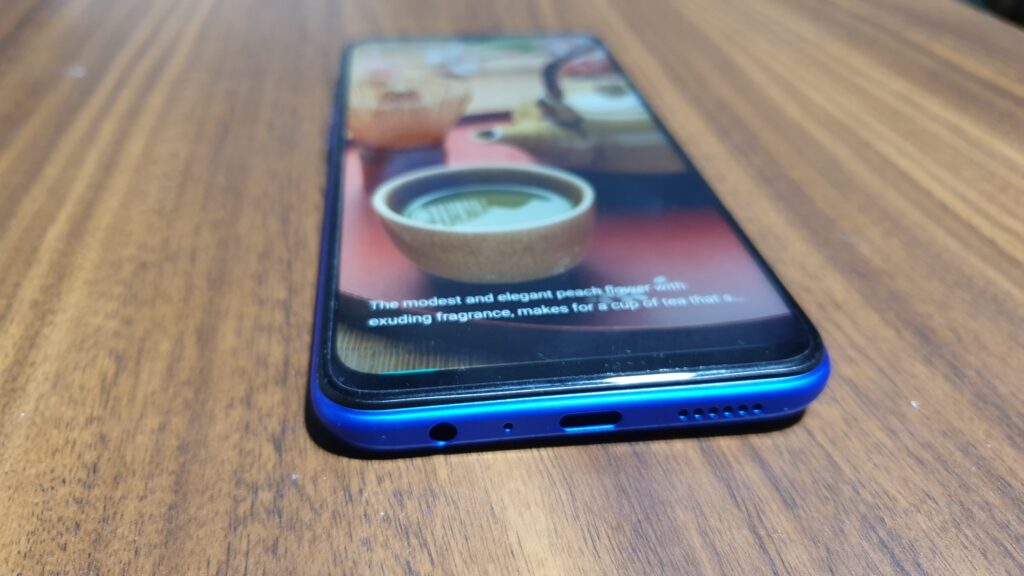 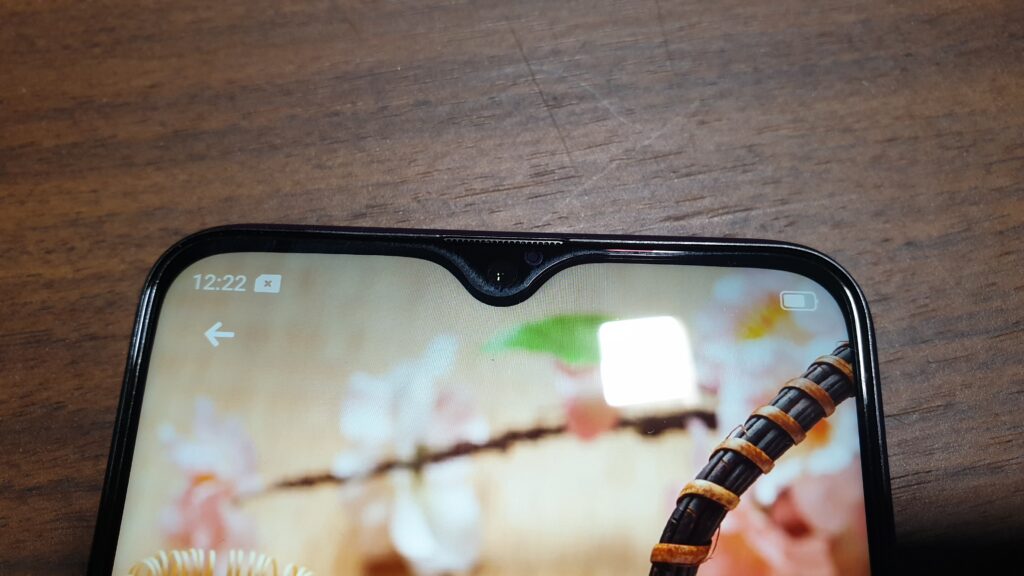 Externally the realme 5 Pro comes in your choice of two colours – a shade of Sparkling Blue or Crystal Green. Our test unit came in the former. Unlike the usual gradient finish seen in many other phones, the realme 5 Pro and its sibling the realme 5 both add in several additional steps including laser etching, electroplating and ink screen printing along with a final layer of protective gloss to achieve a unique geometric finish that reflects the light somewhat like a stylised diamond. Unfortunately, it’s also a fingerprint magnet but the provision of the casing goes some ways to avoid that. 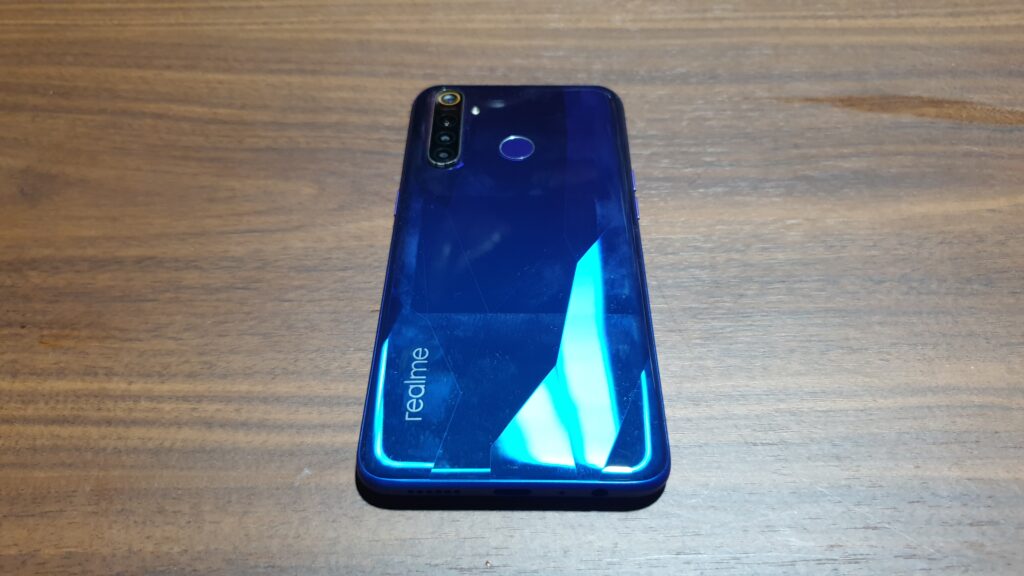 Aesthetics aside, the realme 5 pro looks surprisingly good for what you pay for though this is due in part to its rather fancy looking finish. Most of the phone is made of polycarbonate and this is apparent when you hold it in your hands though its finish does mimic pricier alternatives made of glass and metal and the weight of its 4,035mAh battery lends it extra heft to match its pricier competitors which usually incorporate more glass and metal.

The phone has gently rounded edges all around including the backplate and can be held comfortably in one hand on account of the narrow side bezels. The left side of the phone comes with a volume rocker as well as a triple SIM card slot. What this means is that you’re able to pack two SIM cards and up to a 256GB microSD card to augment the memory, all at the same time – something some flagship phones are unable to do, if at all. The right side comes with a volume rocker while the top of the phone is otherwise bare. 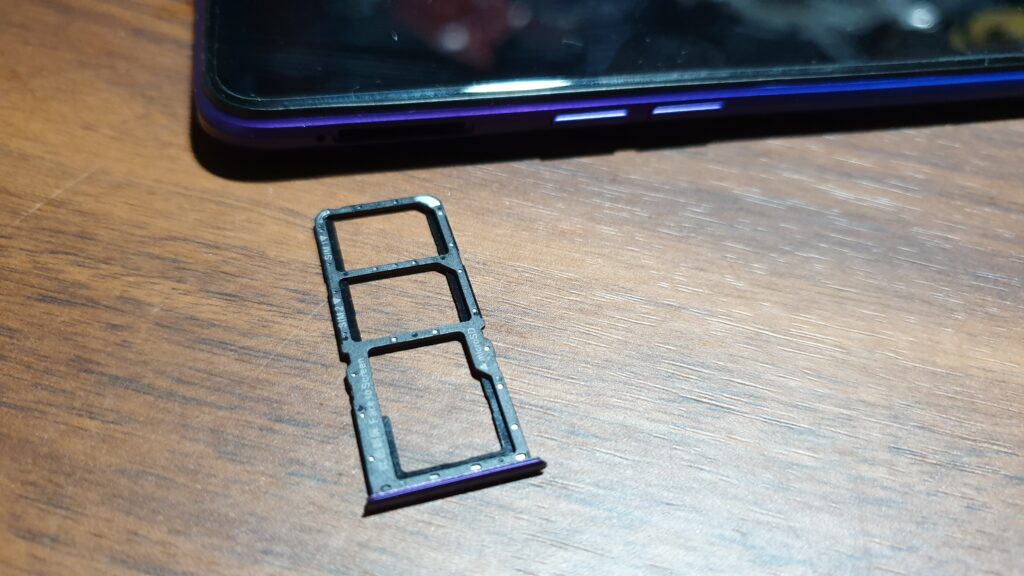 The base of the phone sports a USB Type-C port, a speaker grille for the mono speaker on the phone and a pleasant surprise –  3.5mm audio jack.

The front of the realme 5 Pro hosts a 6.3-inch dewdrop notched LCD display up front with 2,340 x 1080 pixel resolution and a screen-to-body ratio of 90.8% on account of exceptionally slim side, top and bottom bezels which gives it more screen real estate. The notch itself houses a 16-MP selfie camera. They’ve eschewed any buttonry up front though they’ve included a rear-mounted fingerprint reader for authentication purposes. 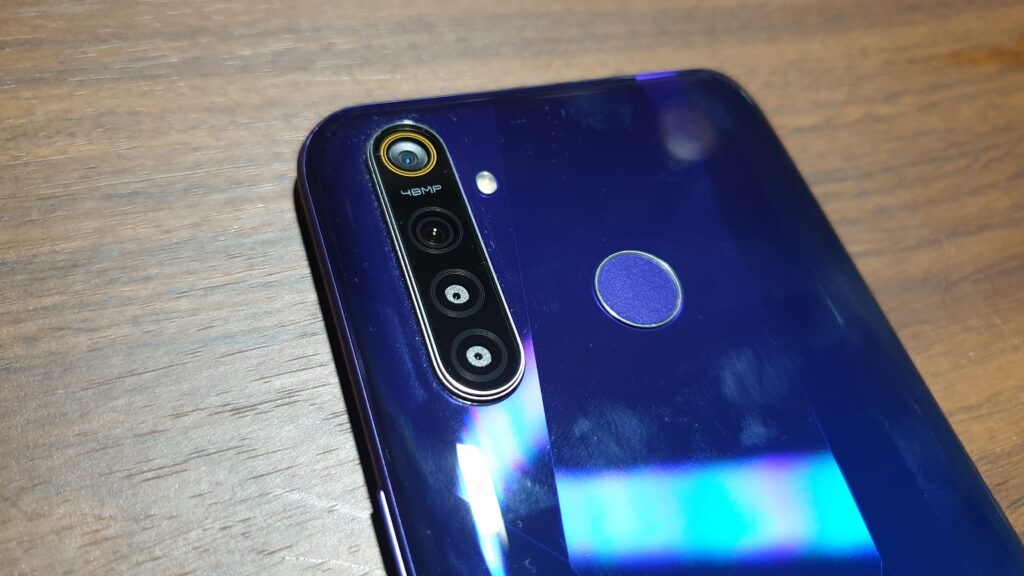 The camera array is a rather impressive affair seeing the realme 5 Pro’s intended entry level pricing as it integrates Sony’s vaunted 48-MP IMX 586 sensor with an F/1.8 aperture paired with phase detection autofocus (PDAF) as the primary shooter with the ability to tackle 4K video too.

The secondary camera 8-MP camera has a wide angle lens with a 119-degree angle of view while the third 2-MP macro camera kicks in if you’re taking objects at extremely close distances at about 4cm which is almost point blank range. It also has a 2-MP depth sensor to enable the bokeh effect when capturing portraiture. There’s no OIS on any of the realme 5 Pro’s cameras but it does have front and rear camera electronic image stabilisation for judder free footage. 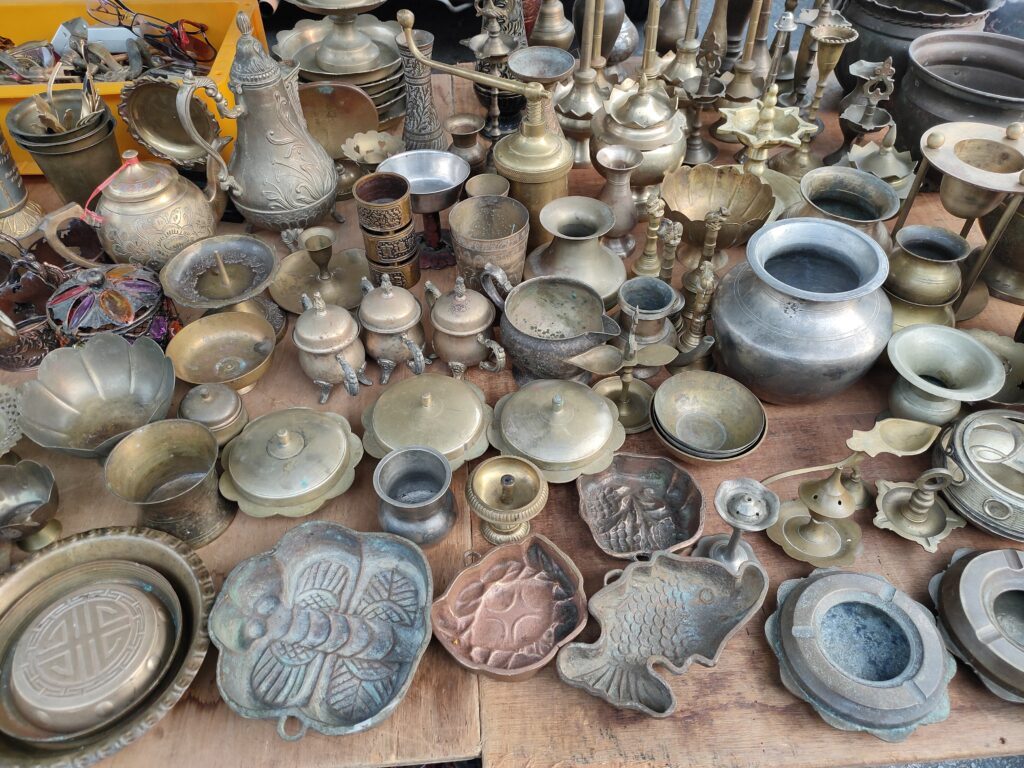 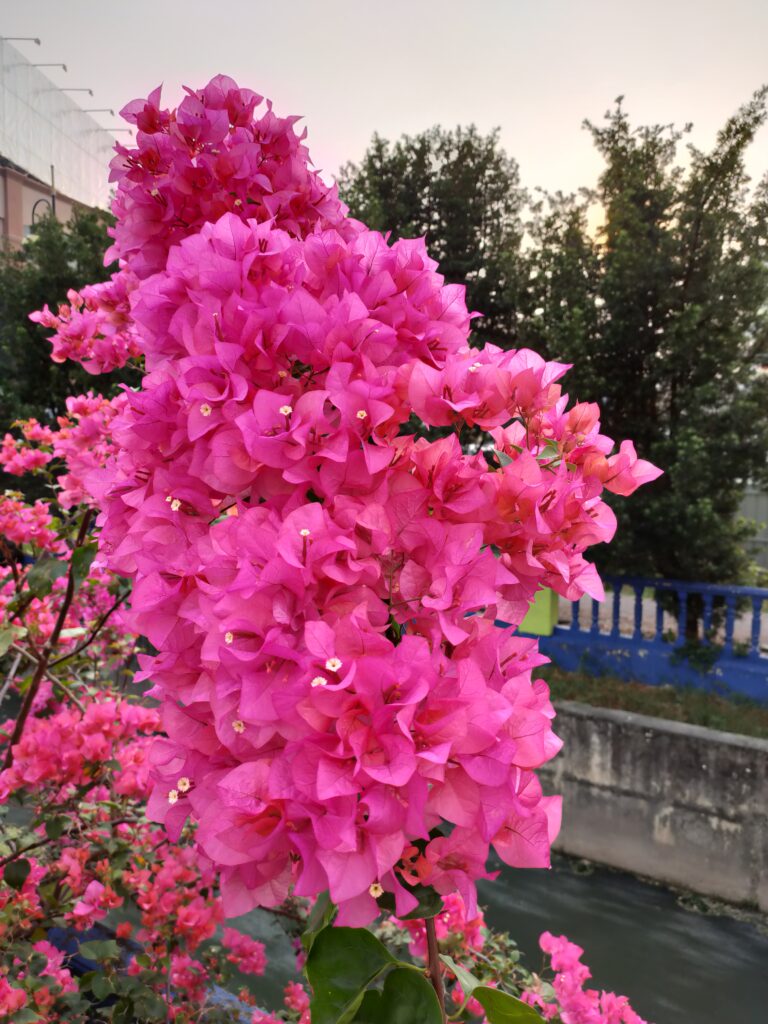 The camera array also takes advantage of AI enhancements off the Snapdragon processor to offer several important modes including a Nightscape mode for low light shots and an intelligent beauty mode and scene recognition in order to optimise results. 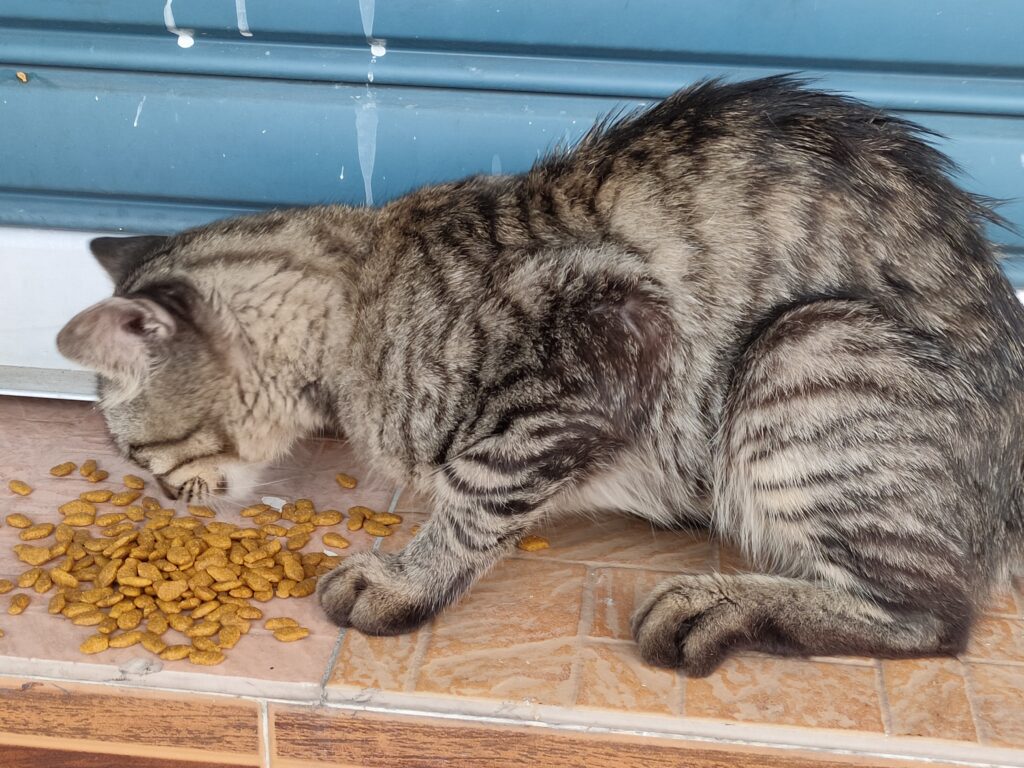 Another benefit to the realme 5 Pro’s cameras is a Chromaboost mode that bumps up the contrast and colour saturation to make images pop. There’s also a 960FPS super slow-mo video mode at 720P resolution too which makes the realme 5 Pro’s rear camera array quite well rounded indeed.

The front 16-MP camera comes with the Sony IMX471 sensor with 2um large pixels for superior light sensitivity and better low light shots. The relame 5 Pro’s AI is also put to good use here with intelligent beautification so that it tastefully enhances your mug based on gender without looking overly artificial or, for the matter, terrifying.

Firing up the phone was a swift affair and the phone runs realme’s own ColorOS 6.0 which has some rather unique characteristics that bear closer inspection. Stay tuned for our full-on review where we put the realme 5 Pro through its paces!