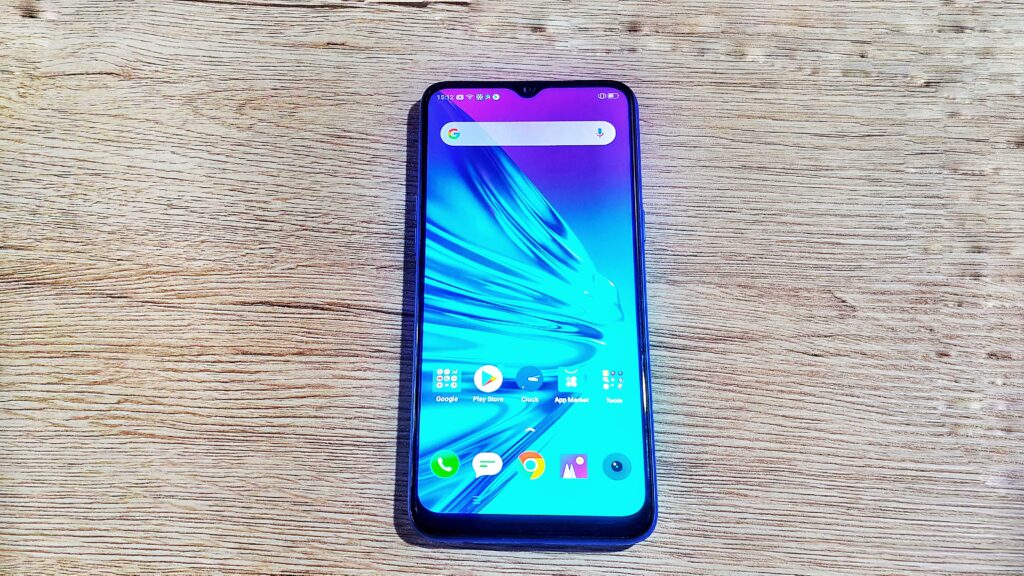 Announced at the same time as the higher end Realme 5 Pro, the Realme 5 is the brand’s latest affordable entry-level smartphone that aims to keep prices low while offering exceptional value in the form of a quad-camera, a large display and long battery life.

After launching in India sometime in August, Realme announced the debut of the Realme 5 and its sibling the Realme 5 Pro for the Malaysia market this September with availability slated sometime for early October.

The effective successor to the erstwhile Realme 3, the Realme 5 skips a generation number due to numerological concerns against the number 4 and adds in several tempting upgrades and features that you rarely see in an entry level phone like a quad-camera and a massive 5,000mAh battery. 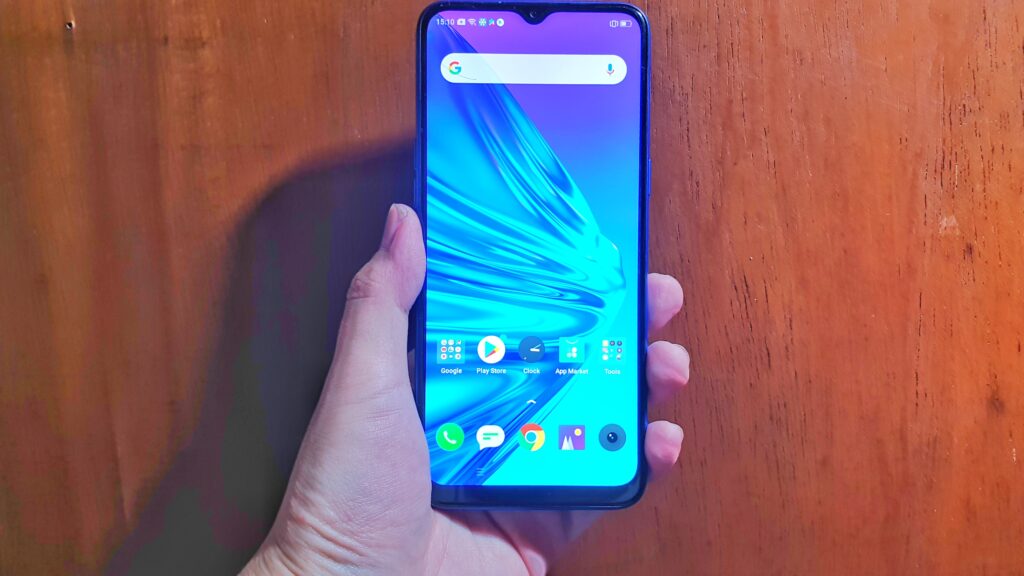 Externally, the realme 5 looks fairly well built and holding it reveals a surprising heft to the phone on account of it packing a 5,000mAh battery that dwarfs what many flagship phones are carrying today.

This is quite an achievement seeing as the realme 5 is only 9.3mm thin despite the sheer size and capacity of the battery they’ve crammed in.

On paper, realme is touting that the battery can last shy of 30 days – that’s an impressive month on standby before needing a recharge. Alas, the phone ditches more premium materials like glass or metal and instead opts for a polycarbonate chassis all around though this also helps to keep the weight down. 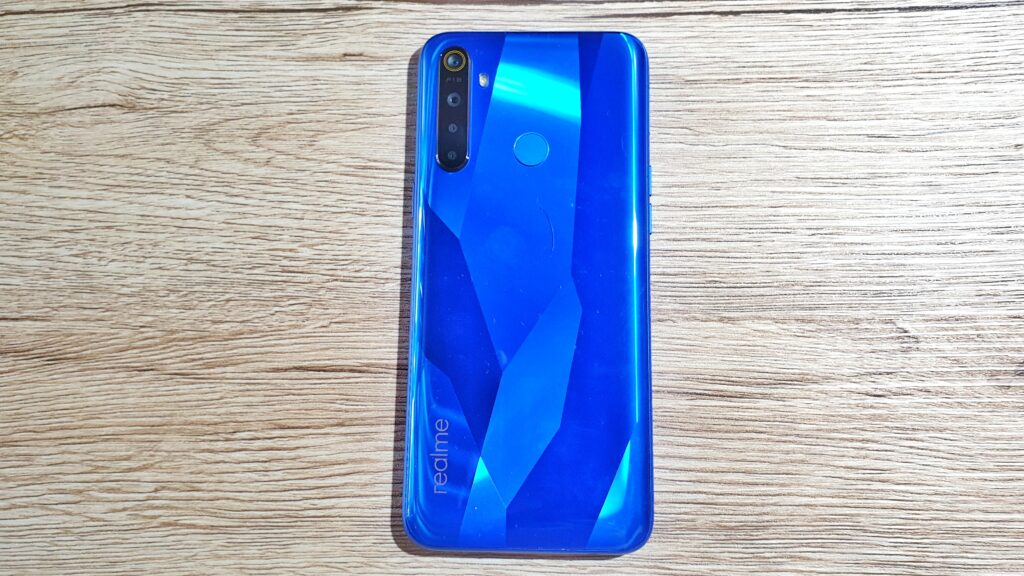 Phone aside, the packaging of the realme 5 comes with most of the essentials. You get a UK-style 5V/2A USB charger,  an accompanying microUSB cable to charge the phone and a soft TPU casing to protect your device from nicks and scratches. There’s no bundled pair of headphones with the phone though you can still purchase them separately as realme has several decent models available. 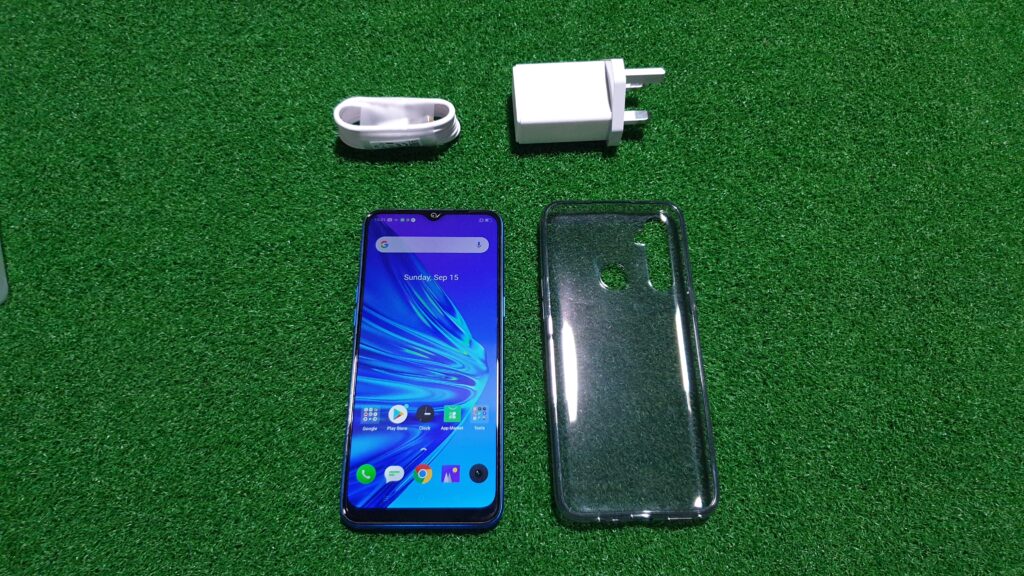 In terms of design the realme 5 plays it safe without any unusual avant garde aesthetics and is more of a refined design over its predecessor the realme 3. The design itself prioritises maximising screen real estate and tactility. In both regards, realme has done the job in a very competent fashion. 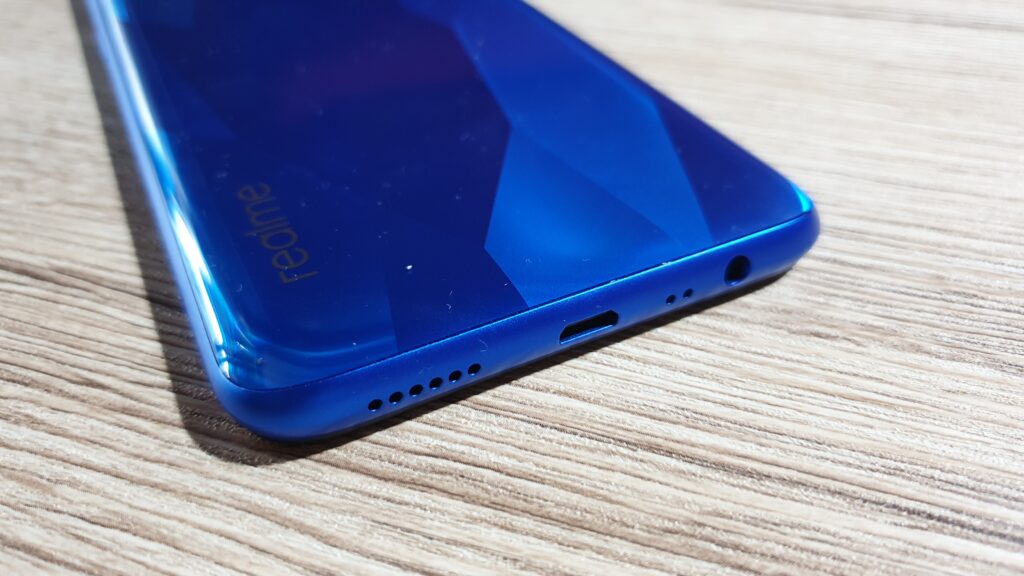 Up front, the realme 5 hosts a 6.5-inch touchscreen with an even smaller teardrop shaped punchhole than ever before that’s approximately 30% smaller than the one on the realme 3 to maximise the screen-to-body ratio. On paper, the realme 5’s IPS LCD display has a resolution of 1,600 x 720 pixels with the mini-drop, as realme is wont to call their pared down teardrop punch-hole, helping to bump up the screen-to-body ratio to 89%.

Save for a tiny chin at the bottom of the phone and the mini-drop up top that houses a 13-MP selfie camera, the front consists almost entirely of the display. At first blush, the realme 5’s touchscreen proved to be relatively vibrant and lush with sufficiently sharpness for most users. 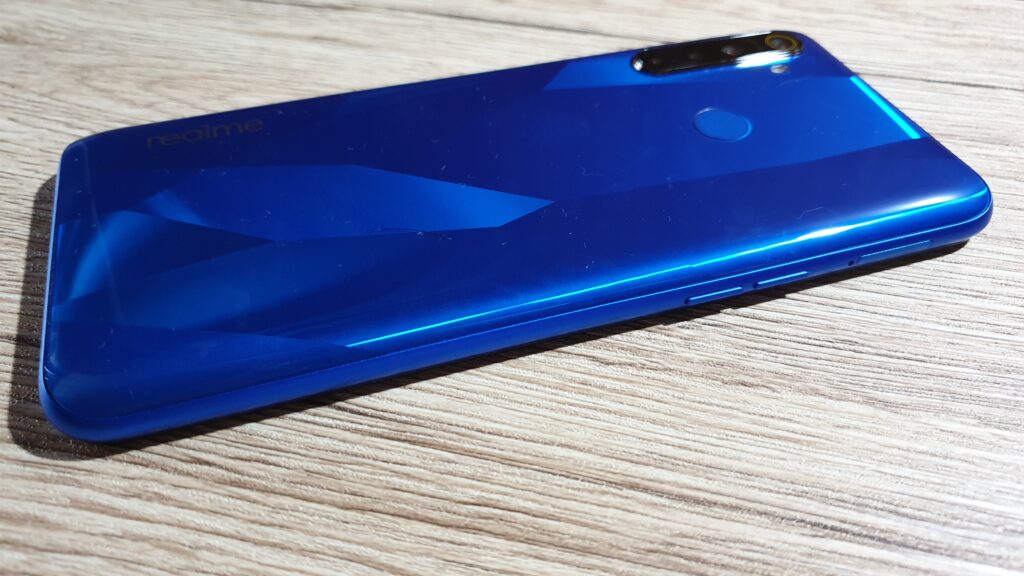 The right side of the phone is bare save for a power button while the left hosts a volume rocker and a triple card slot tray. This makes the realme 5 one of the few phones available that can host 2 SIM cards and a microSD card at the same time.

The base of the realme 5 has the usual speaker grille for the sole mono speaker on the phone and an increasingly antiquated microUSB port for charging and docking duties.

Seeing the intended price point of the realme 5, the use of a microUSB port is a more prudent move rather than a USB Type-C port as most users in its price range will likely have more cables of the former than the latter. Another pleasant bonus is the retention of a 3.5mm audio jack. Up top, the phone is otherwise unadorned.

The backplate of the phone comes with a rather unique diamond-textured pattern that, according to Realme, is the result of an intricately series of electroplated sections alternated with ink-screen printing before the whole affair is varnished with a hardened polish. This creates a series of reflective geometric designs on the backplate that look quite fetching under sunlight. 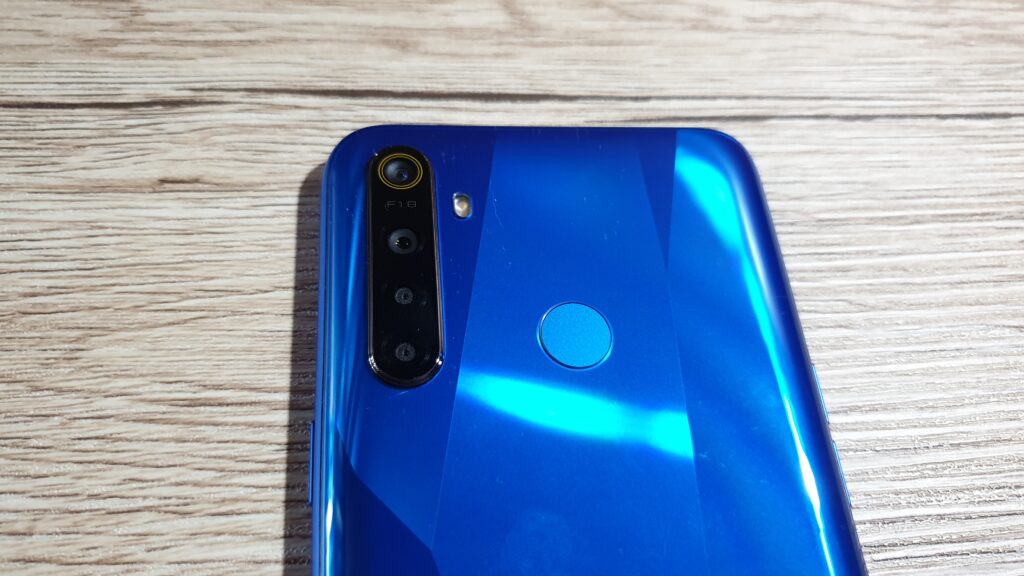 Unique looking backplate aside, the rear of the realme 5 hosts a round fingerprint reader and an AI-enhanced quad camera array emplaced in the upper left corner of the backplate. The camera housing sticks out slightly which theoretically makes it prone to scratches but realme has bundled a free casing with the phone that resolves this complication nicely.

The rear quad camera is centered around a primary 12-MP F/1.8 camera with PDAF and autofocus, a secondary 8-MP wide angle lens with a 119-degree field of view, a third 2-MP portrait camera and a 2-MP macro camera. On paper, this setup allows for up to 4K@30fps video capture on the rear.

When held, the plasticky chassis of the realme 5 is immediately apparent though it feels sturdy with a reassuringly weighty heft to it. For what you pay for, the realme 5 is a pretty fair proposition as far as build quality goes. 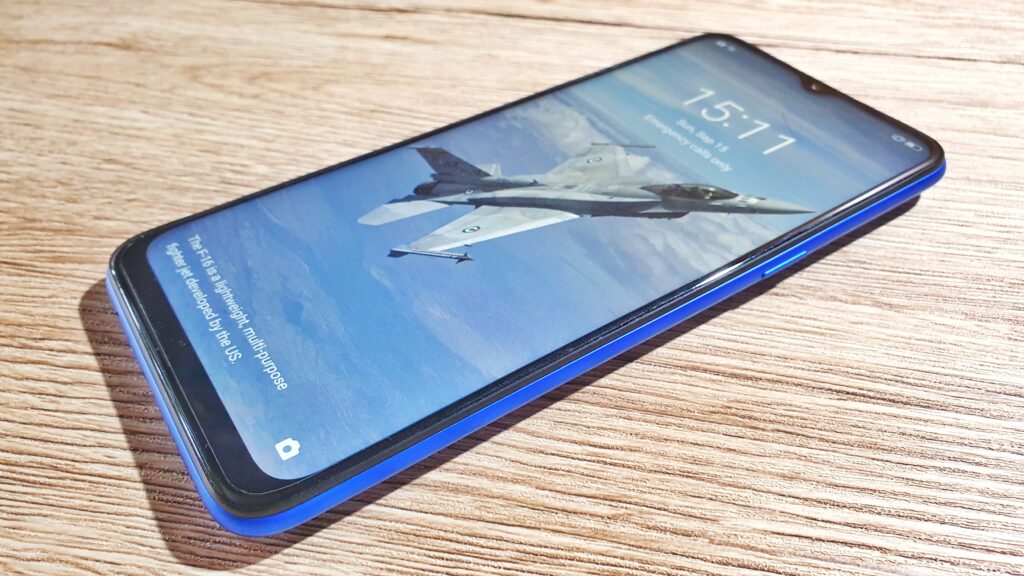 In terms of the rest of the hardware, the realme 5 officially comes in three subvariants that are otherwise identical save for how much RAM and how much onboard storage they have. At the time of writing, three variants are known to exist – a 3GB RAM/32GB, a 4GB RAM/64GB and a 4GB RAM/128GB variant which was what our test unit packed. Which storage variant will be available for sale in Malaysia is up in the air at the moment though our test unit would be the most likely candidate.

Storage aside, all of them come with the Qualcomm Snapdragon 665 octacore processor built on an 11nm process running Android 9.0 Pie overlaid with their ColorOS 6 user interface. When we fired it up, the phone booted up in a fairly nippy fashion and getting up and running took a few minutes for old hats with many of Color OS’s usual tricks and quirks present and available. Stay tuned for our full-on review where we put the realme 5 and its quad-camera array through its paces to see if it’s a true budget phone behemoth.