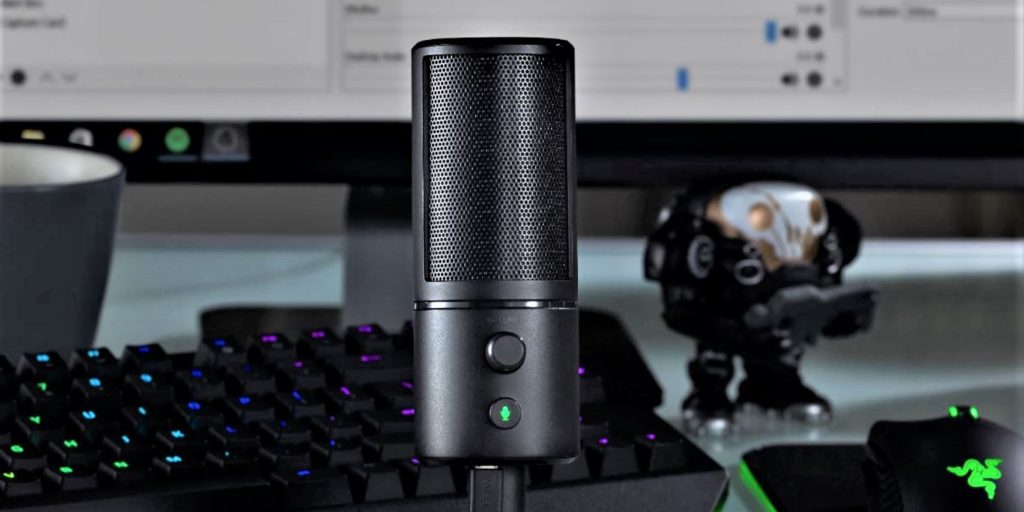 Seeing as everyone is working from home these days on account of the COVID-19 pandemic, video calls and live streaming have gained renewed importance.

Sometimes the naff audio on your laptop or mic headset doesn’t quite cut it but if you don’t have the time or inclination to sort through a bunch of bizarrely named mikes just to get something that works or the savviness (and patience) of how to set one up, you’ll appreciate the charms that Razer’s Seiren X microphone brings to the table. 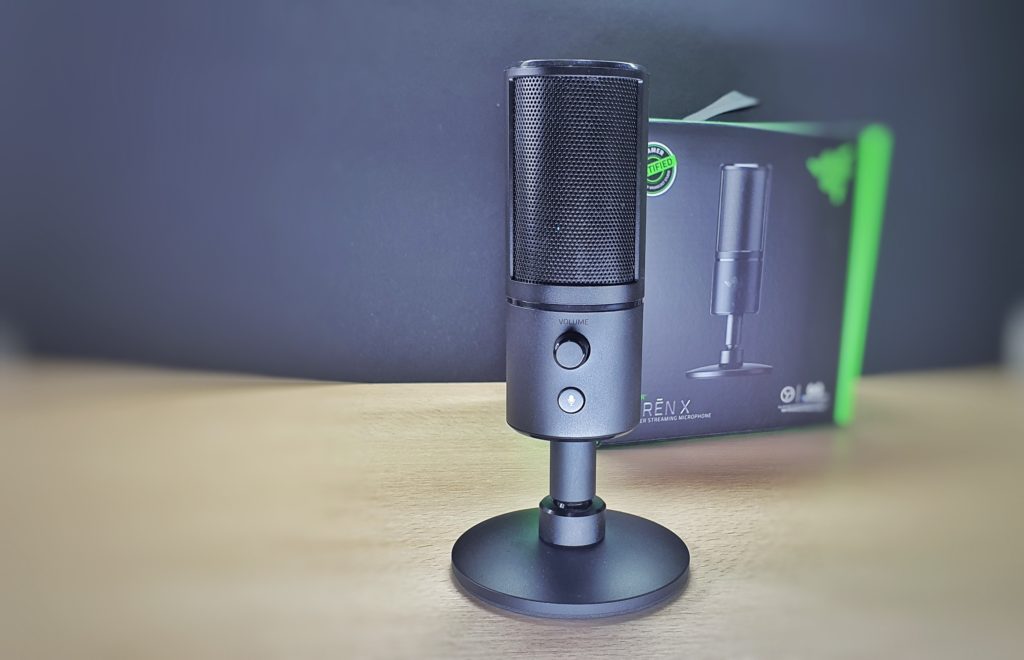 As the entry-level offering in Razer’s microphone line-up, the Seiren X microphone has been around for quite a good while. Since its release sometime in 2017, the design has not changed much, which is a testament to its performance and the robustness of its design. 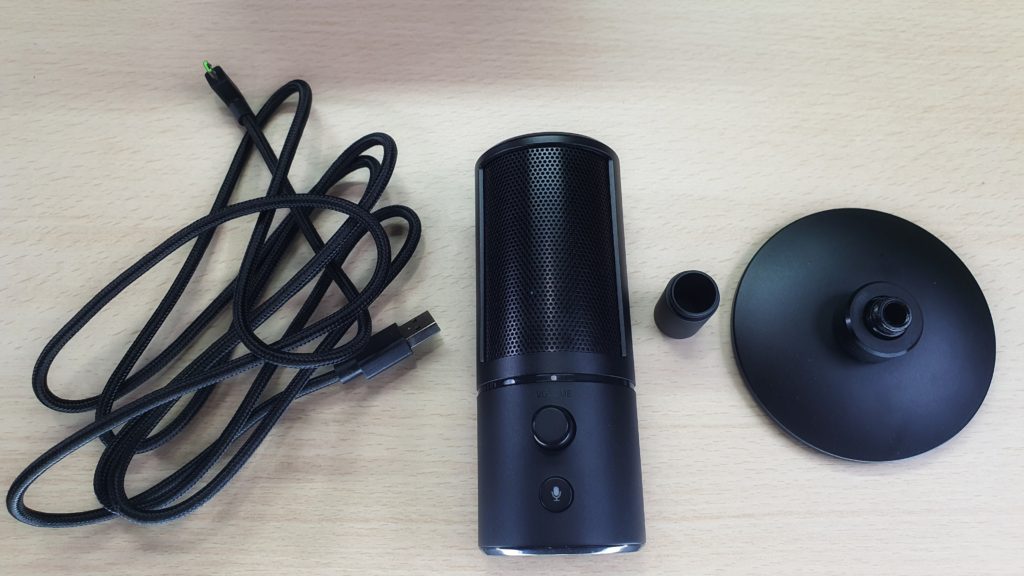 The box itself bears Razer’s characteristic neon green and black livery and popping it open reveals the microphone itself nestled in a fitted foam tray with a stand and a USB Type-C to micro-USB cable beneath it. There’s not much else bundled with it but that’s not a major quibble.

In terms of build quality, the Razer Seiren X does not disappoint with a sturdy base that holds a ball joint which enables you to reposition the mike to about a 25-degree tilt at all points of the compass without it keeling over. All this is done up in a matte black finger resistant finish. 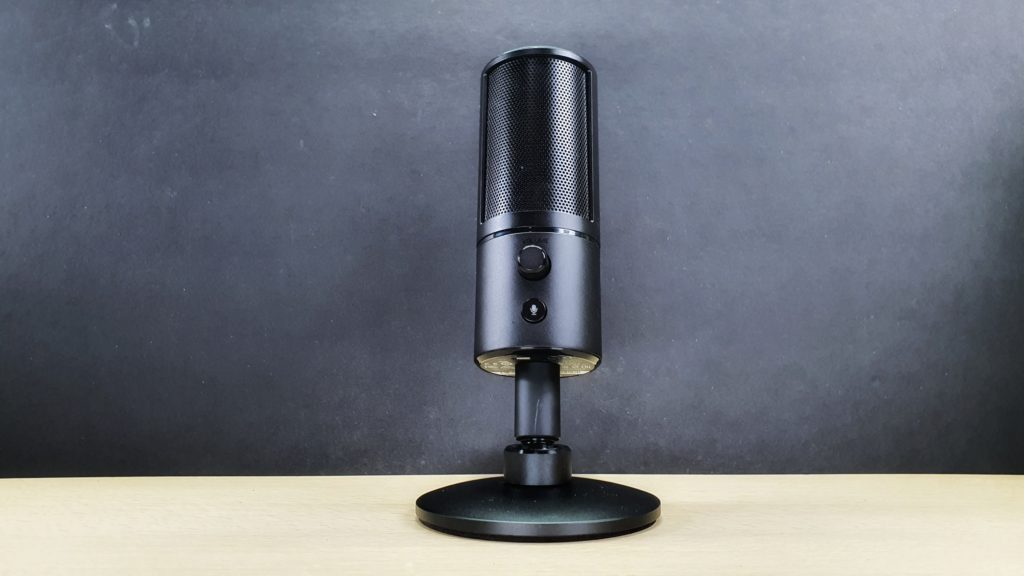 The underside of the base is also lined with a layer of vibration dampening foam which also helps in minimising external vibrations like accidentally knocking the table, fingertaps and the like in order to ensure cleaner sound. 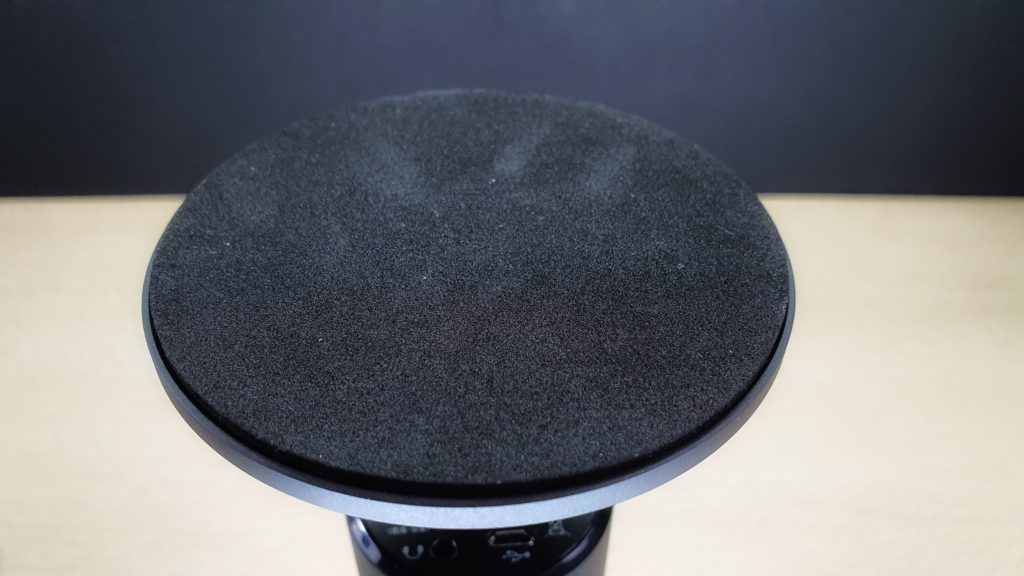 The microphone array itself is also done up in a matte black with a matching grille for the mike, a volume dial and a mute button along with the signature Razer logo emblazoned in an understated black on the casing.

In case black doesn’t quite appeal, it also appears in Mercury White and Quartz Pink too. The underside has a microUSB port for the power cable and a 3.5mm audio jack in case you want to monitor your audio feed.

The USB cable itself stretches to about 1.8 metres and has braiding across its entire length to prevent fraying, lending it a degree of robustness for long term use. The compact nature and build quality of the Seiren X makes it ideal for a portable setup that a streamer can toss into their backpack that’s also a step better than relying on a headset microphone.

The Razer Seiren X is sturdily built while weighing a total of 384g which is inclusive of the stand, the microphone and the cable to some extent. While it’s intended for semi-static setups, the Razer Seiren X weight is light enough that it can still be tossed into a backpack and easily dismantled by unscrewing the mike from the stand and detaching the right-angled cable. The individual pieces are solidly built so there’s no risk of it breaking but it’s best to put them in a separate bag to avoid them getting jostled about with the rest of your gaming kit.

Assembling the Seiren X is as easy as it gets -there are Lego sets that are more complicated than this – and simply requires you to screw the mike into the adjustable base, hook up the microUSB portion of the cable to the underside port on the mike itself and the Type-A USB port to your PC. Once you’ve accomplished all this you’re ready to go. 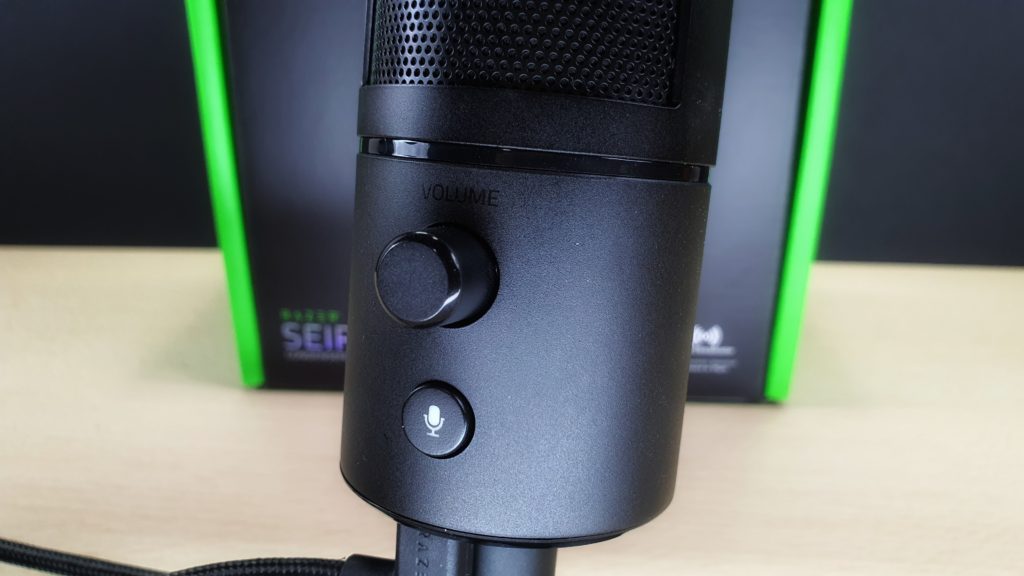 Installing it and getting it ready for action doesn’t require significant intervention on your part as it’s quite simply plug-and-play. Once it’s hooked up to your PC or streaming source, the Seiren X is automatically recognised as a mike and you’re ready to rock and roll.

In terms of audio design, the Razer Seiren X is hardwired for only a super cardioid polar pattern. A super cardioid polar pattern optimises audio pickup towards the front of the mike while rejecting audio from the back which makes it good for picking up sound during live streaming games, podcasts and, for more talented users, a fair measure of vocals if you can carry a tune. 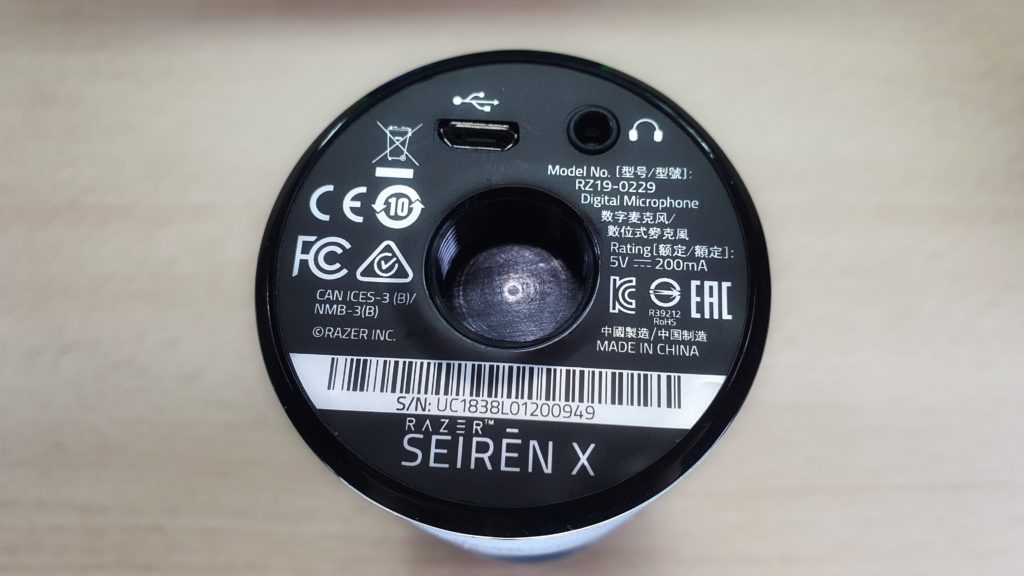 A 3.5mm audio jack in the base of the Seiren X allows for live monitoring

We hooked it up to the ASUS TUF Gaming A15 notebook and went through several games of Warzone with it with a fire team of like minded associates and also used it during several work-related video calls and video voiceovers.

Captured audio quality was relatively clear with good clarity sufficient for streaming purposes though it’s understandably not studio quality; even so, it’s more than sufficient for its intended mission profile.

To put it into perspective, the audio quality on offer here with the Seiren X is a grade better than relying on a boom mike or other built-in microphone on a headset and several notches better than any built-in option on most laptops which either proved inaudible or tinny and tinny at best with little tonality.

Unfortunately, the nature of its design means that it tends to pick up other sounds within close vicinity like our mouse clicks and whenever we used the keyboard in a vigorous fashion though it managed to effectively squelch out other annoyances from farther away.like the sound of traffic outside and the clatter of cutlery from an associate tucking into a lunch box opposite our desk.

Slightly more judicious placement of the Seiren X helped to minimise keyboard and mouse click sounds though this means a bit of finessing before you go live or investing in a boom but that’s an entirely different kettle of fish that also requires way more outlay too.

In terms of placement, the long braided cable does allow for you to place it farther away from you but we found it worked best a few inches away from your mouth. Fortunately, the Seiren X’s compact footprint made it relatively easy to plonk it near you on a table or wherever you’re casting from.

With a compact form factor that makes it easy to tote around, extremely easy plug-and-play installation and decent sound quality that’s markedly better than what you’d get from a headphone mic or built-in laptop mic, the Seiren X is an appealing choice for novice podcasters and live streamers looking to get their feet wet in the game and for veterans looking for a sturdy portable setup to take offsite for tournaments and the like.

If you’re looking for an even more compact setup or something even more affordable, you can explore the newly released Razer Seiren Mini that’s almost half the size. 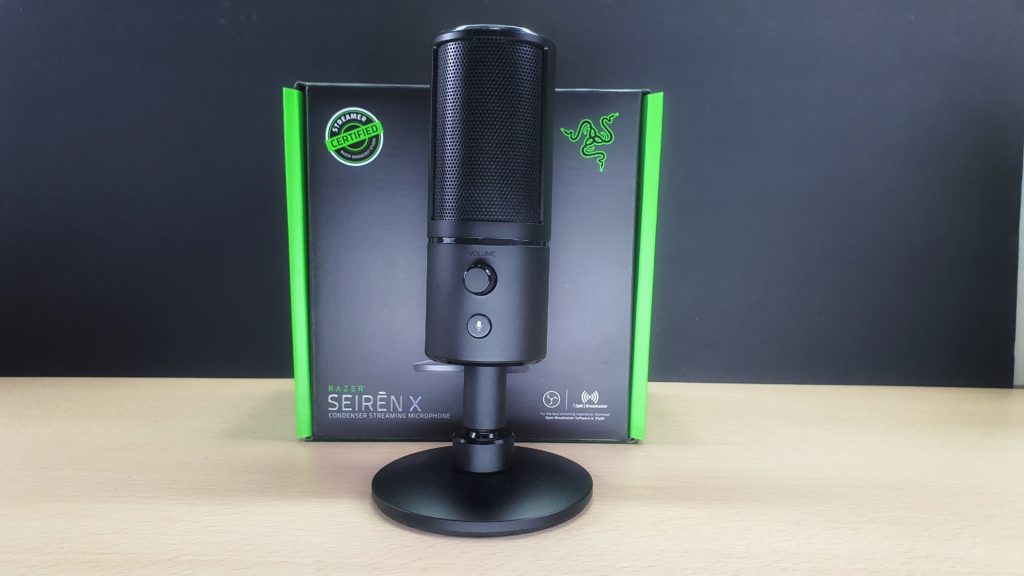 What we liked Highly portable, super easy to set up, reasonably priced
What we didn’t Only one polar pattern, rather prone to picking up mouse and keyboard clicks
We say The Razer Seiren X microphone is ideally suited for novices as it is easy to set up and use with decent audio quality. Seasoned streamers will also appreciate its compact and portable design though the lack of multiple polar patterns means it lacks versatility.

The Razer Seiren X microphone is ideally suited for novices as it is easy to set up and use with decent audio quality. Seasoned streamers will also appreciate its compact and portable design though the lack of multiple polar patterns means it lacks versatility.

Super easy to set up

Good performance for streamers and YouTubers

Only one polar pattern

Rather prone to picking up mouse and keyboard clicks