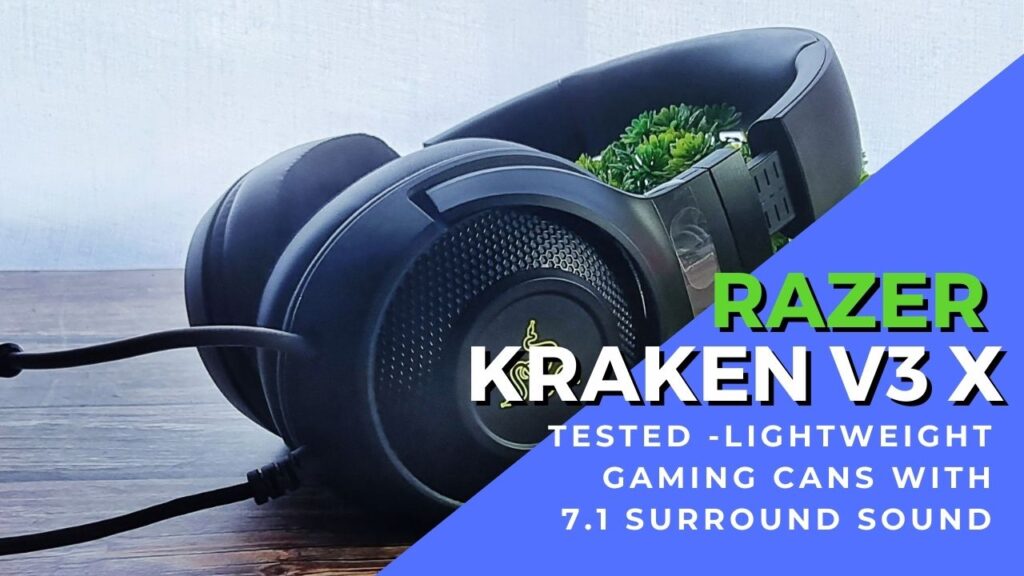 Intended primarily as an affordable pair of gaming headphones for PC and console gaming, the Razer Kraken V3 X is a wired-only solution that costs RM399.

Here’s our Razer Kraken V3 X review where we put it to the test and discover if it’s truly worth your money. 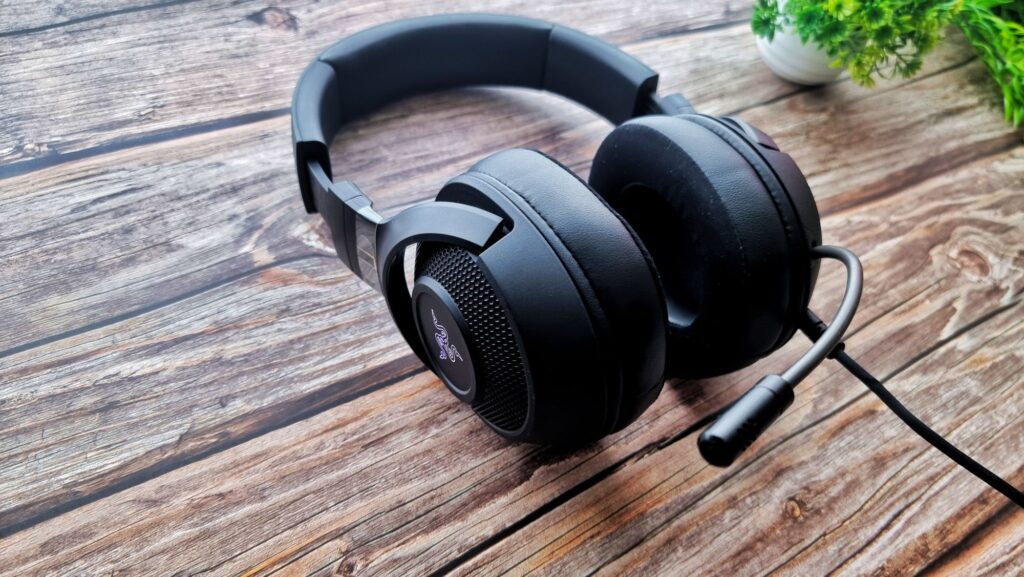 The whole affair is primarily made of plastic including the headband itself and the sliding armatures with a matte finish though the material and build quality are to Razer’s high standards.

Until you hold it in your hands, you would be hard pressed to determine if the headphones are indeed made of plastic and the telltale giveaway is just how light it is at 285g. This actually works in its favour as this makes it much more comfortable for extended wear.

The plushly upholstered headband features a thick cushion on the inner top section which is the primary load bearing portion of the design on your bonce. Each end also features extendible armatures that allow you to adjust the fit of your headphones for a better passive sound seal and comfort.

Each can on the Razer Kraken V3 X features 40mm Razer TriForce drivers and each side is clearly marked out with a Left and Right symbol. The cans are semi-flexible with a degree of modest motion and have Razer’s distinctive triskelion symbol embellished with RGB lighting that can be customised via Razer’s Synapse app. Surrounding the Razer logo are a series of metal grilles. Each can is also heavily upholstered with foam and a faux leather lining that make it look wonderfully premium.

Both cans differ slightly in that the left one features a non-removable 2m cable terminating in a USB-A connection, a flexible cardioid microphone suspended on the end of a boom, a volume control dial and a mic mute button.

Perhaps the biggest pickle to what is otherwise a well built design is the knurled volume control dial which has little clickiness to it so that you don’t have an ideal if all your spinning is having any effect. It also has a plasticky feel belying the rest of the otherwise solid design.

Under the hood, the Razer Kraken V3 X features the following hardware:

Intended as an entry-level pair of headphones for gaming, the headphones primarily rely on passive noise insulation from the upholstered cans and lack active noise cancellation. The boom mic features a unidirectional cardioid mic tuned for focused audio pick-up near your mouth area.

While the mic is flexible, it is not removable along with the cable which does make the whole design somewhat bulky for travelling. In any case, the Razer Kraken V3 X is primarily intended for users in static positions which would be the vast majority of gamers these days in the new normal.

The choice of a USB-A port for the wired connection means that it’s a natural fit for use on a PC or console though you can still adapt it for use on mobile if you happen to have a USB-A to USB-C dongle handy.

Most of the parts on the Razer Kraken V3 X aren’t user replaceable – the cable, the boom mic and the ear cups are all solidly attached together. If a critical component is kaput, it may potentially tank it but the solid build quality and some care should ensure that it should last for several years.

While the Razer Kraken V3 X is effectively plug-and-play, you’ll need to jump through a few extra hoops to maximise its capabilities. Like many other Razer headsets, the Kraken V3 X has 7.1 Surround sound support via a dedicated Surround Sound app from Razer. Unfortunately, Razer’s 7.1 surround sound only works on PCs running Windows 10 64-bit so it doesn’t play well with consoles or other gear.

Getting 7.1 Surround sound working requires a rather lengthy process of registering your headphones on Razer Synapse by submitting your purchase details. Once that’s sorted, you need to get the unlock code via email that you then have to input into the Razer Surround Sound app to unlock its functionality.

That’s a lot of hoops to jump through but it’s well worth the trouble for PC users as it adds much better sound staging versus just using it straight out of the box. On the bright side, you really only have to do it once and after it’s unlocked for your Razer Synapse account, you can use it on other 7.1 Surround gear from Razer.

By default, the Razer Kraken V3 X with its 7.1 Surround app activated kicks out excellent sound staging with convincing directional audio which is apparent after playthroughs of several hours of romping around in Cyberpunk 2077 and Horizon Zero Dawn on the PC. Bass was audible, if not particularly deep or beefy and it has a fair handling of treble too which lends it some versatility especially when used for watching movies.

The plush cushions on the headpiece and the cans along with its relative lightness ensured a comfortable gaming experience even with several hours of romping around post-apocalyptic Colorado and Night City and we managed to sit through several episodes of the Mandalorian without undue discomfort.

There is a modest bit of passive sound seal from the ear cups by dint of their sheer amount of cushioning but this is only for really low frequency background noise like the sound of a table fan whirring or distant traffic. If someone is clattering about with cutlery next to you our shouting you’ll hear it even with the audio dialled to maximum.

We also tested it with a Galaxy S21 Ultra which has Dolby Atmos support in Call of Duty Mobile and enjoyed excellent sound staging and subtler audio nuances like spent shells clattering about with boomier gunfire though the lack of Razer’s 7.1 Surround app limits the richness of the audio unless you’re playing it on PC.

Audio quality on the mic is decent with good clarity though it also picks up on background noise too which means that if you’re using it for a video call, you’d best do it in a quiet room.

Should you buy the Kraken V3 X?

At RM399, the Razer Kraken V3 X is considered one of the more affordable of Razer’s wired gaming headphones though you still pay a modest premium over other less well known competitors. Even so, you’re getting good build quality and performance for price. Above all, you’re getting excellent comfort and sound quality for extended gaming, which makes the Kraken V3 X a sound choice. Literally, so.

The Razer V3 X is a wonderfully light and extremely comfortable pair of over-ear headphones. The combination of a plushly upholstered headband and cans combined with good 7.1 Surround audio for gaming and movies make it a reasonably priced choice for gamers.