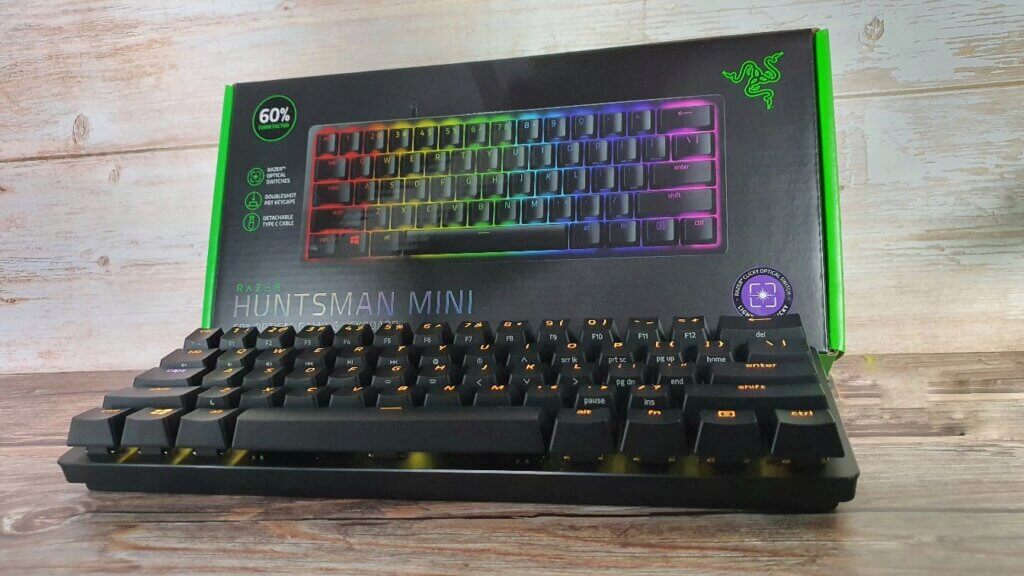 The Razer Huntsman Mini is one of the brand’s first 60% mechanical keyboards that feature their renowned RGB Chroma backlighting on every key while incorporating your choice of either silent Linear Red or Clicky Purple optical switches. It can also be acquired in either a matte Black or a Mercury White paint job. Here’s our review of the Razer Huntsman Mini with purple keys and the matte black finish, with insights on how it fares on gaming, general paperwork and  from a left hander’s perspective. 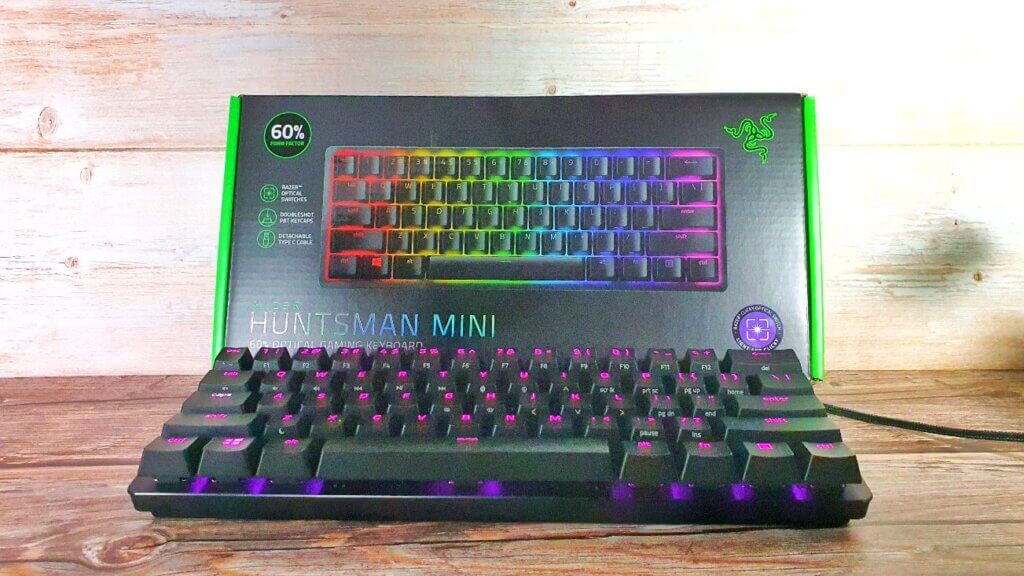 What is the Razer Huntsman Mini Purple?

From a full 104-keys on a standard keyboard, the 60% keyboard form factor of the Huntsman Mini hacks it down to just 61 keys. The fact that they’ve managed to do so while retaining Razer’s Chroma RGB lighting, their Synapse 3 app support and optical switches in your choice of either Linear Red or Clicky Purple switches is a feat in itself.

In order to accommodate its reduced dimensions, the Huntsman Mini keyboard eliminates the numeric keypad and direction keys as well as ditching all the dedicated function keys from F1 to F12 to create a very compact layout.

These omitted keys aren’t permanently eliminated as you can access them as secondary functions by holding down the Function key which has been relocated to the right side of the space bar.

To help you along, holding the Function key down dims the rest of the keyboard lighting and only lights up what selectable keys work with said Function key. 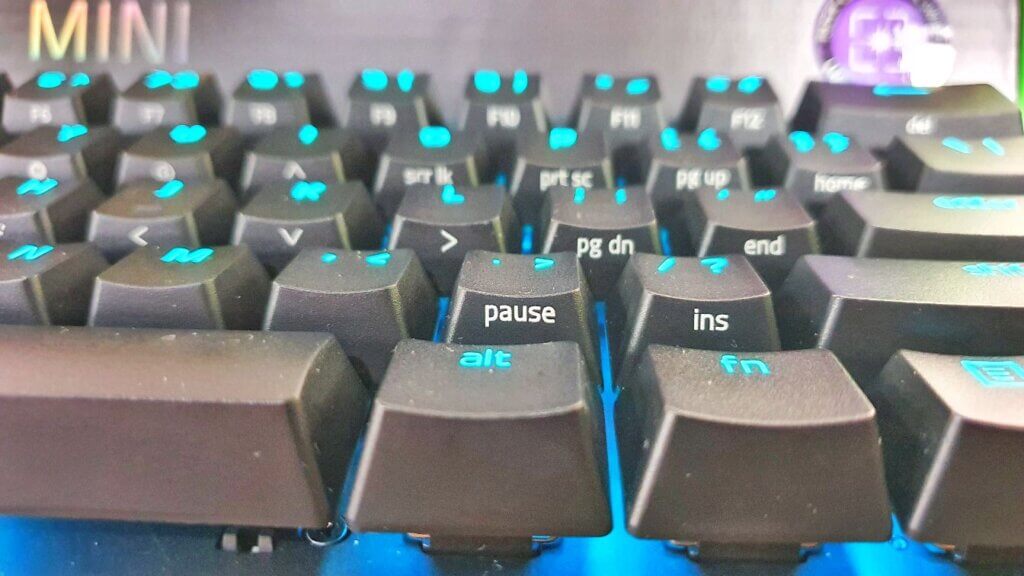 WIth the Function key held down, the top row of number keys do double duty as F1 to F12 keys while the I,J,K and L keys also double up as direction keys. The other usual keys like Print Screen, Page Up, Page Down, volume up and down, pause and play are all here though they’re all reduced to Function key enabled shortcuts.

As you’d expect of a Razer keyboard, the Huntsman Mini is sturdily built with a PCB chassis, an aluminium top plate and Doubleshot ABS keycaps for each key that are rated for 80 million keypresses.

Keys that have secondary shortcut functions also have them printed in white on the side facing you. Unfortunately, these shortcuts aren’t backlit and if you’re a new user, you’ll need some time to adjust to what key does what. If the existing keys don’t quite appeal, you can swap them out for any standard keycap set. 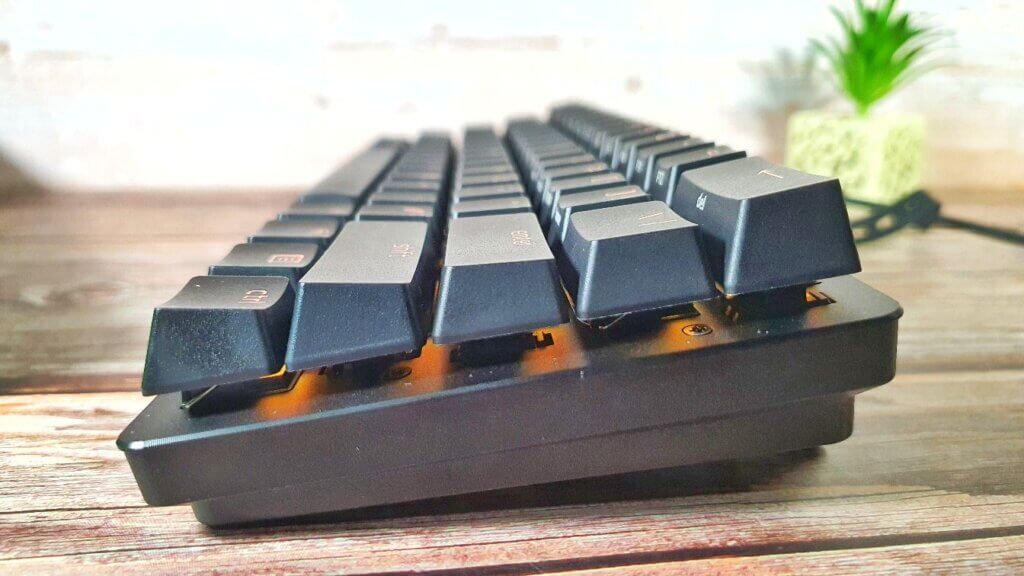 The underside has a pair of two-stage kickstands to prop the keyboard up at two angles of your choice as well as an underside USB-C port for the provided cable. The USB connector cable itself is sturdily built for hard use with the entire length of it braided with fabric and it stretches to about 1.5 metres for extended setups. There are also a quartet of rubber feet to keep the keyboard from slipping.

Unfortunately, there’s no bundled wrist rest like the BlackWidow V3 and it isn’t feasible from a design perspective in any case on the account of how small the keyboard is. The lack of a wrist rest and the compact size doesn’t lend itself to comfortable typing over extended periods of time.

On the bright side, the provision of a detachable cable in tandem with its small dimensions makes this keyboard highly portable and something you can realistically toss into your backpack for a game or two.

Depending on your taste, the Linear Red switches are quieter and are more ideal for typing extended tracts of text in an office setting while lacking the clicky ‘bump’ when depressing a key. The Clicky Purple switches are louder and clickier with a tad more responsiveness thrown in which makes them a better option for gaming. 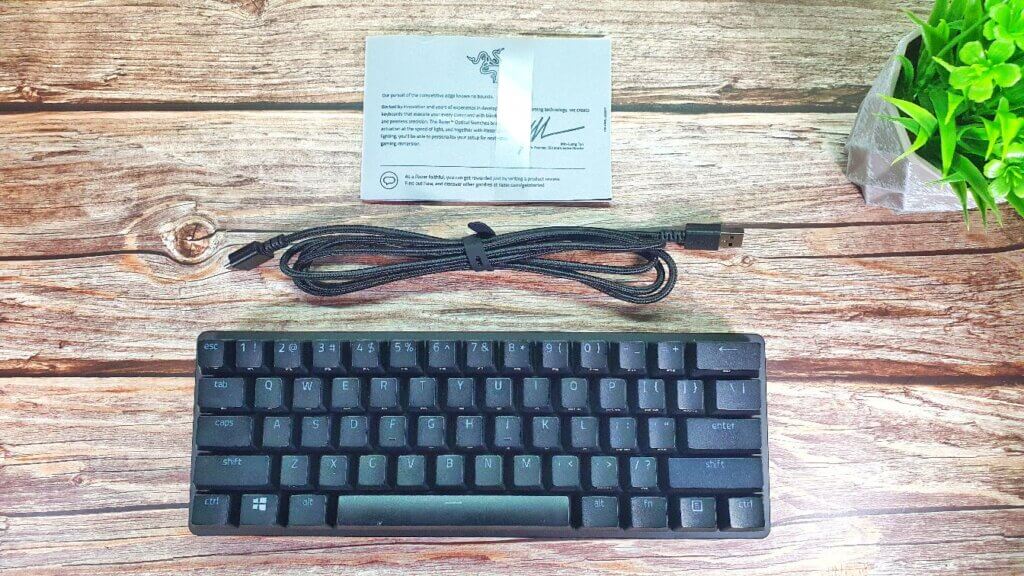 Getting the Razer Huntsman Mini up and running is simply plug-and-play. The keyboard lacks wireless support and needs to be connected via USB cable to a PC for it to work. In this regard they’ve included an underside USB-C port where you can attach the provided cable.

Once you’ve plugged it into your PC you’re prompted to install Razer’s Synapse 3 app. It isn’t obligatory but it lets you further tweak your shortcuts and gain access to further customise the keyboard’s Chroma colour lighting patterns and access their Hypershift mode to assign macros and custom shortcuts.

Unfortunately, Razer’s Synapse 3 software is only available on Windows so macOS users don’t get the full user experience. The physical keys on the Huntsman Mini also aren’t appropriate for the shortcuts that a Mac needs. 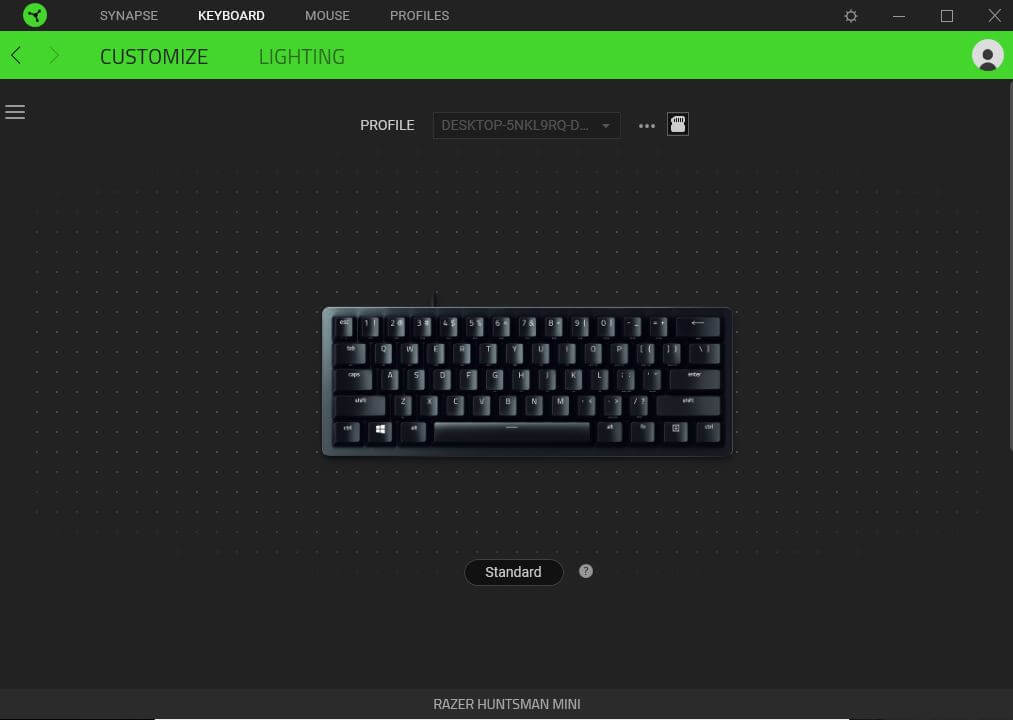 Another pickle is that the Function key shortcuts for the Razer Huntsman Mini are hardwired into the keyboard and you can’t modify them even with Razer’s Synapse 3 ‘Hypershift’ app that allows for you to assign macros and shortcuts to any key. 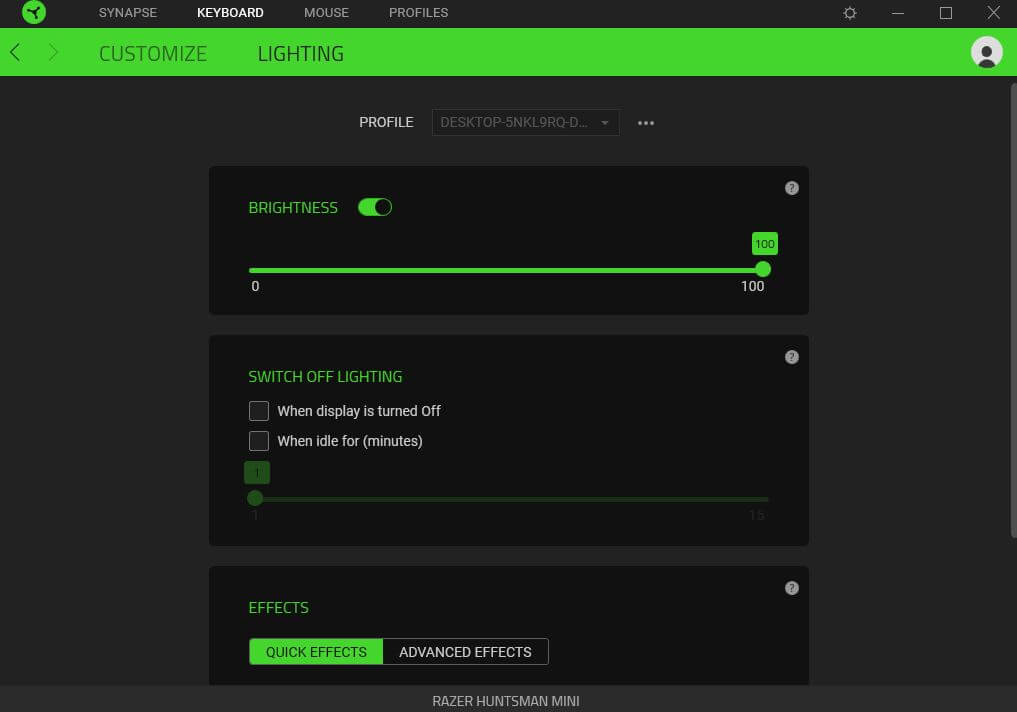 That said, the keyboard does allow you to save up to five different profiles which makes it easy to migrate your shortcut setup. 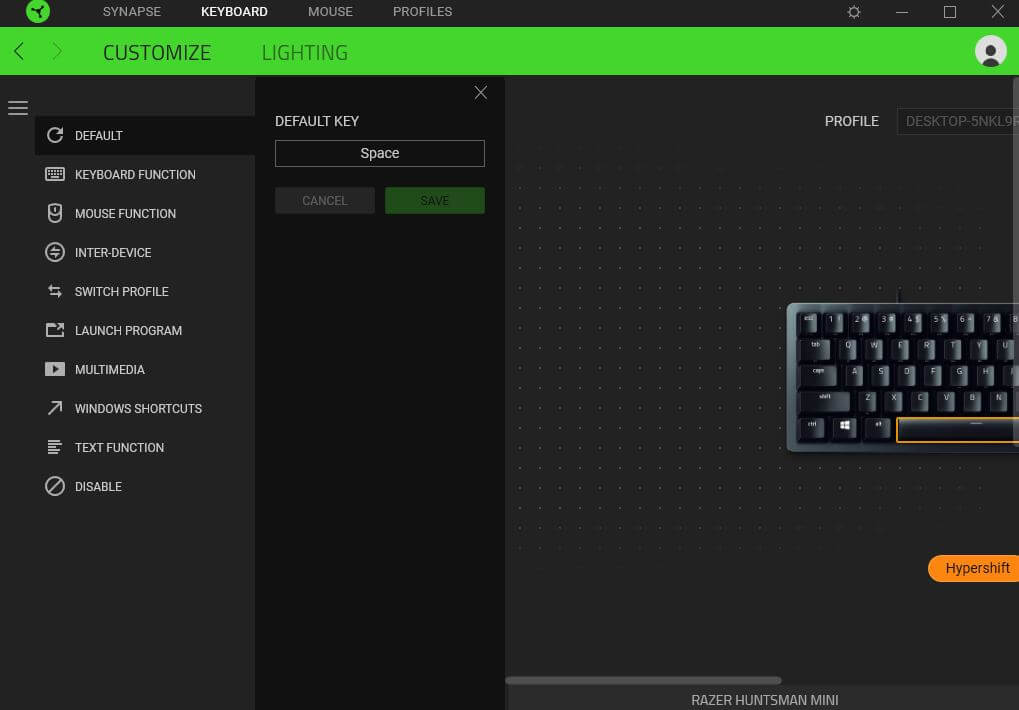 Once the formalities were sorted out, we put the Razer Huntsman Mini through a few games of Call of Duty: Warzone and Valorant. We also used it for crunching through several reams of text including the one you’re reading at the moment.

On paper, the Razer Purple optical switch has a 1.5mm actuation distance and 45g of actuation force. It also uses light to actuate a keypress which makes actuation nigh instantaneous. In effect what you have are a set of keys that are loud, responsive and very clicky. 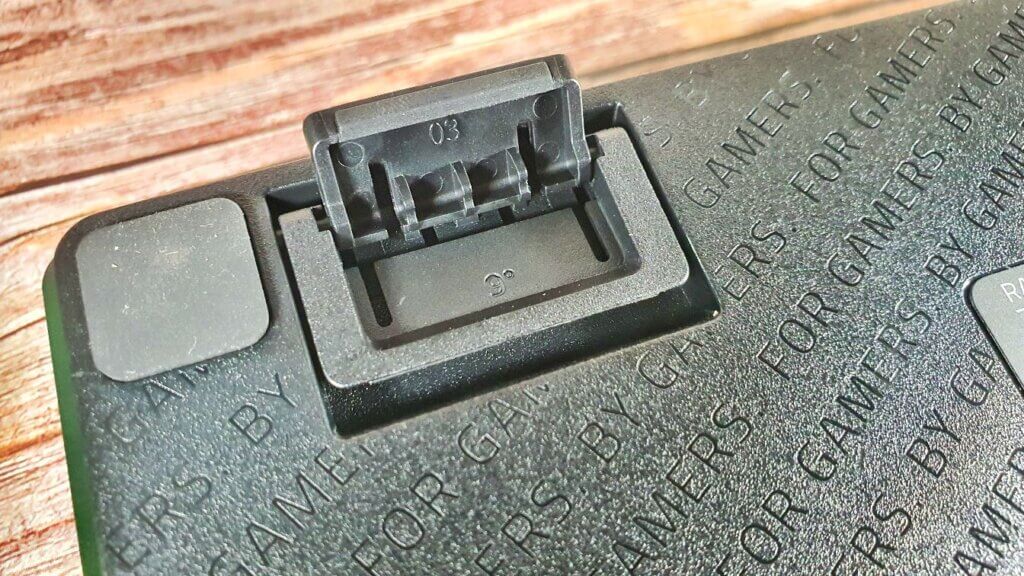 You can alternatively acquire the Huntsman Mini with quieter linear red optical switches which have a lighter 1mm actuation distance and only need 40g of actuation force with less noise than what you’d hear with the Razer Purple switches.

In terms of a practical user experience, the design of the Purple switches translates to a very responsive keyboard. While our K/D ratios weren’t appreciably improved, we did notice that what typically required a full keypress on a normal membrane keyboard could be achieved with a light tap on the Huntsman Mini’s Purple switches especially weapon swaps, crouching and jumps.  We have not had direct experience tinkering with Linear Red switches so we can’t objectively comment on its performance as yet.

For gaming, which typically requires less keys, the Huntsman Mini is nimble and swift on the draw. Its small size also enabled us to reposition it at more comfortable angles on the table that a typical full sized keyboard can’t achieve. 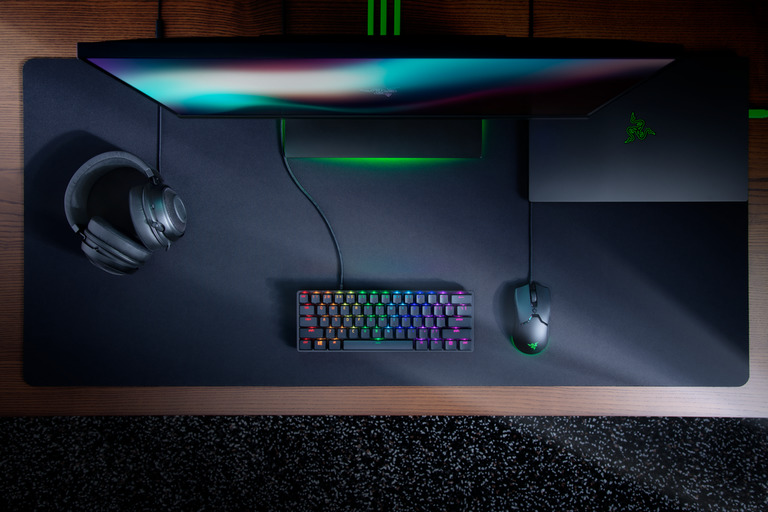 It’s a bit of a different story when it comes to paperwork though. Using it for paperwork beyond a couple of hours was tiring even after adjusting the kickstands in its two possible angles. When you’re writing long-form pieces and working on spreadsheets, you need all those extra keys on a full sized keyboard and having them around means it requires less finger gymnastics to get things done.

When using the Huntsman Mini for writing, it requires a significant learning curve and finger gymnastics that would make an Olympian proud and a physiotherapist raise their eyebrows. After a couple of hours, we needed to take a break before getting back at it again.

As a Southpaw, the Huntsman Mini is a bit of a challenge to use, the biggest pickle being that the Function key which is typically on the left side of the space bar is now relocated to the right in the Huntsman Mini. This means having to master performing Function key shortcuts with our off hand which isn’t the easiest thing to do when rushing deadlines.

While the shortcuts indicators are helpfully added on the keycaps facing you, they’re not backlit unlike the rest of the keyboard which means you have to constantly hold your keyboard up to figure out which Function key combo does what.

On a full sized and a tenkeyless keyboard, we can average a typical 100-110wpm but with the compact Huntsman Mini, we ended up with a few fumbles and got between 90-100wpm.  With practice, it’s very possible to get this up to our usual speeds but after a week in, we’re still fumbling shortcuts and keys. Getting the hang of the Huntsman Mini is not insurmountable but it will require some work.

The Razer Huntsman Mini plays to its strengths as a highly portable and compact keyboard that is ideal for its primary mission objective – being a darned good gaming keyboard. In that regard, the Purple optical switches are swift and responsive if rather loud. Beyond that narrow use case, the keyboard has a substantial learning curve and is an acquired taste if you aim to use it for other tasks like writing.

What we didn’t Sole function key is on right side of keyboard, alternate function modes on keys not backlit

We say The Razer Huntsman Mini with optical purple switches is a highly compact and wonderfully responsive keyboard that’s ideal for gamers and coders. It does however require a learning curve to master for those used to larger keyboards. There are also ergonomic issues for left handers in terms of key placement which makes it less than ideal for paperwork crunching duties. Like a Formula One car, the Huntsman Mini isn’t for everyone but for those who can overcome its foibles, it’s a potent performer indeed.

he Razer Huntsman Mini with optical purple switches is a highly compact and wonderfully responsive keyboard that’s ideal for gamers and coders. It does however require a learning curve to master for those used to larger keyboards. There are also ergonomic issues for left handers in terms of key placement which makes it less than ideal for paperwork crunching duties. Like a Formula One car, the Huntsman Mini isn’t for everyone but for those who can overcome its foibles, it’s a potent performer indeed.