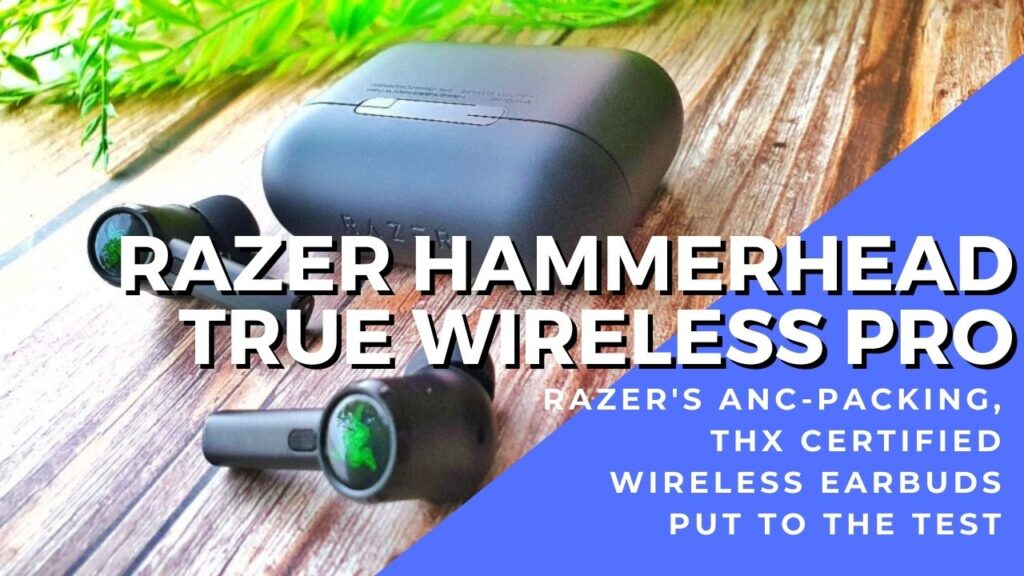 What’s in the Box and Design

Externally, the packaging of our Razer Hammerhead True Wireless Pro review unit is the classic version that’s one step behind the current Razer Green eco-friendly initiative. You get a solid cardboard box done up in Razer’s signature green and black livery with foam cut outs housing all the various components. Here’s what you get in the box for the Razer Hammerhead True Wireless Pro.

We’ve tested a fair number of other wireless earbuds but the Razer Hammerhead True Wireless Pro is the only one thus far that gives this many ear tips for you to choose from bundled in the box.

On paper, Razer says that the SmoothComfort Black Silicone tips are intended for extended periods of usage while the Secureseal Translucent Silicone Tips get a grippier finish for better noise isolation. They also bundle in a set of squishy Comply Black Foam tips that expand to fit your ear canal in order to offer maximum noise isolation. While the silicone ear tips come in small, medium and large sizes, the Comply Black Foam tips only come in a medium size.

You’re effectively getting a total of seven different alternative ear tips in different sizes and made of different materials to further optimise the fit for your ears. Thus far, the closest contender in this regard is the Klipsch T5 II True WIreless.

In terms of the comprehensiveness of the provided kit, Razer is up there with the best here.

Externally, the charging case comes in a low profile matte black finish that resists smudges and fingerprints nicely with the only indication that it’s Razer issued gear being a modest Razer monogram engraved in the top lid.

The charging case is tall like an elongated treasure chest with the base hosting a USB-C charging port. The front has an LED charging indicator along with a small notch to allow for easy one-handed opening. In keeping with contemporary design, the charging case edges have rounded edges, minimising the chances it would snag in your pockets.

Razer’s foresight in ensuring a taller form factor ensures that the case can indeed be opened with one hand with the hinges weighed just enough that you can slide it open with your thumb.

This is an improvement in terms of its predecessor the Razer Hammerhead True Wireless that had a flatter, more cylindrical shaped charging case that was harder to open and pocket.

The provided earbuds are also done up in the same matte black plastic as the case with a similar form factor to the Apple AirPods complete with a stem and bulbous driver housing. Razer does add a unique touch in the form of a rounded touch control surface emblazoned with their logo.

Overall build quality is solid, befitting Razer’s usual attention to quality in their gear and the little touches to make it easier to pocket are most welcome indeed.

Under the hood, the Razer Hammerhead True Wireless Pro comes with the following specifications:

This rigorous certification means that the earbuds will reproduce sound exactly as intended by content creators when played on the Hammerhead True Wireless Pro.

The provision of a plethora of different earbud sizes and types was a pleasant surprise but  after testing them all, I gravitated towards the Comply foam tips as they offered superior passive noise insulation on top of offering markedly better comfort than the other provided silicone tips.

Pairing the earbuds with a laptop or a phone is accomplished by simply flipping the lid open which prompts it to find a connection via Bluetooth. While it’s able to pair up and work straight off the bat, you’ll need to install the Razer Hammerhead True Wireless Pro app designed for it on your phone to access its higher functions.

Within the app, you’re able to customise equaliser settings to an intimate level or you can select from a number of presents that include Enhanced Bass, Vocal, Enhanced Clarity, Amplified and the eponymous THX mode. More importantly, it’s the only means to push updates to the earbuds.

You’re also able to tweak the controls to a degree that’s typically not allowable in other brands, allowing you to swap and assign functions as you see fit which is a welcome feature.

Unlike the rapid single, double and triple taps that are now a part of muscle memory for those of us using earbuds, the Hammerhead True Wireless Pro utilises a somewhat quaint series of ‘tap and hold’ features as the cornerstone of its interface. You have to tap the control surface, hold it down for a second or two and then release it. Presumably, this is to minimise the chances of accidents.

By default, a single ‘tap, hold and release’ either plays/pause a track or to take and end calls. A double tap lets you accept or switch calls and fast forward by one track. A triple tap rewinds to a previous track.

To access or exit Gaming mode, you need to triple tap and hold the last tap for at least 2 seconds on either earbud to enjoy vastly reduced latency for nigh instantaneous feedback at 60ms latency.

To turn on active noise cancellation you need to tap and hold the earbud to turn ANC on. Repeating the gesture again after this turns on Quick Attention mode and doing it again turns both modes off.

The customisability available here is by far among the best we’ve seen in any wireless earbud tested though it does lack one particular feature- volume control.

Hopefully in a future update there is a way to reassign a set of controls to manage volume though this isn’t a deal breaker as you can still do so via a paired device like a phone or laptop.

During the course of our Razer Hammerhead True Wireless Pro review, we found it to be quite an able performer indeed.

When put to the test in Call of Duty Mobile with Gaming  Mode on, the earbuds served up some jaw-droppingly good sound staging and directional audio with distinct reports based on what you’re firing off with the harsh staccato sound of an AK47 sounding very different from the angry buzzsaw of a PDW going off on full auto. Footsteps and sounds from your left, right and forwards sounded distinct and vivid.

We also subjected it to the opening scene for Baby Driver which has the protagonist and his rather inept associates conducting a heist to the tune of John Spencer Blues Explosion’s ‘Bellbottoms’. The initial sections offered good directional audio as cars rolled from left to right and the subsequent car chase sounded offered decent immersion.

In terms of music, the earbuds handled Pink Floyd’s eponymous track ‘Time’ with an impressive sound stage in its distinctive opening track of ticking clocks. Vocals were also handled relatively well with Joanna Wang’s dulcet voice in ‘Start From Here’ rendered due justice with good clarity and detail. The bass unfortunately was somewhat flat and our go-to bass testing track, ‘Prelude to War’ by Bear McCreary with its booming taiko drums didn’t sound as punchy.

Even with Gaming mode on and off, we weren’t able to detect a discernible difference or latency in sound and what was happening in-game though that’s not a knock on its capabilities. As a gaming headphone, it’s THX certification and impressively tuned 10mm drivers offer superior directional audio for gaming and movies.

Another feather in its cap is its effective combination of both active noise cancellation and passive noise insulation. The addition of the Comply foam tips provided an excellent seal from outside noises and combined with the built in ANC, it was able to sufficiently cancel out low level background noises like the background hum of a table fan without problems.

It also proved sufficiently comfortable for extended usage and was able to stay securely and comfortably in my ears while performing errands and even a round of jumping jacks.

In terms of battery life, the earbuds are on par with most competing offerings but unremarkable. A single session of music playback lasts just under the quoted four hours and the charging case has enough juice to charge it about four more times for a grand total of 20 hours of use which should last you a few days worth of return trips on the commute.

Razer Hammerhead True Wireless Pro Review – Is it worth buying?

The Razer Hammerhead True Wireless brings a lot to the table. You get a generous variety of ear tips that virtually ensures that you get a comfortable fit, deep control customisability and equaliser tweaking via the paired app and, above all, some of the best sound staging we’ve ever seen in wireless earbuds that makes it a preferred choice for gamers and a worthy consideration for more general users.

This is tempered by middling battery life and a bizarre oversight in that they’ve omitted the ability to directly control the volume in the earbuds but the latter is something that should be easily addressed in a patch update.

he Razer Hammerhead True Wireless Pro offers good sound with excellent sound staging, THX certification and deep ear tip and control customisability but falls short of greatness thanks to middling bass and endurance. If you can overlook these foibles, it represents an excellent choice for prolific gamers and movie junkies.

Battery life can be better