The latest addition to the Razer Basilisk range of gaming mice, the new Razer Basilisk V2 occupies an interesting position to its other wireless siblings and its predecessor, the original Basilisk. 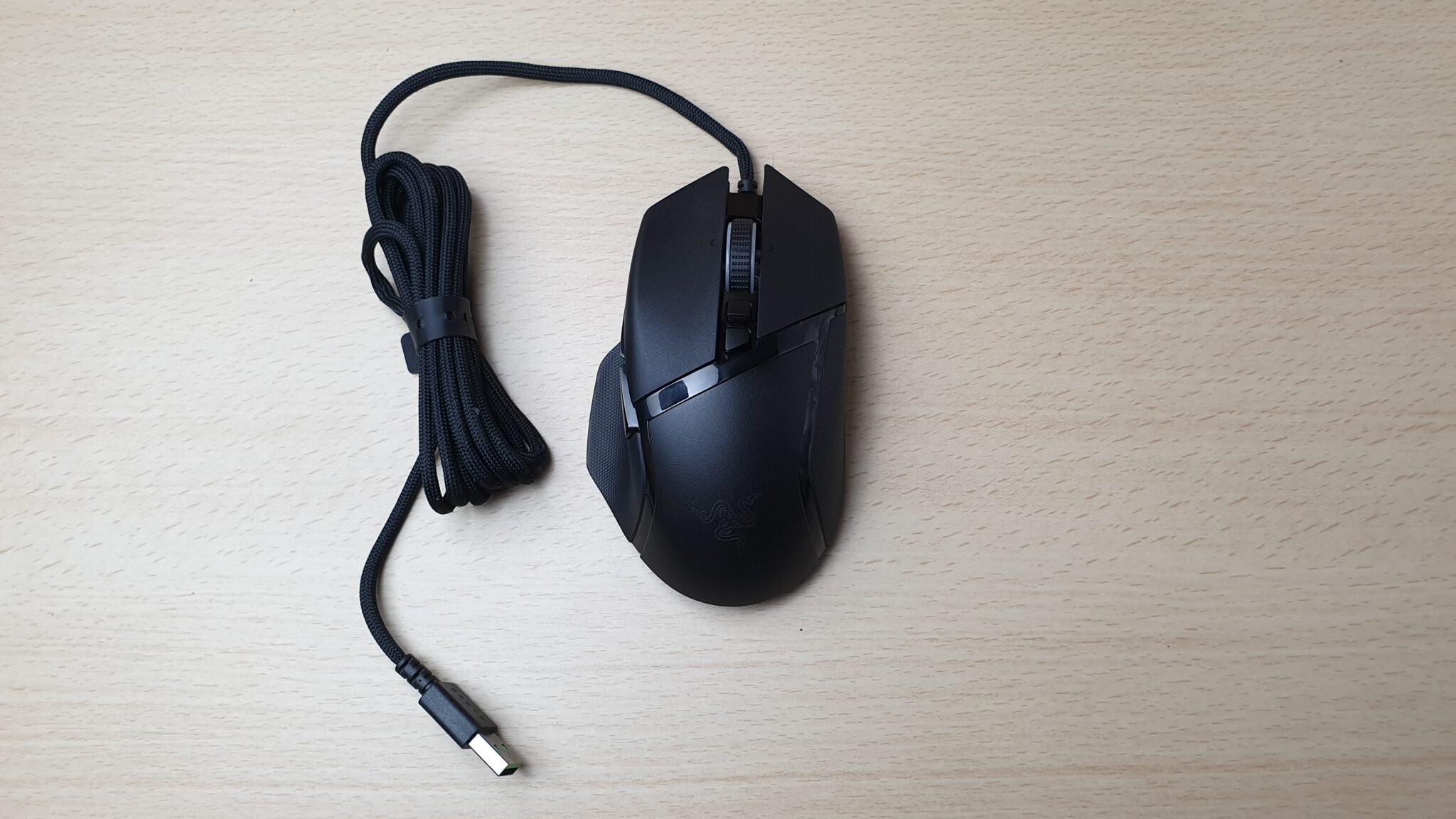 What’s so special about the Basilisk V2

On paper, the Basilisk V2 is a lightweight gaming mouse that represents a significant upgrade over the original Basilisk gaming mouse while offering a good number of features from the best offering in the Basilisk series, the Basilisk Ultimate, at a lower price tag while remaining a strictly wired gaming peripheral. 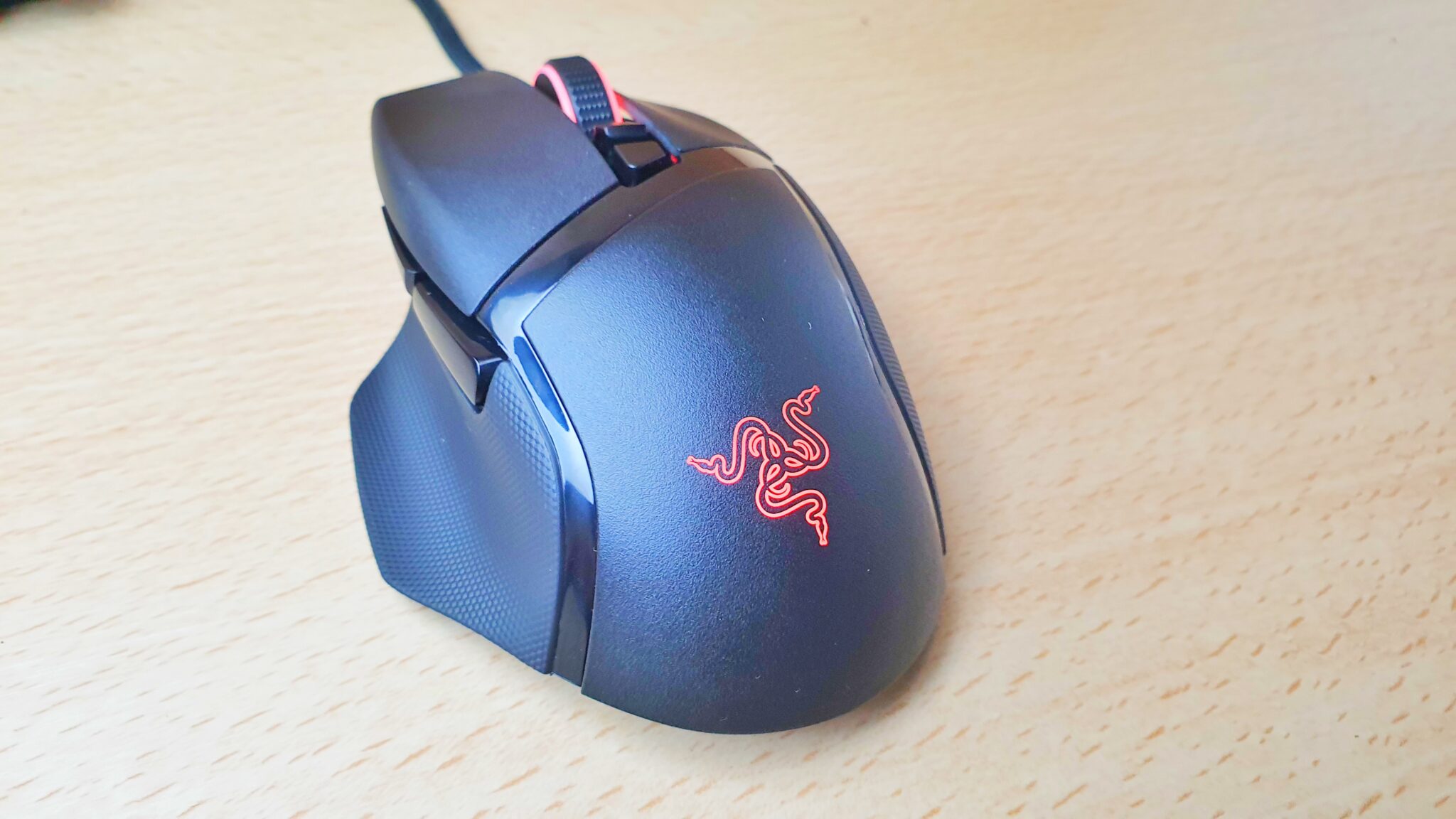 The Basilisk V2 off the bat also uses Razer’s own Focus+ optical sensor capable of anywhere from 100 to 20,000 DPI while the original Basilisk maxed out at 16,000 DPI. There’s also been a substantial redesign to make the whole affair more ergonomic which we’ll get to in a bit.

In keeping with Razer’s usual attention to quality and detail, the Basilisk V2 is an ergonomic delight that feels comfortable when held in a palm grip though it’s also able to be wielded claw-style as well.

It’s to Razer’s credit that every button on the mouse is within immediate reach of either your thumb or forefinger, which speaks volumes to their emphasis on ergonomic design though your mileage may vary if you have smaller hands.

Almost the entirety of the chassis is made of polycarbonate done up in matte black with a strip of shiny plastic running across and just below the scroll wheel and the left and right mouse buttons.

Both sides of the mouse have matte rubber textured grips for comfort with the thumb-side of the mouse hosting an extended rubberised thumb rest, two programmable buttons and an optional control paddle that you can swap out with a rubber plug if needed. 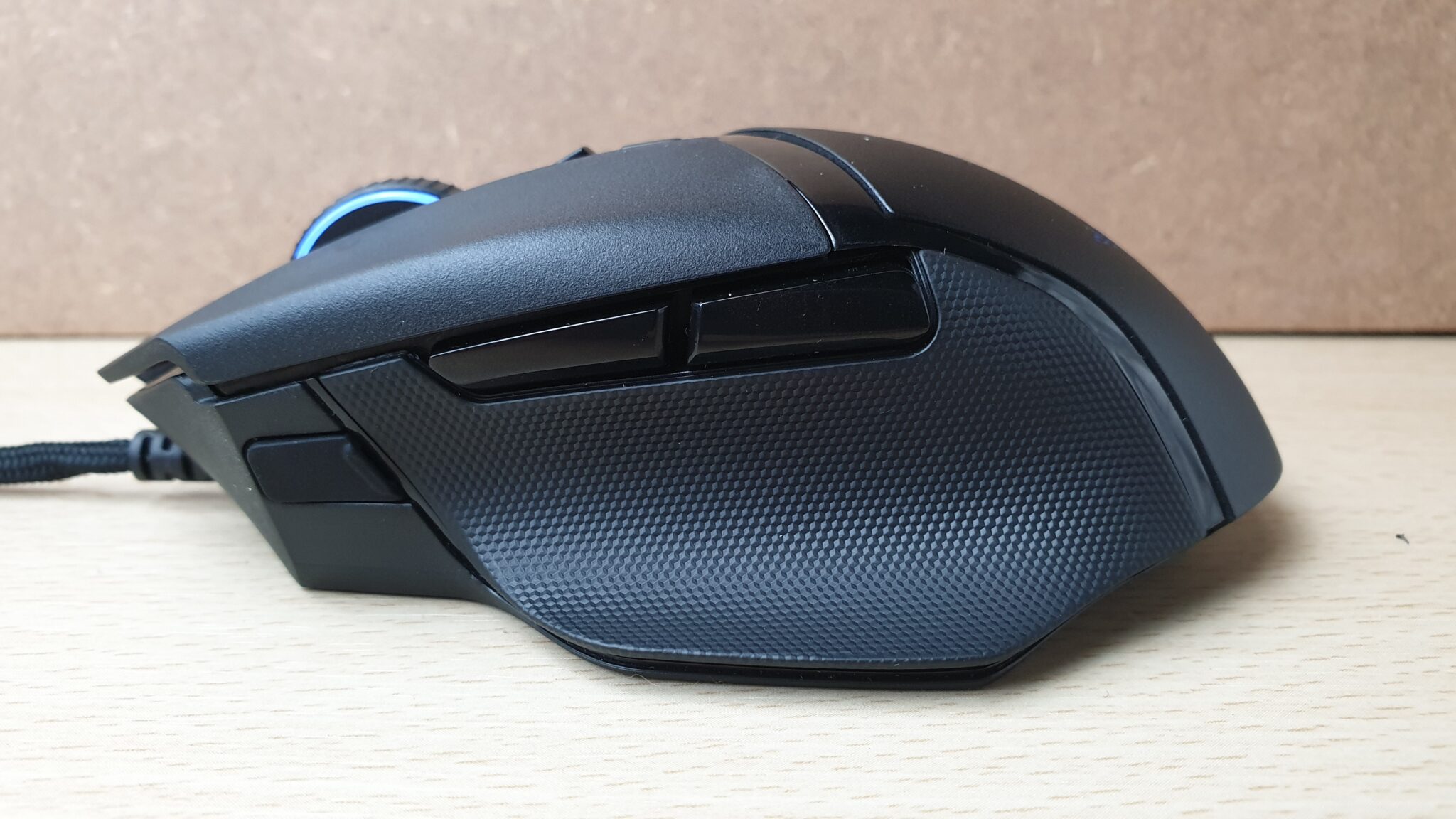 In keeping with Razer’s aesthetic style, the Razer logo at the base of the mouse along with the scroll wheel have RGB Chroma lighting with a number of effects available and over 16.8 million colours to choose from.

The underside of the Basilisk V2 has a quartet of PTFE-coated feet, a button to select which gaming profile you wish to load out of five available ones which you can configure via Razer’s Synapse 3 software on the PC as well as a wheel that lets you dial in the amount of resistance for the scroll wheel up top. 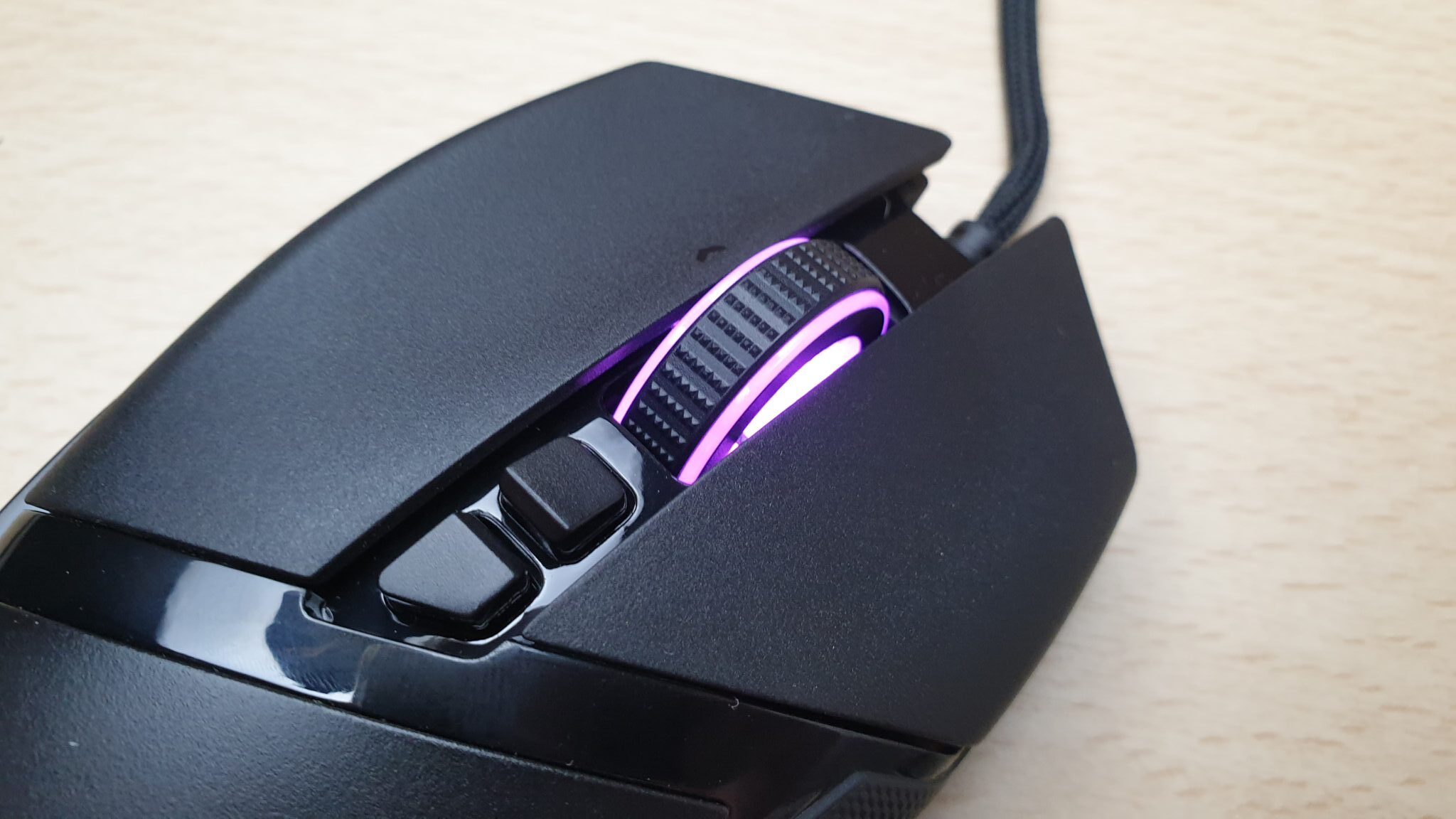 The top section hosts the obligatory left and right mouse buttons as well as an RGB-lit scroll wheel that also has a repeat scroll up and repeat scroll down function by moving the wheel itself to the left or right. If you’ve always been on the fence about having a very clicky or free rolling scroll wheel, you’ll love the Basilisk V2 as you’re able to dial the resistance up or down as you so desire.

Just behind the scroll wheel are a pair of buttons that allow you to adjust the Razer Basilisk V2’s DPI anywhere from 100 to 20,000 on the fly. The provided cable is non-removable and consists of about 2.1 meters of fabric-coated cable ending in a USB Type-A port with a heavy plastic sleeve on the vulnerable section just aft of the USB port and where it meets the mouse itself. 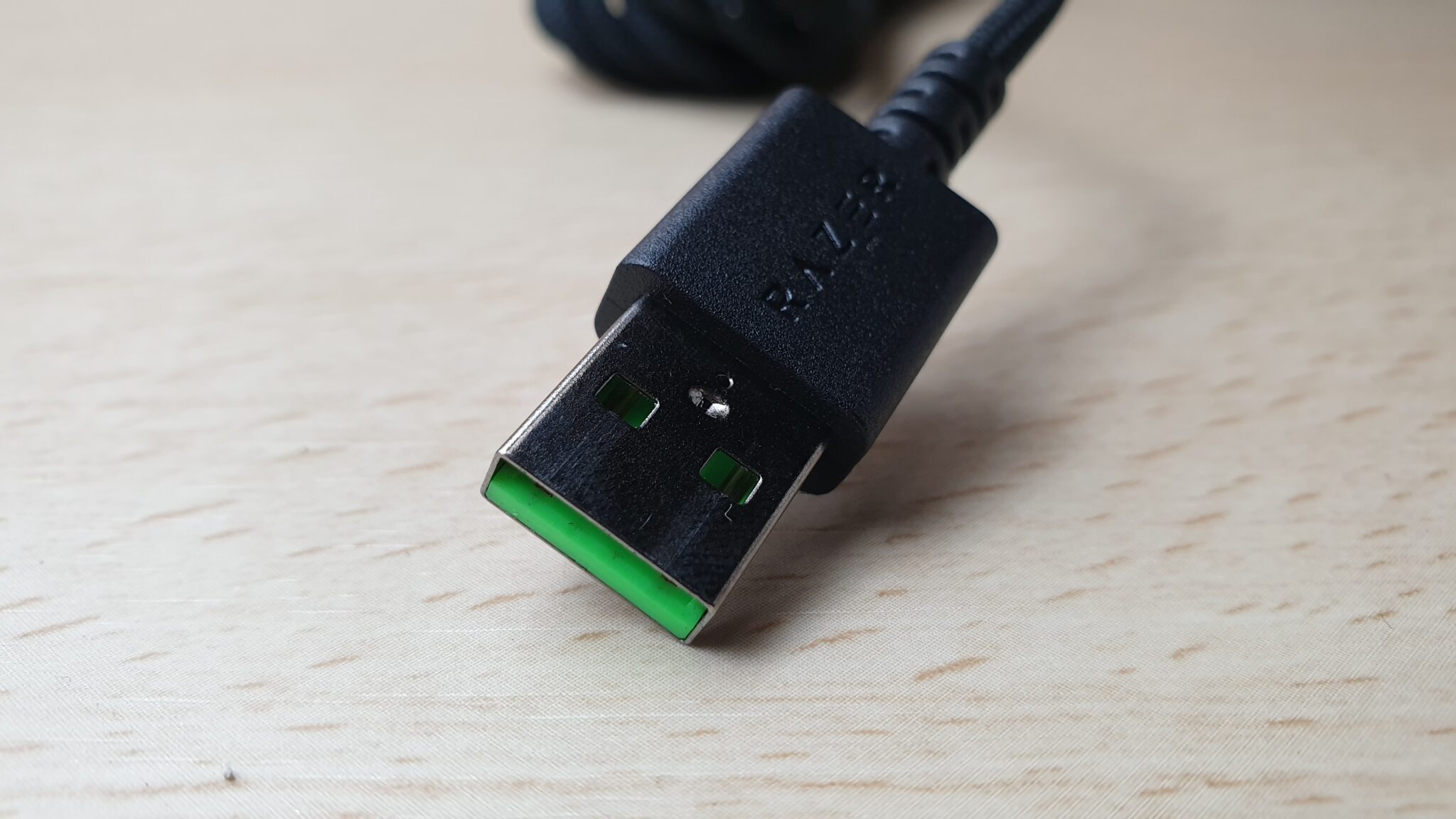 The cable itself, which Razer has dubbed as a Speedflex cable is both durable, highly flexible and light to boot along with minimal drag. This lightweight cable paired with the PTFE-coated feet both contribute to making the Basilisk V2 much easier to move around on a surface when gaming.


Getting the Razer Basilisk V2 up and running is as easy as it gets. There’s no need to install any complicated drivers or hunt about for the Razer Synapse 3 installer as everything is preinstalled on the mouse itself. Once you crack it out of the packaging, all you have to do is to hook it up to a PC via the USB cable and Razer’s Synapse app installs itself to your PC automatically.

The Razer Synapse UI is relatively relatively straightforward and enables you to manipulate the Chroma lighting patterns and more importantly, allow you to customise what each of the Basilisk V2’s buttons do. 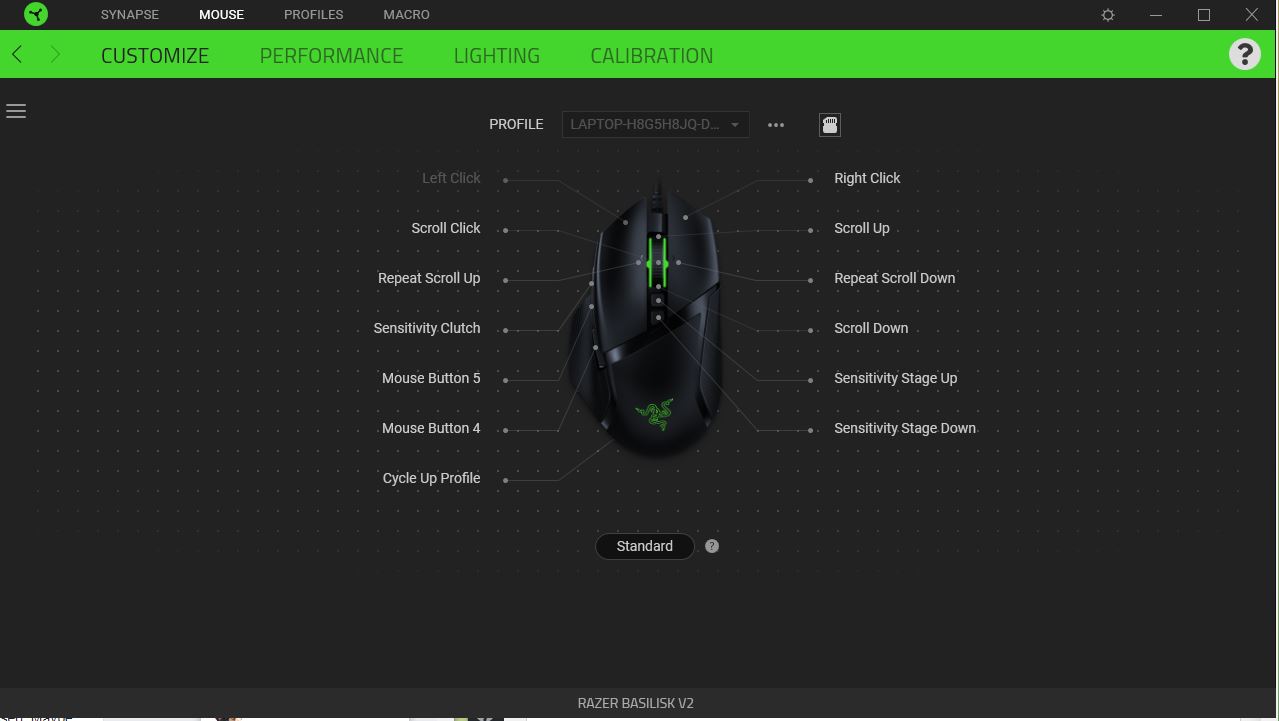 In the unlikely event that you need even more buttons, you can enable a HyperShift mode that adds another function to each button for a grand total of 22 potential programmable buttons that you can cram into the Basilisk V2.

In terms of ergonomics and tracking, we tested the Basilisk V2 across a variety of surfaces including a standard wooden flat top, a glass surface and that beloved staple of 2AM coffee raids – the plasticky formica tables at Mcdonalds, all of which it handled with deft aplomb, silky smooth tracking and exceptional responsiveness on account of its in-house Razer Focus+ sensor. 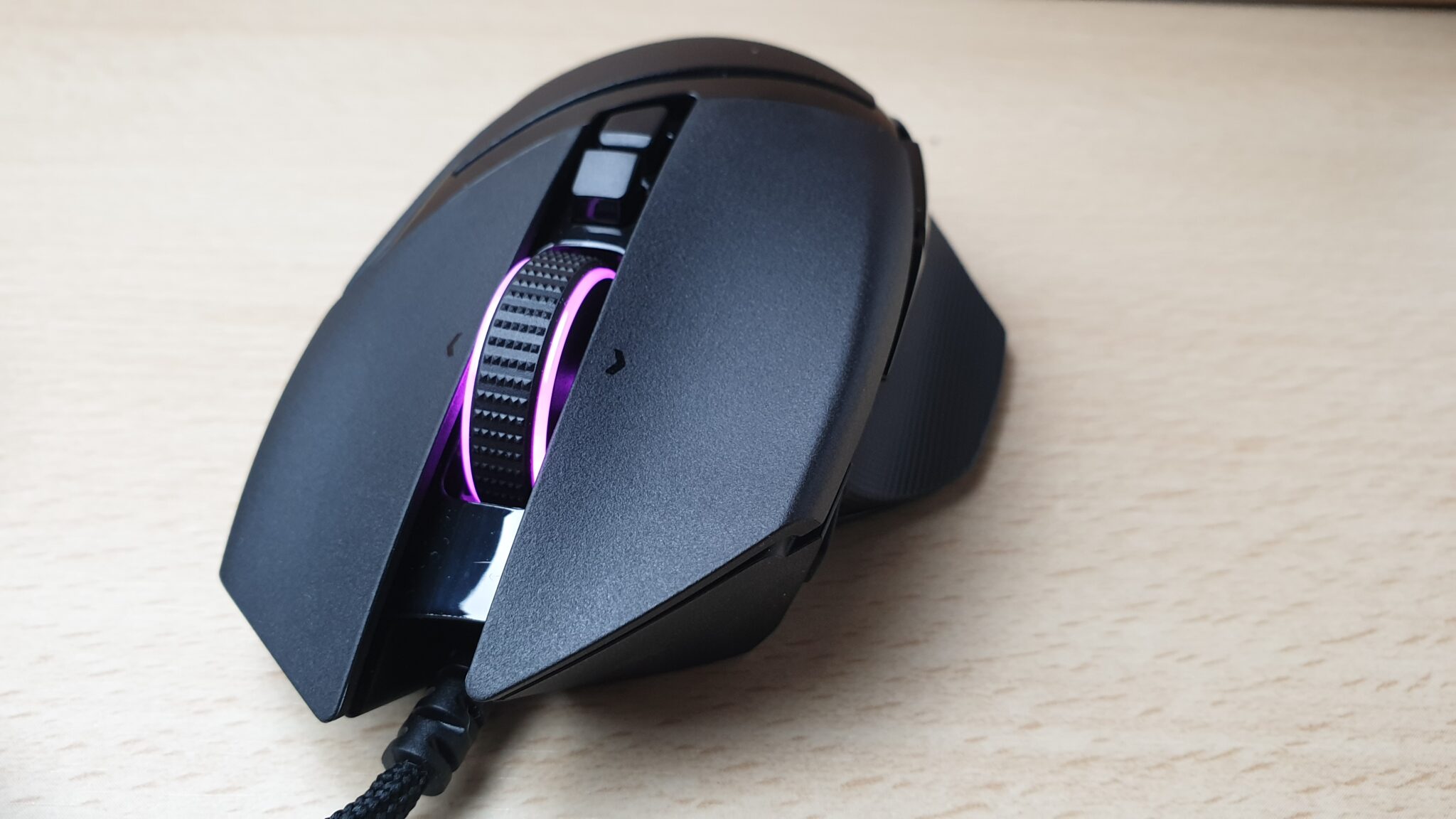 When put to the test, the experience was surreal, to say the least as we’ve yet to encounter a gaming mouse this light or this maneuverable. Its sheer customisability meant that we could tweak the scroll wheel to our desired level of resistance and modify almost every other aspect of the mouse via the provided Synapse app.

On the gaming front, the sheer number of buttons available allowed us to hotswap weapons in Far Cry 5 on the fly, throw frag grenades with just a press of a button and generally conduct acts of carnage in a far more efficient fashion. A more click-intensive game like Starcraft II needed a bit more setup time for all the macros to get loaded up but it otherwise simplified our workload in a match with construction shortcuts all pegged out for easy access. 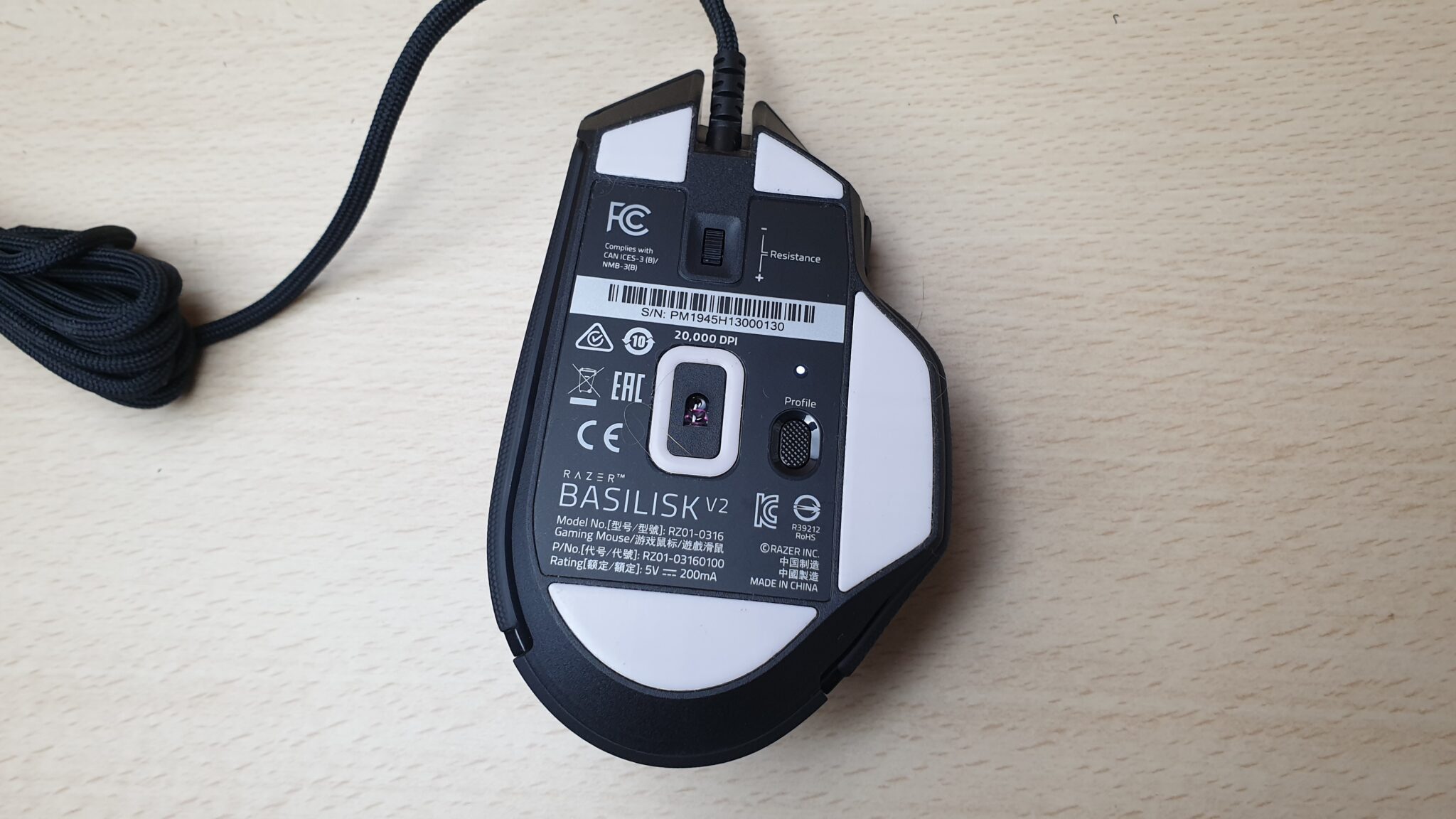 Supreme Commander is another tactical to strategic level RTS that’s pretty long in the tooth but which needs a ton more macros to manage an army that can span continents. The provision of Hypershift allowed us to massively simplify troop production shortcuts and made the process of commanding an army of hundreds of troops a matter of a few mouse clicks.

In terms of precision, the Basilisk V2’s Focus+ sensor is as accurate as it gets though the hair-trigger sensitivity when you’re gaming at 20,000 DPI takes some getting used to especially for aiming shots downrange in Far Cry 5 and FC5 New Dawn as well as CS:GO. 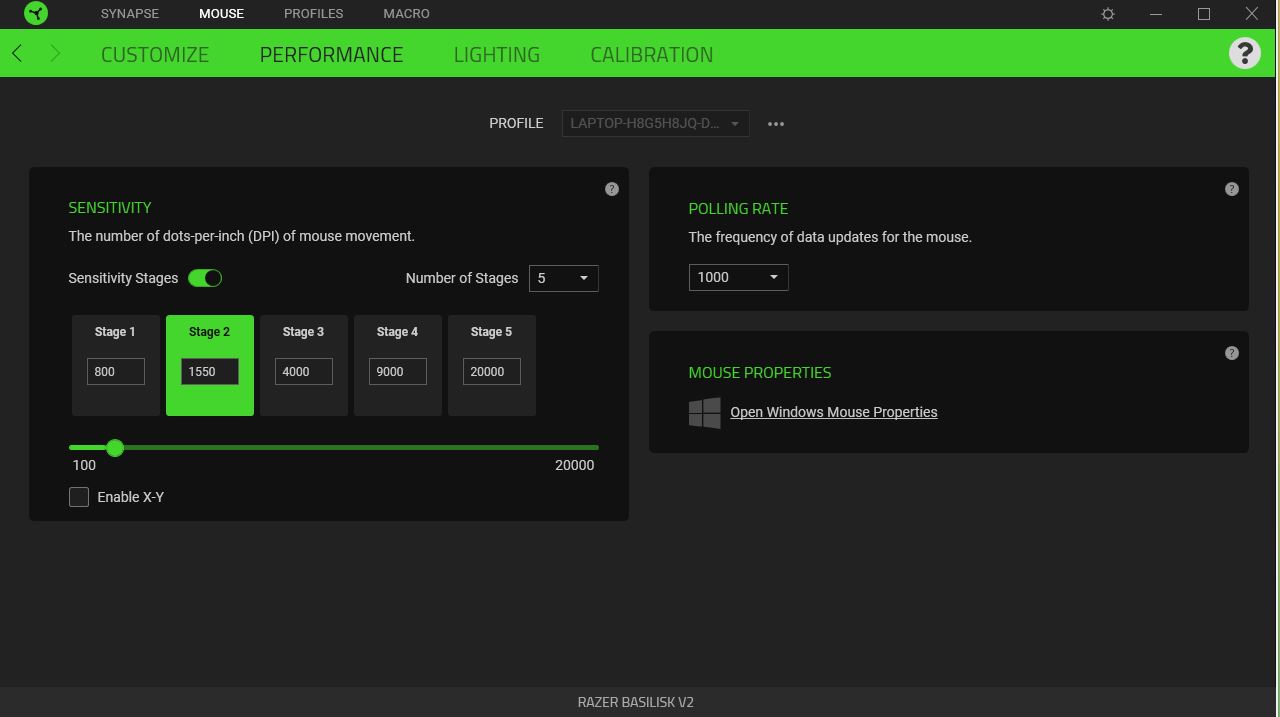 In non-gaming roles, the Basilisk V2’s scroll down and scroll up buttons on the scroll wheel were a very pleasant addition that made reading websites less of a chore while the thumb rest helped especially when performing extended tasks like laboriously processing spreadsheets and the like.

The five provided onboard profiles lets you change them for specific games that you play so that you’re never without your favourite control setup though having just five to tinker with is somewhat limiting for those with large game collections.

As gaming mice go, the Razer Basilisk V2 is a very solid wired option that is comfortable to wield, highly customisable and effective to boot.

What we liked Superb build quality, exceptional customisability with 11 programmable buttons, amazingly light, sturdy wired cable, incredibly responsive 20,000 DPI
What we didn’t Not for southpaws
We say The Razer Basilisk V2 combines an exceptionally light yet sturdy design, a tough yet light cable and superb responsiveness. If you’re desiring a wired gaming mouse with outstanding customisability, this ought to be tops on your wish list.