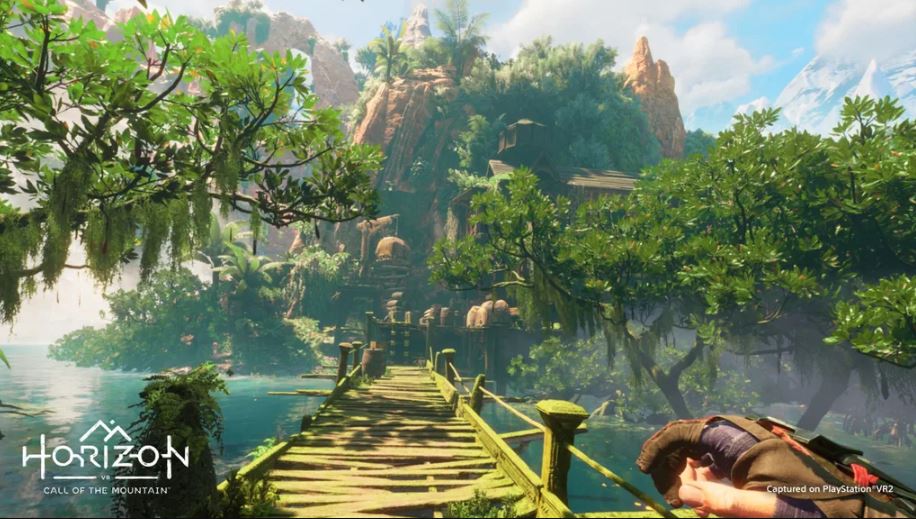 The PlayStation VR2 is Sony’s next-generation virtual reality rig for their latest console the PlayStation 5 that will offer 4K HDR visuals, eye tracking and haptic feedback on the headset itself for greater immersion and a pair of controllers to interact with virtual worlds. It’s early days but Sony has released snippets of gameplay that show upcoming titles on the PlayStation VR2.

Among the titles that were demonstrated for the PS VR2 were Horizon Call of the Mountain, Resident Evil Village, The Walking Dead: Saints & SInners Chapter 2 – Retribution and Star Wars: Tales from the Galaxy’s Edge – Enhanced Edition.

For PlayStation VR2 Horizon Call of the Mountain, you end up in the virtual shoes of a Shadow Carja grunt called Ryas who gets tossed into the wild with experiences that include engaging the local robotic fauna in combat with a bow, several hair raising climbing sequences and familiar scenery that Aloy likely would have traversed back in the main game.

You get to visit the titular village in an up close and personal fashion with the tense exploration and combat including the option to dual wield a pistol and a knife at the same time while engaging all the classic enemies seen in the game including Lady Dimitrescu and her daughters.

This survival FPS needs you to conduct active inventory management by digitally strapping on gear so you’ll have to manually reach over your shoulder to open your pack while conducting careful, high-stakes melee combat with all the usual melee weapons including the more popular assortment of small arms seen in most FPS games like rifles, shotguns and SMGs.

On display was an early mission with the game spanning multiple eras and characters from droid repair technicians to Jedi and even the infamous droid assassin IG-88.