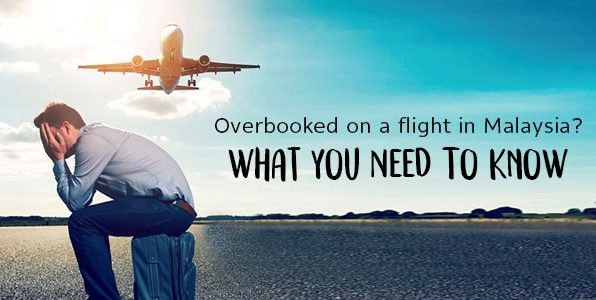 So you’ve booked your flight tickets, had a smooth ride to the airport and arrived a good two hours before boarding time. Then, somehow, you were told that your seat is no longer available.

The infamous United Airlines fiasco brought to light the ‘take any measures necessary’ approach airlines can make in the event of overbooking. This doesn’t happen only in the United States, it certainly happens in Malaysia as well. Audrey of fourfeetnine shared her experience; she was told her MAS flight was overbooked and bumped her to a later flight without her approval.

For profit reasons. Overbooking happens when airlines assume that there will be a number of passengers who won’t show up due to delays or last minute changes and therefore sell more seats than actually available on the flight. This is to ensure that the plane is always filled up as much as possible and generates maximum revenue for the airline. There are even special algorithms that help airlines to calculate and predict the percentage of no-show customers.

Even if this frustrates affected customers, aviation experts have confirmed that the practice of overbooking ensures ticket prices remain as affordable as possible. If the practice stops, ticket prices will increase (thus frustrating everybody). So to remain competitive, most airlines practice this.

What happens during overbooking?

Usually it’s a lot more civil than that. In many cases, travellers were denied boarding passes during the check-in stage. Everyone else had checked in so the remaining passengers are then reassigned to the next available flight.

If overbookinghappens after boarding pass issuance, airlines must first request for volunteers to give up their seats. Volunteers often get airline vouchers such as food vouchers, WIFI access, lounge access. In some cases, monetary compensation is offered as well. If there were no volunteers, the airline’s offer increases, especially in the monetary aspect. If you don’t have anything to lose by taking other available flights, take the money, why not.

If overbooking happens, all airlines should reassign you to the next available flight with no additional charges. Here are official policies of Malaysia Airlines, AirAsia, Malindo Air and Firefly.

MAS has the option of giving you monetary compensation though it depends on their own terms and conditions.This is what Malaysian Airlines have to say about this practice:

Overbooking is one service aspect where shortcomings are sometimes experienced on an airline industry. Normally on all flights, there are a few passengers who book seats and then change their plans without advising the airline that they no longer wish to travel. These passengers are known as “no shows”.

Generally, to enable these seats to be used by passengers who wish to travel, airlines would have to carefully balance between the number of seats sold and the anticipated “no show” is maintained.

Unfortunately, on rare occasions, this balance is not achieved and we then have no choice but to deny boarding some passengers, who try to check-in after the capacity is filled. Should there be insufficient passengers willing to give up their seats voluntarily; other passengers may be denied boarding on an involuntary basis.

However, when it does happen, passengers generally will be rebooked or rerouted to the final destination of the ticket presented at check-in by the first available flight(s) in accordance with our policy on such matters.

We will compensate the passengers who are affected according to the Standards for Customer Dispute Resolution of the KFTC (Korea Fair Trade Commission) Notification and Customer Protection Notification.

If you decide to cancel with AirAsia, they don’t offer financial compensation. At most, they would offer you travel credit, valid for the next three months. AirAsia’s policy is as below:

There is a chance a seat may not be available for you on your flight even if your booking is confirmed. This is due to the common practice in the airline industry of overbooking. In the event of such unavailability of seat, we shall at our option, either:

Malindo Air said that they would replace your flight, but any other form of compensation was not stated. Their policy is considerably shorter than the two airlines listed above:

Overbooking: In the event of overbooking, Malindo Air will make every effort to provide seats for which confirmed reservation have been made, however, no absolute guarantee of seats availability is denoted by the expression reservations, bookings, status OK or HK, and the timings attached to them.

Basically, if your flight is overbooked in Malaysia with any local airlines, you can expect to take the next flight as per industry standard. Other forms of compensation, especially in terms of financial compensation aren’t usually offered by the airline despite the amount of time lost and cancellation/amendment of travel plans.

Travel insurances do not cover overbooking per se, as the compensation should be offered by the airline itself. However, it is possible for you to claim under the coverage of travel delay, but only if the delay is over a certain number of hours.

For example, AIG’s Travel Insurance policy covers RM450 – RM3,600 and more (depending on the plan) for any form of travel delay for every 6 consecutive hours that pass. This means in the event of over 6 hours of delay, you can get both the airline’s compensation and claim for travel insurance.

This way, you at least get paid for the lost time or paid services that occurred due to overbooking . The compensation may help you recover financial losses, like the cost of missing a connecting flight or having to make impromptu accommodation arrangement.

Having travel insurance is helpful especially if your travel plans depend heavily on you arriving on time. Our free travel insurance comparison tool will help you to pick the best plan. Choose the one that compensates for travel delays.

So, what’s the conclusion?

Travellers are stuck. Most of us would be annoyed by unnecessary delays in our travel plans, but at the same time we also want affordable flight ticket prices.

The best thing you can do to reduce your chances is to check in early. A lot of airlines now give you the ability to check in online before the flight, so use that to your advantage and confirm your booking as early as possible. A late check-in will put you at risk of being denied during boarding pass issuance.

But if you’re already on the plane or waiting to board and the staff members are looking for volunteers to vacate seats, you can still opt not to volunteer or see if the compensation they offer is worth taking. If your travel insurance provides compensation for delays and you’re not in a hurry, it might even be rewarding.

*This featured article is reproduced from GoBear’s official site that features the latest news and tips in financial news, credit card and loan comparison tips and much more. #FollowTheBear