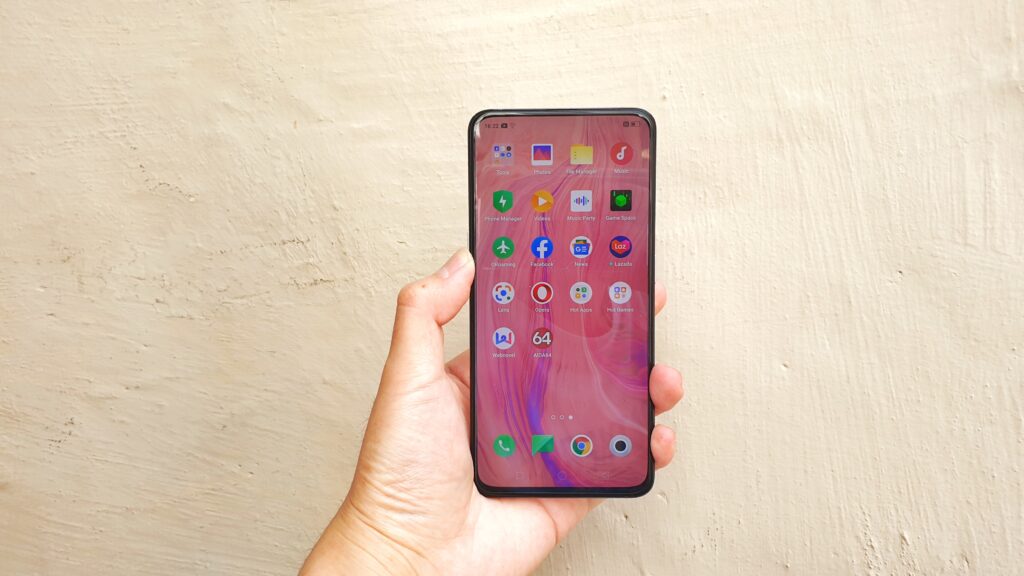 The OPPO Reno is a smartphone intended for the fashionable as it has a surfeit of good looks blended with a distinctive ‘shark fin’ style pop-up selfie camera along with a rather interesting set of specifications. This particular variant, done up in a shade of what OPPO calls as Sunset Rose is likely the most fabulously fashionably looking paint job of them all from the existing Ocean Green and Jet Black hued variants that were launched earlier.

This emphasis on style is carried out all the way to the packaging and the OPPO Reno comes with an unusually long box that holds the phone and a selection of interesting goodies within it. Pop the box open and you get a protective casing for the phone, the phone itself, a VOOC Flash Charge 3.0 compliant cable, a USB 5V/4A charger and a pair of earbuds done up in white plastic. 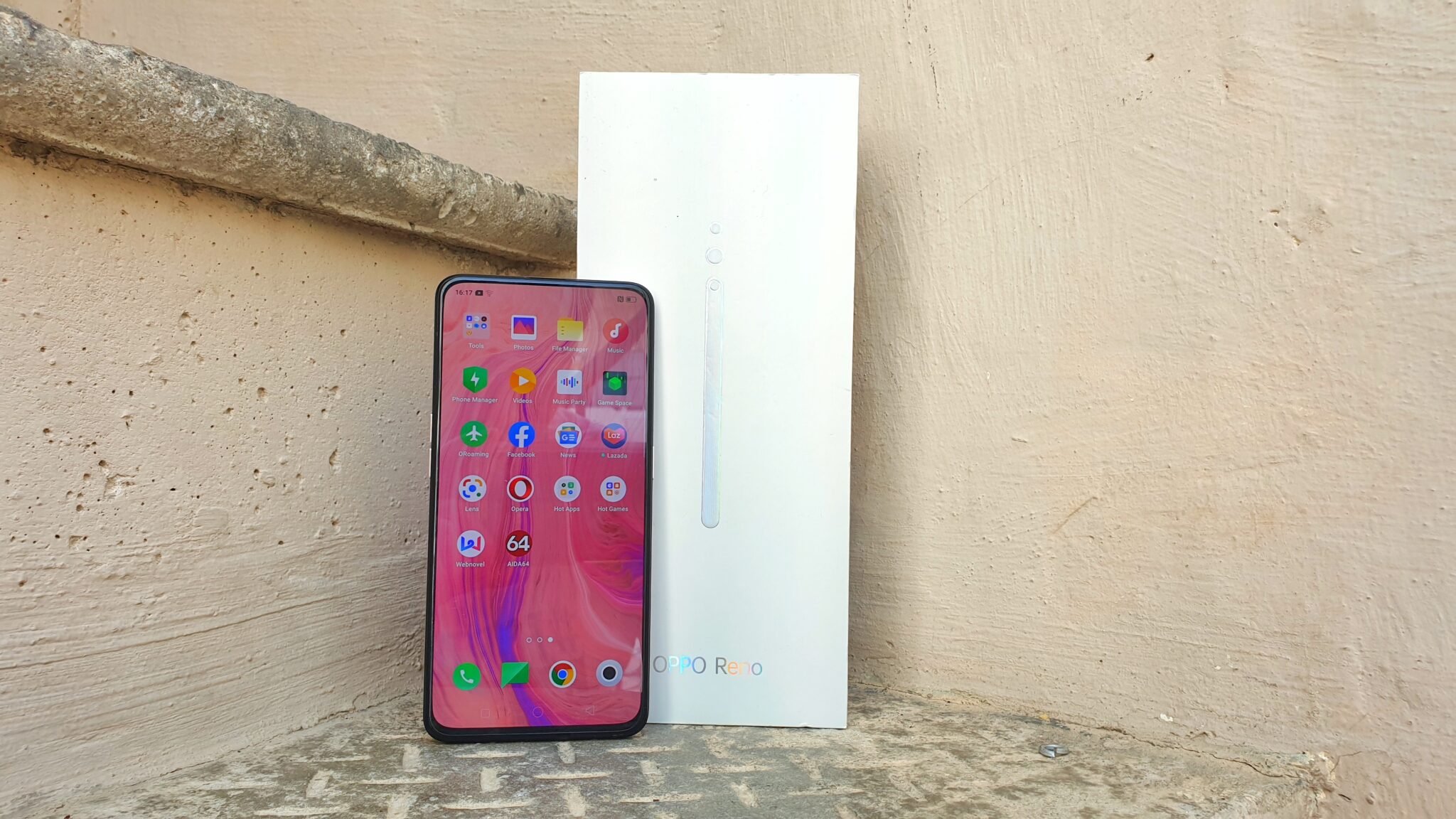 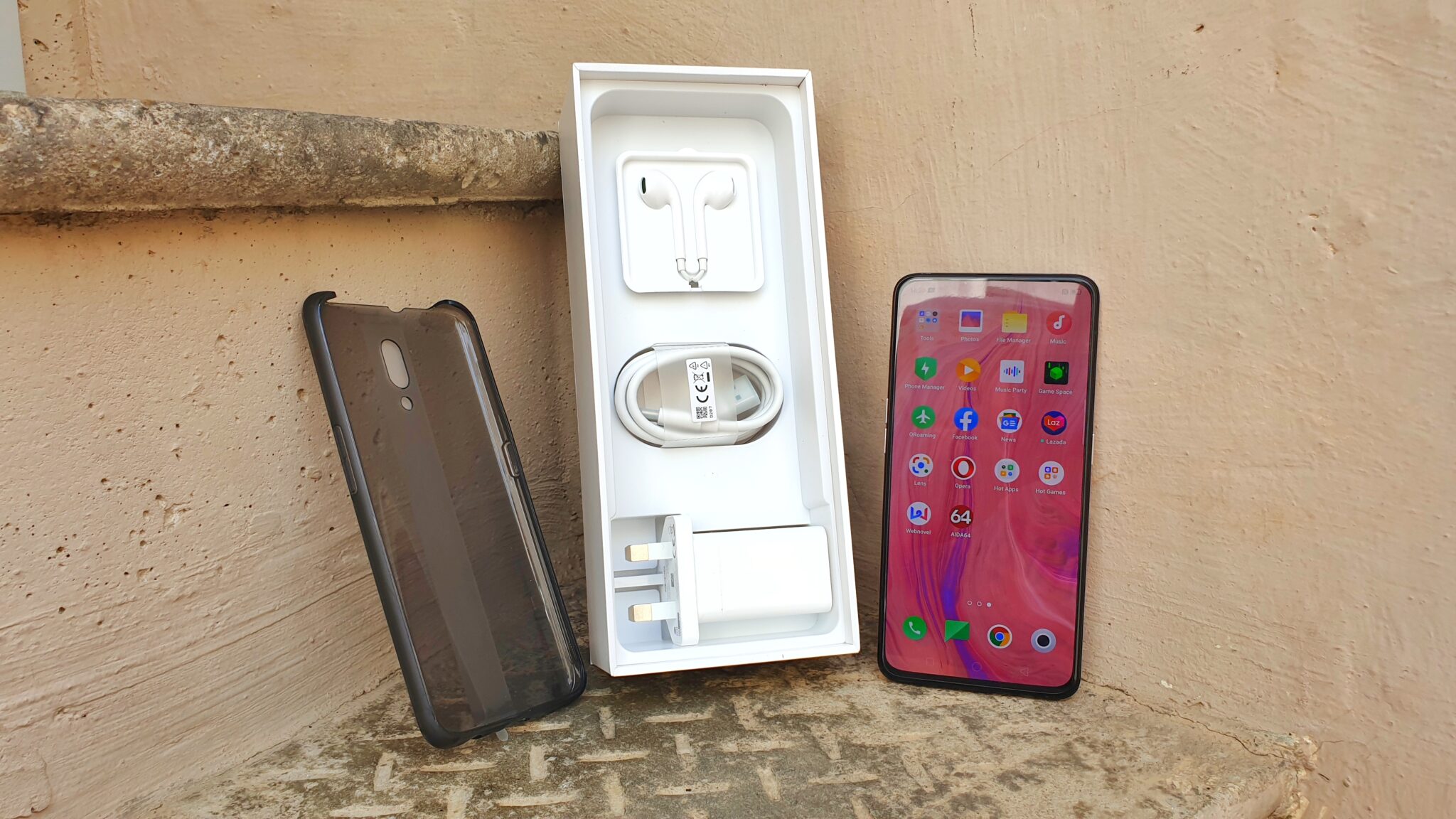 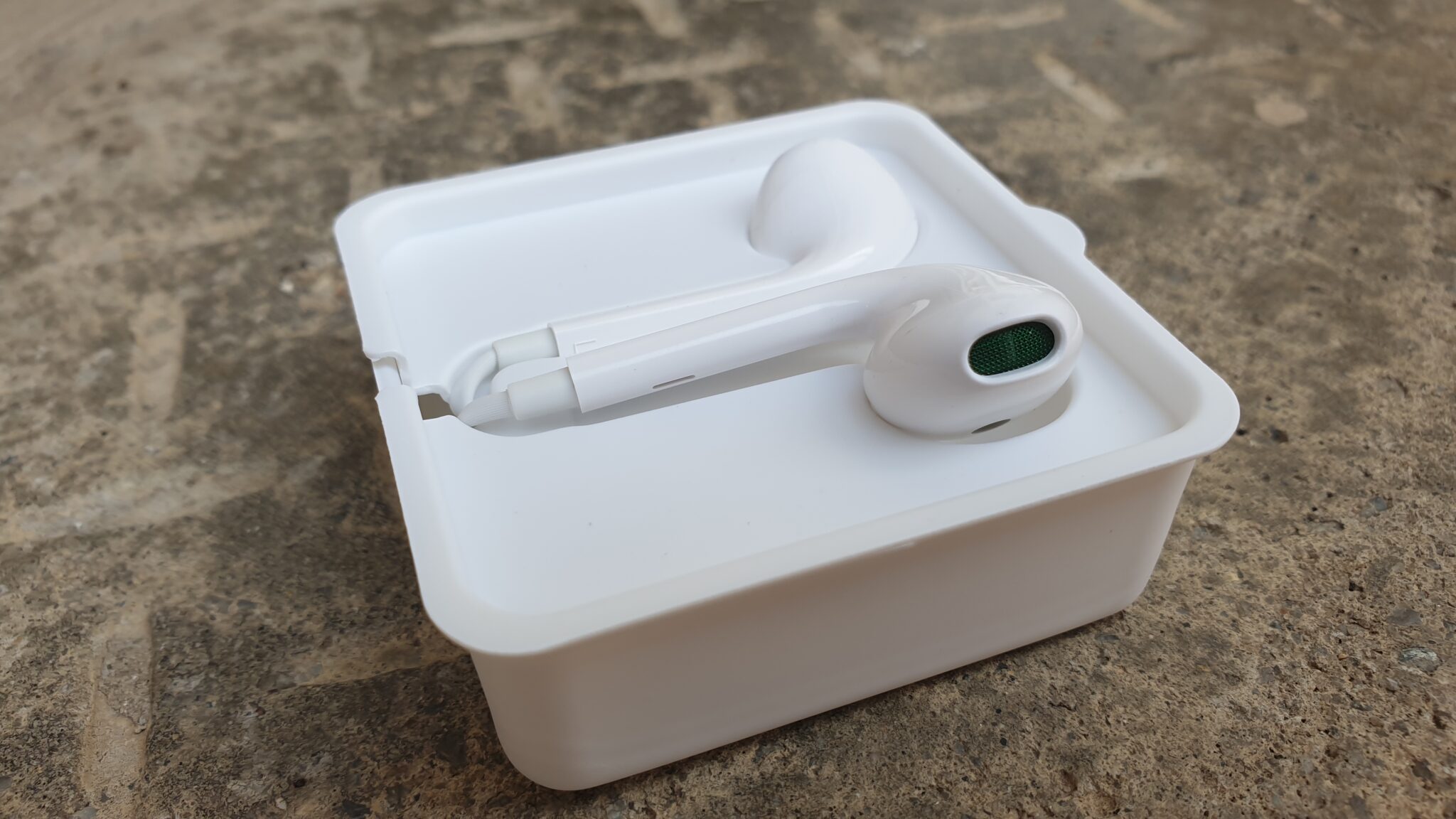 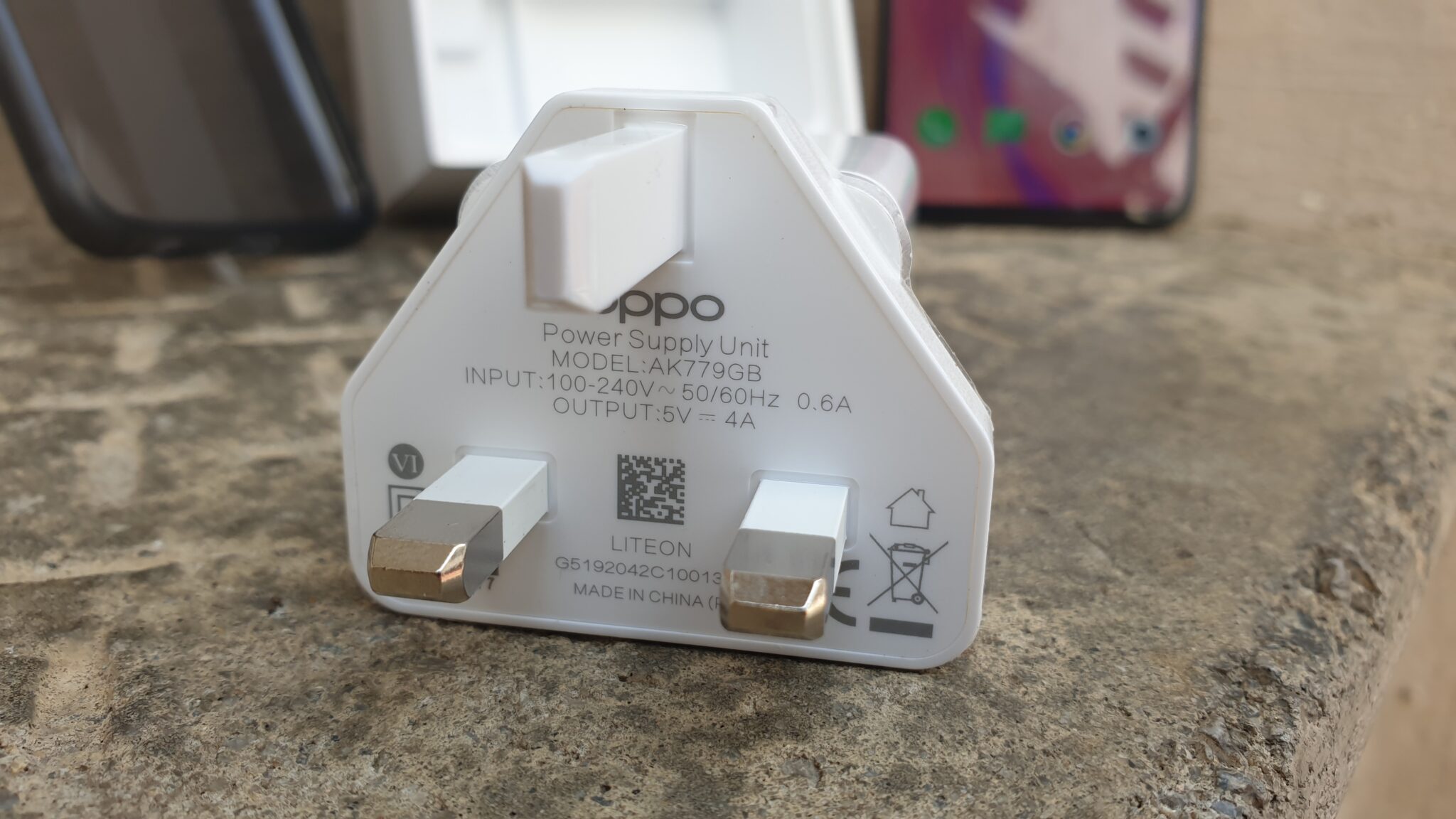 Placed symmetrically in the upper middle of the backplate is a vertically emplaced dual camera that hosts a primary 48-MP F/1.7 camera with a Sony IMX 586 sensor and a secondary 5-MP F/2.4 camera.

Oddly, the backplate of the Reno Sunset Rose also hosts a quaint looking raised dot rimmed in green trim. According to OPPO, this O-Dot, as they are wont to call it, acts to raise the camera array slightly if you’re placing the phone face-up to prevent scratches while also performing double duty as a sort of fidget ring/dot or what-have-you. It’s an elegantly simple solution indeed. 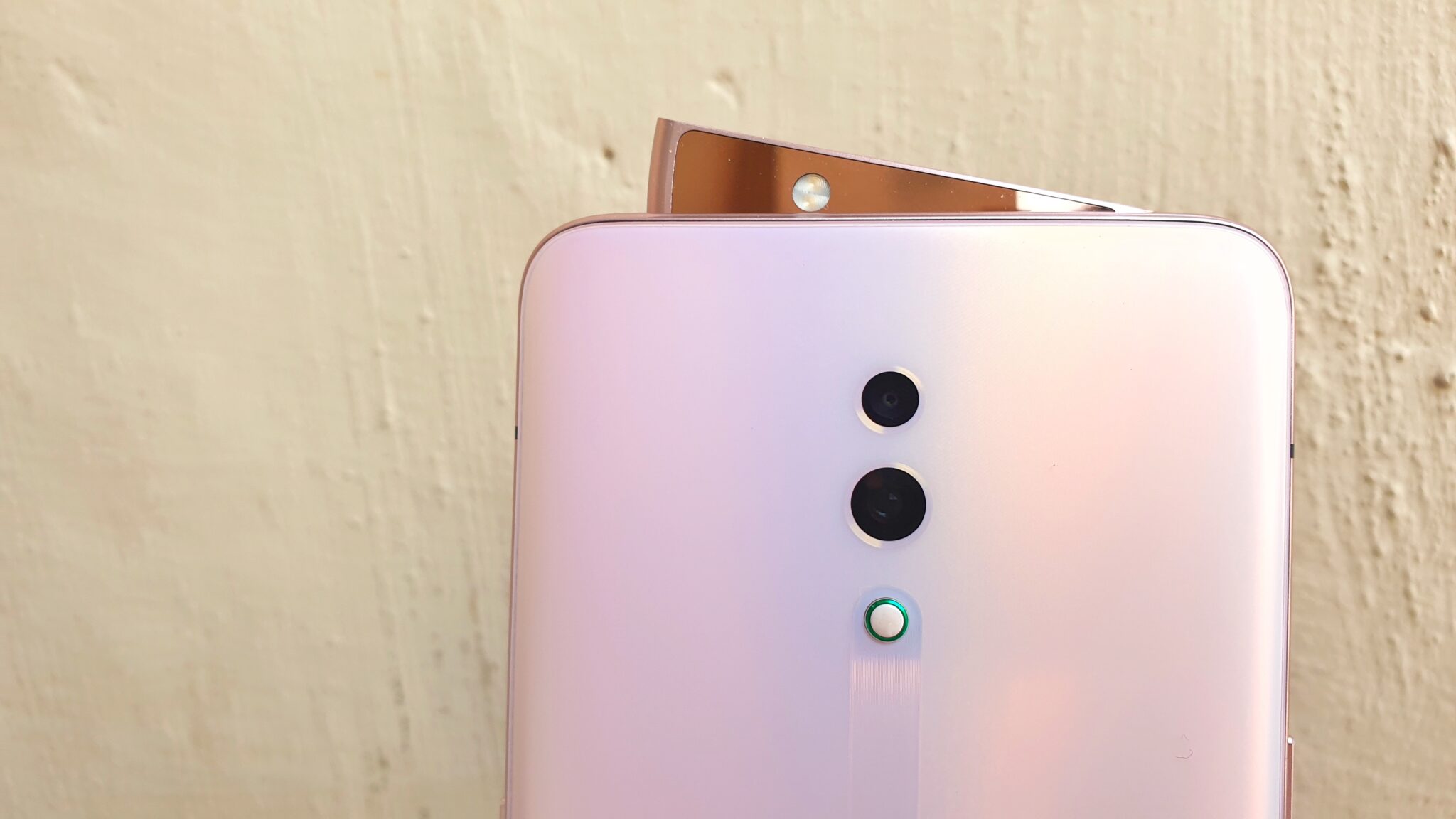 The left side of the phone hosts a volume rocker, a hybrid SIM card tray as well as one of a pair of matching antenna bands. The right side comes with the power button along with the corresponding antenna band.

The base of the OPPO Reno Sunset Rose hosts a 3.5mm audio jack, a USB Type-C charging port and a grille for the mono speaker. Up top, the phone hosts the unusual shark-fin shaped pop-up mechanism for the 26-MP F/2.0 selfie camera. Befitting its aspirations, the mechanism doesn’t so much pop up as it does rise in stately fashion, taking 0.8 seconds to do so to an 11-degree angle. It’s not the fastest draw in the proverbial west but it certainly looks classy doing so. 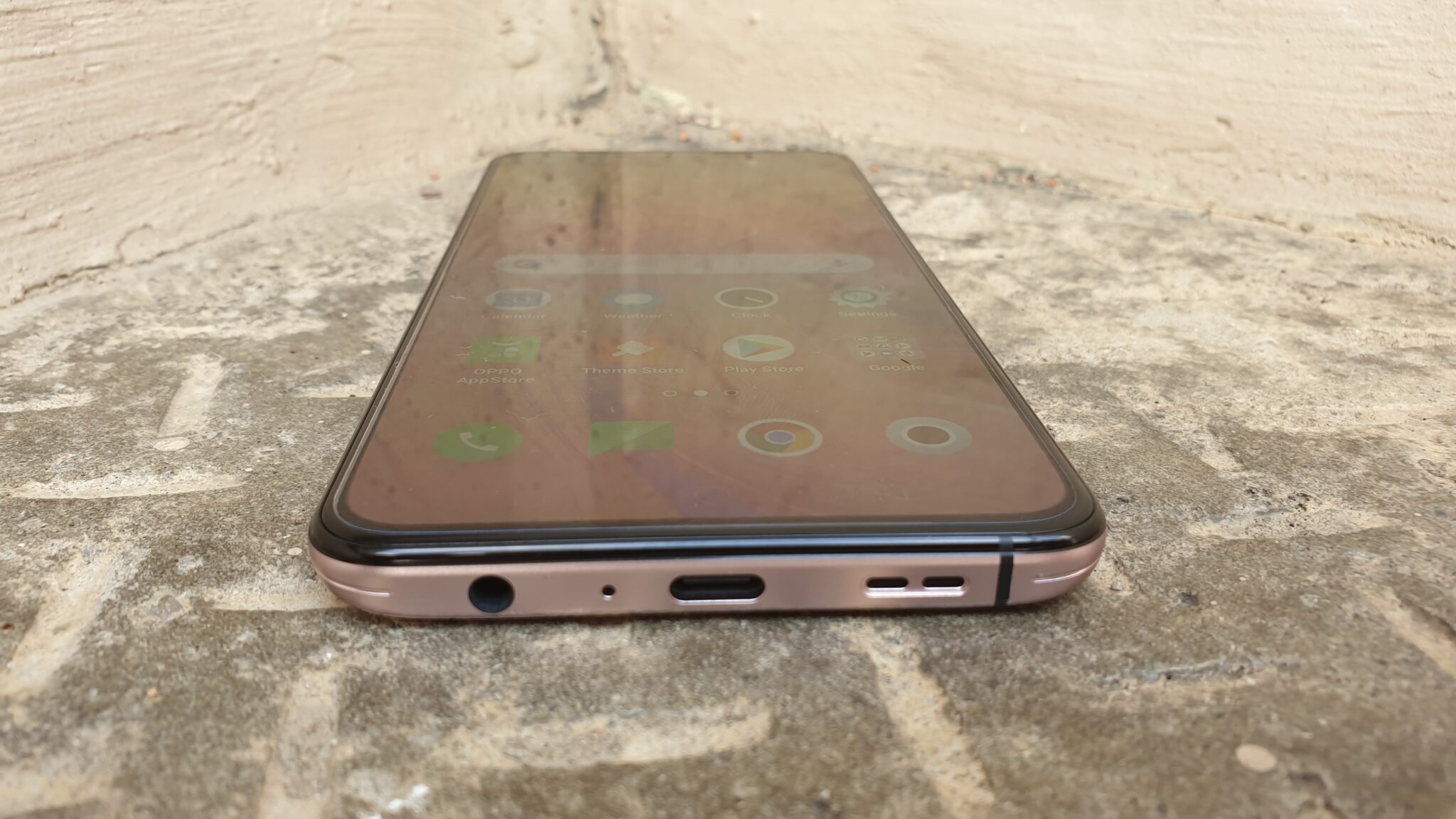 OPPO has also taken great pains to protect the pop-up mechanism and sports free-fall protection with an accelerometer swivelling it shut if it detects a drop. The mechanism is also rated for over 200,000 movements which is almost an eternity as phones go.

Up front, the OPPO Reno Sunset Rose bears a huge 6.4-inch Full HD+ display that has neither a notch or cutout on account of the pop-up selfie camera mechanism. To ensure that the OPPO Reno’s massive AMOLED screen retains its 93.1% screen ratio, they’ve even ditched the usual fingerprint reader for an under-display fingerprint reader.

Under the hood, the OPPO Reno runs the latest Android 9.0 overlaid with their ColorOS 6 user interface on a Snapdragon 710 octacore processor. This is paired with 6GB RAM and 256GB of storage which gives it more than enough power to tackle most daily tasks including gaming. Powering the whole affair is a 3,765mAh battery which ought to offer all-day battery life.

At first blush, the OPPO Reno feels well built and polished with its distinctive shark-fin pop-up mechanism lending it a very unique look among the plethora of slab-shaped pop-up cameras festooning phones of late. Powering it up and running it through a YouTube binge, casual web browsing and a spot of PUBG yielding pleasingly fast response times though the jury is out until we thoroughly put it through its paces. In Malaysia, the OPPO Reno in Sunset Rose retails for RM1,999. More detail swing by https://www.oppo.com/my/smartphone-reno/specs/ 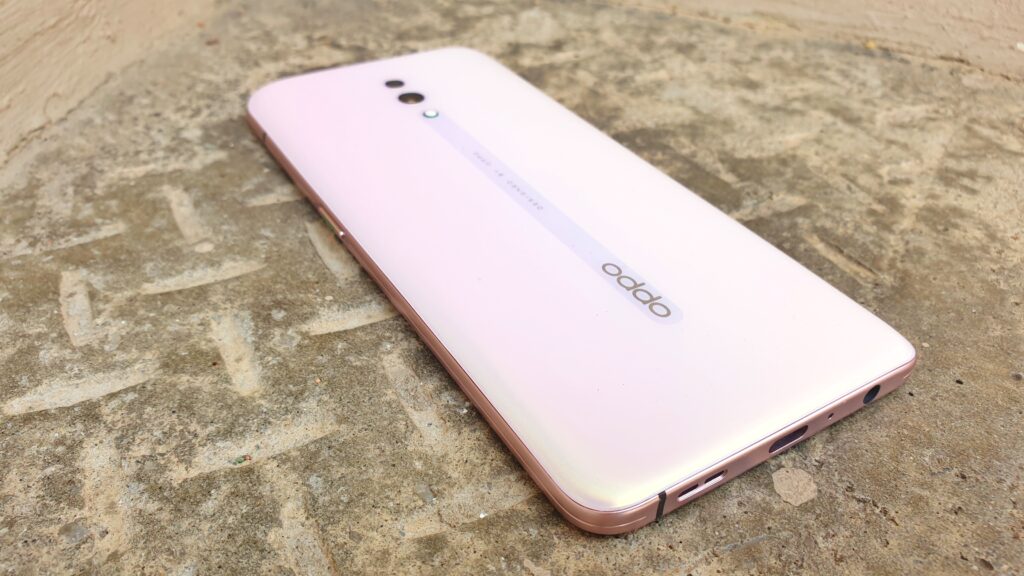