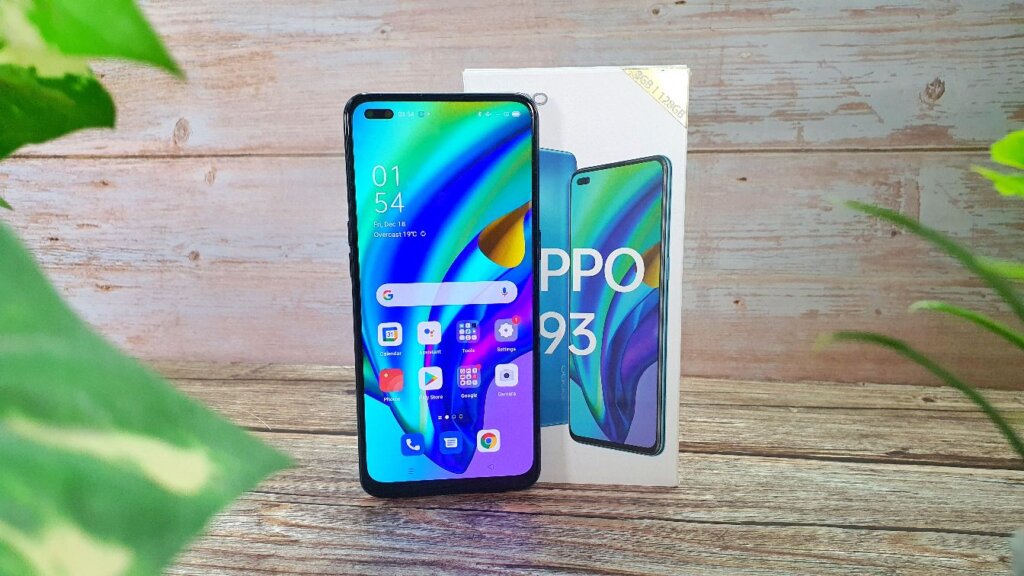 The OPPO A93 occupies an interesting niche seeing as it is one model number removed from the existing A92 that is still in current service in Malaysia. Seeing as they’ve repriced the A93 down to RM1,199, it has now become a competitive phone for its price range with an equivalent price point to the A92. Here’s our review where we put the OPPO A93 to the test to see how it fares…

The OPPO A93 includes a comprehensive assortment of kit with the box that covers all the basics. Our Malaysia retail unit came with the following items

This is quite a substantial bonus and you get everything you need to use the A93 straight out of the box. One thing to also note is that they’ve also pre-applied a screen protector to the OPPO A93’s display which also saves you a bit more cash. 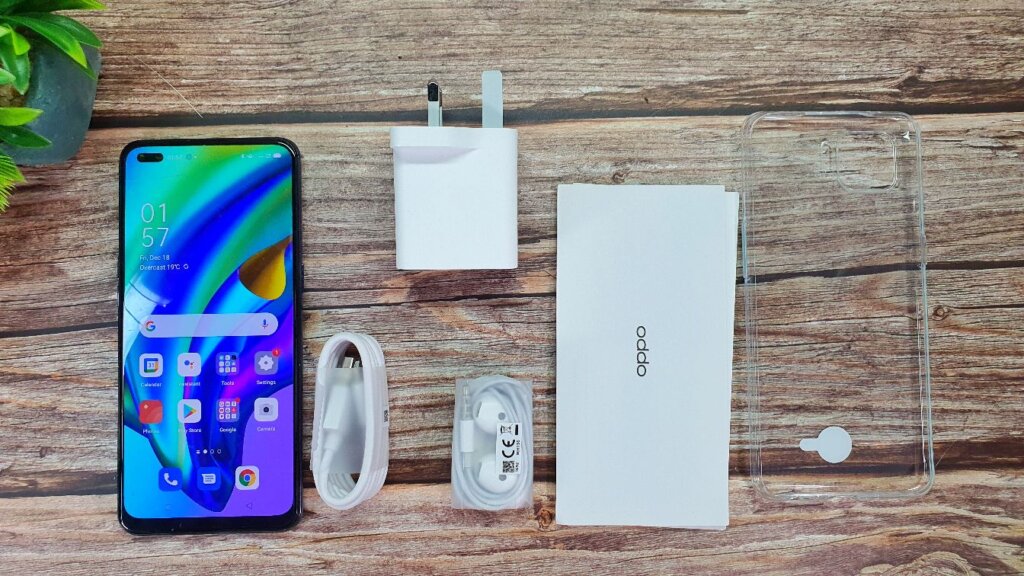 OPPO A93 Build and Design

Externally, the OPPO A93 differs quite a bit from the A92. Where its sibling went for striking colour gradated paint jobs, the A93 instead goes for a more utilitarian dual-tone finish much like a sports car.

The back of our test sample was a dark metallic silver with a matte dark strip running down vertically across it with a quad camera array perched on the upper left. Novelty aside, it does look rather distinctive and pleasantly classy despite its price point. 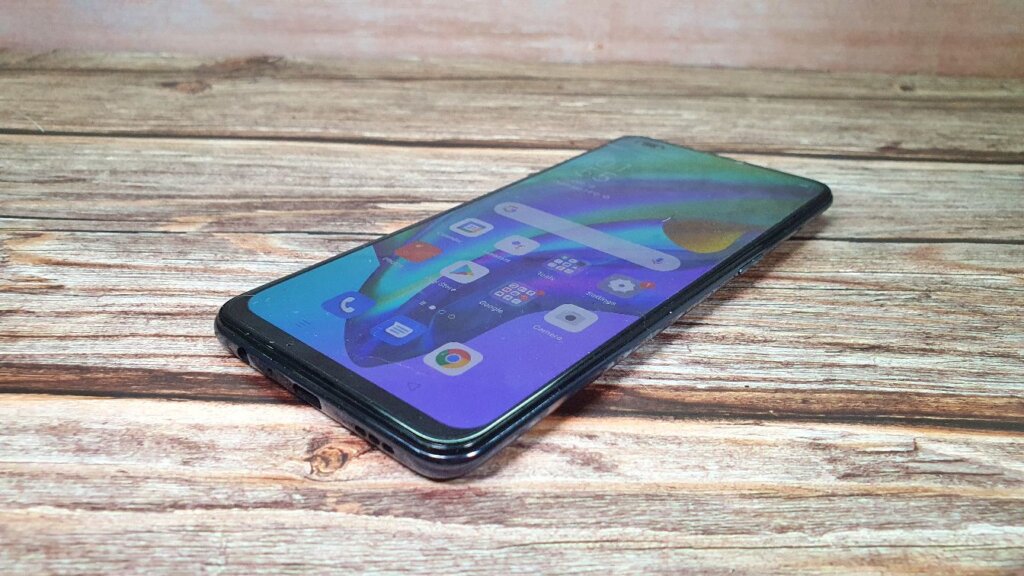 The left side sports a volume rocker and a triple card slot (two Nano SIMS and a microSD card) while the right hosts a power button. The base has a USB Type-C port and a grille for the mono speaker. Up top, the phone is otherwise bare.

Up front, the OPPO A93 hosts a pleasantly large 6.43-inch Super AMOLED display with a compact pill-shaped cutout for the dual selfie camera. The display also has an in-glass fingerprint reader in the lower quadrant to unlock the phone. While the side and top bezels are quite slim, the bottom chin is a bit more prominent than the rest of the phone. Shaving a few millimeters off the display size also makes it much easier to wield one-handed especially for users with small hands. 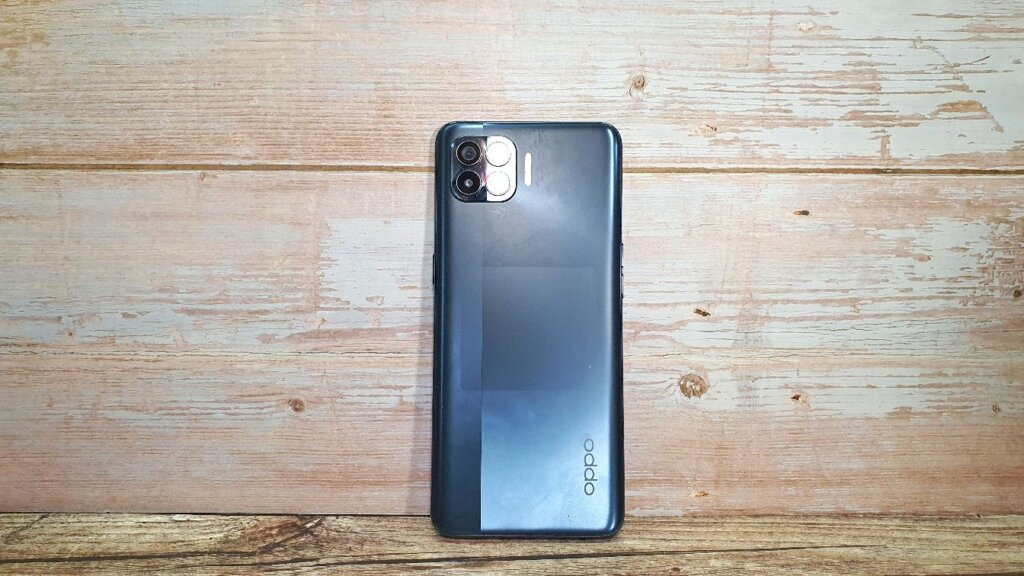 At first blush, the phone looks quite well made but its budget nature is quite apparent when you hold it up with its plasticky finish and buttons. It is fortunately reasonably well built and doesn’t look like it will prang at the slightest mishap.

OPPO A93 Specifications and Performance

Arriving at the same price point of the A92 in its heyday after its price markdown, the OPPO A93 is mostly similar to the A92 save for a few key differences.

In terms of similarities, both phones are limited to 4G LTE which means they aren’t going to hop onto the 5G bandwagon anytime soon. The OPPO A93 also has a slightly smaller display at 6.43-inches versus the A92’s 6.5-inch display though resolution is consistent at Full HD+. The main difference here is that the A92’s display uses a conventional LCD display while the A93 uses a more vibrant Super AMOLED Panel. Both phones also have 8GB RAM and 128GB of onboard storage. 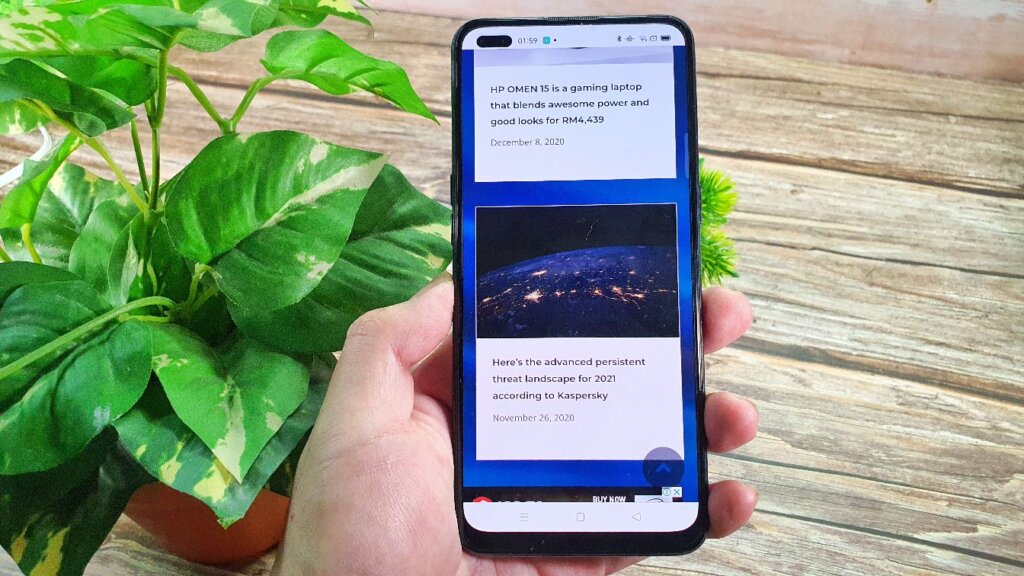 Where both differ is the OPPO A93 runs the MediaTek Helio P95 octacore processor while the A92 runs on a slightly more efficient Snapdragon 665 SoC. The SD665 is built on an 11nm process while the Helio P95 is built on a 12nm process. On paper, the SD665 is supposed to be slightly more efficient which extends to better battery life in theory but both are otherwise running in the same weight class.

Other differences include the A93 running on a smaller 4,000mAh battery though it’s also 30g or so lighter. The rear camera array on the OPPO A93 has a similar quad camera setup to the A92 with a 48MP F/1.7 primary camera, an 8MP ultra wide angle camera,  one 2MP depth sensor and a 2MP mono sensor. The front selfie camera is where the A93 has a distinctive advantage as it adds in a secondary depth sensor for better bokeh paired with the main 16MP camera.

Ultimately, you get a slightly smaller display, a smaller battery and an upgraded front selfie camera in the OPPO A93 compared to the A92.

When subjected to benchmarks, the OPPO A93 yielded the following:

The results are a notch or two above the SD665 in the OPPO A92 which gives this a bit more pixel crunching performance.

Under the hood, the phone runs Android 10 overlaid with their ColorOS 7.2 user interface. They’ve managed to tackle a good chunk of the bloatware and they’ve ditched a lot of their own proprietary applications in favour of a cleaner simpler Google centric array of apps. That’s not to say they haven’t left their mark on the phone and it still retains their “Soloop” video editor that helps you create videos for social media automatically.

They’ve also retained the Theme Store on the OPPO A93 and like its predecessors and other OPPO phones, you’re able to go in and tweak the home screen, lockscreen and background to taste from a selection of precreated free options or chunk out some cash for better looking themes.

Getting about is a smooth affair without any discernible lag with the Helio P95 able to tackle tabbing between multiple browser tabs, run Netflix and YouTube smoothly and tackle Call of Duty Mobile,Asphalt 9 and PUBG on high settings without cooking off or keeling over though Genshin Impact does slow down somewhat during gameplay

More ardent gamers may want to take note that the OPPO A93’s Super AMOLED display is capped at 60Hz though it does offer the customary vibrant visuals that AMOLED is known for with good sharpness and detail; AMOLED panels aren’t very common at this price range and OPPO including them in the A93 is a pleasant bonus indeed.

The sole mono speaker at the base of the phone is reasonably loud but not very detailed; it’s not much to write home about but does the job.

Battery life is rather good belying its battery size. In PCMark 10’s Battery Life test, it managed to get 15 hours of usage though in actual practice we managed to get about a day and a half’s worth with the provided charger getting it from zero to full in under two hours. If you’re after a lighter, more compact phone with slightly better performance, the A93 edges out over the A92.

The rear of the OPPO A93 is equipped with a quad camera array which consists of a primary 48MP F/1.7 camera, a secondary 8MP ultra wide angle camera, a 2MP depth sensor and a 2MP mono camera. 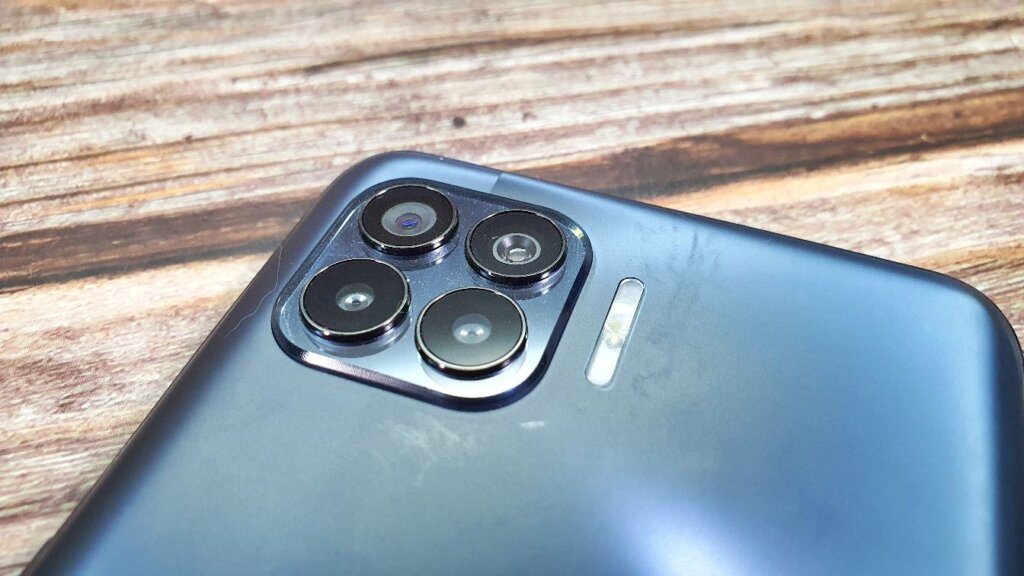 There’s no optical image stabilisation on the camera array though the primary camera does have PDAF with the phone, in keeping with many other OPPO phones in this price range relying on electronic image stabilisation and the larger 48MP sensor to crop a stabilised video feed.

Most of the grunt work is taken care of by the primary camera sensor with the ultra wide angle coming into play only on demand and the remaining two 2MP snappers acting to enhance detail and depth capture data. This camera array is able to take pixel-binned 12MP stills and up to 4K@30fps video. 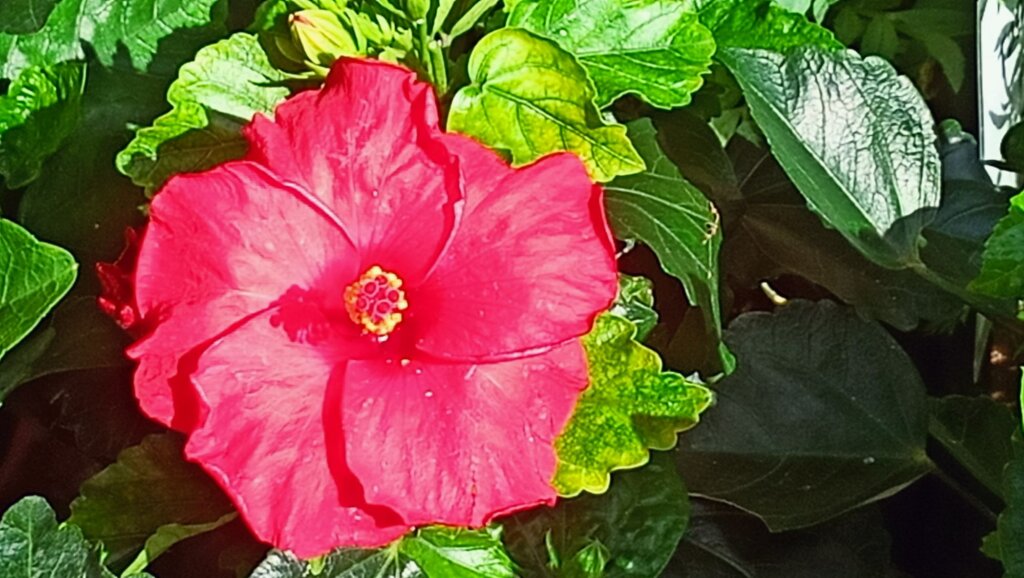 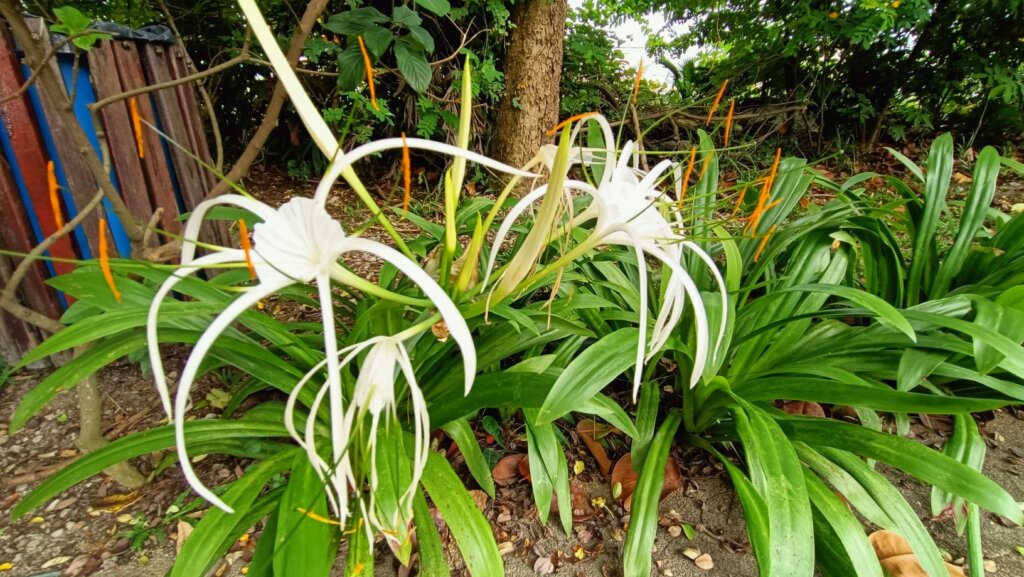 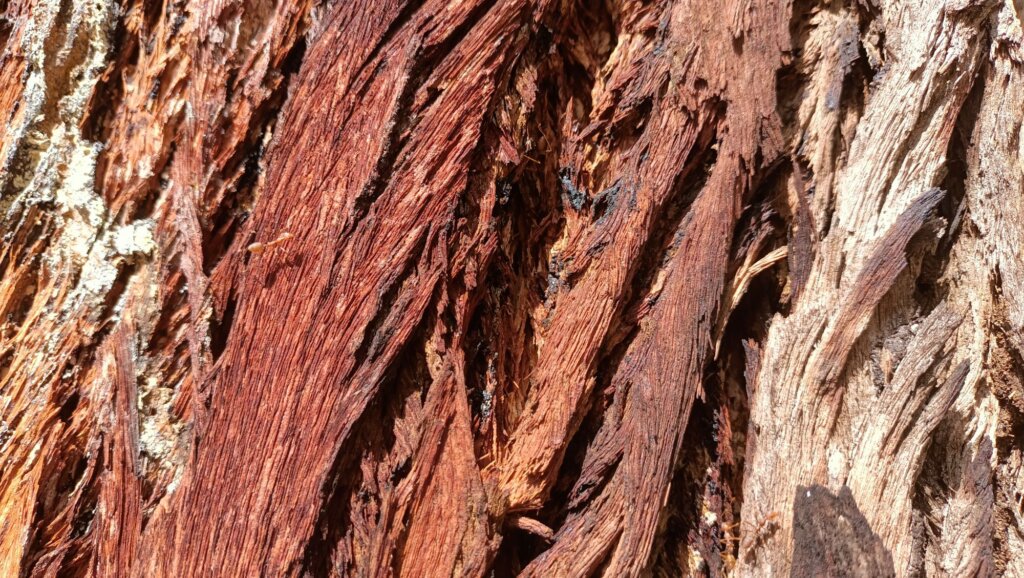 Added to this are a number of modes including a night mode, the obligatory pro mode and a slew of the usual filters. 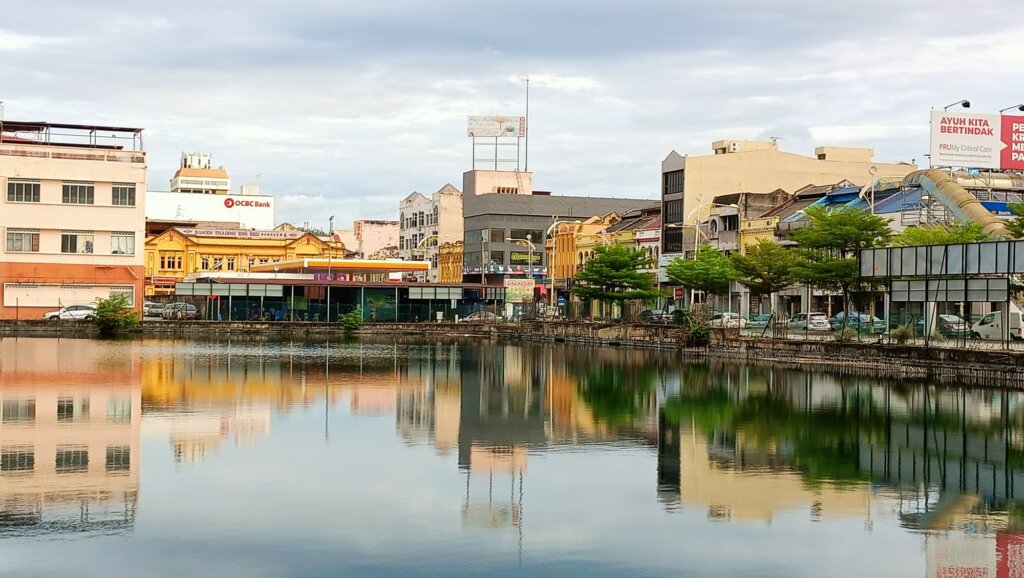 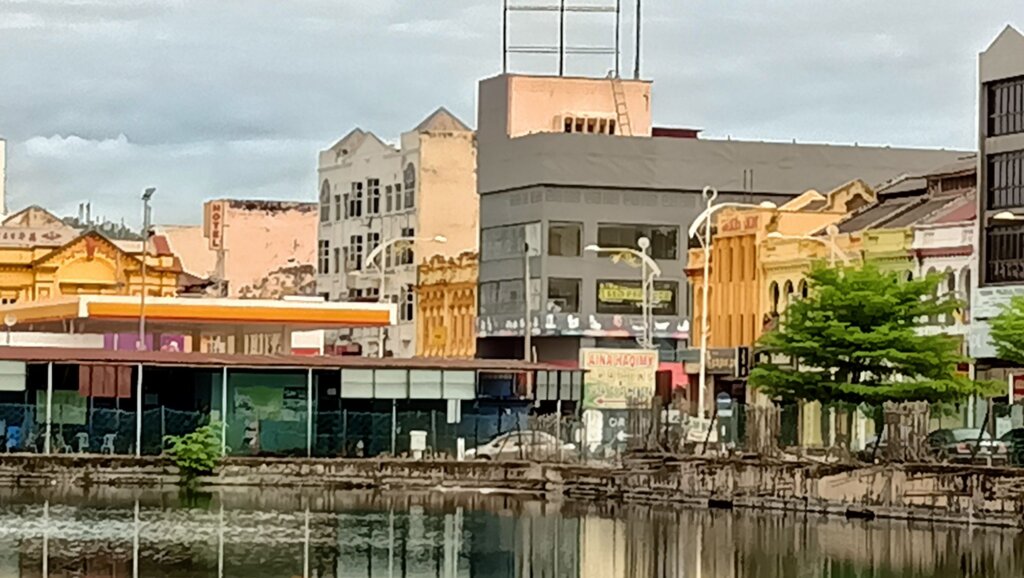 Image quality is comparable to the OPPO A92 with your best results on both the front and rear cameras achieved under daylight conditions. There aren’t many significant differences in performance here and like the A92’s quad camera array, the primary 48MP camera does most of the heavy lifting while the ultra wide angle camera is there only for its intended task . Shots on the ultra wide are a bit softer and lose some detail compared to the main camera; no surprise seeing the size of the sensor. 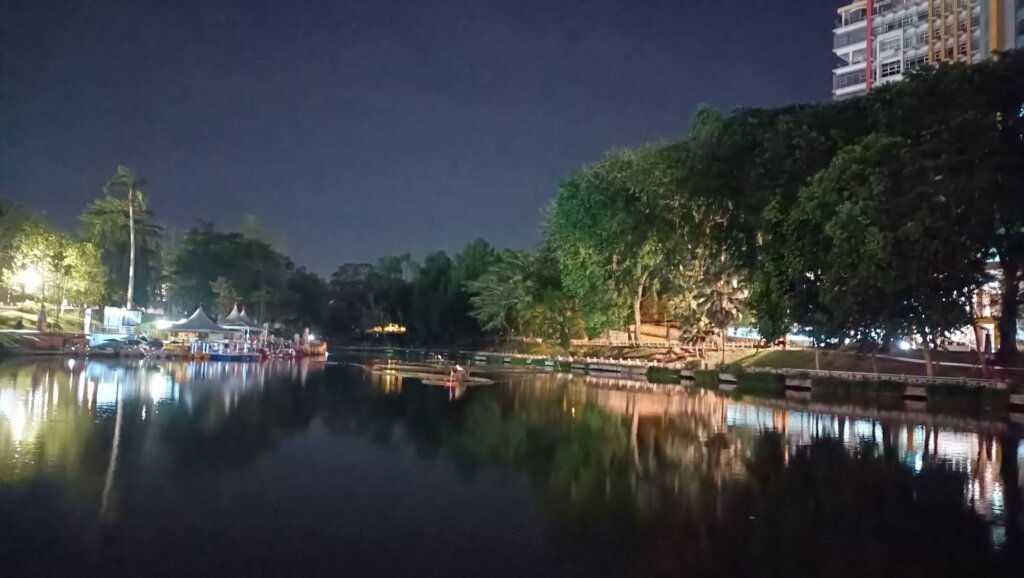 Shot at night with Night mode off 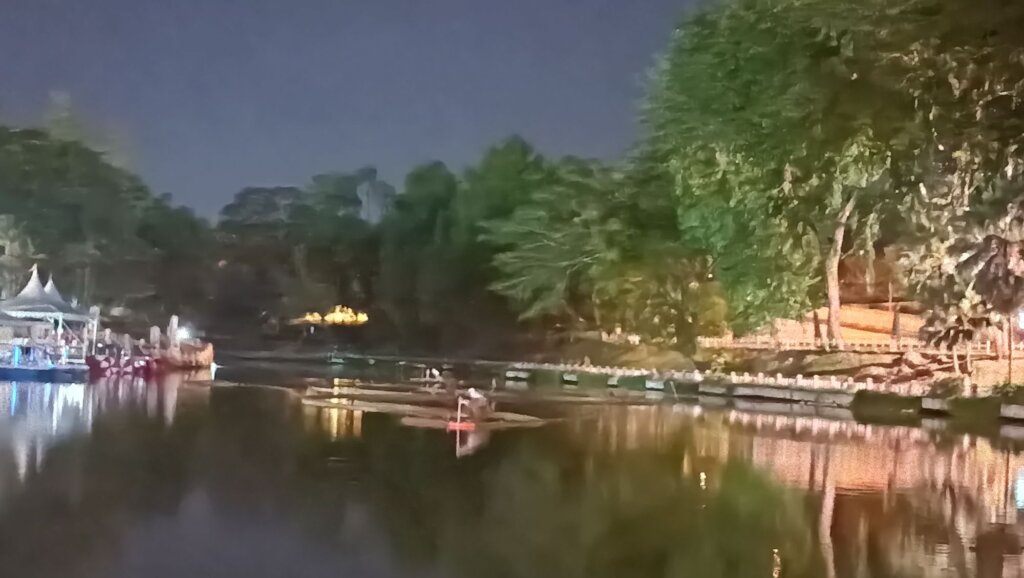 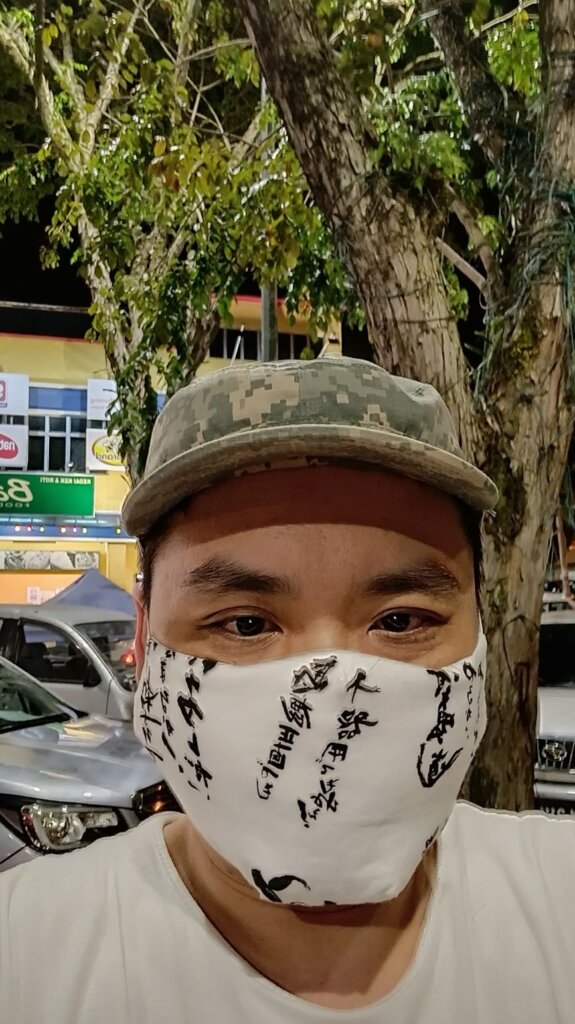 The rear camera is also able to take zoomed shots but it doesn’t rely on any optical zoom and instead crop the main sensor. Like the A92, zoomed in shots are viewable at up to 2 zoom but beyond that, it’s rather noisy. Much like the rear, the selfie camera up front does its best work in daylight but still yields viewable shots after dark albeit with some level of softness. 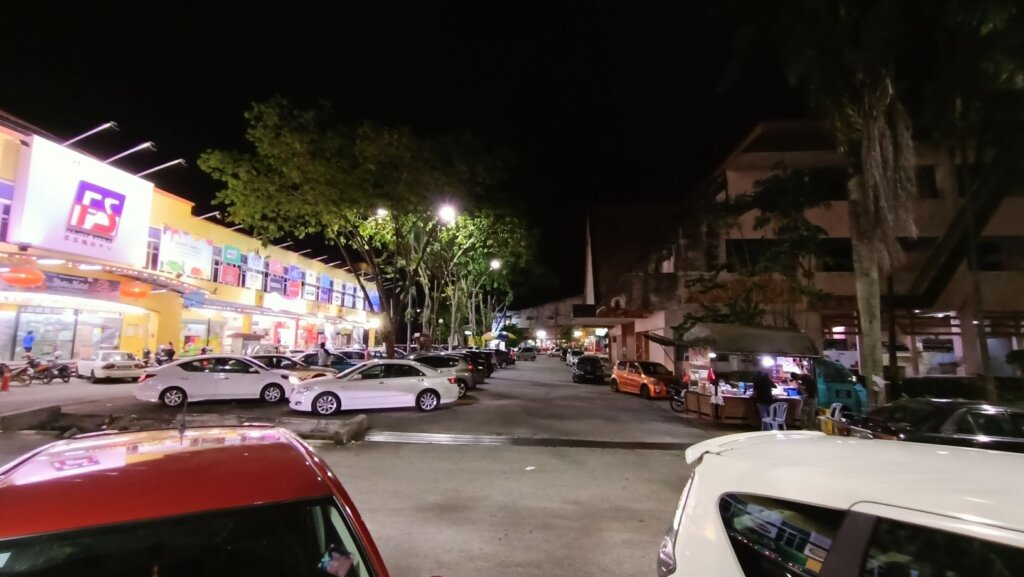 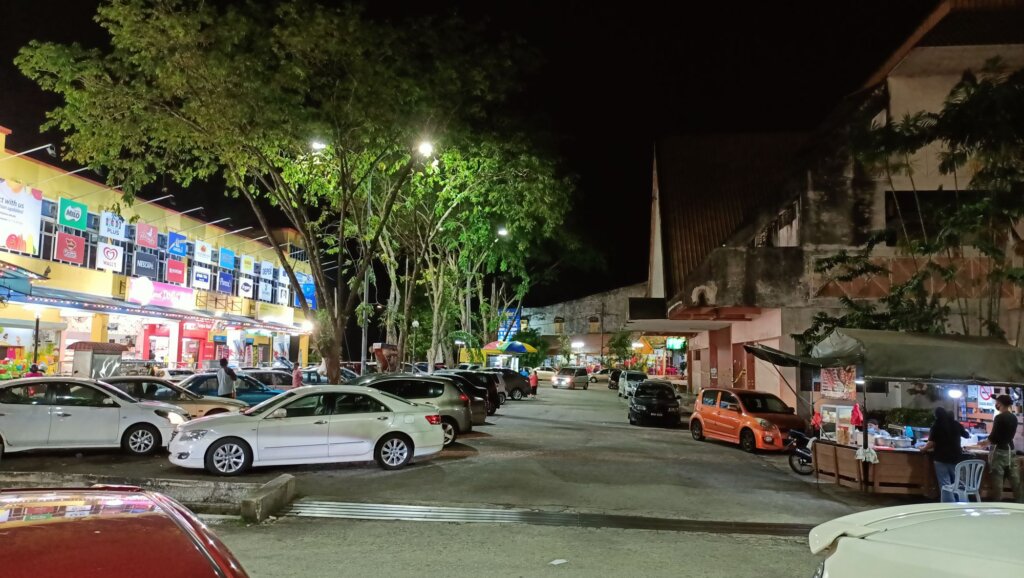 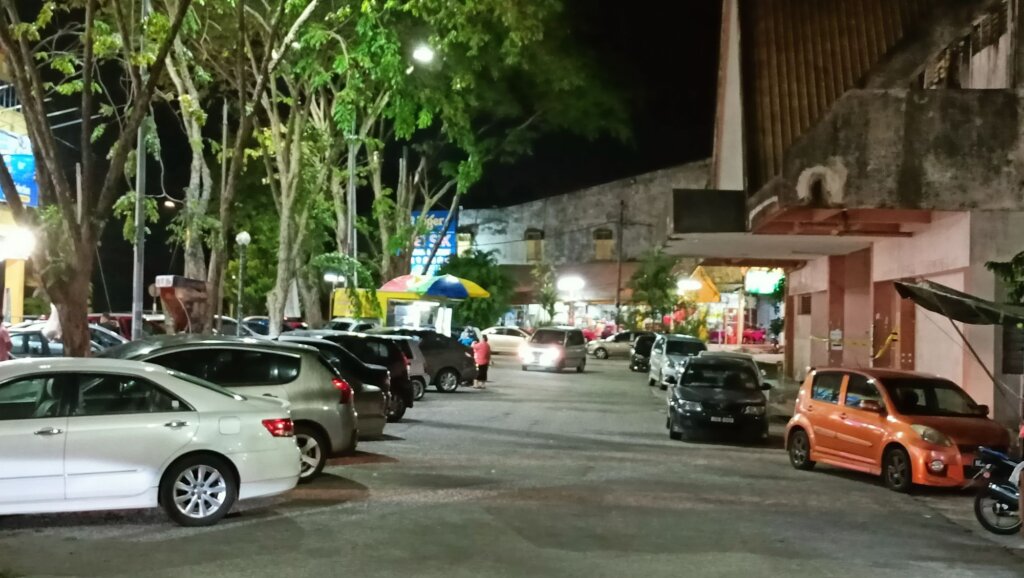 With its recent reprice in Malaysia down to RM1,199, the OPPO A93 proves to be a fairly easy recommendation. If you’re looking for a reasonably compact phone with a Super AMOLED display, decent battery life and fair performance, the OPPO A93 is a fairly well balanced proposition for what you pay for.

What we didn’t Plasticky build, VOOC flash charge would have been appreciated, only has a mono speaker

We say Like its other A-series siblings, the OPPO A93 is a fairly well balanced and affordable midrange phone with a vibrant Super AMOLED display and good battery life with a fair balance of performance. Its recent reprice down to RM1,199 makes it a choice worthy of consideration for those on a budget. 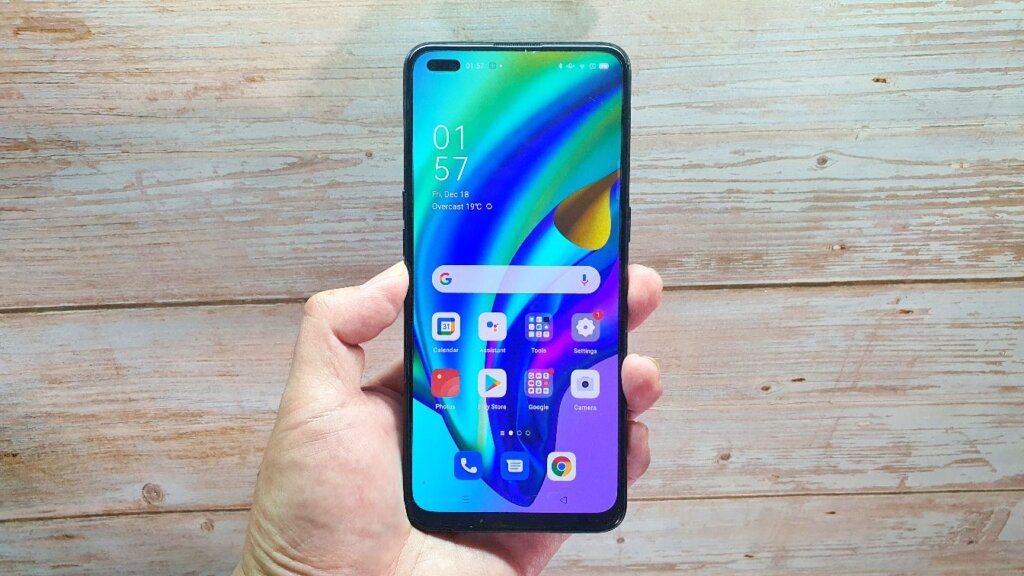 The OPPO A93 is a fairly well balanced and affordable midrange phone with a vibrant Super AMOLED display and good battery life with a fair balance of performance and features. Its recent reprice down to RM1,199 makes it a choice worthy of consideration for those on a budget.

-VOOC flash charge would have been appreciated

-Only has a mono speaker

Posted in Reviews and tagged OPPO A93, Review, Reviews, smartphone