The OPPO A92 is their latest addition to their A-series midrange stable of phones that aims to double down on delivering as much bang for the buck as possible without paying an arm and a leg. In that regard, the A92 succeeds by a modest margin as a workhorse while offering several unique features in the bargain.

While the nomenclature of the OPPO A92’s naming scheme is obscure to say the least, the fact remains that it’s a somewhat different beast from the A91 that we reviewed a few weeks ago. 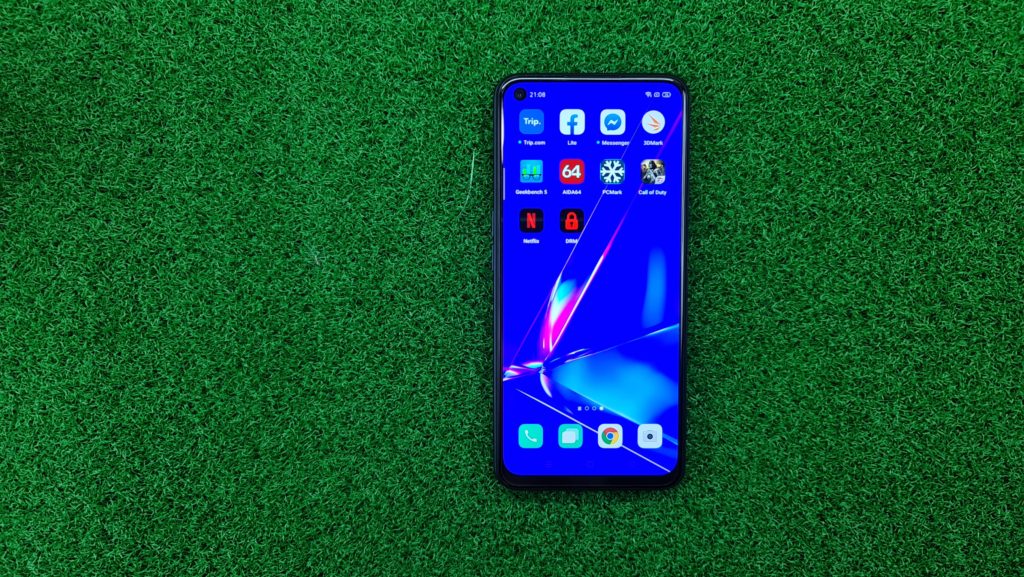 The A92 has a different, slightly neater punch hole arrangement in the display and the usage of LCD versus an AMOLED display, a larger battery without VOOC 3.0 fast charging but with a more conventional 18W fast charging arrangement, a different quad camera layout, a side-mounted fingerprint reader and, of particular note, the inclusion of something rare in midrange phones – stereo speakers. That and a slightly higher price tag at RM1,199. In terms of features and hardware, the A92 is more akin to the A72 announced in April for certain markets.

While most circa RM1,200 smartphones only come with a single mono speaker at the base of the phone, the OPPO A92 packs an additional speaker at the top near the earpiece section so you get stereo sound which makes it a darned lot better for content consumption.

The OPPO A92 comes with quite a comprehensive selection of kit. On top of the phone itself, you get a soft TPU casing, an 18W fast charger and USB Type C cable as well as a hard pair of earbuds that end in a 3.5mm audio jack.

Another value added bonus is that OPPO has also pre-applied a screen protector onto the A92’s display that ensures that the display is well protected even out of the box. 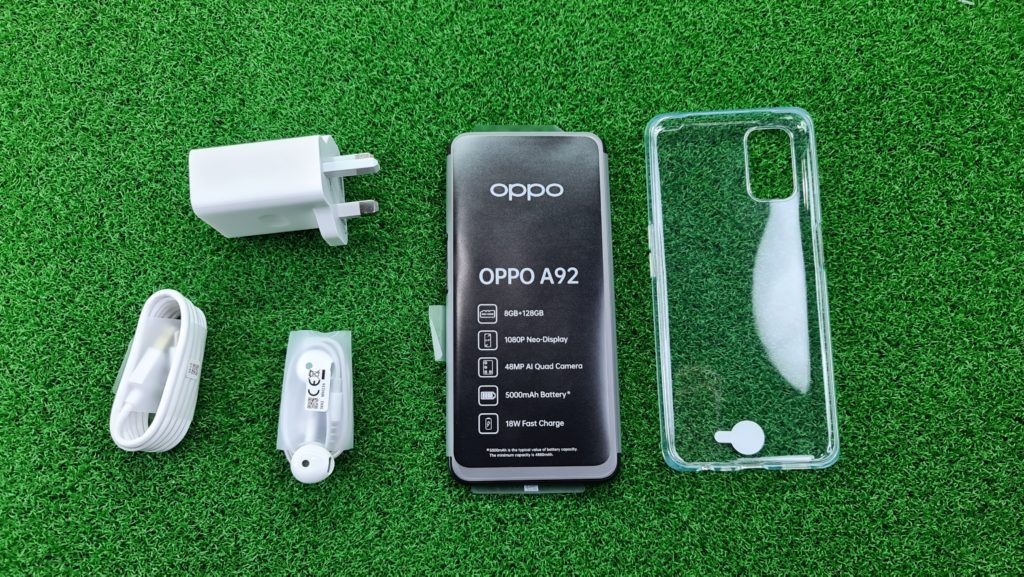 Like other OPPO A-series midrange phones, this comprehensive selection of kit bundled with the A92 means that you can start deploying it immediately rather than having to rummage about on shopping websites to buy a casing, a screen protector and other accessories.

OPPO A92 Review – Design and Specifications

Under the hood, the OPPO A92 comes with the following specifications:

This hardware setup puts the A92 squarely as a mid-range phone, especially with the Qualcomm Snapdragon 665 processor that was announced in April last year and which was built on an 11nm process. The 8GB of RAM keeps it snappy for most tasks and the 128GB of expandable storage is plenty especially for casual users. Combined with its stereo speaker setup, this lends it appeal as a content consumption platform on the go.

The OPPO A92 doesn’t break new ground with a relatively conservative form factor that has been refined with a couple of subtle enhancements for better ergonomics. 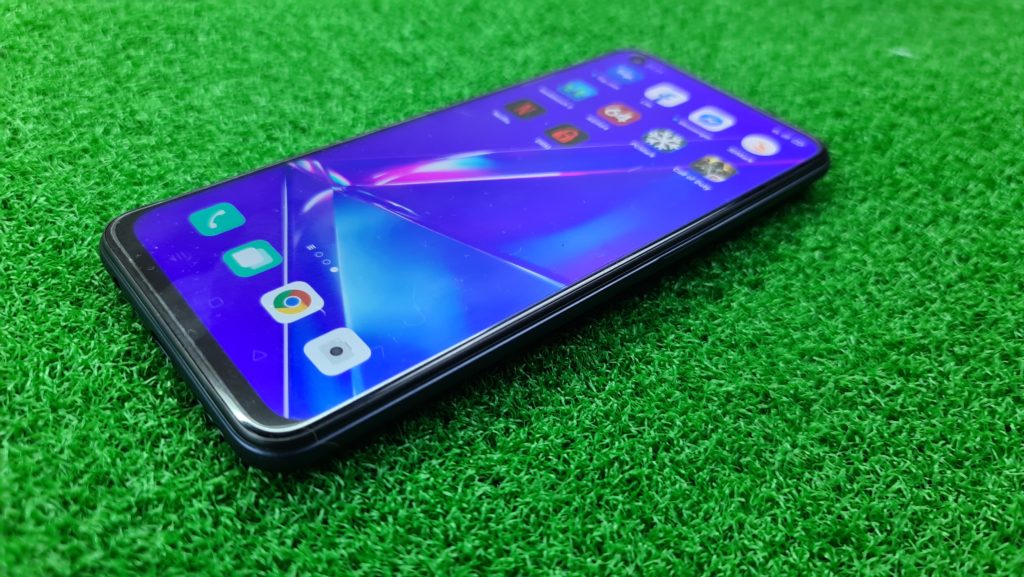 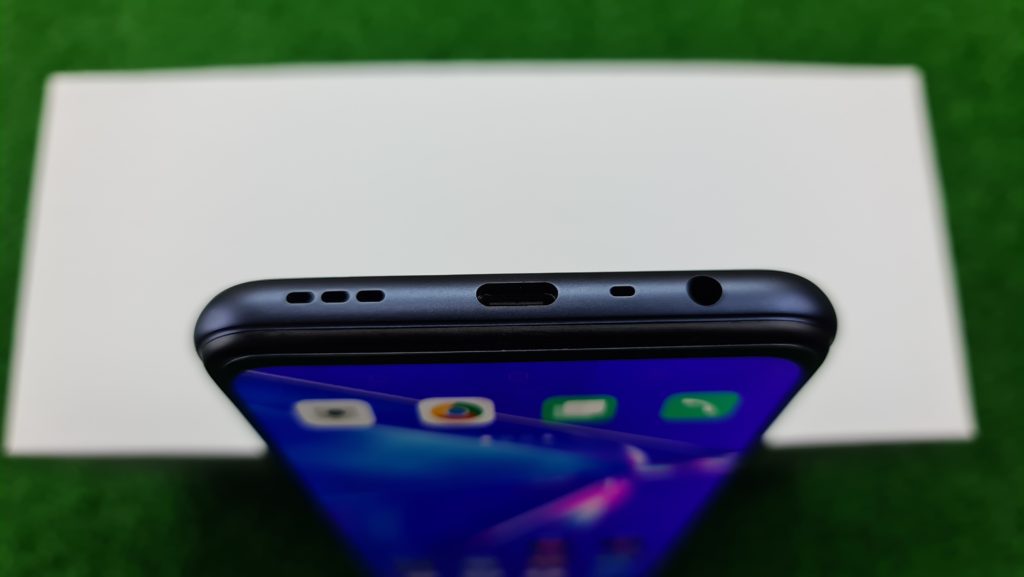 The backplate of our test unit, which comes in Twilight Black has interesting mirrored striations that radiate out from the camera array in the fashion of a streaking star. It only appears if you angle it correctly under the light but does lend it a unique aesthetic touch. 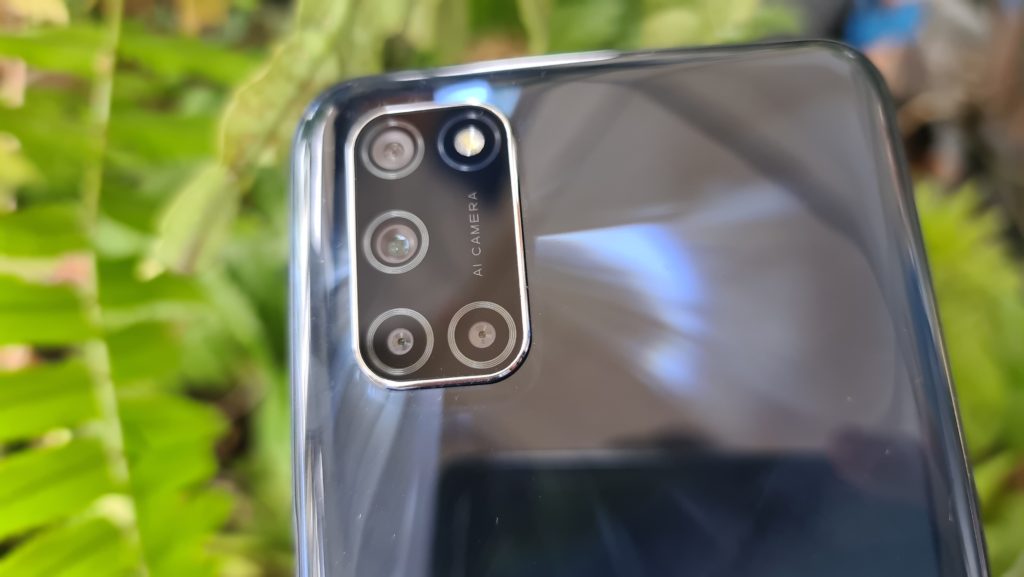 The reflective finish does however make it prone to fingerprint smudges. Another pickle with the design is that the rear camera array juts out quite a bit which makes it prone to scratches especially if you leave it face up on a table. Fortunately, the provision of the bundled casing helps to resolve both problems nicely.

Up front, the OPPO A92 has the aforementioned 6.5-inch IPS LCD FHD+ (1080 x 2,400 pixels) resolution display that has slim 1.73mm bezels all around, a dense 405 PPI pixel density and a maximum brightness of 480 nits. The display has also been certified by TuV Rheinland such that its secondary Eye Care mode is capable of filtering out blue light from the visible spectrum to protect your peepers during extended use. The relocation of the selfie camera notch to the upper left corner makes the camera more unobtrusive which is a welcome move indeed. 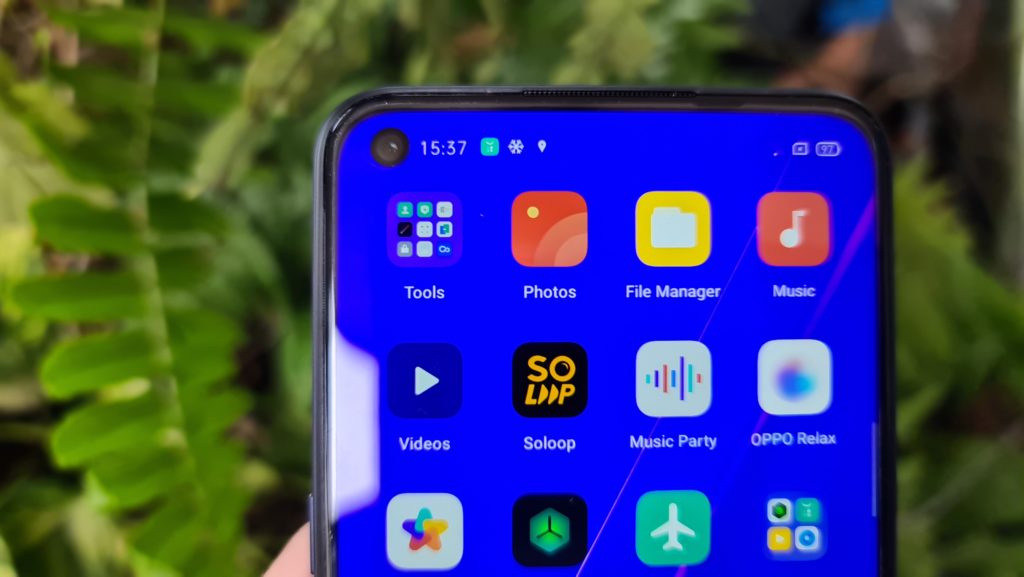 When wielded, the OPPO A92 was fast on the draw and was relatively easy to use one handed. The smooth corners ensured easy removal from a pants pocket and the side-mounted fingerprint reader made it a lot easier to access and unlock. The heft and build quality are relatively solid, more so for its circa RM1,200 or so asking price.

OPPO A92 performance and user experience

The OPPO A92 runs full fat Android 10 with full access to Google’s apps and services overlaid with their ColorOS user interface with all its perks and quirks. On the bright side, ColorOS’s customisability and its well stocked theme store enables users to tweak the menu aesthetics to taste though the better looking themes need you to chunk out cold hard cash to get them.

Unfortunately, ColorOS’s tendency to cram in a ton of bloatware is prevalent here to a copious degree. On a fresh install alone, you’re getting an Agoda app, a Lazada app, a bizarre Webnovel app for reading online books and comics, their own browser as well as their own App Market for side loading apps all taking up space on the phone.

Much like our previous reviews for their other devices like the A91 and the Find X2 Pro, their App Market has quite a bit of overlap with the Google Play store and has an eclectic mix of apps with varying degrees of quality.

Firing up and getting the OPPO A92 up and running from out of the box was relatively straightforward. After a few prompts, it tries to push you to install a selection of apps from their own App Market while others are already pre-installed on the A92. You’ll likely spend the first few minutes doing a bit of digital housekeeping on your A92 before using it for the first time.

When subjected to synthetic  benchmarks, the phone yielded the following scores:

The Snapdragon 665 processor seems to lag just slightly behind the Mediatek Helio P70 on the A91 though synthetic benchmarks don’t always tell the whole story. Under practical usage in the field, the Oppo A92 ran in a pleasantly smooth fashion. Multiple browser tabs were opened without significant lag and the phone was comfortably able to swap between multiple apps on account of its generous 8GB RAM.

The OPPO A92 ran the essentials, including the latest crop of games that comprise of Call of Duty Mobile, PUBG and Asphalt 9 on high settings without any significant frame drops and relatively smooth gameplay though there was still a delay of a few seconds when starting these apps up.

Where the OPPO A92 shows its chops is when it is employed to enjoy movies and other content. Compared to the A91, the A92 has a slightly larger screen and stereo speakers which gives it an added edge. Oddly enough, a DRM check on the phone shows that it has Widevine L1 support though in the Netflix app itself the phone is only certified for Widevine L3, meaning it’s relegated to streaming SD content.

The A92’s stereo speakers proved to be a welcome addition with a decent front-facing wall of sound for general listening. They’re loud enough to be able to share your taste in music in the LRT on a busy day without distortion even when dialled to maximum but they’re not the most detailed on test. Still, they’re more than sufficient for listening to mainstream music and finishing a season of Breaking Bad on Netflix. They’re a very welcome addition as stereo speakers are a rarity in this price range. 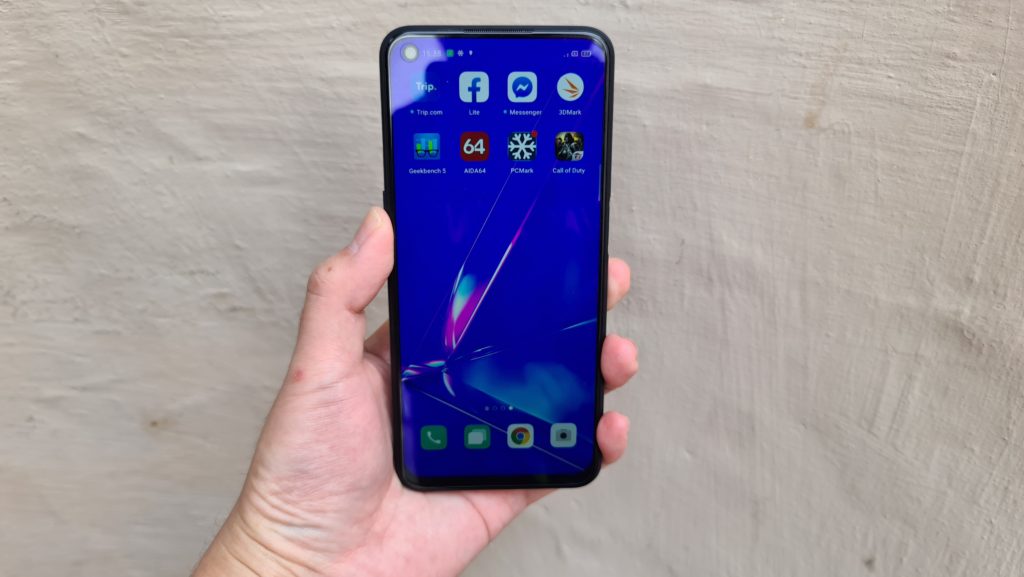 In terms of battery life, the OPPO A92’s 5,000mAh battery and efficient Snapdragon 665 processor eked out pretty decent endurance with a good day and a half of battery life, with modest use of data, WiFi, three or four hours of gaming, constant use of social media and several hours of Netflix. The bundled 18W charger was able to fully juice the phone in under a couple of hours from dead zero.

On the performance front, the OPPO A92 isn’t going to break any track records but it’s a sound blend of capabilities that tackle all the usual scenarios a smartphone would encounter, more so for the price you pay for at RM1,199.

The OPPO A92 has a rear quad camera array with a primary 48-MP F/1.7 AI-enhanced camera, a secondary 8-MP 119-degree ultra wide angle camera, a 2-MP mono sensor and a 2-MP portrait sensor. Only the primary 48-MP and secondary 8-MP wide angle cameras are used to capture photos with the third and fourth cameras primarily employed to enhance detail and capture depth data.

In terms of capabilities, the primary 48-MP camera captures pixel binned 12-MP shots, has up to 5x digital zoom by cropping the image from the main sensor and can capture 4K@30fps video.

Auto mode in dim light with the primary camera

In keeping with other OPPO phones of this current generation, the A92 has a night mode that uses a longer exposure time to capture better night shots. There’s also a Pro mode too with finer control over ISO, shutter speed, white balance and exposure on top of the usual slew of beautification modes. 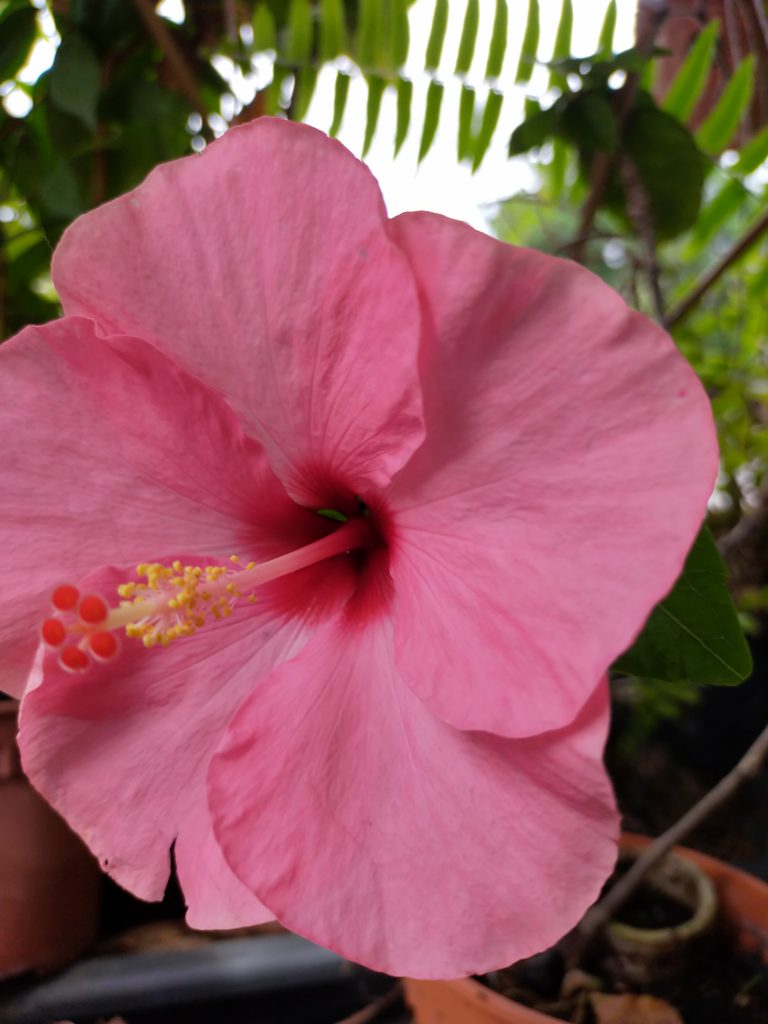 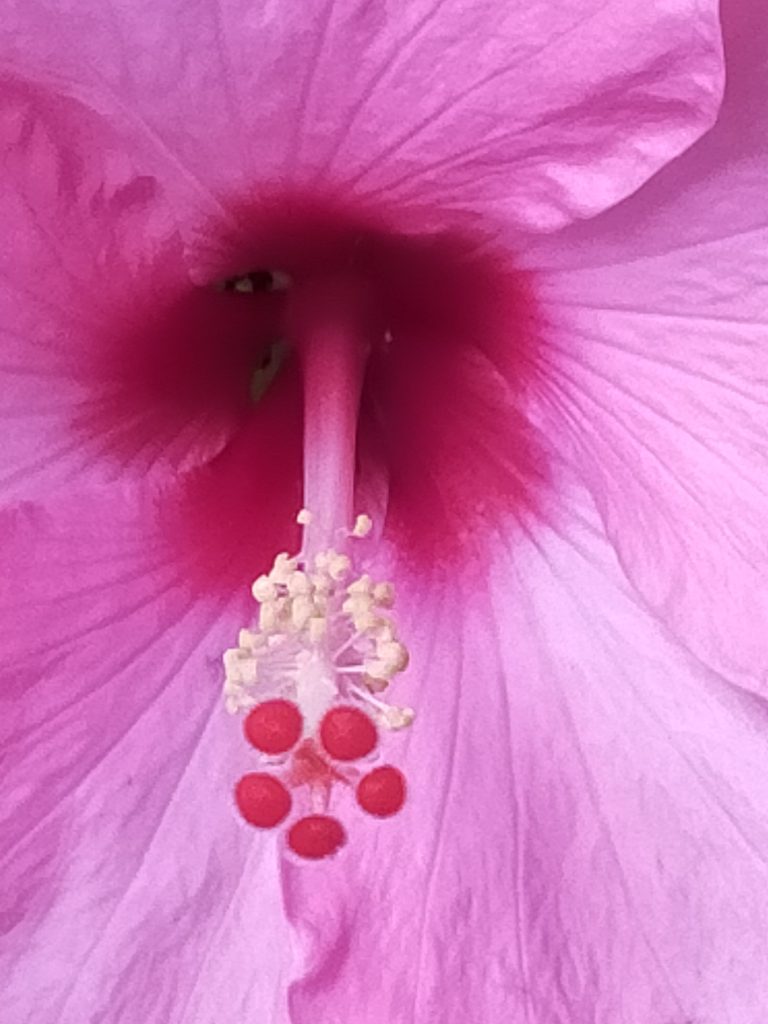 The front facing selfie camera consists of a single 16-MP camera with an F/2.0 aperture capable of capturing up to 1080P video.

The setup is somewhat akin to the A91 with mostly similar results and quirks though they did fix the bizarre way of accessing the wide angle camera by placing it back on the zoom slider on the right in keeping with mainstream camera UI design. By and large, the A92’s camera setup is heavily reliant on the main 48-MP camera for most of the grunt work with the wide-angle camera there for wide angle shots..

Shots under daylight with the wide angle camera and the primary camera deliver their best results under daylight conditions with good dynamic range, a decent amount of detail and fairly accurate colour rendition though greens seem a bit vibrant this time around. Zoomed shots rely on cropped images from the primary 48-MP sensor and are predictably soft at 5x zoom with grain though at 2x zoom it’s still grudgingly usable; zoomed-in night shots aren’t as good though with middling, noisy results.

The ultra wide angle camera veers towards less vibrant colours in captured stills which are apparent in lower light settings but are nevertheless quite pleasing though there’s a discernible difference when compared to results from the main camera.

When using the wide angle camera with Night mode, you’ll get fair results though pixel peeping shows quite a bit of grain and noise. Fortunately they’re more than sufficient for posting on social media to share your latest lockdown escapades. The front facing camera was able to deliver serviceable shots but it wasn’t anything to write home about.

OPPO A92 Price and Verdict


The OPPO A92 is an interesting mid-range proposition that blends a large FHD+ display, the notable inclusion of stereo speakers, serviceable cameras and a large battery in a fashionable casing that makes it ideal for enjoying a variety of content on the go from movies to gaming.

The addition of the side-mounted fingerprint reader is a pleasant bonus too. It costs a wee bit more than the A91 but you get a bigger screen, stereo speakers and more battery life to go with it. If you’re looking for a cheaper alternative  and prize the colour rendition of your display, the OPPO A91 and its Super AMOLED panel is a viable choice at RM999. 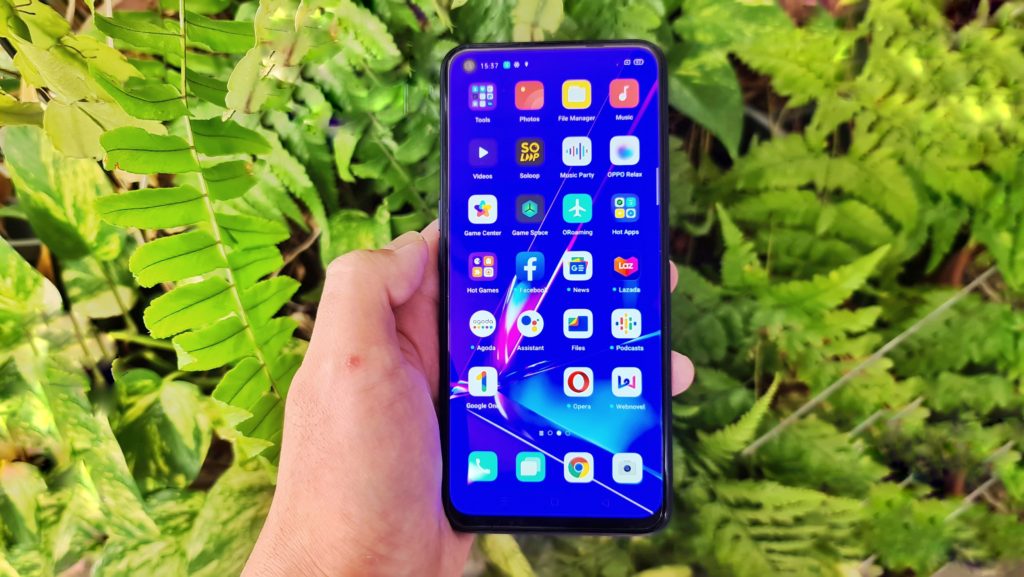 What we liked Stereo speakers, still has 3.5mm audio jack, large battery, decent performance, side-mounted fingerprint reader, lots of accessories
What we didn’t ColorOS has a ton of bloatware, VOOC Flash Charge would have been nice
We say The OPPO A92 is a solid mid-range phone that stands out on account of its stereo speakers, side-mounted fingerprint reader, large battery and otherwise decent overall performance that make it a very capable workhorse and a surprisingly good phone for enjoying media.