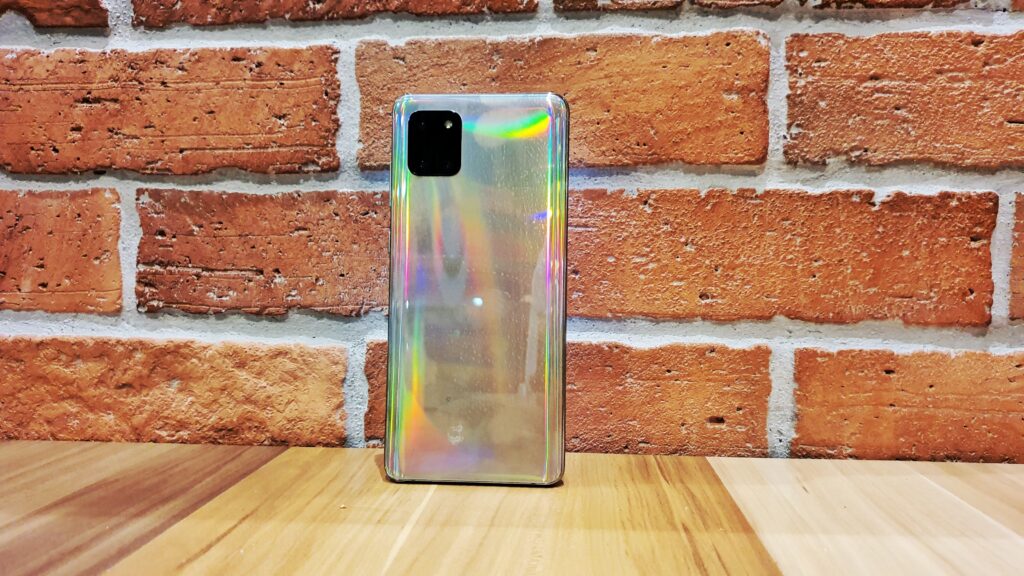 Launched at the same time as the Galaxy S10 Lite in Malaysia, the Galaxy Note10 Lite is a curious mix of new and old tech which is intended to offer much of the Galaxy Note experience with some tradeoffs at a very affordable price point.

Externally, the Galaxy Note10 Lite eschews the glass and metal chassis of its pricier siblings and instead opts for a facsimile that’s been dubbed as glasstic which is effectively polycarbonate but with a shiny reflective coating that mimics the aesthetics of glass. 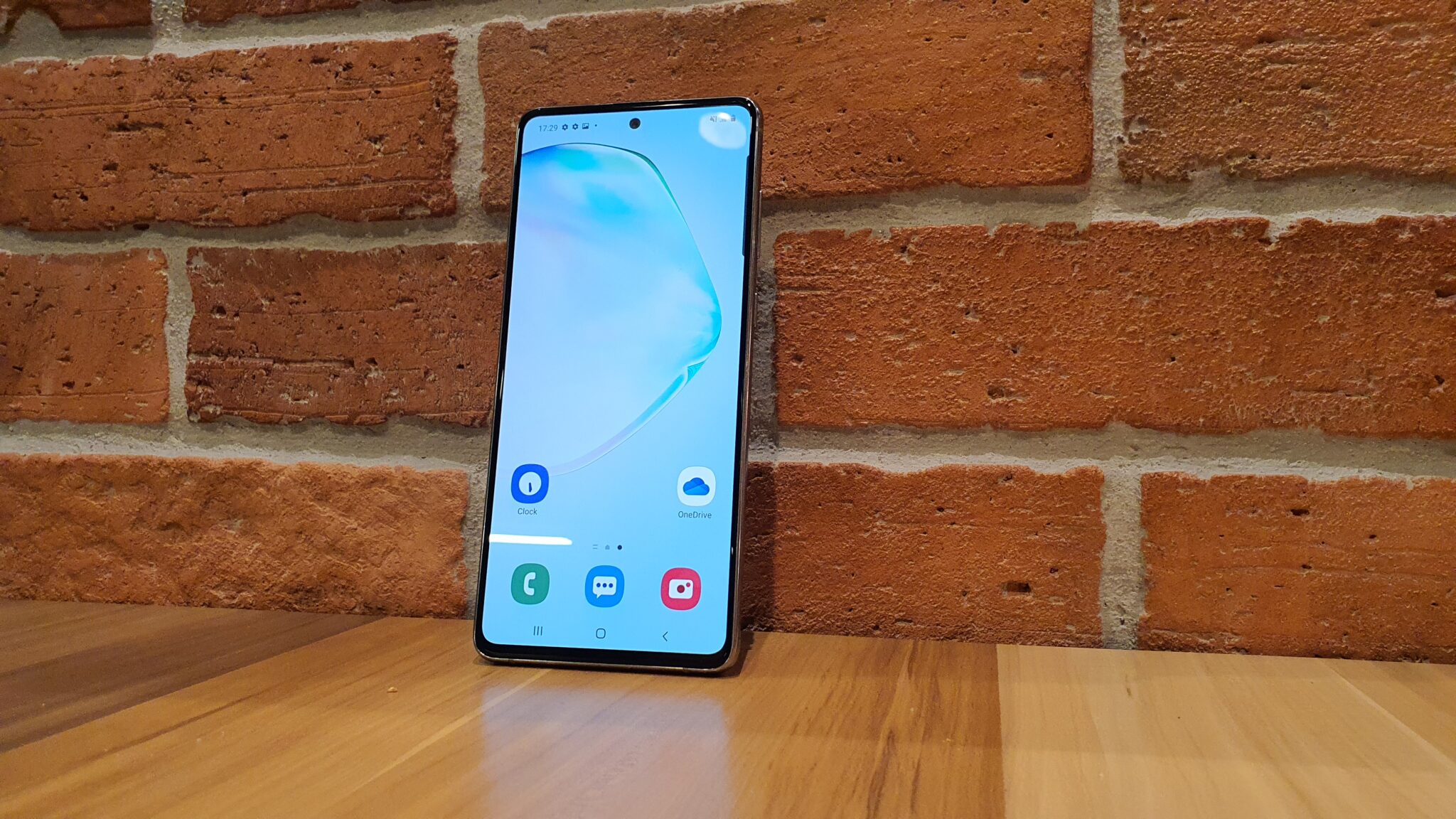 The backplate itself has a design akin to the new Galaxy S20 series with a squarish, blocky triple rear camera array emplaced in the upper left corner of the phone. The left side of the phone is bare save for a hybrid SIM card tray that lets you pop in a SIM card and a microSD card or two SIM cards at the same time.

The base sports a grille for the sole mono speaker on the phone, a USB Type-C port, a 3.5mm audio jack and a well for the bundled S Pen stylus. The right side of the phone sports a power button and volume rocker while the top is otherwise bare. 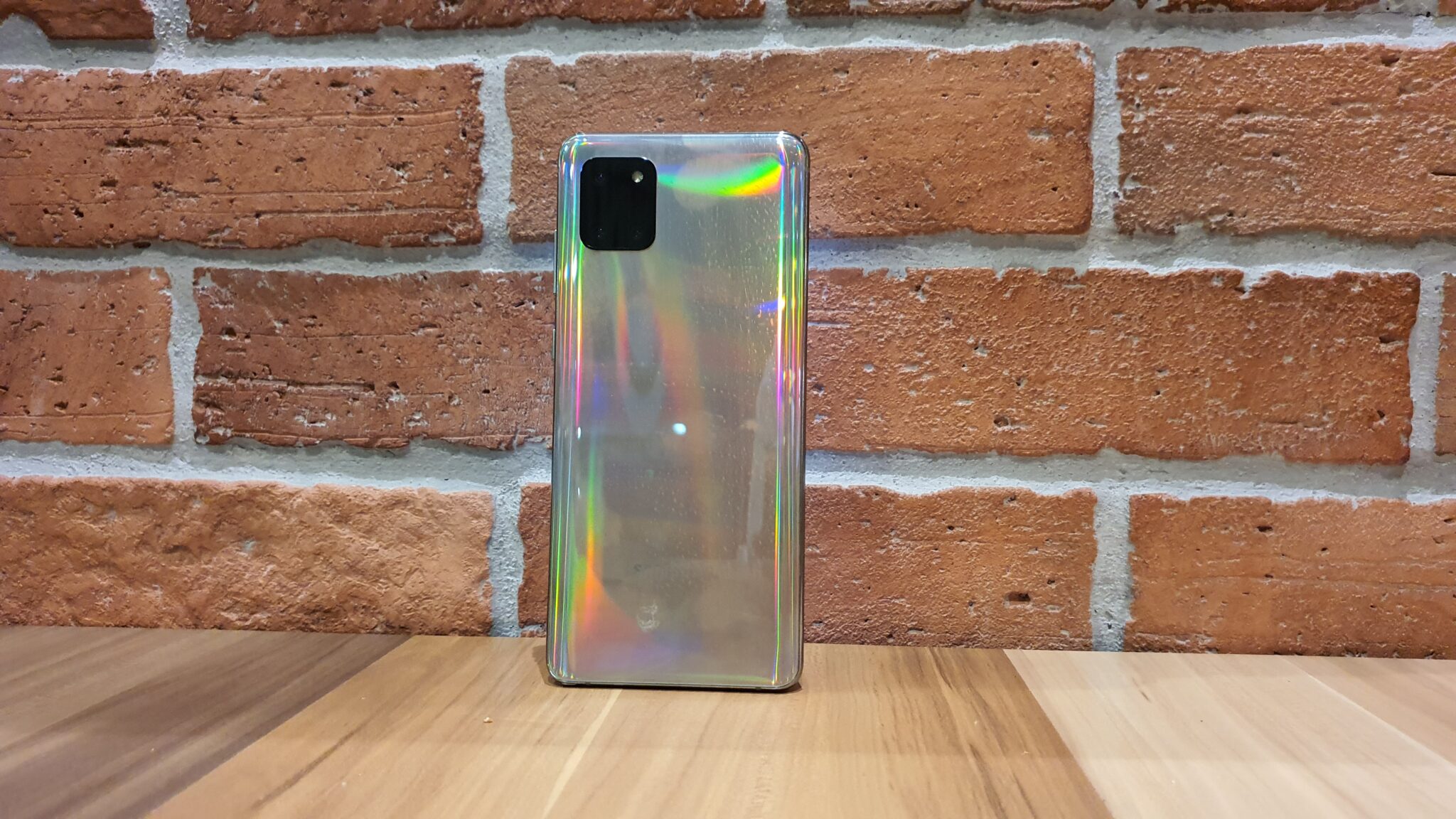 The front of the phone consists almost entirely of display, with slim side bezels and a tiny punchhole in the 6.7-inch Super AMOLED Infinity-O display up top for the selfie camera. Much like its pricier siblings, it also has an under-glass fingerprint scanner to keep the design neat and clean. The Note10 Lite is also one of the few Galaxy Note series phones in recent service since the early Galaxy Note5 that has a completely flat display rather than curved edges. 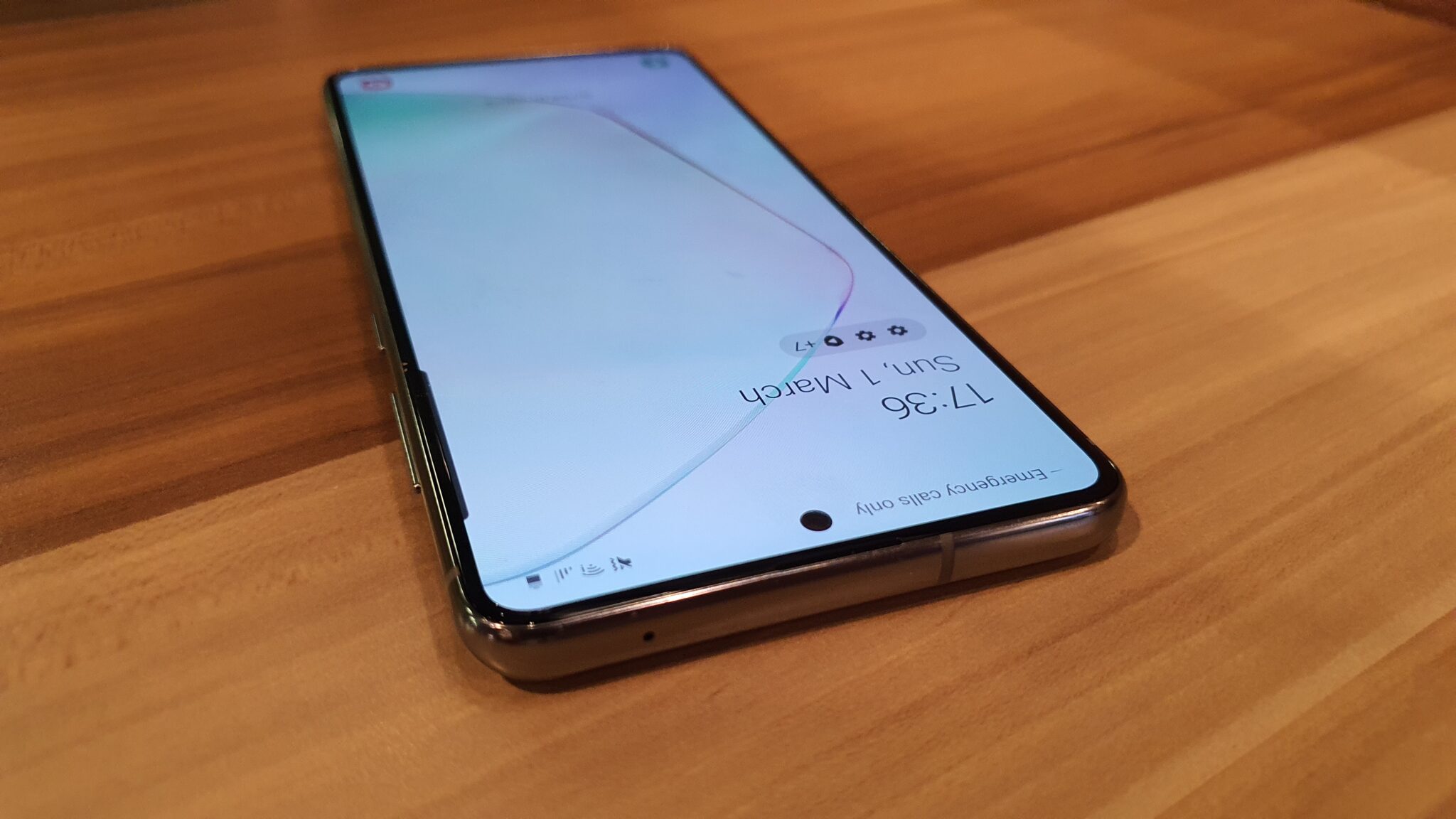 Belying its RM2,299 price tag, the Galaxy Note10 Lite proved to offer a premium heft and build quality akin to its pricier siblings though it is technically meant to be lower on the totem pole than the Galaxy Note10 in pricing, performance and capabilityl under practical conditions it’s pretty darned close to what its pricier kin can do and falls short by just a notch or two. 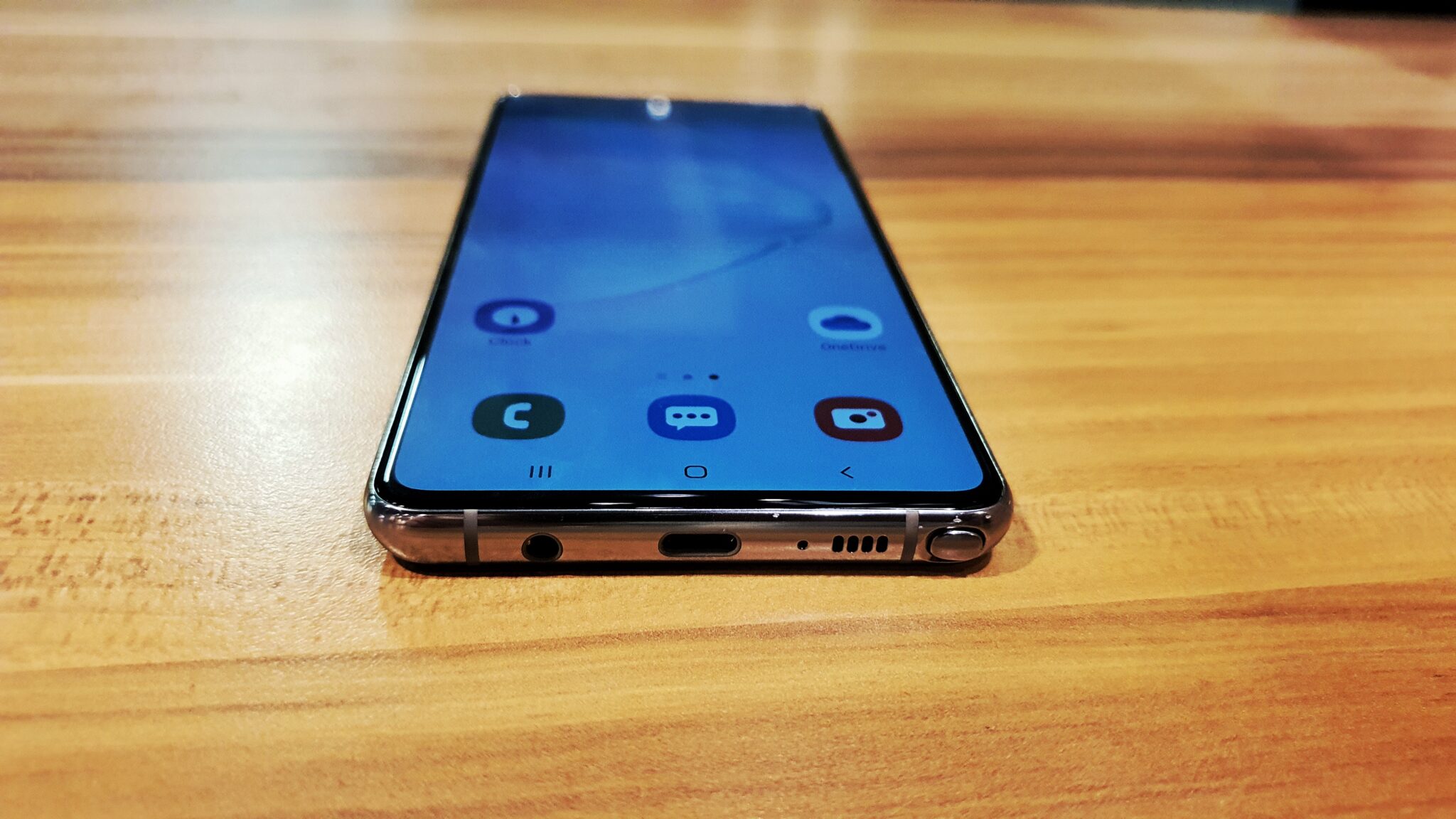 It even manages to go one-better over the pricier Galaxy Note10 as it packs a much larger 4,500mAh battery with 25W fast charging though it lacks wireless charging support. There’s also one thing that it has that the Note10 series lacks – a 3.5mm audio jack which is a pleasant bonus.

Under the hood, the Galaxy Note10 Lite comes with an Exynos 9810 octacore processor, a two-year old SoC that first saw service on the Galaxy Note9 and Galaxy S9 series phones. Paired with this is the latest Android 10 and Samsung’s own One UI 2 that’s also seen on their latest Galaxy S20 series phones. For Galaxy Note10 Lite units in Malaysia, we’re getting 8GB RAM and 128GB of storage expandable via the hybrid SIM card. 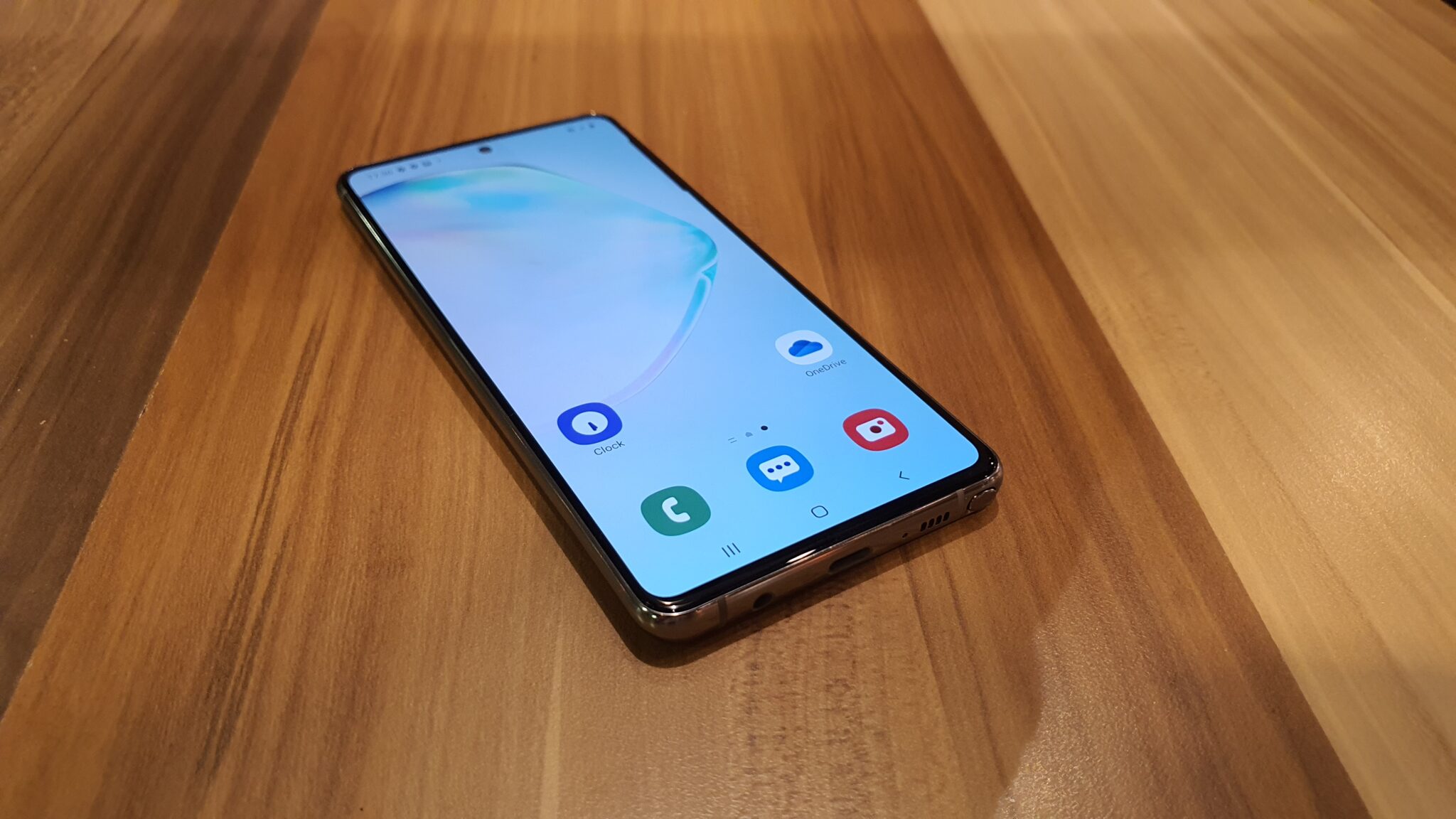 The Exynos 9810 octacore processor was built on a 10nm process whereas the more powerful Galaxy Note10 and Note10+ run on the Exynos 9825 processor. While the Exynos 9810 was cutting edge in its day, it’s pretty long in the tooth and not as energy efficient along with being slightly less powerful than the current day Exynos 990; this will impact on battery life but the provision of the large 4,500mAh battery makes up for it.

Under practical field conditions, the Note10 Lite did not disappoint and proved swift enough to be the match of most competing flagships. Games like the latest Call of Duty Mobile were tackled on the highest settings without any discernible lag. The phone managed heavy duty browsing with over a dozen open Windows in Chrome and a host of other tasks with swift load times throughout the experience.

The provided Super AMOLED display maxes out at Full HD+ resolution much like the Note10 and served up wonderfully vibrant hues onscreen and pin-sharp text. Even compared to the 4K displays on the Note10+, there isn’t much difference unless you pore over every pixel. Its FHD+ resolution also works in its favour here as it also means that there’s less pixels to push and which in turn extends battery life. 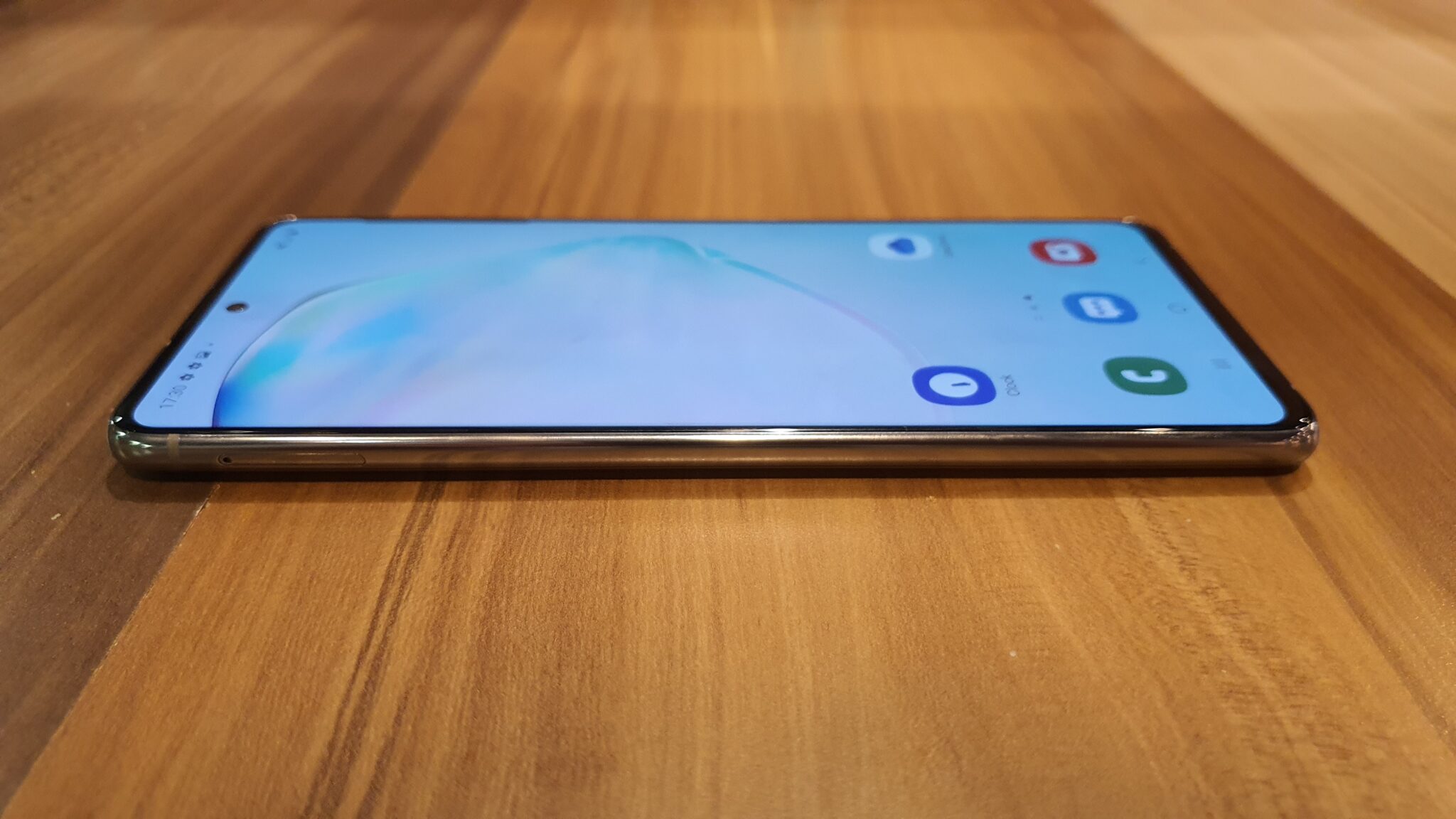 The main quibble here is that the Note10 Lite only has a single mono speaker at the base of the phone, perhaps in an effort to cut corners. The speaker itself is loud, manages to stay audible without distortion at high volumes but has poor sound staging; if you’re watching movies or gaming on this, you’d best resort to using headphones.

Samsung’s upgraded One UI 2 interface offers a bit more clarity on what apps are using what resources in the background and has more options for granting and denying permissions on a per app basis.

The interface has most of the Note10 series tweaks, including their Air Command feature to let take notes with the SPen and Edge shortcuts that let you gain quick access to preselected apps. The biggest thing that this version of One UI 2 lacks though is the omission of DeX mode so you can’t hook it up to a monitor via a HDMI cable to fire a desktop interface nor can you hook it up to a USB port to your PC to mirror what’s display on your phone.

It’s hardly a concern for casual users but it is something important to take note for power users. Fortunately, the phone does retain the use of Samsung Pay so you’ll be able to get your usual payments done with a minimum of fuss.

The provided S Pen stylus on the Note10 Lite is effectively the same as the one used in the Galaxy Note9 with Bluetooth Low Energy (BLE) support, allowing you to use a combination of button presses on the stylus to remotely control aspects of the phone within several meters distance.

You can use it as a remote shutter release allowing you to prop the phone up somewhere and take wefies or other customised tasks like browsing through your own image gallery. Unfortunately, it lacks the accelerometers seen in the Note10 and Note10+, so it lacks wand-like gesture controls on the S Pen. 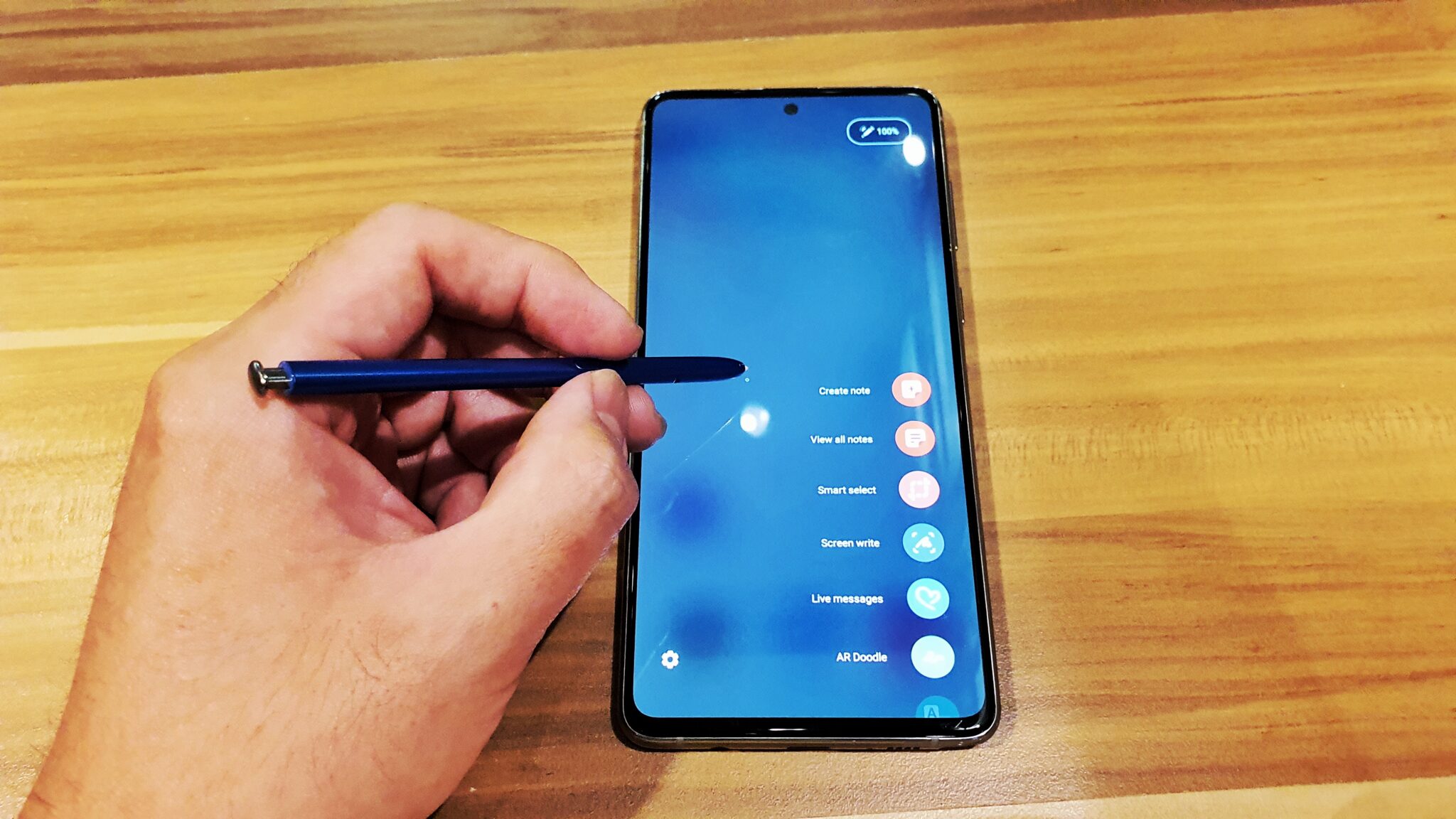 Omission of gesture controls aside, the SPen in the Note10 Lite allows you to sketch, draw and doodle as well as use the full range of Air Command shortcuts to do screen grabs, edit and annotate notes and the like. In keeping with its pricier siblings, the S Pen also has 4,096 levels of pressure sensitivity with the full range of function afforded to other Note series styli.

READ  The new honor 7X is a widescreen stunner for RM1099

The fact that you’re getting this kind of functionality at its price point at just about 2 grand is quite a surprise.

While Samsung’s most affordable Note has a Lite added to the name, it’s no slouch in the camera department. The rear comes with a triple camera array arranged in a squarish housing with an LED flash. All three cameras have a 12-MP sensor but differ in purpose. 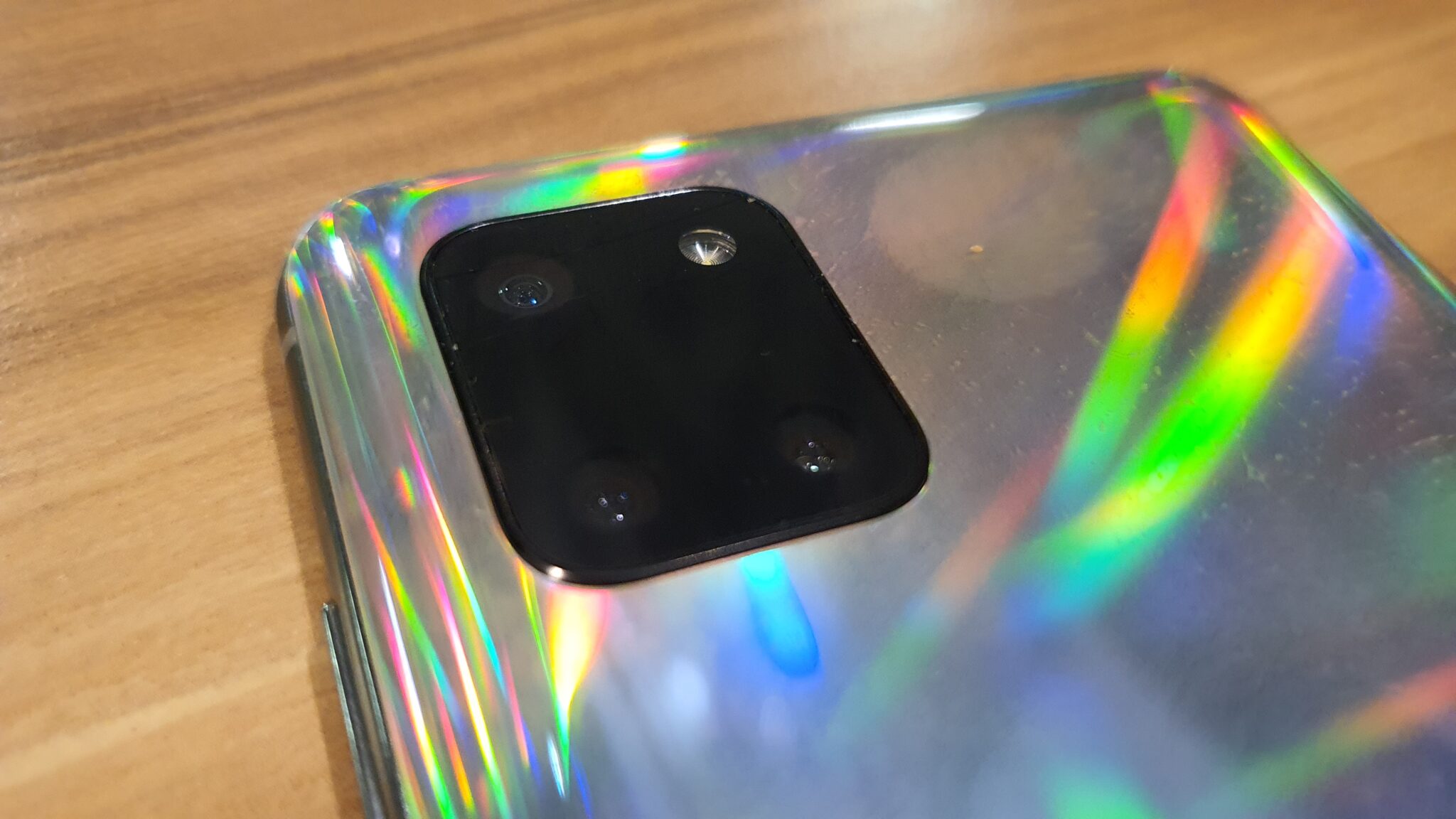 The primary camera sports an F/1.7 aperture with OIS though it lacks the Dual Aperture switching tech of its pricier siblings. The second camera comes with 2x optical zoom and the third one packs a 123-degree ultra-wide angle lens. Both the zoom and primary rear camera have optical image stabilisation. The front packs a 32-MP selfie camera. 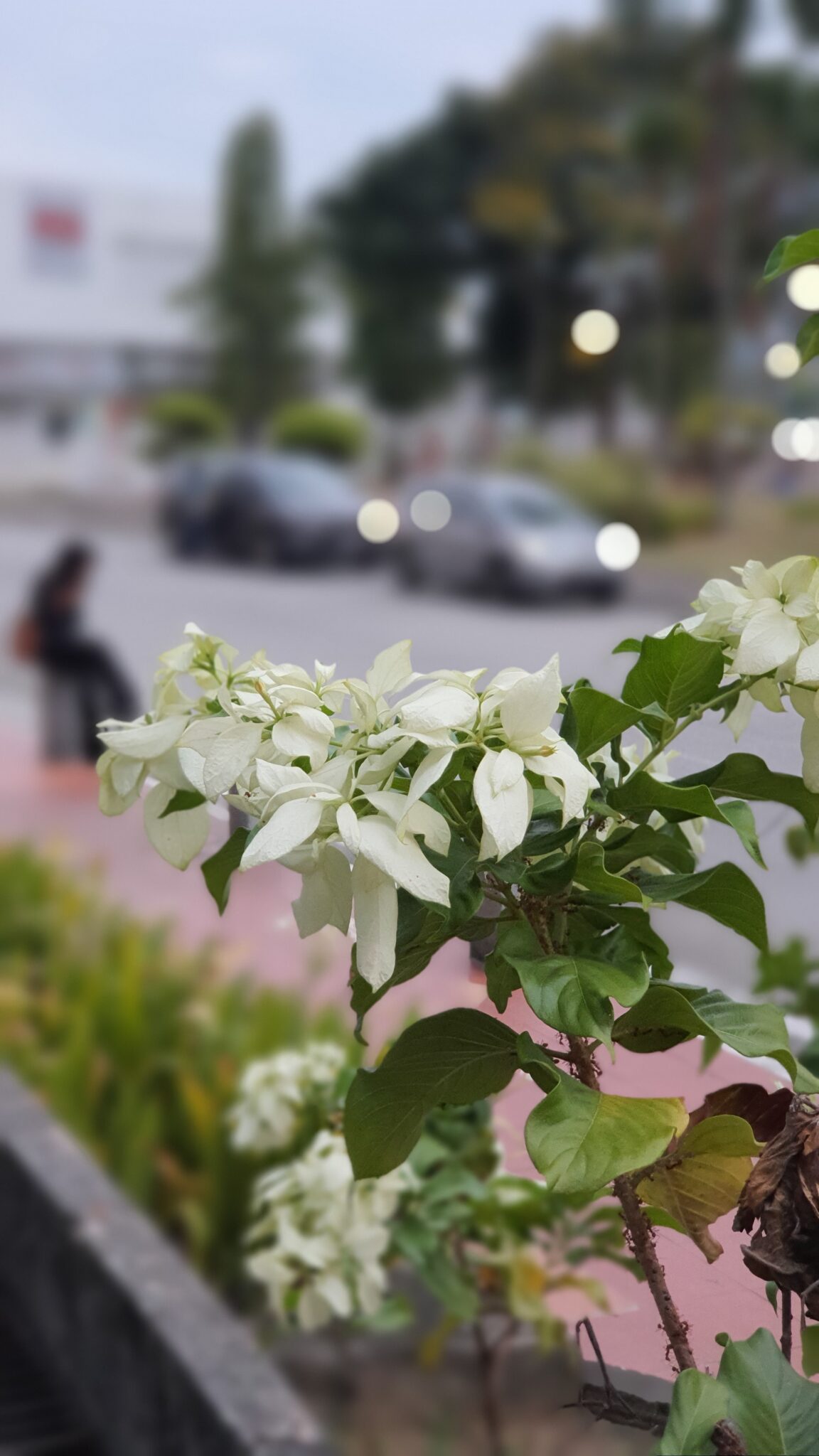 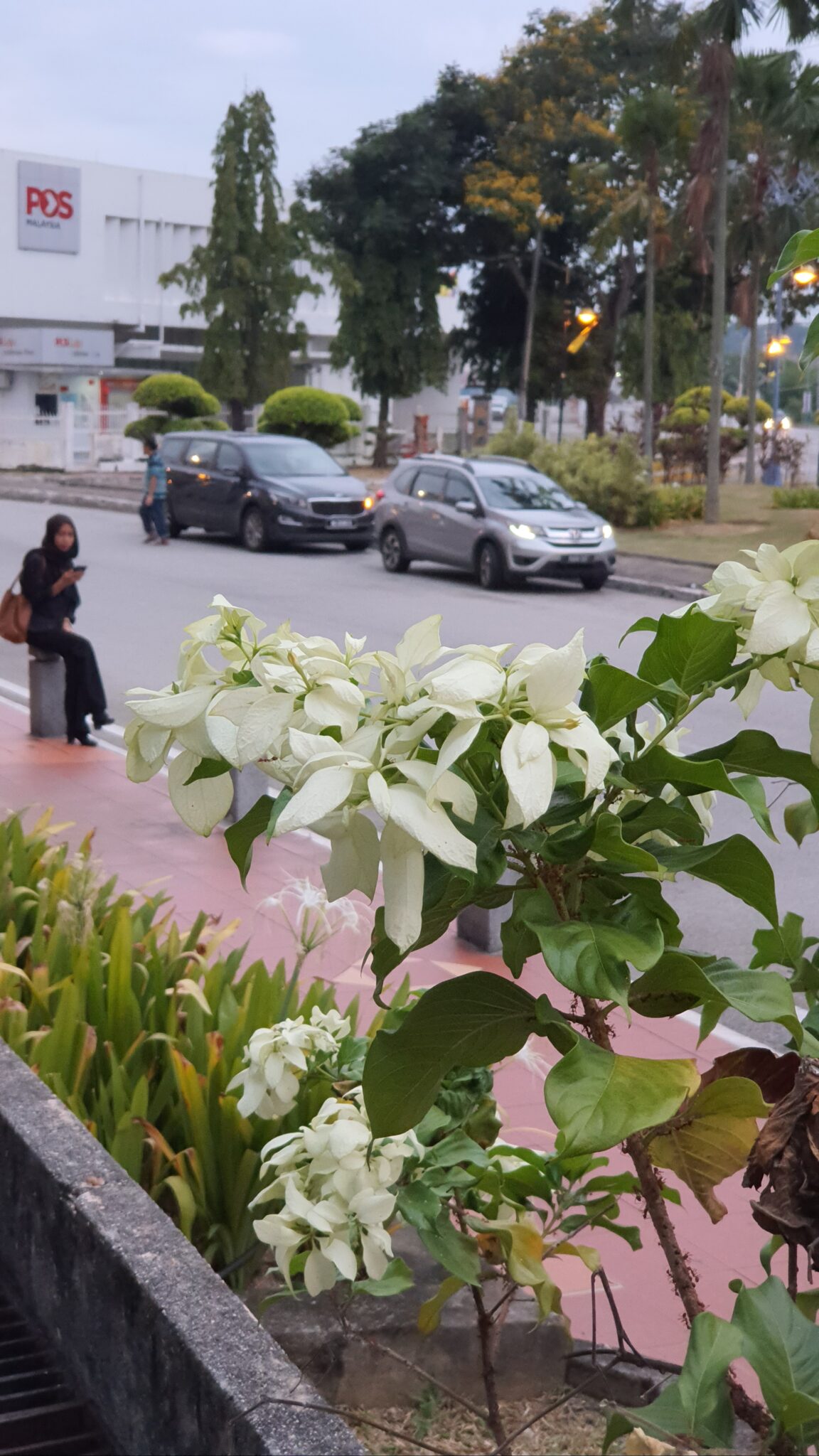 Live Focus Mode Off on the Galaxy Note10 Lite

The camera user interface is a mix between that of the Note10 and the Note9. There’s a Live Focus mode but only for stills and it lacks the ability to defocus or to desaturate the background. A Pro mode exists with the full monty of expected options including ISO, shutter speed, white balance and the like. There’s also a dedicated Night mode that requires a 4-second delay but which serves up better lit shots after dark. 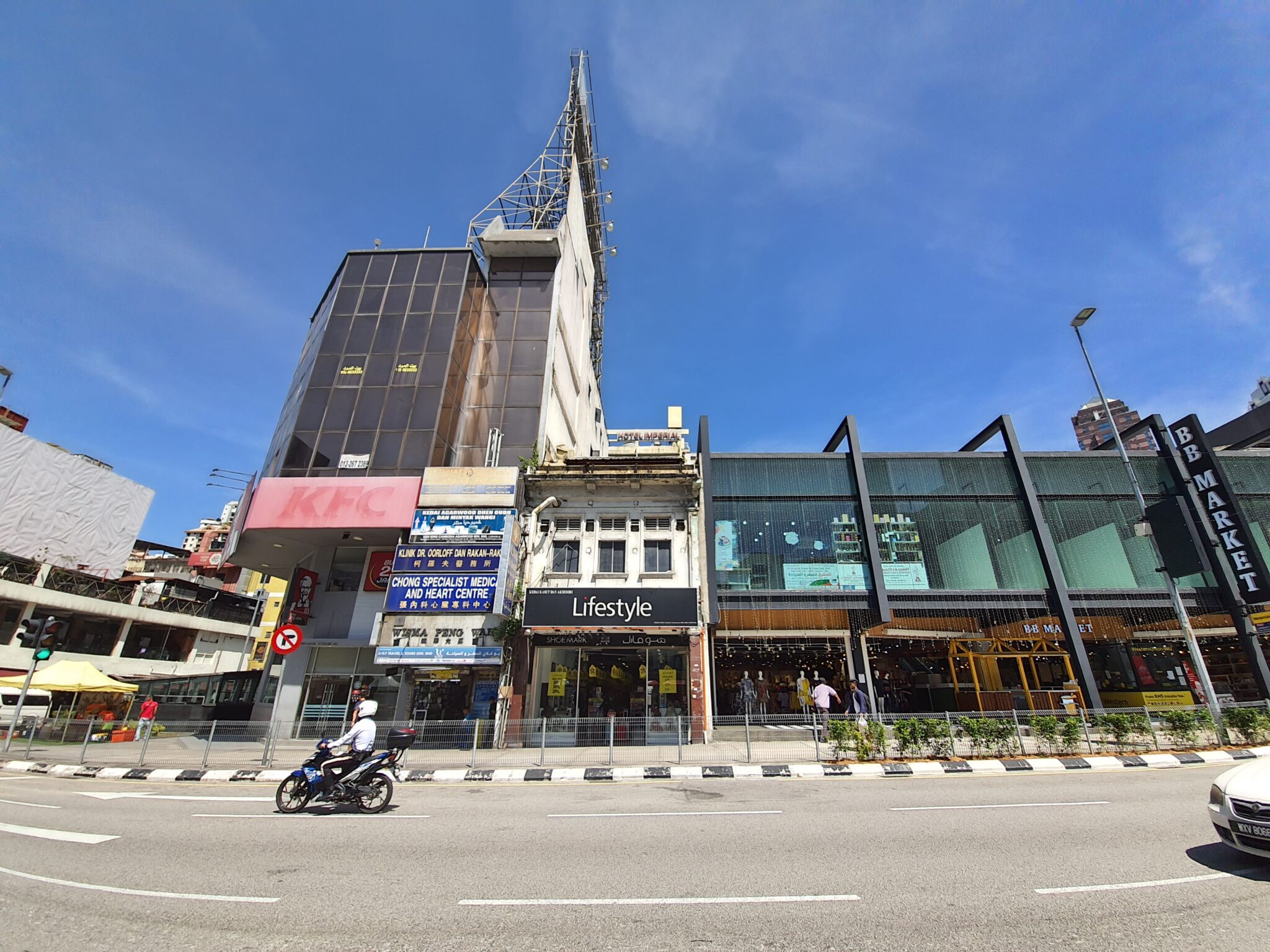 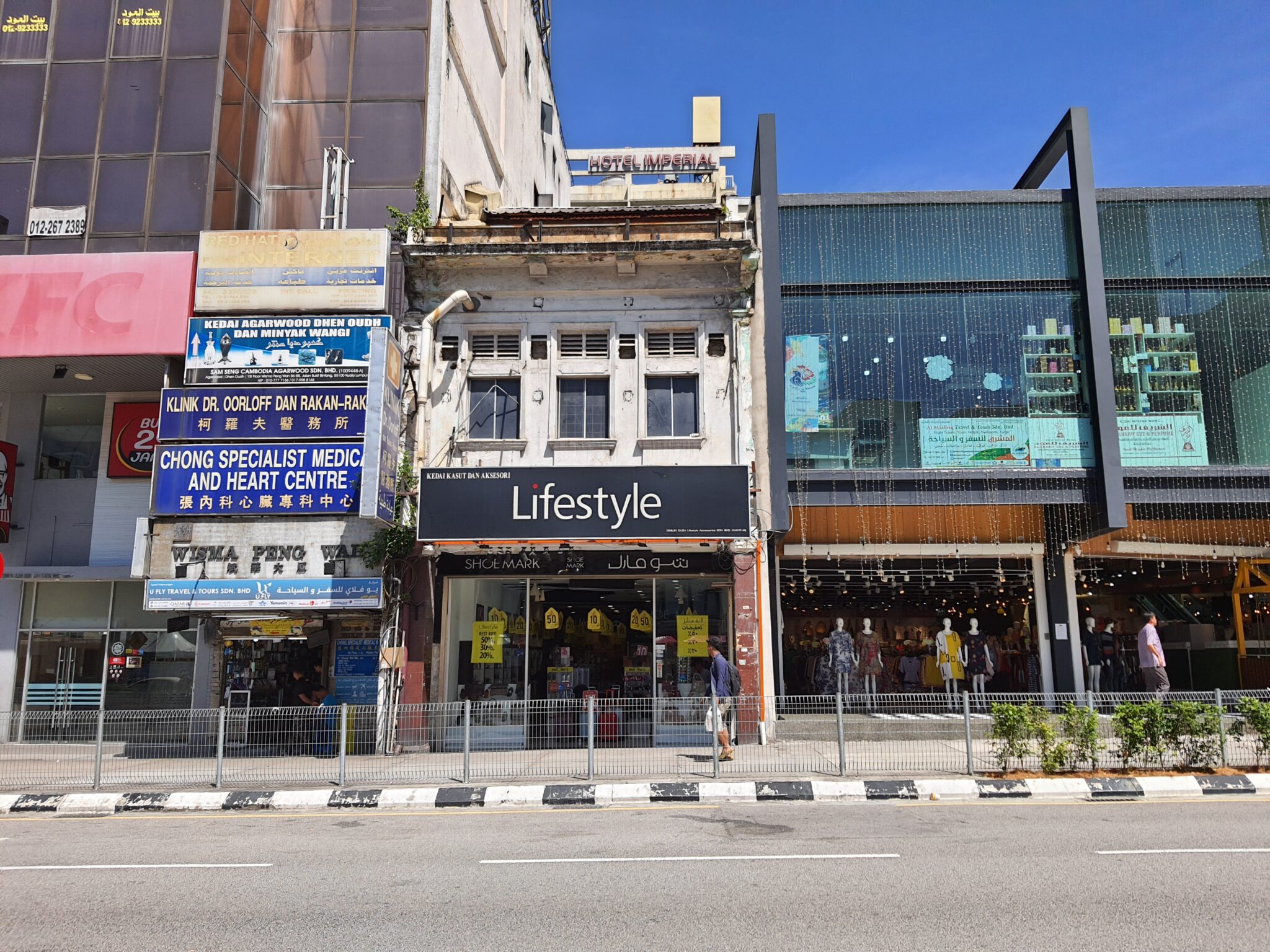 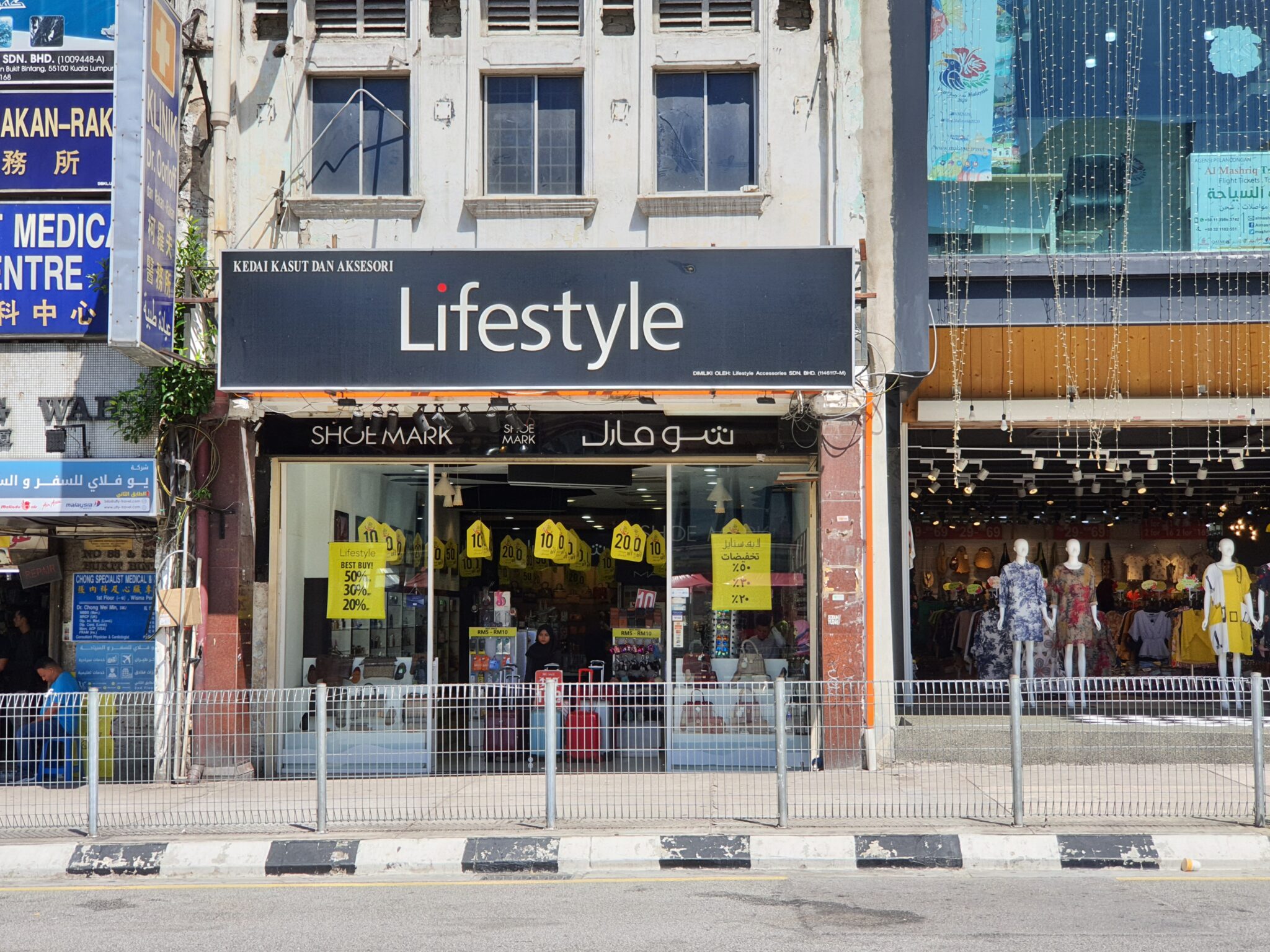 Shots taken off the cuff under daylight with the primary, wide angle camera and the optical zoom proved to be excellent under daylight, delivering Samsung’s characteristic aesthetic look with crisp detail and hues veering slightly towards on the vibrant side. 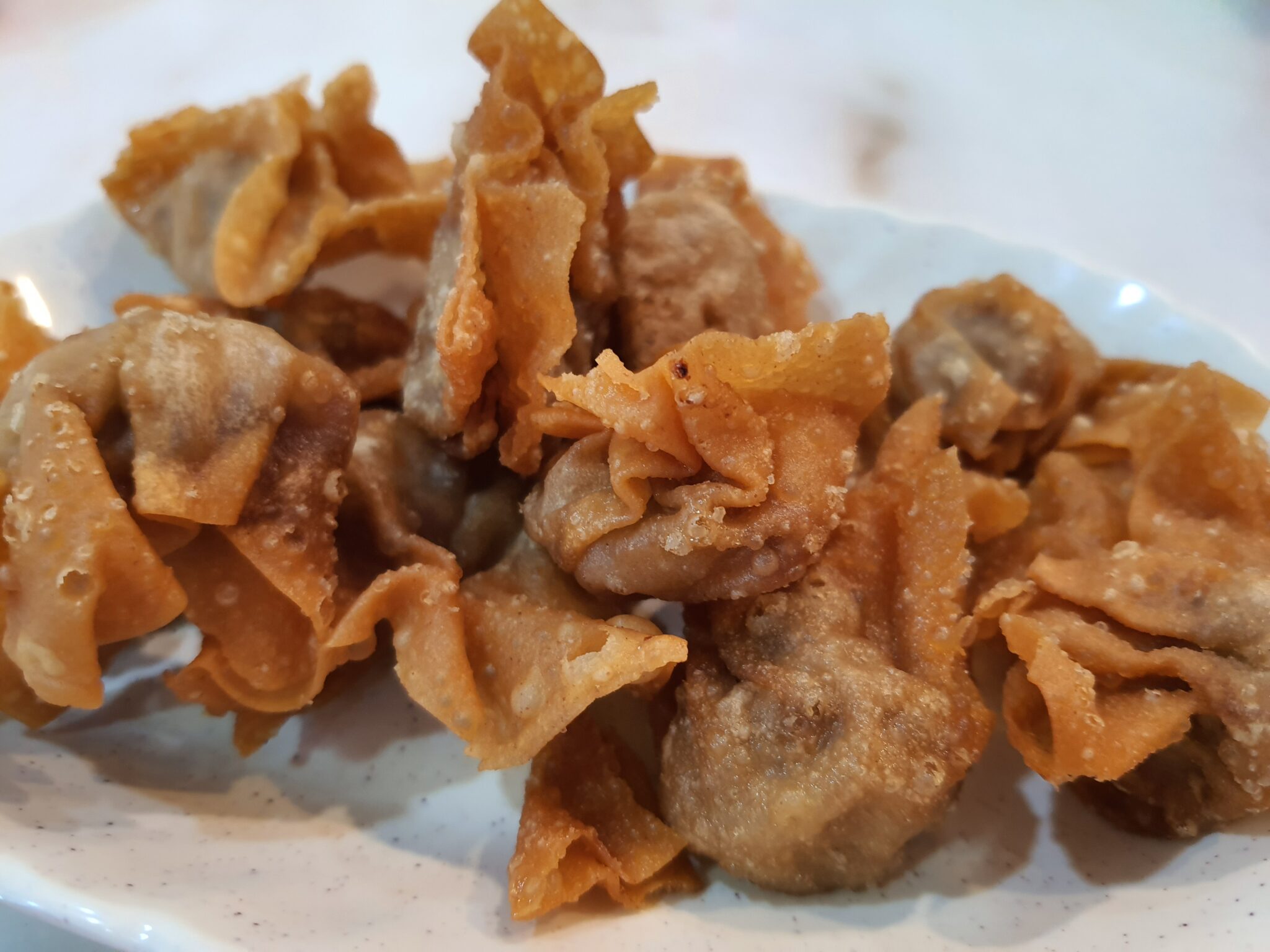 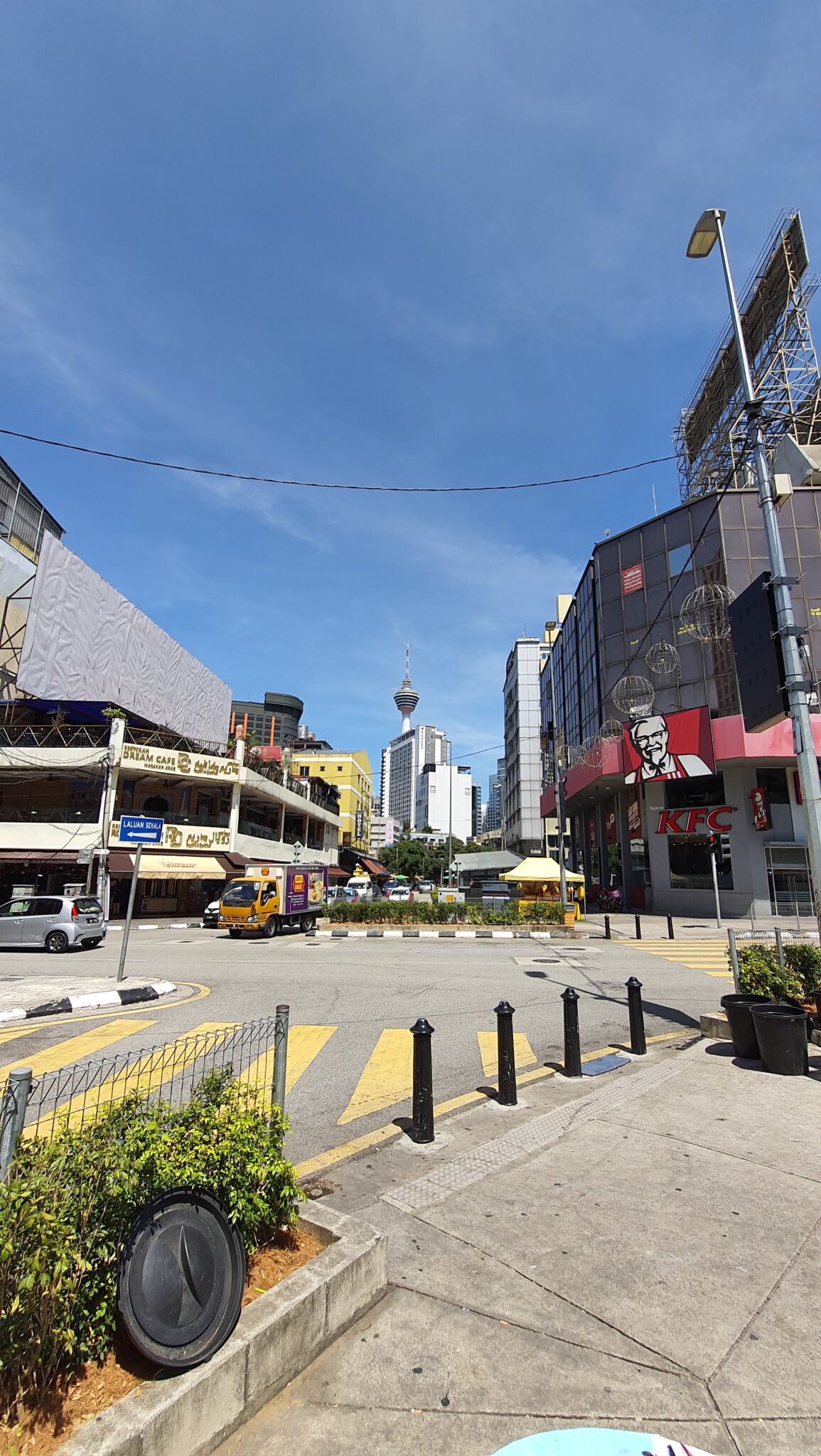 Shots after dusk in low light are equally good as well with the Night mode trading off a 4-second delay for better dynamic range and a bit more detail. Pixel peeping up close reveals some softness and noise but it’s more than adequate for more than enough quality for a Facebook or Instagram post. 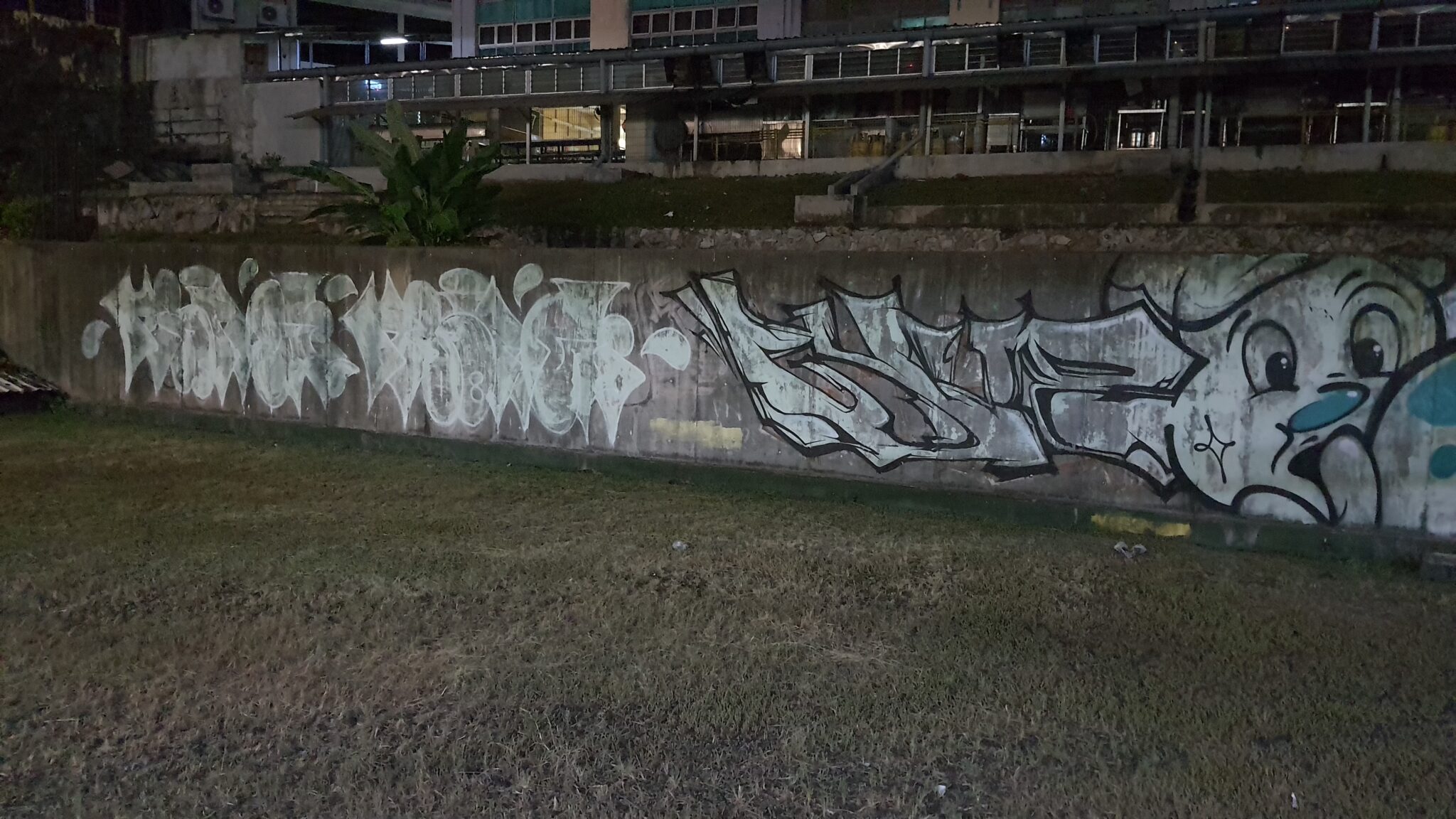 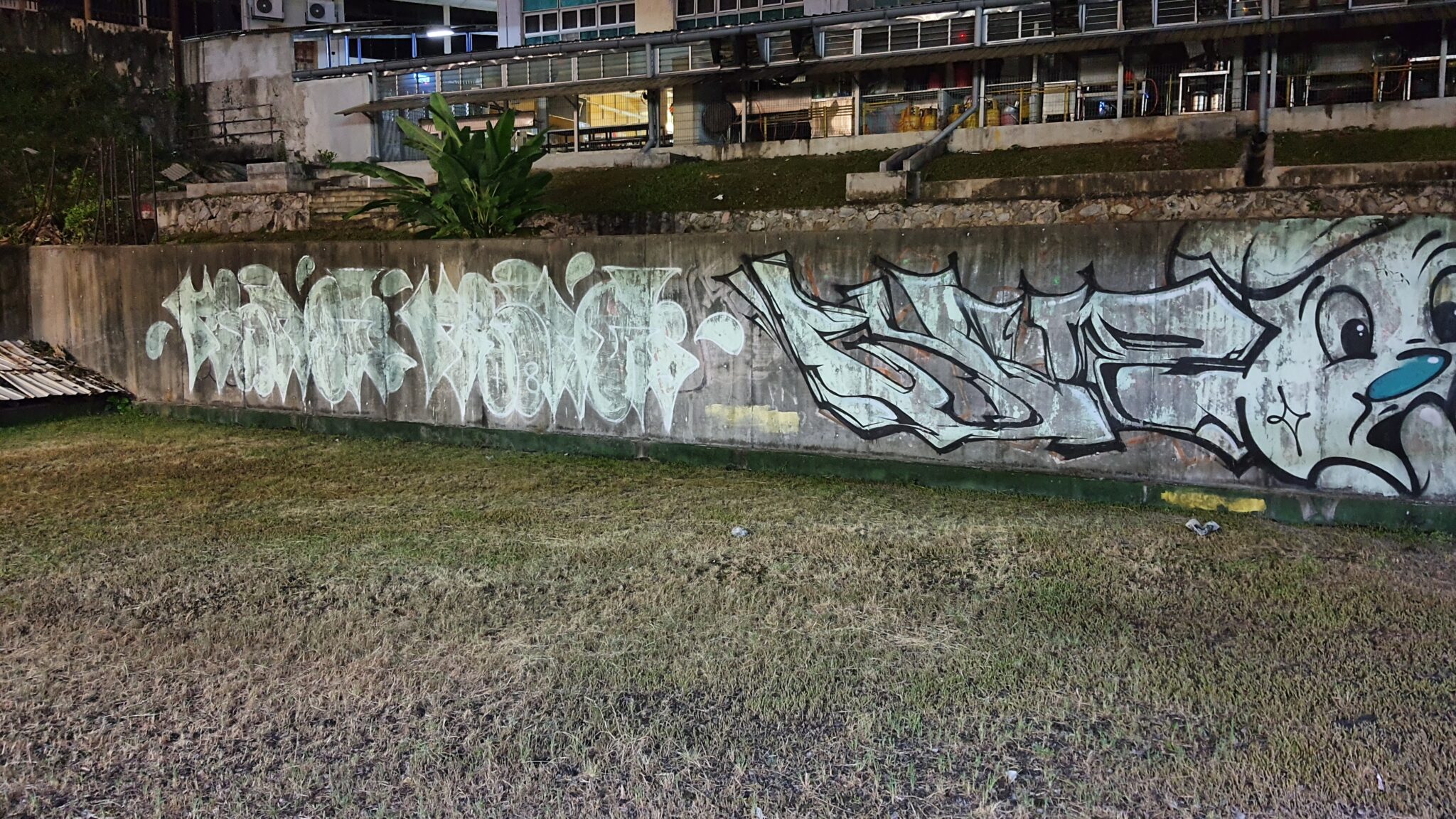 Both the front and rear are capable of capturing 4K video. Captured video at 4K is generally good with the provided OIS helping to smooth out most shots but electronic video stabilisation is only available at 1080P resolution, helping to manage hand shakes and gait judder to a much more significant degree. 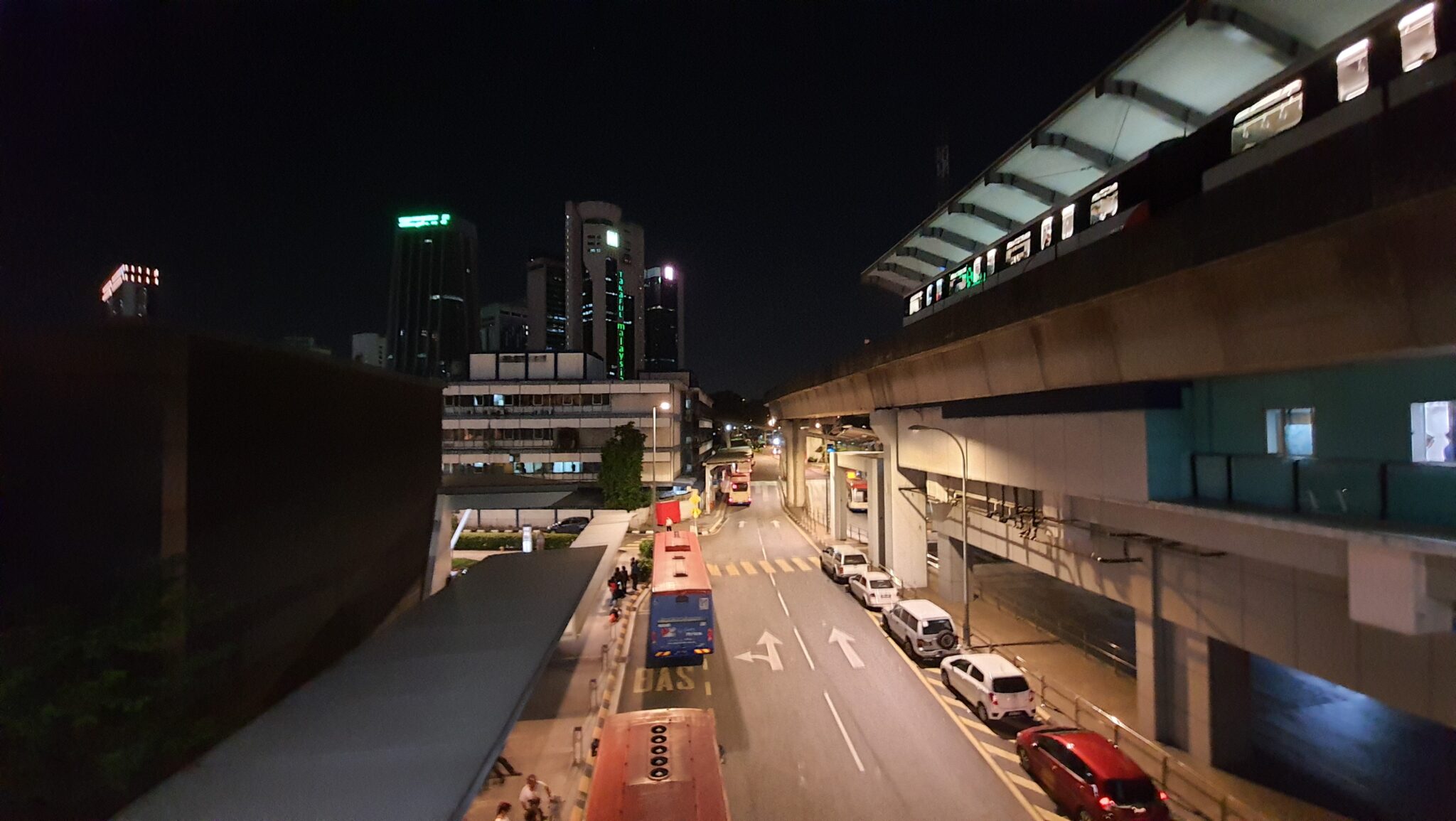 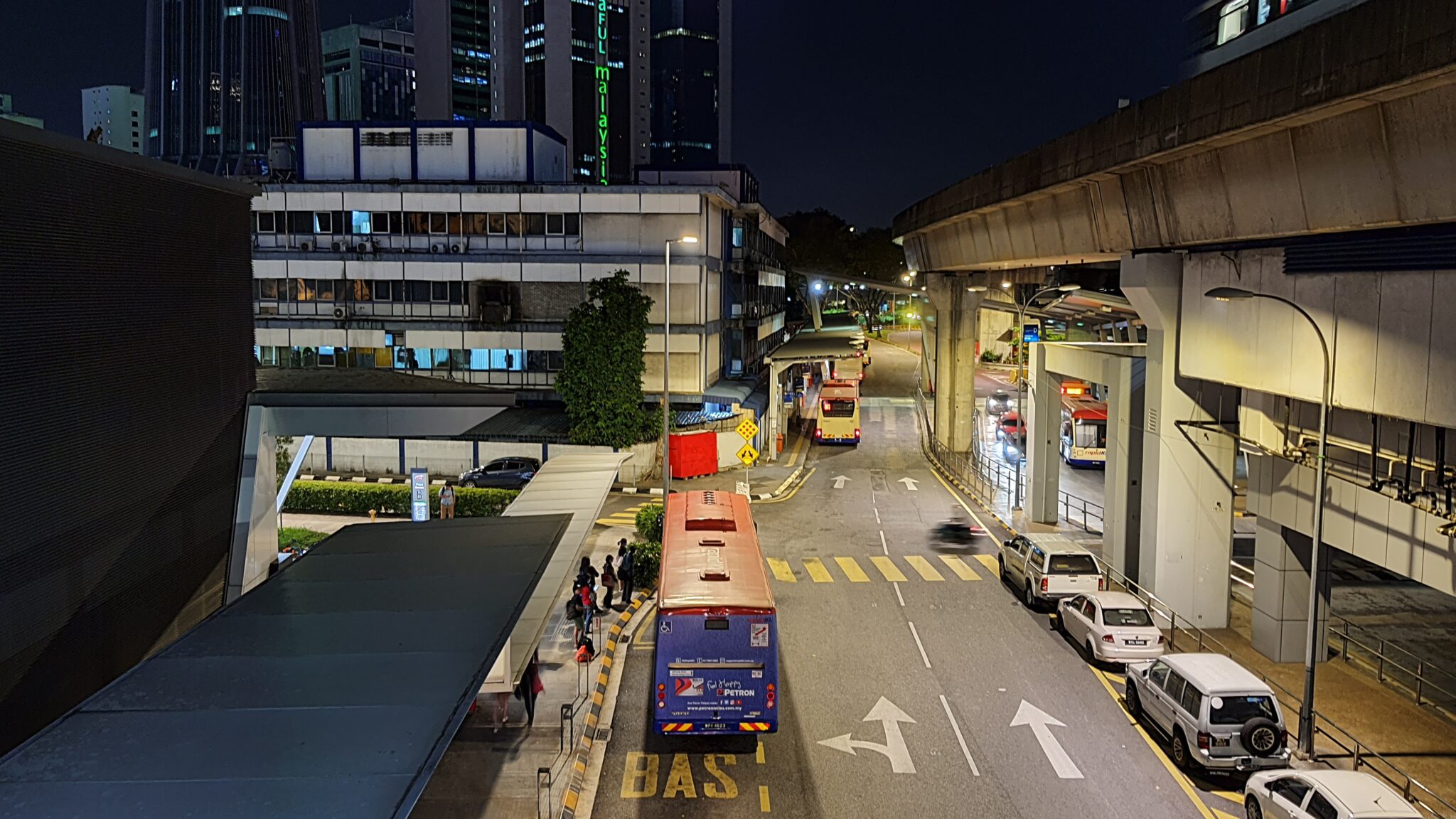 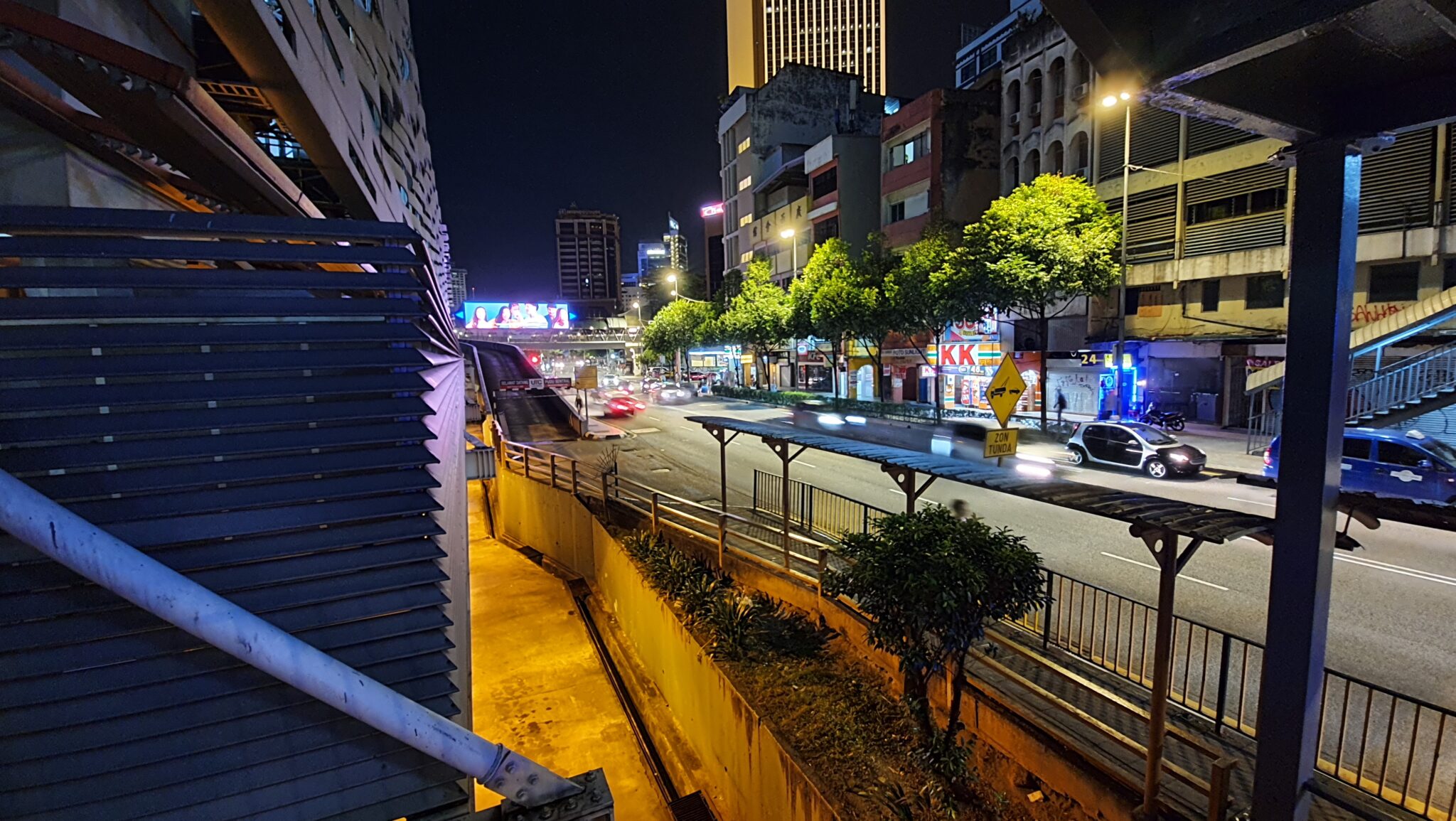 You’re getting top-shelf performance here that can give competing flagships a run for their money and which can acquit itself favourably against its pricier siblings like the Note10 and Note10+. 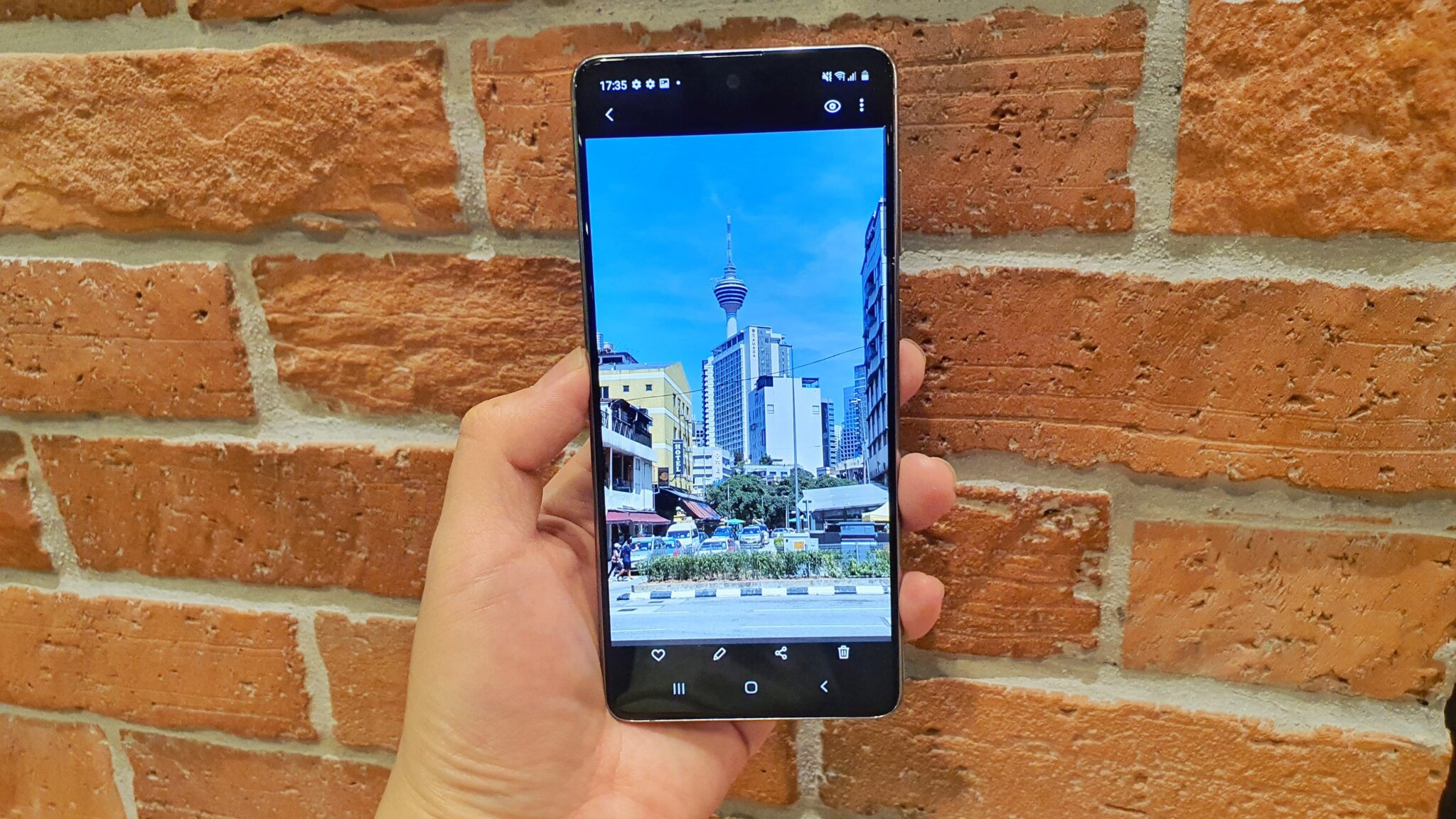 With a combination of WiFi and data on and screen brightness set to auto, the Note10 Lite was easily capable of lasting nigh on two days with a couple of hours of voice calls across both days, constant use of social media and a good several hours of movies combined with marathon Call of Duty Mobile gaming sessions. It was only by noon on day 2 that it merited a top-up.

The Galaxy Note10 Lite is an interesting phone indeed. You’re getting a premium experience with expandable storage, a vibrant Super AMOLED display, a decent set of cameras, incredible battery endurance and above all, the S Pen stylus. It even manages to retain a 3.5mm audio jack in the bargain, something its pricier siblings lack.

Unfortunately, it lacks DeX mode functionality, only has a mono speaker rather than the stereo setups of its pricier siblings and lacks IP water resistance. All of these omissions aren’t deal breakers but they’re something worth noting, pun notwithstanding, for power users. 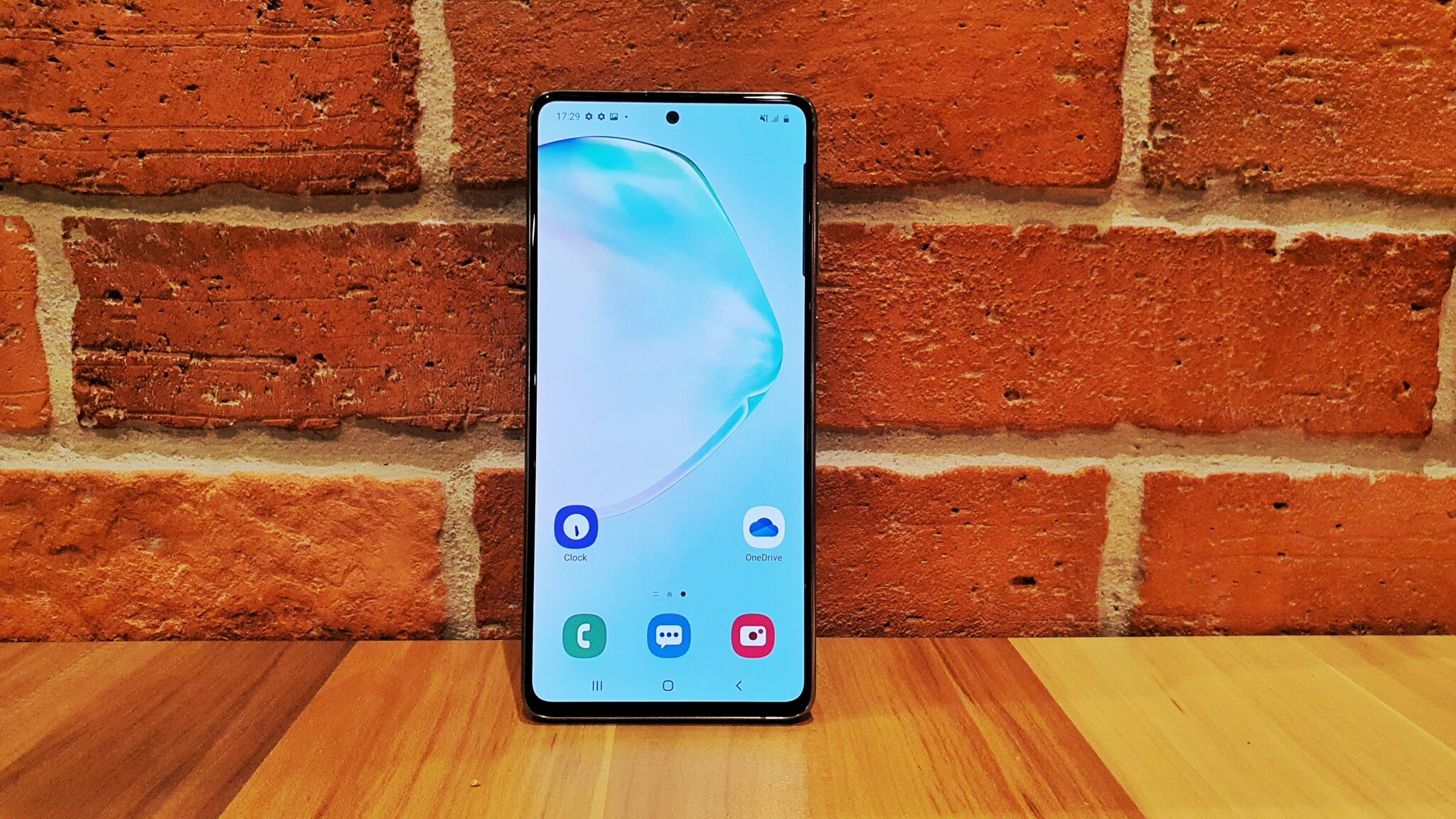 As it stands, the Galaxy Note10 Lite is a worthy proposition for those seeking an affordable way to get in on the Galaxy Note series experience. Its older predecessor the Galaxy Note9 is still a worthy contender that can still be found if you are fairly resourceful with similar specifications and a sharper display.

What we liked S Pen stylus works as remote control, huge battery, excellent Super AMOLED display, retains a 3.5mm audio jack, great cameras
What we didn’t Lacks DeX mode, has a mono speaker, no IP rating
We say The Galaxy Note10 Lite is one of the few, if not the only, smartphone in its price range with a stylus. While it has hardware that’s a bit long in the tooth, that does not dismiss the fact that it’s still a potent performer with immense battery life, a huge and vibrant display and a solid rear camera array. If you want the Galaxy Note experience, this is currently the most affordable and effective way to experience it now.