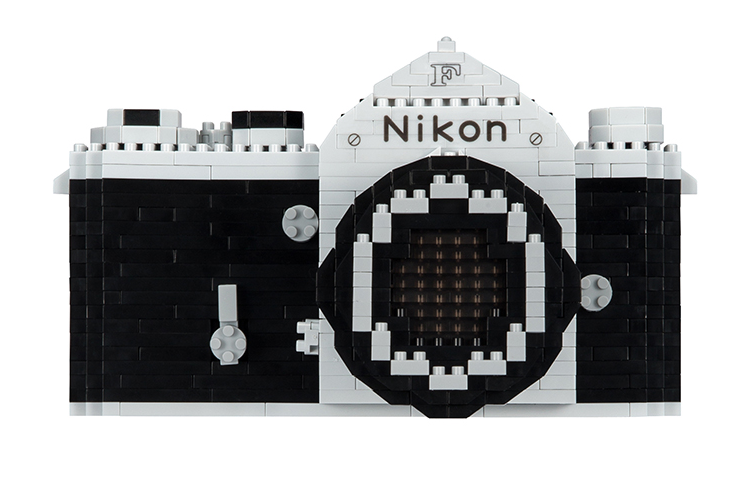 If you love vintage cameras and building things out of little blocks, rejoice as Nikon Japan has created something to indulge both your interests in the form of a special 1,000 piece Nanoblock set that, once constructed, resembles their first F SLR camera that rolled off the production lines back in April 1959 and saw production for some 14 years until they stopped making it in 1973.

It’s not exactly a 1:1 scale model as it measures in at about 84 x 148 x 75m but the Nanoblock model has loads of detail as you can see here compared to the original camera.

For the uninitiated, Nanoblocks are something akin to Lego blocks though rather than churning out playsets of popular franchises like Star Wars, Lord of the Rings and the like, their line-up of building sets primarily consists of popular tourist attractions and cute animals (oddly enough, Pokemon too) and, as mentioned earlier, features much smaller bricks. A 2×2 flat Nanoblock stud is just 8mm x 8mm and 5mm high. Plus side: they don’t hurt as much when you accidentally stomp on them compared to Lego blocks. True story.

For now, the Nanoblock Nikon F is only available for sale at the Japanese Nikon Direct website for about ¥3980 or about MYR139 though you’ll expect scalpers will be having a field day with this.

Gaze ye all and weep as you admire its splendorous beauty that you may not purchase because you’re not in Japan.

Alas, it’s unavailable outside of Japan so you’ll have to ogle it from afar for now though it’ll likely be available on eBay or through specialty importers.