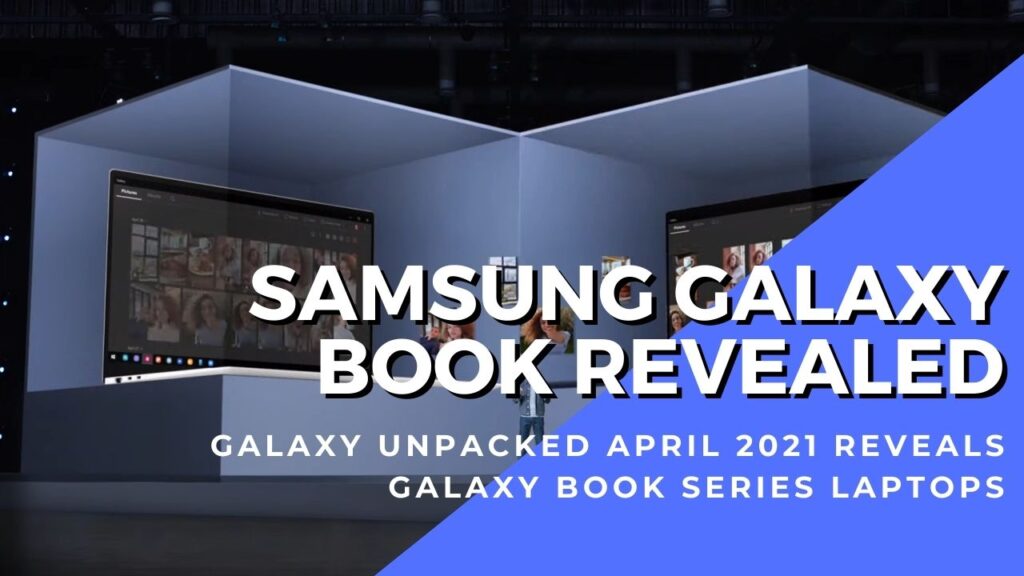 Samsung’s latest Galaxy Unpacked has revealed that they are rolling out the new Galaxy Book, Galaxy Book Pro and Galaxy Book 360 laptops in selected markets across the globe.

The Galaxy Book and Galaxy Book Pro featured a standard laptop form factor while the Galaxy Book 360 features 360-degree hinges and a touchscreen to turn it into a convertible. 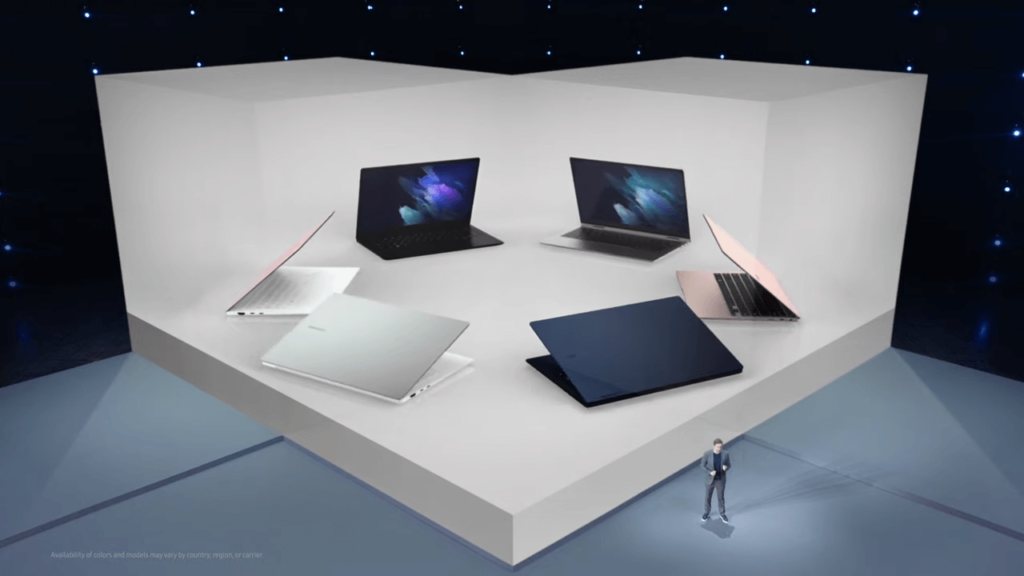 Processor options vary with 11th Gen Intel Core  i3, i5 and i7 processors or alternatively Intel Celeron or Pentium Gold CPUs, Intel Iris Xe if you have an 11th Gen i5 or i7 CPU, Intel UHD graphics or an NVIDIA GeForce MX450 GPU. 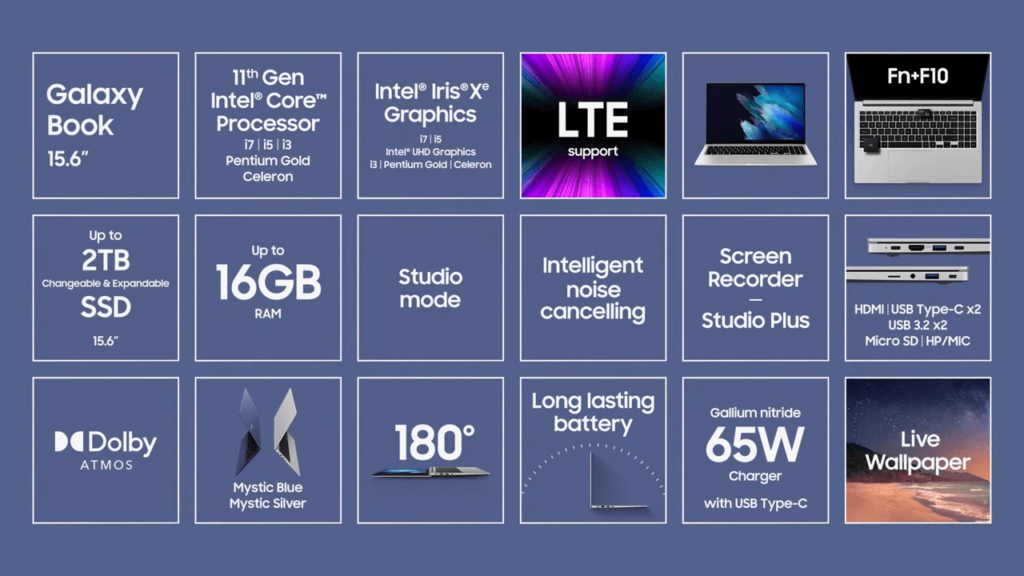 RAM maxes out at 16GB with up to a 1TB SSD and connectivity options include LTE and WiFI 6 Gig+ along with Bluetooth v5.1. It also features 65W USB-C fast charging and fingerprint biometrics in selected models. 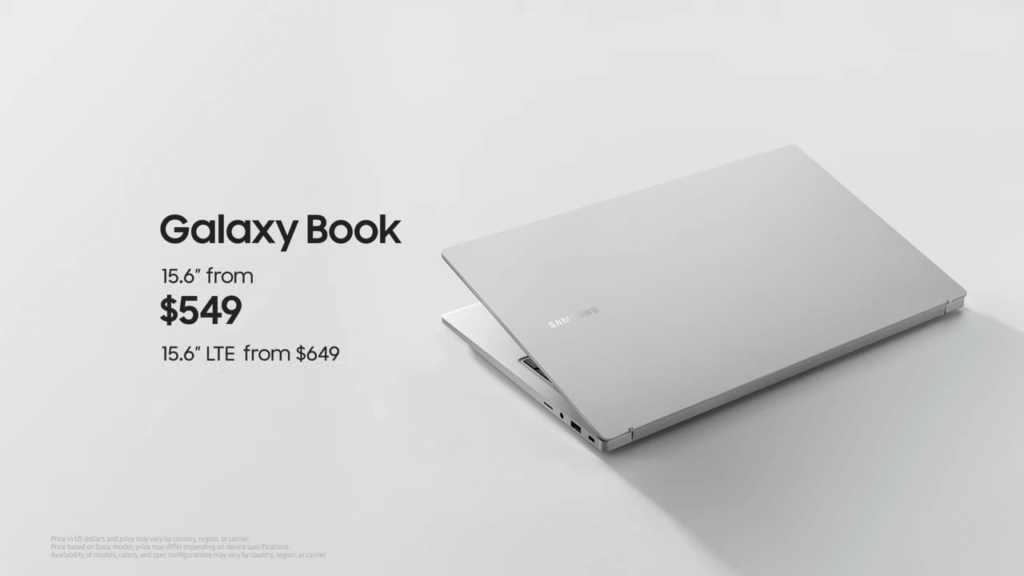 Colour choices consist of either Mystic SIlver or Mystic Blue with prices from US$549 with the LTE-enabled version from US$649.

In terms of specifications, the Galaxy Book Pro primarily comes in two different sizes with your choice of either a 13.3-inch Full HD AMOLED or 15.6-inch Full HD AMOLED display. Under the hood, it runs Windows 10 on the latest 11th Gen Intel Core processors in i3, i5 and i7 flavours.

Depending on processor, you’ll get Intel UHD graphics (i3), Intel Iris Xe graphics (i5 or i7) and the option of an NVIDIA GeForce MX450 GPU. Paired with this is up to 32GB DDR4 RAM, up to a 1TB SSD, Dolby Atmos stereo speakers and a full suite of connectivity options including WiFi 6E support and LTE depending on region. 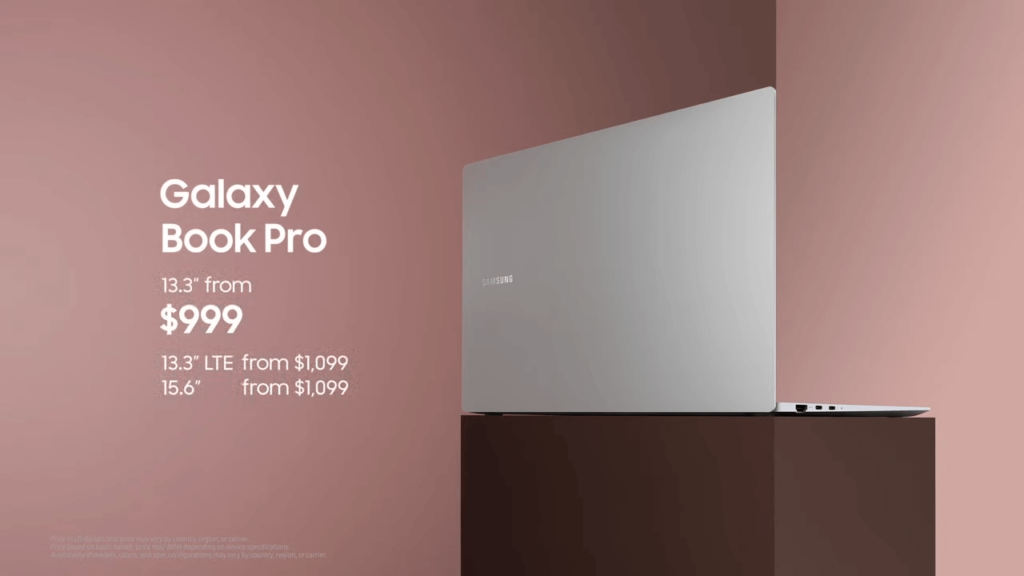 The triumph in engineering here is that they’ve managed to shave the weight down to just 870g for the 13.3-inch inch version and just 1.05kg for the 15.6-inch version. Other mod-cons include 65W USB-C fast charging as well as fingerprint authentication. 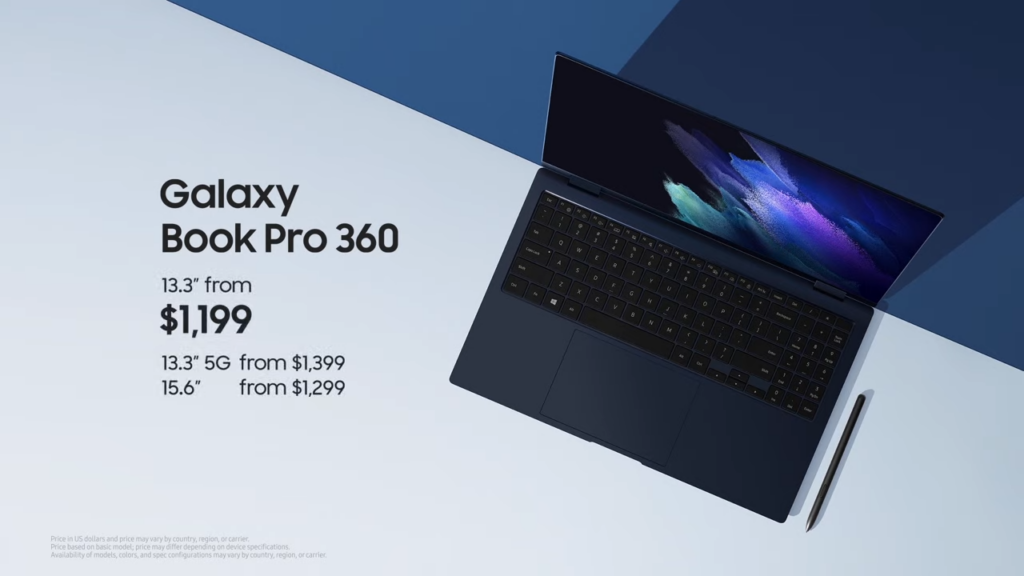 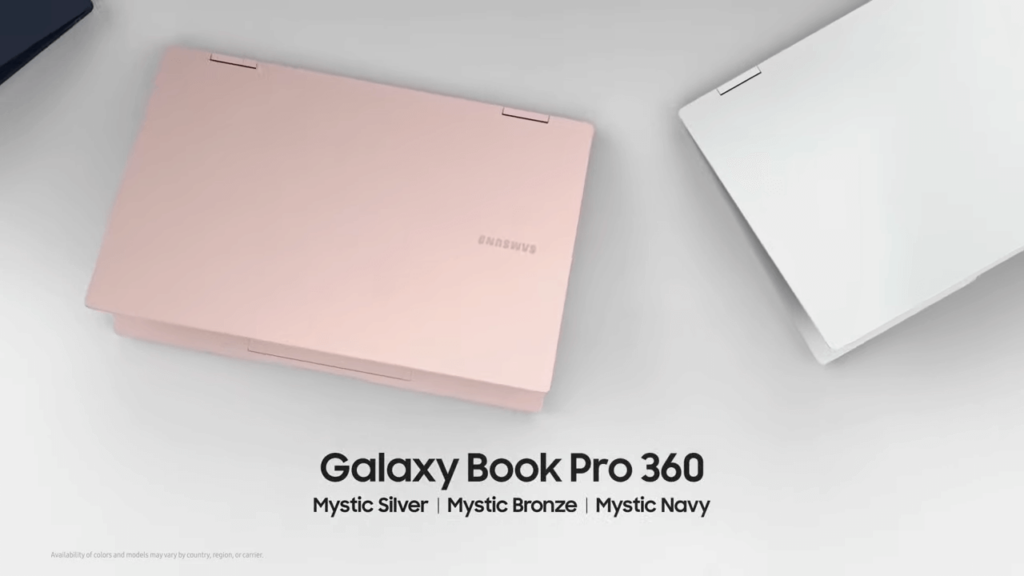 The pinnacle of Samsung’s line-up, the Galaxy Book Pro 360 has the best specifications and hardware of the new trio of laptops. They’ve devoted all their efforts here into slimming it down while taking a leaf from the Galaxy Fold foldables in creating the 360-degree hinges to ensure that it remains one of the thinnest convertibles that money can buy at 11.5mm. 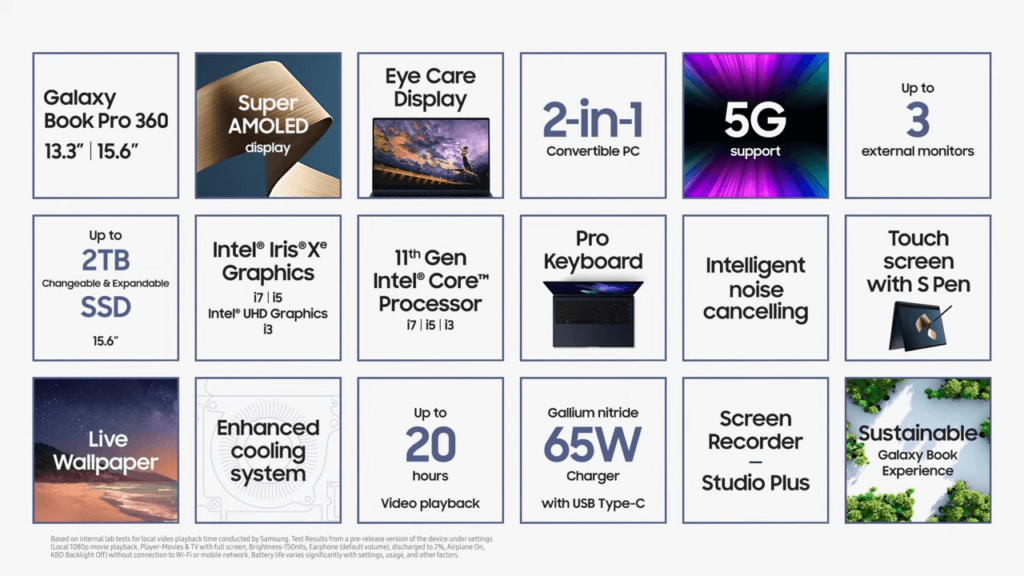 The Galaxy Book Pro comes with either a 13.3-inch or 15.6-inch Super AMOLED Full HD display, an 11th Gen Intel Core i3, 15 or i7 processor, either Intel UHD graphics or Iris Xe graphics, up to 32GB DDR4 RAM, up to a 1TB SSD, fingerprint authentication for biometric security on the power button and 65W USB-C fast charging. 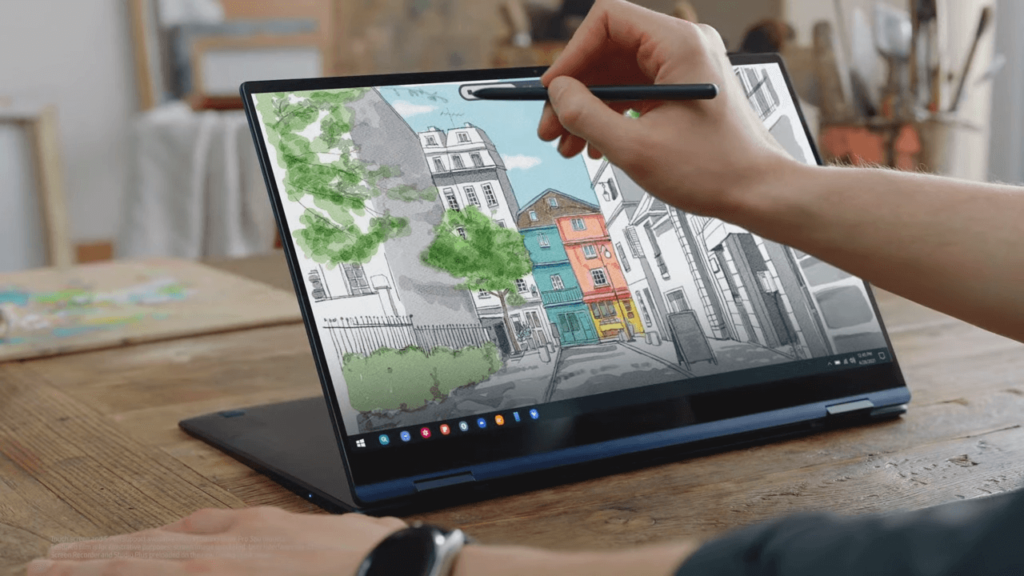 It also ships with an S Pen stylus and has WiFi 6E (Gig+ and 5G connectivity to make it a supremely well rounded multimedia platform.

Unfortunately the Galaxy Book series will, in all likelihood, won’t make it to Malaysia in any shape or form in the near future so it’ll be something to admire from afar for now unless you go via alternative channels to acquire a working sample. Even so, you’ll likely have to encounter warranty issues as you likely can’t get it fixed should the unforeseen happen. 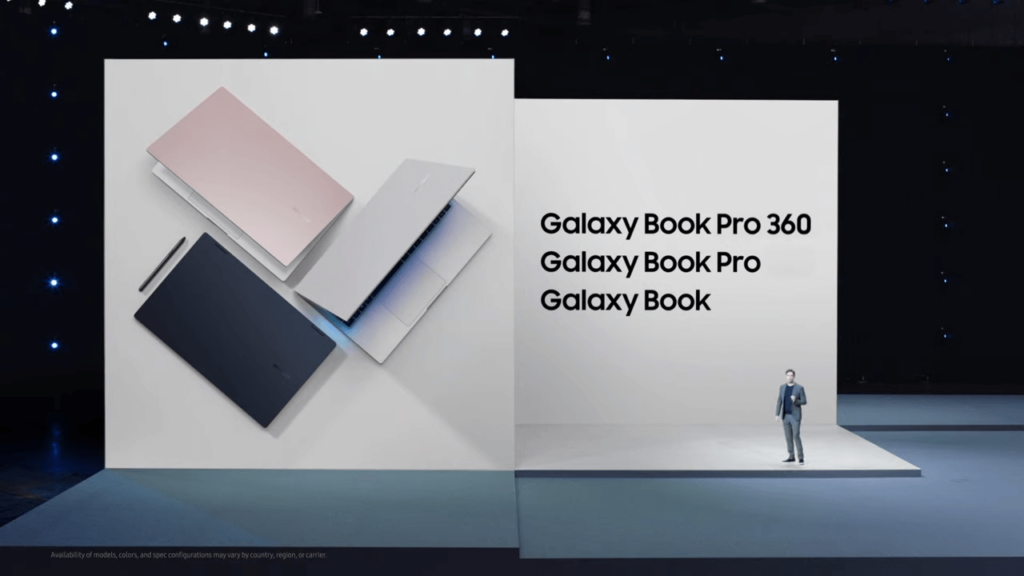