Time to get your game face on and your wallets ready as MSI’s aiming to dominate the competition with the launch of their latest gaming notebooks which were first glimpsed at Computex 2019. Landing in Malaysia today is MSI’s pride and joy, the massive, the insanely well specced and blinged GT76 Titan that is every bit a behemoth as its name would indicate in two slightly different subvariants.

MSI also took the opportunity to launch the slightly lighter GE65 Raider gaming notebook which also made a debut at Computex. Here’s how they both stack up, what hardware they have under the hood and when you can acquire MSI’s latest gaming beauties… 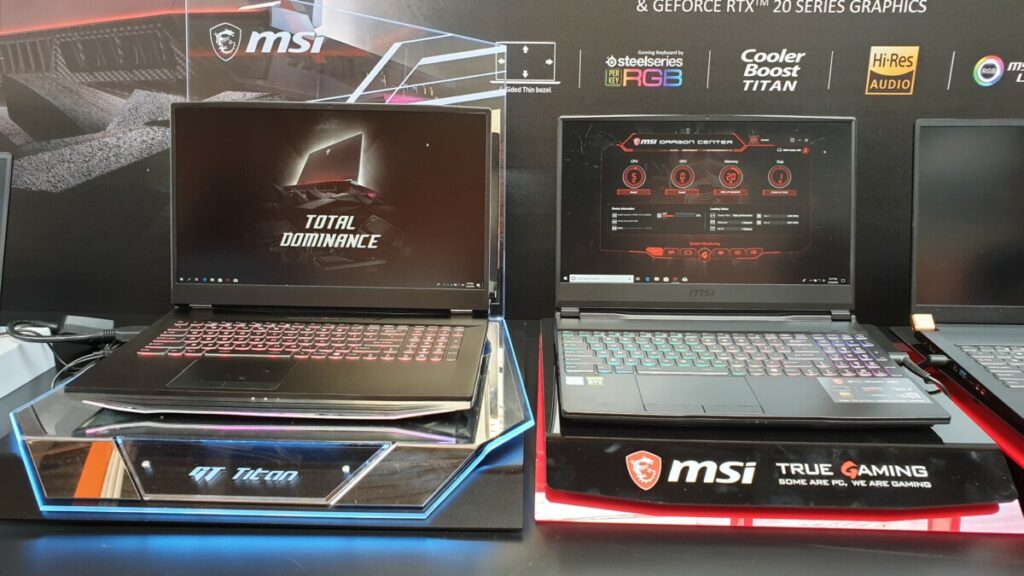 From left: the MSI GT76 Titan and the MSI GE65 Raider gaming notebo0ks – both of these beauties are now available in Malaysia

If you dialled everything to eleven for a gaming notebook from power to good looks, you’d get MSI’s wunderkind the GT76 Titan. Externally, the GT76 Titan has the design language atypical of an MSI gaming rig – aggressive lines, their Dragon Army logo subtly engraved on the top lid and lashings of red trim all around its chassis that is hewn of carbon fiber and aluminium combined with a hint or two of RGB lighting along the sides and the keys of the SteelSeries keyboard proper. 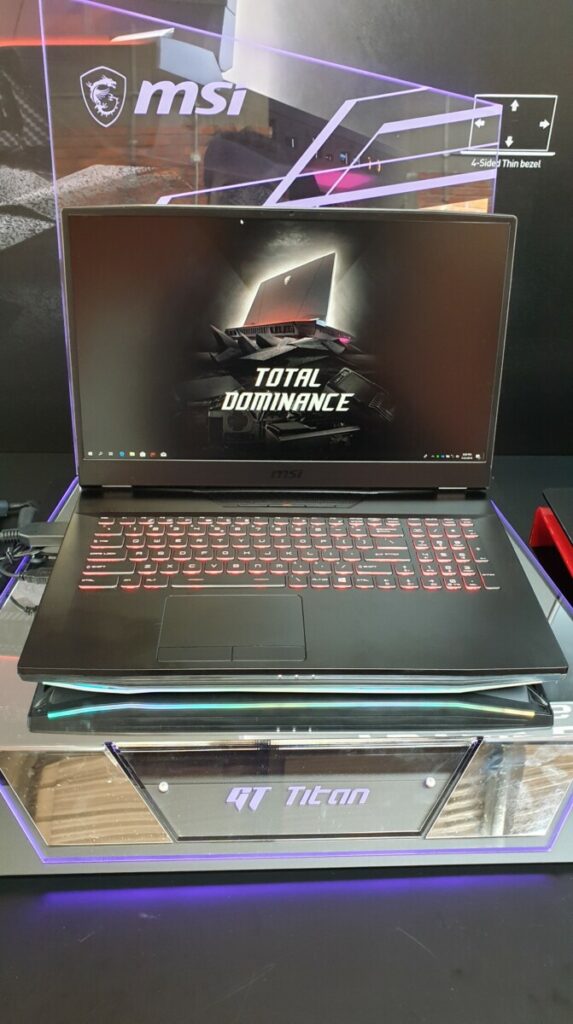 Seeing as the GT76 sports the latest Intel i9 series processors and NVIDIA’s RTX series graphics cards, its a given that it will generate a LOT of heat but MSI has that covered as the GT76 comes with not one, not two but a whopping four cooling fans and eleven heat pipes to ensure its gaming hardware remains pleasantly chill even under intense work loads. In Malaysia the GT76 comes in two slightly different variants that differ primarily in terms of their hardware – the GT76 DT 9SG and the GT76 DT 9SF.

The GT76 DT 9SG is the most powerful variant with a 17.3-inch 4K resolution display that can display 100% of the sRGB colour space. This is paired with a 9th Gen Intel Core i9-9900HK processor that can support overclocking up to 5.0GHz, 64GB DDR4 RAM, an NVIDIA GeForce RTX2080 GPU with 8GB GDDR6 VRAM and a humongous 1TB (512GB x2) NVMe PCIe Gen3 x 4 SSD paired up with a 1TB hard disk. Other mod-cons include their Killer Double Shot Pro tech that combines Killer Wi-Fi 6 AX160 and Killer Ethernet E3000 support, Bluetooth 5.0 as well as Dynaudio stereo speakers. All this means that the GT76 DT9SG weighs in at a rather hefty 4.5kg and retails for an equally impressive RM20,999.

If your pockets aren’t as deep, you can opt for the GT76 DT 9SF that’s a bit cheaper and retains its siblings mammoth storage capacity but trades it in for a 17.3-inch Full HD display with a 240Hz refresh rate, a 9th Gen Intel Core i7-9700HK that’s also capable of overclocking up to 5.0GHz, an NVIDIA GeForce RTX2070 card with 8GB GDDR6 VRAM and 32GB of DDR4 RAM. It weighs just as much as the GT76 DT 9SG but is a wee bit cheaper at RM14,999.

The GE65 Raider attempts to strike a balance between affordability and cost while still being able to comfortably tackle high end gaming. For Malaysia, the GE65 comes in two variants but both have an externally similar chassis dubbed the GE65 9SF and the GE65 9SE. 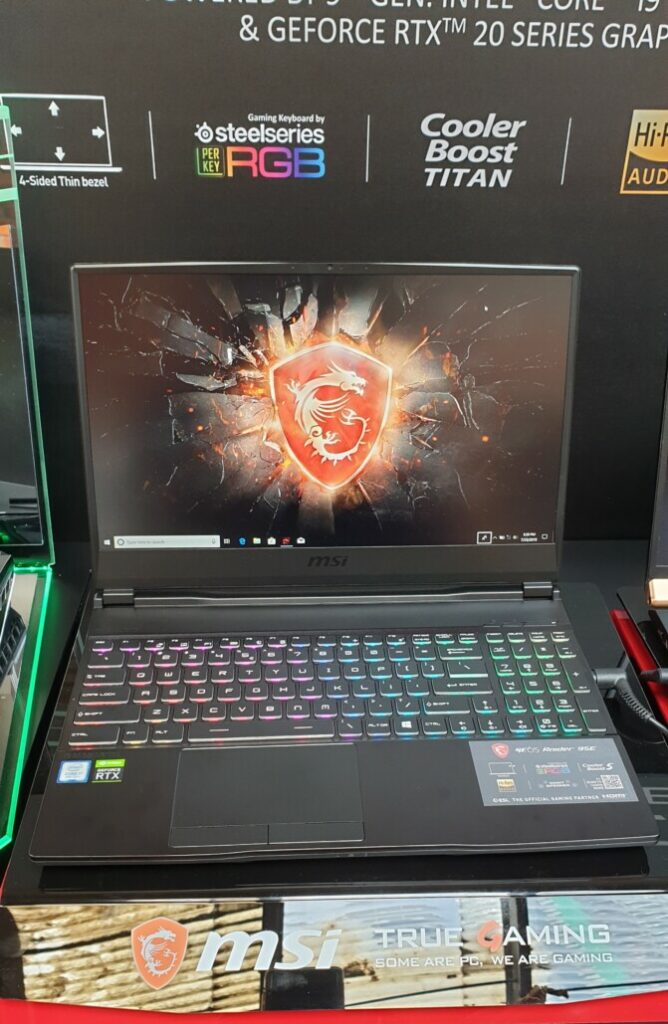 Sure, where can i buy the MSI GT76 Titan and GE65 Raider?

Both gaming notebooks will be available nationwide sometime in August at all authorised retailers nationwide. According to MSI Malaysia, there will be a preorder programme with goodies for the GT76 but details are scarce as of now. We’ll keep you posted as we get updates. For more details swing by their official Facebook page at www.facebook.com/MSIMalaysia and their official page at https://my.msi.com/ 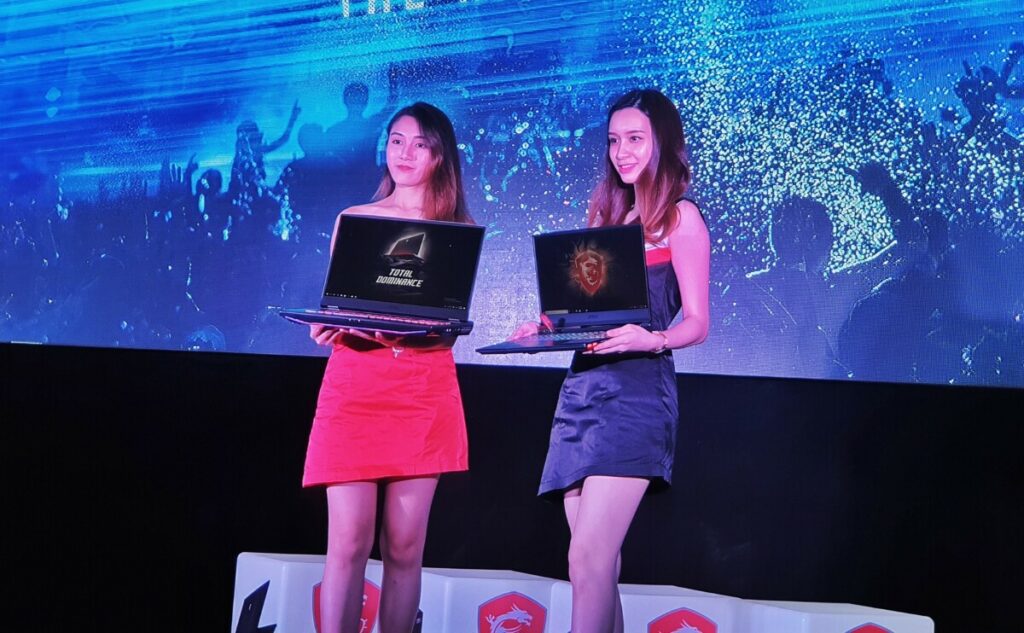