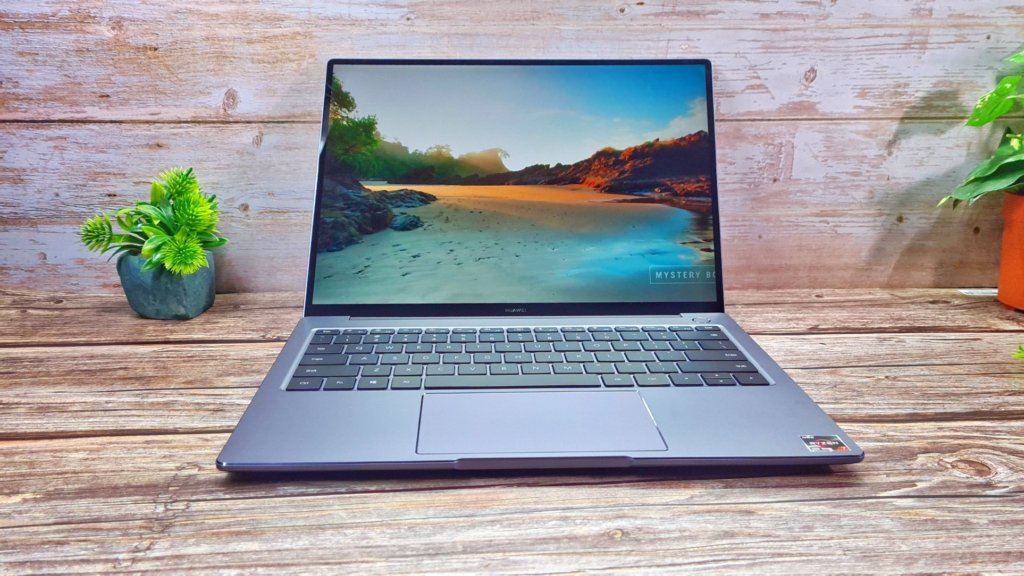 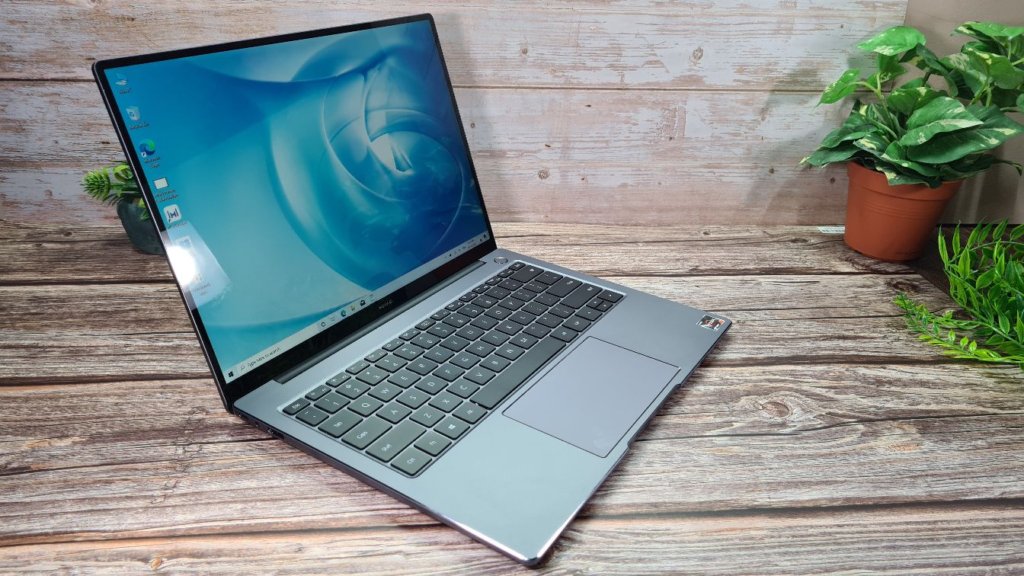 The MateBook 14 2020 from Huawei comes with the bare minimum of essentials. Outside of its sturdy box, you get a 65W USB charger with a UK-style plug, a USB Type-C to USB Type-C cable and the notebook itself.

If you are an early bird, you can lock down a free laptop bag, a Bluetooth mouse and a pair of Huawei FreeBuds 3 wireless earbuds worth a collective RM1,177 on the house when you buy the MateBook 14. That’s amazing value any way you slice it if you get it early. 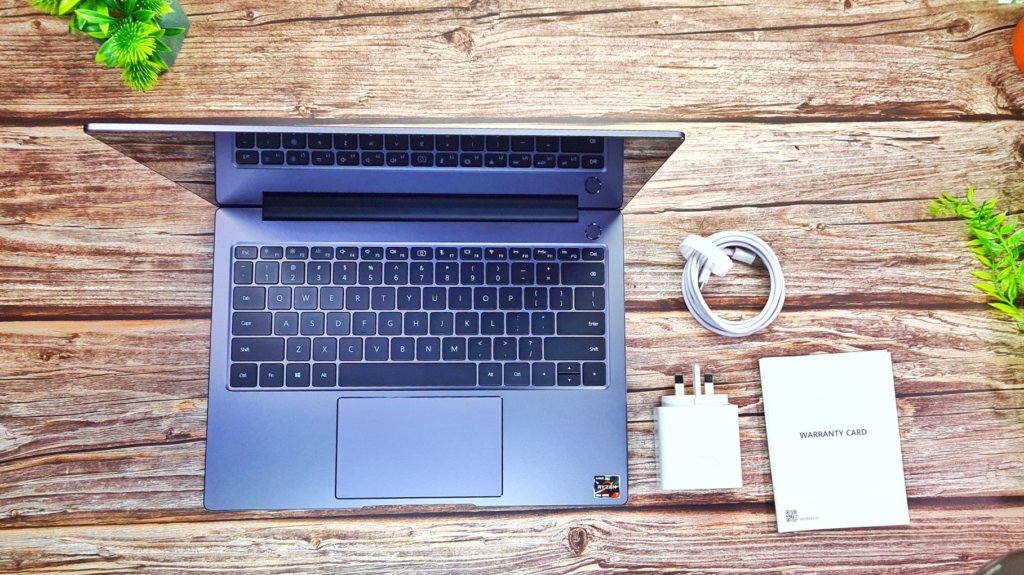 In terms of design and build, the MateBook 14 doesn’t fall too far from the proverbial ultrabook tree. It has a traditional laptop form factor with a steel gray machined aluminium casing all around. Rather than sharp edges, Huawei has gone for a more rounded aesthetic with the laptop having gentle curves all around rather than any chamfering or beveling.

Build quality overall is excellent without any flex or give in the chassis and the whole affair has a pleasant heft to it on account of its aluminium finish while weighing in at a modest 1.49kg. The MateBook 14 is also relatively slim as well at 15.9mm.

The top lid is otherwise one uniform steel gray finish save for the Huawei logo emblazoned on top while the underside has two downward firing stereo speaker grilles along with the cooling vents for the dual cooling fans on its underside. Two raised lengths of rubber allow for some measure of friction to keep the laptop secure from slipping on a flat surface while also offering a bit of airflow for the aforementioned cooling solution. 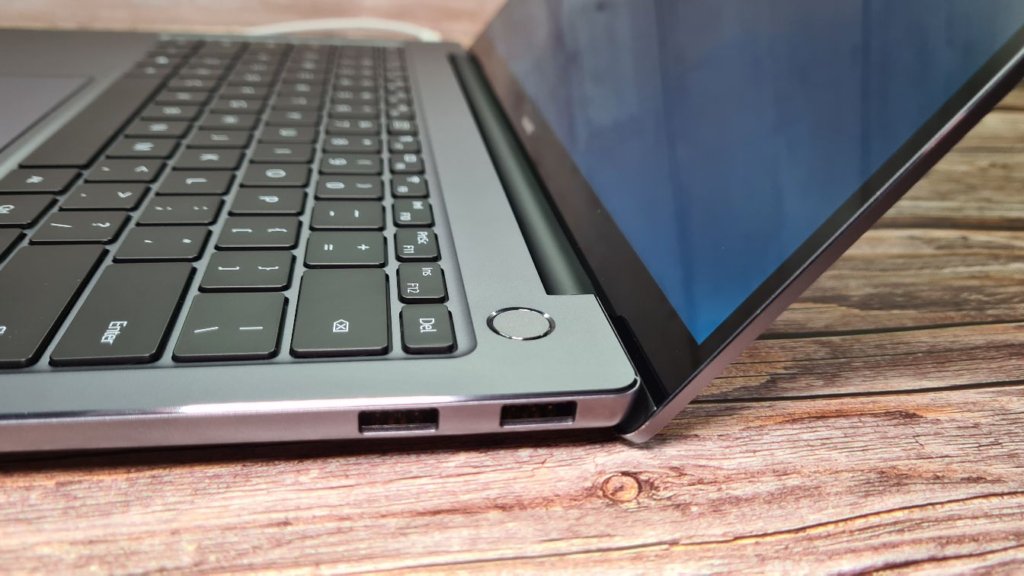 The right side has a pair of USB-A 3.2 Gen 1 ports while the left has a USB Type-C, a HDMI port and a 3.5mm combo jack. The laptop itself relies on the USB Type-C port for charging duties which means that the bundled charger has extra versatility for charging your smartphone. 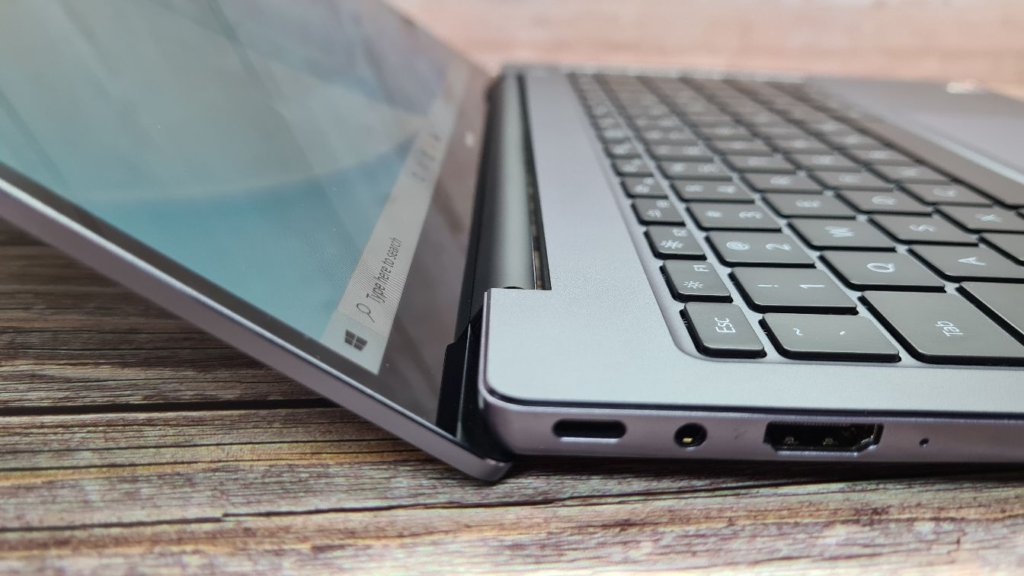 Flip the lid open and you’re greeted by a 14-inch 2K resolution touchscreen with a 3:2 aspect ratio that’s taller than the usual 16:9 aspect ratio laptops. Rather than plonk the customary webcam on the top of the display, the MateBook 14 embeds the webcam in a spring-loaded button on the keyboard itself.

It pops up only on demand for video calls and while detractors may deride it as being the ‘nosecam’ on account of its angle, there’s no denying the fact that it scores points for privacy-conscious pundits. The touchscreen itself is also of note as it has 100% sRGB colour gamut for faithful colour reproduction.

The MateBook 14 2020’s hinges are fairly standard with the ability to allow the display to bend almost all the way back and are fortunately quite sturdy with the ability to keep the display steady while using the touchscreen though they are understandably a bit stiff which precludes you attempting to open the laptop one-handed. You’ll need to pop the laptop open with both hands. 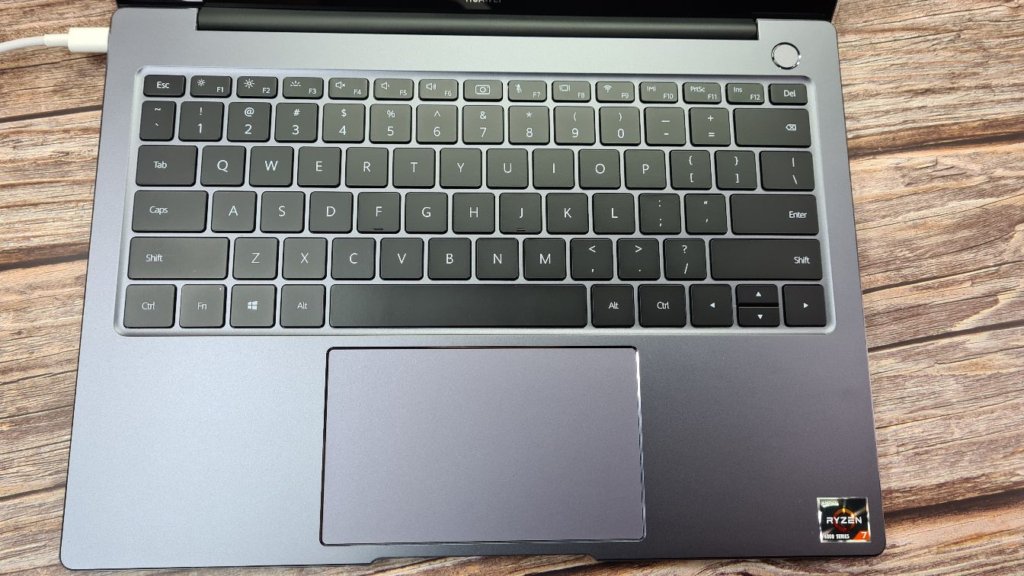 Bar the addition of the pop-up webcam, the keyboard layout is otherwise fairly standard with function keys up top and a standard QWERTY layout. The touchpad is generously sized and has an NFC sensor embedded in it which works with their Huawei Share feature which allows users to use their Multi-screen collaboration mode to pair up a Huawei phone with their laptop.

Another notable feature of note with the keyboard layout is the addition of a power button that also doubles as a fingerprint reader to unlock the MateBook 14 2020.

The SSD is partitioned by default into a 128GB primary drive with Windows 10 installed while the remaining storage is partitioned as a separate drive. The RAM is soldered in though you can swap out the SSD for a larger one if you happen to have a torx screwdriver handy. 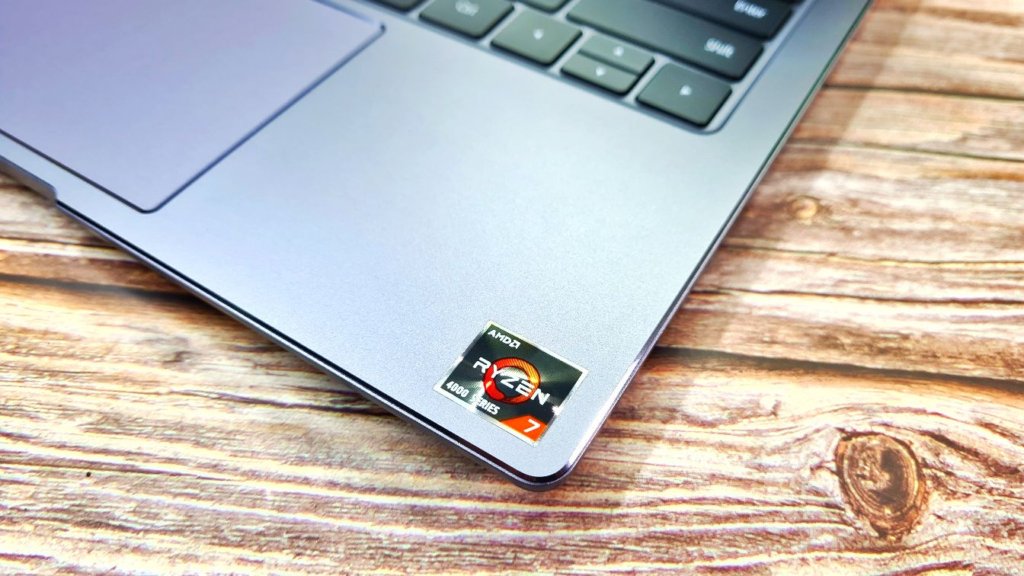 The AMD Ryzen 7 4800H processor is of recent vintage built on a 7nm process with 8 cores, 16 threads and a clock speed of 2.9GHz that can be boosted to 4.3GHz. One thing to note is that it lacks a dedicated graphics card and instead relies on internal AMD Radeon graphics which is analogous to Intel’s own Intel HD graphics for their own processors. Here’s the exact hardware it has under the hood…

The laptop runs Windows 10 Home with several Huawei specific embellishments such as their own wallpaper, an offline help guide and their own Huawei PC Manager – a combined notification center that acts as an alternative means to see what’s on your clipboard, recently used documents, check for critical updates and messages in one easy tab.

In terms of performance, our MateBook 14 2020 with an AMD Ryzen 7 4800H has more than enough pixel crunching grunt to handle general computing tasks. It handled over two dozen open browsers in Chrome without keeling over, was able to comfortably handle spreadsheets and Word documents on Open Office and photo editing on GIMP. While it’s not intended for video editing, you can cobble together 1080P video and render it without too much trouble though going through transition intensive timelines can be a chore.

It’s also able to handle some measure of simple gaming as well with Saints Row 3 running at native resolution at Medium settings at a smooth frame rate and turn-based game Battletech as well as Shadowrun Hong Kong without too much trouble but it is ill suited for more demanding tasks like tackling the latest flagship games at playable frame rates and heavy video editing is a choppy chore. Within its intended mission profile, the MateBook 14 2020 is a solid performer. This was borne out in the synthetic benchmarks where it scored the following:

Belying the slim form factor, the cooling solution of the MateBook 14 2020 proves to be surprisingly capable with the twin dual cooling fans at the base of the notebook helping to vent most of the heat when the laptop is in use. Under heavy loads, the laptop does get rather warm at the base but it’s also relatively silent as well; a testament to their engineering.

The display is able to deliver punchy colours and pin-sharp detail with good brightness though the reflective finish means that outdoors use would be irksome at best. 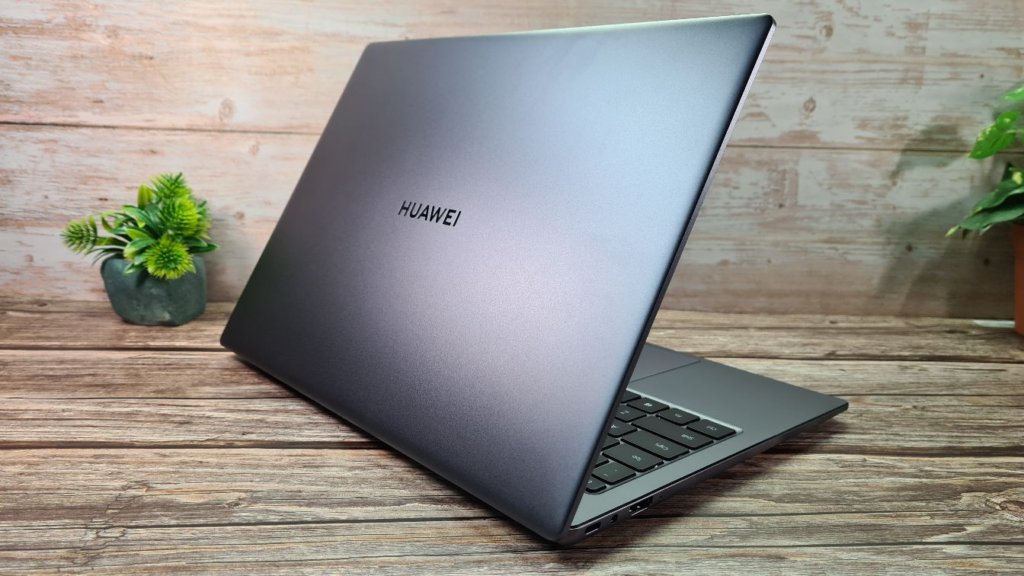 One interesting quirk is that its 3:2 aspect ratio display makes the monitor ideal for putting two browser windows or documents side by side onscreen though this does not work in its favour when watching movies with many ending up with some letterboxing on account of the aspect ratio though it’s not a deal breaker and for paperwork crunchers, it’s a more appropriate aspect ratio for work.

The pair of downward firing 2W speakers proved to be surprisingly capable as laptop speakers go with the ability to kick fair amounts of volume enough to fill a small room and enough detail for casual Spotify use and the odd Netflix binge or two.

A good keyboard can make or break a user experience and the MateBook 14 fortunately doesn’t disappoint with excellent spacing and good key travel that makes touch typing a doddle while the backlighting allows for use under dim light conditions. 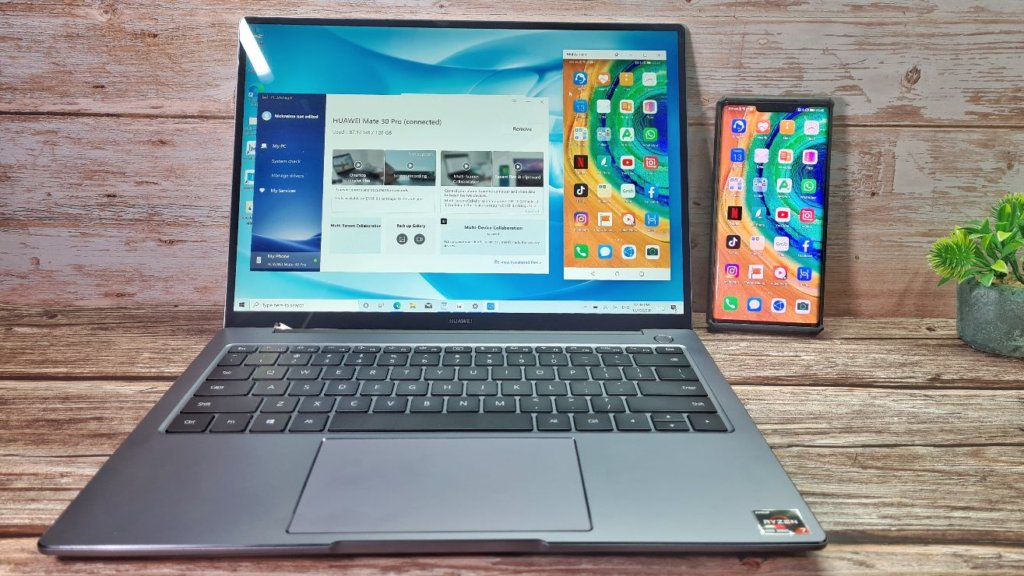 One particular feature of note with the MateBook 14 is its inclusion of Huawei Share which allows for added functionality with a paired Huawei smartphone running EMUI 10 and up with an NFC chip.

An NFC sensor embedded in the MateBook 14’s  touchpad allows a compatible Huawei phone like the P40 series to pair up with the laptop and share files as well as project a real time instance of your phone, allowing you to control it remotely on the MateBook 14’s display.

Battery life is fair seeing the MateBook 14 2020’s beefy processor and capabilities along with the decent size of its 56WH battery.

Set on performance mode, with near maximum brightness, and streaming Full HD video with WiFi on and heavy web browsing and paperwork, it averaged about 5 hours or so of usage.

On a more modest balanced work profile, 50% brightness and with purely paperwork and WiFi on, it managed to last just about 8 hours or so. Charging the laptop is a swift affair with the provided charger and from dead zero it managed to get a full charge in an hour and 30 minutes.

The Huawei MateBook 14 hits a delightful sweet spot in terms of pricing and performance, offering a delightfully vibrant and responsive 14-inch touchscreen, solid performance and a compact form factor.

Perhaps the only quibble here is that the laptops Huawei Share mode is only usable with other Huawei phones but that’s an understandable limitation. If you’re looking for a high-performing sub-RM4,400 ultrabook, this comes highly recommended. 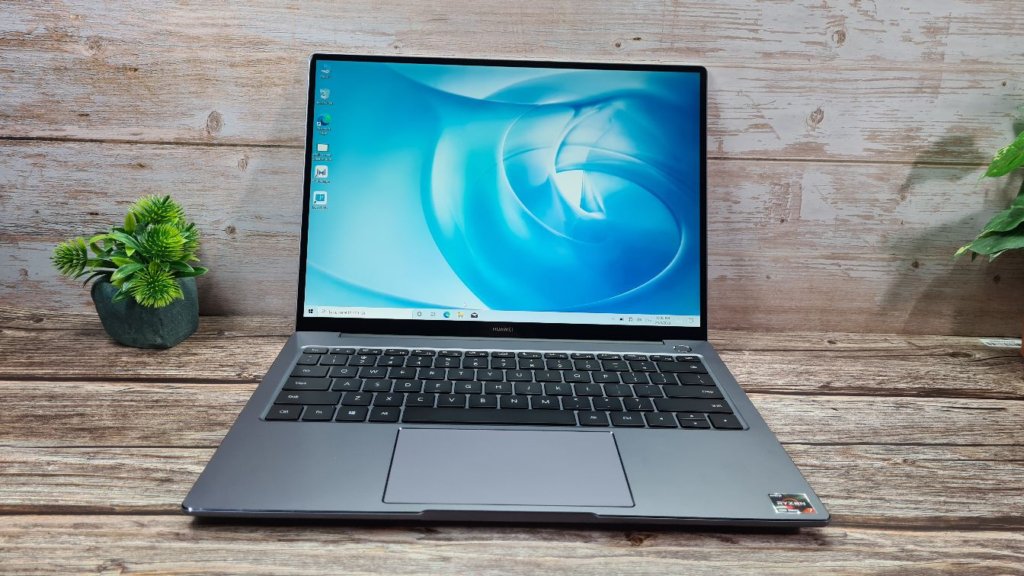 What we liked Crisp and responsive 2K touchscreen, diverse port selection, good performance for price, excellent keyboard
What we didn’t Needs more USB-C ports, no SD card reader, multi-screen collaboration only works with Huawei phones
We say The Huawei MateBook 14 with AMD Ryzen 4000-H series CPUs hits all the high points of what a desirable ultrabook ought to be with an excellent touchscreen and an excellent price to performance ratio. Those seeking a sub-RM4,400 ultrabook should put this at the top of their wishlist.

The Huawei MateBook 14 with AMD Ryzen 4000-H series CPUs hits all the high points of what a desirable ultrabook ought to be with an excellent touchscreen and an excellent price to performance ratio. Those seeking a sub-RM4,400 ultrabook should put this at the top of their wishlist.