Like any grizzled urbanite stuck in the middle of downtown Kuala Lumpur doing the daily grind, you’re familiar with the mainstays that get you from point A to B across town short of driving your own car: your best bud who happens to own a car, a cab, Uber or Grab. The first option is highly situational and dependent on how liberal you are in plying him with post-lunch coffee and post-Friday, pre-weekend margaritas. The other options are more straightforward.

The interesting question is – which option is cheaper? For the best bud option, the pricing is highly variable depending on their mood with a rough day often resulting in a form of ‘surge’ pricing resulting in a far higher ratio of drinks compared to distance. That option aside, the other three – cabs, Uber and Grab – are an interesting choice to ponder.

Taxis are traditionally the priciest option but often the most convenient one at hand – assuming there is a taxi within earshot who doesn’t attempt to price gouge you with an astronomical sum. The other two options – Uber and Grab – are extremely competitive propositions with both coming up with a host of promotions to win hearts and minds.

While the average city dweller doesn’t exactly have the time to crunch the numbers, top price comparison site iPrice has done so on our behalf and revealed some rather interesting figures, which are on the provided infographic below and which also encompasses several other countries in Southeast Asia. According to iPrice, the fares they crunched don’t involve extraneous mechanics like Uber’s infamous Surge pricing or discount/referral voucher mechanics, and relied on overall fare and its various price components (flagfall, distance travelled and cost over time) so it’s a straight on metaphorical apple for apple scenario. What iPrice found was that: 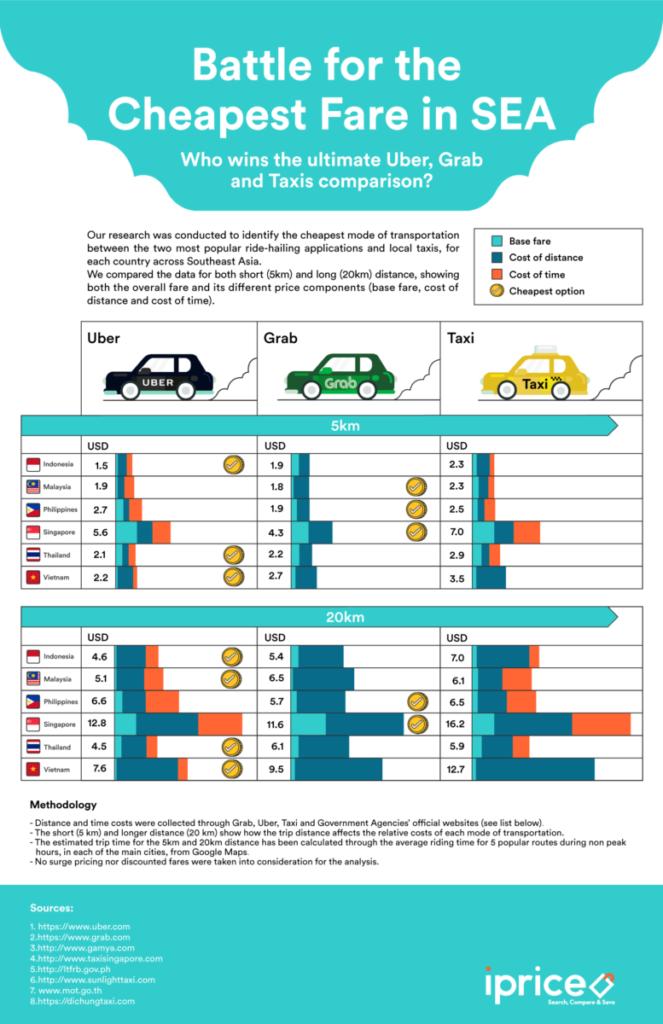 Infographic: iPrice. Click the image to get the full-sized infographic