Lenovo Malaysia has rolled out the new ThinkBook 14 and ThinkBook 15 as part of their Transforming Workplace initiative in order to offer the new generation of mobile worker a lighter, more flexible yet powerful notebook with all the performance and security features that is the hallmark of a ThinkBook notebook.


The ThinkBook 14 and ThinkBook 15 are both intended for SMEs and corporate enterprises with a variety of configurations that typically come with 10th Gen Intel Core processors, Windows 10 Pro, WiFi 6 support, PCIe SSDs and DDR4 RAM.

The notebooks also feature a sliding shutter for the webcam called the ThinkShutter. There is also a Hidden Port that allows for long-term docking in smaller dongles for wireless mouse devices and the like. 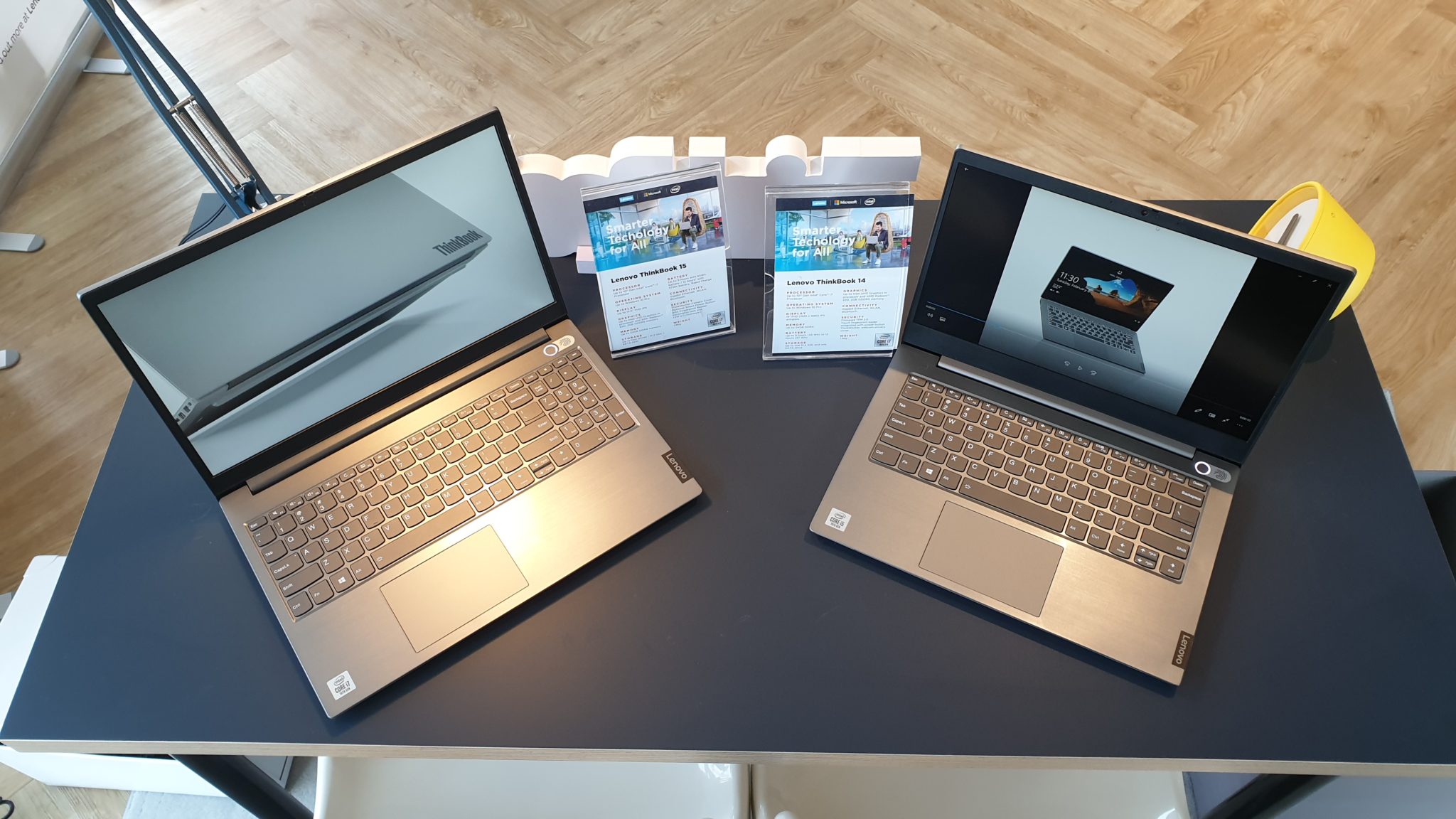 The Lenovo ThinkBook 15 can be equipped with up to 15.6-inch FHD IPS display, up to a 10th Gen Intel Core i7 processor, up to 24GB DDR4 RAM, either internal Intel UHD Graphics or an AMD Radeon 620 with 2GB GDDR5 memory, up to an M.2 SSD and SATA HDD and is rated for up to 9 hours of battery life. 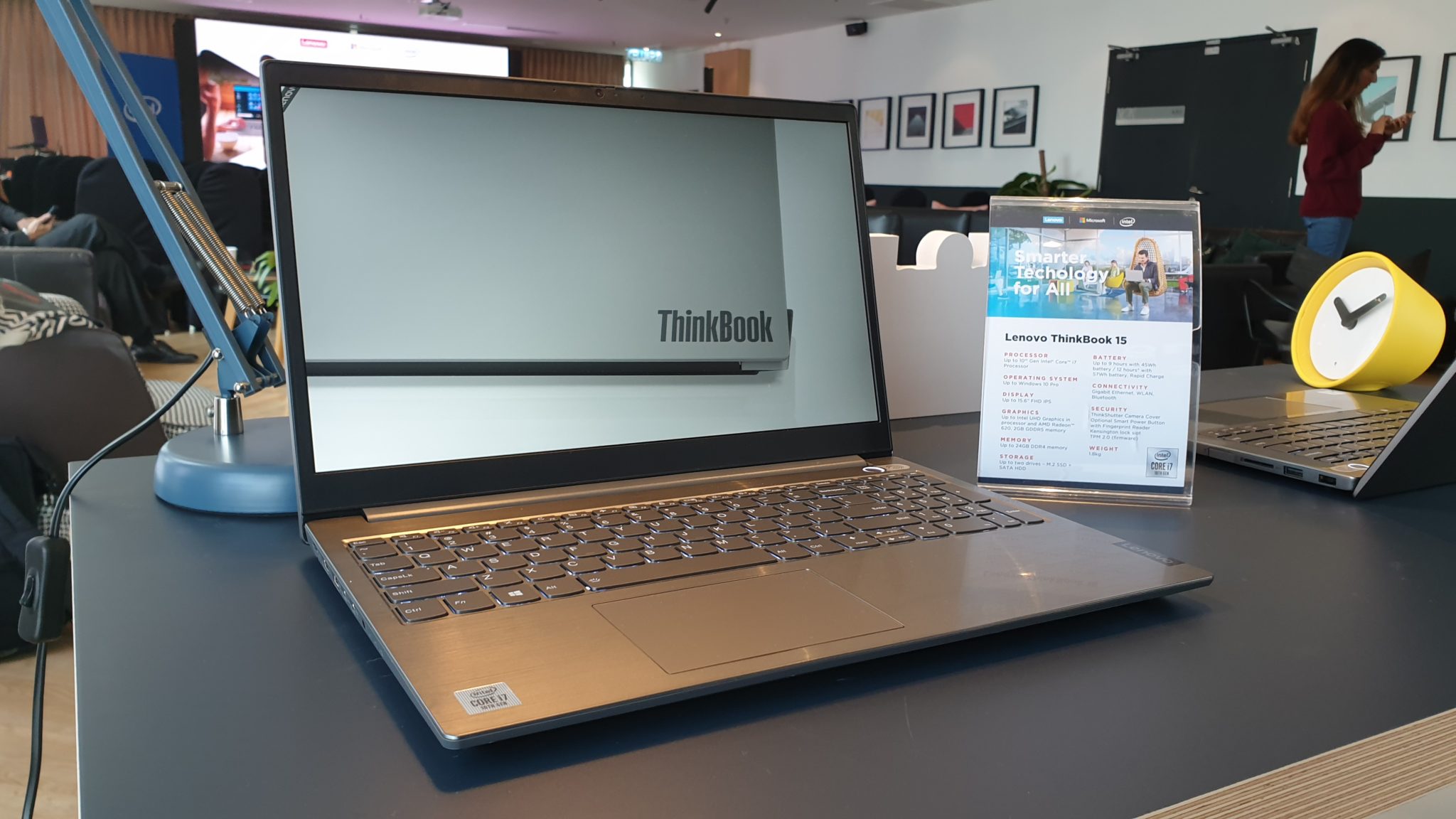 The Lenovo ThinkBook 14 can be configured with up to a 14-inch FHD IPS display, up to a 10th Gen Intel Core i7 processor and a similar configuration as the ThinkBook 15 with up to 24GB DDR4 RAM, up to an AMD Radeon 62- with 2GB GDDR5 GPU, up to one M.2 SSD and one SATA drive as well as 9 hours of battery life. 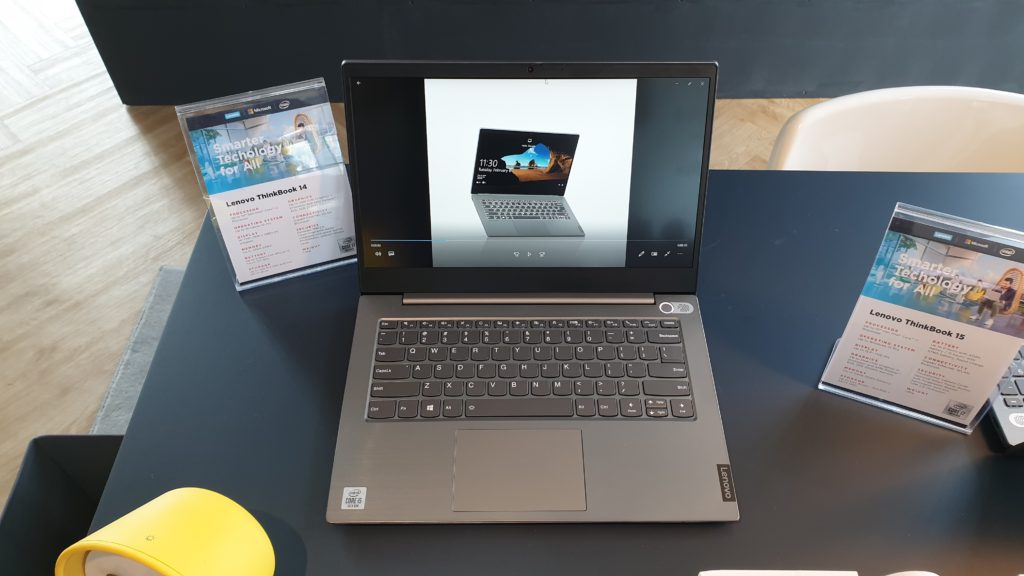 Also launched is the exceptionally compact ThinkCentre M90n-1 Nano series commercial desktop that’s smaller than a paperback and weighs just 505g. According to Lenovo, it’s the world’s smallest commercial desktop which is quite a feat. It’s small enough to comfortably fit behind a monitor and has a respectable set of specifications for general duty work. 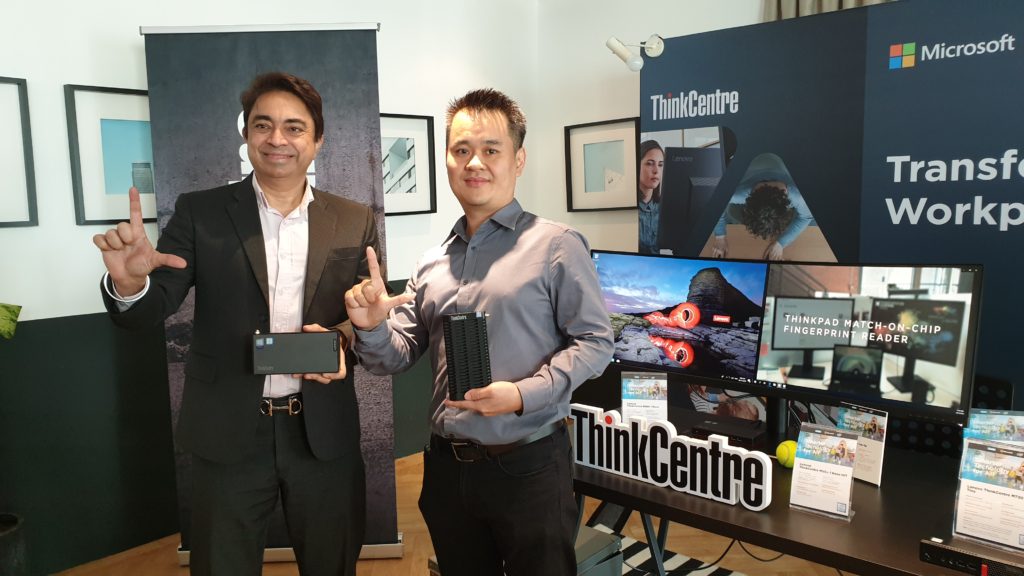 You get up to an 8th Generation Intel Core vPro i7 processor, SSD storage, up to 16GB DDR4 RAM and up to two M.2 SSD slots. Power can be handled by hooking it up to a USB Type-C monitor or a Type-C dock. 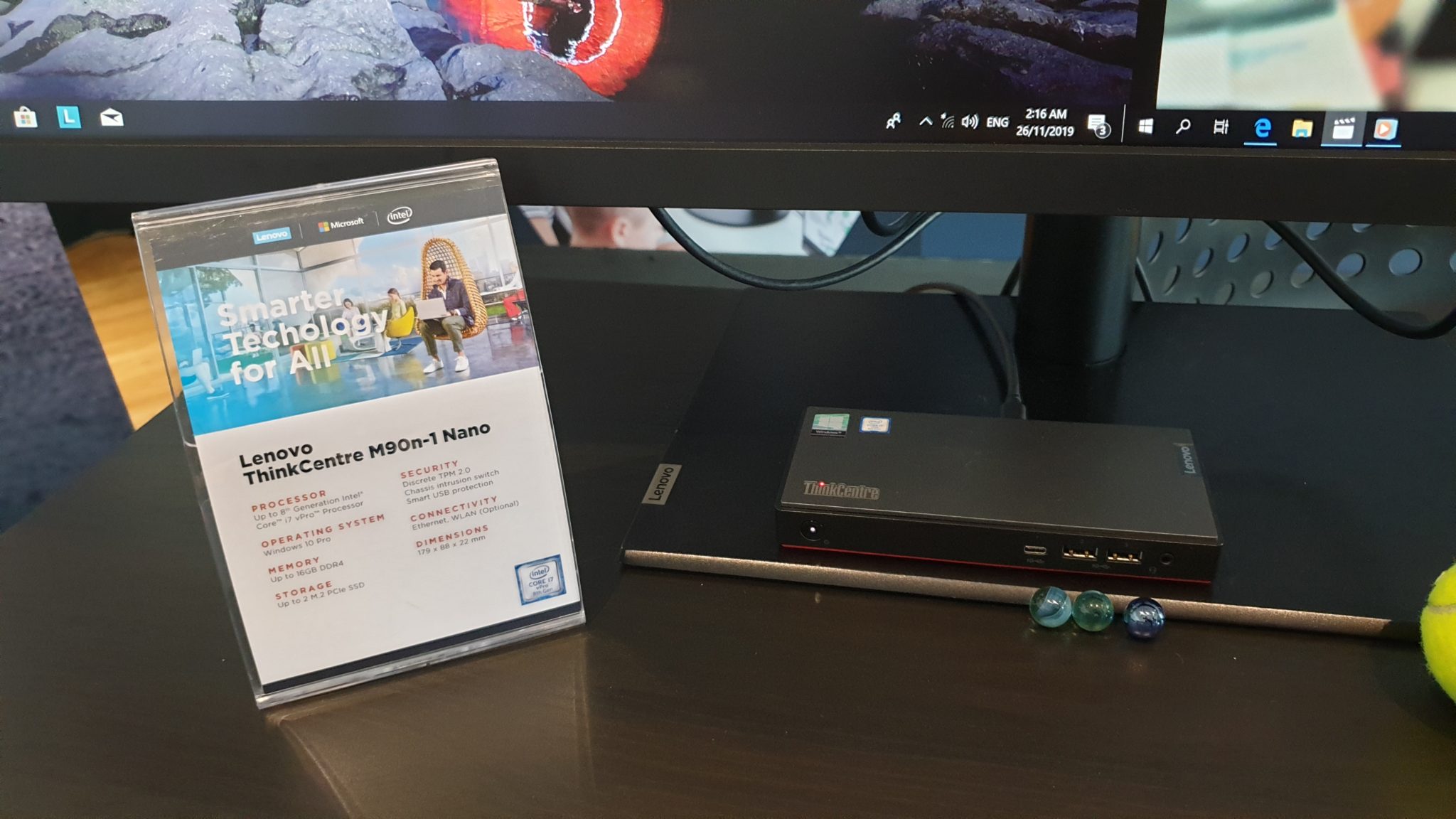 Another variant exists dubbed the ThinkCentre M90n-1 Nano IoT that has been designed for manufacturing, retail, healthcare and other IoT centric industries. It can be configurated with up to an 8th Gen Intel Core i3-8145U CPU, up to 4GB DDR4 RAM and up to two M.2 PCIe SSDs. Of note is the inclusion of a hefty heatsink to ensure it can work in temperatures between 0-50°C which is necessary for manufacturing environments. 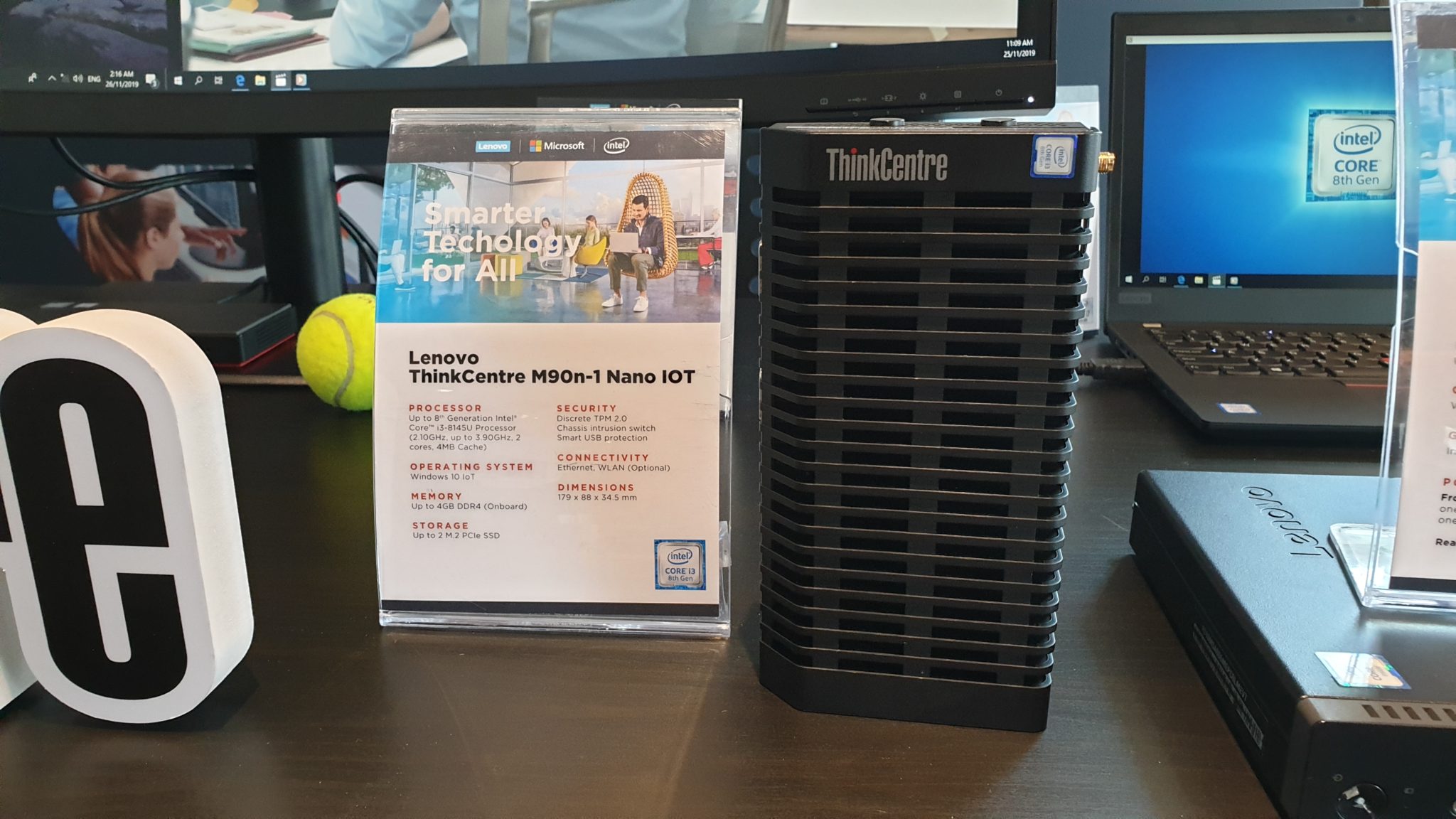