Sometimes you’re stuck in places you don’t want to be. Sometimes you want your mind to be somewhere else. Imagine being stuck in a plane while a horde of kids scream their way up and down the gangway like banshees from the depths of perdition. Not fun. But it’s all right, really as we couldn’t hear a darned thing at all thanks to the latest offering from Klipsch’s foundries as it offers truly amazing comfort and audio quality in an ultra compact form factor . Enter the Klipsch T5 True Wireless earbuds.

As the company’s first fully wireless earbuds, there’s a certain amount of heady expectation as to their capabilities in view of their other offerings thus far. It certainly has a high bar to achieve and in that regard, Klipsch have knocked things out of the ballpark with their T5 True Wireless earbuds in almost every aspect of its design and performance after we put it through the wringer.

First glimpsed at CES 2019, Klipsch’s earbuds made their global debut in Singapore a few days ago alongside other examples in the T5 series of headphones and is the distilled sum effort of all their audio engineering prowess and knowledge shoehorned into one magnificently hewn and compact form factor. 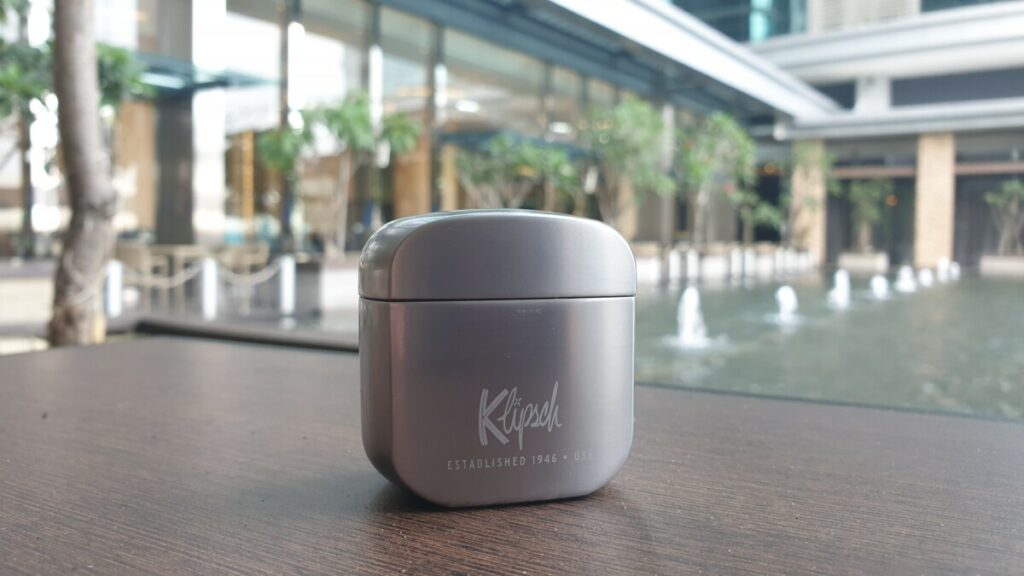 Externally, the Klipsch T5 True Wireless comes in a sturdy burnished metal casing that bears an incredibly close resemblance to a Zippo lighter albeit one that’s on the chunky side of things. When laid side by side with a normal Zippo lighter, the T5 is almost double its girth though the biggest giveaway that it isn’t meant to light up a stogie  is the fact that the Klipsch logo is engraved on the side along with the USB Type-C port on its flank to charge the case and the earbuds within it. 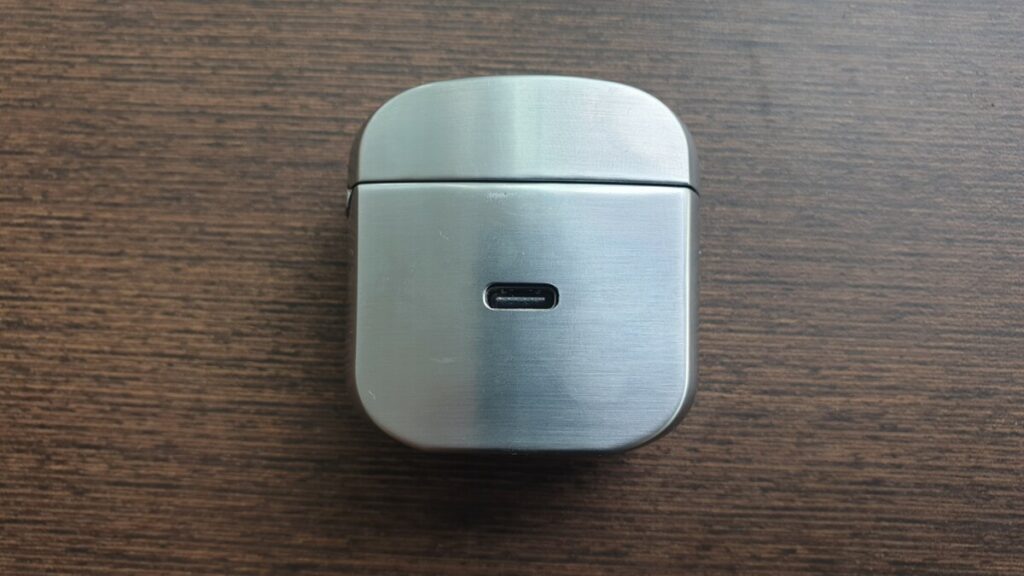 When held, the case itself has a significant heft and feel to it that gives a really premium feel.  Flipping it open and closed is a satisfying affair with a weighty clink whenever you do so with all the addictive tactility of a fidget spinner. Despite its weight and modest girth, it’s still compact enough to fit into most pockets.

Rather than being a homage to the ubiquitous lighter, the Klipsch T5 True Wireless has a number of subtle features that prioritise both form and function in equal measure. The flip-top is magnetically latched and only a hard jerk or a deliberate motion opens the case to prevent any mishaps. The earpieces are also magnetically attached to the charging case itself so that they don’t fall out by accident. 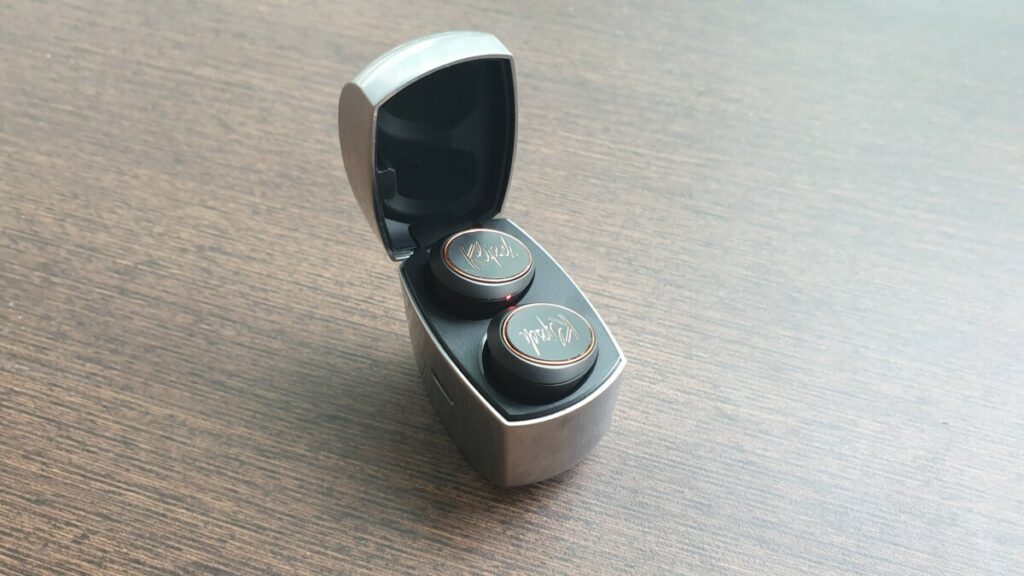 While the charging case is made of metal, the earpieces themselves are an amalgam of metal and plastic with swappable soft silicone oval-shaped eartips that neatly fit into your ear canal.

Each earpiece is done up in a matte black plastic with the Klipsch logo embossed with copper accents on the business end which acts as a control surface with a combination of taps allowing you to make and take calls as well as control playback on the T5 True Wireless. Of note is that the earpieces are rated IPX4 which makes them splash resistant to sweat and the odd April shower or two.

Out of the box, Klipsch has bundled the T5 True Wireless’ charging case, two earpieces with one for your left and right ear, a USB Type-C charging cable, a user manual and an alternative pair of smaller and larger eartips in order to provide a better fit. By default, the T5 comes with the medium sized eartips attached. 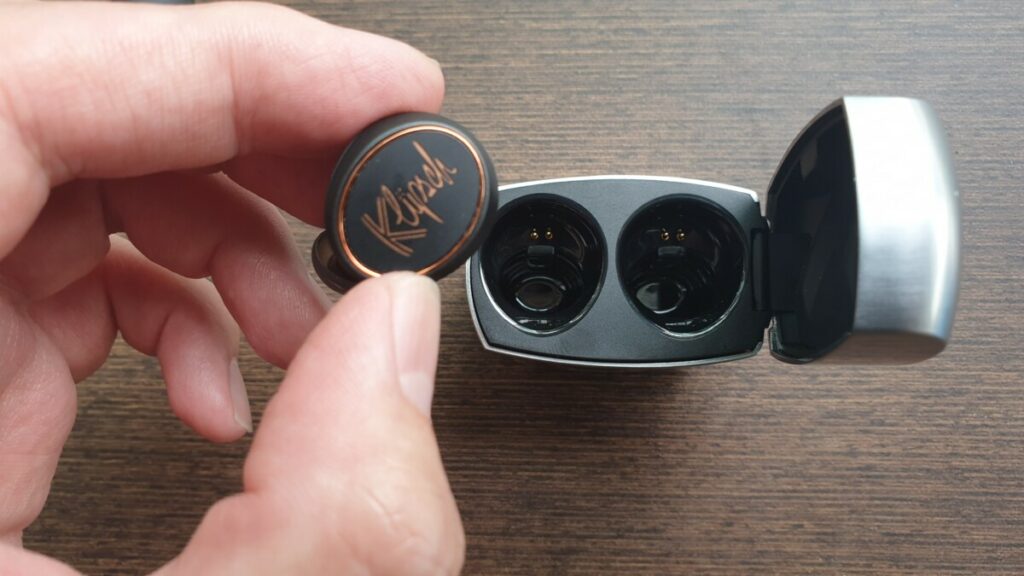 Taking the time to ensure a proper fit is necessary for best results as it ensures excellent passive noise insulation and in turn better audio quality as well as helping it to stay securely in your ears during vigorous workouts as the Klipsch T5 True Wireless lacks earfins or earhooks in its design. Even with a vigorous jog on a treadmill and extensive walking around town, the T5 managed to stay securely in our ears. 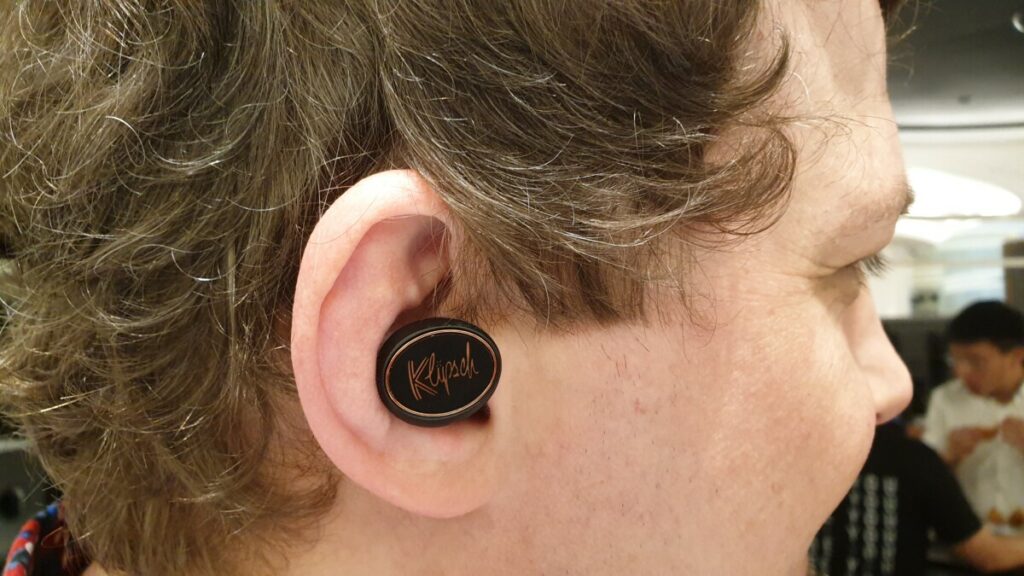 Once that is sorted out, it’s simply a matter of juicing up the T5 True Wireless via a normal USB charger which took a couple of hours to ensure that the charger and its attendant earpieces all had a full allotment of power.

Unlike other competing brands, the T5 True Wireless doesn’t come paired with its own app for now so it’s dependent on the existing equaliser settings off your streaming device. According to Klipsch, they’re coming out with a Klipsch Connect app for all their wired and wireless portable kit in the near future though they haven’t mentioned an exact date as yet.

Pairing it was a relatively simple matter and each earpiece can be used individually or in tandem together. When used alone, a single press plays and pauses your tracks while a long press brings up the voice assistant though you can’t change volume and instead have to resort to your existing smartphone volume controls.

When both earpieces are used together the left earpiece button summons the voice assistant with a press while a long press reduces volume and a double press skipping tracks backwards.

The right earpiece lets you play or pause tracks, increase volume with a long press and skip tracks forward with a double press. It’s simple but effective but it does take a bit of time to save it to your muscle memory. At present, there’s no way to customise what the various taps do but that’s not a deal breaker.

Once all the formalities of getting it to fit properly to your ears have been dealt with, the Klipsch T5 True Wireless essentially lets you block the hubbub of the world away with a screen of sound. Assuming you’ve fitted it properly, the silicone eartips act as a seal that provides superior passive sound insulation and in our case was able to mute a good deal of external background noise. 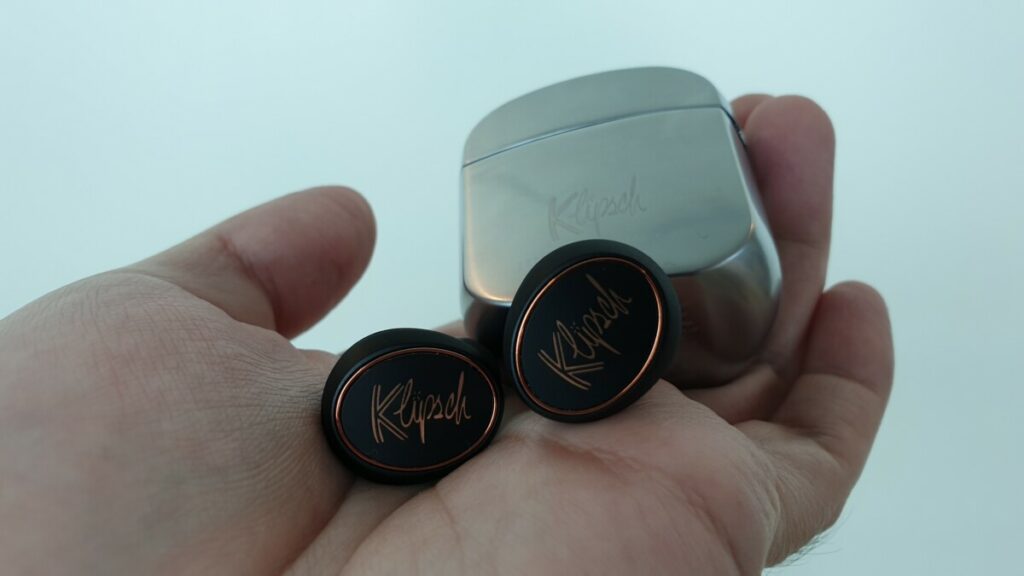 For field testing we paired it up to a Galaxy Note9 that was loaded with a playlist of MP3 and FLAC files across a variety of genres. In Orinoco Flow, the T5 True Wireless was able to tackle the lows, mids and highs of Enya’s complicated melody without faltering. Joanna Wang’s cover of Vincent which primarily consists of her strumming the guitar and her dulcet smooth voice served up excellent vocals.

We pitted Ramin Djawadi’s orchestral arrangement of Paint It Black for WestWorld which starts out low and slow but gradually adds in more and more of the orchestra in along with liberal lashings of a snare and bass drum before hitting a crescendo with everything firing off in unison.

The T5 was able to serve up a good sound stage with enough detail that even the subtler instruments in the arrangement were given space to shine. A test of Pink Floyd’s Time also rendered equally good results with a similarly good sound staging and excellent left and right track separation.

Just to throw it a curveball, we threw it Bear McCreary’s ‘Prelude to War’ which features complicated bass-heavy martial drum arrangements that escalate into a fast staccato beat that involves a battery of taiko drums.

Klipsch’s signature flat sound works best here with all the orchestral elements of the track given fair representation; a lesser pair of earbuds would have simply smashed on the bass and had everything else in the track appear in a more muted fashion.

The only downside here is that the bass isn’t as robust as we’d like it to be but on the bright side it proved to be a very pleasant listen without tiring you out prematurely, due in no small part to the exceptionally comfortable ear tips. 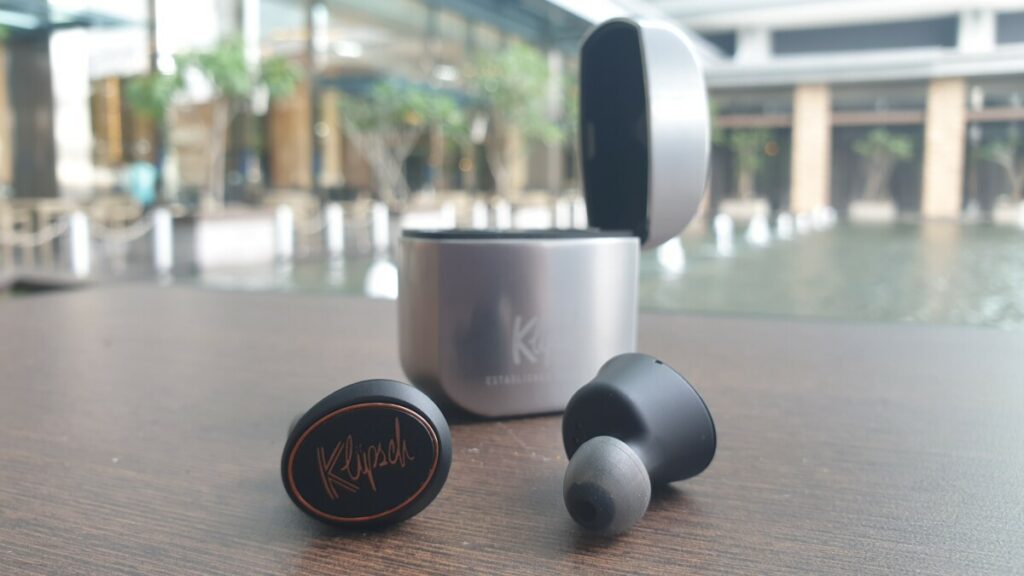 Bar the middling bass, the T5 True Wireless proved to be a very acoustically adept pair of buds that capably tackled everything thrown at it and then some with excellent detail and seriously good sound separation and staging.

Call quality on both sides was excellent even with us sitting smack dab in the middle of a busy downtown mall with a sale going on a couple of floors below us and significant background noise.

On paper the Klipsch T5 True Wireless is rated for 8 hours of battery life per earpiece with the charging case itself offering 24 hours of reserve power. This endurance isn’t a modest boast and our field test yielded endurance close to that figure with three hours of listening a day yielding a couple of days worth of tunes from the earpieces alone and the charging case allowing us to stretch that duration further with close to over a week of usage.

As it stands, the Klipsch T5 True Wireless doesn’t come cheap with a horde of contenders that are priced lower but which also have more plasticky build quality and less capable audio performance.

What you pay for however in the T5 is exceptional audio quality, outstanding battery life and superb comfort. Taken separately, these three attributes won’t merit its lofty price tag but the miracle here is that Klipsch has combined all these three things together, melding it into a beautifully hewn casing, that ultimately makes this one of the best wireless earbuds that we have ever listened to.

If your pockets run deep and you want quality, shelling out for the T5 True Wireless is a sound investment indeed that will serve you well with great audio performance, comfort and battery life for years to come. 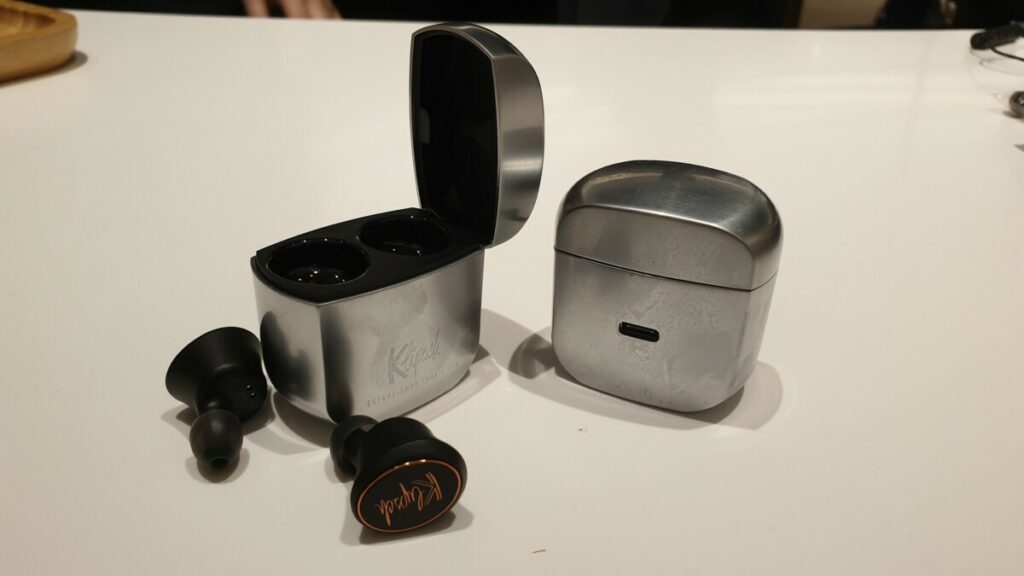 What we liked Amazing battery life, outstanding comfort, Excellent build quality, superb sound, uses USB Type-C port
What we didn’t Not cheap, only comes in one albeit very stylish colour, app to tweak equaliser settings not yet available
We say If you value comfortable earbud design, great battery life and excellent sound quality you will find the superbly engineered Klipsch T5 True Wireless earbuds your best bet towards sonic bliss. Truly one of the best wireless earbuds that money can buy.