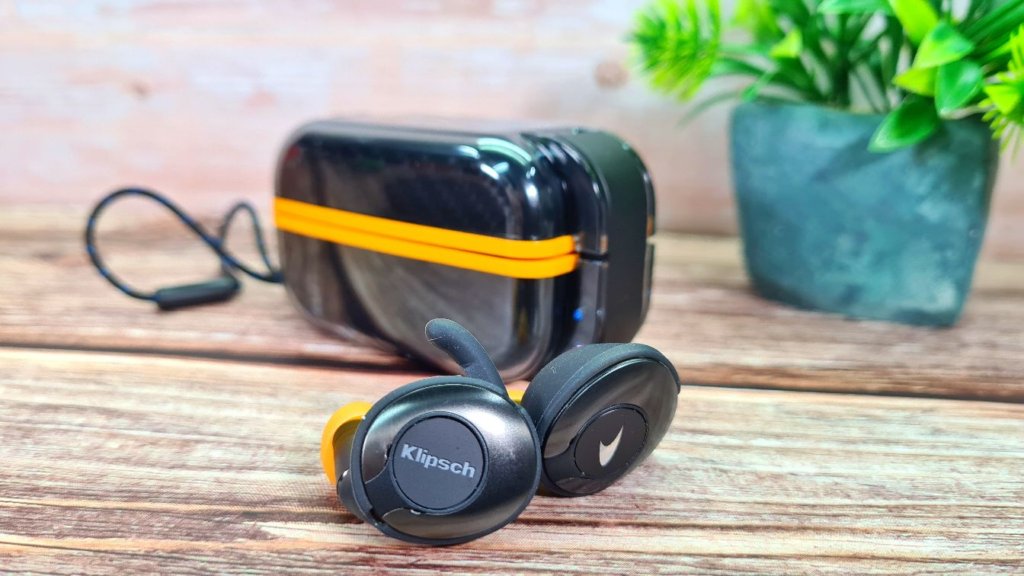 The wireless earbud market is enjoying a renaissance of late with a deluge of new offerings at all price ranges but the new Klipsch T5 II True Wireless Sport McLaren edition earbuds aims to outdo them all with a unique blend of features and performance along with McLaren’s signature livery thrown in for good measure. It has recently made the rounds in the Malaysia market and we managed to get a test unit for review. Here’s how it fares after we put it through its paces.

What is the Klipsch T5 II True Wireless McLaren edition

The most full featured of the new Klipsch T5 II True Wireless range, the Sport McLaren edition is essentially the T5 II True Wireless Sport earbuds done up in team McLaren’s signature black and burnt orange livery with the addition of a bundled 10W wireless charger thrown in for good measure. 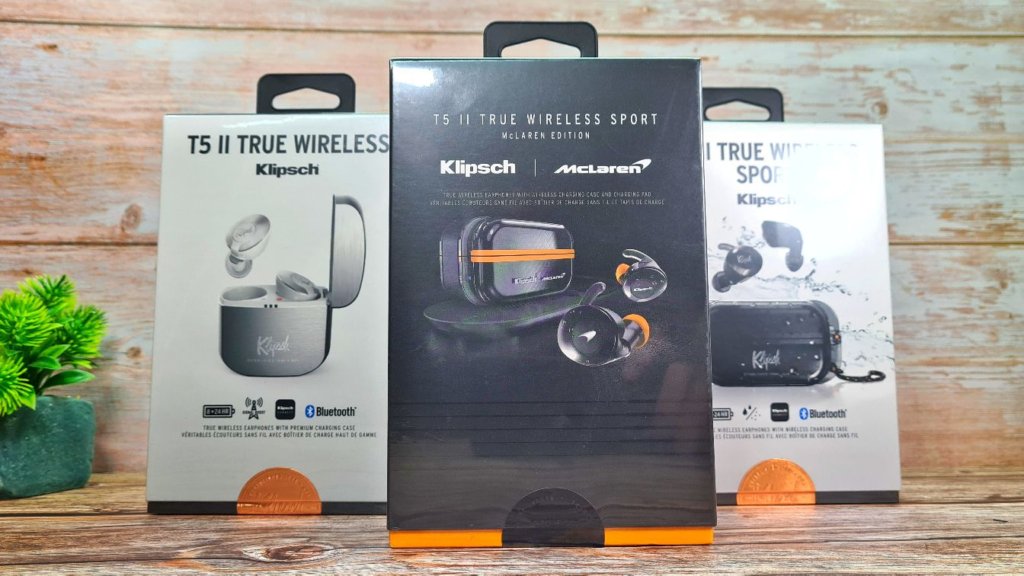 Unboxing the McLaren edition was quite an experience. Slice open the black security seal and you get an inner box done up in McLaren’s signature orange with each layer within it revealing an array of additional goodies.

You get the obligatory product literature that includes a quick start manual, a warranty card and, interestingly enough, a brochure that talks about the collaboration between McLaren and Klipsch

You also get a sturdy metal warranty card with your product serial number engraved in it for good measure. Just to add to the exclusivity, they also toss in a free set of Klipsch X McLaren stickers too on a transparent sheet.

In terms of the good stuff, you get the T5 II Sports edition charging case done up in McLaren colours along with its accompanying earbuds, a set of two additional ear wings with one already attached to the earbuds, five more differently sized ear tips and a pair of Comply foam ear tips. 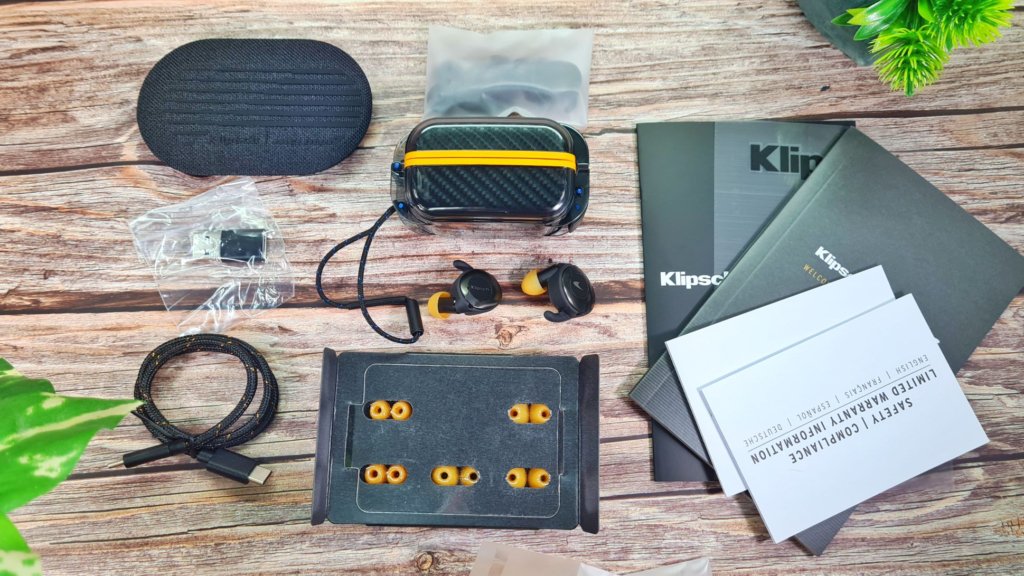 This is way more than many other competitors typically pack with their earbuds and offers the best chance of giving users the best fit possible when donning their earbuds. You also get a braided USB-C to USB-C charging cable, a wireless 20W charging pad and a USB-C to USB-A dongle. That’s quite a substantial load of freebies indeed. 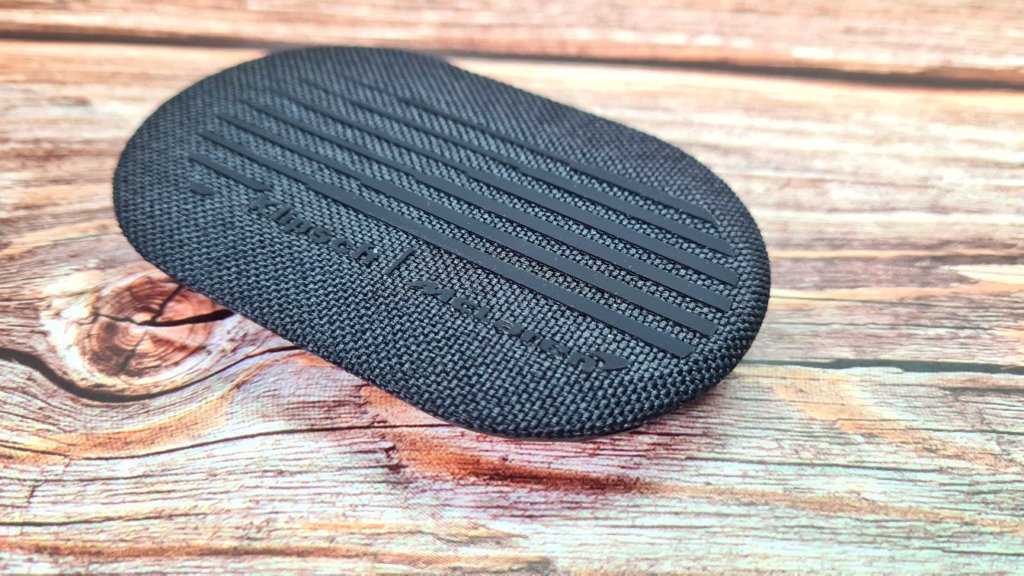 The biggest draw to the Klipsch T5 II True Wireless Sport, and by extension, the classed up McLaren edition that we’re testing is the fact that it is one of, if not the most robustly built wireless earbuds that we have ever seen in the market that also adds in an IP67 water resistance rating for good measure.

The  IP67 rating means you can potentially take this bad boy into 1 meter of freshwater for up to 30 minutes without any untoward effects. It is not however rated for use swimming so no dips in the pool with this on, folks. 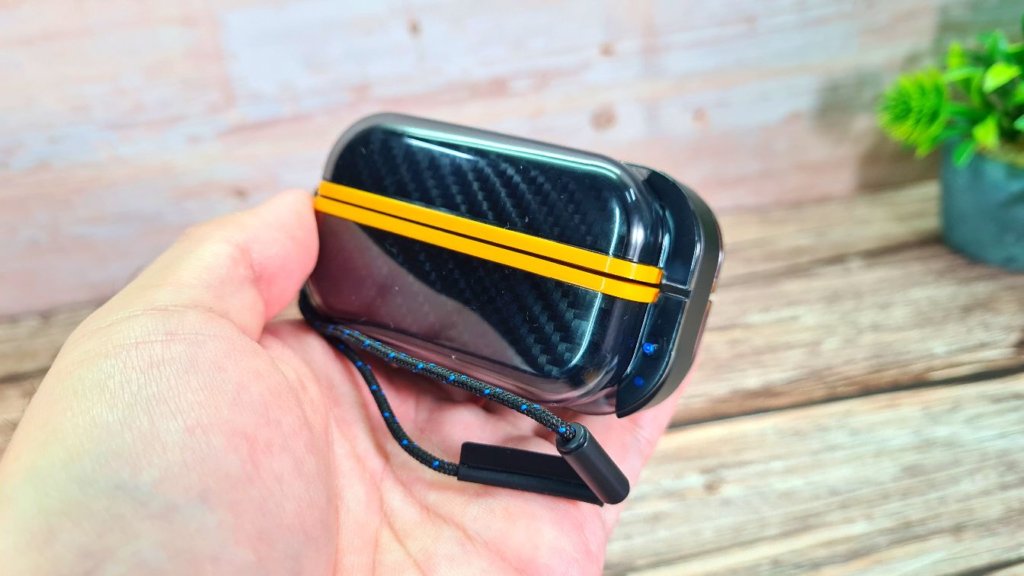 Primarily intended for outdoors use and, in our case, more butter fingered users, the Klipsch T5 II True Wireless Sport McLaren Edition earbuds are built tough with a casing that’s almost twice as thick and chunkier than the svelte dimensions of the T5II True Wireless.

The charging case itself is overengineered beyond anything else we’ve ever seen with a thick protective external casing made of polycarbonate that requires a hefty latch to securely snap it shut along with a rubber gasket lining the opening to retain its IP67 water resistance.

It’s also light and sturdy enough that it can survive a drop or two from waist height if it falls out of your pocket by accident; it’s also chunky enough that fitting it in said pants pockets will be a challenge too. In that regard, they’ve fitted it with a lanyard string so you can hook it up in your backpack or belt for easy access. 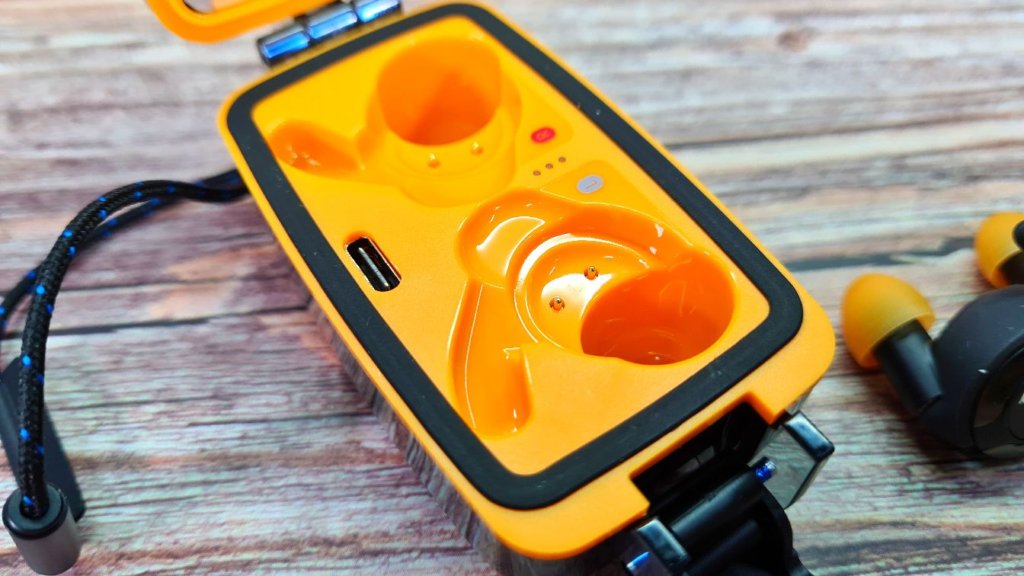 In order to retain its water resistance, the charging case also lacks any external charging ports. Instead, you have to pop the lid open as the USB Type-C charging port is nestled internally in between the two earbud bays.

Klipsch has also added another unique feature to the charging case – a removable cartridge of silica gel beads that is intended to wick moisture from the earbuds in case they’re damp. Unfortunately, the beads rattle quite a bit. In a noisy urban environment like a coffee shop or a plane they’re inaudible but in a quiet place like a library, the sound is fairly obvious. 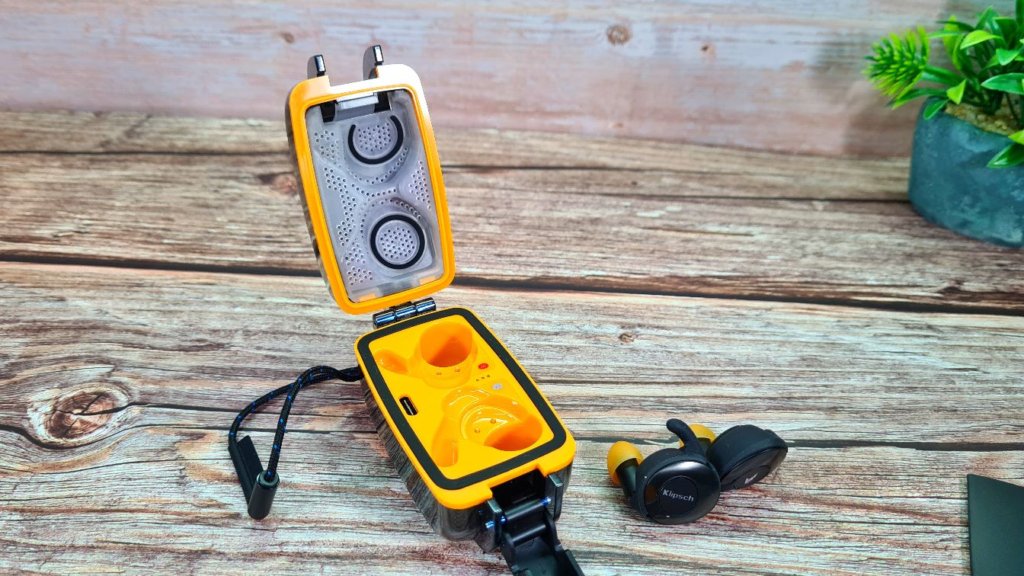 The earbuds are built around 5mm dynamic drivers with ear wings to keep them secure even with vigorous movement such as during a workout. This is accompanied by Klipsch’s renowned oval-shaped ear tips that are some of the most comfortable that we’ve ever used. With six differently sized ear tips and three differently sized ear wings, you’re able to customise the fit of the T5 II True Wireless Sport to an exceptionally high degree.

One important fact to note is that Klipsch has not integrated any active noise cancellation with the T5 II True Wireless Sport and like the first generation T5, relies on getting a good passive seal with the earbuds to deal with external noise. 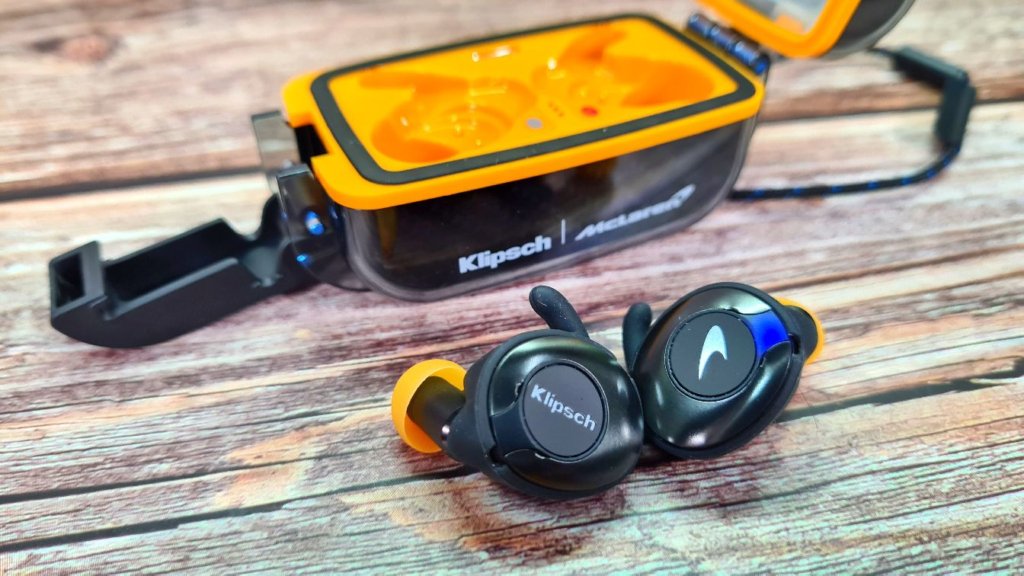 Each earbud also has a button rather than touch controls which offers more tactility and little chance of error. The left button shows the Klipsch logo while the McLaren logo is emblazoned on the right earbud. The normal T5 II True Wireless Sport lacks this distinctive iconography. Both buttons allow you to control music playback as well as make and take calls off a paired phone.

In terms of connectivity, the earbuds pair up to devices via Bluetooth 5.0 and support aptX, AAC and SBC codecs for high quality streamed audio. Battery life is rated for 8 hours of usage for the earbuds with an additional 3 full charges from the charging case for a grand total of 32 hours of usage which is quite an impressive figure indeed.

Getting the earbuds up and running was accomplished in a matter of minutes. It paired up with our test phone, a Galaxy S20+ in a matter of seconds. Like many top brand wireless earbuds, the Klipsch T5 II True Wireless has an accompanying app to go with it dubbed the Klipsch Connect app that’s free for download on iOS and the Google Play store.

You can’t customise what the buttons do with Klipsch Connect but you are able to tweak the equaliser settings to a significant degree beyond the standard Klipsch signature sound profile.

Getting the right fit for our ear canals took some time though as I was spoilt for choice but after several test runs, I ended up preferring a slightly smaller pair of silicone eartips for both ears.

This fit is critical to ensure that you get a good passive seal for better audio performance. With the eartips and ear wings in place, the earbuds did not so much as budge once they were placed in my ears even when I had to make a mad dash for the last train out of town. It’s more than sufficient to keep it secure for someone out for a jog or working out at the gym.

Comfort was exceptional, as expected of Klipsch, and even after half a day’s worth of usage from noon to dusk, I didn’t encounter the dreaded ear ache at all. With a proper seal, I was able to mute out a good dose of external ambient noise that made working in a bustling coffee shop an easy task.

One particular feature in the Klipsch T5 II True Wireless Sport is its transparency mode that lets in some measure of external sound. This comes in handy when you’re navigating pedestrian traffic outdoors. 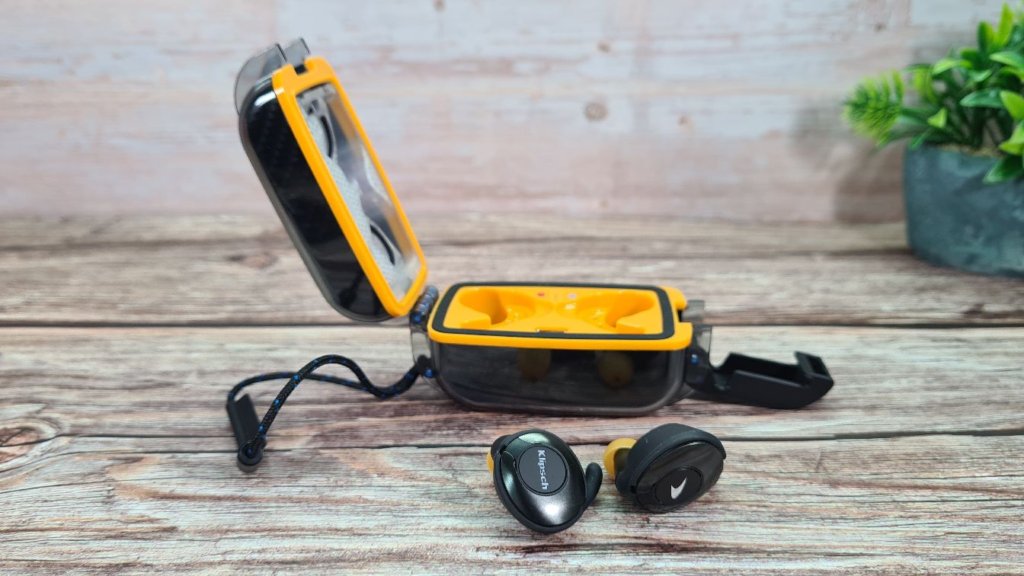 With the default equaliser profile which is relatively balanced selected on the Klipsch Connect app, the earbuds did not disappoint. While the initial concern over the lack of active noise cancellation was worrying, the comfy and excellent ear tips were able to address that effectively, much like its predecessor the original T5 True Wireless did. External noise save for the loudest rackets were squelched in an effective fashion via the good passive seal from the ear tips.

The 5mm dynamic drivers did not disappoint with good sound staging, a decent amount of bass and great detail across a variety of musical genres from classical to 80’s pop. Belinda Carlisle’s melancholic ‘Half the World’ was rendered with suitable gravitas and the guitar strumming and vocals were clear and distinct in ‘Hotel California’ by the Eagles. Even when dialled to near maximum, there was no distortion (don’t try this at home, kids). 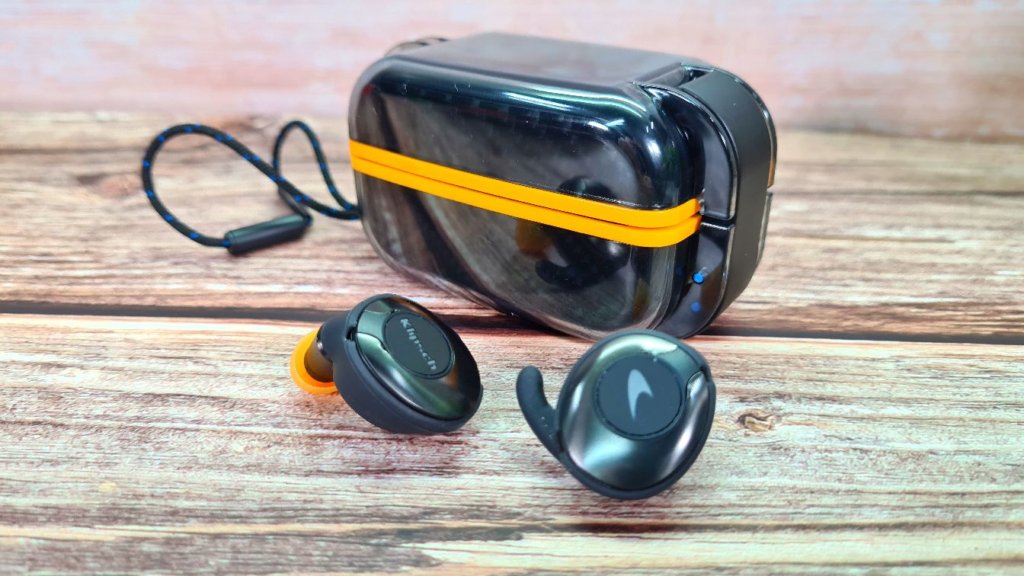 While it’s not intended for gaming nor is it meant for movies, the earbuds managed to tackle these tasks in a competent fashion. The sedate Genshin Impact’s pleasant background tracks and special effects in combat sounded rich while Star Trek: Discovery’s season 2 finale battle with its dialogue over a cacophony of explosions, klaxons and phaser fire still sounded distinct without muddling the various sounds getting muddled in the mix.

In terms of battery life, the Klipsch T5 II True Wireless delivers close to what it promises on the tin with 7 hours and 45 minutes of battery life with a combination of music, Netflix, gaming and a few voice calls.

With up to 32 hours of battery life in total with the charging case, you’re easily able to tote this around with you to keep you company on the daily commute and have it last a good week or so before needing a recharge. You’re also able to use either earbud on its own in case you need to keep an ear free.

The Klipsch T5 II True Wireless McLaren edition is a unique offering that blends exceptionally comfortable ear tips, great audio performance, excellent build quality and are one of the few true wireless earbuds in the market  with IP67 water resistance for both the earbuds and charging case.This is however tempered with the lack of active noise cancellation and a chunky casing that’s far too big to fit into all but the largest pockets.

While it is primarily intended for sportier, more outgoing users on account of its IP67 water resistance and over engineered durability, the Klipsch T5 II True Wireless Sport McLaren edition is nonetheless a great proposition for urban commuters and desk jockeys alike and for McLaren fans, it’s no brainer acquisition. 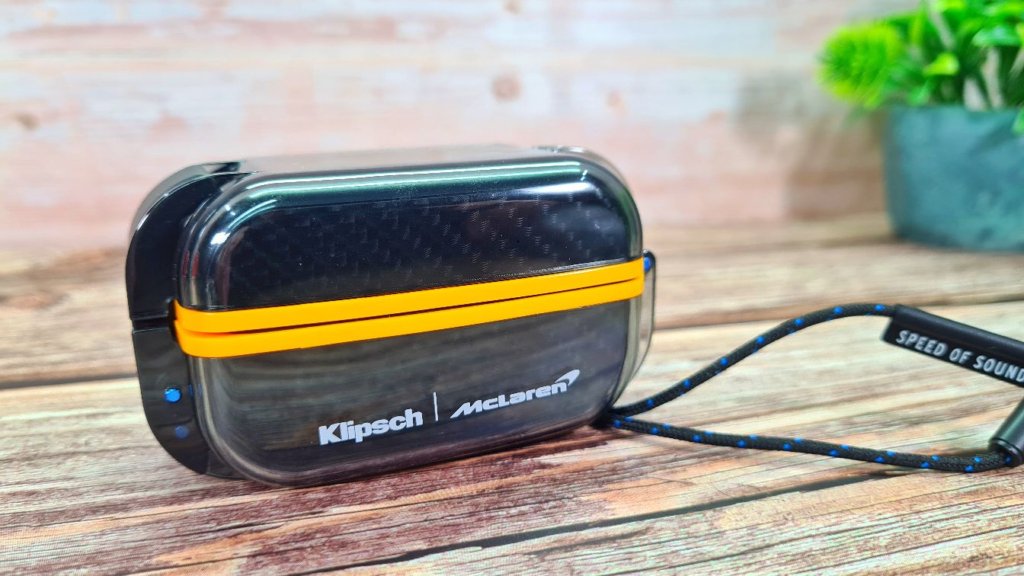 What we liked Incredibly comfortable ear tips, IP67 water resistant earbuds and charging case, wireless charging, excellent audio performance, outstanding battery life
What we didn’t Charging case is rather bulky, no active noise cancellation, slight rattling noise from the silica gel beads in the charging case
We say Big, bold, powerful and strikingly embellished with team Mclaren’s trademark orange trim, the Klipsch T5 II True Wireless Sport McLaren Edition is ideal for urban commuters and outdoor enthusiasts with its robust IP67 water resistance. Add in one of the most comfortable ear tip designs in the market with great audio performance and it takes a comfortable pole position lead for its price range.

Big, bold, powerful and strikingly embellished with team Mclaren’s trademark orange trim, the Klipsch T5 II True Wireless Sport McLaren Edition is ideal for urban commuters and outdoor enthusiasts with its robust IP67 water resistance. Add in one of the most comfortable ear tip designs in the market with great audio performance and it takes a comfortable pole position lead for its price range.