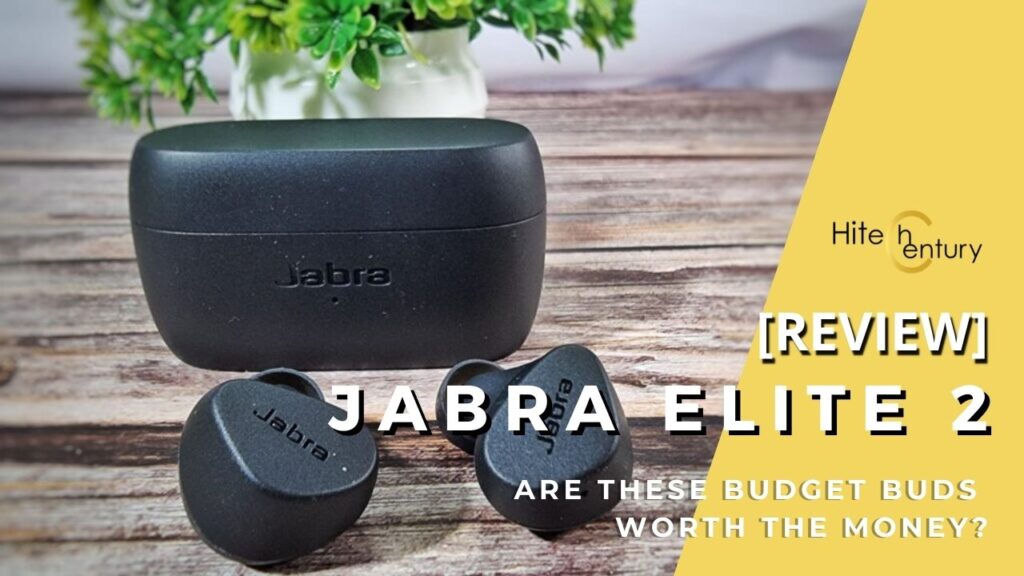 The Jabra Elite 2 are the cheapest pair of wireless earbuds in their latest Elite series range. It doesn’t get as much of the limelight as their flagship premium models like the  Elite 7 series , with limited distribution in certain countries for now  including Malaysia. but is it up to snuff? Here’s our Jabra Elite 2 review where we put it to the test! 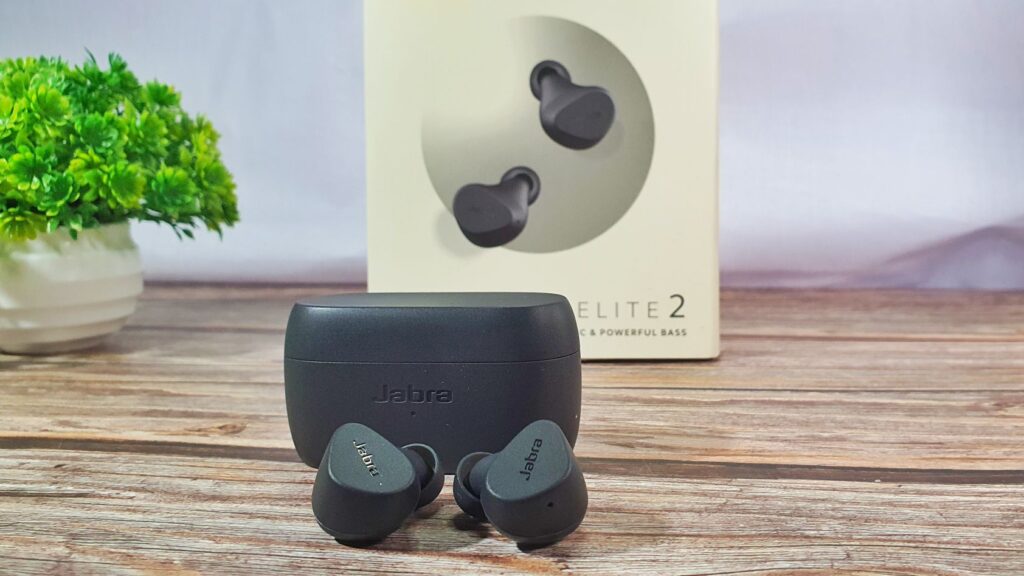 Intended as the more affordable version of the Elite 3, the Jabra Elite 2 nixes several features from the Elite 3 to trim the cost down to its present price point of RM299 versus the RM389 of the Elite 3 which represents an RM90 price difference.

The Jabra Elite 3 is more widely available in most parts of the world but the Elite 2 is seeing a more limited release in certain regions that include Malaysia.and other “select markets worldwide” though not in the United States.

Externally, the Jabra Elite 2 is almost aesthetically identical to the Jabra Elite 3 with most of the differences lying under the hood save that the Elite 3 has a tiny seam line running all around its control surface which the Elite 2 lacks. Both use 6mm drivers and work with the Sound+ app that grants access to the same sound equaliser presets.

The Jabra Elite 2 notably cuts a few corners with smaller batteries in the charging case, resulting in a maximum of 21 hours battery life versus 28 hours in the Elite 3 before running dry. 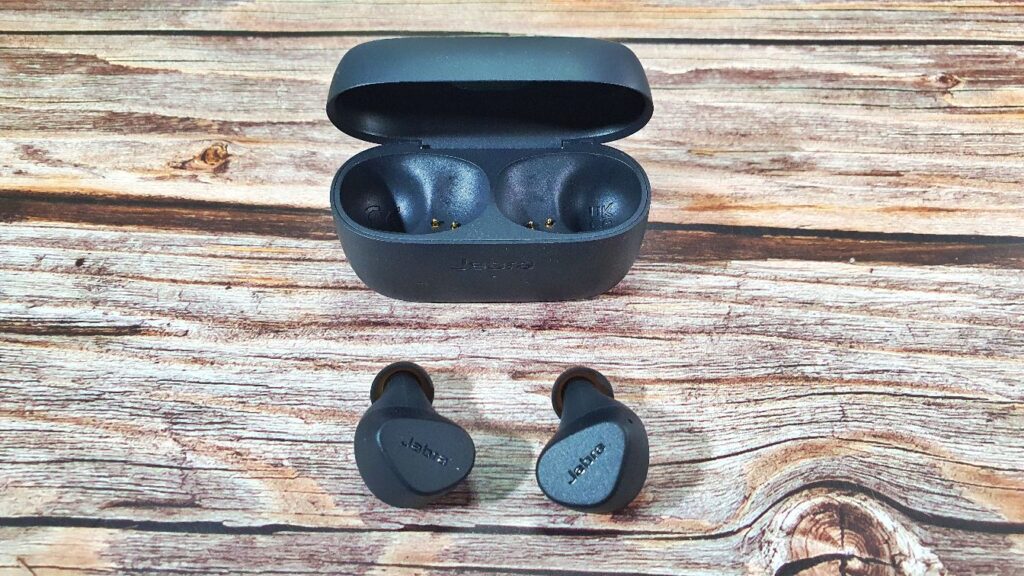 The Elite 2 also cuts voice quality down by featuring only one MEMs microphone per side for calls versus the two in the Elite 3. Another notable feature that’s pared down is that only the right earbud of the Elite 2 is usable in mono mode whereas both of the Elite 3’s earbuds can be used in mono mode independently of each other,

Much like the Elite 3, the Elite 2 lacks active noise cancellation and an ambient mode, making it solely reliant on passive noise insulation via the silicone ear tips to muffle external noise when in use.

On paper, the Jabra Elite 2 has the following specifications.

The design of the Jabra Elite 2 is almost identical to the Elite 3 with a tall, flat charging case that’s light, easily pocketable and which can be opened one-handed. The triangular-shaped earbuds each terminate in a silicone ear tip with most of the battery and circuitry housed in a bulbous housing that perches outside the ear canal.

Unlike the typical touch control surfaces in other earbuds that rely on finger taps and which are prone to accidental input errors, the Elite 2 has clicky control surfaces which require a deliberate press for it to work. The matte surface also makes it easy to remove from the case with a firm but sure pinching gesture.

There is also a subtle indicator light on the front of the charging case and on each earbud. Green indicates a high or full battery charge, yellow a medium charge and red indicates a low battery charge. If it glows blue, it’s pairing via Bluetooth while purple indicates a firmware update or a reset.

Our Jabra Elite 2 review sample comes in a shade of dark grey (it also comes in a dark bluish shade called Navy)  for both the charging case and the earbuds themselves. They’ve also bundled in a short USB-C charging cable and a set of swappable small and large ear tips with the medium ear tips preinstalled on the earbuds. 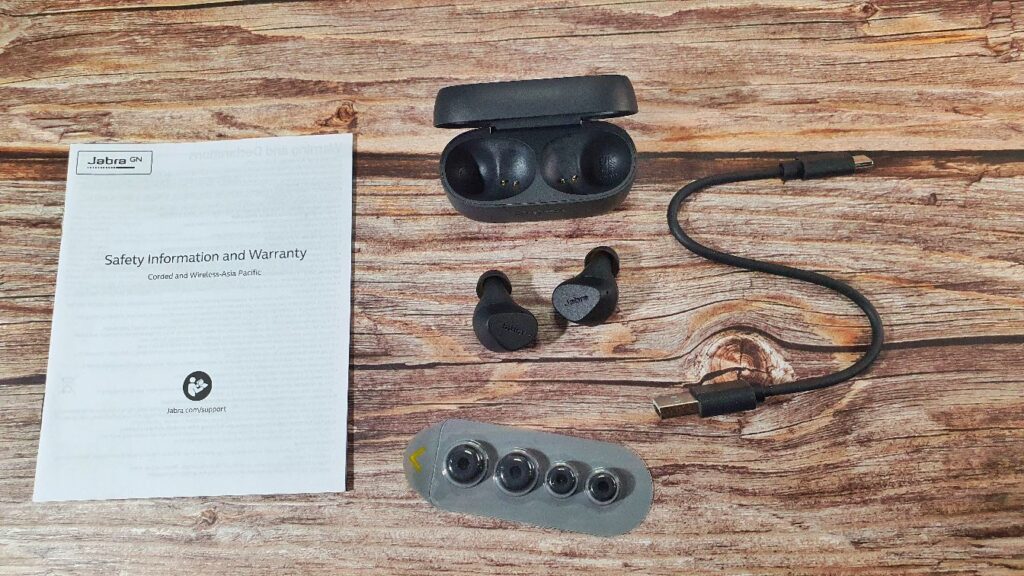 The contents of the box include two additional ear tips, a USB-C cable, a manual and the Jabra Elite 2 itself

The matte finish repels fingerprints nicely and the earbuds also feature an IP55 water and dust resistance rating. The earbuds are protected from limited dust ingress and are relatively splashproof but aren’t able to take a dip in water. The charging case doesn’t have water and dust resistant properties so some care needs to be taken to protect the case itself from potential mishaps.

Once you’ve given it the obligatory full charge via the rear USB-C port, you’ll need to pair it up via Bluetooth to your device of choice and it plays well with PCs, iOS and Android phones. Android phone users can enjoy Google Fast Pair for fast and fuss-free pairing. To get the most out of it, you’ll need to download the free Jabra+ app that is available on the Apple app store and the Google Play store. 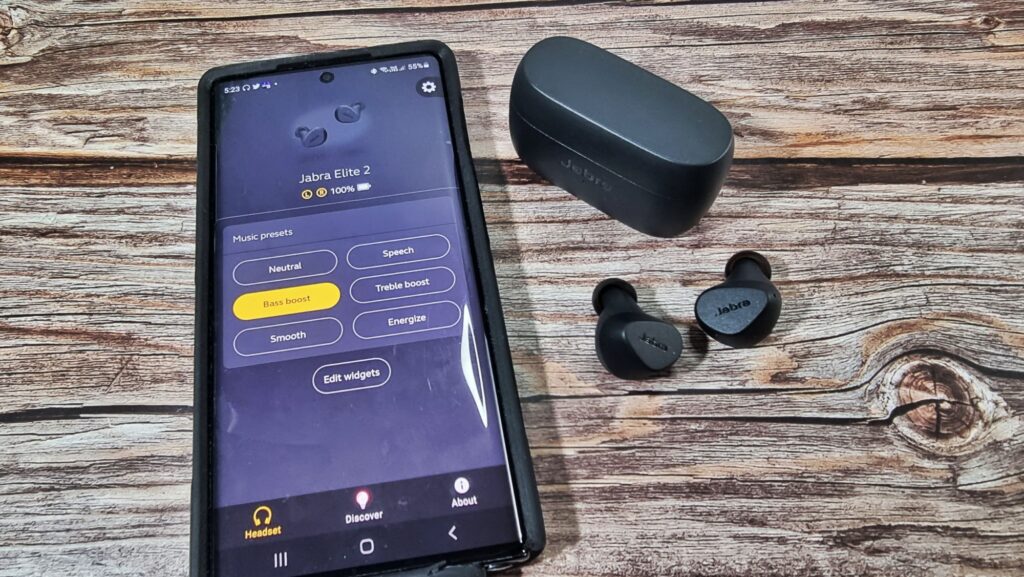 At a glance, the Jabra+ app lets you see battery life remaining n each earbud, select from one of six music presets (Neutral, Speech, Bass Boost, Treble boost, Smooth and Energize), register your earbuds and gain access to a quick start guide.

Should the Jabra Elite 2 get misplaced, you can attempt to find it via the Find my Jabra feature which gives the last known location that it was disconnected from your paired phone.

Controlling the Jabra Elite 2 is via a combination of button presses on both the left and right earbuds with basic controls such as taking and cancelling calls mirrored on both earbuds but others like volume or manipulating tracks are unique to each earbud. Unfortunately, the app lacks customisation settings for the controls and there’s no way to tweak equaliser settings beyond the six provided presets. 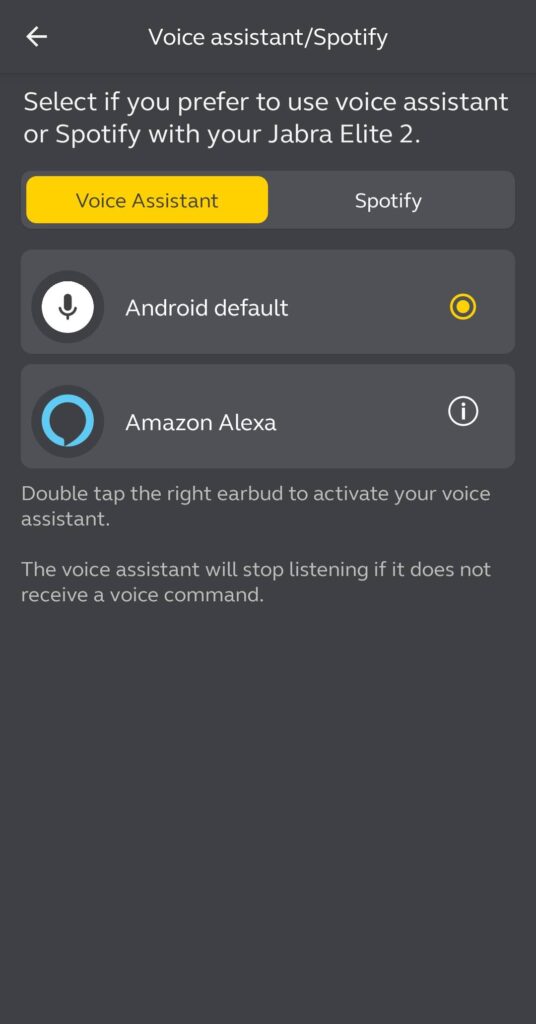 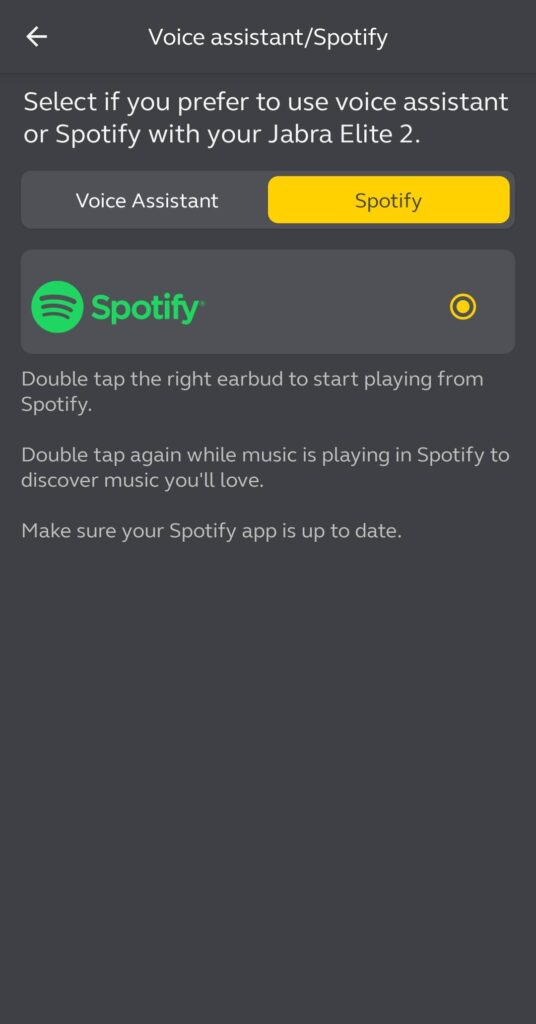 Alternatively, you can assign the double press to summon Spotify

A single button press on either the left or right earbud lets you take an incoming call or to play or pause music. Holding down the left earbud reduces the volume while doing so on the right increases the volume. A double press on the left earbud moves forward one track while a triple press moves it back one track. Doing a double press on the right earbud instead summons a voice assistant or triggers Spotify to play.

While the Jabra Elite 2 are the cheapest pair of earbuds in their current range with only a single MEMS mic per earbud, it manages to acquit itself in a decent fashion for making and taking calls.

Voice calls on Zoom and indoors in quiet environments with a fan whirling nearby and traffic offered sufficient clarity. A voice call made at the local bustling morning market still saw mild background noise on the receiving end of the call leaking through; the voice quality was clear enough that the conversation remained audible. 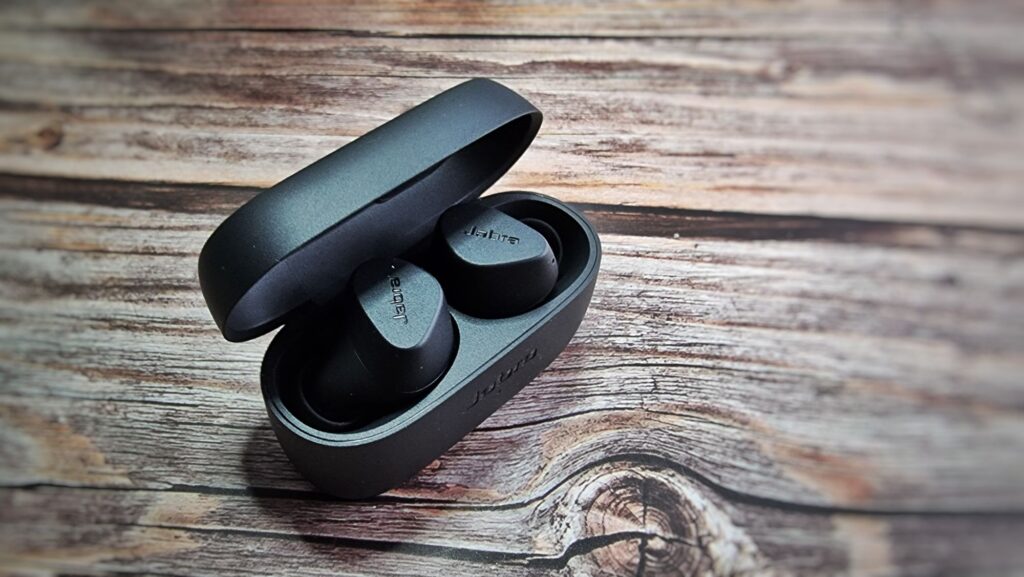 The lack of an ambient mode or active noise cancellation means that it is of less utility to those on the go like urban commuters and corporate execs. When testing a few tracks at the morning market, music remained audible with most of the background noise barely audible at 60% volume though this is also contingent on a good passive audio seal from the silicone ear tips.

When put to the test in tracks and movies, the our Jabra Elite 2 review sample’s 6mm drivers feature above average sound staging, good detail with sufficiently good if not overwhelmingly thumpy bass without muddling even during complicated tracks. Audio remains clear even at high volumes without distortion even when dialled to maximum volume.

Jabra’s precise tuning has made the most of the 6mm drivers and it is a marked cut above the horde of cheap earbuds festooning the market. In Bear McCreary’s track ‘Storming New Caprica’, the growing cacophony of drums and cymbals remained clear without muddling and Taylor Swift’s ‘Wildest Dreams’ and its bass synth heavy opening had a fair showing though it wasn’t particularly deep or thumpy.

Vaughan Williams’s deceptively simple ‘Rise of the Lark’ is an acoustically challenging track that tests an earbud’s mettle at subtler work and it does so in a competent fashion with the opening violin solo sounding crisp and clear before the rest of the orchestra hops in.

Over the course of our Jabra Elite 2 review, it shined is in more contemporary tracks with Avicii’s signature ‘Levels’ and its increasingly layered synth beats sounding distinct though the trilling crescendo near the end doesn’t quite reach the expected climax, sounding seemingly muted though this is still way ahead of what’s expected of what a 6mm driver is capable of handling.

Overall performance is good for the price but the pressure pressure builds up in the ear canals after 3-4 hours of use and you need to readjust the earbuds to relieve some of the discomfort.

On paper, the Jabra Elite 2 are rated for 7 hours of usage for the earbuds on a single charge with the charging case providing two additional charges for a grand total of 21 hours of usage.

Jabra also claims that a 10 minute charge is able to offer up to an hour of usage. With a combination of music playback and gaming on high volumes, our Jabra Elite 2 review sample lasted a bit short of the quoted time, running dry about 15 minutes or so of the stated time.

Should you buy the Jabra Elite 2

The Jabra Elite 2 prioritises quality sound for what you pay for and in that regard, it delivers on its core mission with clean, balanced sound that has a fair amount of bass and detail.

It’s a good deal cheaper than other more premium non-ANC earbuds like the Sennheiser CX 400BT at RM999 though the Jabra Elite 2 is still a bit dearer than more budget earbuds from UGREEN like the recently tested T2 True Wireless at RM139. If you prize active noise cancellation, the Huawei FreeBuds 4 that costs more at RM599 may be an option but it still falls down to your usage scenario.

If you can live with the lack of an ambient sound mode, the ability to only use the right earbud in mono mode and modest endurance, the Jabra Elite 2 and its RM299 price of entry proves to be a surprisingly competent budget offering for video calls and entertainment duties especially in work from home scenarios where having to deal with loud ambient noise isn’t as much of an issue.

We say The Jabra Elite 2 are the cheapest earbuds they have in their line-up and are capable of offering good sound quality though they forgo a number of niceties like noise cancellation and an ambient noise mode.  Bar the most outlandish or noisy scenarios, the Elite 2 is a great proposition for work from home users looking for a quality set of earbuds without paying an arm and a leg.

Fair amount of detail and bass

Can only use right earbud in mono mode