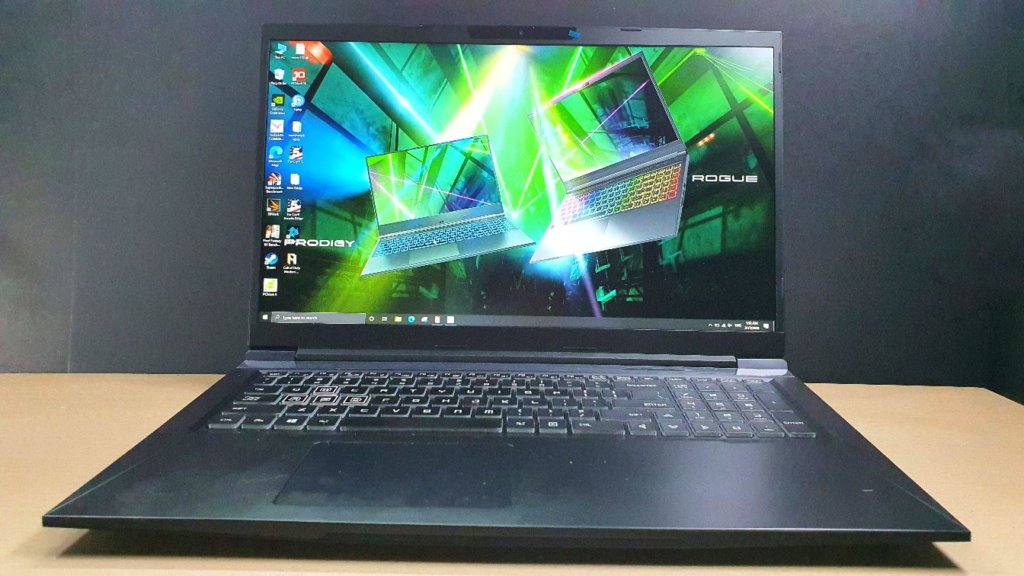 The Illegear Rogue Ryzen is the latest refresh of the brand’s Rogue gaming laptop line that swaps out the traditional usage of Intel processors for AMD’s latest Ryzen 4000 series CPUs while retaining the features and hardware that made its Intel-packing sibling a desirable gaming desktop replacement. 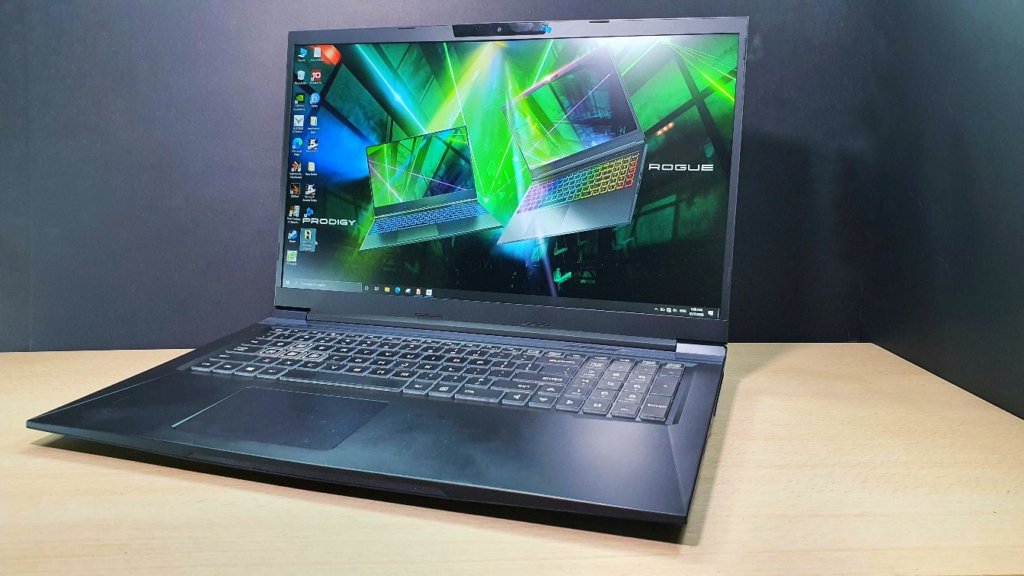 In the Illegear Rogue Ryzen, you get a chassis primarily made of polycarbonate which offers some weight savings but which gives it a relatively chunky form factor at 22mm thin while weighing a hefty 2.45kg.

In terms of design, the Rogue Ryzen aims for a contemporary look with a matte black finish, angular accents and sharp edges especially around the corners which leads to some ergonomic issues that we’ll go into later. Externally, it’s otherwise unchanged from the Illegear Rogue.

The left side of the notebook has an Ethernet port, a USB 2.0 Type A port, a mike and a headphone jack while the right side of the has an SDcard reader, and a pair of USB 3.0 ports. The rear of the laptop integrates less commonly used ports and has a pair of Mini Displayport 1.4 ports, a HDMI 2.0 output and an additional USB Type-C port. 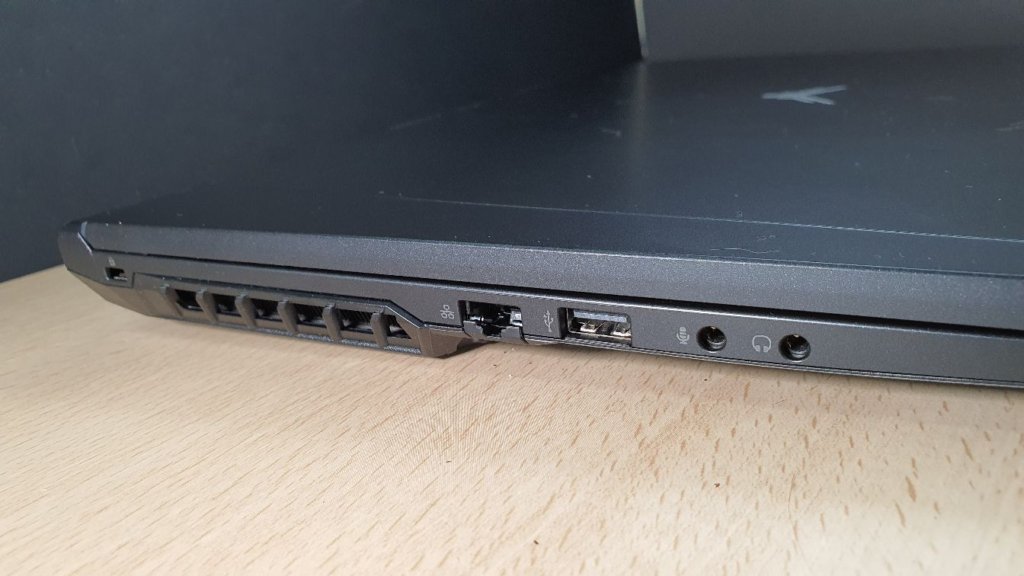 In order to offer better heat management, the chassis has significant areas around the sides, rear and bottom dedicated to heat vents along with dual cooling fans and five heatpipes to better manage heat. 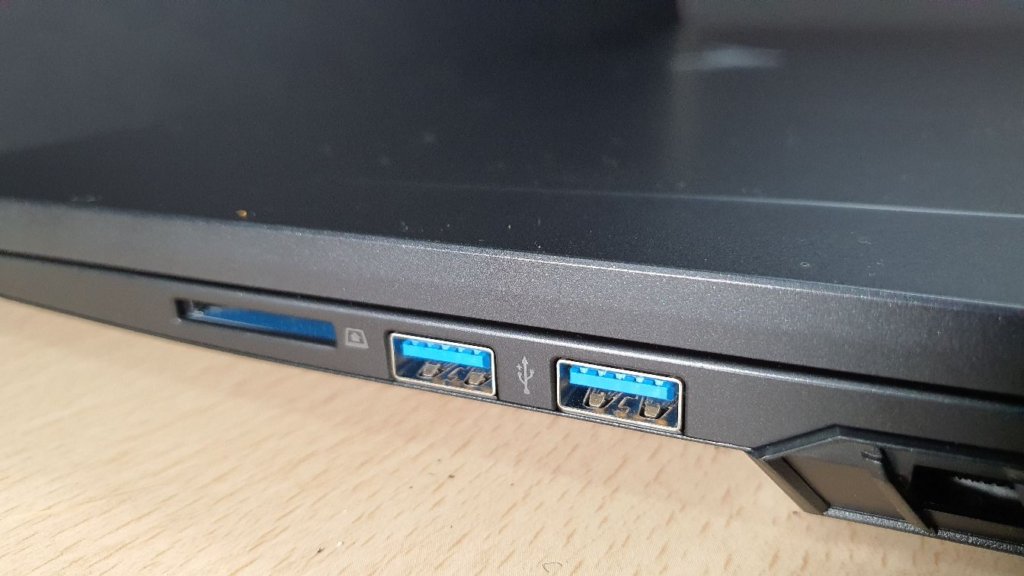 On top of the heat venting grilles, the underside also features a quartet of raised rubber feet to offer better air circulation.

When glanced at from afar, it looks suitably top-shelf though the polycarbonate chassis has a bit of give if you poke the top lid and underside too hard. Fortunately, the palm rests which are made of aluminium and the keyboard area are sufficiently reinforced to stand up to day-to-day use. 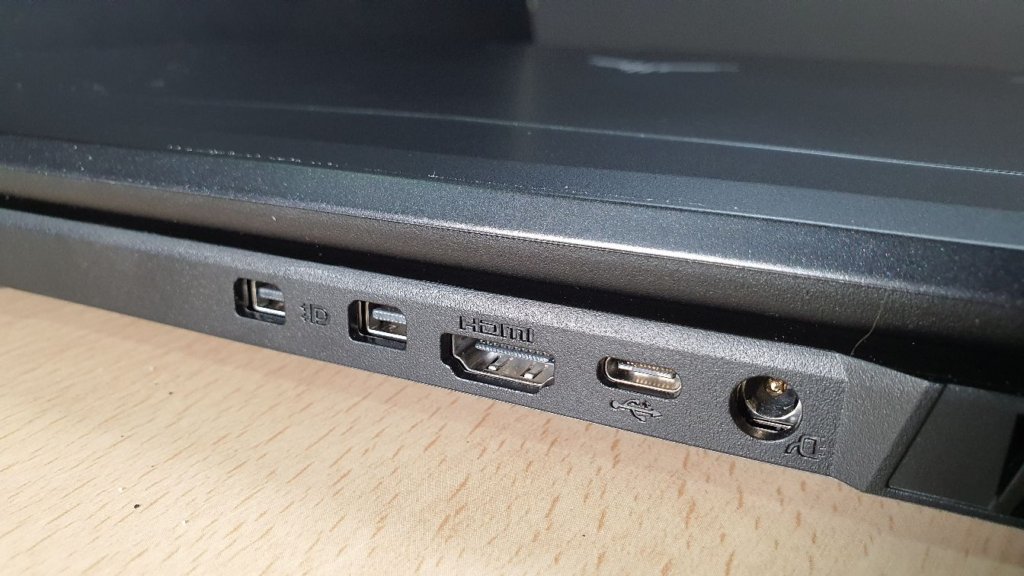 Many of the ports are evenly spaced out to prevent cluttering on the Illegear Rogue Ryzen with the rear hosting the main DC-IN power cord.

The hinge mechanism is sturdy and has no wobble but is a bit on the stiff side, requiring the use of two hands to open the lid. Flipping the lid open reveals a 17.3-inch 120Hz Infinivision matte IPS LCD display.

The main quibble here is that the panel here has a slightly slower refresh rate versus the Intel-packing variant which retains a 144Hz refresh rate though this is primarily a concern for most ardent pro-gamers where every frame potentially matters in a match. According to Illegear, they’ll be issuing a Rogue Ryzen with a 144Hz refresh rate display in the near future.

The side bezels are impressively thin though the top and bottom bezels are a bit on the thick side with the top bezel packing the customary HD videocall camera.

The keyboard itself has a full sized numeric keypad and an off-center touchpad along with a power button and a dedicated turbo boost key that ramps up the fan and processor to maximum speed. Closer inspection reveals single-zone RGB backlighting and the W, S, A and D buttons are edged in white. 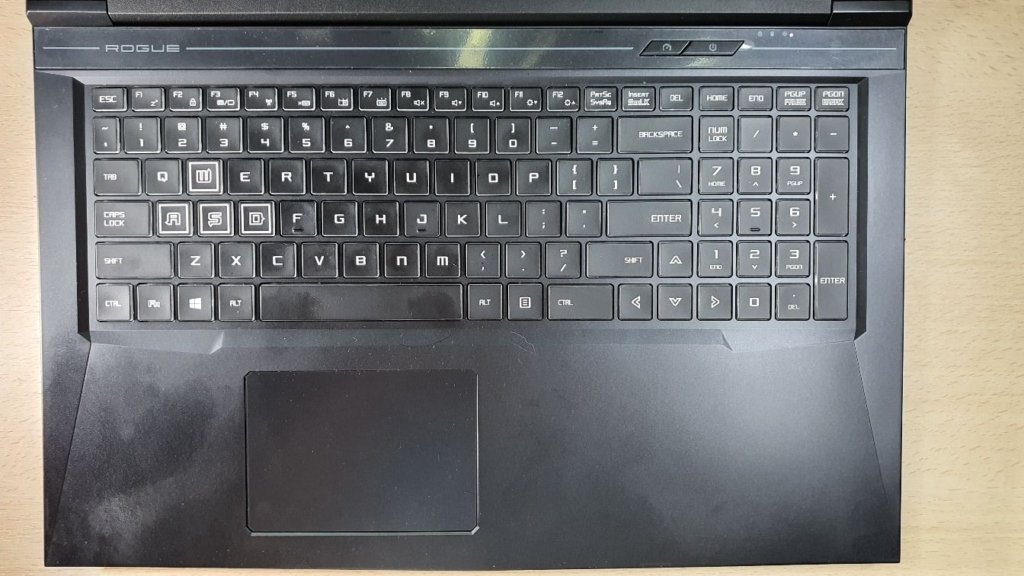 The biggest quibble here is possibly a design oversight as the sharp edges on the corners makes it uncomfortable to type on in certain positions after extended periods of time.

Overall build quality is above average, with emphasis placed on sturdiness though the biggest draw to the Illegear Rogue Ryzen is what lies under the hood.

In terms of hardware, our configuration of the Illegear Rogue Ryzen comes with the following :

This is effectively the top of the line variant though you can get the entry level version which costs a lot less which has otherwise similar hardware but which bumps the processor down to an AMD Ryzen 5 4600H and an NVIDIA GeForce GTX 1650Ti with 4GB GDDR6 VRAM with Optimus, 16GB DDR4 3,200MHz RAM and a 500GB M.2 PCie NVMe SSD.

The usage of the smaller sized but more premium Samsung SSD in our test unit isn’t standard as it usually ships with a 512GB off-brand SSD as stock but the swap in our test unit adds in an extra measure of quality and reliability. Coming as standard with all Rogue Ryzen notebooks is an Intel WIFI 6 AX200 2×2 M.2 card for faster data transfer speeds.

In keeping with Illegear’s reputation for customisability, the Illegear Ryzen has two RAM slots and two SSD bays, allowing you to upgrade it up to 64GB RAM and install up to two 2TB SSD drives.

Comparisons will be drawn to its sibling with a 10th Gen Intel Coreprocessor. If you configure an equivalent high-end variant on Illegear’s website with an Intel Core i7-10750H, similar storage and a 144Hz display as there’s no 120Hz variant, you get a laptop that costs a bit more at RM6,048

The Ryzen 7 4800H is a mobile processor on the Zen 2 (Renoir) microarchitecture with 8 cores and 16 threads that’s constructed on a 7nm process. On paper, the processor is clocked at 2.9GHz with the ability to ramp up to 4.2Ghz in Turbo mode. While it has an integrated Radeon RX 8 Vega 7 graphics card, our Rogue Ryzen uses NVIDIA’s GeForce RTX 2060 GPU for graphics crunching duties.

Hardware aside, the Illegear Ryzen has a unique bit of firmware added dubbed the Illegear Command Centre in keeping with other Illegear notebooks which lets you customise the RGB lighting and tweak performance profiles. 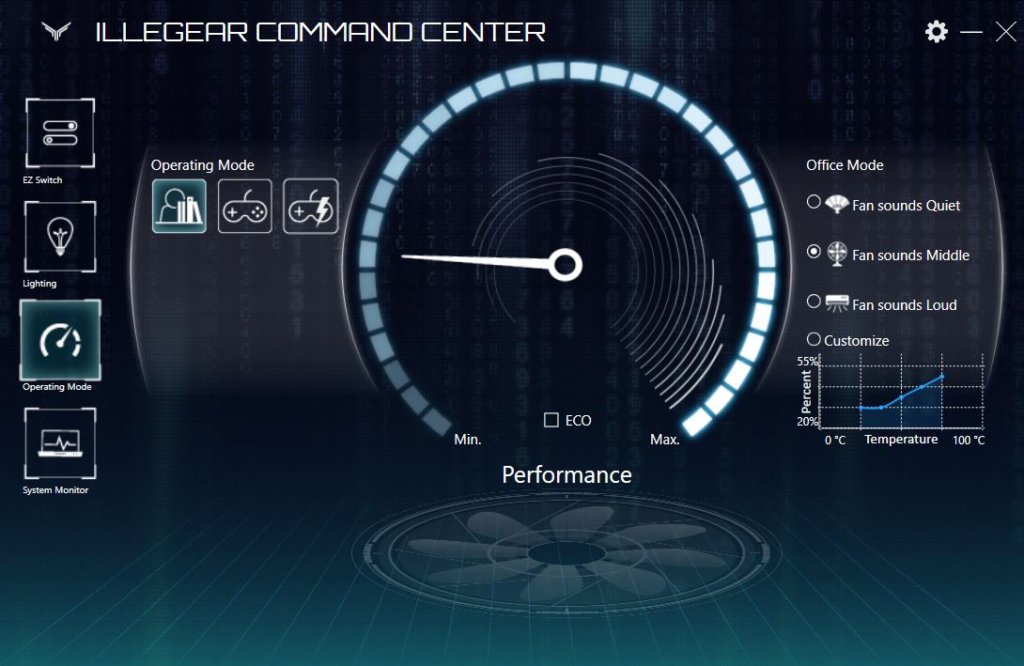 By default, the Illegear Rogue Ryzen runs on a mostly silent Office mode that keeps the fan noise to a minimum. You can also bump it up to a Game Mode that automatically ramps up the fan speed depending on what you’re doing. If you need to dial everything up to 11, you can kick in a Turbo mode that forces the laptop fan speed to run at maximum speed along with ramping the processor clock speed up to its theoretical maximum.

In terms of benchmarks, we let it run in its default Office mode and in Turbo mode. Here’s how it fares:

Turbo mode displays notable improvements in performance in synthetic benchmarks with about a 10% improvement especially in multi-core scores. 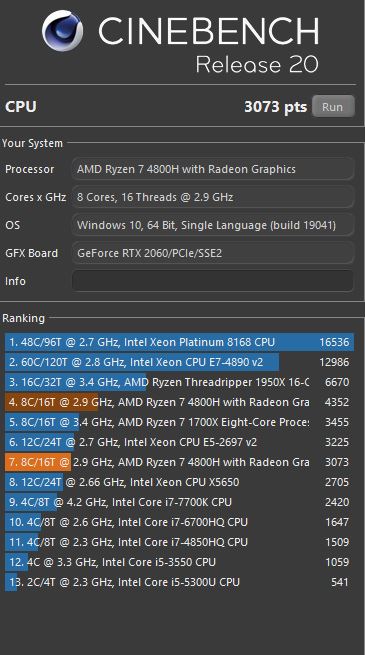 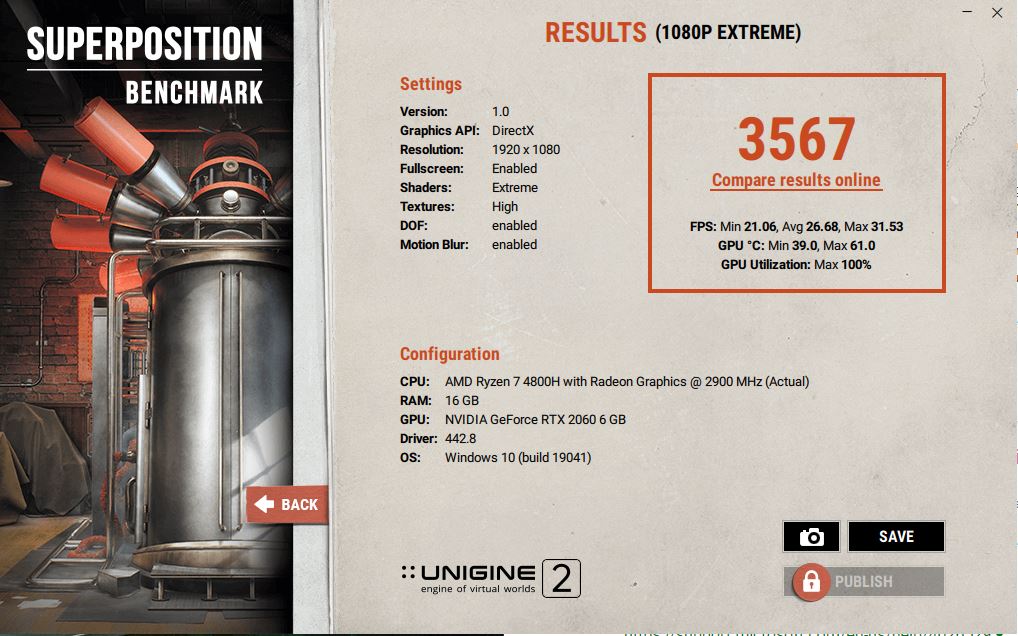 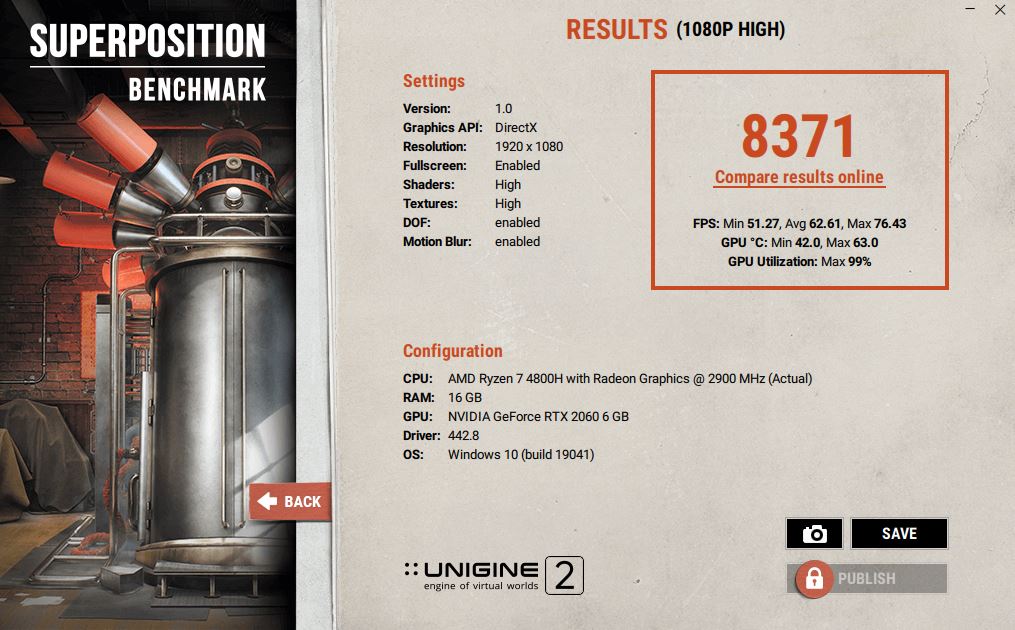 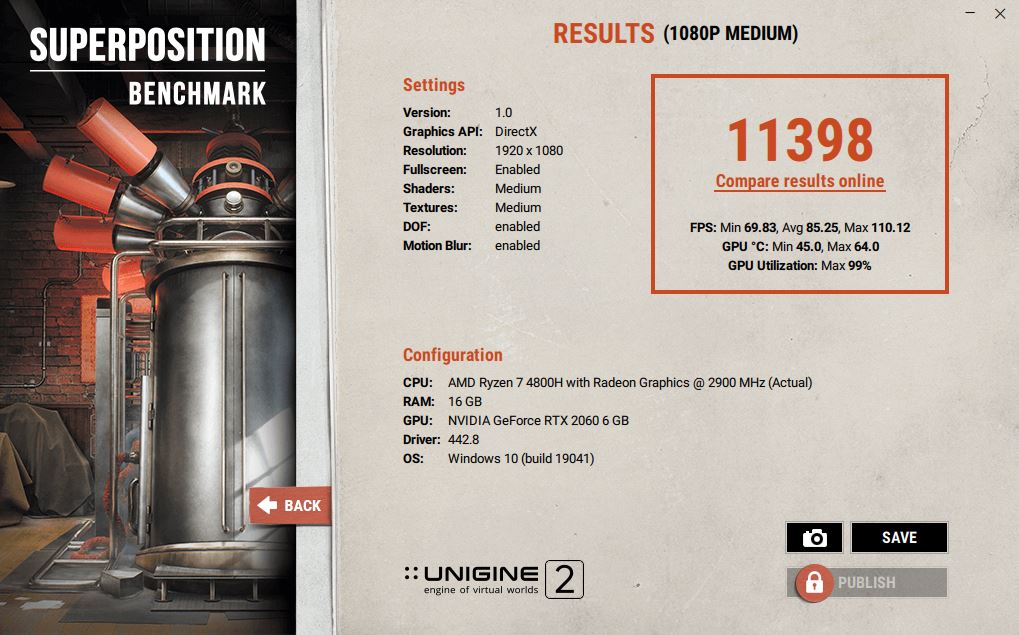 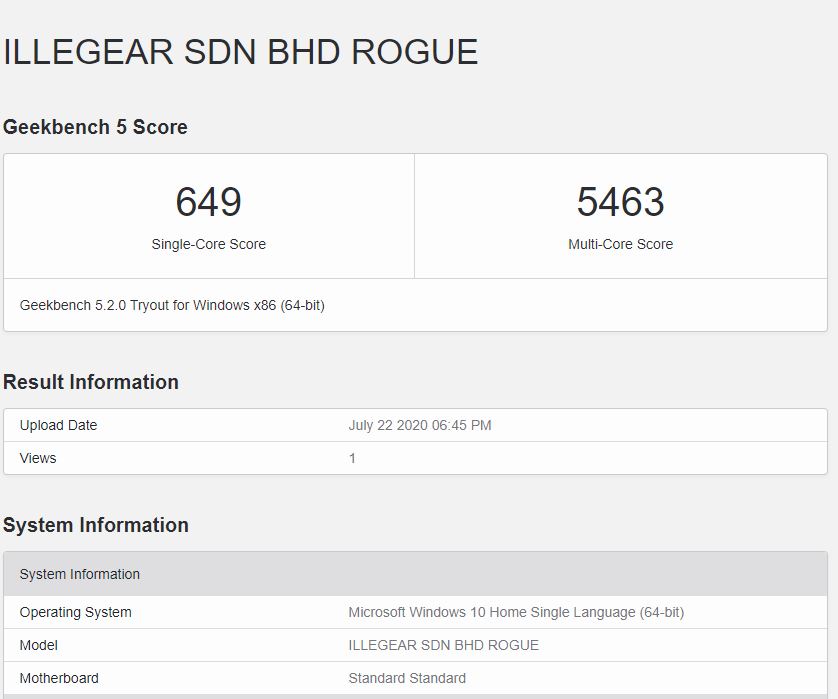 When put to the test with several extended forays into Far Cry 5 and Warzone at 1080P resolution at 120Hz for several hours on Turbo mode, the Rogue Ryzen managed to keep temperatures at a reasonable clip at about 66°C on average though the fan noise is literally like a jet engine with an audible enough screech that’s only drowned out by in-game gunfire when ramping the audio up to maximum, effective though it may be. 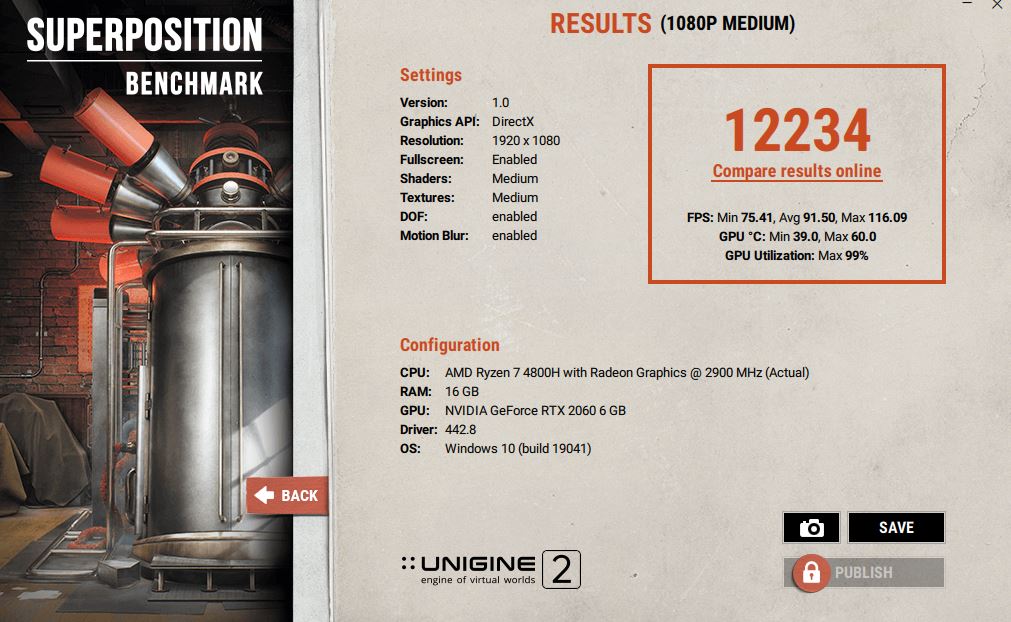 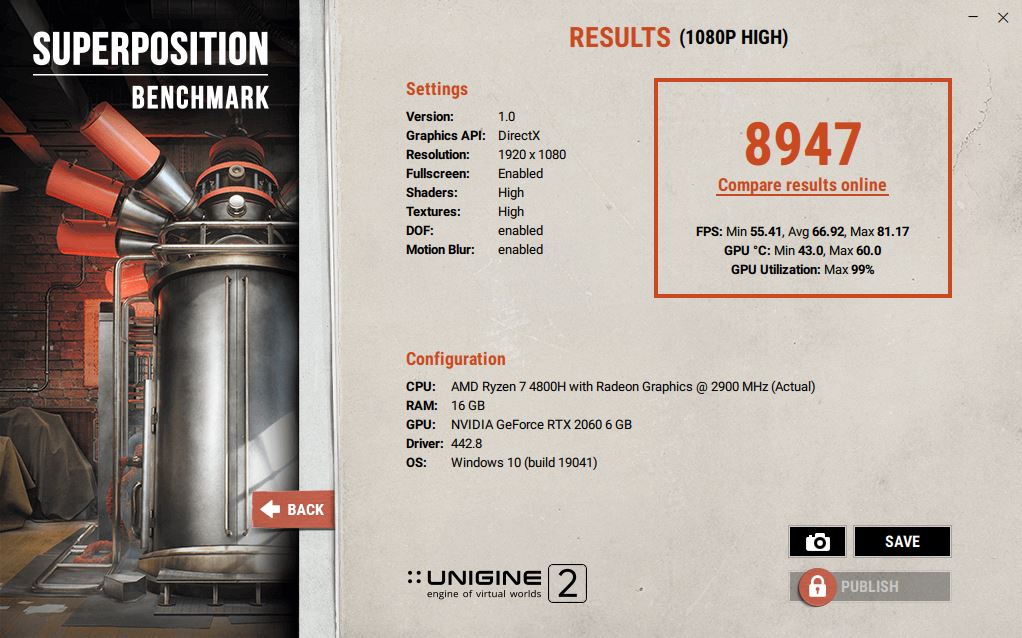 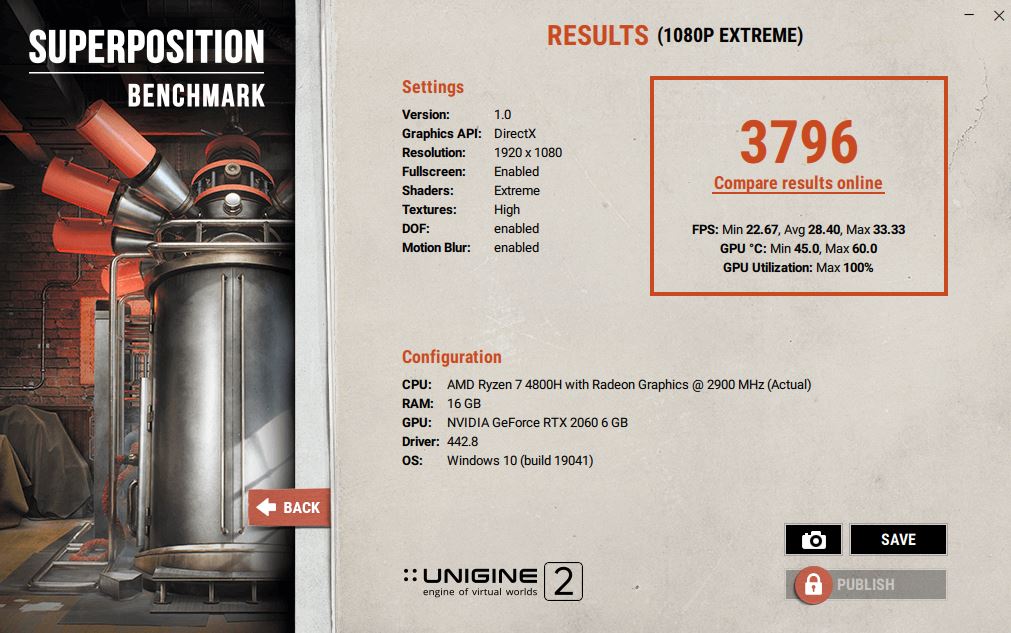 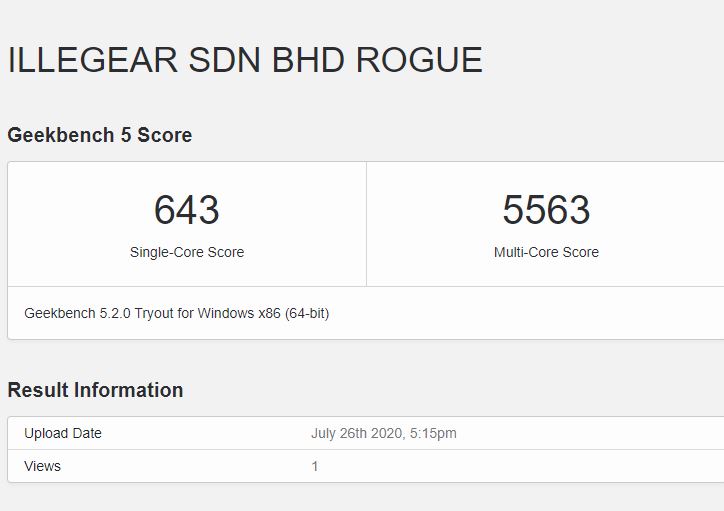 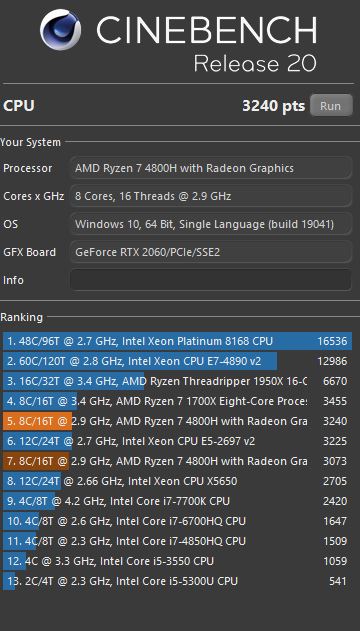 The keyboard proved to be competently made and responsive though key placement needs some improvements that will hopefully take place in future revisions of the chassis. The usual screen brightness and audio volume key shortcuts prevalent on many other gaming laptop keypads are absent here which means you’ll need to reach across all the way to the function keys up top. The touchpad is on the small side and while it’s off-center placement is intended to optimise it for gaming, it’s counter-intuitive in this context as it’s really only suitable for paperwork. 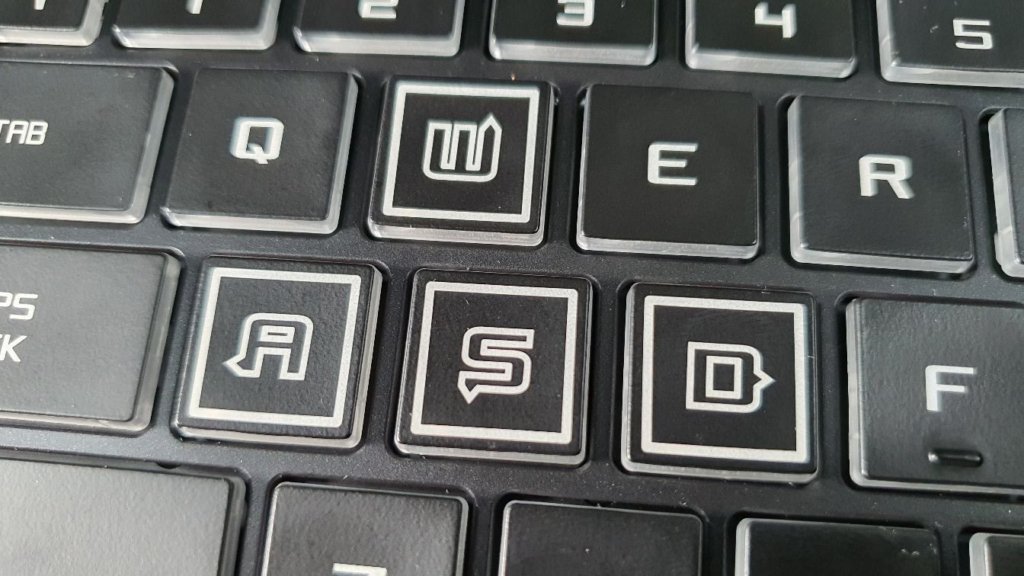 The W,S,A and D keys of the Illegear Rogue Ryzen is embellished in white.

When used to render 1080P video, the Rogue Ryzen managed to render a 5 minute test clip in minutes. Needless to say, using this for mere paperwork and emails is impressive overkill. 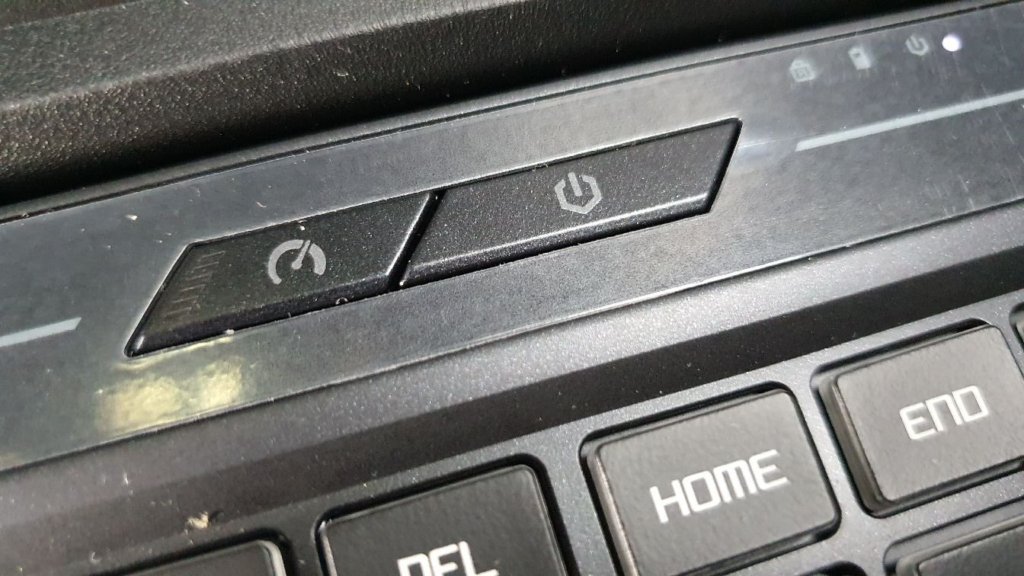 The Illegear ROgue Ryzen has a Turbo button alongside the power button for beefy power on demand.

The 120Hz display lacks NVIDIA GSync tech, presumably as a cost saving measure but we didn’t experience any stutter or significant lag drops when gaming on the Rogue Ryzen. Colour rendition was above par with fairly good blacks and colour accuracy when run through several reams of test footage and images. 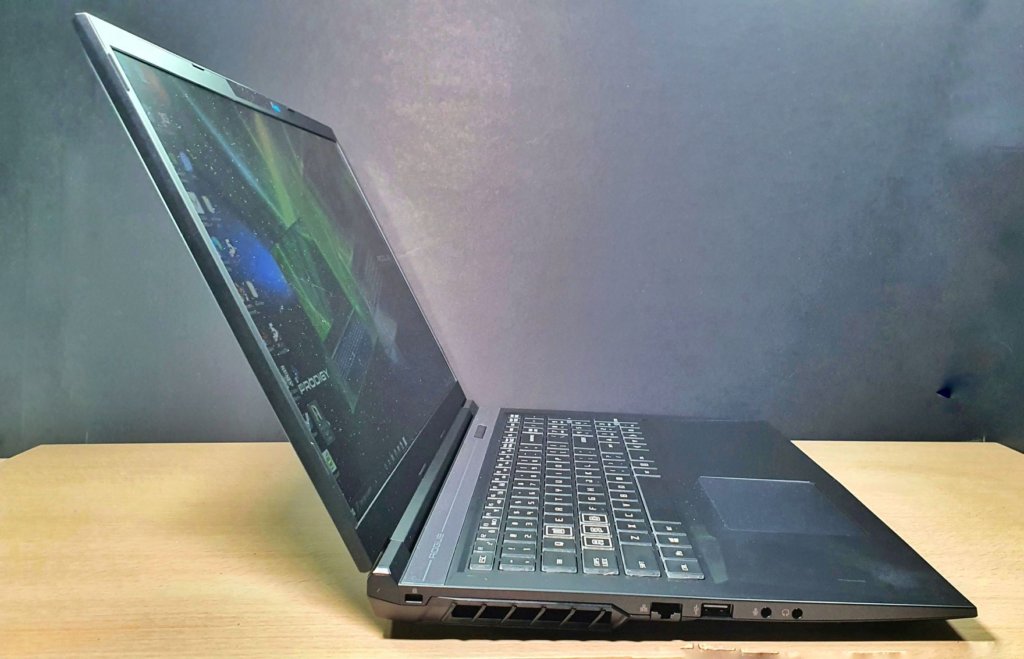 Perhaps the biggest quibble here are the somewhat underwhelming stereo speakers. Even when dialled to maximum, they aren’t particularly loud but they do the job in a quiet room for music, the odd movie or two and for solo gaming.

Battery life on the provided 47Wh battery is fair for a gaming laptop but unremarkable, lasting about three hours tops for heavy video editing and gaming with the NVIDIA Optimus tech helping to swap to integrated graphics when working on non-intensive tasks.

While the configuration offered by Illegear is a bit pricier than its equivalent with a 10th Gen Intel Core i7-10750H CU which also has a higher refresh rate display, both the Rogue Ryzen and original Rogue offer equally good performance for gaming and creative work alike.

The inclusion of AMD processors in the Rogue Ryzen is of greater value for the entry level Rogue Ryzen variants, which are available for under the RM4,000 mark. While the 120Hz display variant that’s currently available is sufficient for most games and content creation, more ardent gamers may want to wait for the 144Hz display variant that’s slated to arrive in the near future. 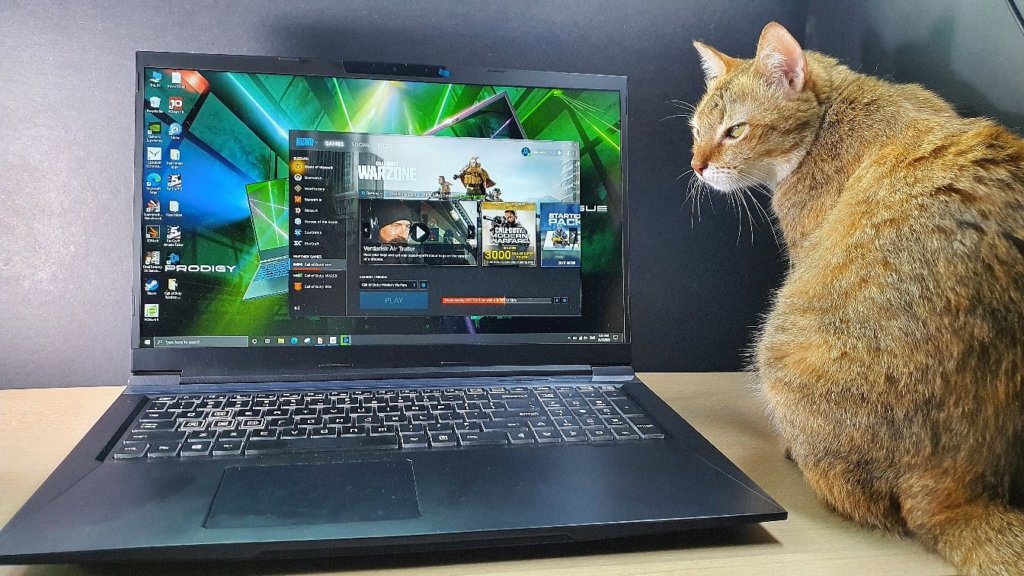 As it stands, this top of the line variant of the Illegear Rogue Ryzen represents good value for what you pay for and is one of the few 17-inch gaming laptops with its price tag and hardware. The top of the line configuration is well worth a look if you’re seeking a large gaming desktop replacement though more casual gamers and users will be best served by the entry level variant that can still tackle most mainstream gaming in a competent fashion.

What we liked Luscious 120Hz display, fast performance, decent price to performance ratio
What we didn’t Unremarkable battery life, speakers could be louder, really loud fans at full blast
We say The Illigear Rogue Ryzen gaming laptop with an AMD Ryzen 4000 series CPU delivers great performance for what you pay for with sufficient performance to tackle the latest games and content creation. Alas, it has a few minor quibbles here and there that prevent it from achieving gaming greatness.

Review unit courtesy of Illegear. Available for purchase at https://store.illegear.com/prodigy-rogue-series/227-illegear-rogue-ryzen.html

The Illigear Rogue Ryzen gaming laptop with an AMD Ryzen 4000 series CPU delivers great performance for what you pay for with sufficient performance to tackle the latest games and content creation. Alas, it has a few minor quibbles here and there that prevent it from achieving gaming greatness.