As notebooks go, the Illegear Onyx Pro comes out of the starting gate in an impressive fashion with a surprisingly light chassis for a gaming lappie combined with impressive specifications that, depending on how deep your pockets go, can get you a 15.6-inch 4K display and a full sized NVIDIA RTX 2070 GPU. 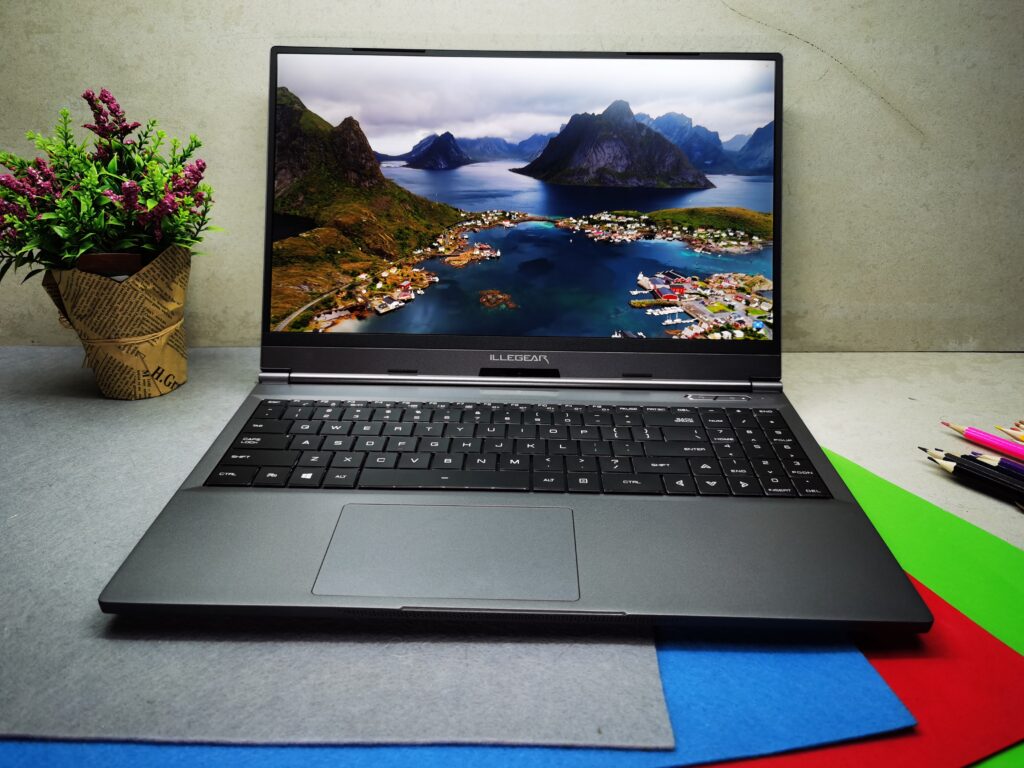 Our test unit of the Illegear Onyx came with the best specifications possible at this point in time. Here’s what our test unit packed:

Optionally, you can downgrade the display to a 15.6-inch Full HD 240Hz sRGB panel if you prioritise refresh rate, opt for a cheaper NVIDIA GeForce RTX2060 with 6GB GDDR6 VRAM and tweak the amount of installed DDR4 RAM from 16GB up to 64GB and the storage up to a 2TB M.2 PCIe NVME SSD.

The configuration we got has 16GB DDR4 RAM, a 512GB M.2 PCIe NVME Seagate Firecuda SSD and a 4K AMOLED panel clocked in at RM8,397. Even at this lofty price, it’s still cheaper than many other competitors with equivalent hardware in the market.

Upgrade options use up one of two M.2 SSD bays in the ONYX Pro and if you have deep pockets, you can add another SSD to the mix.

Common across all configurations is the CPU, which is Intel’s 9th Gen Core i7-9750H CPU which is built on a 14nm process, with 6 cores and 12 threads and a base frequency of 2.6GHz and a max turbo frequency of 4.5GHz. It also integrates Intel UHD Graphics 630 though this is icing on the cake as our test unit already has an NVIDIA GeForce RTX 2070 GPU to handle heavy gaming; technically this card is intended for full-fledged desktops.

While it’s intended for heavy gaming, this array of hefty specs combine with its portability also make it ideal as a designer laptop for creatives as it has more than enough pixel crunching punch to tackle video rendering and multi-layer art projects in Photoshop. The fact that you can do a run in Modern Warfare Warzone later is an added bonus.

Out of the box, the Illegear Onyx Pro comes with the bare basics that include the laptop itself wrapped in a protective fabric sleeve and a rather massive 230W power pack that’s the size of an old-school paperback novel while weighing close to a kilo or so.

Externally, the laptop comes in a grayish shade of gunmetal gray which repels fingerprints quite nicely. The laptop itself is relatively compact at 18mm thin while weighing a manageable 1.5kg even with the amount of hardware that it packs. 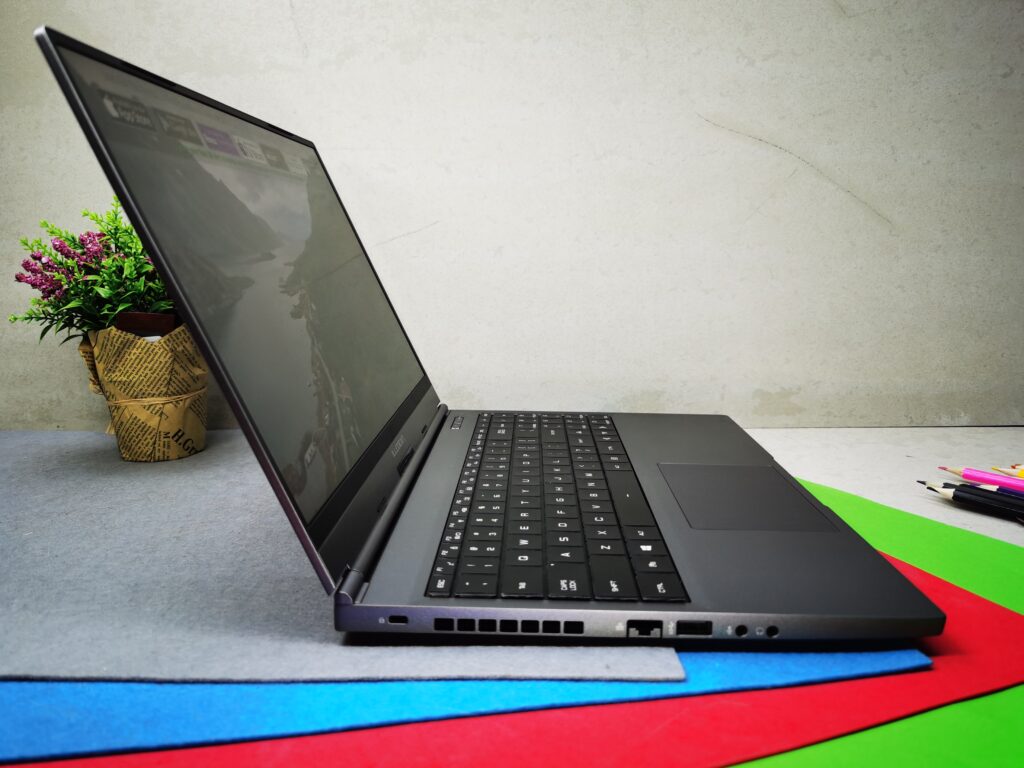 The top lid itself bears Illegear’s logo and looks posh indeed from afar though there’s some give in the centre portion of the lid with some flex if you attempt to bend it or give it a poke though it’s not flimsy by any definition.

Framed within 5mm thin side and top bezels is a 15.6-inch 4K Samsung AMOLED Infinivision display that’s been calibrated for colour accuracy and can reproduce 100% of the DCI-P3 colour space though it has a slower 60Hz refresh rate. This quality, in and of itself is crucial for a designer laptop seeing as colour accuracy is paramount when editing snaps and doing colour grading on video.

The bottom bezel is still a bit on the thick side and hosts a rather oddly placed 720P selfie webcam just next to the hinge. At this angle, the camera is aiming right up your nose, which was a complication shared by the 2018 version of the Dell XPS 13.

In terms of ports, the Onyx Pro has quite a generous selection that’s evenly distributed on the left, right and rear of the notebook. The right side of the laptop hosts a microSD card reader and a pair of USB 3.0 ports while the left has a wired ethernet port, a USB 2.0 port, a headphone and a mic line-in jack. 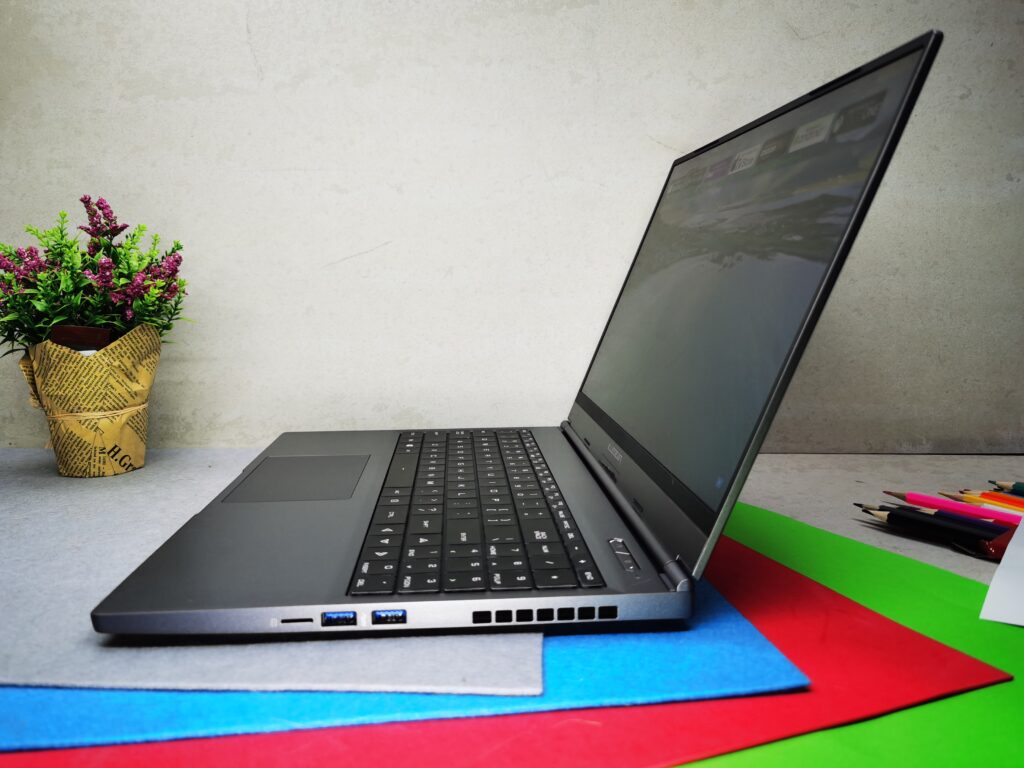 The rear of the notebook hosts the obligatory DC-IN power jack, a USB Type-C port, a HDMI 2.0 output and a pair of mini display port 1.4 all placed in a row on the rear.

Port placement aside, the Onyx Pro features a fairly sturdy hinge that can angle the screen at up to a 45-degrees cant with very little wobble involved.

They’ve also managed to shoehorn a full-sized membrane keyboard into the Onyx Pro with a numeric keypad, about 2mm of key travel and 4-zone RGB backlighting. They’ve also included a generously sized touchpad that can be turned on or off at will by firmly tapping the upper left corner where a small indicator light is. 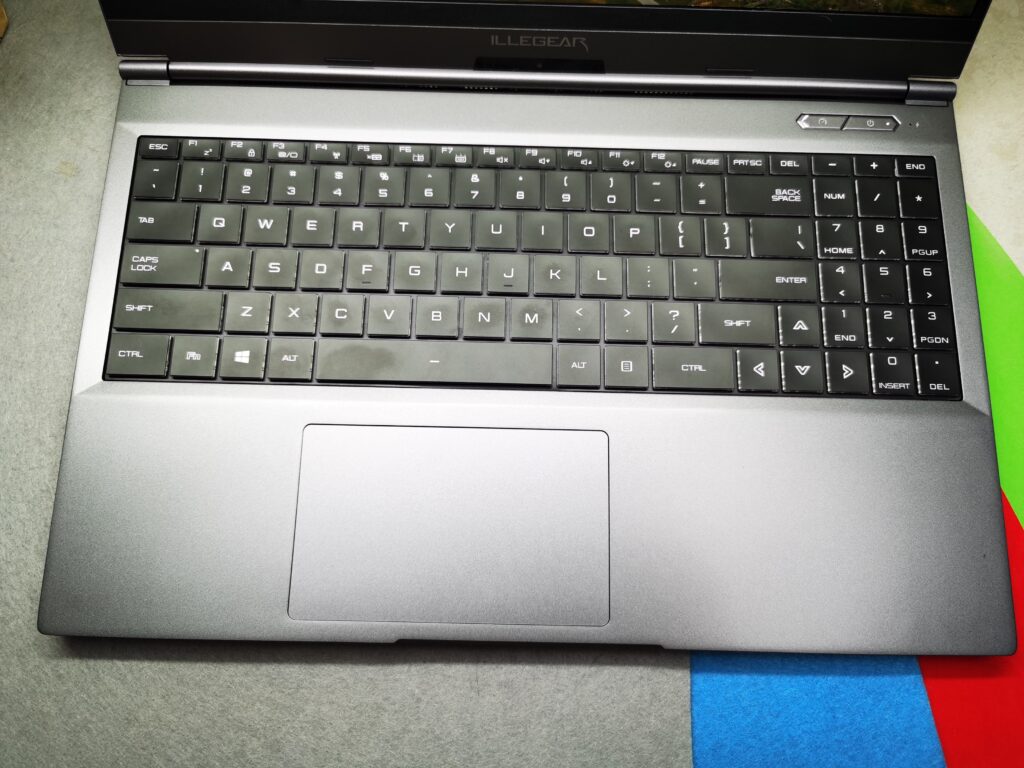 The keyboard buttons are fairly standardised in terms of layout though the Onyx Pro hosts a selectable mode shortcut button that swaps between Office, Turbo and Gaming modes next to the Power button. Optionally, you can directly enable this via the Illegear Command Centre app installed on the PC.

The front base of the laptop hosts perhaps the most superfluous aspect of its design, a light-up LED strip that seems to fulfill no function other than to simply strobe back and forth. Blingy? Yes. Useful? Maybe not so much.

In terms of benchmarks, the Illegear Onyx Pro proved to be a very impressive rig as it is one of the few currently in the market to pack a desktop grade graphics card. We managed to get the following scores on standard non-turbo settings:

When subjected to gaming, it managed to handle the Division 2:Warlords of New York at the highest settings with 4K resolution and everything dialled to maximum at a comfortable 60fps.

In Modern Warfare Warzone, the Onyx Pro also managed to tackle it at 4K resolution at the highest settings at 80fps without issue. We also handled 4K video editing on the Onyx Pro and it did not disappoint with relatively fast render times and lengthy 1080P video edits were accomplished in mere minutes. 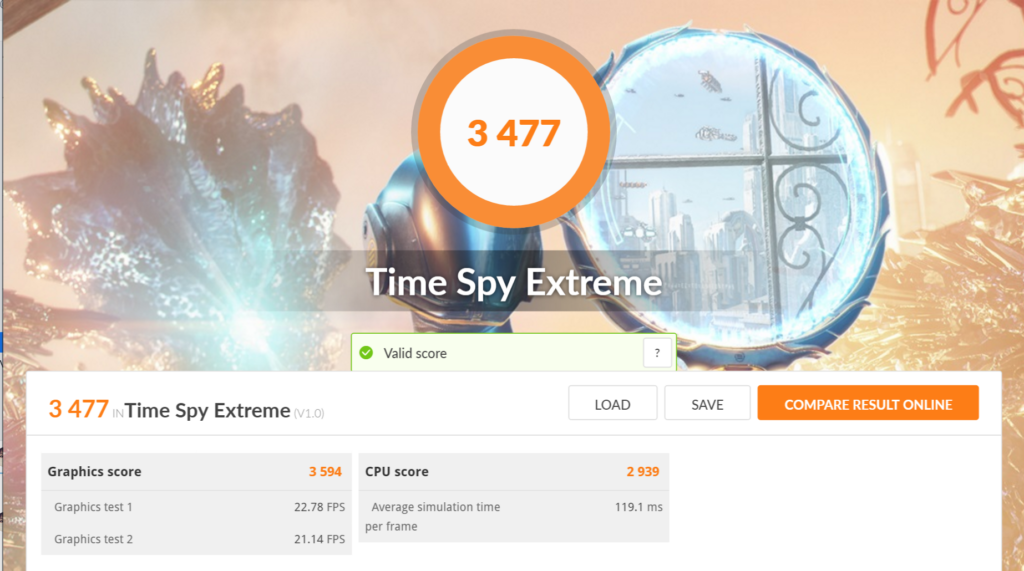 Heat is kept manageable with an average of between 80° – 90°C when conducting extended gaming which is perfectly fine for a high-end graphics card but the upper section of the notebook between the display and keyboard got uncomfortably hot to the touch. 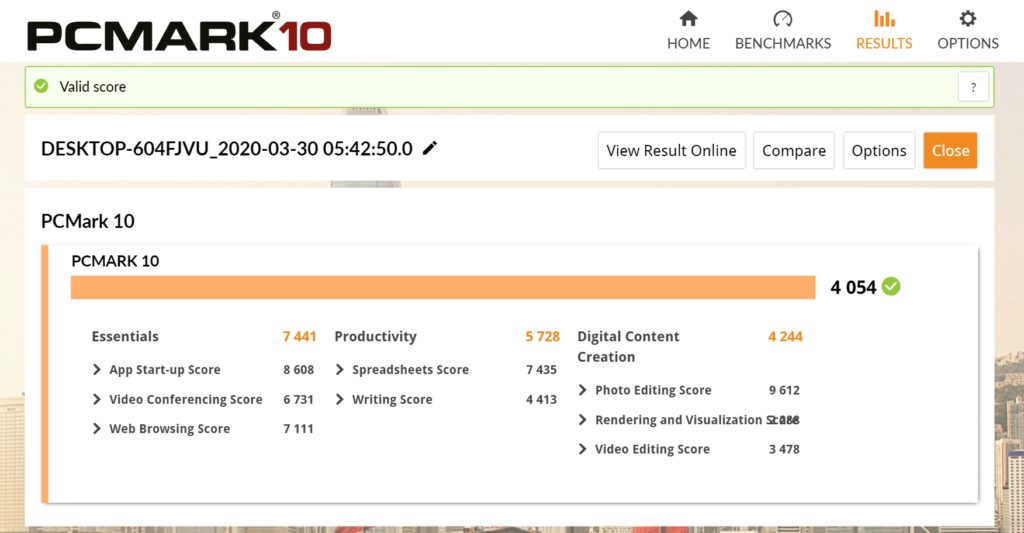 Under Turbo mode and when playing demanding games, the Onyx Pro’s cooling fans tend to get audibly loud. Fortunately, if you’re working on less demanding stuff, you can opt for a quieter fan mode and reduced processor speeds along with the use of the Internal HD 630 graphics with Office mode which is sufficient for spreadsheets and 1080P video editing. 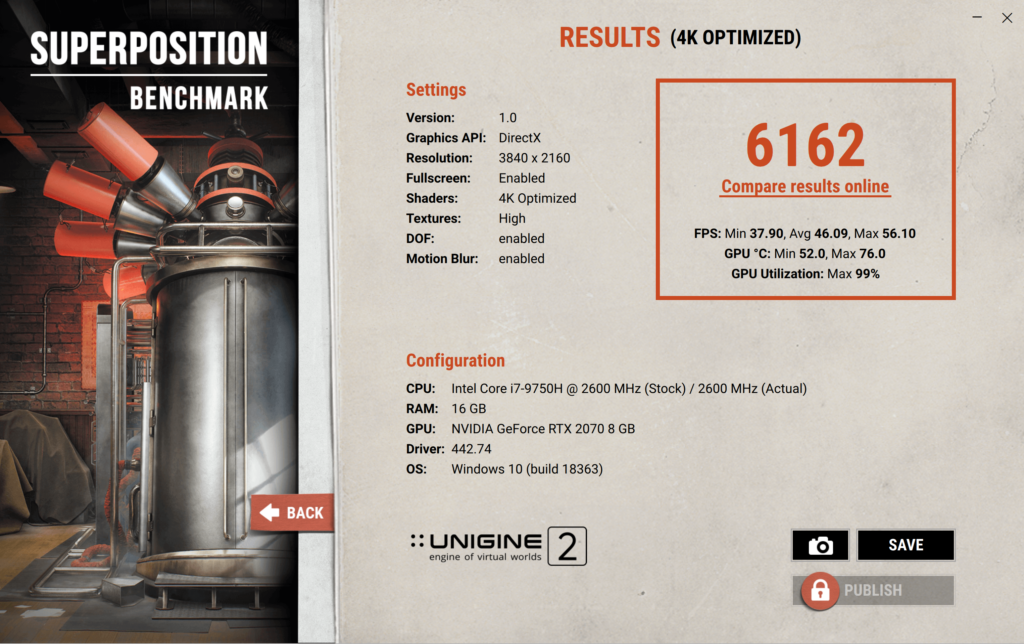 The provided 4K AMOLED display proved to be gorgeous to behold with excellent colour rendition while the paired stereo speakers proved to be pleasantly loud with good clarity even at maximum volume. 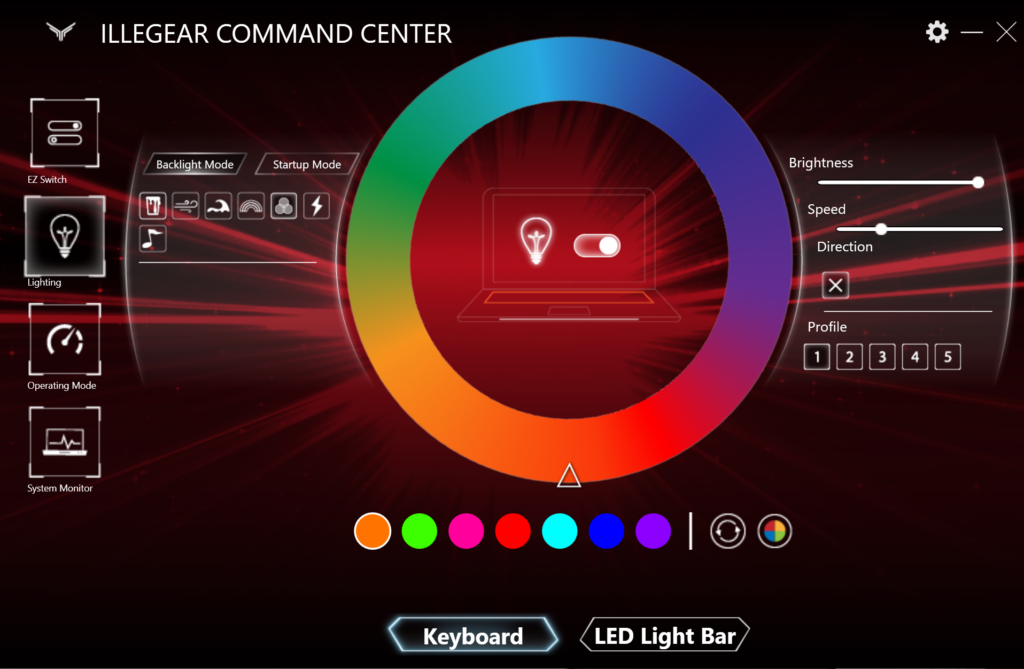 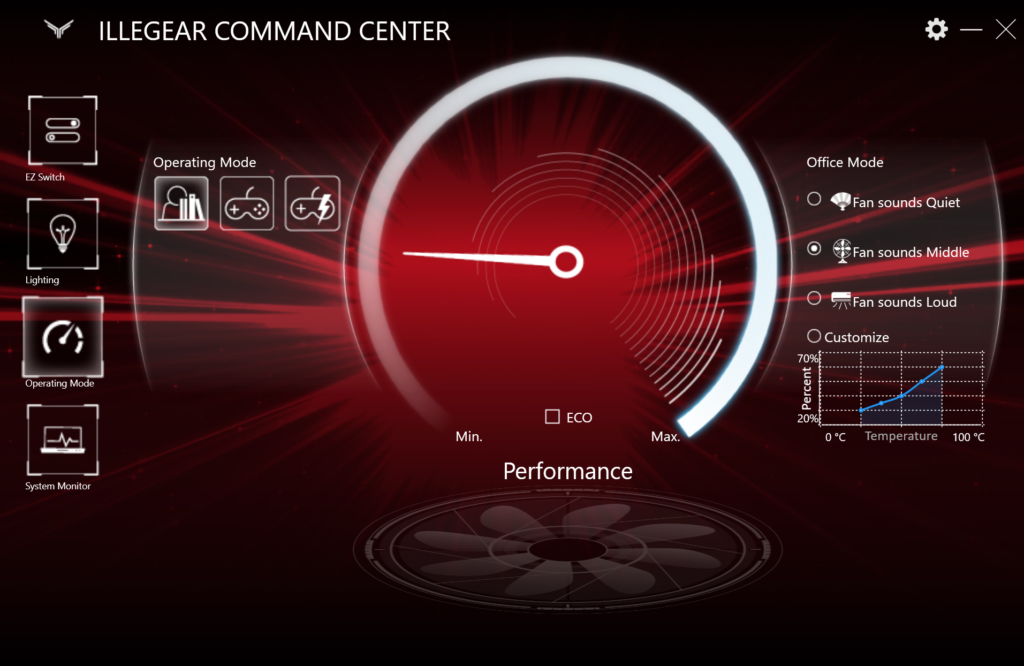 The provided keyboard was a decent affair that allowed us to achieve a fair 90wpm though the keys are a bit too close to each other for personal comfort.

Battery life is decent but unexceptional as gaming laptops go. Unplugged and performing non-intensive work at standard settings without gaming involved, it’s able to last slightly more than 3 hours or so.

The Illegear Onyx Pro is a rare breed of laptop that combines excellent performance in a light form factor without breaking the bank. For what you pay for, you’re getting an excellent full sized NVIDIA RTX 2070 GPU, a large 15.6-inch AMOLED display and a beefy Intel 9th gen processor to go with it too.

As laptops go, the Illegear Onyx Pro is also light and portable, more so for the fact that it manages to achieve this goal while cramming all this powerful hardware in it. If you’re in need of a high-powered and portable designer laptop that’s also equally ideal for gamers, the Onyx Pro is a very reasonably priced proposition.

What we didn’t Gets hot under heavy workloads, heavy power pack , odd webcam placement at base of display, front lightbar superfluous, cooling fans are pretty loud

We say The Illegear Onyx Pro hits all the high marks for a high-end gaming and designer laptop, offering a light magnesium alloy chassis and a powerful set of specifications including a potent NVIDIA GeForce RTX2070 GPU, allowing it to tackle the latest games and edit video on the go This is a superb addition to any gamer or content creator’s arsenal. 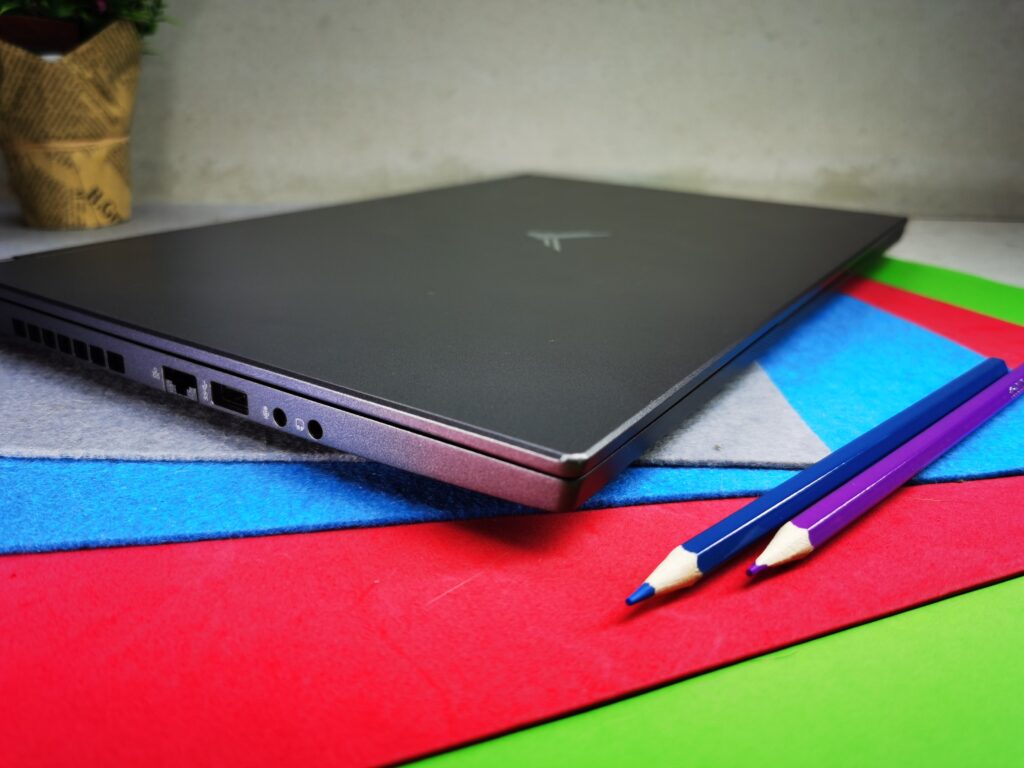 At the time of publication, Illegear announced that their latest product refresh of the Onyx Pro will include the new Intel 10th Gen i7-10875H processors as standard which ought to offer a significant bump in performance. Check out Illegear’s updated Onyx Pro here.

Review unit courtesy of Illegear. To order the Illegear Pro visit their official page at https://store.illegear.com/extreme-performance/207-illegear-onyx-pro.html