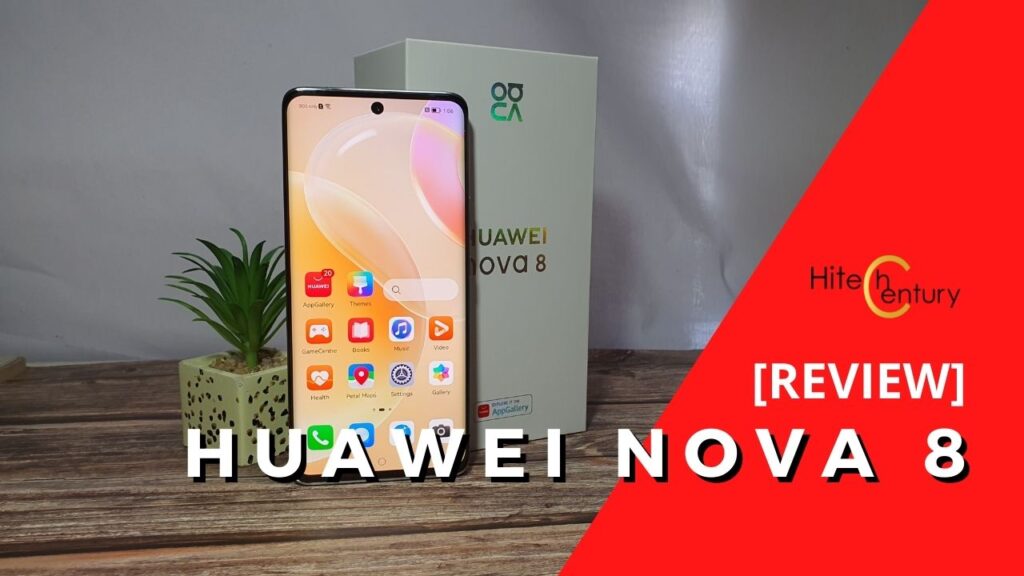 The latest addition to Huawei’s midrange nova series, the nova 8 smartphone that has just arrived in Malaysia is the more powerful and pricier sibling of the recently released nova 8i that we tested a while back with a more powerful selfie camera and a smoother, 90Hz OLED display. Here’s our Huawei nova 8 review where we put it to the test.

Aesthetically speaking, our Huawei nova 8 review unit is a far cry from the cheaper nova 8i with a design and build quality that can give a flagship phone a run for its money. It only comes in one paint job that they’ve dubbed as Powder Pink but it looks fetching indeed. 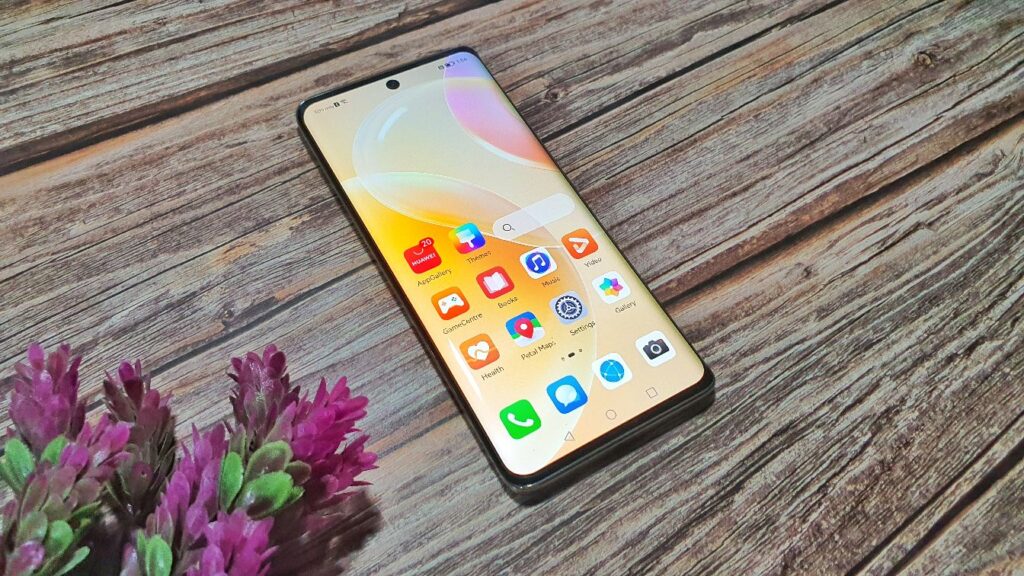 The entirety of the backplate is done up in a chrome metallic finish over an aluminium backplate that has the faintest hint of pink when it reflects the light with striations centered around the oval-shaped quad camera array emplaced in the upper left corner. The camera array certainly looks distinctive if aught else which sets it apart from the competition though the finish itself is a fingerprint magnet.

The right side hosts a power button and volume rocker while the left of the phone is otherwise bare of any controls. The top hosts a dual nano SIM card tray while the base of the phone has a USB-C port for charging duties and a griller for the sole mono speaker array.

Up front, the nova 8 sports a luscious 6.57-inch OLED display that has a rounded punchhole for the front facing 32MP F/2.0 selfie camera that has double the sensor size of the 16MP model used in the nova 8i. The display itself is exceptionally well appointed, with tiny bezels all around, curved edges that meld into the metal frame and a smooth 90Hz refresh rate. 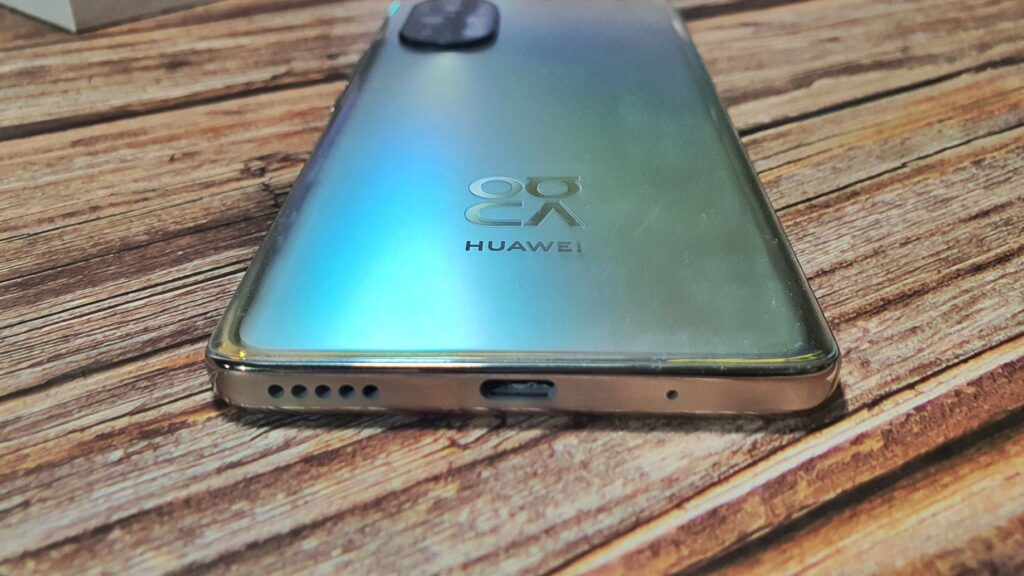 To be fair, the Huawei nova 8 punches way above its weight class in terms of build quality with a fit and finish that can match a flagship phone. With a metal frame and backplate along with a luscious looking display, the  nova 8 makes for a beautiful phone indeed though it lacks any water resistance rating which means some care is needed when taking it outdoors.

In terms of accessories, our Huawei nova 8 review sample comes with a 66W fast charger which is somewhat of a rarity for mid range phones along with the accompanying USB-C charging cable and a soft TPU casing to protect the phone. Of note is that Huawei has also pre-applied a screen protector on top of the display which saves a bit of cash.

In terms of hardware, the Huawei nova 8 is intended as a mid range phone. Powering the phone is a Kirin 820E processor which seems like a dialled down variant of the 820 5G that saw service in the nova 7 SE last year.

Under the hood, the phone runs on their EMUI 12 user interface based on Android 10 with their own AppGallery for sourcing apps. Connectivity is capped at 4G LTE, WiFi 5 (802.11ac) and Bluetooth 5.0 which keeps it current but isn’t particularly future proof as it lacks 5G.

Complementing this is 8GB RAM and 128GB of built-in storage which are somewhat modest for its price range but the lack of expandable storage means that you will need to be fairly frugal or ruthless with storing content on the phone though this amount of storage should be sufficient for casual use users. Here’s a summary of what it has to offer in one handy chart:

In terms of benchmarks, the our Huawei nova 8 review sample managed to score the following:

Overall performance is sufficient for a mid range phone but not what you’d consider as particularly stellar though it demonstrably outclasses the performance of the nova 8i by almost double in synthetic benchmarks which goes some way to justifying its admittedly high price point for a non-5G capable phone at RM1,899.

In terms of gaming, the phone is able to competently handle most popular games like Genshin Impact and PUBG at medium to low settings and web browsing is pleasantly swift along with relatively fast switching between apps.

The provided 90Hz OLED display is pleasantly bright with vibrant colour rendition and good clarity even under daylight conditions. When set on Dynamic mode, the screen refresh rate is primarily set to 90Hz for web browsing and some supported games to ensure smoother animations though you can dial it down to 60Hz and also reduce the screen to HD resolution to save on battery life. 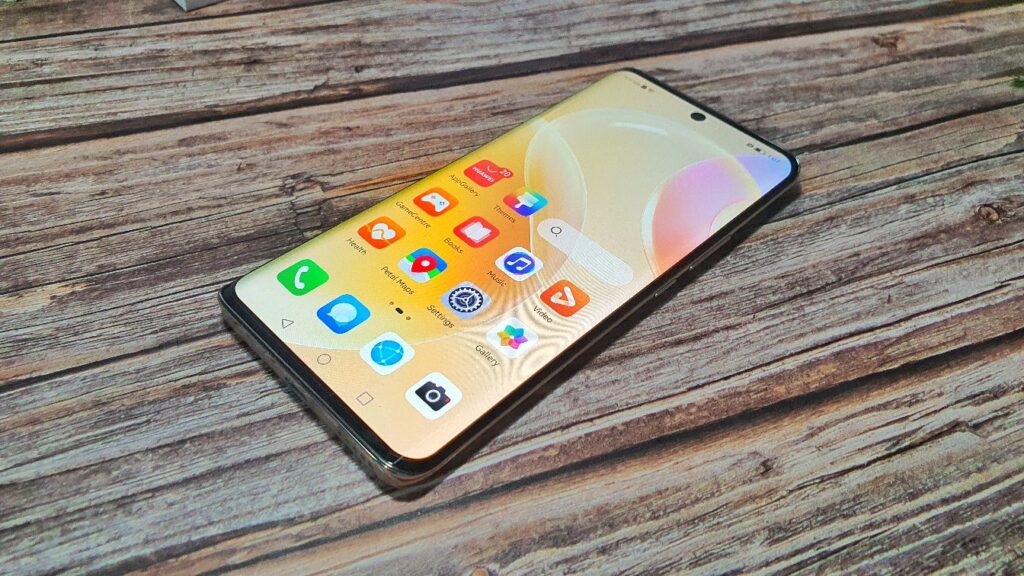 While the screen is punchy and bright, the mono speaker at the base is underwhelming at best with fair clarity and middling detail. There are better contenders with stereo speakers in this price range like the Galaxy A52 5G.

Battery life with the nova 8i is above average with a day and a half of average usage which is borne out in PCMark’s battery life test which yielded 11 hours and 12 minutes of use. Huawei has fortunately kitted the phone out with a fast 66W SuperCharge charger so you’re able to juice it from dead zero to a full charge in about an hour and a half which is a decent speed.

The latest iteration of Huawei’s own EMUI 12 has a few modest refinements in terms of its accessibility and design though they aren’t very obvious to casual users.

As with other Huawei devices of late, the phone lacks Google Play store support and you’ll have to resort to the AppGallery to gain most of your apps. Unfortunately, the most recent version has an irksome pop-up ad that can’t be skipped the moment you turn it on before you can even gain access to AppGallery.

If an app is not available, you’ll have to resort to their Petal Search feature which will inevitably point you towards a third party app repository like ApkPure though the potential for sideloading a version of an app that doesn’t work is there so you’ll still need quite a bit of experimentation.

By default, they also preinstall a bunch of shortcuts to a series of suggested apps though you’ll need to manually download them if you’re keen. Unfortunately, the suggested apps are a mixed bag with somewhat inconsistent quality.

To be fair, the more important stuff like Shopee, Lazada, Grab and MySejahtera are all working and most Gmail as well as YouTube can be accessed through a browser. Casual users will benefit the most versus those who have already been fully invested in Google’s ecosystem and there’s enough apps here to get the job done.

The Huawei nova 8 has a quad rear camera array built up around a primary 64MP F/1.9 camera with phase detection autofocus (PDAF), a secondary 8MP F/2.4 ultra wide angle camera, a 2MP depth camera and a 2MP macro camera with the ability to take up to 4K video. The front features a 32MP F/2.0 camera that can also take 4K video.

One thing to note is that none of the cameras have optical image stabilisation hardware built-in so you’ll either need a gimbal and steady hands to derive viable results especially for video work. There’s some measure of electronic image stabilisation but like many other mid range camera setups, it only works at about 1080@30fps and is disabled at 4K video resolution. 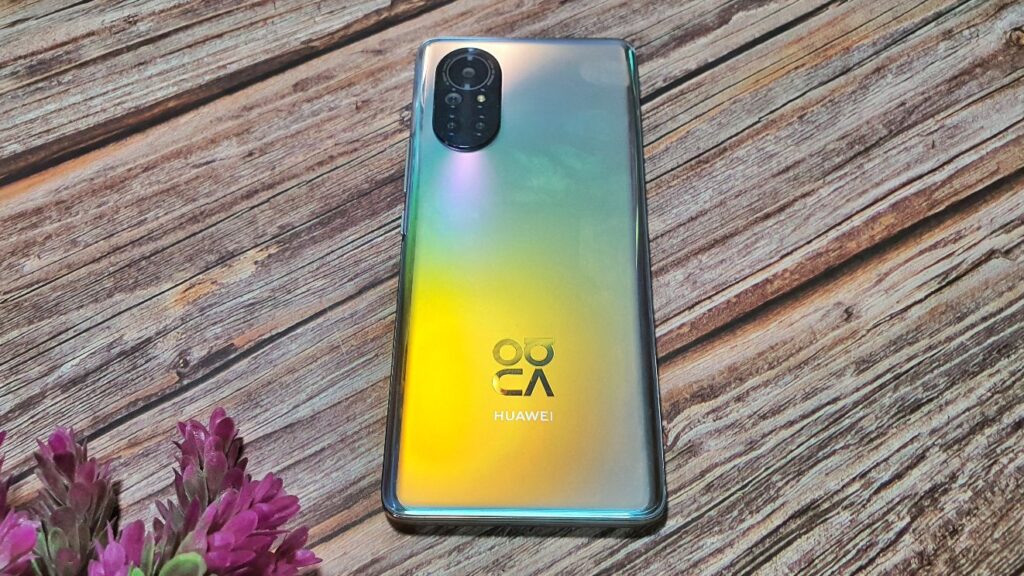 Under daylight conditions, shots from the ultra wide angle and primary camera offer a fair amount of detail, good dynamic range and colour rendition though things tend to nosedive after sundown or in dim light with soft grainy shots and poor detail.

The front 32MP selfie camera fortunately is one of the better ones in the market and while it lacks a built-in flash, it’s able to use the screen as an ad hoc flash for brighter selfies and videos.

Videos are serviceable in 1080P with some level of image stabilisation by cropping the sensor while offering digital zoom at up to 6x though this isn’t advisable as the zoom itself is noticeably jerky when swapping magnification. Results are best under daylight conditions much like the photo stills with shots in low light resulting in soft, grainy footage.

Seeing the nature of its cameras, the nova 8’s forte is primarily as a vlogger phone with markedly better performance for video calls and live streams than the rear.

Should you buy the Huawei nova 8?

The Huawei nova 8 is a mid-range vlogger-oriented phone that offers a number of distinct advantages that include a premium design that can match any flagship phone, a 90Hz OLED display and fast 66W charging. If you can live with the lack of Google services, the middling rear cameras and want a premium looking Huawei phone with a vlogger centric outlook, the Huawei nova 8 is worth a look. 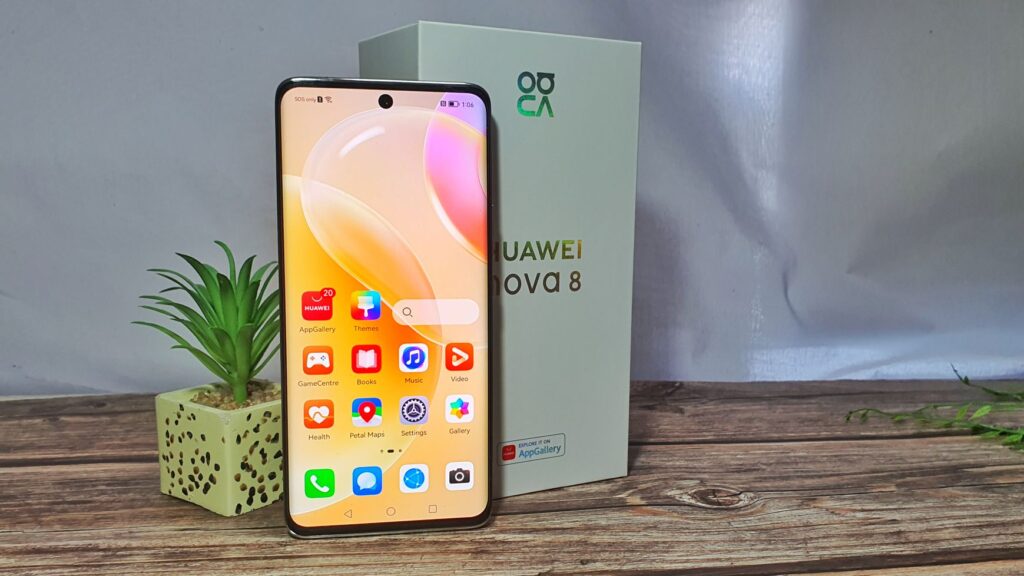 The Huawei nova 8 brings an attractive design, fast 66W charging, a slick looking 90Hz curved display and fair performance at a premium price tag. If you can live with the lack of Google services and want a premium looking Huawei phone with a decent front-facing selfie camera, the nova 8 is worth a look.

66W charger supplied in the box

Only has mono speaker