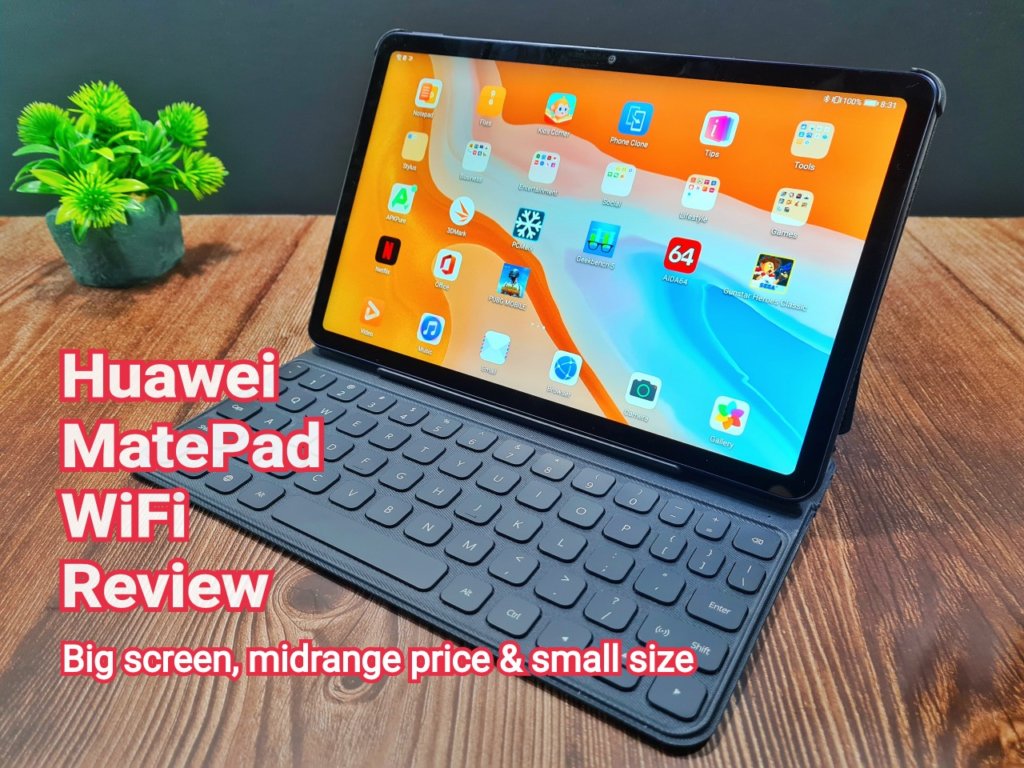 The Huawei MatePad WiFi aims to be an affordable sub-RM1,500 option that bundles in a large 10.4-inch slate with a keyboard to offer a modicum of functionality to crunch paperwork and consume content on the go.

Staying connected these days isn’t an option, it has become an absolute necessity, one that was put to the test in the wake of the ongoing pandemic.

The new normal has also brought about new ways of working and Huawei’s forays into making tablets have borne fruit with their rather popular MatePad Pro doing the rounds in Malaysia though it didn’t come cheap. For those looking to get much of the same experience at a more affordable price, the brand has issued a new alternative dubbed the MatePad.

The Huawei MatePad is a tablet running their EMUI 10.1 operating system based on Android and, like the MatePad Pro, is reliant on their own AppGallery for sourcing applications. 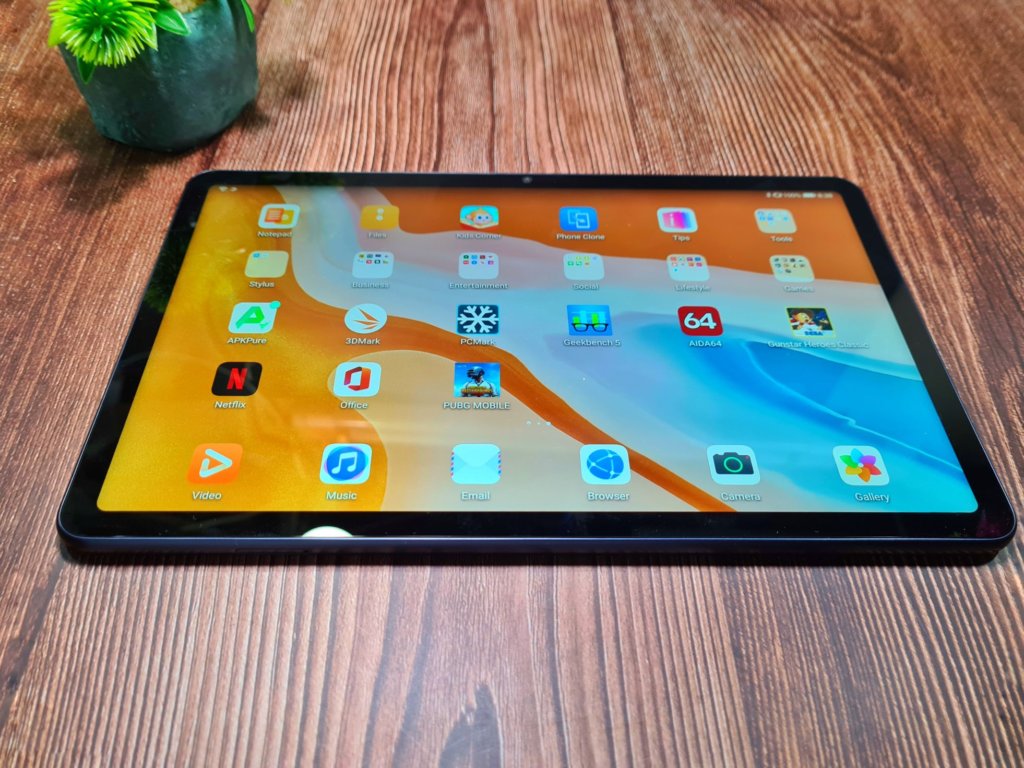 In terms of design, the MatePad is akin to the MatePad Pro save for a few key differences under the hood to make it more affordable. It weighs the same as the MatePad Pro at 460g but has a smaller and slightly lower resolution 10.4-inch 1,200 x 2,000 pixel display with 224 ppi whereas the Pro has a 0.4-inches larger display with a crisper 280ppi on account of much slimmer bezels.

The MatePad also has a slightly lower spec Kirin 810 processor and less RAM and storage with 4GB RAM and 128GB of storage. It also has the option to expand the modest storage via a microSD card. 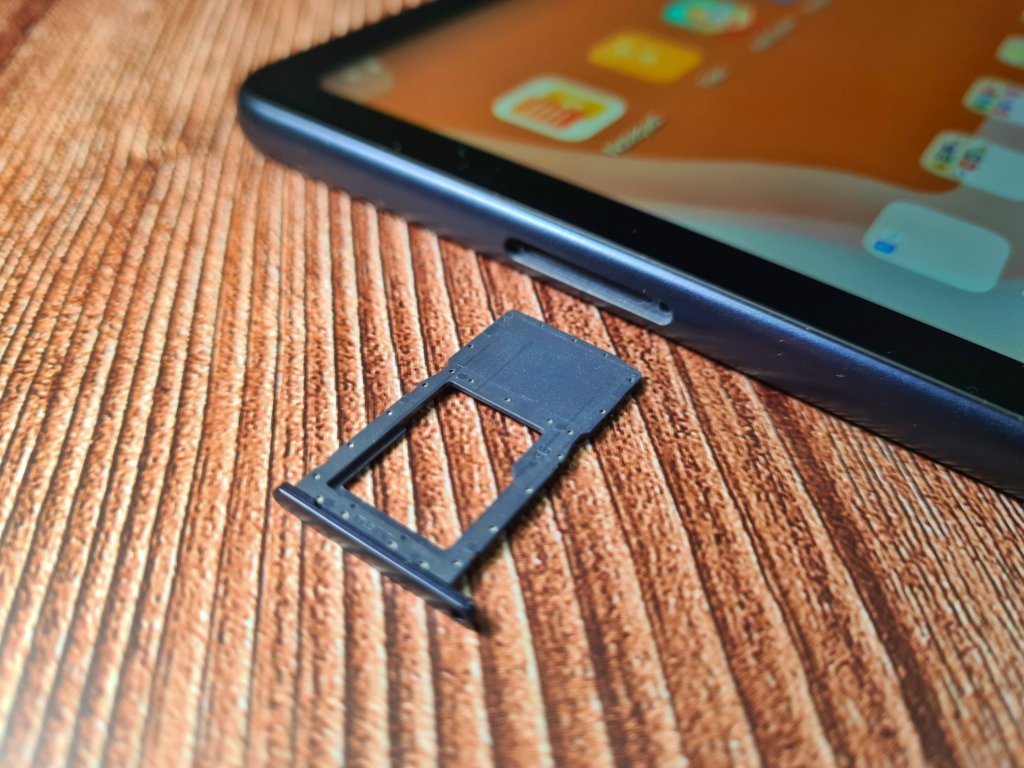 Two variants of the MatePad exist in Malaysia. One version of the MatePad has a nanoSIM card slot and 4G connectivity for RM1,399. The version that we’re testing is WiFi only but comes with the free keyboard cover that’s worth RM399 on its own. Both variants otherwise have the same colour – Midnight Grey, specifications and processor. 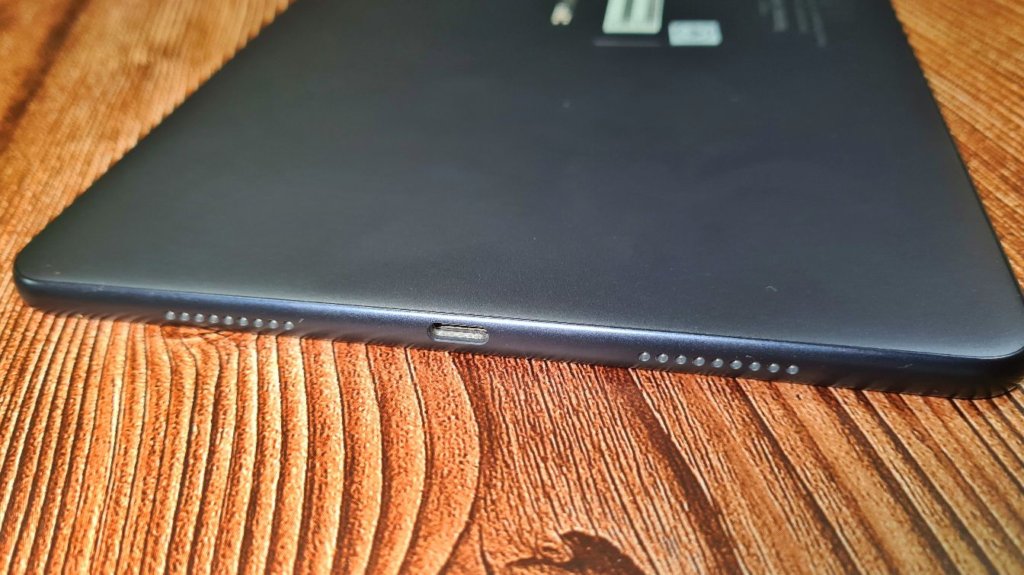 Up front, you get the aforementioned 10.4-inch LCD display that has an 8MP selfie camera up front embedded in the bezel. For a circa 2020 tablet, the bezels are somewhat on the chunky side but not overly so. Intended to be used primarily in landscape mode, the tablet has four Harman Kardon tuned speakers, with two on the left and on the right of the tablet. The right side also has a USB Type-C port for charging and docking duties while the left hosts a power button. The top side of the tablet has a volume rocker while the base has a microSD card tray.

The backplate comes done up in a matte greyish shade that Huawei has dubbed as Midnight Grey. At present, there are no other colour variants present in Malaysia. 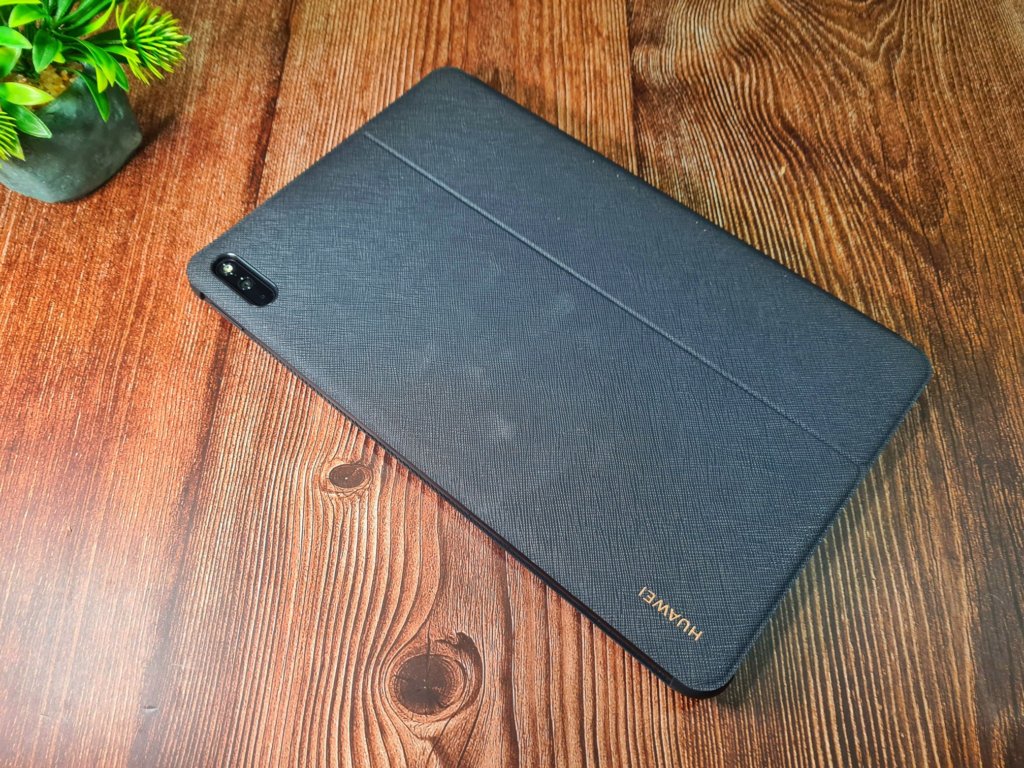 The MatePad WiFi ships with a free keyboard cover that acts as a stand, a cover and an alternative input device

Build quality is surprisingly good for its asking price with a metallic backplate and an even heft when held. The matte finish also handily repels fingerprints. The MatePad WiFi also notably ships with a free keyboard cover worth a decent RM399  that snaps on handily to the back of the tablet and offers the convenience of a stand, a protective cover and a keyboard in one convenient form factor.

The MatePad with 4G connectivity instead comes with a simpler, more conventional flip cover as a freebie. Both versions come with a free 15GB of Huawei Mobile cloud storage valid for a year along with 3 months of their free Huawei Video service and their Huawei Book ebook service valid until year end..

The Huawei MatePad WiFi is intended as an affordable midrange tablet and its hardware specifications fit the bill. You get a midrange Kirin 810 octacore processor built on a 7nm process with a pair of fast ARM Cortex-A76 2.26GHz cores for intensive tasks and six ARM Cortex-A55 1.88GHz cores for otherwise general grunt work. 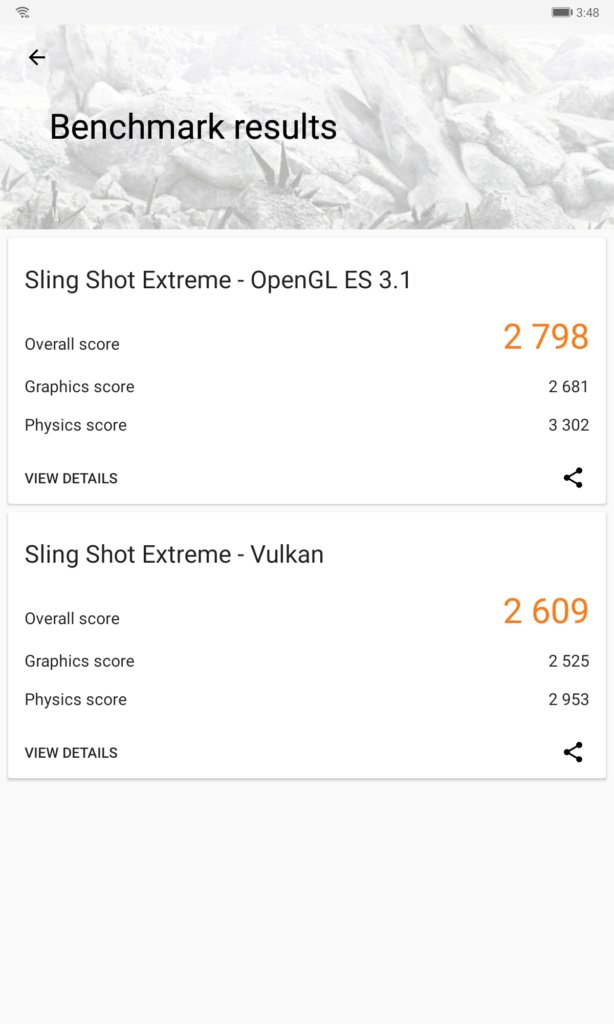 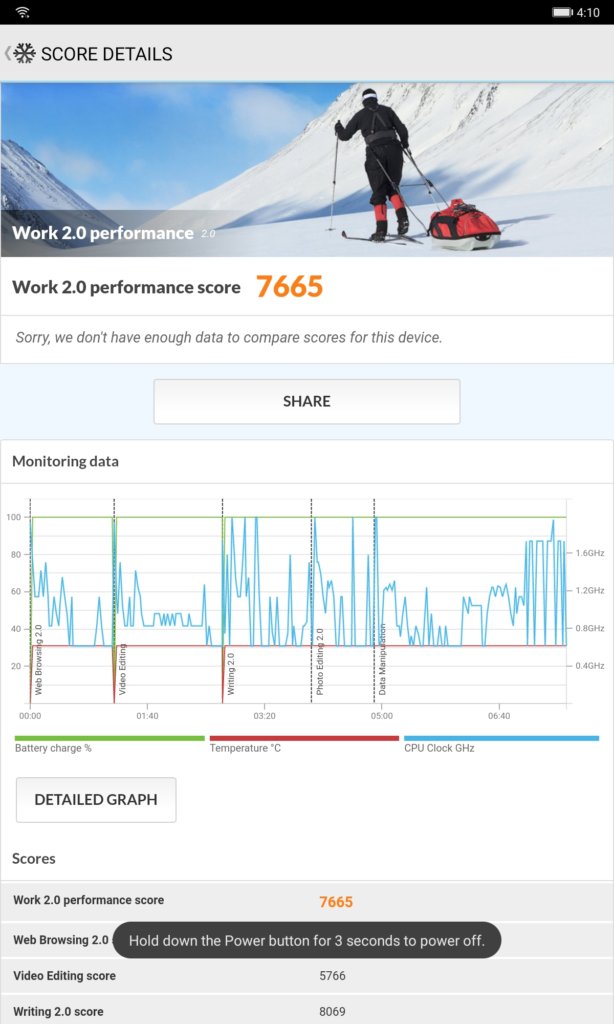 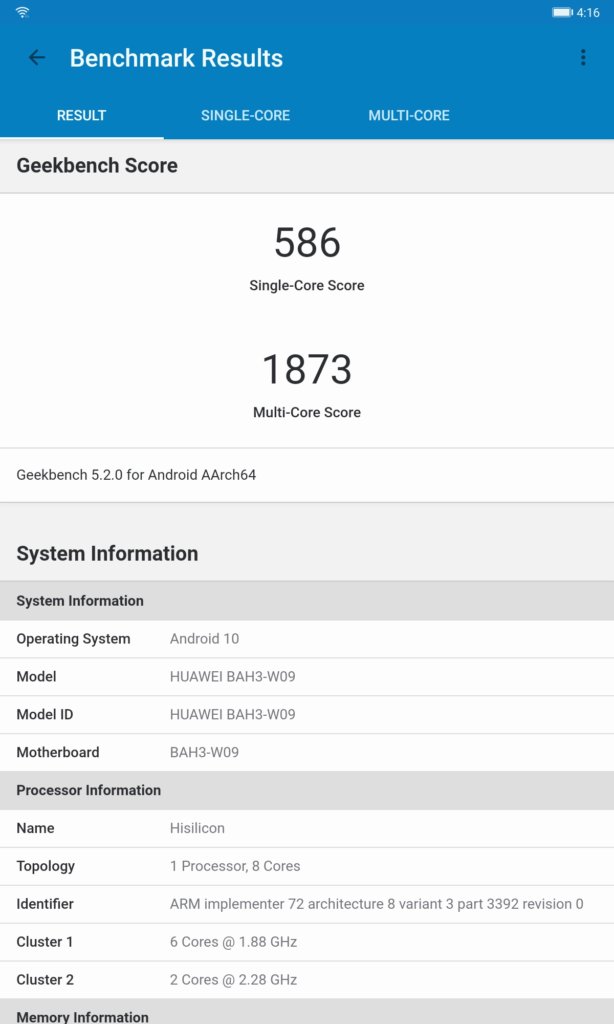 This is paired with an ARM Mali-G52 MP6 graphics solution. The slate also has 4GB DDR4 RAM and 64GB of onboard storage with 45GB in effective usable space minus the space taken up by the firmware.

Here’s what it has under the hood:

In terms of performance, the MatePad WiFi yielded the following synthetic benchmarks:

These benchmarks are markedly a notch down from the Kirin 990 in the flagship MatePad Pro and understandably so seeing the price difference and disparity in RAM at RM1,000 cheaper.

Day to day performance was sufficient for general usage and gaming with the ability to run PUBG on HD with High settings at a smooth frame rate without keeling over. Other apps like Microsoft Office and Huawei’s built-in browser ran smoothly without issue.

Screen quality for the MatePad is pretty good with fair, if not stellar viewability under daylight scenarios at maximum brightness. The display has a slightly lower pixels per inch (ppi) than the MatePad Pro and a refresh rate capped at 60Hz but it’s more than enough to enjoy movies, gaming and paperwork in a satisfactory fashion. 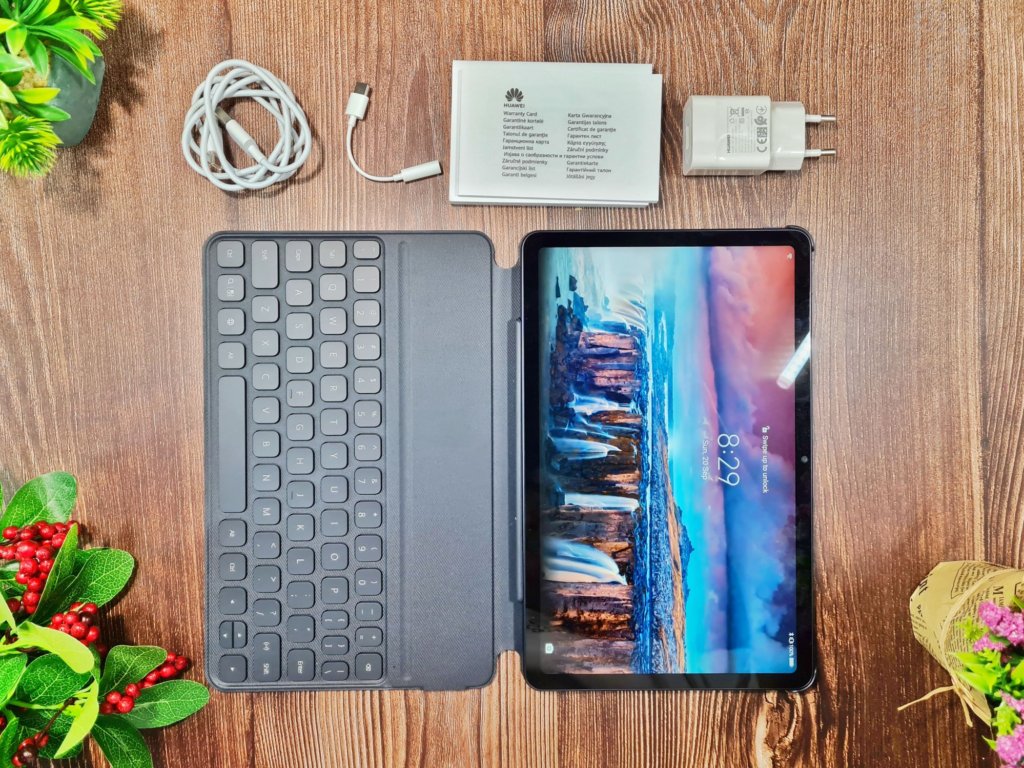 The box contains the usual charger and USB cable as well as a 3.5mm to USB Type-C jack if you want to use wired headphones

Seeing as this is a tablet, the front and rear cameras aren’t going to match even a midrange phone like the nova 7 but the front camera is enough for video calls in the age of the new normal and the rear is enough to scan documents and the odd foodie shot or two.

While the lack of integrated connectivity is a bit of a downer, the MatePad WiFi has the advantage in that it ships with a free keyboard cover that’s specifically fitted to its exact dimensions. The smart keyboard for the MatePad has functionality akin to the smart keyboard that ships with the MatePad Pro including the NFC sensor on the right Shift key for Multi Screen Collaboration with a paired Huawei phone but some corners were cut. 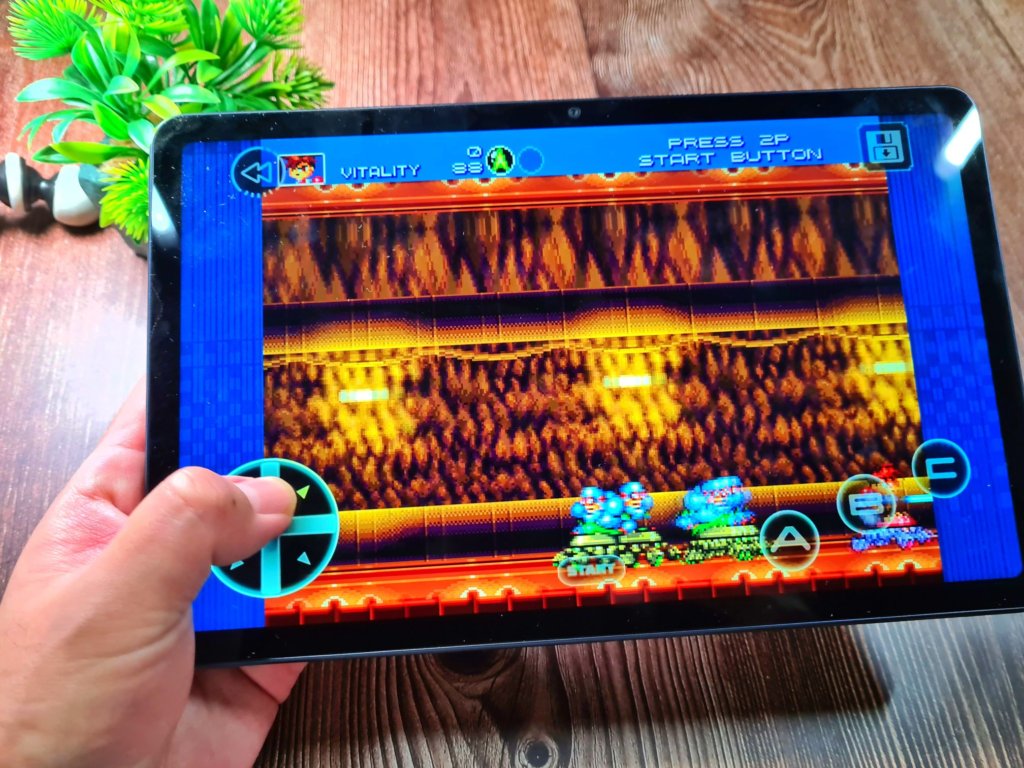 The other corner cut is that the support for the stand itself isn’t particularly sturdy; it’s actually a bit wobbly which is apparent when you’re poking at the touchscreen. Wobbliness aside, the keys are responsive, have a decent amount of travel and let you hammer out a good chunk of text and answer emails in short order. 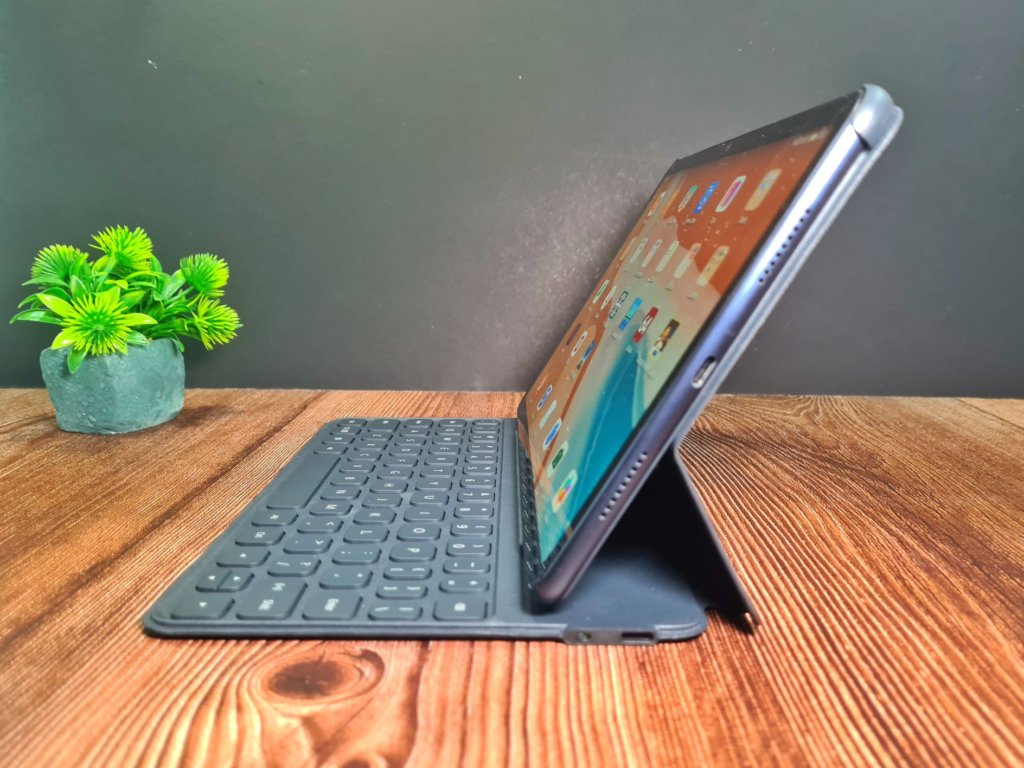 Of note is that the MatePad WiFi also has support for Huawei’s own M-pencil stylus though this is not bundled with the tablet and is instead sold separately.

Battery life on the large 7,250mAh was pretty good with easily two days worth of battery life with moderate use for paperwork and web browsing duties and a couple of hours of video. With heavy usage and the screen on maximum brightness, we managed to run through the entire first season of Breaking Bad with a comfortable 34% left on the battery in about six or so hours of active screen on time which is quite a feat all things considered. Standby time is excellent on account of the efficient Kirin 810 CPU and even with 10 hours of idle standby, the battery only dropped just 3%.

Charging it with the provided 10W charger took 4 hours for maximum charge from dead zero which isn’t the fastest on the block but is understandable seeing the size of the MatePad WiFi’s battery. 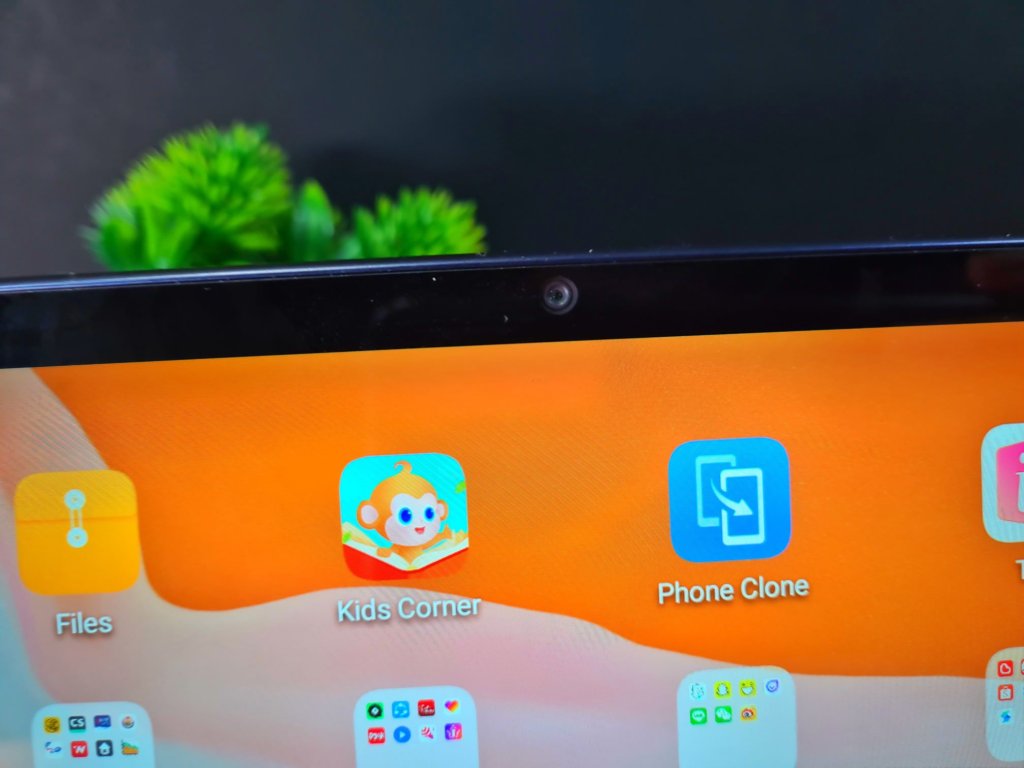 Running the show on the slate is their EMUI 10.1 firmware with apps sourced from the AppGallery. Much like their other hardware of late, the tablet lacks access to Google services so a number of apps that you’d typically be familiar with like Google Maps, Docs and others of that nature rely in some part on Google’s back end services aren’t officially available on the tablet.

Fortunately, Huawei has taken significant strides to resolving that conundrum and their AppGallery officially has almost all the apps that Malaysians would typically require for day to day work and play.

There are banking apps from all the major players, your usual array of entertainment apps including Netflix as well as loyalty apps that include Fave, Boost and the like. Of particular interest are the array of alternatives in lieu of Google Docs, Google Maps and the like as they have managed to come up with alternatives that work. 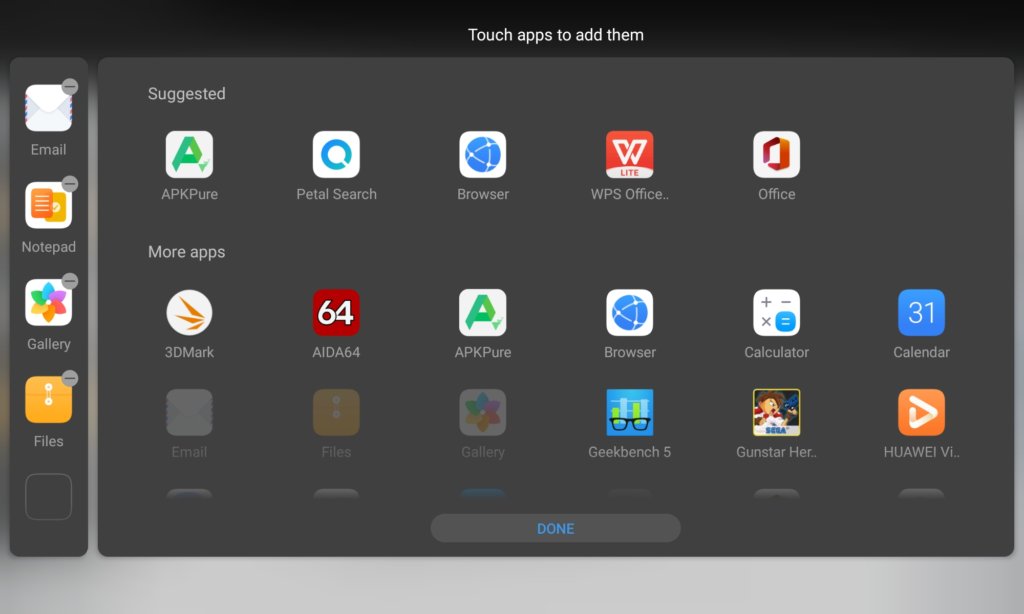 Like other EMUI devices, you’re still able to watch YouTube via a browser or use their Huawei Video app which has their own line-up of content which features a whole slew of Chinese dramas and shows, many of which fortunately have English subtitles.

Huawei’s EMUI features all the same tricks and features that the MatePad Pro has including their App Multiplier feature which lets you display an app in two windows for added functionality though this is still limited to a small pool of apps that include the Lazada shopping app.

If you really need to find a particular app that’s not available on the AppGallery, you can opt for their Petal search app which is preinstalled and attempts to point you in the right direction to third party app repositories. Should that measure go pear-shaped, you can opt for third-party app stores like APKPure though your mileage will vary as an app may not necessarily run if it relies on Google in some form or fashion.

The Huawei MatePad WiFi is an affordable tablet that offers excellent value on account of its large display, a good quad-speaker setup, long battery life and decent performance for enjoying content and web browsing.

It does a decent job for word processing and light work duties too in tandem with the bundled keyboard though the lack of Google services is still a bit of a downer. Nevertheless, the MatePad WiFi remains one of the cheapest tablets of its size with a bundled keyboard in the market, making it a viable choice for those on a tight budget though those with a bit more cash to spare can consider the Galaxy Tab S6 Lite which is a pricier, Android-packing alternative for RM300 more.

What we liked Good build quality, excellent battery life, decent performance, bundled with Type-C to 3.5mm dongle, responsive keyboard
What we didn’t no built-in 3.5mm audio jack, keyboard cover a bit wobbly, still need to jump through multiple hoops to get the apps you want
We say The Huawei MatePad WiFi is an affordable tablet that offers excellent value on account of its large display, a good quad-speaker setup, long battery life and decent performance for enjoying content and web browsing though the lack of Google services is still a bit of a downer.

The Huawei MatePad WiFi is an affordable tablet that offers excellent value on account of its large display, a good quad-speaker setup, long battery life and decent performance for enjoying content and web browsing though the lack of Google services is still a bit of a downer.