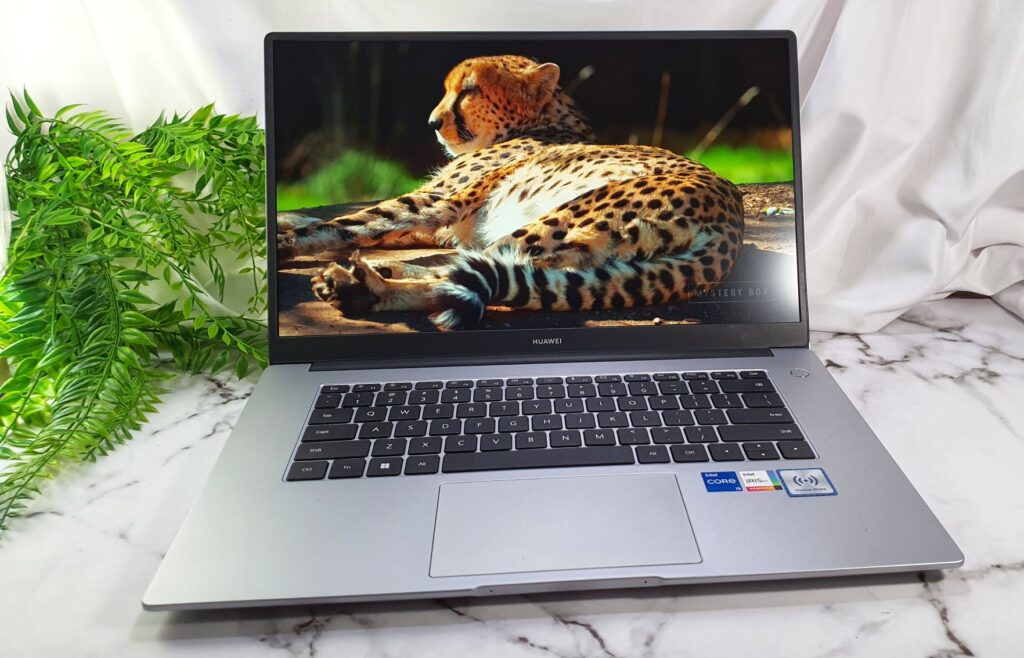 The latest incarnation of the Huawei MateBook D 15 for 2022 features a number of modest upgrades that include an update to Windows 11 Home out of the box and two variants with one offering double the amount of RAM with the 8GB RAM/512GB version costing RM3,099 and the 16GB RAM/512GB at RM3,399 but are they any good? Here’s our Huawei MateBook D 15 2022 review where we put it to the test! 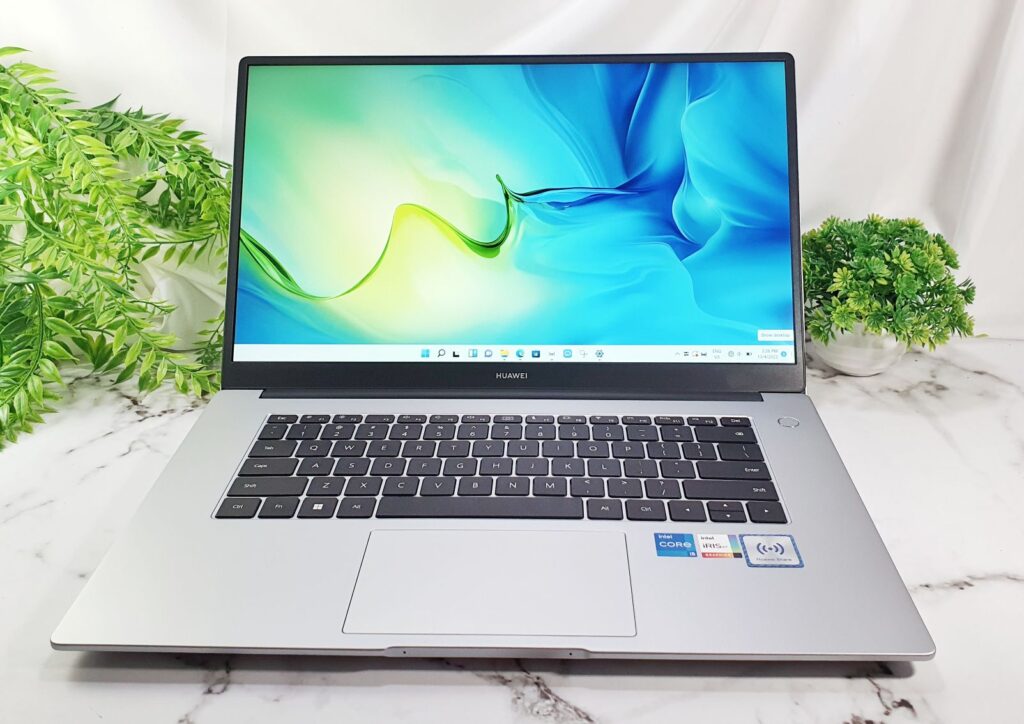 In terms of form factor and design, our Huawei MateBook D 15 2022 doesn’t differ much from the earlier version that we reviewed with a similar aluminium chassis and design. You get an aluminium top lid with the Huawei logo emblazoned on top, a similar aluminium-hewn keyboard tray and an underside made of polycarbonate for weight savings.

The underside itself has grilles for a pair of downward firing speakers and is held in place by a series of torx screws though there isn’t much to customise as the RAM is soldered in and it doesn’t have an additional M.2 SSD bay to add additional storage. A long grille that stretches across the length of the underside offers ventilation for the built-in Shark fin fan which is connected to a heat pipe to keep the CPU cool under heavy loads.

While it relies on the proven form factor of the earlier MateBook D 15 from 2020, it also has the same challenges as the design hasn’t been updated. 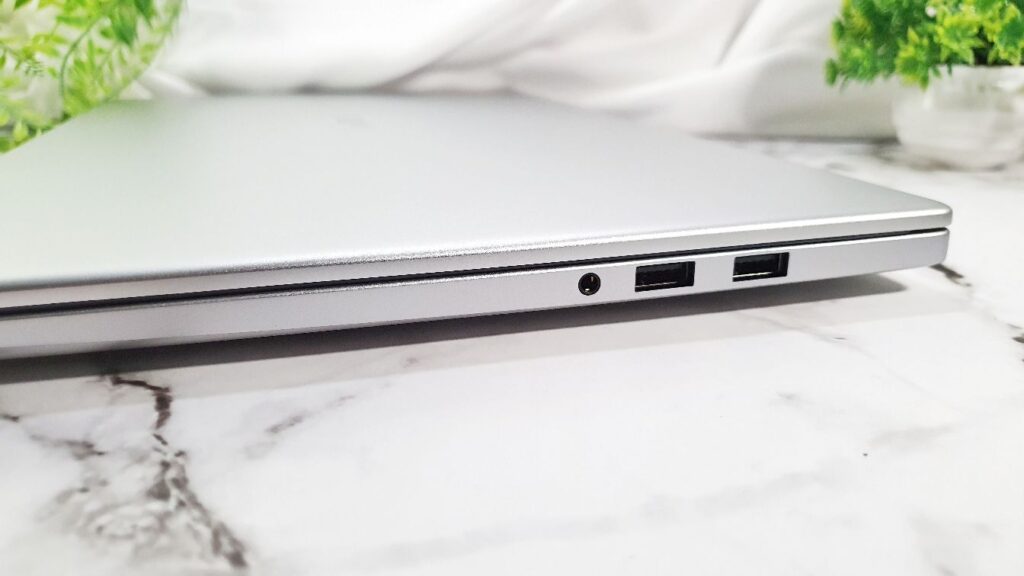 The left side has a USB-C port for charging that supports Huawei’s own 65W fast charging with the bundled charger, a USB 3.0 port and a HDMI 2.1 port while the right side hosts a pair of USB 2.0 Type-A ports and a 3.5mm audio jack for plugging in peripherals. Connectivity is sorted with fast WiFi 6 and Bluetooth 5. 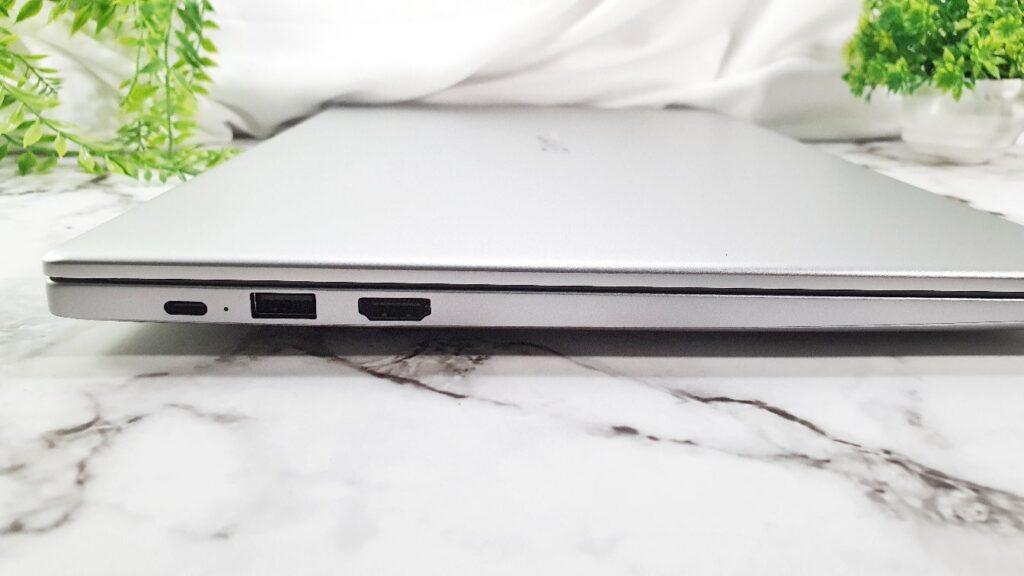 Flip the top lid open and you have a power button that doubles as a fingerprint reader, a Huawei Share NFC reader in the lower right palm rest, a keyboard and a generously sized touch pad. Inset between the F6 and F7 keys in the top keyboard row is a pop-up webcam hidden beneath a faux key. Much like prior versions, it shows a rather unflattering angle of the user during video calls and Huawei hasn’t tweaked this aspect of its design much.

One  quibble here is that the keyboard also lacks backlighting which means it isn’t ideal for use in dimly lit scenarios. Another quibble is that the provided Huawei Share feature really only works with Huawei’s own tablets and phones but if you do happen to own one, it connects in a swift fashion to transfer content and also for Multi-Screen Collaboration mode where you can have an instance of your phone on your desktop for easier multitasking.

The 15.6-inch Huawei FullView IPS LCD display itself has a traditional 16:9 form factor but hasn’t been updated with a higher refresh rate and is capped at 60Hz. The narrow 5.3mm thin side and top bezels afford it a relatively generous 87% screen-to-body ratio. The display also has Flicker-Free and Reduce Blue Light certification from TUV Rheinland which makes it easier to view for extended periods of time. 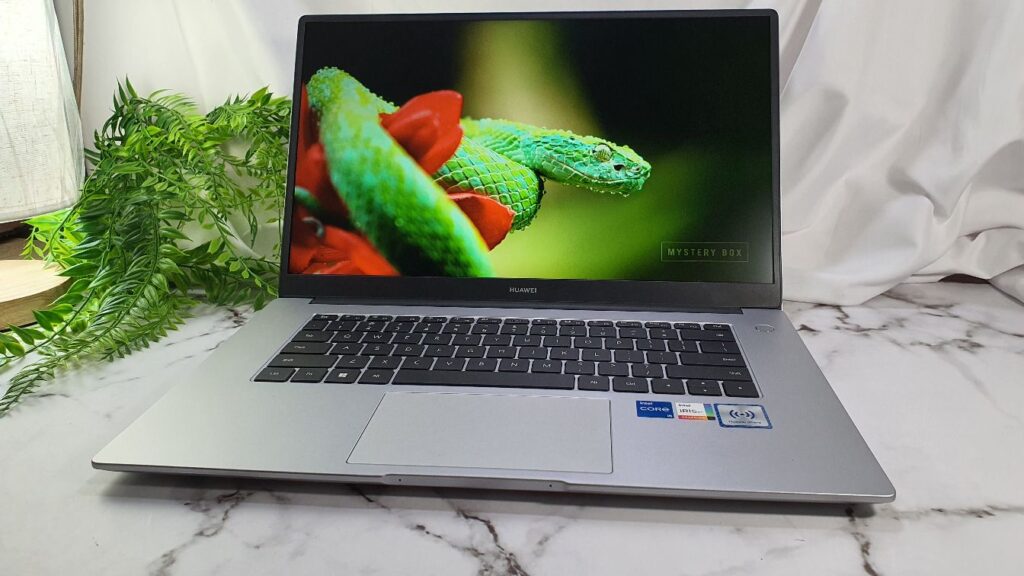 Overall build quality is sturdy without any give or play in the chassis and the hinge mechanism itself is sturdy and relatively free of wobble though you need two hands to open the top lid. As laptops go it’s relatively slim at 16.9mm thin and portable at 1.56kg though there are lighter laptops.

On paper, the Huawei MateBook D 15 2022 is mostly similar to last year’s model with an identical 11th Gen Intel Core i5-1135G7 CPU from the Tiger Lake generation with two subvariants that differ primarily in the amount of RAM they pack with your choice of either 8GB or 16GB of DDR4 RAM.

Our Huawei MateBook D 15 2022 is the former. Storage needs are taken care of by a 512GB SSD that’s been partitioned into a 128GB main drive for the OS and the rest for storage as a secondary drive.

You also get Irix Xe graphics. The other notable upgrade here is that the laptop runs Windows 11 Home out of the box supplemented by their latest version of Huawei PC Manager that lets you clip and share content and pair up easily with a Huawei phone or tablet of recent vintage.

Our Huawei MateBook D 15 2022 review sample has 8GB RAM versus the more powerful variant which is similar save for a more substantial 16GB RAM which affects benchmarks to some degree. Here’s how it stacks up:

After plugging it into the mains and dialling it up to Performance mode, we got the following synthetic benchmarks:

When deployed in Huawei PC Manager’s Performance mode by manually keying in the Fn and P keys and with the laptop plugged in, our Huawei MateBook D 15 2022 review sample performed in an admirable fashion and even under heavy loads, the relatively power efficient 11th Gen Core i5 CPU and Iris Xe graphics still kept ticking along smoothly on account of the Shark Fin fan.

Under practical workloads, our sample with 8GB RAM was able to tackle daily computing tasks without issue like web browsing with over a dozen open tabs on Chrome, Word documents and Excel spreadsheets as well as a bit of photo editing on the side though it’s certainly not designed for any serious video editing. On the bright side, it is able to handle some retro gaming and it ran Kingdom: Two Crowns and the usual online staples like CS:GO and DOTA 2 on low to medium settings.

If it works, don’t fix it, is the adage that Huawei is going by here and the 15.6-inch 60Hz IPS LCD display here retains similar performance to its predecessor with good viewing angles and a relatively bright and vibrant screen. 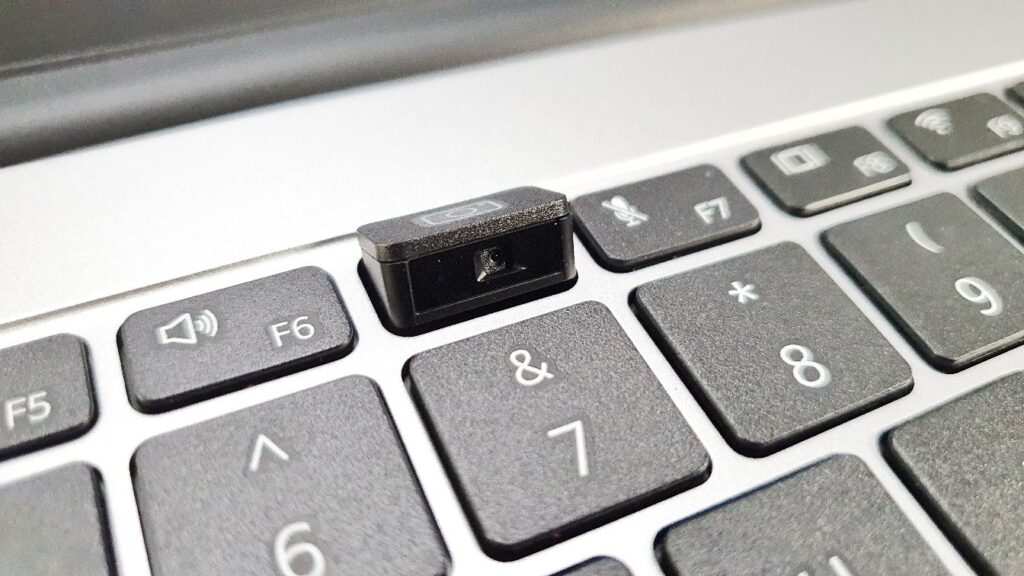 Huawei MateBook D 15 2022 Review – While it scores points for privacy, the keyboard mounted webcam has a somewhat unflattering angle for video calls

The addition of low blue light certification also ensures the screen is pleasant to view even at night without potentially affecting sleep cycles but the omission of a backlit keyboard is confounding indeed and would have been a welcome upgrade. The provided stereo speakers are relatively loud and serviceable but work best if it’s placed on a flat surface. 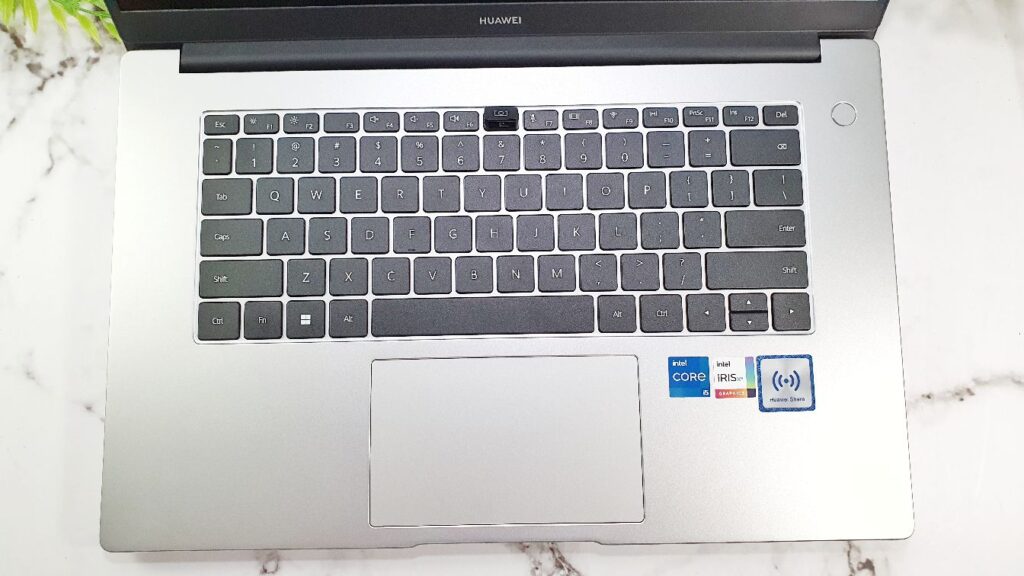 Battery life under balanced settings is fair but hardly stellar with about 7 hours of practical use with WiFi on and a moderate workload with web browsing, some video and paperwork for our Huawei MateBook D 15 2022 review sample.

This is reflected in PCMark 8’s Creative battery life test that also averages out at about 7 hours or so of endurance. In terms of endurance it’s sufficient for the better part of a work day with a top-up by early evening but the provision of a compact, fast charger means that it isn’t that much of an issue to juice it up in the field. 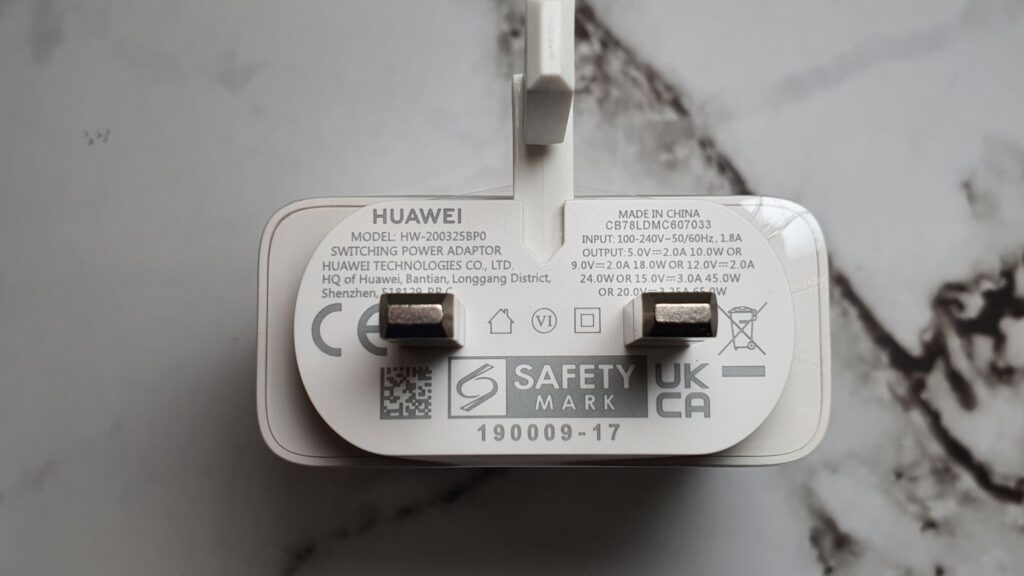 Fortunately, the provided 65W fast charger is compact enough to easily tote around in the field and can bring the laptop up from dead zero in about an hour to 80% or so and is capable of offering 2 hours of usage from a 15 minute charge.

If you’ve been holding off on getting a budget laptop for work and general duties, you’ll likely appreciate what the refreshed Huawei MateBook D 15 2022 model has to offer. It has a current, proven CPU and enough storage to handle daily tasks and if you’re fully invested in Huawei’s ecosystem, their Huawei Share feature is a compelling bonus. 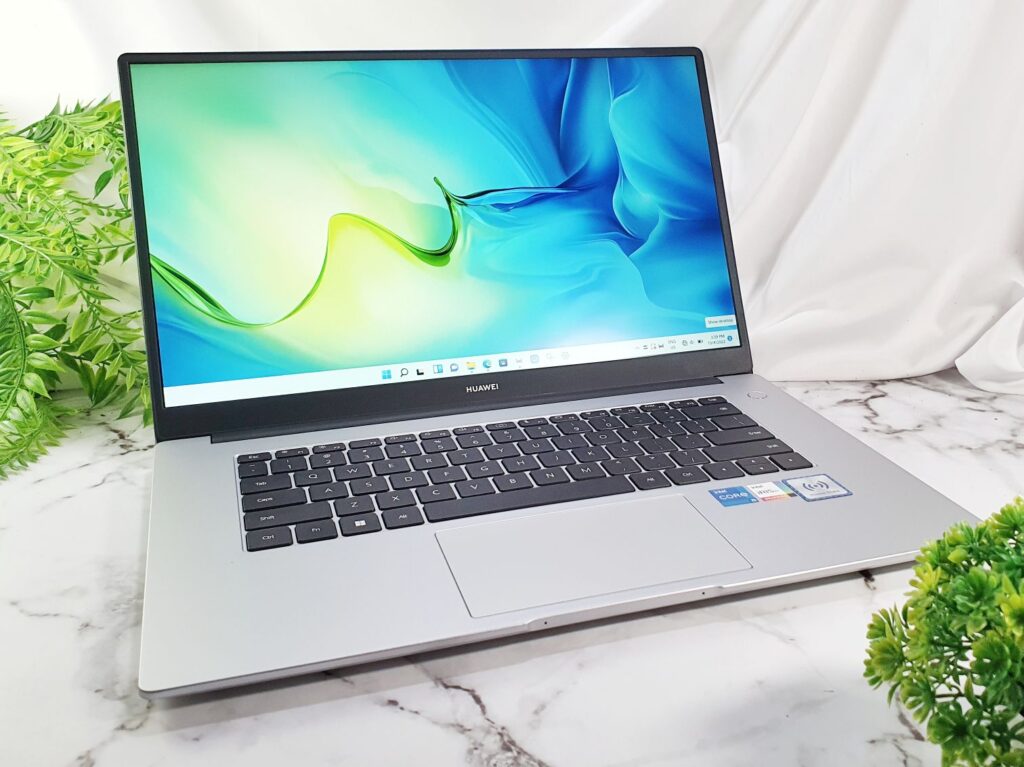 This is a great proposition for students and work-from-home executives who don’t handle heavy content creation and otherwise general computing. If you’re fairly fast on the draw, Huawei is offering a series of free gifts if you purchase the refreshed MateBook D 15 that include a free backpack, a free mouse and a free pair of Huawei FreeLace earbuds while stocks last which adds quite a bit of value.

The refreshed Huawei MateBook D 15 2022 features a number of modest improvements that help it retain its role as a relatively affordable workhorse with sufficient performance to tackle daily computing and paperwork without undue trouble. The conservative aspects of its design are still retained though and you get the unflattering view from its keyboard-mounted webcam but it’s otherwise a solid laptop.