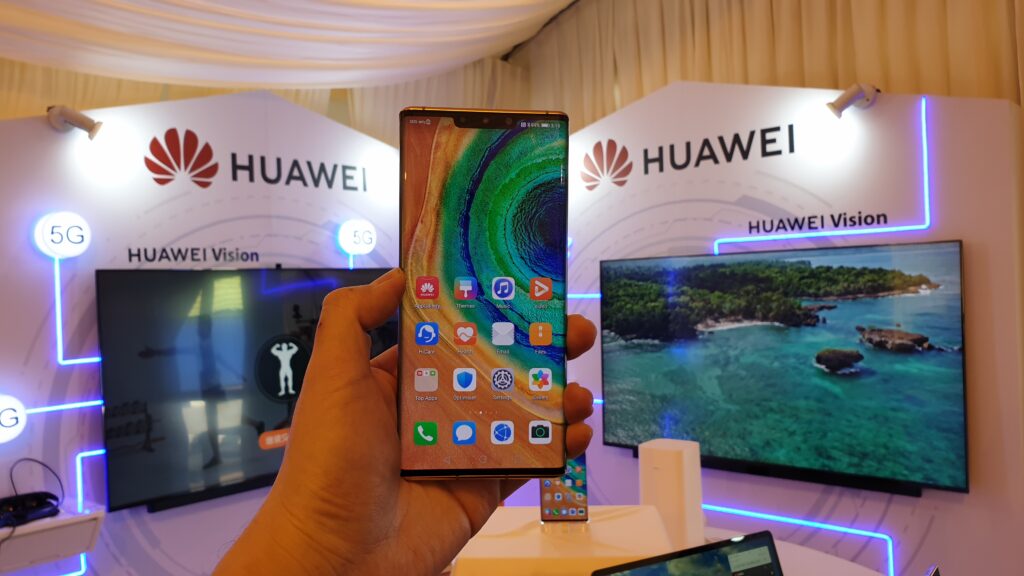 Langkawi island is now the hotspot for field tests of 5G technology by all the major telco players including Maxis and TM which is taking place in the shadow of the 5G Malaysia International Conference 2020. 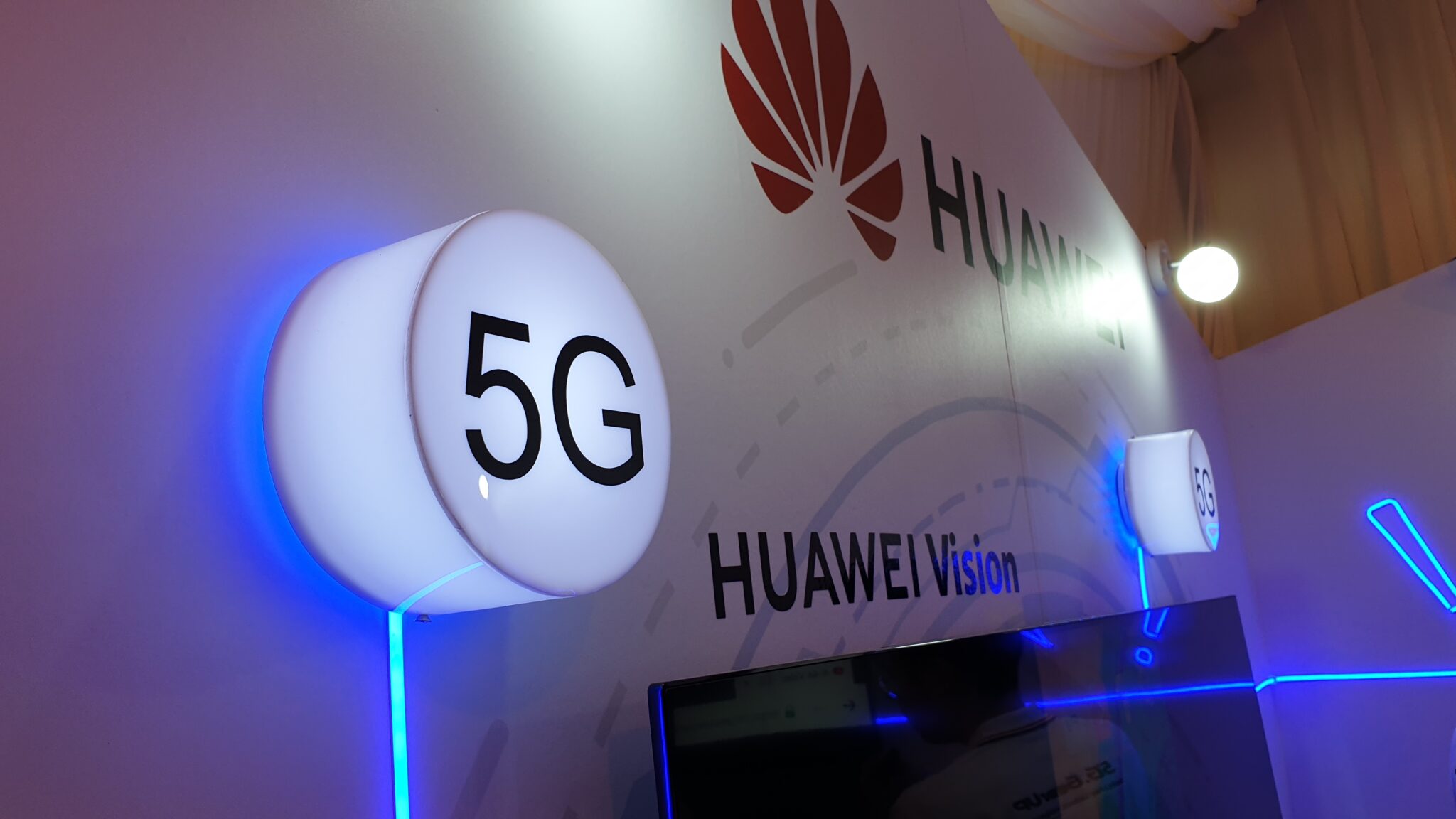 While all the buzz is on the implementation of 5G infrastructure, smartphone purveyor and telco tech provider Huawei was also onsite in Langkawi to allow invited guests and media to experience Malaysia’s first 5G certified phone – the Mate30 Pro 5G which we were also allowed to take for a whirl around town. 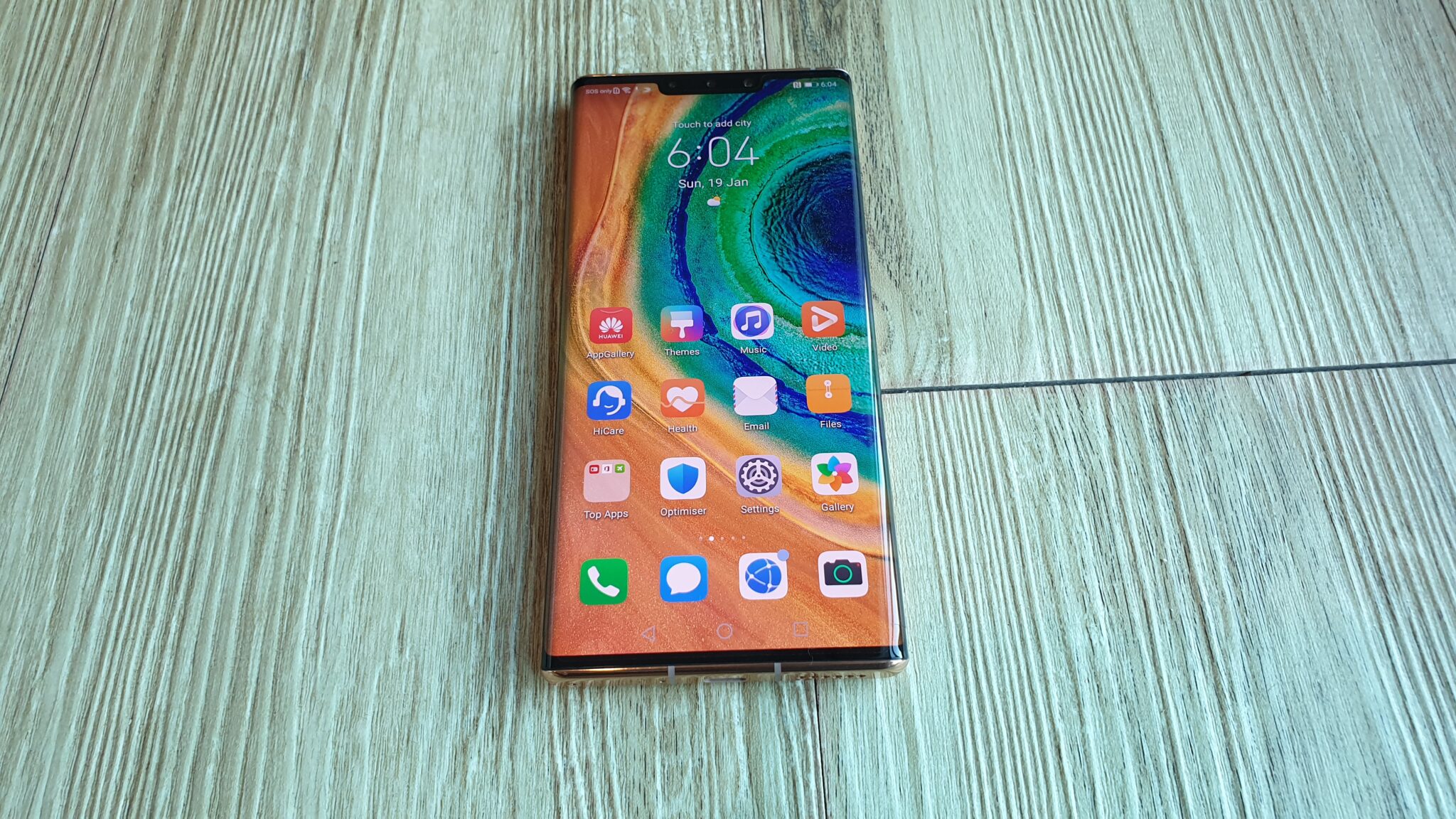 The Huawei Mate30 Pro 5G comes with similar packaging as the conventional Mate30 Pro with a matte black box that contains the smartphone itself wrapped in a protective plastic sleeve, a SIM ejector pin, a Type-C pair of headphones, a protective casing as well as a 40W Super Charge fast charger and paired USB Type-C cable. The only difference that you can tell from the external packaging is the manifest sticker on the side of the box. 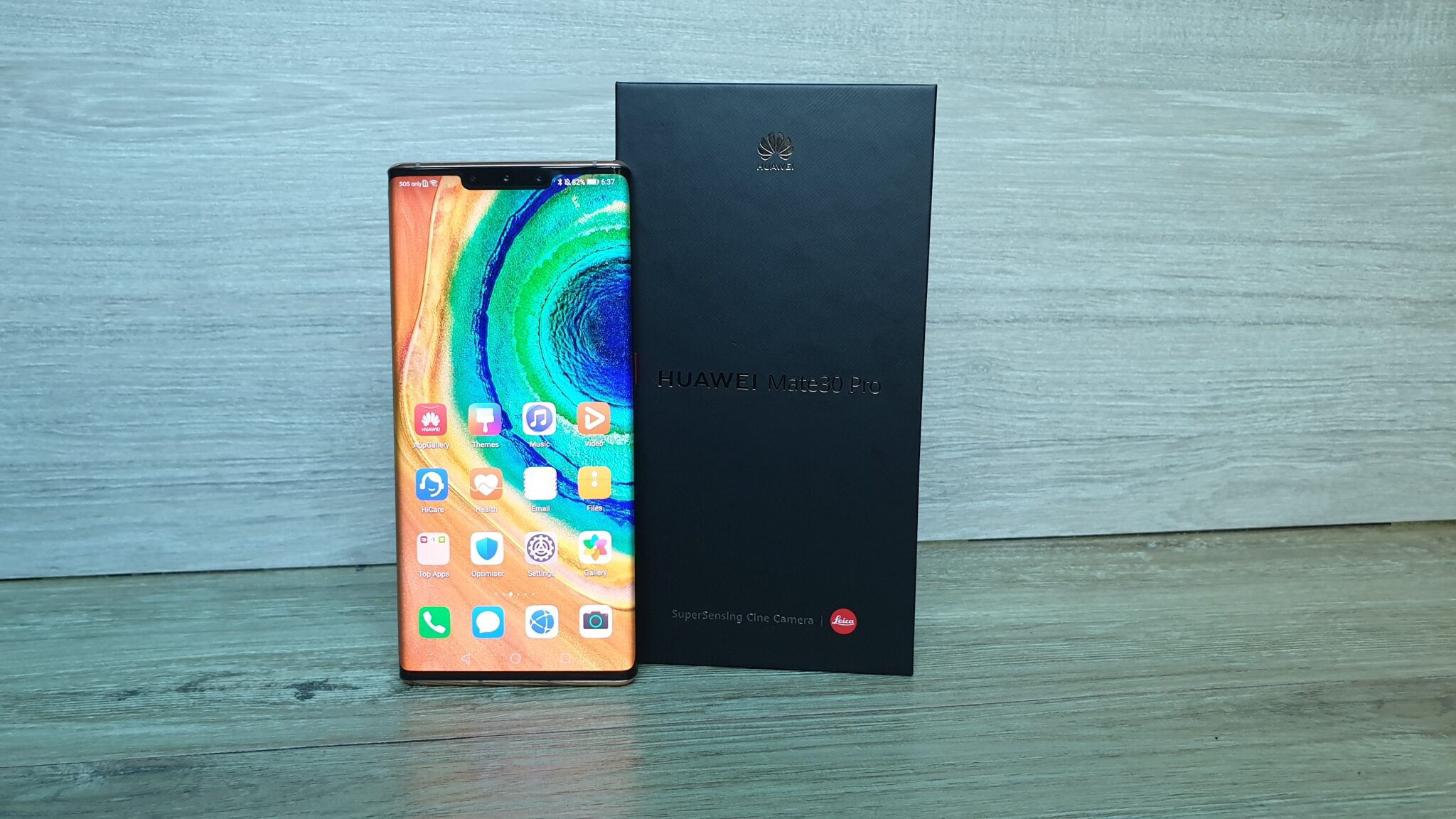 While our unboxing unit had a foreign 2-pin SuperCharge fast charger, units destined for Malaysia will have our usual 3-pin UK-style plugs with a similar amount of goodies crammed into the box. 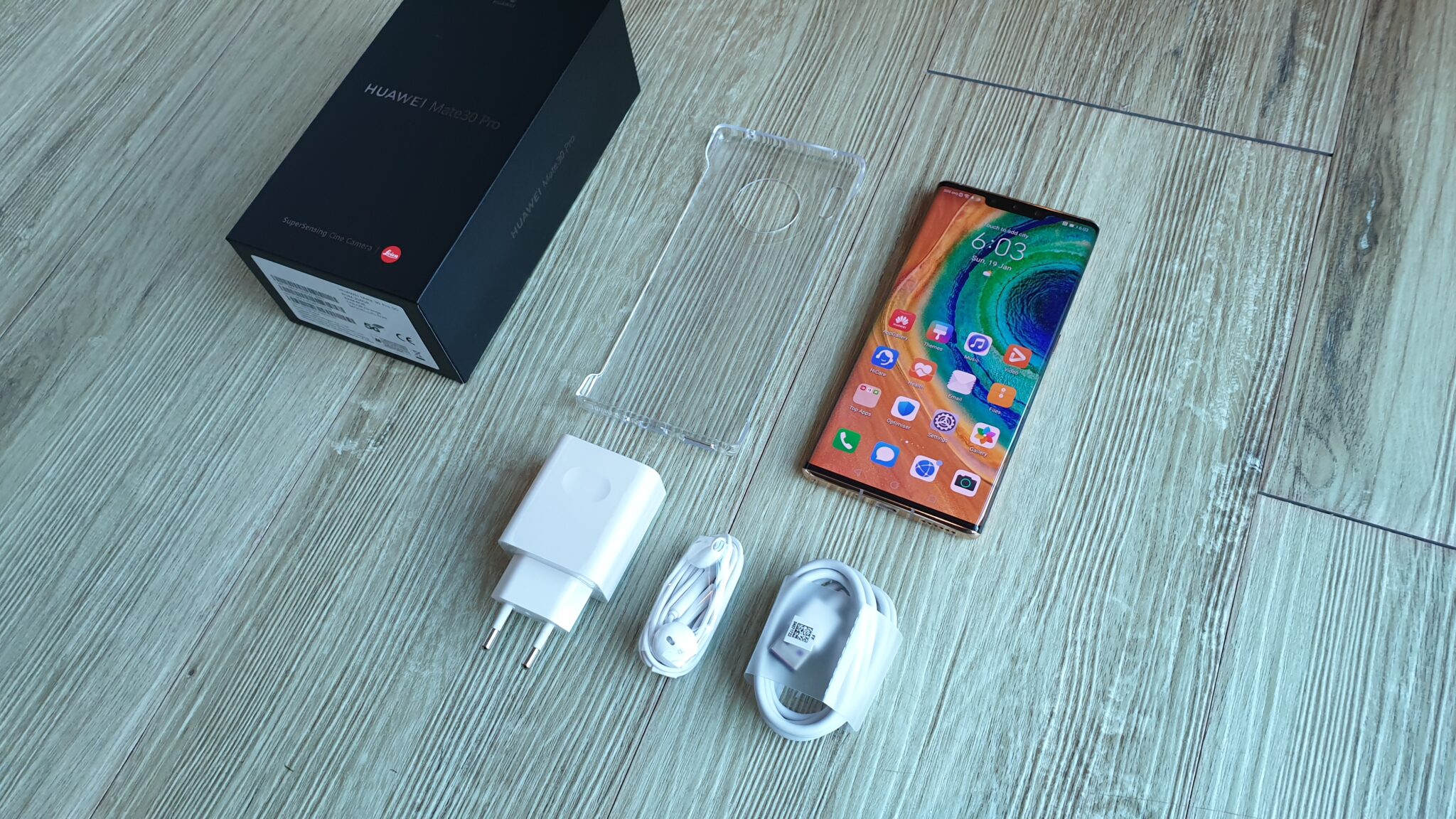 The Huawei Mate30 Pro 5G is externally similar to the more conventional Mate30 Pro which was released several months ago in terms of design though it comes with a uniquely different orange faux leather backplate that gives it a familiar yet quite different aesthetic from the conventional Mate30 Pro. On both phones, the iconic silver-rimmed round camera array is present and takes pride of place on the rear backplate. 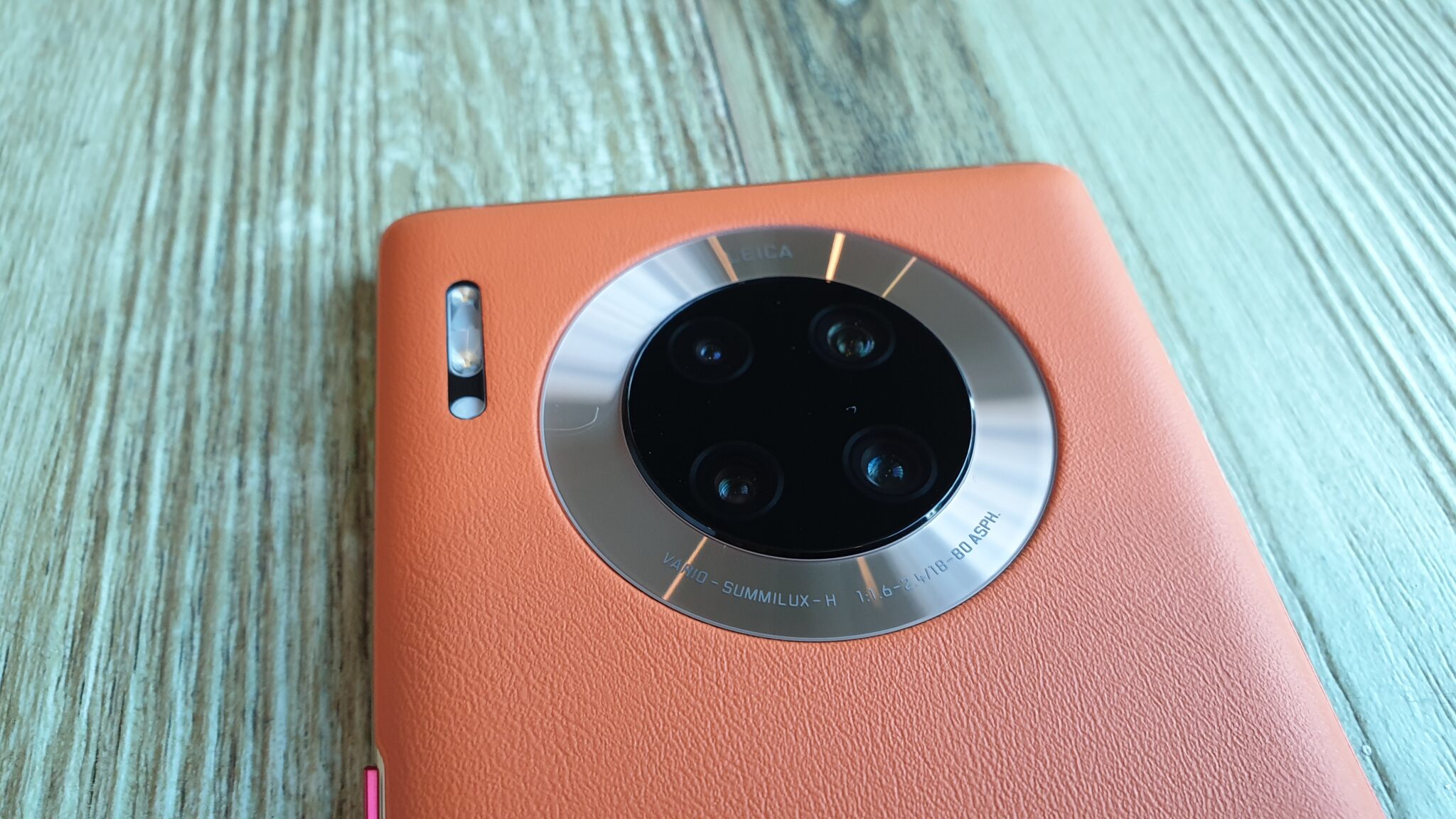 The biggest difference between the stock Mate30 Pro and the Mate30 Pro 5G is the inclusion of the more powerful Kirin 990 5G processor in the latter which is built on a more efficient 7nm+EUV process and which notably has a beefier NPU to tackle AI-related tasks for better performance, enhanced battery efficiency and image quality, especially under low light conditions with improved noise reduction. On paper, the In Signal Processing (ISP) has been beefed up by a significant margin as well to offer even better rendition of low light images than the conventional Mate30 Pro. 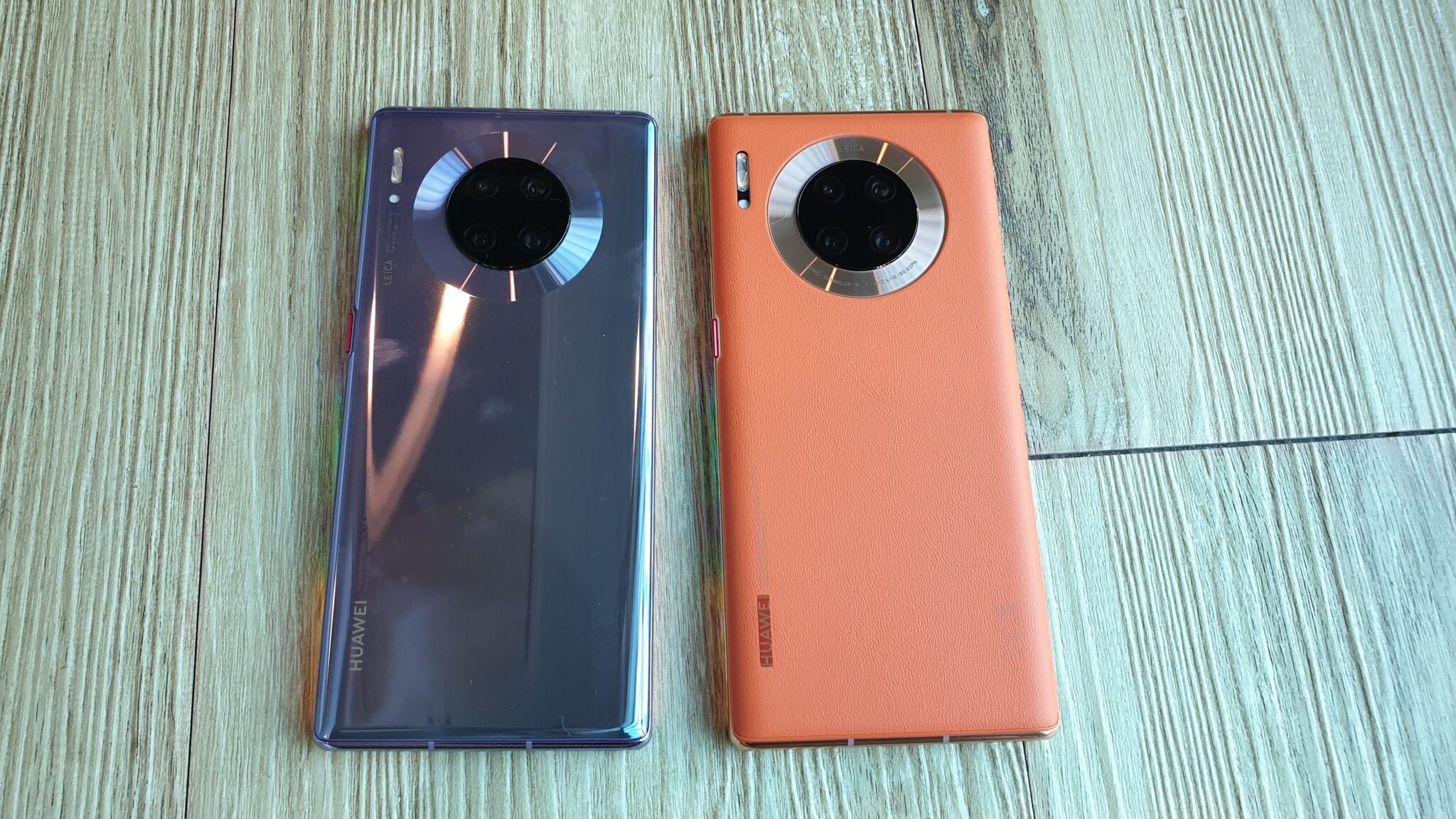 The rest of the hardware for the Mate30 Pro 5G is similar to its non-5G enabled sibling with a 6.53-inch FHD+ OLED display, 8GB RAM, 256GB storage and an identical Super Sensing CineCamera quad camera array that consists of a primary 40-MP F/1.6 camera with PDAF and OIS, an ultra-wide 40-MP camera with PDAF, an 8-MP F/2.4 camera with 3x optical zoom and a fourth 3D depth sensor.

The Mate30 Pro 5G keeps the lights on with a 4,500mAh battery that has 40W SuperCharge support along with the aforementioned bundled 40W SuperCharge charger. Of note is the fact that the Mate 30 Pro 5G, like many other Huawei phones of recent vintage is not able to use microSD cards and instead supports their own NM storage cards so you can augment the existing storage further by up to 256GB.

Functionally speaking, the Mate30 Pro 5G works similar to the conventional Mate30 Pro with an identical user interface and a reliance on Huawei Mobile Services for apps and the absence of the Google Play store. The ergonomics are similar as well with only a physical power button on the side and virtual side buttons to control volume.

We also managed to gave it a quick once-over with a few benchmarks and with Performance mode turned on, the phone delivered beastly performance indeed on PCMark, 3DMark’s Sling Shot Extreme – OpenGL ES 3.1 and Vulkan test as well as GeekBench 4.4.

In a word, blazing fast. In Langkawi, Huawei Malaysia demonstrated the Huawei Mate30 Pro 5G in a series of field tests that demonstrated a number of use cases, including a latency-free live video call, the ability to download 30 apps in mere seconds and several tests that showed impressive upload and download speeds.

4G speeds for the Mate30 Pro 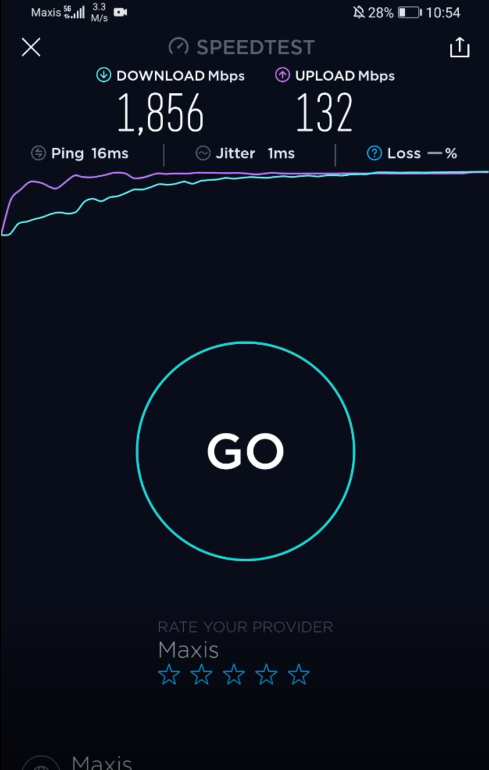 Via a TM SIM card connected via a Huawei 5G router, Huawei demonstrated the ability to download a 500MB file in mere seconds with up to 22.6MB/sec download speeds, allowing it to complete downloading a movie in mere seconds. 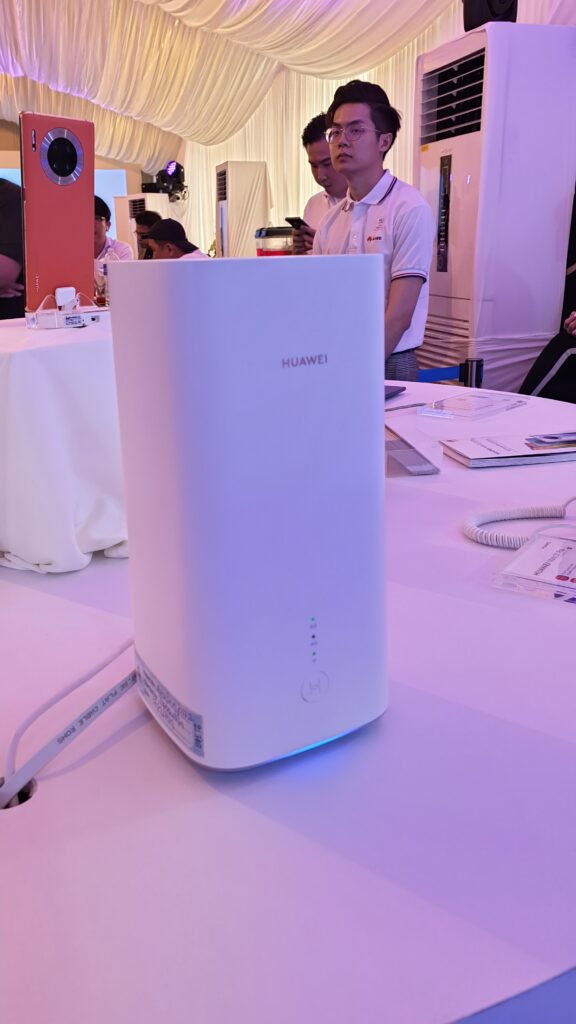 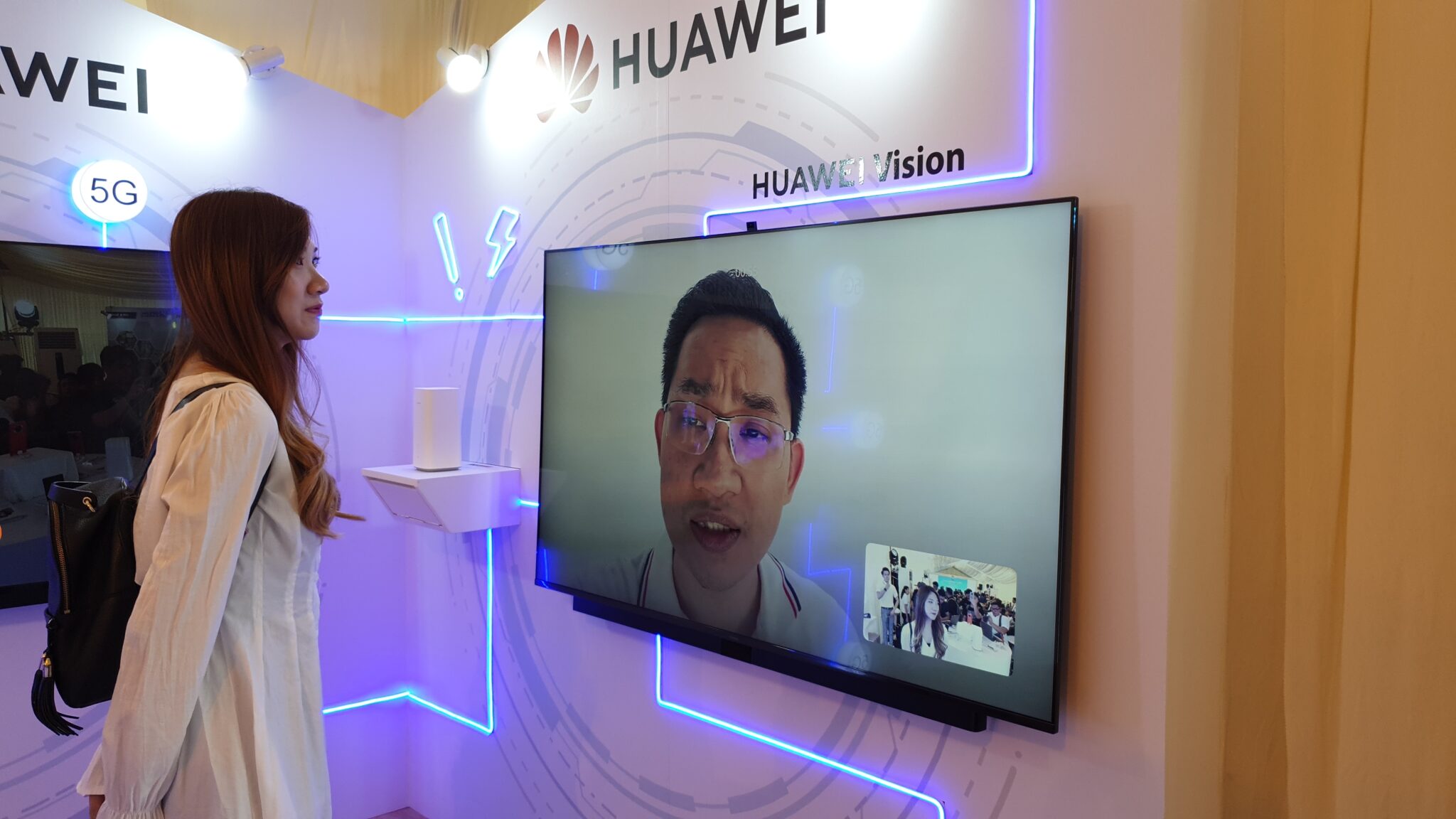 How much is the Huawei Mate30 Pro 5G?

According to Huawei, the Mate30 Pro 5G is slated for arrival sometime soon and is Malaysia’s first 5G certified smartphone with dual NSA and SA 5G network support. It will be sold alongside the current Mate30 Pro which maxes out at 4G connectivity and will, at present, only come in the shown faux orange leather backplate with a 8GB RAM/256GB storage configuration for now.

There is no exact statement on price yet from Huawei but it will likely cost more than the standard Mate30 Pro. While it sounds rather quaint to own a 5G phone seeing as there aren’t any commercial 5G networks in Malaysia as yet, you’re effectively future proofing yourself with the added bonus that the Mate30 Pro 5G has one of the best rear cameras mounted on a smartphone, as DxOMark would attest to by giving the phone one of their highest scores at 123 points. Its conventional sibling the Mate30 Pro is quite a performer as well at 121 points. Here’s a few test shots taken with the Mate 30 Pro 5G’s rear camera. You’ll notice the rendition of low light shots, especially in areas that are especially dim are excellent off the cuff with good amounts of retention of detail and great noise control. The phone’s zoom mode was excellent as well with the ability to get a steady, judder free shot at 30x digital zoom with great detail retention. 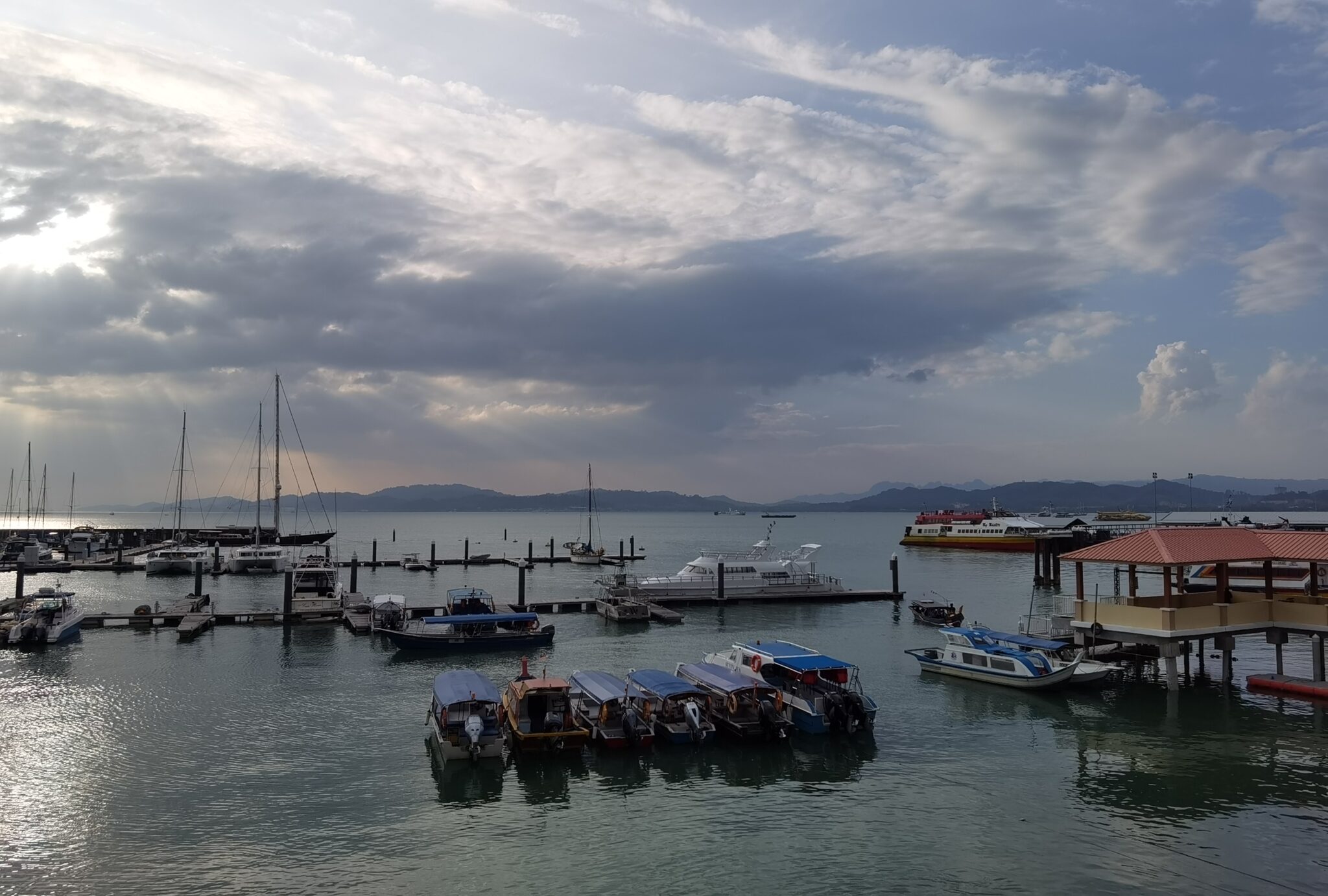 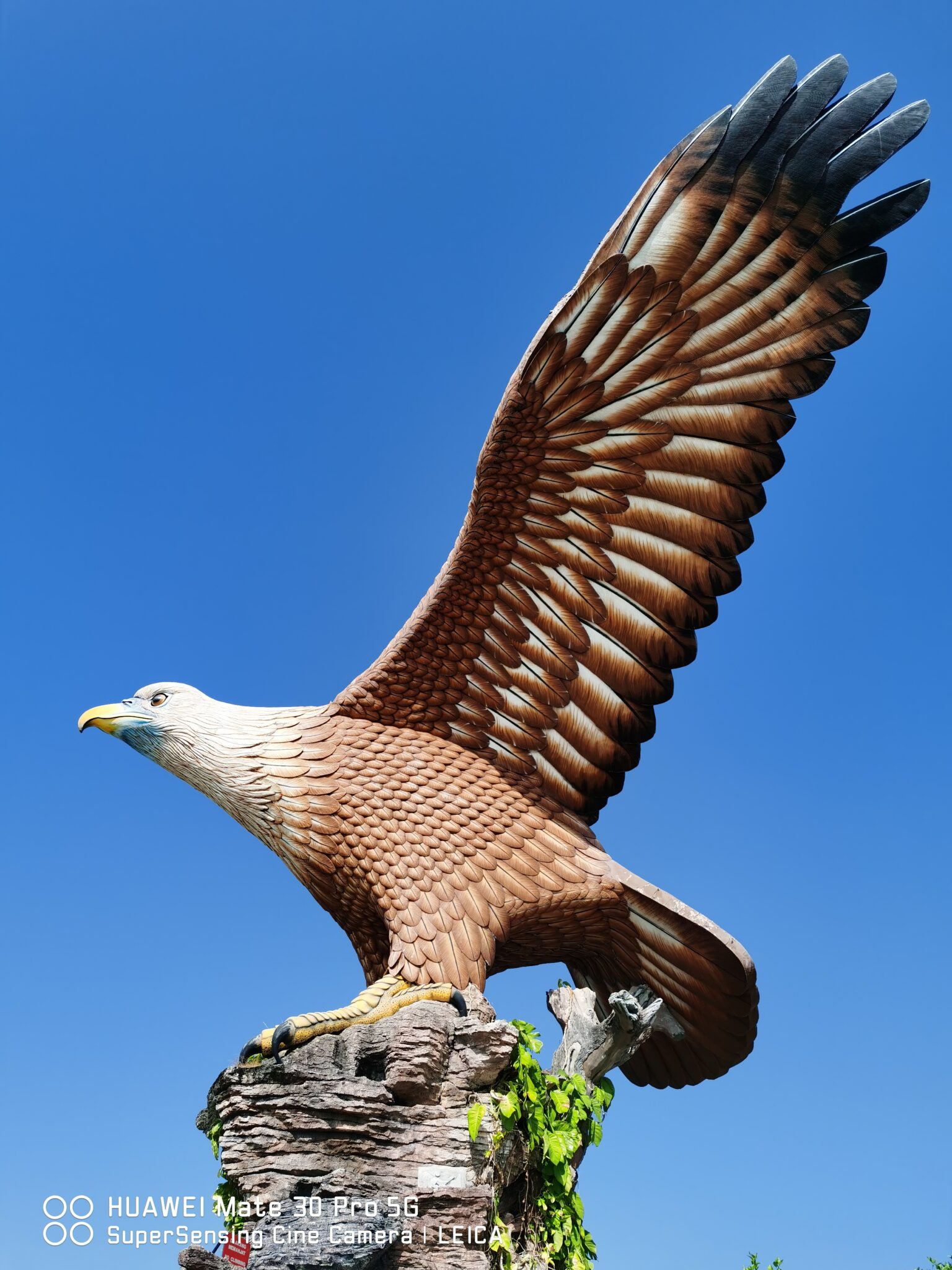 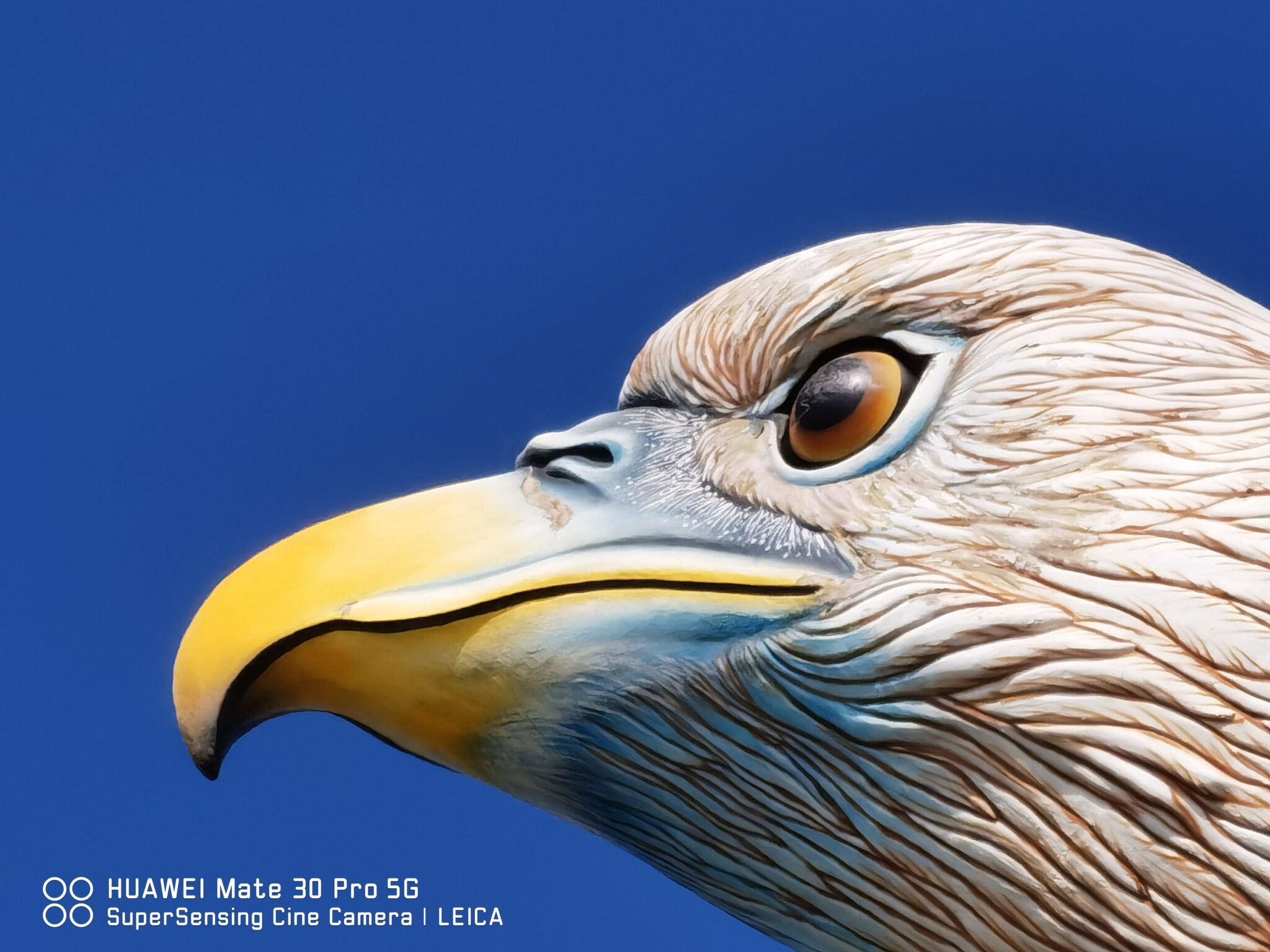 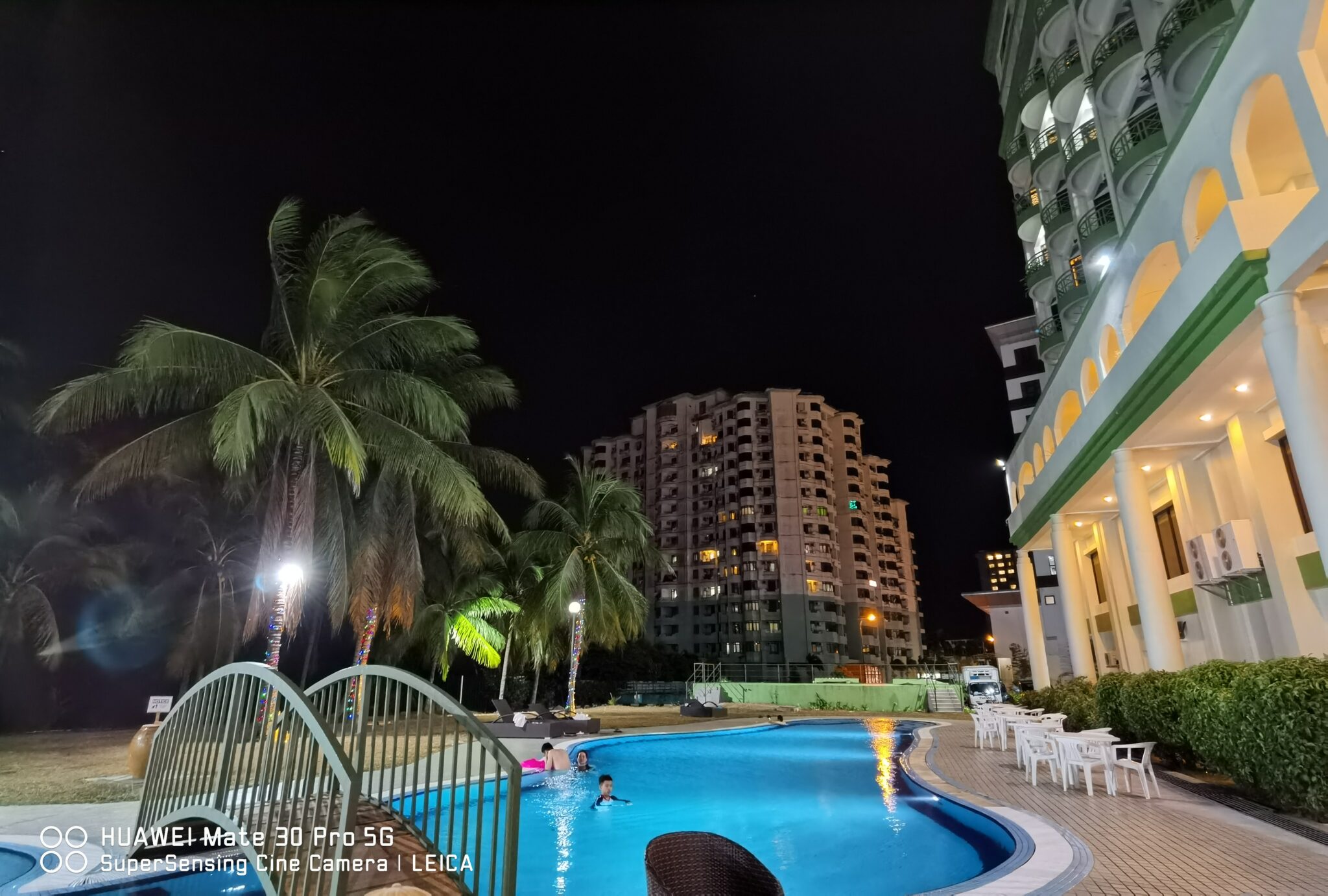 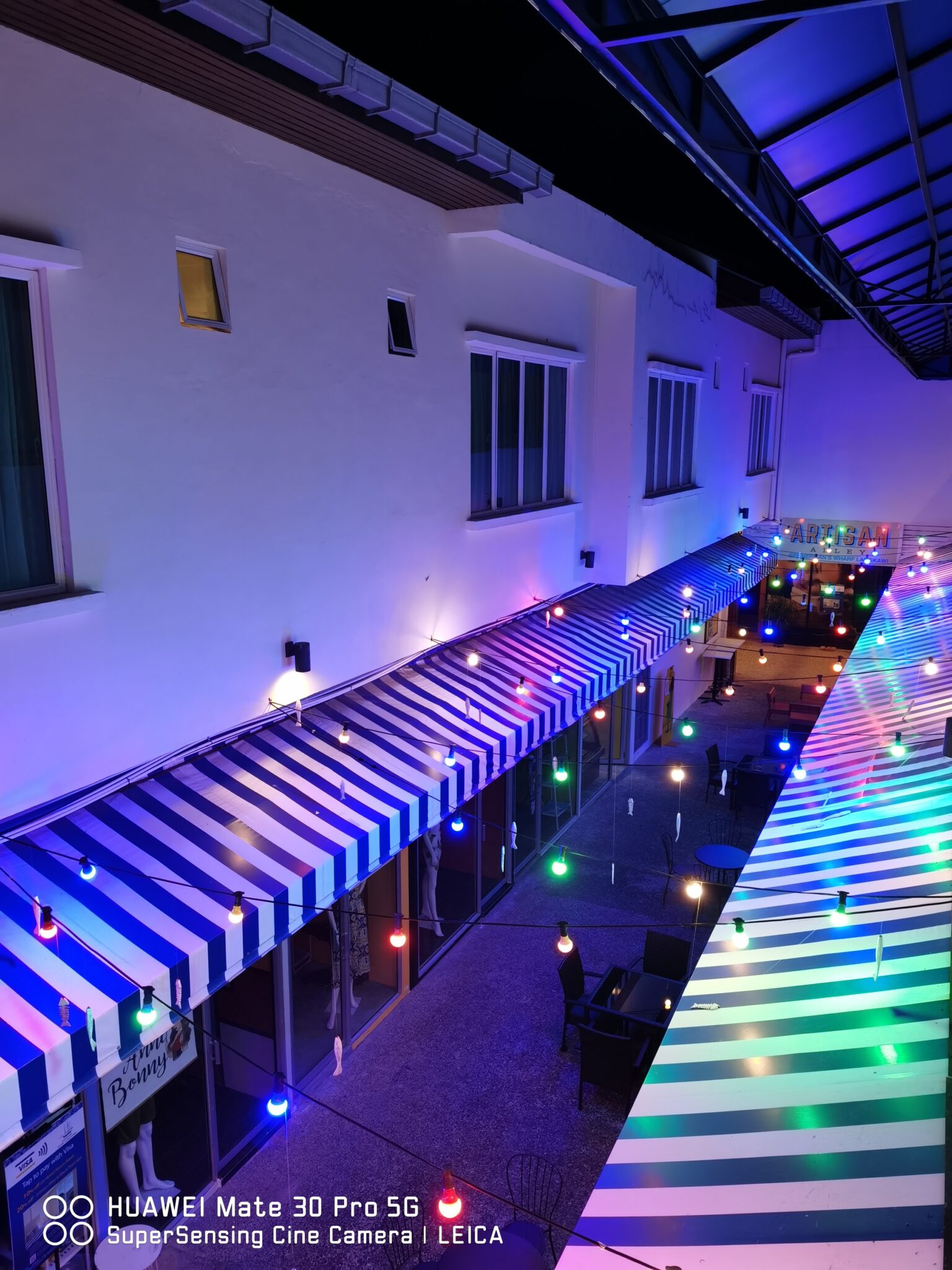