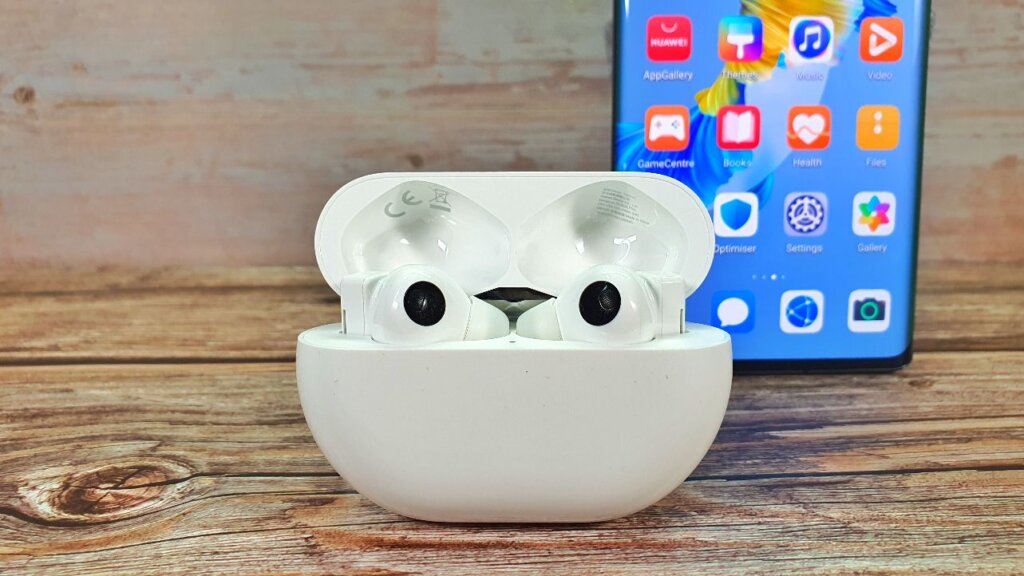 While you typically don’t associate a phone brand with making audio gear, Huawei has leaped into the audio peripherals segment with gusto and has had quite a bit of success as their gear is not only pretty darned good, it’s also relatively affordable compared to the competition. Their latest pair of wireless earbuds, the FreeBuds Pro adds in active noise cancellation at a price point below RM700. Check out our review of the Huawei FreeBuds Pro where we put it to the test. 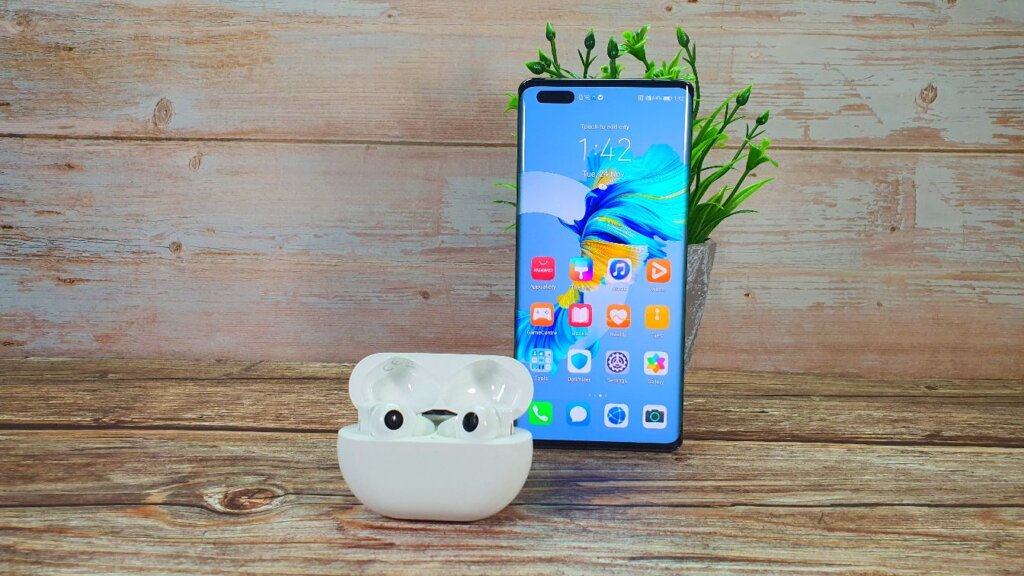 The base of the charging case features a USB-C charging port with a charging indicator on the side while the rear features a metallic looking hinge assembly. You can also charge the FreeBuds Pro wirelessly via Qi-wireless charging.

Popping the case open can be done one-handed and there’s enough of a grip on the upper and lower sections of the case that you can comfortably use your thumb as leverage and your palm as a pivot to open it. Much like other earbuds, the hinge mechanism and the earbuds themselves are magnetised to keep them from falling out. 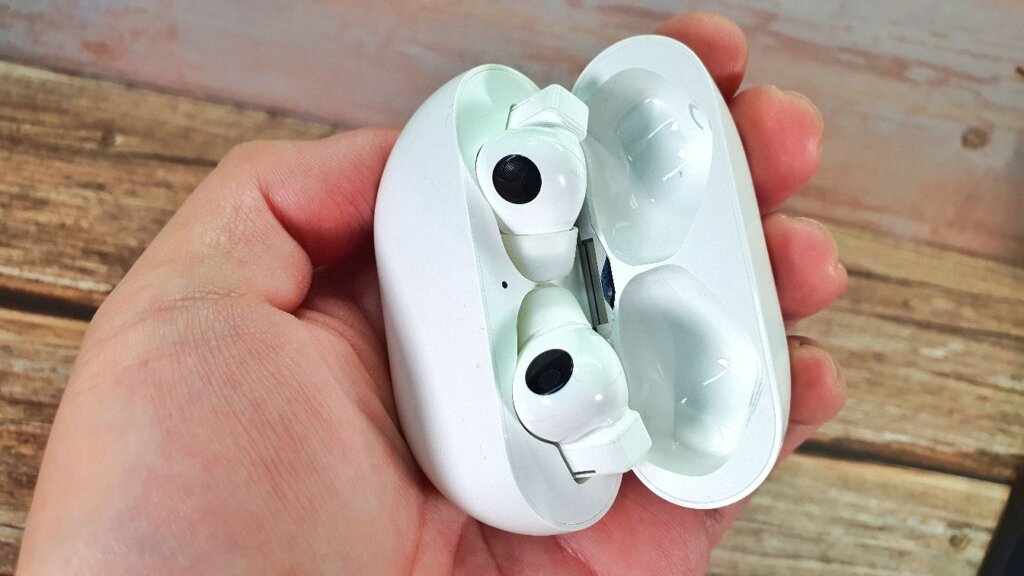 Unfortunately, the wide, low nature of the design means that the earbuds aren’t very easy to remove from the charging case. There’s not much of the ear piece to grip with your thumb and forefinger either and the fact that they’re rather slippery to boot means that this is a bit of an ergonomic mis-step in design.

That quibble aside, the FreeBuds Pro earbuds are chock full of tech. Each earbud packs 11mm dynamic drivers along with three microphones, dual Bluetooth antennas for 360-degree signal coverage as well as a Bone Voice sensor for better acoustics when making calls.

Out of the box, the FreeBuds Pro comes with the essentials including a USB-A to USB-C charging cable, the usual warranty paperwork and an additional set of small and large ear tips on top of the existing medium sized one that’s pre-installed on the earbuds that you can swap out to offer a better fit.

In Malaysia, the FreeBuds Pro comes in black, silver frost and white. Our test unit’s white finish was an added benefit as fingerprint smudges were a lot harder to see versus the other paint jobs. Overall build quality is solid and the polycarbonate casing manages to look premium without feeling plasticky.

Getting them up and running requires jumping through a few hoops. Pairing it is a relatively simple task with Huawei phones like the Mate 40 Pro recognising it almost instantly. You do however need to download Huawei’s AI Life app to access the FreeBuds Pro’s higher functions.

In terms of comfort and fit, the earbuds are on the ball though the means of controlling it take some getting used to. The angular nature of the earbuds means that you’ll need to employ a different method to control them rather than the usual combination of taps on a touch panel used in other earbud designs.

You’ll have to pinch the squarish stem portion to play and pause music or to answer calls. If you pinch twice, you can fast forward or cancel a call while pinching three times in swift succession rewinds to the previous track.

If you pinch and hold the stem portion, you get to cycle through whether Active Noise cancellation is on or off and if Awareness mode is on. Volume control is by swiping the stem up or down repeatedly with each swipe moving the volume dial in small increments.

You’re also able to further tweak the nuances of its active noise cancellation tech with the option to dial the strength level to one of four settings – Dynamic, Cozy, General and Ultra.

It’s typically set to Dynamic where the earbuds themselves automatically switch profiles depending on ambient external noise but you can manually set them to increasing levels of strength with Ultra being the most powerful setting.

The pickle here is that this feature is only available if you use Huawei’s own AI Life app that’s free available on the Google Play store and Huawei’s own App Gallery which adds another hoop to jump through but it’s not a major issue. We weren’t able to find it on the Apple app store though which means iPhone users can’t take advantage of the FreeBuds Pro’s more powerful features.

Interestingly enough, both earbuds can be used on their own which means you can just use one earbud at a time if you just need a hands free kit or you need to really stretch out battery life.

Call quality on the FreeBuds Pro was excellent with superb vocal clarity on both sides. In terms of audio quality, the FreeBuds Pro performs slightly differently depending on if you have ANC on or off. Presumably this is by design rather than a hardware quirk. In general, the Free Buds Pro  was able to deliver a relatively good bass with rather lively treble as well as a nice amount of detail but with ANC on, bass gets emphasised in tracks while you get a more balanced acoustic profile with ANC off.

The ANC in the FreeBuds Pro is rated up to 40dB and it does what it says on the tin, muting out a good deal of white noise like car engines, the murmur of traffic and most of the background noise in a coffee shop though piercing sounds like when the milk steamer or grinder in a coffee machine is working or when someone is hammering down on their horn when some prat is double parked outside are still readily apparent. 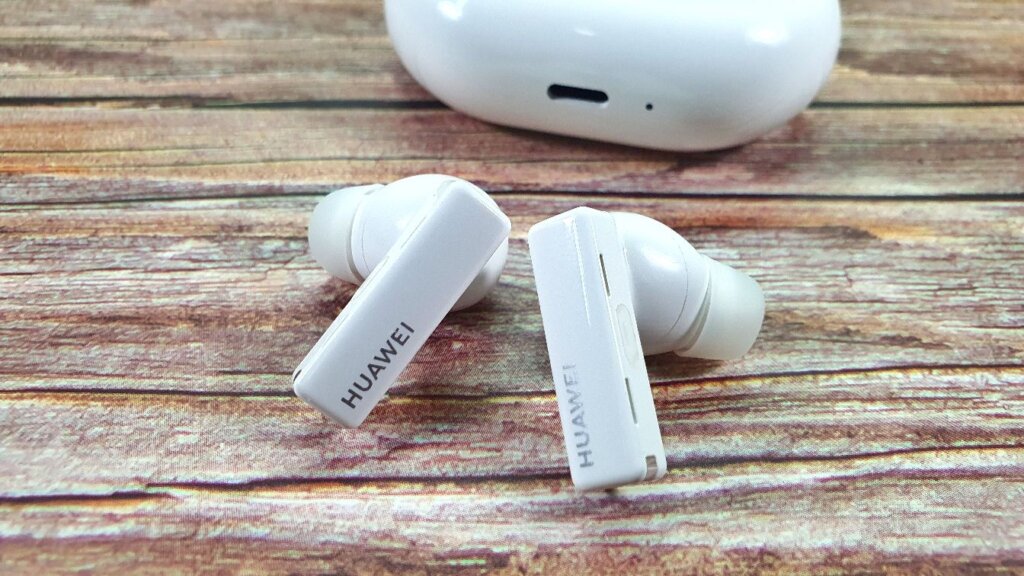 Awareness mode helps to rapidly dial down the ANC enough that you can hear a bit more ambient noise including voices which makes it handy when you want to continue wearing it and have a quick conversation . Of note is the excellent Bluetooth signal stability without any noticeable latency even several paces away from our phone or when listening to tracks.

The FreeBuds Pro is quoted to have multi point connectivity which means it is able to connect via Bluetooth to two devices simultaneously. In theory, you can pair it up with a tablet and a phone while watching movies on the former and taking incoming calls with the latter with a press of the controls but in our experience, this was a finicky experience with non-Huawei gear. It recognised and paired up with a Mate 40 Pro and a Huawei tablet instantly but needed a few tries to find a non-Huawei phone.

Even after several hours of use, the light weight of the earbuds and the cushioned ear tips ensured that it was a fatigue free experience. While it is fairly secure when worn, the lack of ear wings and nature of the design means that it isn’t the best choice for vigorous workouts which means it’s best used for general duties and as a companion on the daily commute. 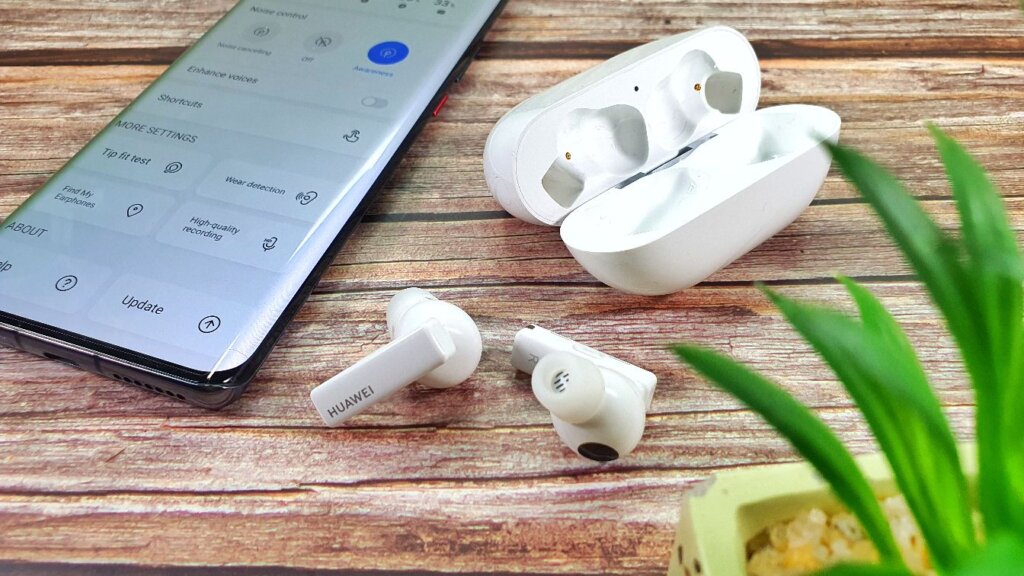 Charging it is via the USB-C port which takes about an hour and a half to get a full charge or you can opt for wireless reverse charging. This level of endurance is way above par as far as true wireless earbuds before needing a recharge.

In field tests, the FreeBuds Pro managed to achieve battery life close to its stated endurance limits with us managing to get 4 hours of music playing with ANC on and a few minutes of video calls on a single charge though we did turn on Awareness mode for a few minutes ever so often to have conversations with people around us during the test period. If you leave ANC off, you’ll achieve much better battery life.

In Malaysia, the FreeBuds Pro retails for RM699 which is RM20 more than what its predecessor the FreeBuds 3 retailed for when it debuted last year. This is still pretty good value for what you pay for as you’re effectively getting a pair of wireless earbuds with good voice and sound quality combined with excellent ANC capabilities.

If you own an Android phone, this is well worth a look for its feature set as general purpose earbuds but owners of Huawei phones should consider this a highly recommended purchase for its seamless compatibility with other Huawei kit.

One of Huawei’s best active noise cancellation earbuds with good sound quality and excellent noise cancellation performance. It works best with other Huawei kit but is well worth a look for Android phone owners from other brands.

Earbuds are slippery and hard to remove from case