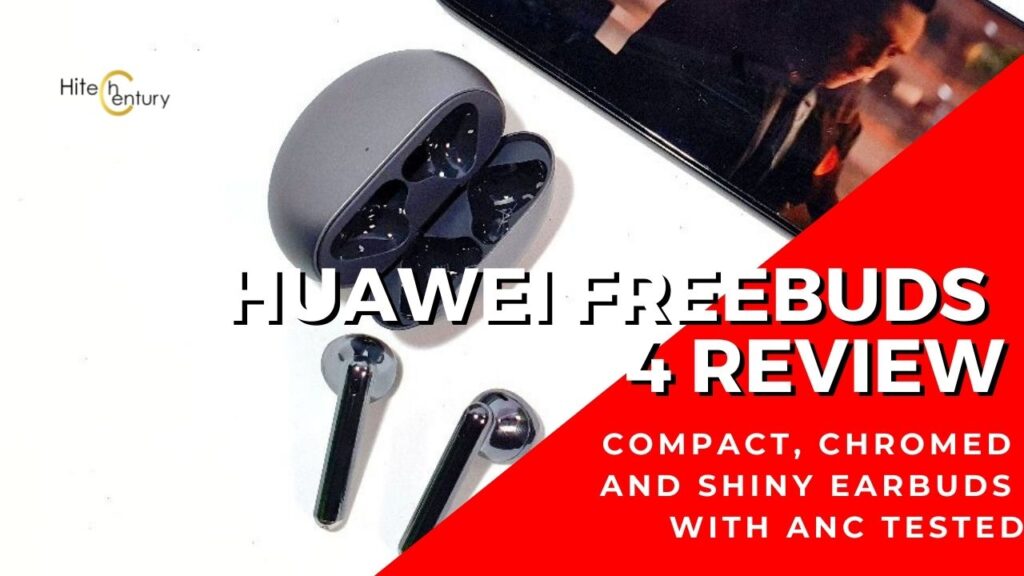 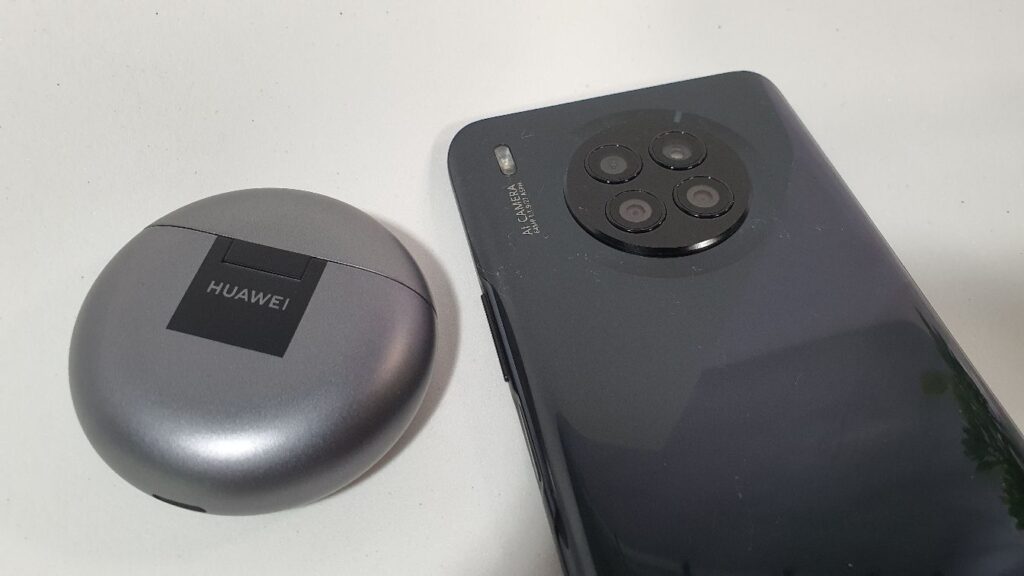 Huawei FreeBuds 4 – What’s in the Box and Design

The successor to last year’s FreeBuds 3, the Freebuds 4 comes with enhanced performance across the board and is the more powerful version sibling of the FreeBuds 4i released earlier this year.

Out of the box, our FreeBuds 4 review unit comes with the absolute minimum of kit that includes a USB-C charging cable, the charging case itself and the earbuds as well as the obligatory warranty and quick start manual.

In the case of our review unit, it came in a shade of Silver Frost that is in essence a sort of matte grey paint job all across broken up by a small smidgen of black on the rear hinge with the Huawei logo emblazoned on it. Alternatively, the FreeBuds 4 can also be had in a pure white shade of Ceramic White.

Oddly enough, the earbuds themselves come in a gaudy shade of metallic silver that are a good deal shinier than the external chassis. This unorthodox choice of colours repels fingerprints nicely to a better degree than the earlier FreeBuds 3 which came in a shiny shade of black. Unfortunately, it’s not the classiest choice of colours as the matte gray and ultra shiny silver cheapen its overall appearance. 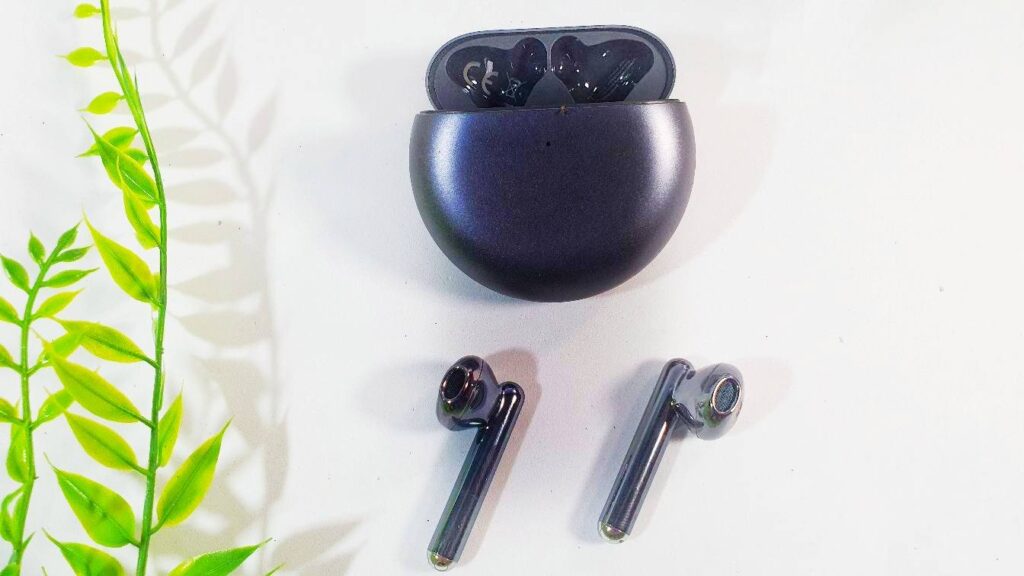 The charging case of the FreeBuds 4 is nigh identical to its predecessor with an appearance resembling a silver hockey puck or a tiny silver wheel of Babybel cheese with a top opening hinge to store the earbuds for charging. The base of the case has a USB-C port for charging and the side has an almost imperceptible button for pairing duties.

In terms of ergonomics, the case ticks all the important check marks as it’s wonderfully light and the case itself can easily be opened one-handed without undue effort.

Perhaps the only gripe here is that it feels somewhat plasticky though there’s no creaking at all and it’s fairly solidly built. Fortunately, there’s a silver lining to this, pun aside, as it’s wonderfully light at just 46.2g inclusive of the earbuds which makes it great to pocket for all-day carry.

The earbuds in the FreeBuds 4 are of a similar open fit form factor as their predecessor in the FreeBuds 3 with a long stem and a sculpted earbud that houses the 14.3mm drivers and 30mAh battery but have a number of subtle improvements that make it more comfortable and lighter by 0.4g while offering better noise cancellation and enhanced audio performance.

According to Huawei, they’ve sculpted the earbuds after assessing the shape of thousands of ears to offer the best possible fit while retaining featuring larger 14.3mm dynamic drivers paired with Liquid Crystal Polymer (LCP) composite diaphragms and a 15% larger bass tube for beefier bass.

Huawei’s biggest feat of design though is that the FreeBuds 4 feature what they call as Adaptive Ear Matching (AEM) tech for their noise cancellation. Seeing as everyone’s ear canals are shaped differently, the FreeBuds 4’s AEM feature automatically detects the shape of the earbuds and then picks the best noise cancellation waveform out of a set of stored samples for best effect.

The FreeBuds 4 also features fast pairing and simply flipping the case open saw our Windows 10 laptop recognising it in seconds.

The earbuds work as is straight out of the box with hardwired controls with a sliding up and down the stems gesture for volume control, a press and hold motion to turn ANC on or off and a double tap to control content playback.

For a modicum of customisability, you’ll need to download Huawei’s own AI Life app. While a version does exist on the Google Play store and the Apple app store, the latest version is available as a downloadable APK via a QR code link on the back of the packaging which recognises the FreeBuds 4.

Once installed, you can tweak what double tapping does from a limited set of menus so you can swap what the left and right earbuds do independently from each other. Potential commands include from moving or going back one track and firing up the voice assistant; the press and hold and swipe commands are unfortunately hardwired into the FreeBuds 4.

The AI Life app also allows you to manually turn ANC on or off , tweak sound quality by prioritising bass or treble and to get the earbuds to emit a shrill shriek so that you can find them if you lose them. There’s no equaliser settings so you can’t fine tune your sound on a granular level to taste but it’s typically unused save by ardent audiophiles.

Getting a good fit with the Huawei FreeBuds 4 is a bit of a hit or miss as the open fit nature of the design means that it lacks any silicone earbuds to adjust the fit. Fortunately, the earbuds do indeed fit securely and managed to stay in even with an enthusiastic round of jumping jacks. The lightness of the earbuds ensured they remained comfortable even after several hours of usage.

We put our FreeBuds 4 review unit through the usual round of contemporary, classical and pop music along with a healthy slice of gaming and movies to see how it handled most tasks.

On the stock settings, the FreeBuds 4 managed Pink Floyd’s ‘Time’ in an excellent fashion with superb sound staging in the opening portion of the track. The good sound staging was also demonstrated in several action movies on Netflix which had beefy explosions going off with distinct left and right sound separation. 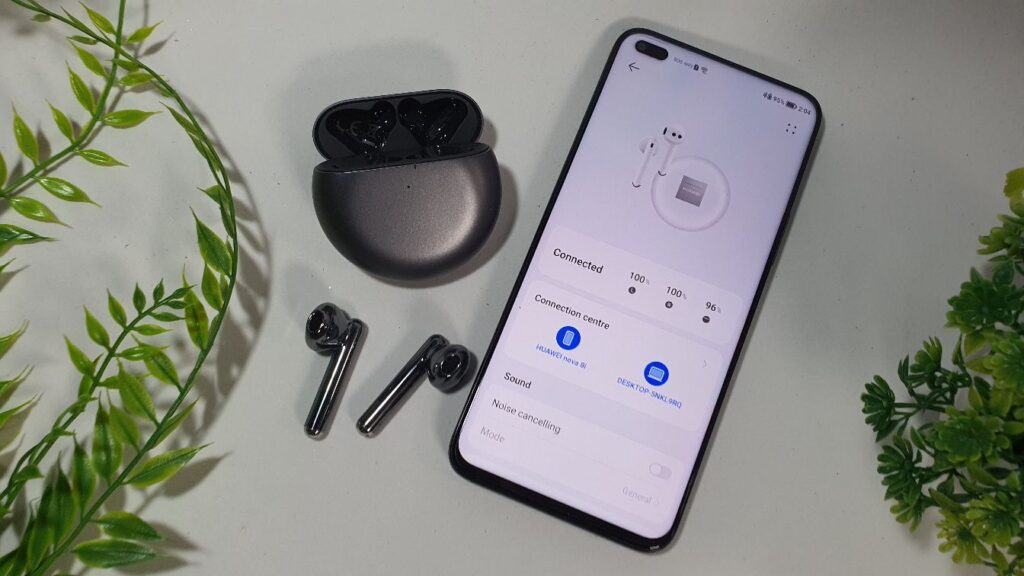 It exceeds its predecessor in sound quality by a slight margin on account of the slightly larger drivers, enhanced firmware and improved AEM tech with good detail and a decent amount of bass in most tracks though it isn’t very loud even when dialled to maximum volume.

In gaming, it managed to handle the usual like Call of Duty Mobile without noticeable lag though I wasn’t able to notice any significant latency differences when using the nova 8i or a differently branded phone in either case.

There’s no way to dial the strength of the provided noise cancellation barring simply turning it on or off and it lacks an Ambient mode when you’re using it outdoors but seeing conditions of late that require most of us to work from home, the latter requirement is likely isn’t going to be a major factory anyway. 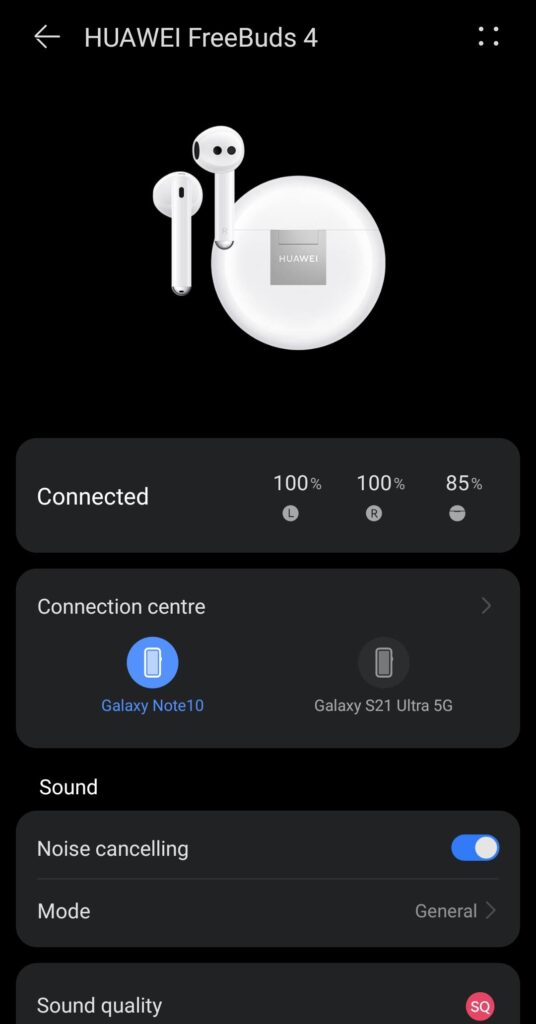 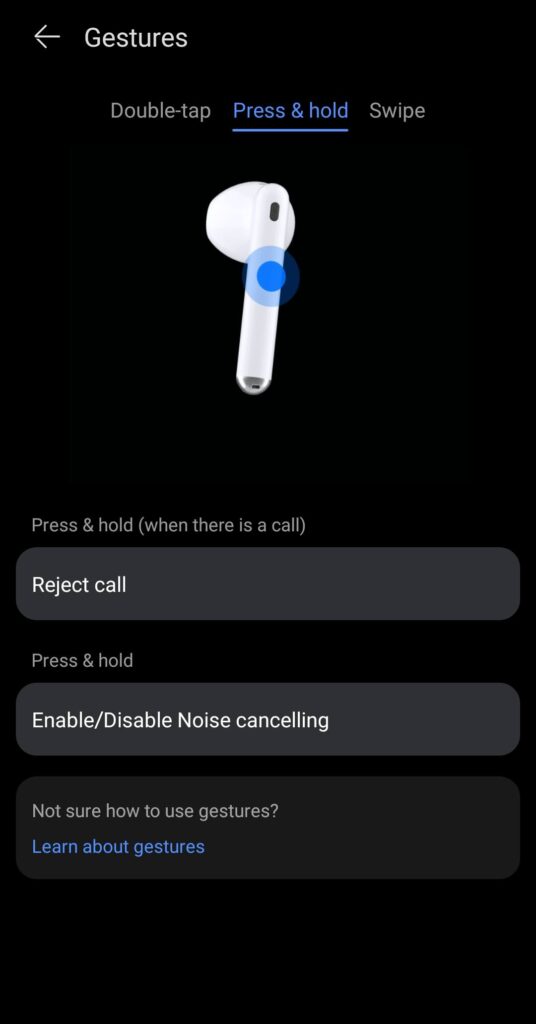 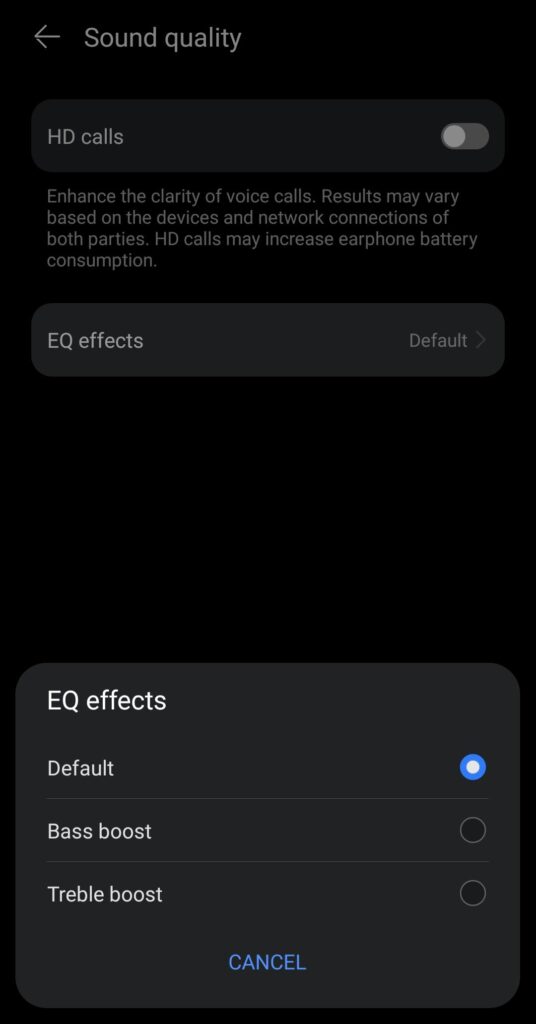 Battery life on paper is quoted to be 2.5 hours with ANC activated and 4 hours with ANC off with a grand total of 14 hours inclusive of the charging case for the former and 22 hours for the latter. In practice, this is an accurate assessment and a full charge and with ANC on, the earbuds lasted the quoted amount which is equivalent to about a day and a half of heavy usage before needing a recharge.

Are the Huawei FreeBuds 4 worth it? 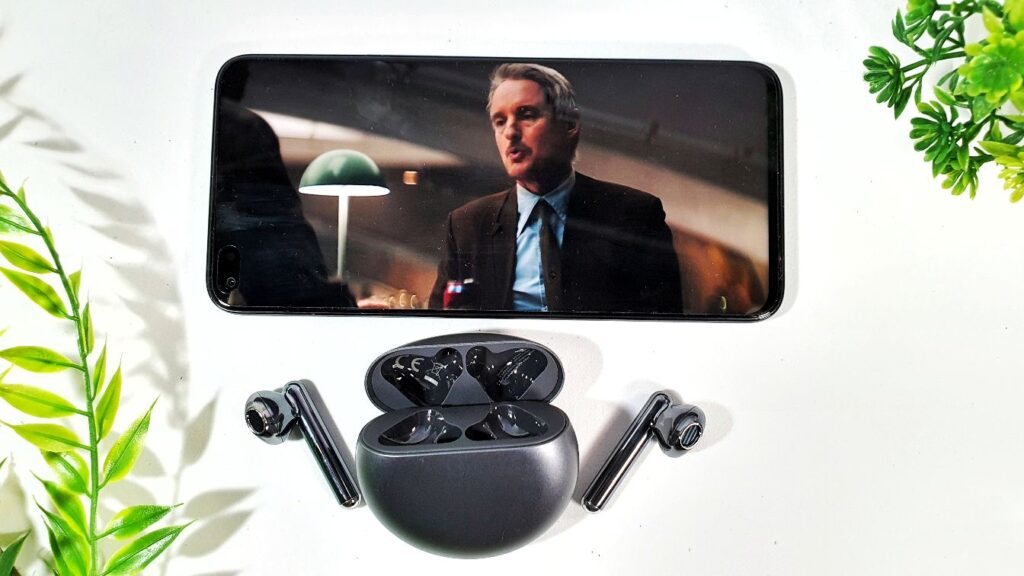 This is tempered though by its unremarkable battery life and, in the case of the Frost Silver finish, a somewhat plasticky look. Still, these are minor quibbles to what is otherwise a solid pair of open fit wireless earbuds at at a relatively fair price point. 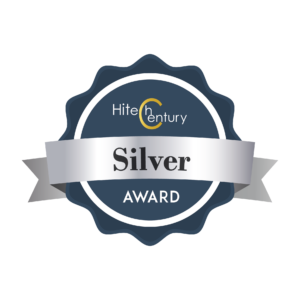 The Huawei FreeBuds 4 is a modest update from its predecessor the FreeBuds 3 with a similar form factor and enhanced features including improved active noise cancellation and audio performance. Even with the open fit design, the FreeBuds 4 features good noise cancellation, bass and detail, making it an excellent pair of general purpose wireless earbuds even for those who aren’t fully invested in Huawei’s ecosystem.