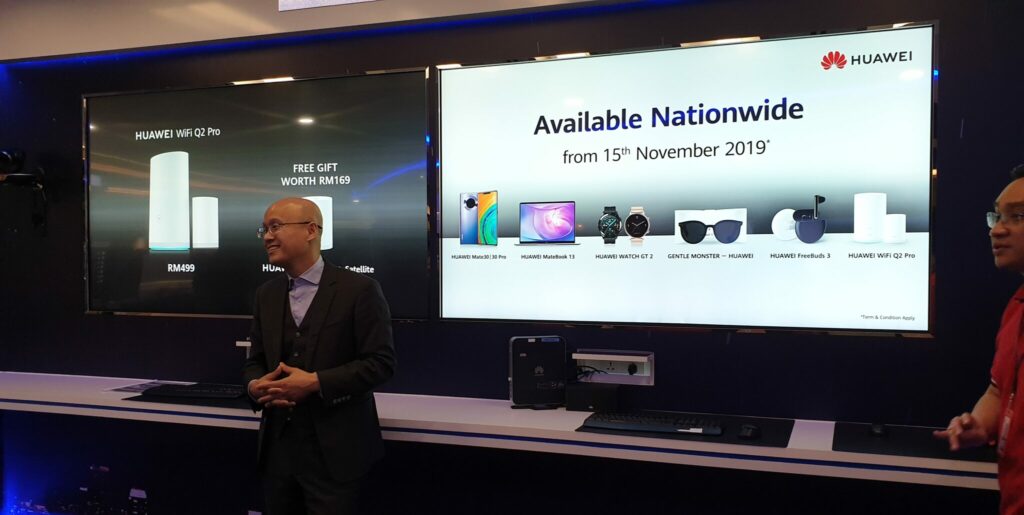 Huawei Malaysia has showcased several additional bits of kit to complement their ecosystem of products in Malaysia ranging from their Huawei Wifi Q2 Pro modem all the way to their FreeBuds 3 wireless earbuds. They’re even issuing smart eyewear too in the form of their Huawei x Gentle Monster smart sunglasses that are slated for arrival in-country along with a refreshed MateBook 13 notebook. Huawei also announced the general availability of their Mate 30 and Mate30 Pro smartphones.

In an experiential event held at their Malaysia headquarters, Huawei showcased an eclectic array of kit that interacts seamlessly with their growing ecosystem of products exemplified by their motto of Huawei ‘One Tap Share’ for seamless pairing and connectivity. 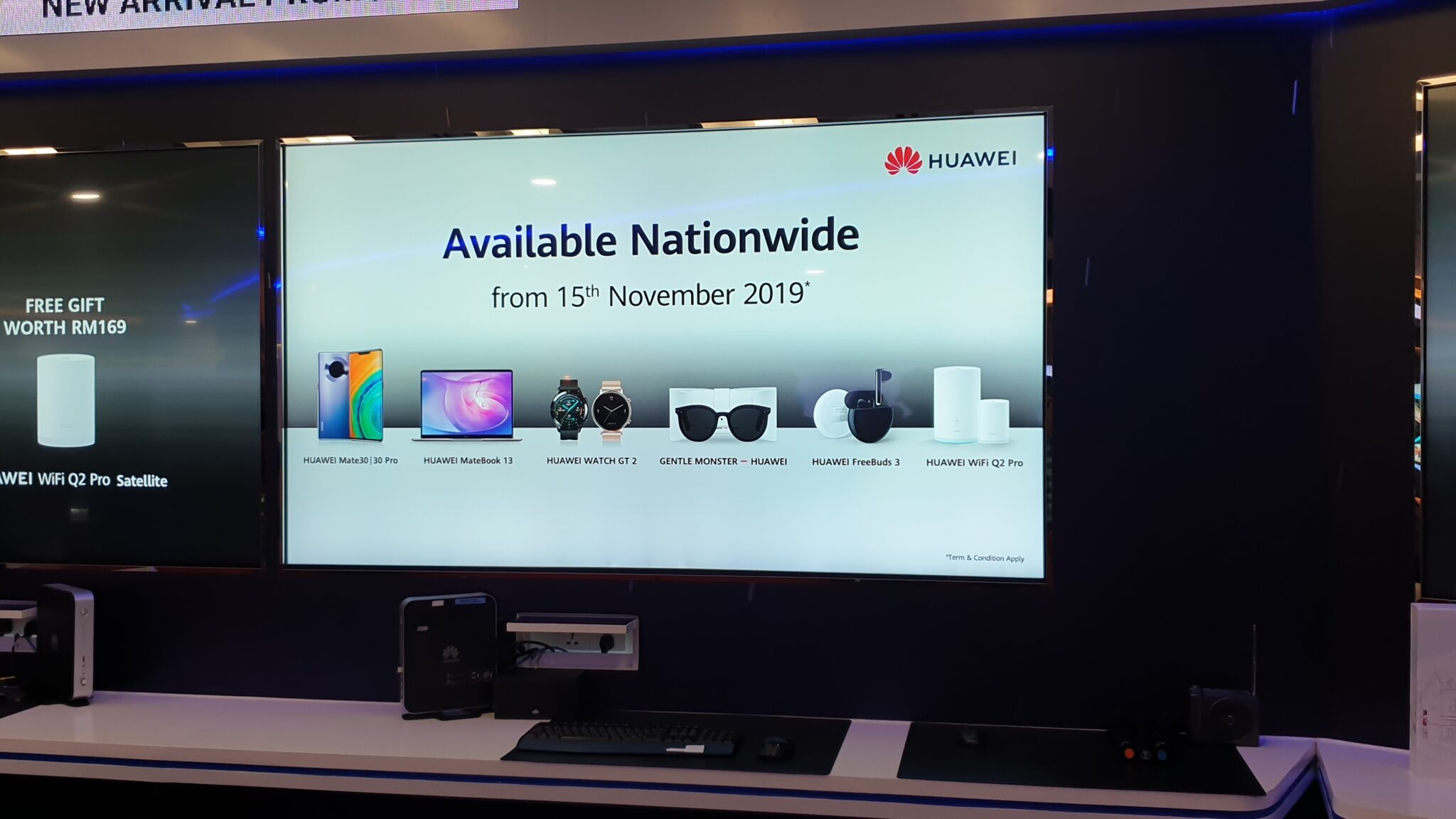 The Huawei Wifi Q2 Pro modem helps to ensure solid connectivity in every part of your home. Pairing up with it is via scanning a QR code emblazoned on the side of the chassis or by tapping your phone onto the modem itself via NFC. 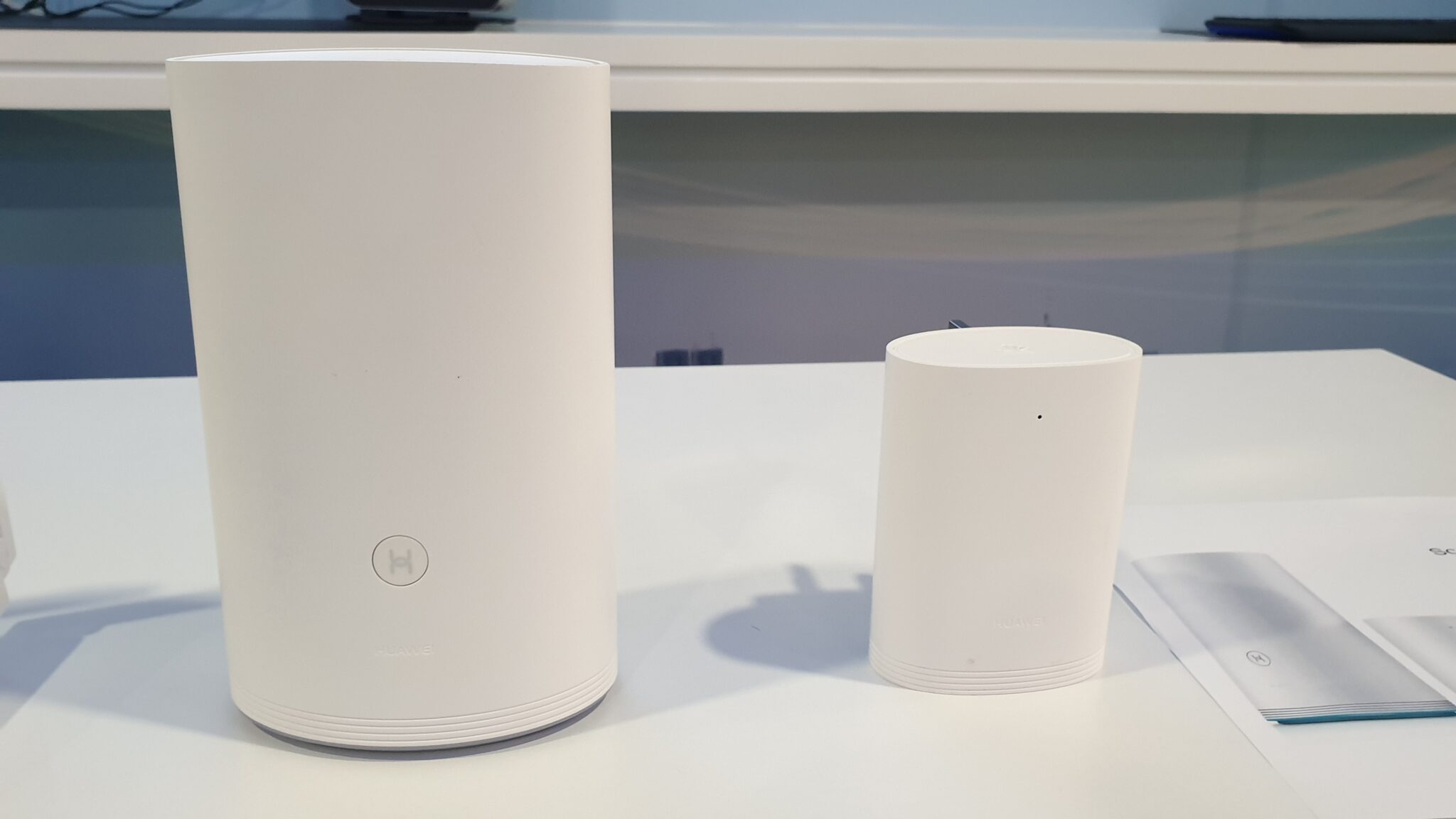 The FreeBuds 3 noise cancelling earphones come in a circular casing with earbuds akin in design somewhat to Apple’s buds while offering seamless pairing via Bluetooth and wireless charging via a paired Huawei smartphone like the Mate 30. 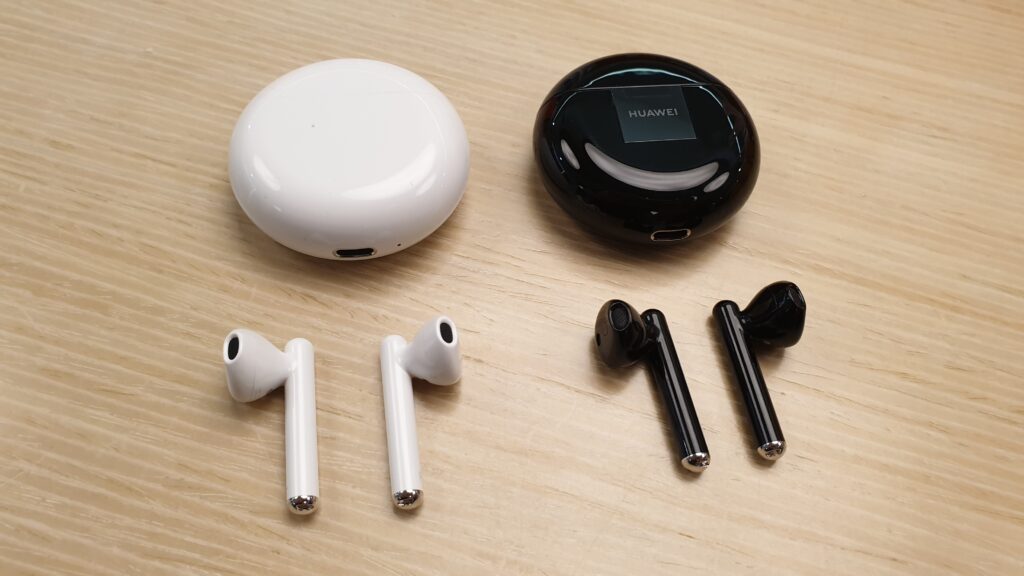 The refreshed Matebook 13 is functionally similar in design and hardware as its predecessor with a 14.9mm thin chassis and your choice of a variant with an Intel Core i5 or i7 processor but this time around it upgrades the existing NVIDIA MX150 graphics to an MX250 GPU for beefed up capabilities in terms of work and play. The interesting feature here is seamless pairing with a P-series or Mate series phone like the P30 or Mate30 via a simple tap that allows for users to share images back and forth as well as throwing up an instance of the phone display onscreen for easier viewing. 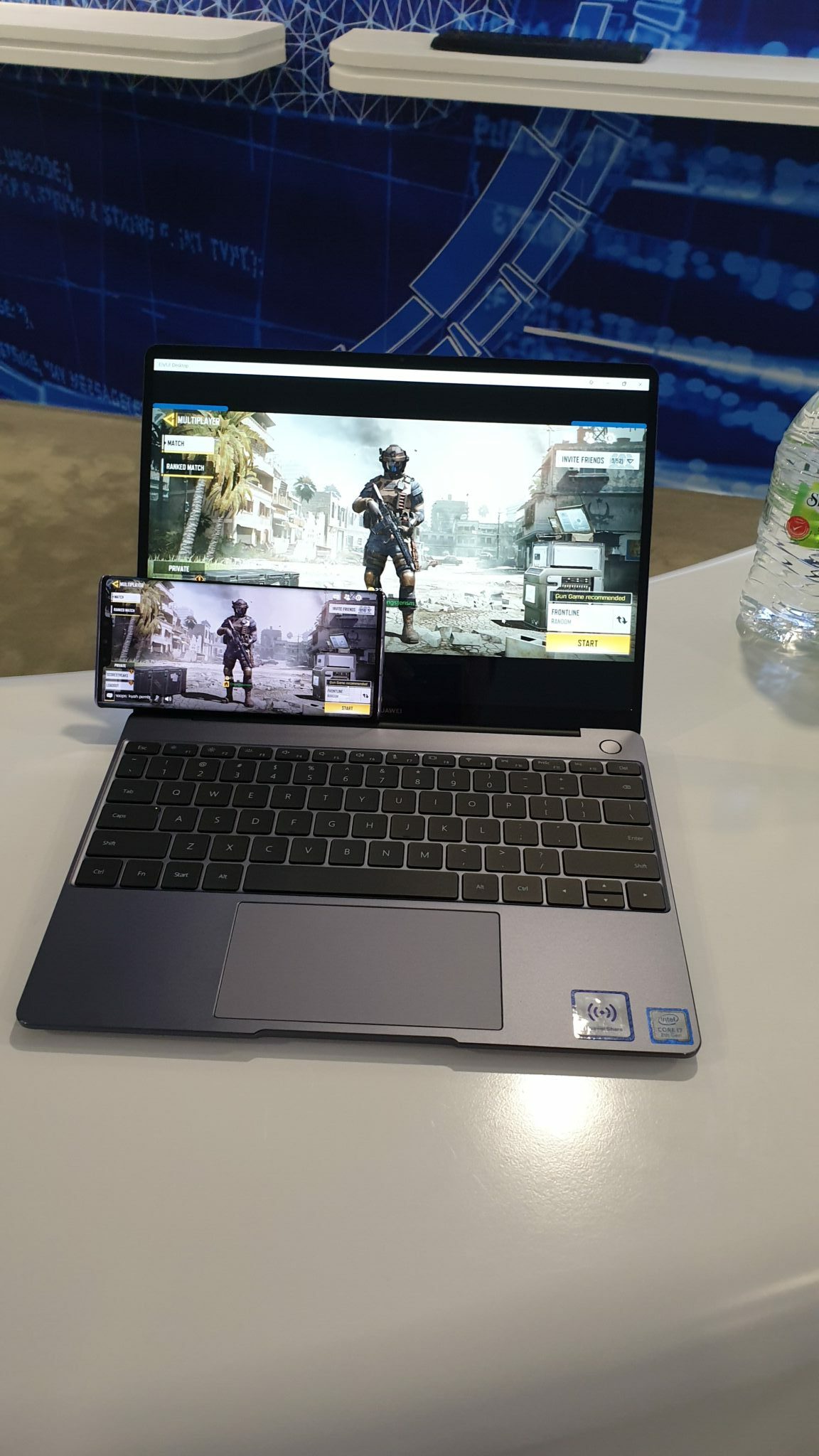 The Huawei X Gentle Monster smart eyewear is what you get if you mix a pair of sunglasses and a pair of wireless headphones as you can listen to your tracklist, make and take calls as well as protect your peepers in style. In Malaysia, it comes in two variants dubbed Jackbye and Eastmoon with the former sporting larger lenses than the latter but both are otherwise functionally similar. 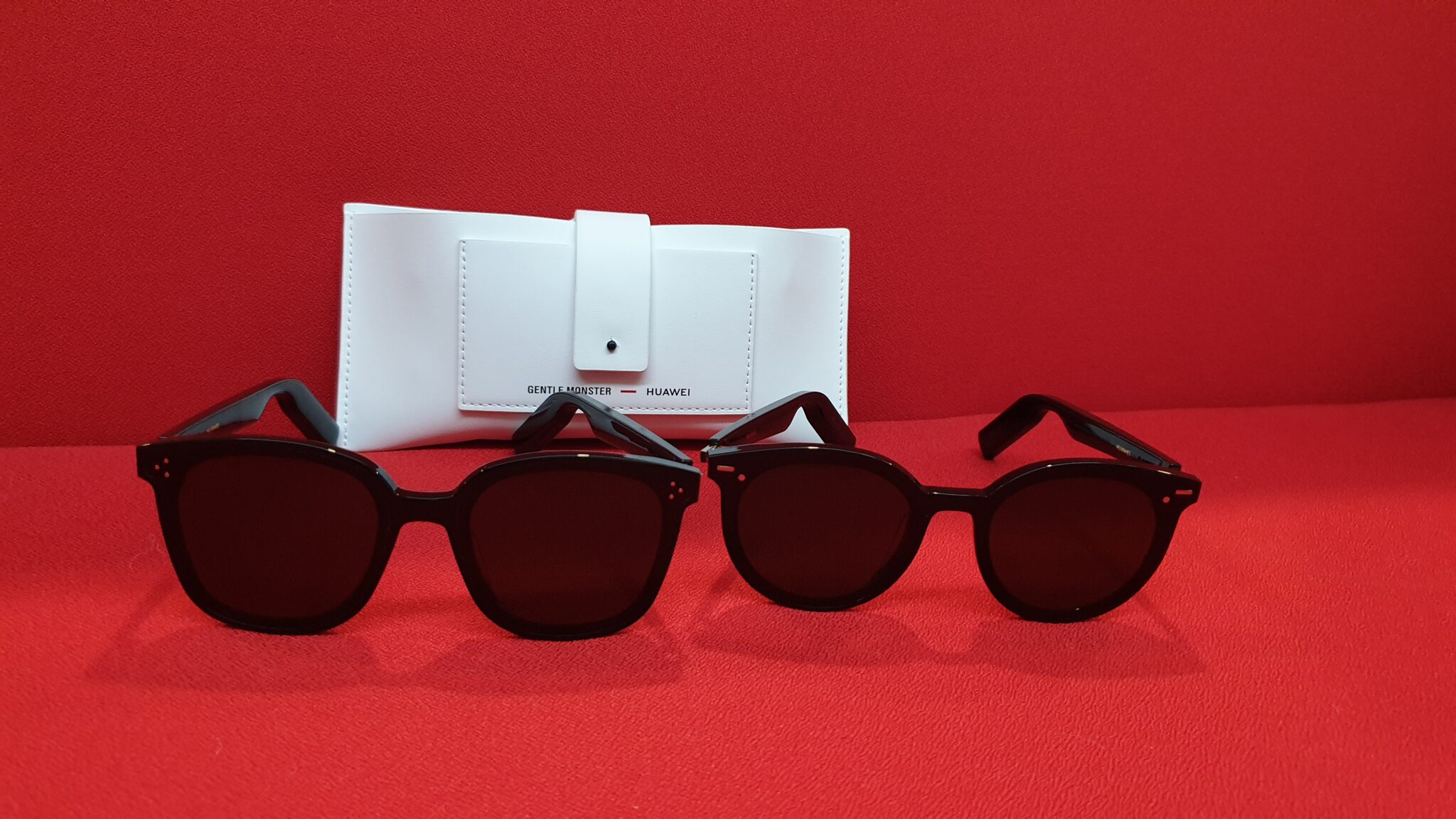 Huawei also announced the availability in general retail for the Huawei Mate30 and Mate30 Pro in stores nationwide with the former retailing for RM2,799 and the latter at RM3,899.  What this means is that you needn’t have to sign up for their referral programme to get the phone – you can just walk into a store and purchase it outright. They’re also throwing in a host of free gifts to sweeten the pot when you buy either phone.

Also available from 15 November onwards is the refreshed Huawei Matebook 13 with an Intel Core i5 for RM3,599 while the i7 variant retails for RM4,399. The Huawei Wifi Q2 Pro modem retails for RM499 and comes with a paired Q2 Pro Satellite repeater though if you purchase it fast, they’ll throw in an additional Q2 Pro Satellite repeater worth RM169for a total of 2 on the house. 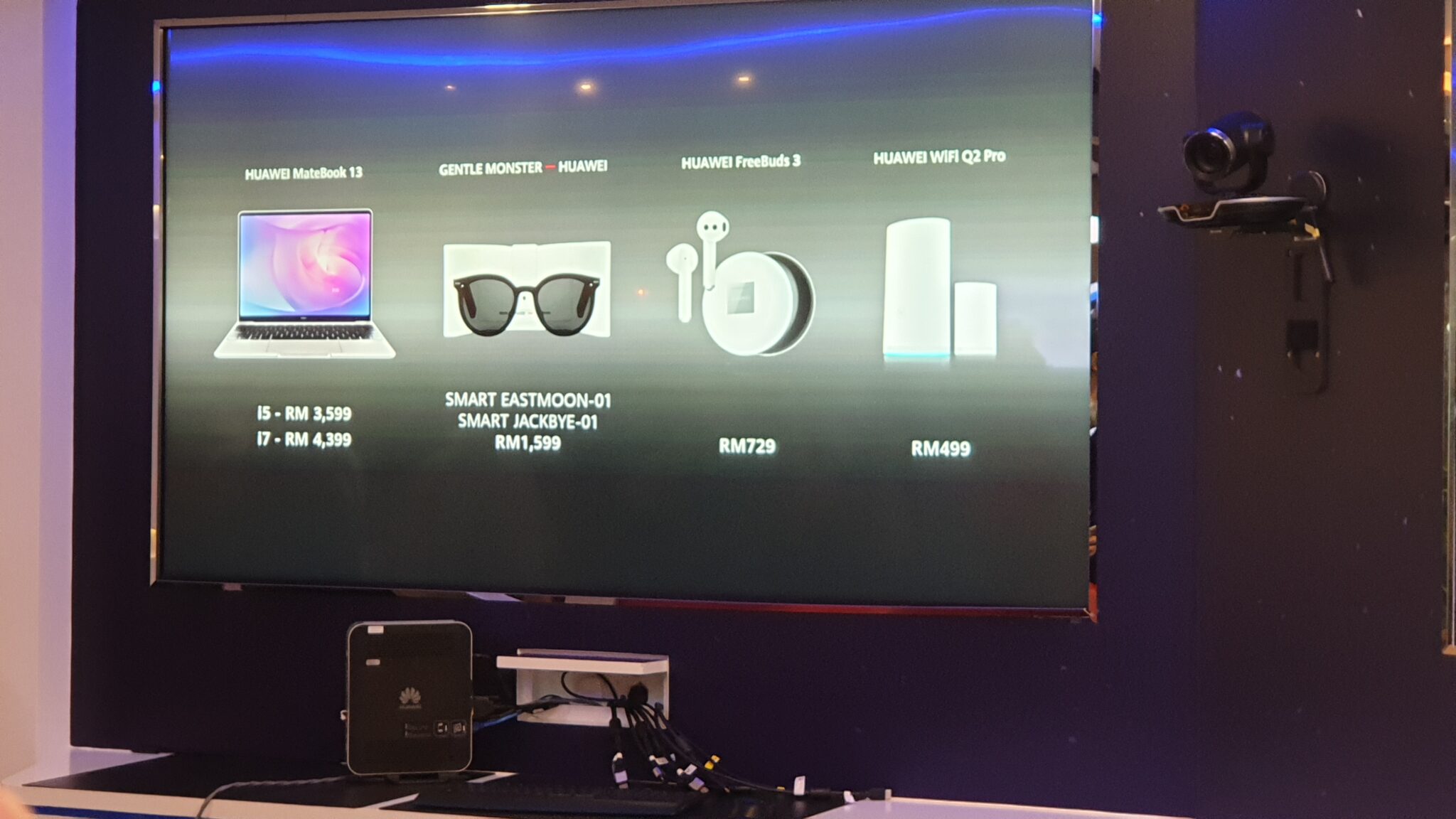 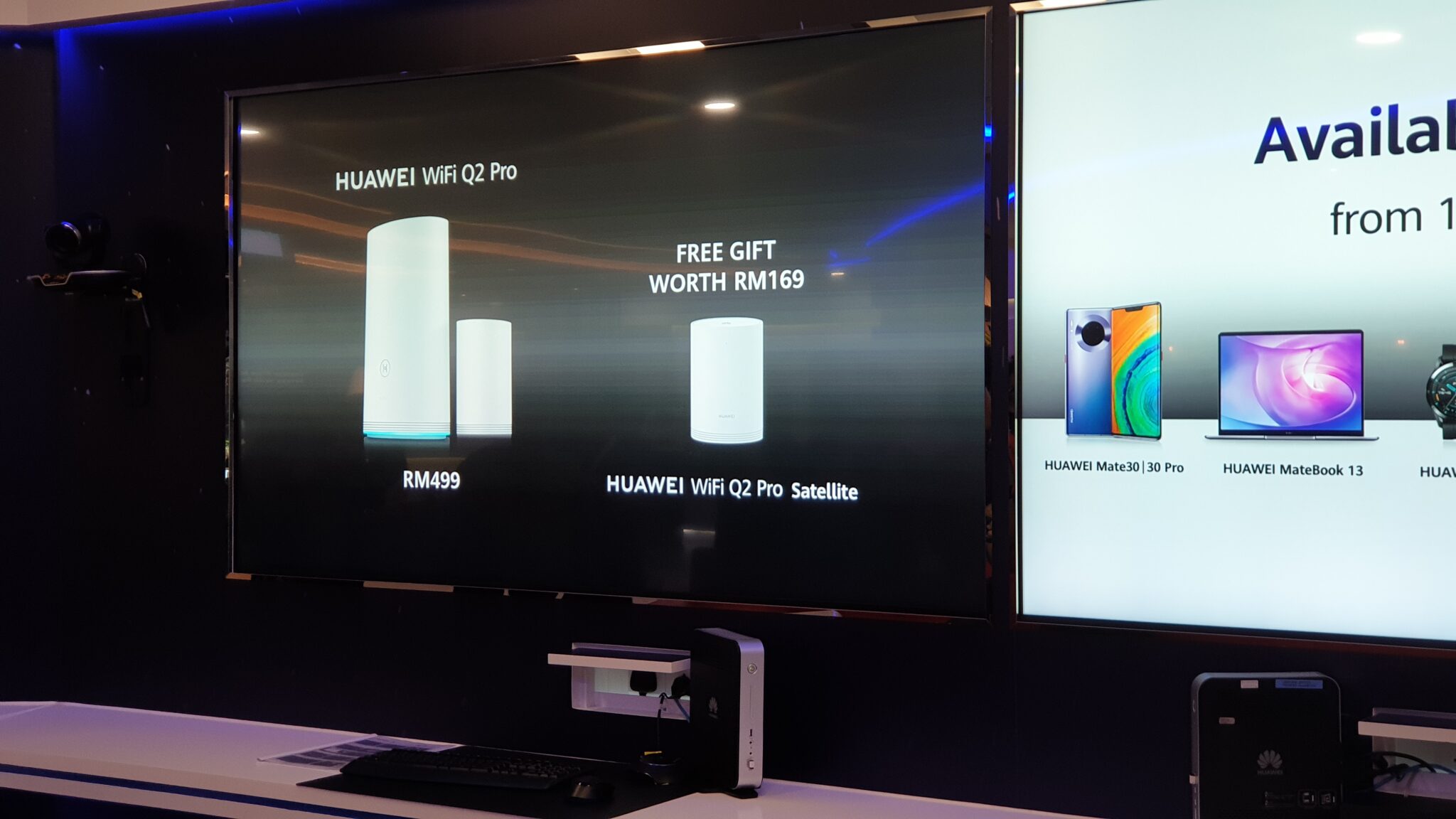 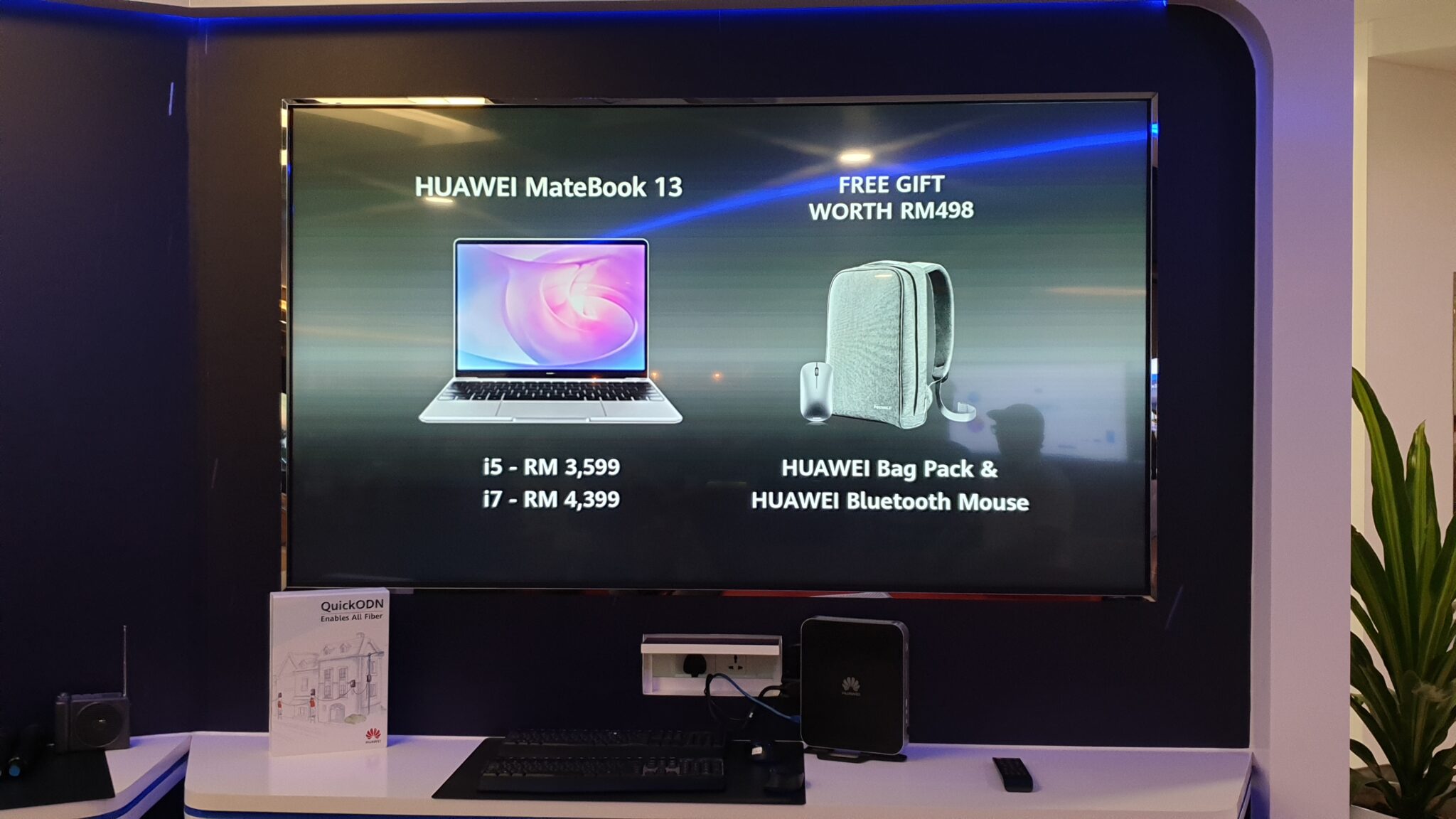 The Huawei FreeBuds 3 earphones will retail for RM729 a pop while both variants of the Huawei x Gentle Monster eyewear (Jackbye and Eastmoon) retail for RM1,599 per pair. To recap, all these products will be available nationwide from 15 November onwards which is next Friday. For more details swing by Huawei’s official Facebook page at www.facebook.com/HuaweiMobileMY