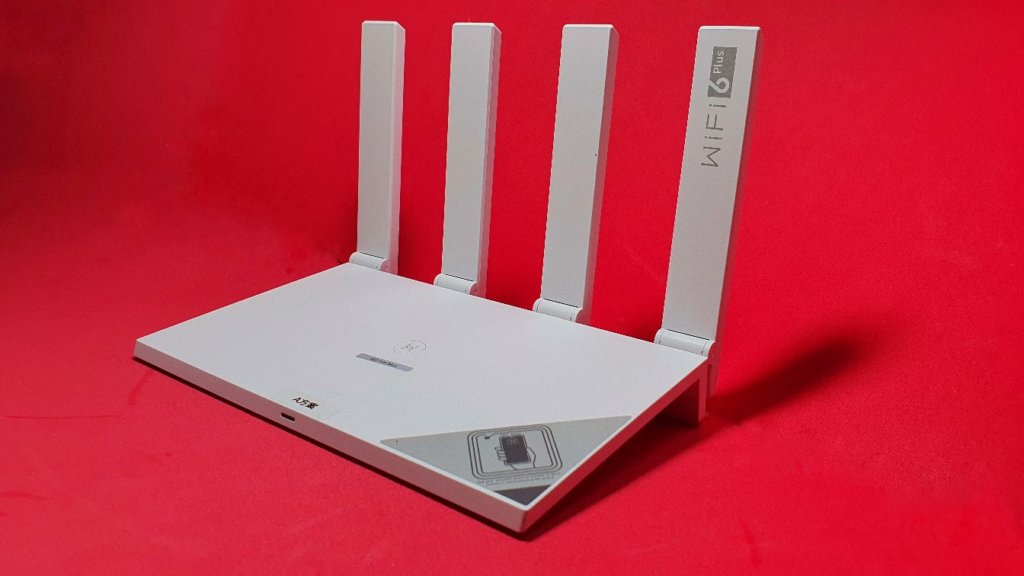 Routers aren’t exactly the sexiest item of tech but Huawei’s new WiFi AX3 Router aims to take things up a notch as it comes with a slick-looking design that screams more modernesque chic and less Brutalist art sculpture and the addition of the latest WiFi 6  Plus connectivity.

The Huawei WiFi AX3 router comes in a surprisingly large box that holds the router itself, a length of ethernet cable, a power cable to keep it juiced along with a quick start manual and the obligatory warranty card. 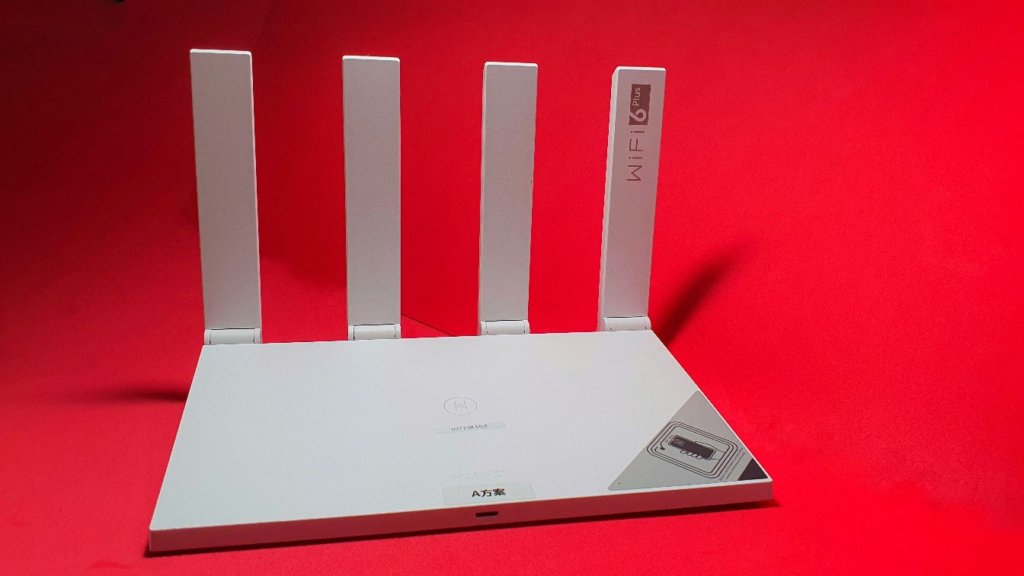 In terms of design, the WiFi AX3 router strikes a clean, chic design done up in white that belies the usual designs seen in other routers that often resemble a mummified spider or an octopus with rigor mortis.

Slick angular lines lead up to a quartet of antennas that flip up like the tines of a pitchfork. They are not removable nor do they rotate but they’re exceptionally sturdy so they’ll stay in whatever position you put them in. 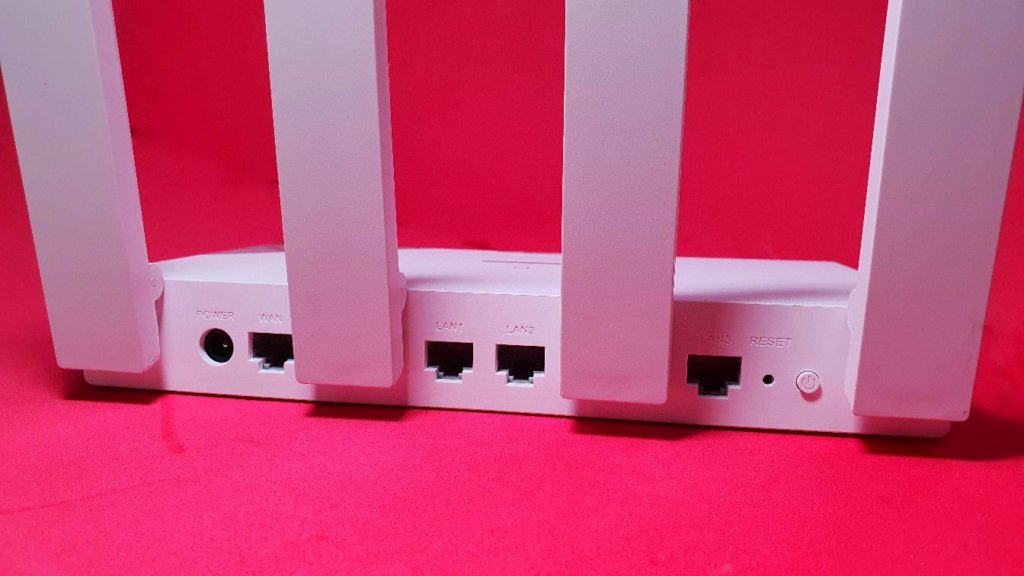 The corner has an NFC chip that allows for the Huawei Share function that enables Huawei and Honor phones of recent vintage to easily connect to the router with a single tap.

There is also a rounded key with a stylised H in the middle that allows you to easily connect to other Huawei devices within range and to act as a WPS key.

The sole LED light on the router is plonked up front; the only indicator that it’s working is a steady glowing green light, and red if it’s not. Unfortunately, the WiFi AX3 router lacks other LED indicators so you can’t exactly see if the rest of it is working at a glance. 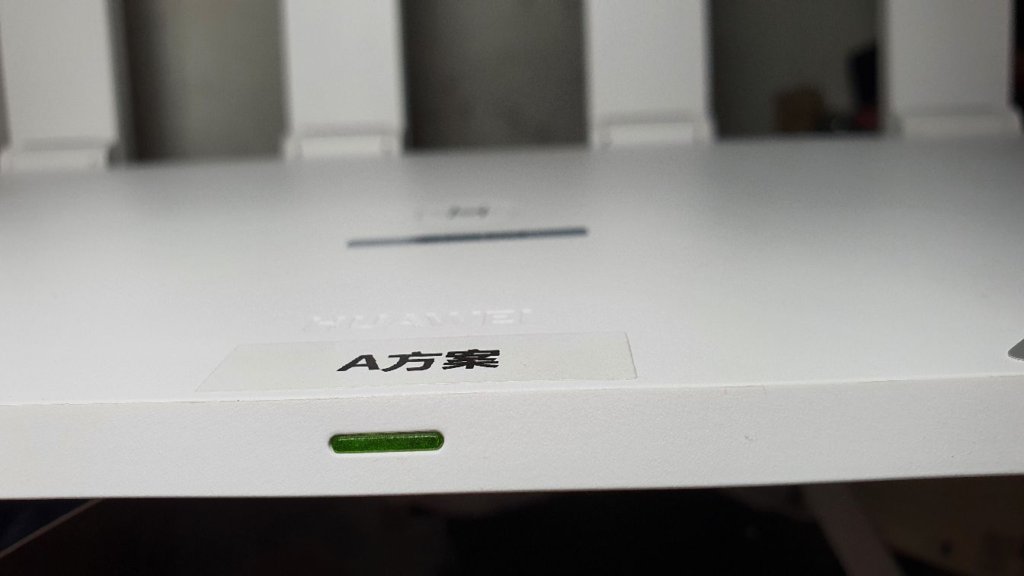 Fortunately, this shortcoming is compensated for as you’re able to check all your diagnostics and manage your WiFi AX3 router via the AI Life app on your phone. The app is downloadble for free at https://smarthome.hicloud.com/d/en/download_guide.html

The rear of the router comes with a host of ports to cover most eventualities with a WAN port, a trio of LAN ports, a power button and a hard reset access port in case things go very pear-shaped.

In terms of specifications, the Huawei WiFi AX3 router is equipped with the following:

The key draw with the Huawei WiFi AX3 router is that it is the world’s first WiFi 6 Plus router. In essence, WiFi 6 Plus is a beefed-up version of the increasingly widespread WiFi 6 802.11ax wireless standards with enhanced speeds and signal strength as well as improved connectivity for Huawei devices.

These enhanced features in the Huawei WiFi AX3 include end-to-end 160MHz channel bandwidth, dynamic narrowband tech to potentially offer up a theoretical speed of up to 3,000Mbps (574Mbps on the WiFi AX3’s 2.4GHz band and 2,401 Mbps on the 5GHz band) and 1024-QAM (Quadrature amplitude modulation) tech to potentially offer a 25% data rate throughput to connected devices.

Even non-Huawei phones that support the current WiFi 5 standards benefit from the WiFi AX3’s features and enjoy a theoretical 60% increase in speeds. The WiFi AX3 also supports OFDMA multi-user tech, allowing for stable data delivery to multiple devices simultaneously with a theoretical maximum limit of up to 4 devices on the 2.4GHz band and up to 16 devices on the 5GHz band with a maximum threshold of up to 128 supported devices. That’s more than enough for almost any household and most small offices. 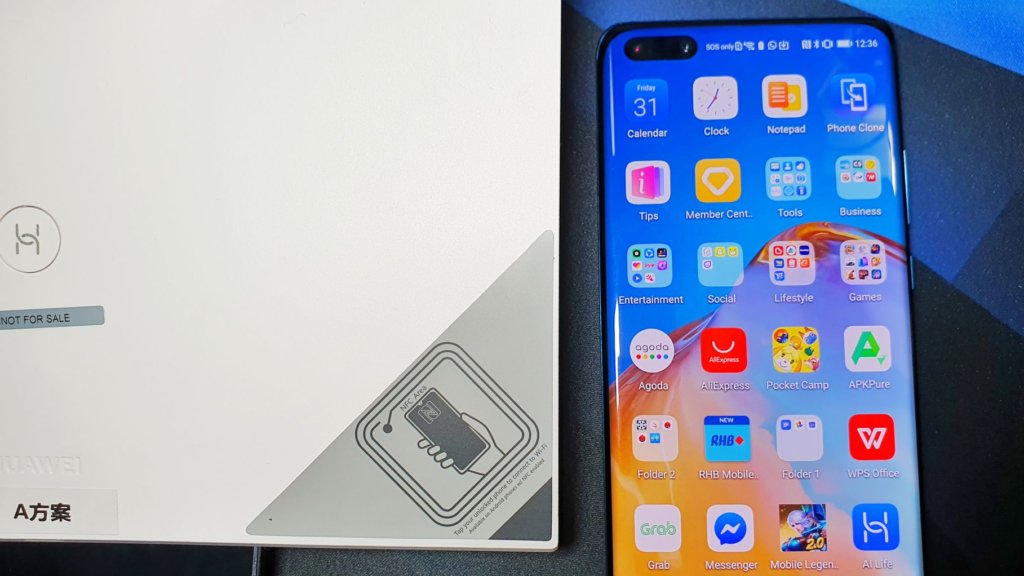 Huawei Share allows you to easily pair up Huawei and Honor phones of recent vintage to the AX3 router so you needn’t have to laboriously key in passwords.

You are effectively able to perform data-intensive feats that would have otherwise have given your old router a coronary like playing competitive Call of Duty: Warzone one laptop, downloading a movie on another and then streaming Netflix on a Smart TV, all at the same time without lag.

Basically, what you get with the WiFi AX3 is a compact router that can potentially offer better signal strength and performance while also being easy to set up which we’ll go into next.

Setting up the WiFi AX3 is rather straightforward and Huawei has made the process even easier. Out of the box, you hook it up to the mains and to your modem before downloading the Huawei AI Life app on either the Google Play store or on Huawei AppGallery.

Unlike the traditional method with older routers which typically require you to hook it up to a laptop to start inputting your settings, the Huawei WiFi AX3 router is able to get up and running with only your smartphone. You can, of course, opt for the traditional method and login via a connected laptop or PC to manually configure your settings but the prevalence in smartphones these days makes their new method significantly more convenient. 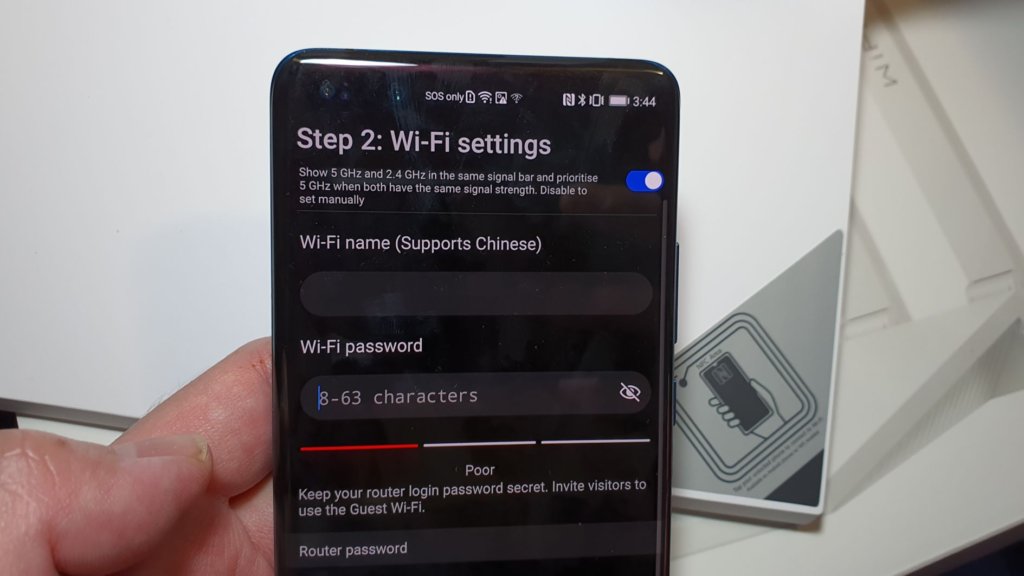 Once the AI Life app is installed and running on your phone, it automatically detects the presence of the WiFi AX3 router and like a very capable concierge, it handles almost all of the settings needed to get it up and running bar inputting your broadband account details and your Wifi account name and password. Once all this is sorted, you’re ready to rock and roll.

The Huawei AI Life app also allows users to tweak multiple settings remotely without having to walk over to the router. Via the Huawei AI Lifeapp, you’re able to view upload and download speeds, check connectivity quality, see the number connected devices, set parental controls, manage updates, network and router settings and also manage guest wifi settings. The fact that you’re able to handle all this from your phone instead of a laptop is a real lifesaver indeed.

For field tests, we hooked it up to a friend’s place with Time fiber in an apartment located in downtown Kuala Lumpur but which was plagued with some dead zone issues especially around the laundry area and the bathroom; sore points for obvious reasons which we needn’t elaborate on.

Our test area is a small studio apartment so it’s somewhat cozy. The Huawei WiFi AX3 router was located in the living room /bedroom/kitchenette. The bathroom itself is set apart from the rest of the apartment by a surprisingly thick door and walls. 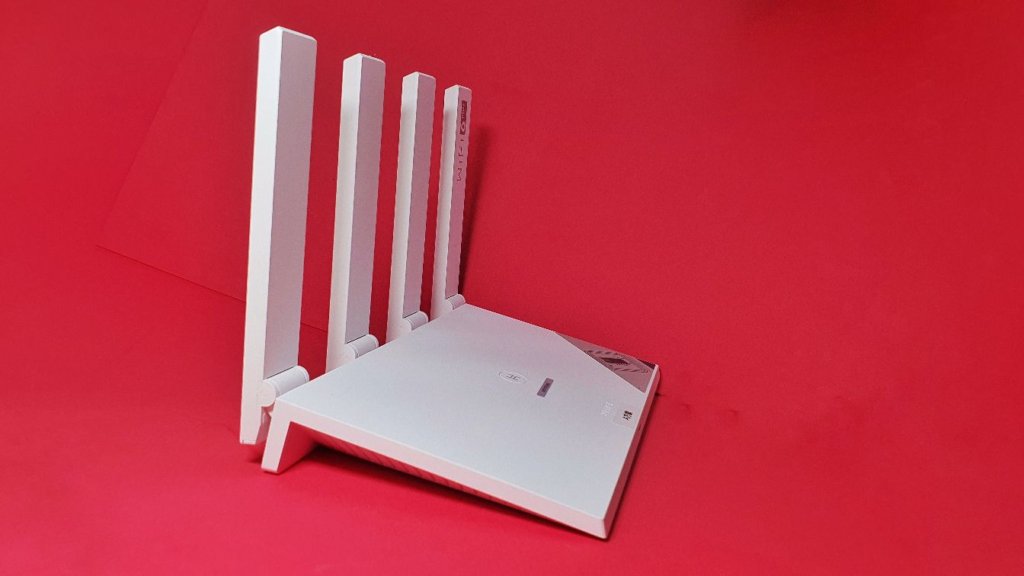 When tested with the old TP-Link Archer c1200 router we got decent speeds in the main living area close to where it is located with a rapid drop in signal quality in the bathroom area especially with the door closed.

When we deployed the Huawei WiFi AX3 router, we noticed tangible benefits with noticeably improved upload and download speeds and better connectivity in the bathroom area.

In the main living area we managed to get an average 120Mbps download and about 95Mbps upload speeds while the bathroom area enjoyed almost double the signal quality at 13Mbps in upload and download speeds which is reasonable to browse the web and pore through YouTube while on the porcelain throne.

To stress test it, we streamed Netflix on a large Smart TV, went through several rounds of Warzone on a laptop and then surfed Youtube on a couple of other phones and all devices maintained a very stable connection. Connecting to the WiFi AX3 router with a Huawei phone was as easy as it gets with us simply tapping a P40 Pro on the Huawei Share NFC chip in the corner to get up and running.

As one of the first WiFi 6 Plus capable routers, the Huawei WiFi AX3 router proves to be a surprisingly pleasant experience that’s easy to set up and run with excellent performance that delivers better signal strength and stability. As routers go, the Huawei WiFI AX3 is well worth a look especially on account of its easy setup and performance.

What we liked Exceptionally easy to set up and deploy, clean and slick design, good performance, WiFi 6 Plus support
What we didn’t More ports would be welcome, no LED indicators for network port
We say The Huawei WiFi AX3 Router offers the latest WiFi 6 Plus connectivity in an easy to deploy, reasonably affordable and attractive looking package. 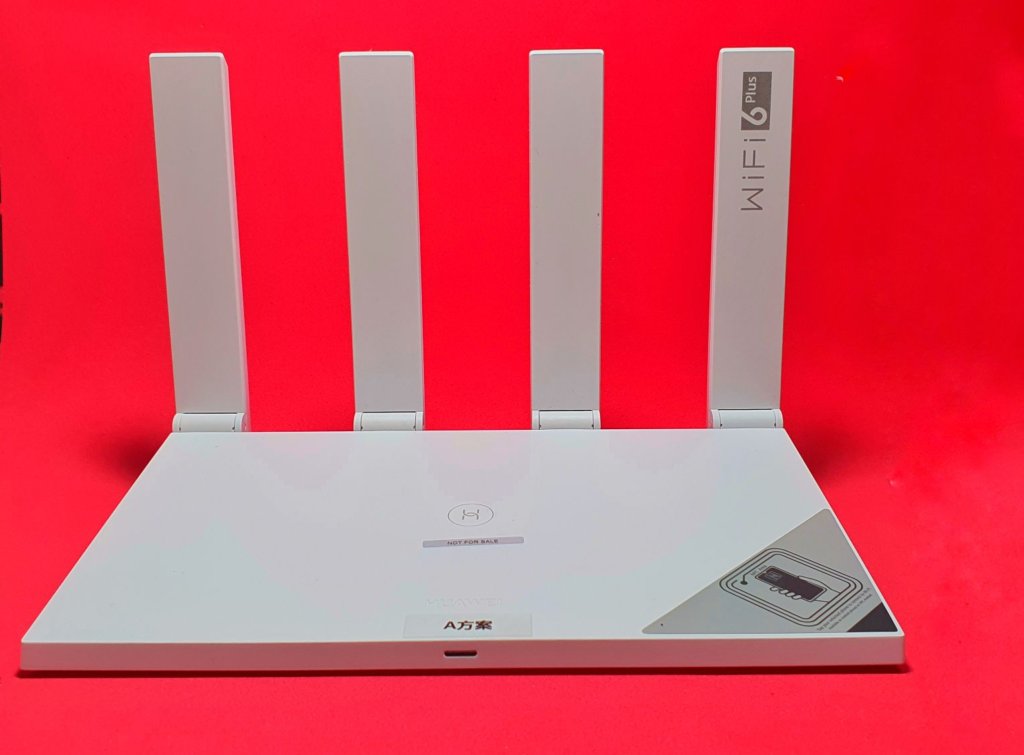 The Huawei WiFi AX3 Router offers the latest WiFi 6 Plus connectivity in an easy to deploy, reasonably affordable and attractive looking package.