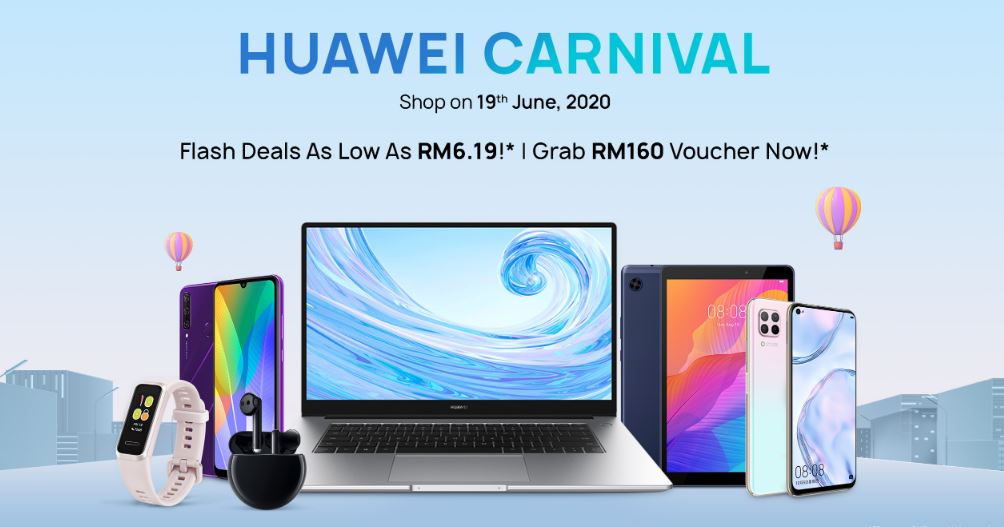 Huawei Malaysia is ramping things up by several notches with their upcoming Huawei  AppGallery Carnival where they will be offering crazy bargains for all their gear from notebooks to smartphones. To make things even more exciting, they’re offering lucky draws worth up to RM2 million and – get this – a special one-day sale on 19th June with even crazier bargains than usual. 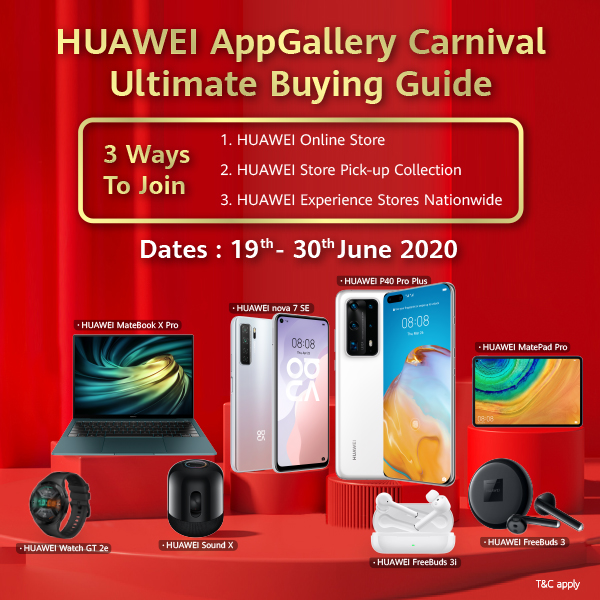 What’s happening on 19th June for the Huawei AppGallery Carnival?

Huawei will be debuting their new nova 7 SE 5G smartphone that is currently the cheapest 5G capable smartphone in Malaysia and the FreeBuds 3i wireless earbuds which sports noise cancellation tech. There’s no official price on these two new devices but they’re rated to be very affordable indeed.

On 19th June, you’ll have to stay up late from 12.00PM to 1AM but the rewards are impressive as you can enjoy discounts up to RM400 off on the nova 7i, the Huawei MatePad Pro and the Huawei MediaPad M6.

The Huawei nova 7i retails for RM1,099 but for this small window of time you can get it for RM869. The same goes for the MatePad Pro which usually costs RM2,399 but which will retail for RM2,199. The smaller MediaPad M6 which costs RM1,899 will cost just RM1,499 which is an RM400 discount along with a free M-Pen stylus. 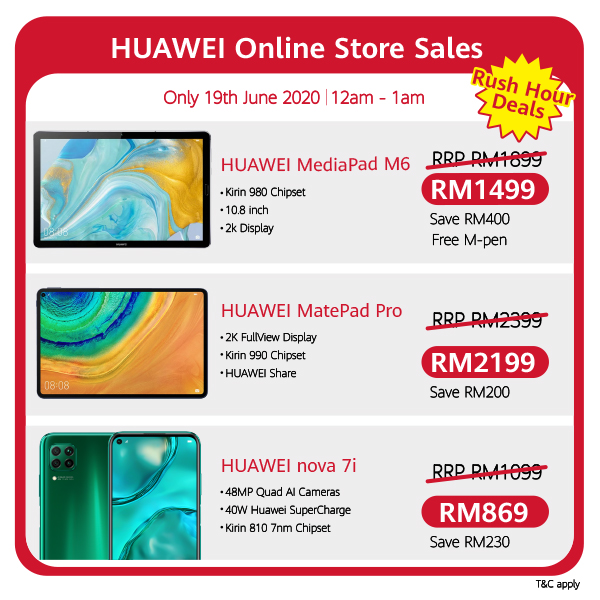 You can also claim an RM160 voucher between 12-19th June on the Huawei online store, on Shopee and on Lazada and cash it in to purchase the P30 Pro, the Watch GT 2, M5 Lite and Free Buds 3 with the aforementioned discount. 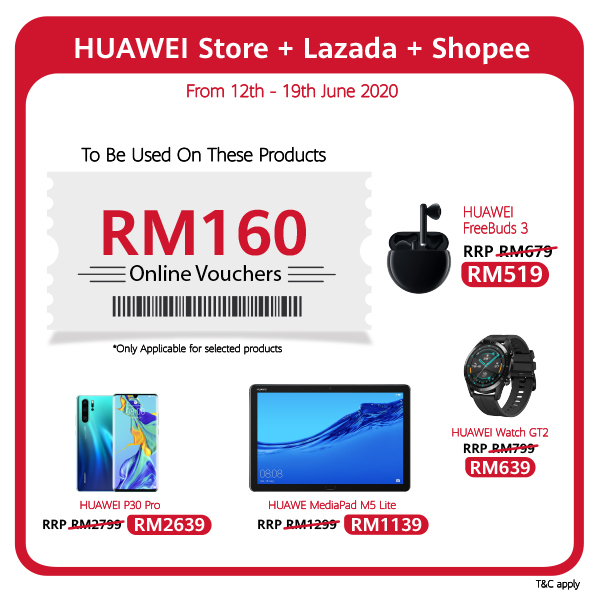 You can get the Huawei AM61 Sport Bluetooth earphone at a bonkers RM61.90, the Band 4 at just RM6.19, the Huawei T5 at just RM61.90 and the Huawei X Gentle Monster Eyewear for just RM619 at 10.08AM on 19th June on the Huawei store and Lazada official online store. The clincher here is that there are limited quantities of each item so you need to be fast on the trigger to get them. 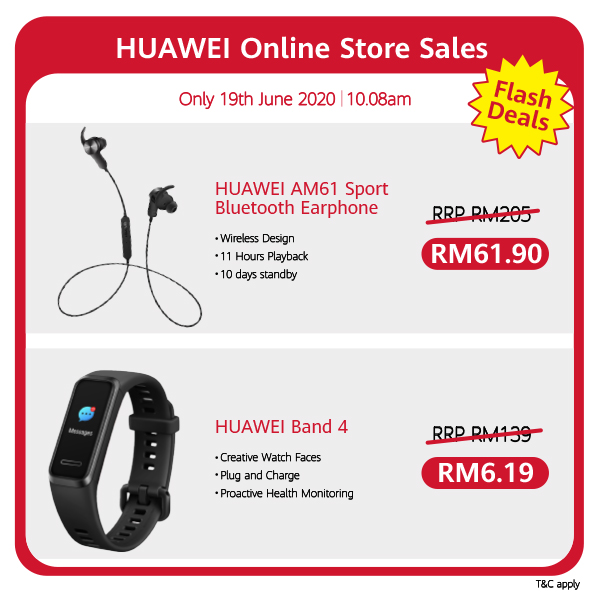 For one day only to kick off the Huawei AppGallery Carnival, Huawei will also offer additional markdowns on their best gear to make it even more tempting.  The Mate30, which retails for RM2,499 will go for just RM1,999 on this special day. 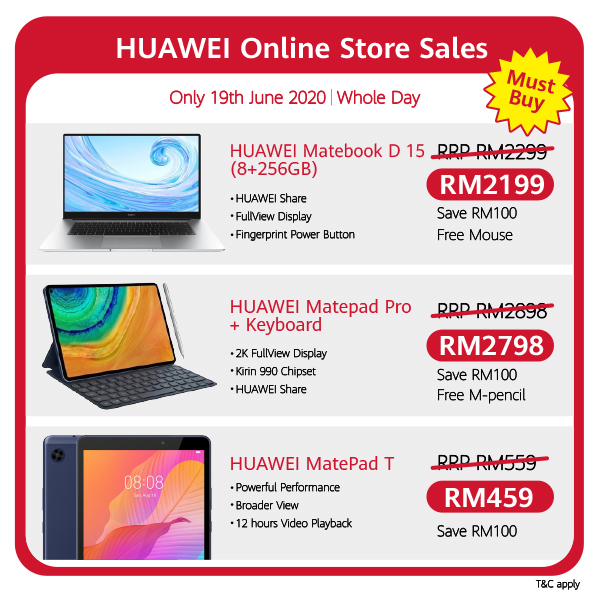 The Mate30 Pro which retails for RM3,599 will go for a staggering RM3,099 which is an RM599 discount. The MatePad Pro premium bundle inclusive of the Smart Magnetic keyboard will retail for RM2,798 (original price RM2,898) and throw in a free M-pencil worth RM299 too. Here’s a summarised table of the good stuff:

For more details on the Huawei Appgallery Carnival, swing by the Huawei online store, Huawei’s Lazada store and Shopee store.