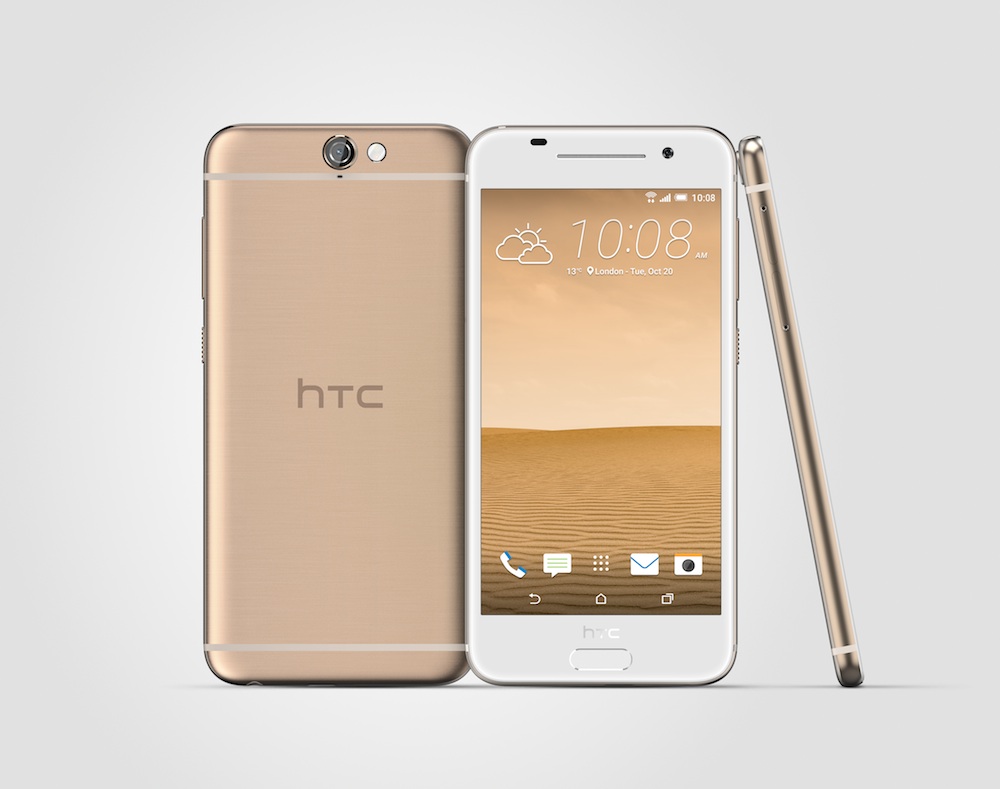 HTC’s recent exclusive event in New York unveiled their latest addition to the One family, the One A9. Its model designation indicates that it’s not related to the earlier M7, M8 or M9 series smartphones or its subvariants like the locally released One M9+ and E9+.

The One A9 in Topaz Gold

The One A9 externally also bears an aesthetic departure from the design of the One M-series smartphones. Dubbed ‘metalmorphics’, the new design comes in four different colours – Carbon Gray, Opal Silver, Topaz Gold and Deep Garnet. As per the usual drill, not all colours may necessarily be released in any given country.

The One A9 in Deep Garnet

The One A9 in Carbon Grey

The One A9 in Opal Silver

On casual inspection, the A9 bears a slight similarity to the latest iPhone 6S’s design language with its curved edges and rounded design. It’s the same weight at 143g though it’s slightly larger all around.

Aesthetics aside, the One A9 has an interesting spec sheet that puts it somewhere between a middling to high-end midrange phone, depending on which subvariant you get. While the One M9+ and E9+ sported MediaTek’s Helios processors, the One A9 instead has gone back to a 64-bit Qualcomm Snapdragon 617 octacore processor that pairs a 1.5GHz quadcore with a 1.2GHz quadcore processor running Android 6.0 Marshmallow with their HTC Sense user interface overlay.

The front display of the A9 comes with a 5-inch Full HD display sheathed in Corning Gorilla Glass 4 for survivability against scratches. Like the M9 series, the A9 has a home button that doubles as a multi-directional fingerprint sensor up front at the base of the phone to unlock it and for payment purposes though the latter feature is not featured in Malaysia.

In terms of memory and storage, the A9 comes in two possible alternate memory configurations depending on which market it’s destined for. One configuration has 32GB of onboard storage and 3GB RAM while the other has 16GB of built-in storage and a more modest 2GB RAM, marking it out as a midrange configuration. Both have microSD slots that can support, according to HTC, up to 2TB microSD cards though the largest you can score in the market is 128GB at the moment.

The rear camera on the A9 has a 13-MP sensor with a sapphire cover lens, an f/2.0 aperture with autofocus, a BSI sensor, and a first for HTC – optical image stabilisation. The front camera is HTC’s proven 4-MP UltraPixel snapper that has an f/2.0 aperture for selfies and good low light performance. Both rear and front cameras are capable of 1080P video recording. Additional features include Hyperlapse time lapse tool to speed up your videos up to 12 times faster to take those epic sunrise and sunset shots. Like earlier HTC phones, you can upload vignettes and snippets to their HTC Zoe service for sharing with friends and family.

Rather than a top and bottom grille design like that seen on the One M-series phones, the A9 instead opts for a subtler look like that seen on the earlier released Desire Eye with hidden front facing grilles that contain HTC’s front facing BoomSound speakers. This time around, the phone has been enhanced with a built-in DAC and Dolby Audio surround tech to allow for 24-bit, 192KHz quality audio playback.

The biggest downfall to any phone – battery life – has been addressed on the One A9 with a more proactive approach by  turning off power hungry or unused apps to prolong the life of its 2,150mAh battery. On paper, it offers up to 18 days of standby time and up to 9 hours of Internet use on Wi-Fi. The battery is also able to support Quick Charge 2.0 and is also forward compatible with Quick Charge 3.0.

While no firm dates have been set, the One A9 is set to hit retailers the world over in November. More details when HTC Malaysia announces a local launch.To recap, here’s the One A9’s specifications below. You can also check it out at HTC’s website here There’s no word on local pricing as yet but it’s retailing for US$400 (RM1696.97)  in the States for the 32GB/3GB RAM version and, oddly enough an eye watering £430 (RM2,800) for the lower end 16GB/2GB RAM version in the UK .

Posted in Tech and tagged HTC, OIS, One A9, Snapdragon