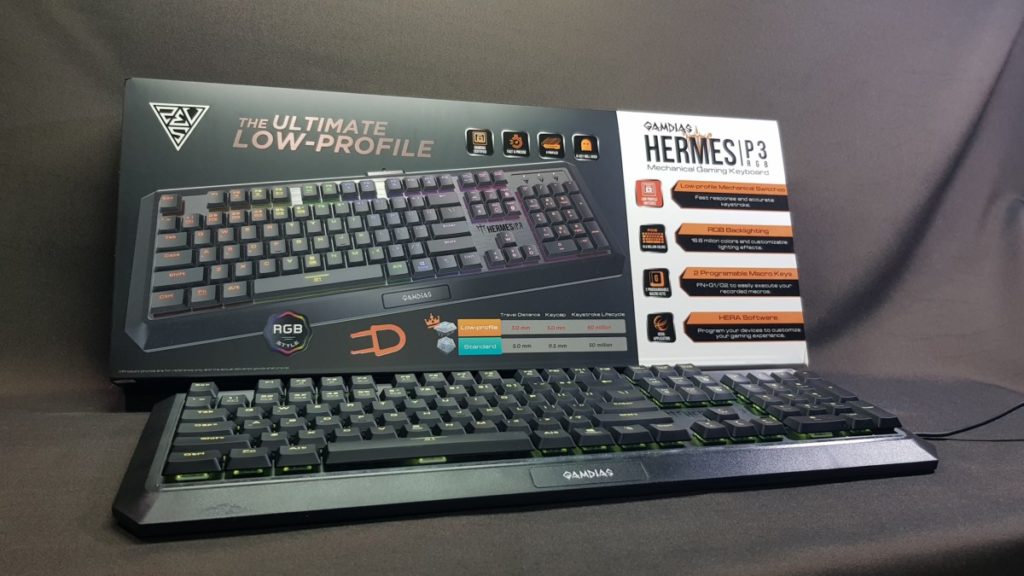 Much like handbags, keyboards are still very an individual choice with a veritable plethora of variants on the market in terms of price, aesthetics and functionality. The Hermes P3 RGB Mechanical Gaming Keyboard is the latest offering from Gamdias that claims to be the world’s fastest gaming keyboard without boasting of a commensurately impressive price tag.

The Gamdias Hermes P3 keyboard comes in a sturdy cardboard box with a printed sleeve that espouses all of its sundry virtues boldly all across the front, sides and back. Bar the keyboard itself, the box also comes with a key puller should you feel the need to yank a key or two out for maintenance.

The Gamdias Hermes P3 is made of a combination of matte black plastic encased around a flat slab of aluminium. The beveled sides, and underside are all encased in plastic that has a finish that repels fingerprints. It also has a pair of plastic feet on the underside to prop it up at an angle as needed. 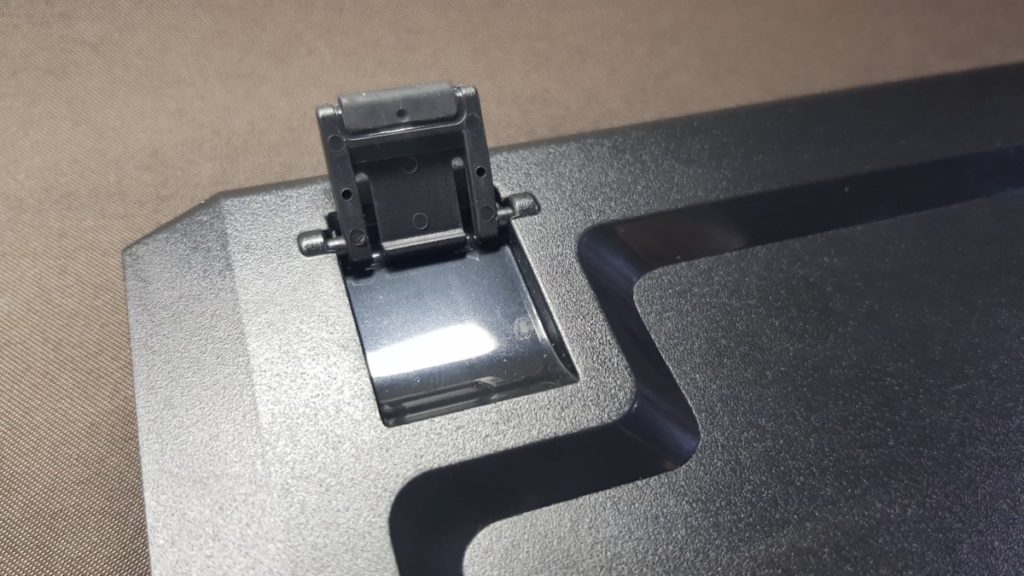 In terms of layout the Hermes P3 follows the otherwise standard 104-key US-style QWERTY layout bar a few notable differences. The Windows key is relocated to the right of the spacebar while the numbers 1 through 6 just above the keyboard are assigned additional functions that allow you to directly change the lighting pattern of the Hermes P3 on the fly to one of six patterns. The keyboard also has two programmable macro keys that you can string a series of macros together that primarily function as the B key and the spacebar when otherwise not in use. 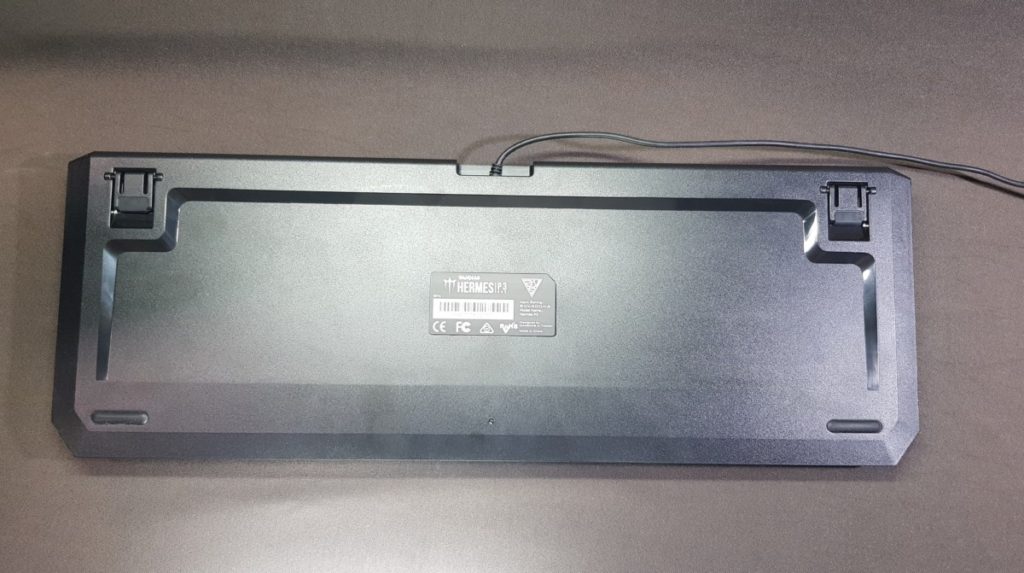 The Hermes P3’s claim to fame are it’s low profile Kailh blue mechanical switches that are emplaced lower than usual keyboard buttons and which have a much shorter 3.0mm travel distance along with an impressive 60 million keystroke lifecycle which will likely outlast you. 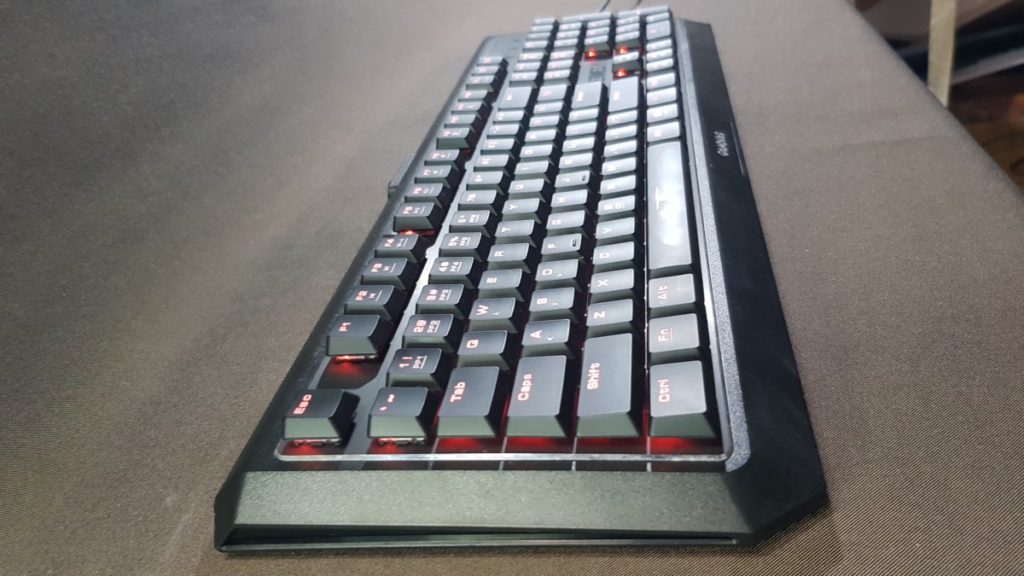 Each mechanical switch is also backlit with the capability to light up in up to 16.8 million colours and the aforementioned six selectable lighting effects though you can further finetune this with their HERA customisation software to create custom lighting layouts to your heart’s content. The general idea on implementing the shorter travel distance in the Hermes P3 is that it takes less of a distance to press a button on the keyboard to fully activate and you thus get a faster response which then leads to, by logical extension, better and swifter in-game performance.

Rather than recessing or sheathing it in plastic, the Hermes P3 has the switches placed on an otherwise flat plate of aluminium. This means that cleaning all the muck, crumbs and whatnot from your keyboard is a darned lot easier down the line. Unfortunately, the keyboard is by no means splashproof or crumb resistant; it’s the fact that the bases are exposed that allows for easier cleaning if dirt and crumbs inevitably drop between the keys. 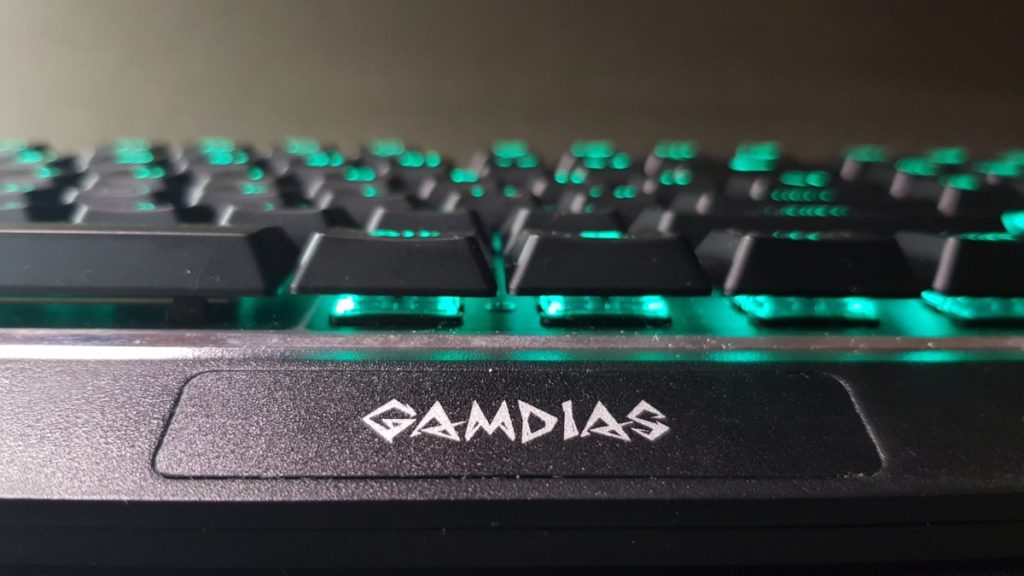 To keep things ticking along nicely under the hood, the keyboard has a 32-bit ARM Cortex processor paired with 72kb of memory to save macros, profiles and custom key settings via their own downloadable HERA customisation software. Also available with the Hermes P3 is N-key rollover and anti-ghosting support. 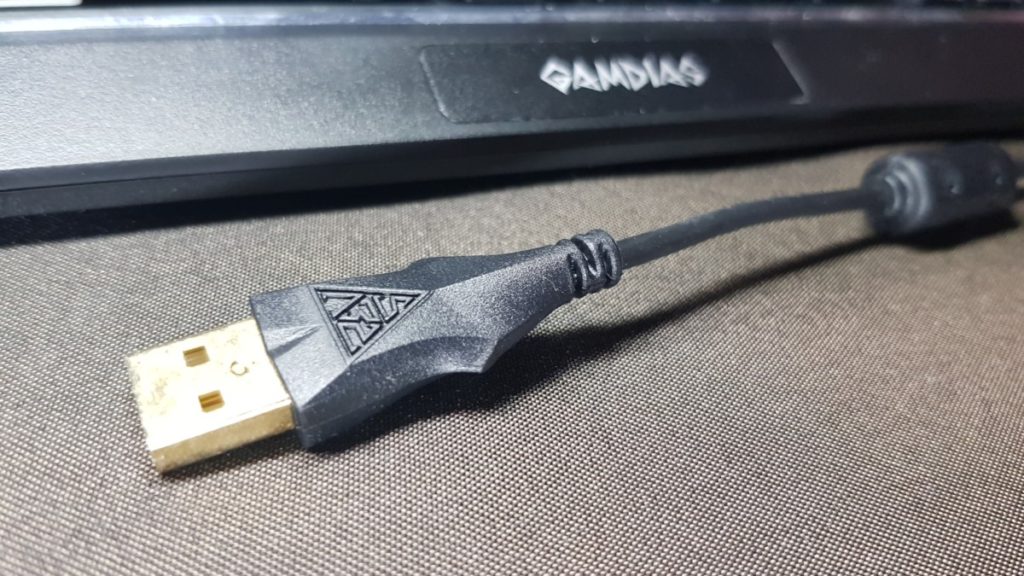 One quibble with the design here is the cable. Rather than braiding it in hard-wearing fabric, they’ve just opted for a rubber sheath that detracts from the rest of the otherwise slick design. The USB port itself is gold-plated and has a slight flange on the handle to make it easier to pull out. Fortunately, the cable is long enough that it will accommodate all but the most unusual desktop setups at about 1.5 meters or so. Buttons aside, the Hermes P3 is an otherwise sturdily constructed and pragmatically designed mechanical keyboard at first blush.

The Gamdias Hermes P3 was put to the test across a variety of gaming and work scenarios across the course of a month. Like someone driving stick from an auto, there’s a period of acclimatisation to get used to the lower profile keys. Those used to membrane keyboards or those with higher profile keys will need to get used to not having to press as vigorously to obtain a result though once you get the hang of it, key presses are markedly swifter and surer.

The Hermes P3 isn’t the quietest keyboard in the market but each button press has a reassuring click that lets you know you’ve whammed the button down. 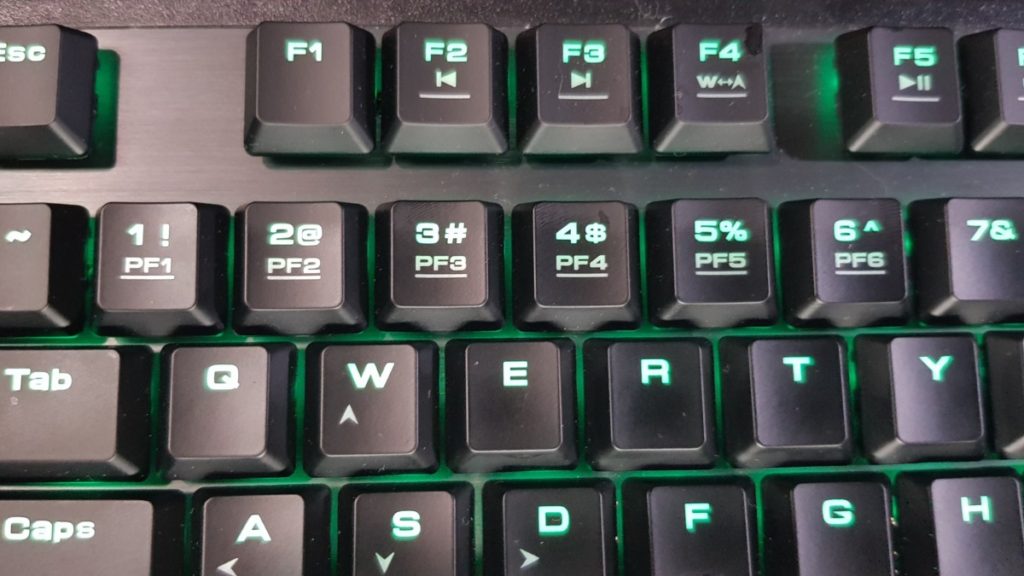 In Far Cry 3 and Black Ops 2 multiplayer deathmatches, our kill/death ratios dropped a bit before they went back up to their customarily banal standards. The six stock lighting effects are purely for aesthetics and do little to improve your gameplay. Out of the box, the default lighting effect is for the entire keyboard to slowly pulse through the colour spectrum. It’s a soothing effect but has little tactical value in and of itself though it does look nice in a darkened room.

In King of Fighters 2002, the Hermes P3 proved very serviceable and did not display any complications even with half a dozen keys whammed down; something that happens in fighting games quite often and all the special attack combos we executed ran in sequence without issue though that didn’t help our abysmal gaming skills.

Fortunately, you can tweak things somewhat aesthetically with HERA, Gamdias’ keyboard customisation software that’s downloadable for free though your mileage will vary depending on how much effort you put in to create a custom lighting setup on the Hermes P3. You can also add in two customisable macros triggered by the B and spacebar key as needed. These macros will most likely come in handy for repetitive tasks in MMOs or whatnot. In actual field use for paperwork, the Hermes P3 in general offered a modest improvement in terms of typing speed with no major anomalies in terms of the frequency of typos bar the initial learning period. 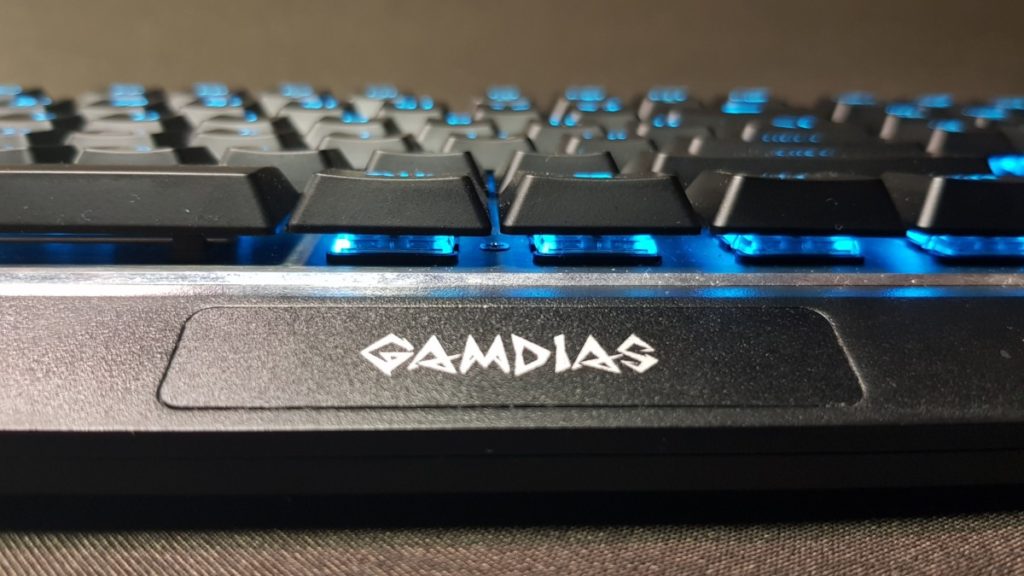 At RM499 the Gamdias Hermes P3 RGB gaming keyboard is approaching premium territory and it justifies it for the most part with decent build quality though minor niggles like the plasticky cable and dearth of customisation options that cap out at two macros tops means it’s something that you ought to try before you buy. For more details on where to acquire the Hermes P3, swing by their official Malaysia site here.

What we liked Layout is clean and easy to maintain, bright and variable lighting effects, swift key actuation
What we didn’t keyboard cable not braided, only two programmable macro keys, not splashproof
We say A low profile gaming keyboard that does what it says on the tin with fast key actuation and a clean layout though the premium price means you ought to try before you buy