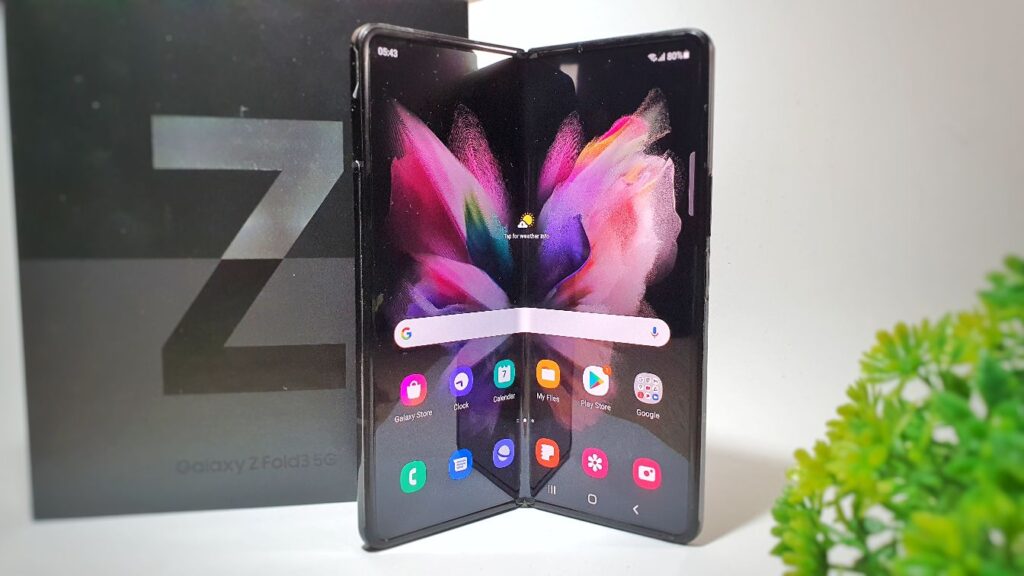 The star of the show at Samsung Unpacked 2021, the Samsung Galaxy Z Fold3 5G is Samsung’s latest foldable phone that is chock full of some jaw-dropping technologies that not only make it the most powerful foldable phone on the planet but also the world’s first water resistant one too.

Currently on preorder in Malaysia, the Galaxy Z Fold3 5G represents the pinnacle of their engineering prowess alongside the new Galaxy Z Flip3 5G that is intended for more lifestyle oriented users. 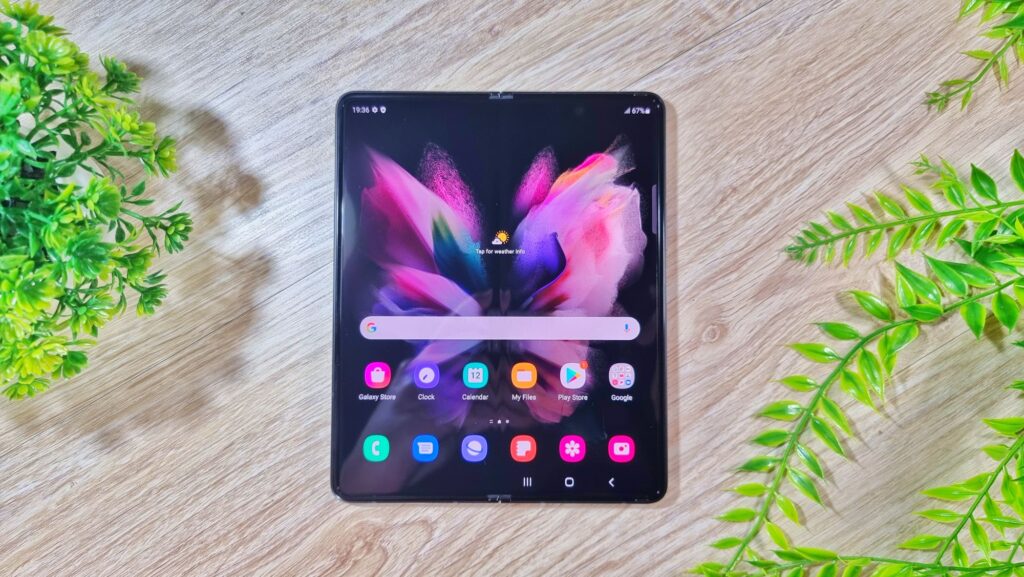 We managed to get a sample for review to see if it truly matches up to the hype. Here’s our Samsung Galaxy Z Fold3 5G first look and hands-on where we get our initial impressions of their wunderkind uberphone.

In keeping with Samsung’s philosophy to ensure more sustainable products in the field, the phone ditches the customary wall charger and instead comes with a minimum of kit that also makes the packaging exceptionally light, compact and flat.

In fact, it was so light, weighing as it did at 271g and so flat that it’s easily able to pass scrutiny as a phone in courier packages. When I picked it up from the delivery guy, I actually thought it was a box of chocolates I ordered a while back. 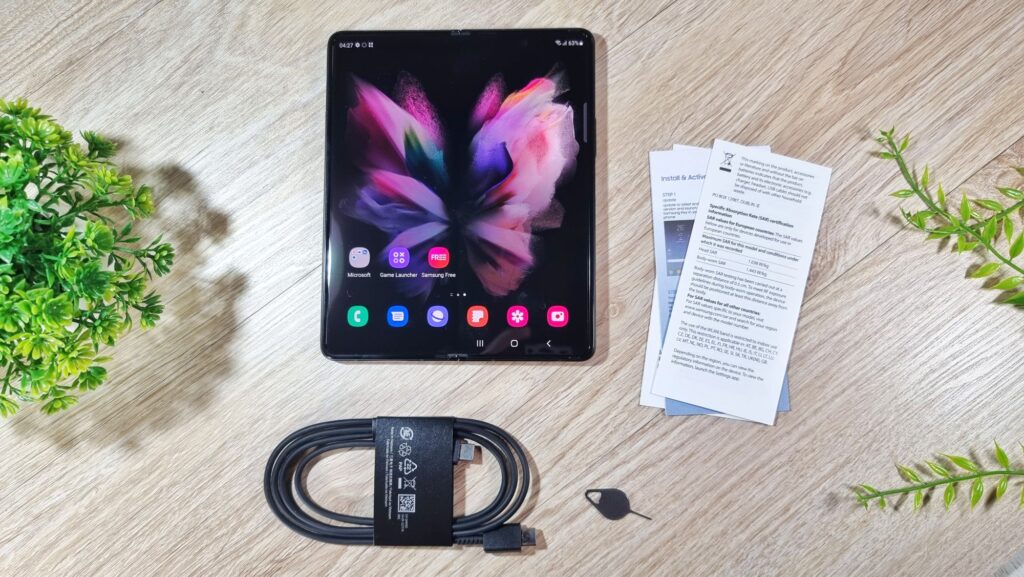 The Samsung Galaxy Z Fold3 5G features a SIM eject pin, some literature and a USB-C charging cable in addition to the phone itself in the box.

On top of sustainable soy ink packaging, the Galaxy Z Fold3 5G is wrapped in a protective plastic sleeve in its unfolded configuration. Layered beneath it is a SIM eject pin, a USB-C to USB-C charging cable and a quick start manual. You will need your own wall charger to juice it but in this day and age, it’s highly likely you’ll have one puttering about from an older phone though you’ll need one with at least 25W charging to take advantage of its Fast Charging support.

Our sample of the Galaxy Z Fold3 5G came in a shade that they’ve designated as Phantom Black though you can also get it in Phantom Green and Phantom Silver. Our Galaxy Z Fold3 5G in Phantom Black comes with a matte black paint job with a contrasting chromed hinge and some slight silver accents around the primary rear triple camera housing. The whole effect is classy and understated which befits its role as Samsung’s most powerful flagship device to date.

When lifted out of the box, you can immediately feel the immense polish that they’ve lavished on the phone. It’s not all pure aesthetics though as they’ve spared no expense in upgrading the Fold3 with an emphasis on making it more durable for daily use. 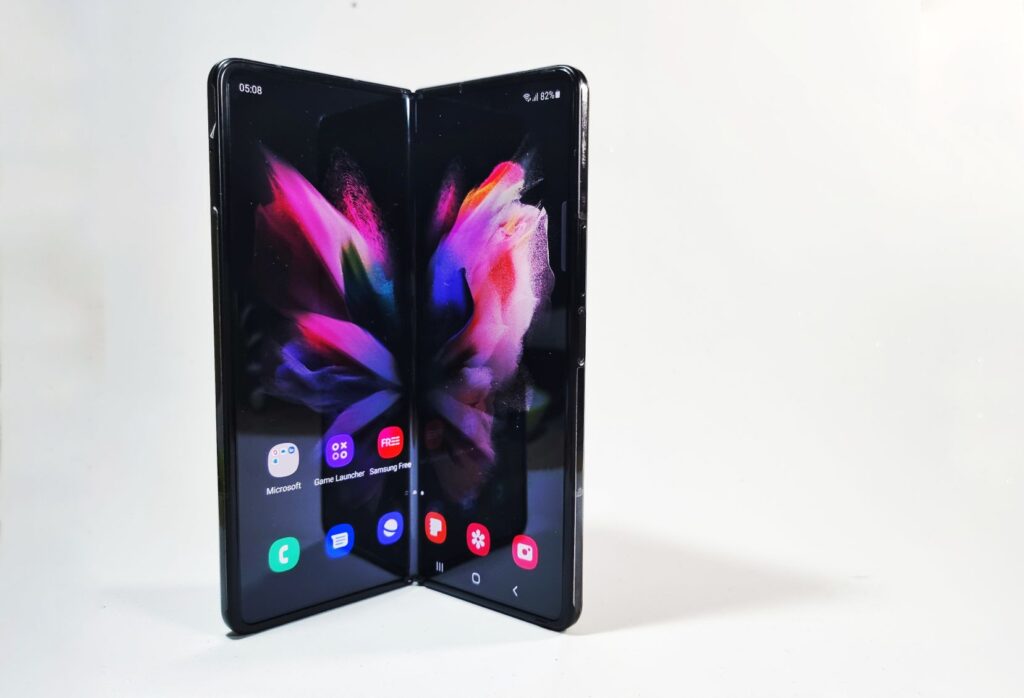 For starters, they’ve hewn the chassis out of a new amalgam of metals that they call Armor Aluminum which is 80% tougher than the conventional aluminium used in other phone chassis. Added to this, they’ve slapped on Gorilla Glass Victus on the front screen and backplate which is currently the toughest grade of glass you can slap on a phone to resist scratches and nicks.

Unlike its predecessors, Samsung has managed to accomplish the feat of giving the Galaxy Z Fold3 5G an IPX8 water resistance rating. This means that it’s effectively able to survive and work in 1.5 meters of freshwater for up to 30 minutes at a time. While it is water resistant, it’s not dust resistant so some level of care is needed to avoid dusty or sandy environments like the beach. 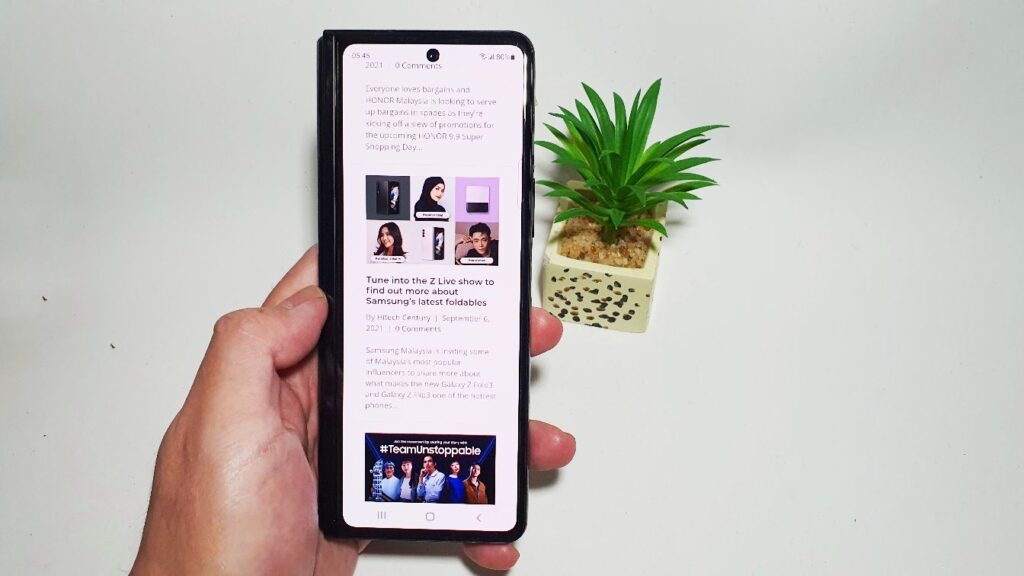 The front Cover display of the Galaxy Z Fold 3 5G is compact enough to be used one-handed.

The front of the phone when folded down hosts a 6.2-inch HD+ Dynamic AMOLED 2X Cover display with a tall, somewhat narrow 24.5:9 aspect ratio and a respectable 387 pixels per inch.

While it’s the same size as the older Fold2, the new display here is a massive improvement as it has an ultra smooth 120Hz refresh rate that’s identical to the 7.6-inch display. Perched in the upper centre portion of the Cover display in a modest cut-out is a 10MP cover camera for selfies and video calls.

One thing to note is that the Galaxy Z Fold3 5G has non-expandable memory – you’ll have to work with what you have – but the two existing storage variants available: 256GB and 512GB offer plenty of space for even the most demanding user.

Located on the base of the phone is a USB-C port for charging and docking duties. It also hosts one of a matching pair of speaker grilles with the other one located at the top of the phone. Both speakers are beefed up with Dolby Atmos tech to offer deeper richer sound.

Unfortunately, there’s no 3.5mm audio jack on the Galaxy Z Fold3 5G but that’s also been the case for its predecessor as well and it’s not as big of an issue anymore seeing the prevalence of solid wireless earbuds like the Galaxy Buds2. 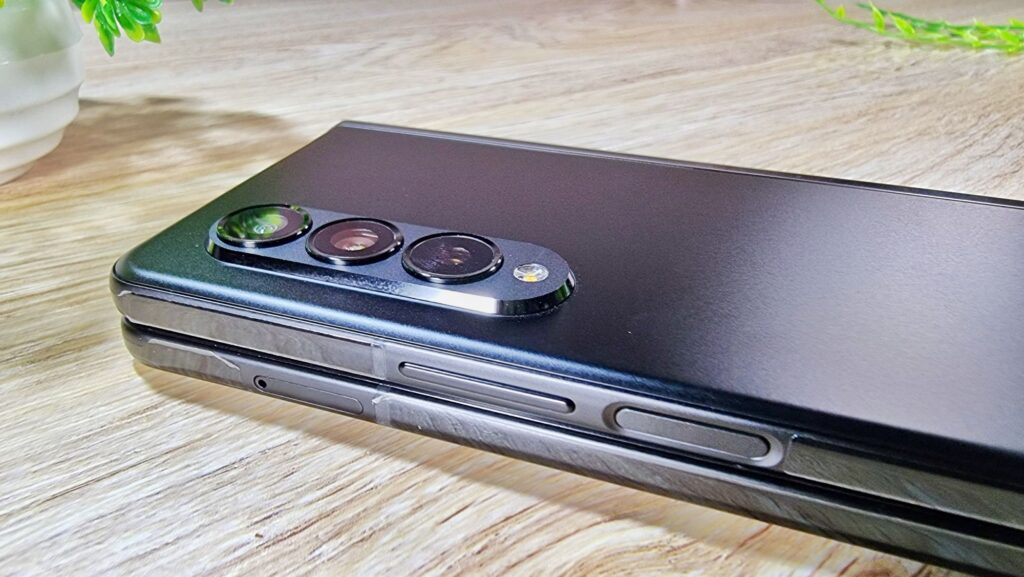 The back of the phone houses the primary triple camera array which consists of three 12MP cameras, a 12MP primary camera with Dual Pixel autofocus and OIS, another 12MP ultra wide camera and a third 12MP camera with 2x optical zoom and OIS. 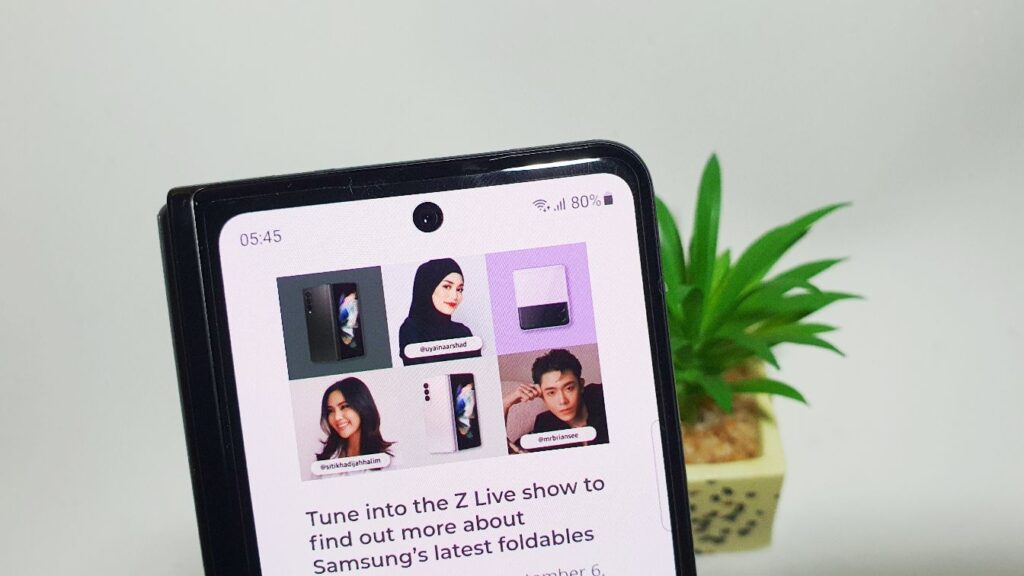 They’ve tastefully added a subtle Samsung logo along the hinge cover itself while ensuring the backplate is otherwise untouched. To their credit, the matte finish looks posh and also repels fingerprints wonderfully. 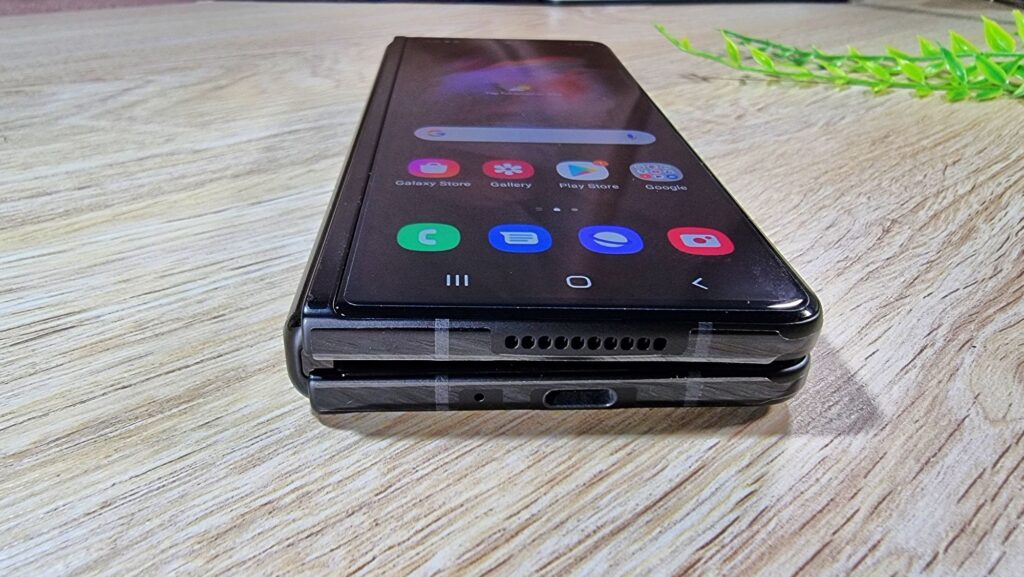 When viewed from the side, there’s still a tiny gap between the hinges and both halves of the display but it’s been narrowed down from its predecessor.

When folded down, the Galaxy Z Fold3 5G is still a rather chunky phone but it’s nonetheless slim enough to still slide into a pocket and is small enough for one-handed use. Of course, using it this way all the time is like getting a Ferrari and only driving in first gear and it’s only by opening it that you get to see what the Galaxy Z Fold3 5G is all about.

Opening the Galaxy Z Fold3 5G is quite an experience with the precisely engineered hinge offering just enough resistance to allow it to stand up halfway up unaided which is needed if you aim to use it in Flex mode which we’ll get into later. The hinge mechanism is not designed to be able to be open one-handed though and you’ll need both hands to flip it open. 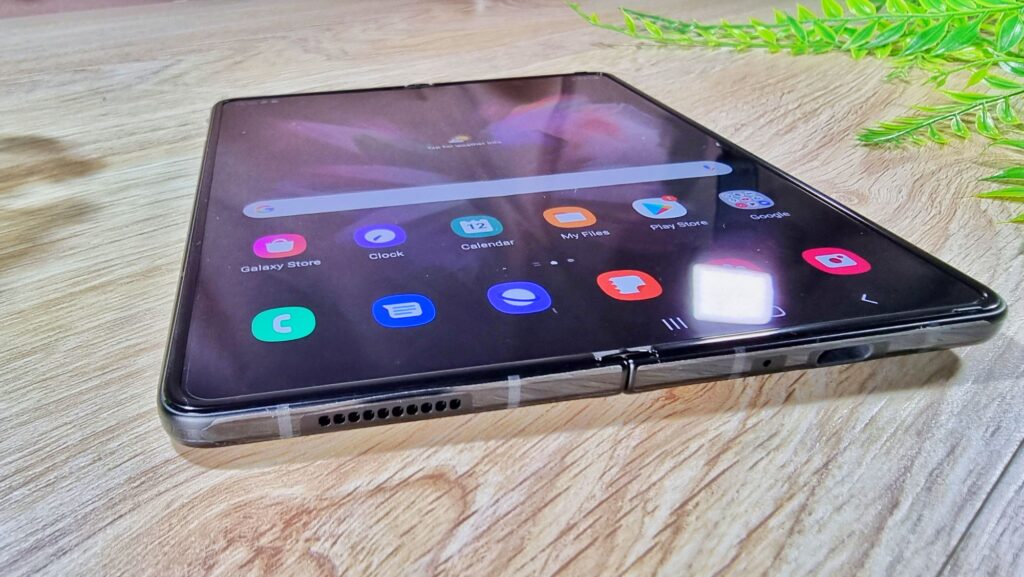 When unfolded, you get to gaze on the main draw of the phone – a 7.6-inch (2,208 x 1,768 pixels) Dynamic AMOLED 2X display with HDR10+ support that’s sheathed with a tough and scratch resistant PET top layer and a 120Hz refresh rate equal to the Cover screen. The squarish 25:9 aspect ratio makes it ideal for multitasking with the ability to put up to three windows simultaneously onscreen at a time if you deign to do so.

It also has a 4MP Under Display camera that seemingly disappears unless it’s called into action. The Under Display camera itself is really only apparent if you’re watching something that has a purely white background whereupon you can see a hexagonal moire effect where the camera lens is but by and large, you’ll hardly notice it in daily use. 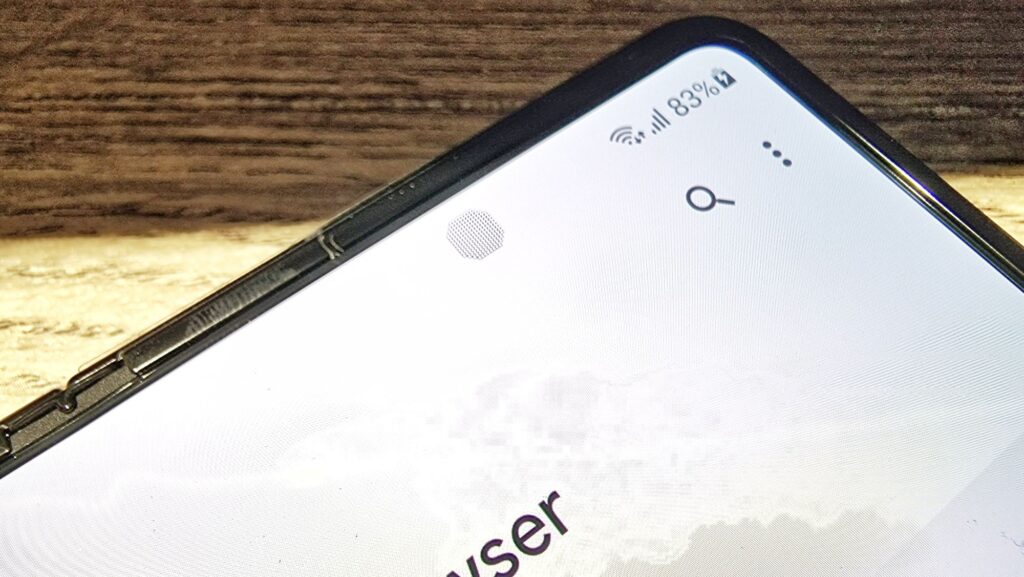 On top of the 120Hz refresh rate and enhanced durability, the main display’s star attraction is that it has support for an S Pen stylus though only two – the S Pen Fold Edition and the S Pen Pro are designed to work with it as they both have spring-loaded retractable nibs to safely interact with the PET-sheathed display.

At first blush, the sheer size of the main display is initially daunting but once you’ve gotten over that, you’ll begin to appreciate the amount of space available to work with for multitasking, aided substantially by the tweaks they’ve made to One UI to allow it to display up to three windows onscreen at the same time.

In terms of hardware, the Samsung Galaxy Z Fold3  is armed for bear with a potent flagship-grade Qualcomm Snapdragon 888 processor running under the hood paired with 12GB RAM and either 256GB or 512GB of onboard non-expandable storage.

It also hosts a 4,400mAh battery split into two smaller batteries on both halves of the phone, sandwiched in between graphite sheets along with the processor itself to shunt heat from important areas. Connectivity is comprehensive with 5G (standalone and non-standalone), WiFi 6E, Bluetooth 5.2 and Ultra Wideband (UWB) support that was first pioneered on the Note20 Ultra.

This array of hardware allows it to tackle any task asked of it and running multiple apps, browsers and gaming on the phone was a smooth affair. Here’s a summary of what it has under the hood:

What makes it truly different though is that you can fold the phone halfway up into Flex mode so that you can prop the phone up on a flat surface to take advantage of the cameras for time lapses, video calls and the like and selected apps like YouTube which split the user interface in half so that you can view comments in the bottom half and watch the video in the upper half.

On top of taking advantage of the cameras, Flex mode also allows you to prop the phone up anywhere without need for a stand to watch videos which comes in surprisingly handy. 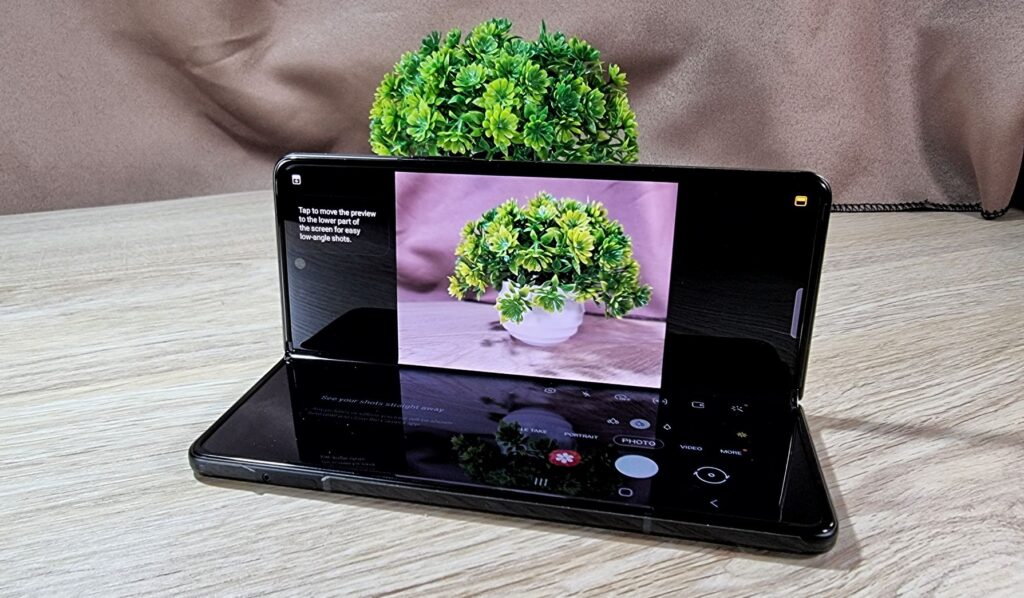 Holding and wielding the phone made for a wonderful experience. Granted, it’s almost twice as thick as a conventional phone like the Galaxy S21 Ultra, the Galaxy Z Fold3 5G is also functionally more versatile as you have both a phone and a tablet in one form factor. The hinge itself also feels reassuringly sturdy with the whole affair looking absolutely the business.

On our first run through, the crease in the middle of the main display looked and felt less obvious than its predecessor and it’s something you’ll gradually ignore over time but it does not affect image quality or performance for the display itself.

The Samsung Galaxy Z Fold3 5G and the Galaxy Z Flip3 5G are both available for preorder until 21st September in Malaysia with a host of free gifts and perks worth up to RM1,649 with e-vouchers worth up to RM850 to get Samsung accessories on their Samsung Malaysia Online Store and Samsung Care+ protection worth up to RM799 free for a year.

Stay tuned for our full review when we put it to the test!