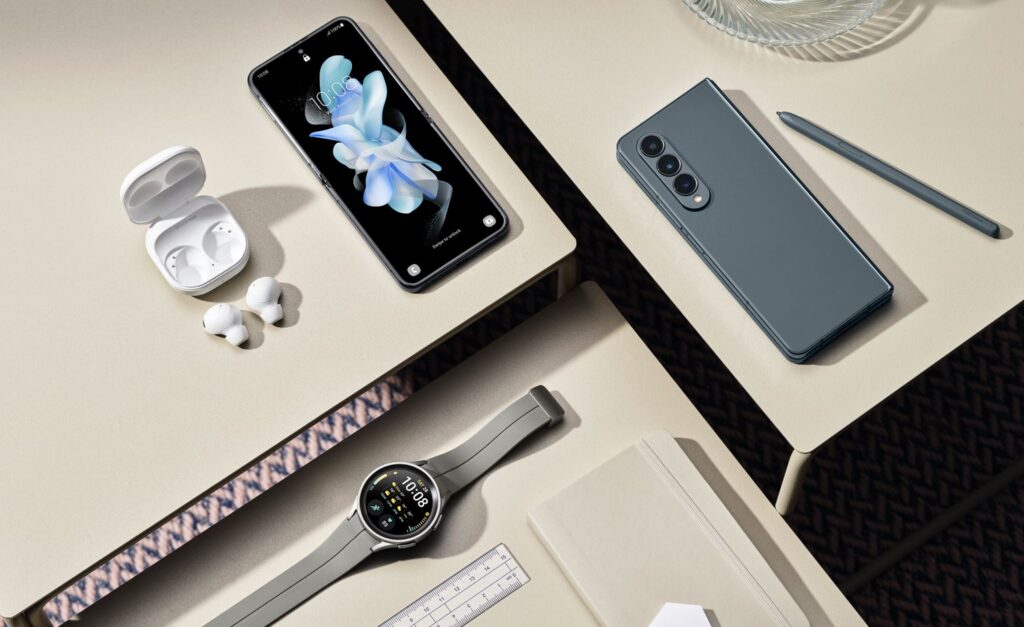 The fourth generation foldable from Samsung, the Galaxy Z Flip4 and Galaxy Z Fold4 retain similar form factors as the Galaxy Z Flip3 and Fold3 but feature a more refined hinge design, less visible creases on the folding displays, with slightly wider aspect ratios along with the customary upgrades to specifications including better cameras, better processors and enhanced features across the board. 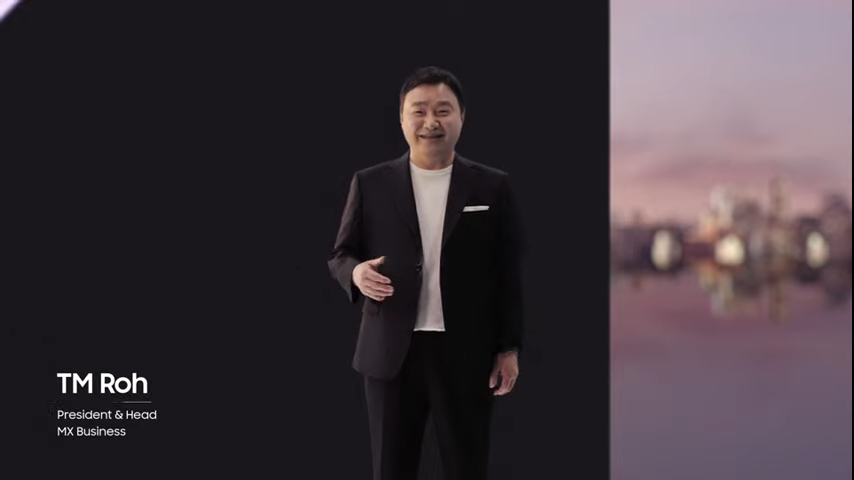 What is the Galaxy Z Fold 4

The new Galaxy Z Fold 4 has a 6.2-inch HD+ 120Hz  Dynamic AMOLED 2X Cover display and 7.6-inch QXGA+ 120Hz Dynamic AMOLED 2X display that’s similar in size to the older Galaxy Z Fold 3 but both displays have slightly wider aspect ratios and the main folding display is protected by their latest incarnation of their Ultra Thin Glass with a rated 200,000 opening and closing folding sequences which means the phone will last for years to come. 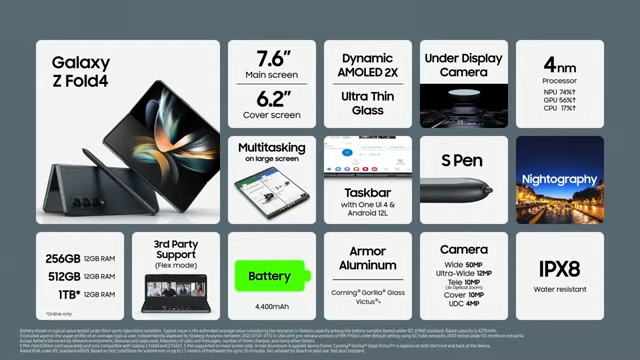 The hardware under the hood consists of a Snapdragon 8+ Gen 1 processor running Android 12L, 12GB RAM with up to 8GB of RAM Plus virtual RAM and this time around, Samsung is offering it in 256GB, 512GB and up to a whopping 1TB of storage depending on region. 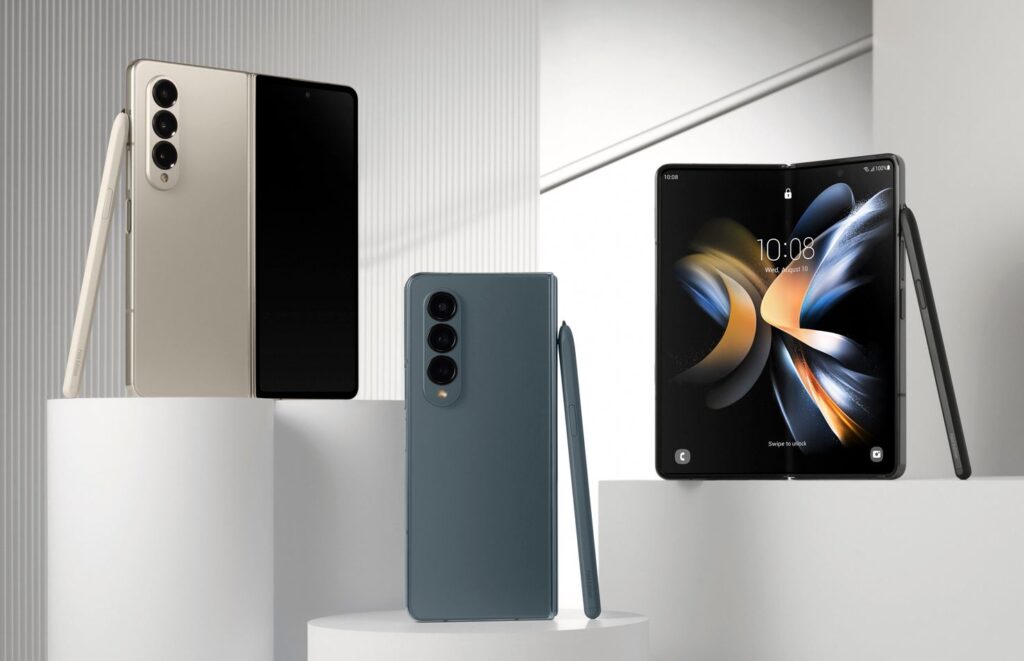 The rear camera is of note as it uses the same hardware as the Galaxy S22 with a 50MP primary camera with OIS, a 12MP ultra wide camera and a 10MP telephoto camera with 3x optical zoom. The front Cover display has a 10MP selfie camera and the Galaxy Z Fold 4 has a 4MP under display camera that’s more invisible than its predecessor. Keeping it powered is a 4,400mAh with 25W fast charging. Unfortunately, the phones lack a built-in stylus well but you can acquire an SPen stylus separately to pair with the Galaxy Z Fold 4.

You can also check out our more in-depth rundown of the Galaxy Z Fold4’s specifications here. Prices at the Unpacked were revealed to start from US$1,799 and up. 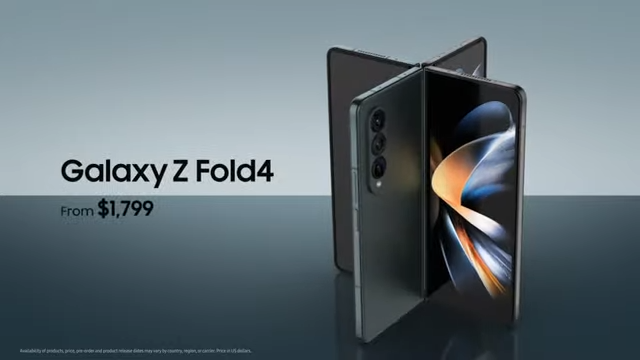 What is the Galaxy Z Flip 4

The mainstream Galaxy Z Flip 4 is slightly slimmer and thinner than the Galaxy Z Flip3 and notably has a 512GB variant with more storage on top of 128GB and 256GB storage options. 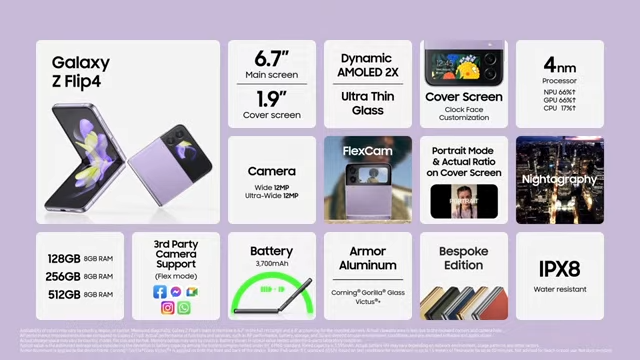 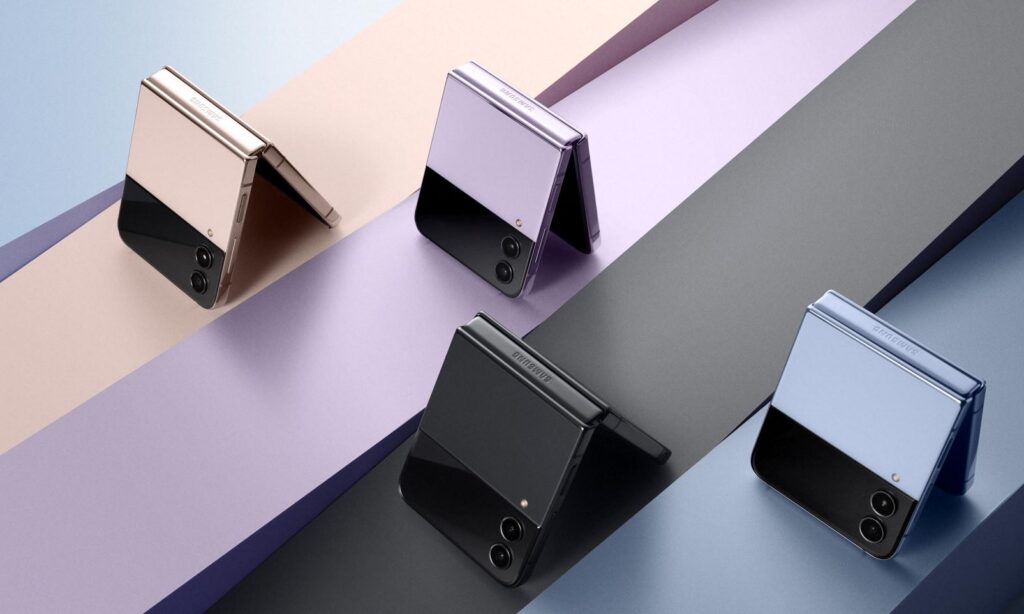 The phone runs the latest Android 12 under the hood with One UI 4.1.1, has 8GB RAM across the board with up to 8GB of RAM Plus virtual RAM. Storage consists of your choice of 128GB, 256GB and 512GB of non-expandable storage. Keeping the phone powered is a larger 3,700mAh battery that’s 12% larger than the Flip 3 with the customary 25W fast charging, reverse wireless charging and wireless charging. 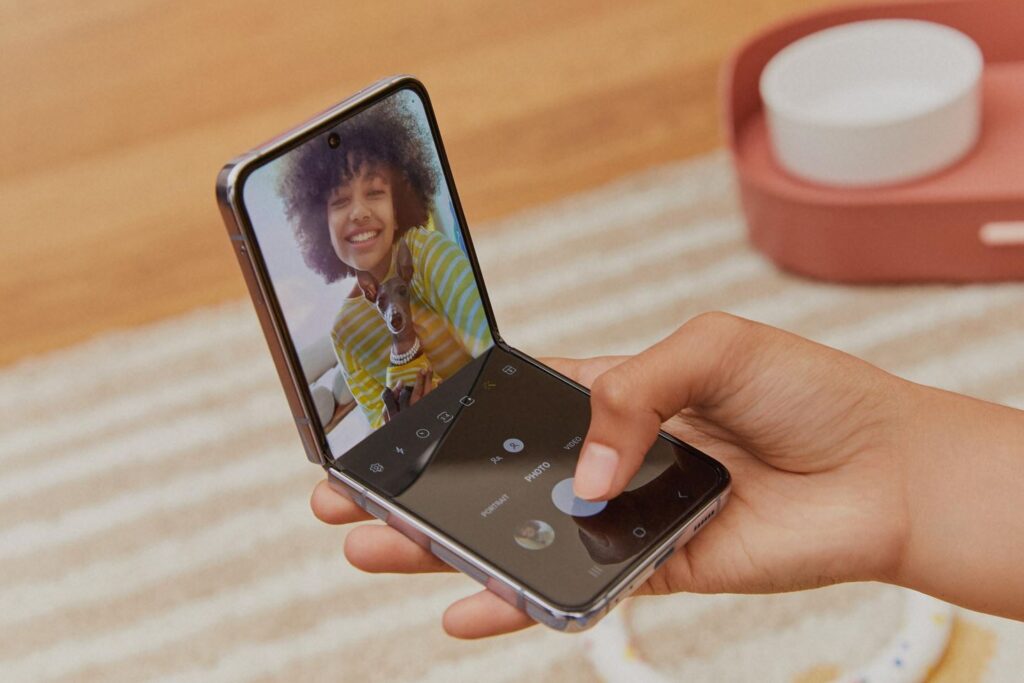 The Galaxy Z Flip 4’s primary dual camera is still a 12MP primary camera with OIS with an upgraded and larger 1.8um pixels on the sensor along with a 12MP ultra wide angle camera while the inner main display has a single 10MP selfie camera. You can also check out our more in-depth feature on the Galaxy Z Flip 4 here. Prices start from US$999 and up. 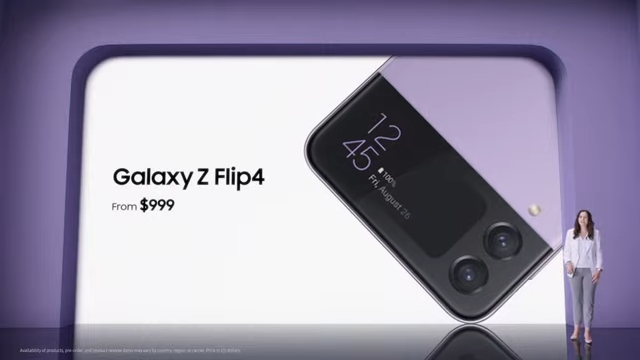 What is the Samsung Galaxy Buds2 Pro

The latest generation Samsung Galaxy Buds2 Pro wireless earbuds retain the same squarish charging case design as the Buds Pro but feature enhanced performance with Hi-Fi 24 bit Audio support, the use of a new Samsung seamless codec (SSC HiFI) for clearer, richer music without streaming issues and an improved ergonomic design that is 15% smaller than its predecessor while integrating a new coaxial 2-way speaker. It also has enhanced active noise cancellation support and can be acquired in Bora Purple, Graphite and White. 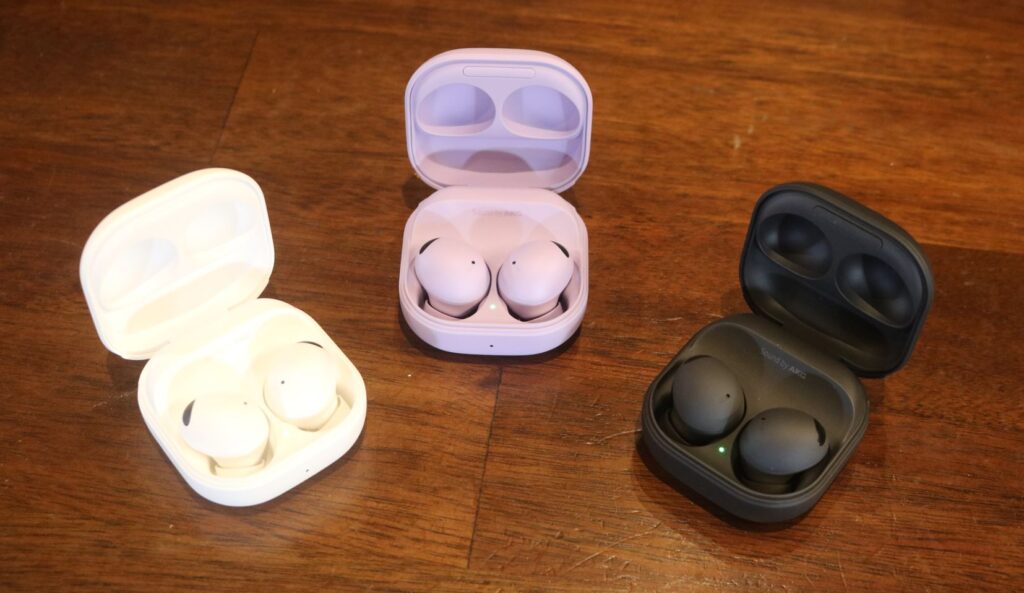 What is the Samsung Galaxy Watch5 and Watch5 Pro

The latest additions to their smartwatch line-up, the Samsung Galaxy Watch5 and Watch5 Pro have an added emphasis on wellness and health tracking. This time around, the Galaxy Watch 5 series slap on Sapphire Crystal displays that offer a 60% harder outer layer to remain relatively scratch free with the Galaxy Watch5 Pro offering a slightly larger display and battery. The watches also use their tough Armor Aluminium alloys that enhance their durability significantly. 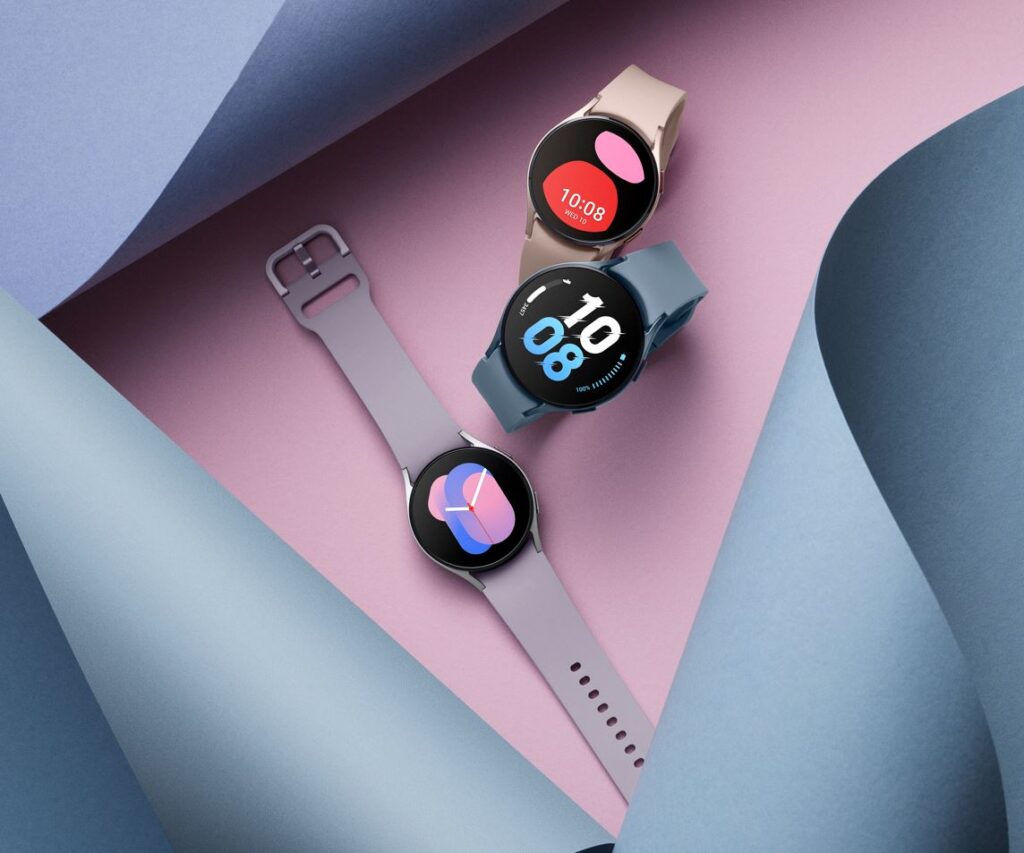 The new smartwatches have the BioActive sensors seen in the Galaxy Watch5 series that combine Optical Heart Rate and Bioelectrical Impedance Analysis to monitor heart rate, blood oxygen levels and even stress levels too with even more accurate health tracking than its predecessor. 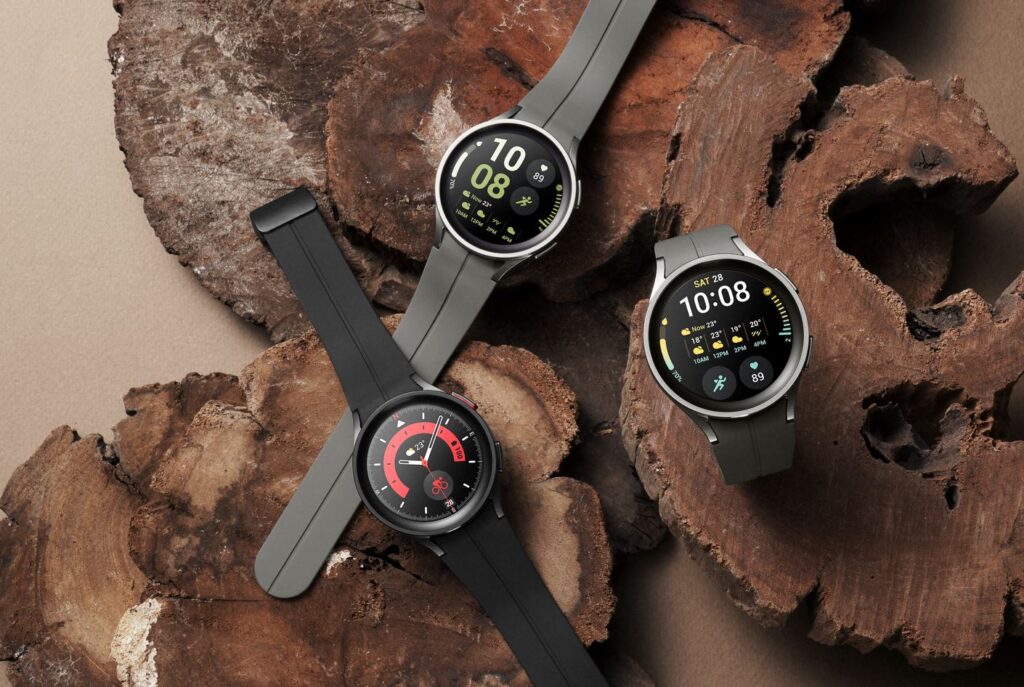 It also actively monitors sleep quality including your snoring or lack thereof as well as bloody oxygen levels to suggest solutions via their Sleep Coaching feature. The watches also have the immensely useful fall detection feature in case you or a family member wearing it takes an impromptu tumble. The watches are also smarter too with SmartThings integration to control connected peripherals like lights, TVs and the like. 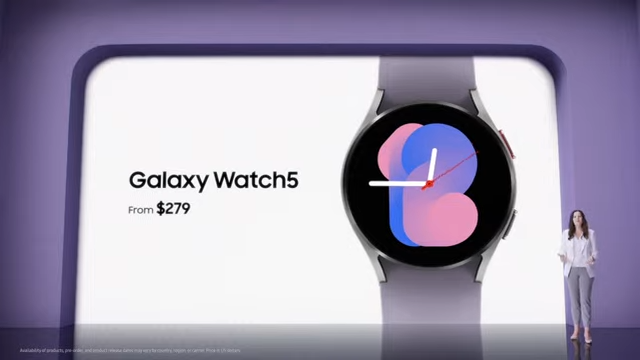 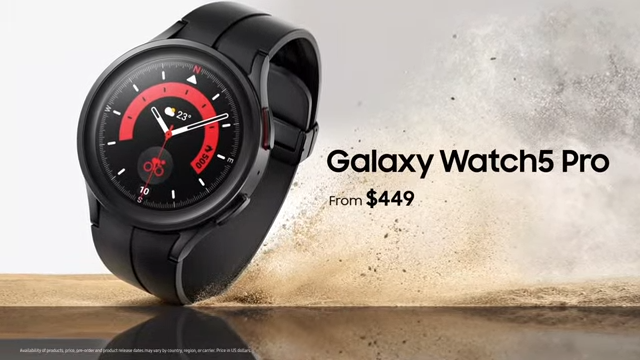 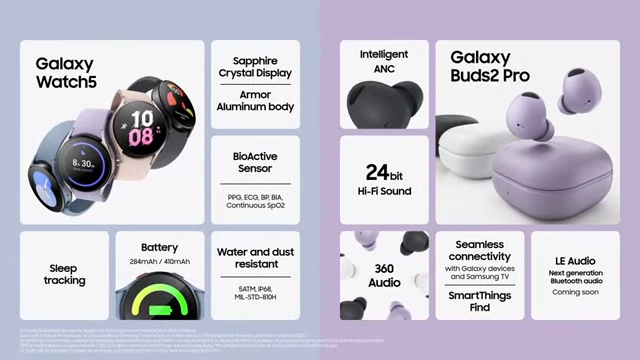 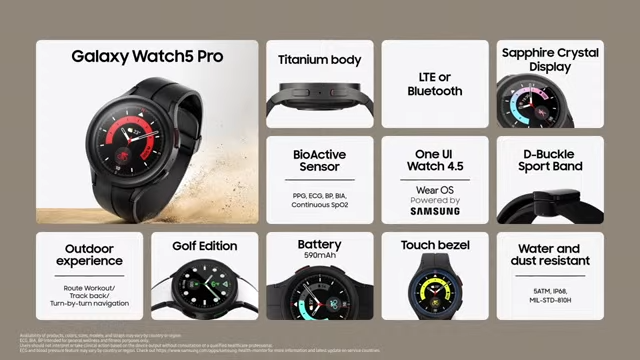