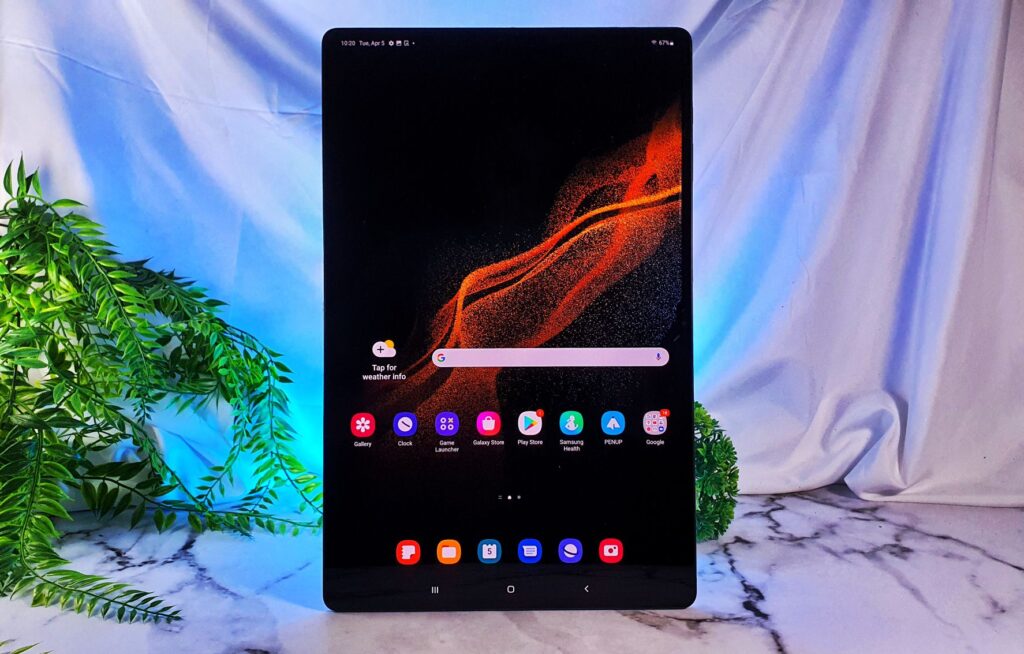 Launched at the same time as the Samsung Galaxy S22 series, the Galaxy Tab S8 series tablets cram in the very best hardware that the brand can issue from their foundries with every technological and engineering trick at their disposal in a bid to create the best Android tablet in the market. 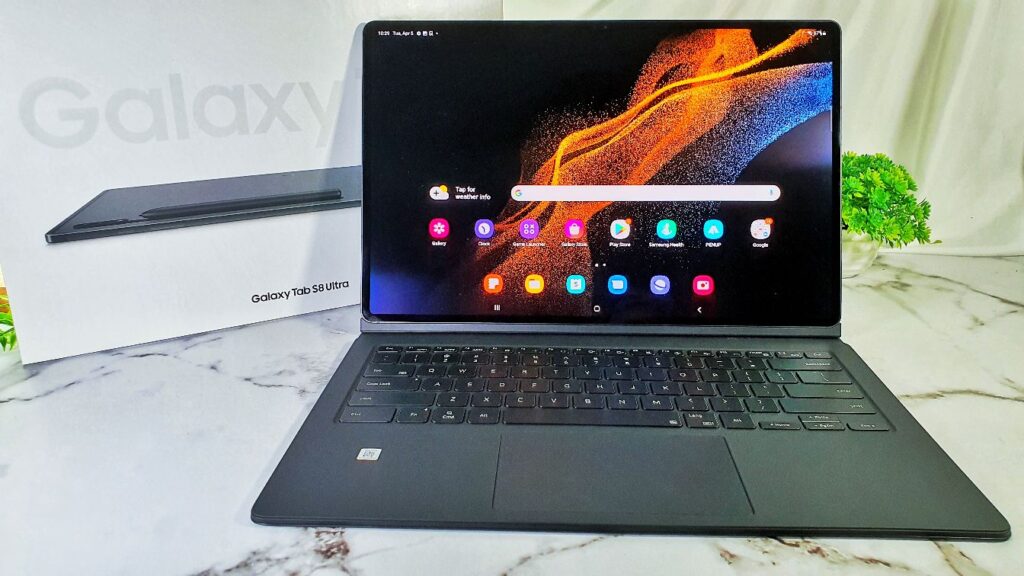 The Galaxy Tab S8 Ultra tablet makes for an imposing sight even in the box as the packaging itself is almost the size of a laptop measuring at over 14-inches diagonal. After popping open two security seals, you get a surprising amount of freebies in the box that go a long way to justifying the cost of the tablet and then some. Our Galaxy Tab S8 Ultra first look sample is a retail unit for the Malaysia market and what comes bundled with the tablet can vary depending on region. 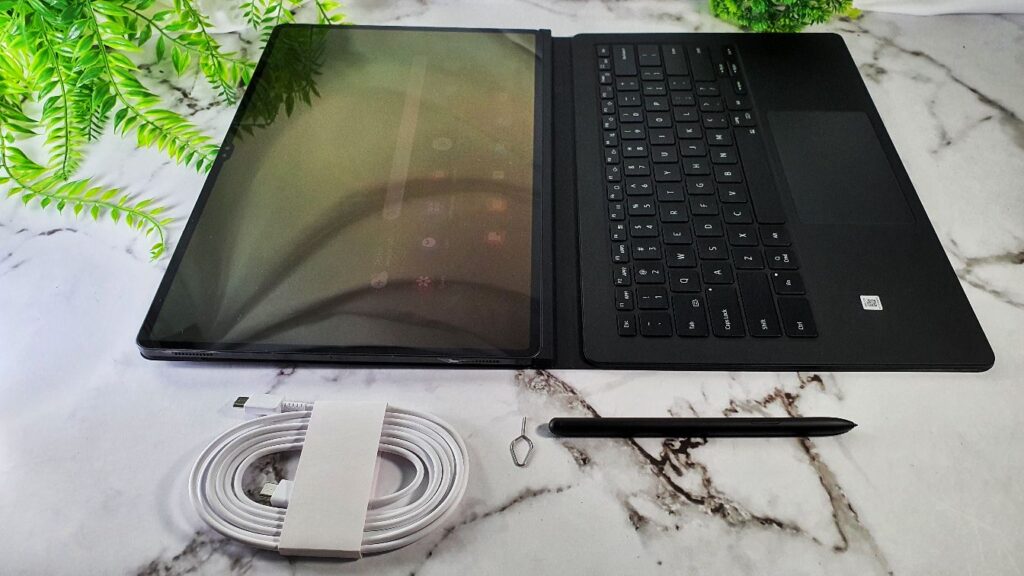 Samsung Galaxy Tab S8 Ultra First Look and Unboxing – Out of the box we get the tablet itself, an S Pen, a USB C cable, a SIM eject pin and a Book Cover keyboard

On top of the Galaxy Tab S8 Ultra tablet that’s wrapped in a protective fabric sleeve, you also get a USB-C charging cable, a SIM eject pin, the usual quick start literature and, most important of all, you get the Book Cover keyboard case bundled in with the slate.

The bundled S Pen stylus has all of the associated refinements in the latest generation of styli much like the one bundled with the Galaxy S22 Ultra save that it’s upscaled to a larger form factor that’s closer to a real pen in size. You get the same blazing fast 2.8ms low latency responsiveness when writing onscreen and full access to Air Commands which allow you to control aspects of the slate by gesturing around with the pen held like a wand. 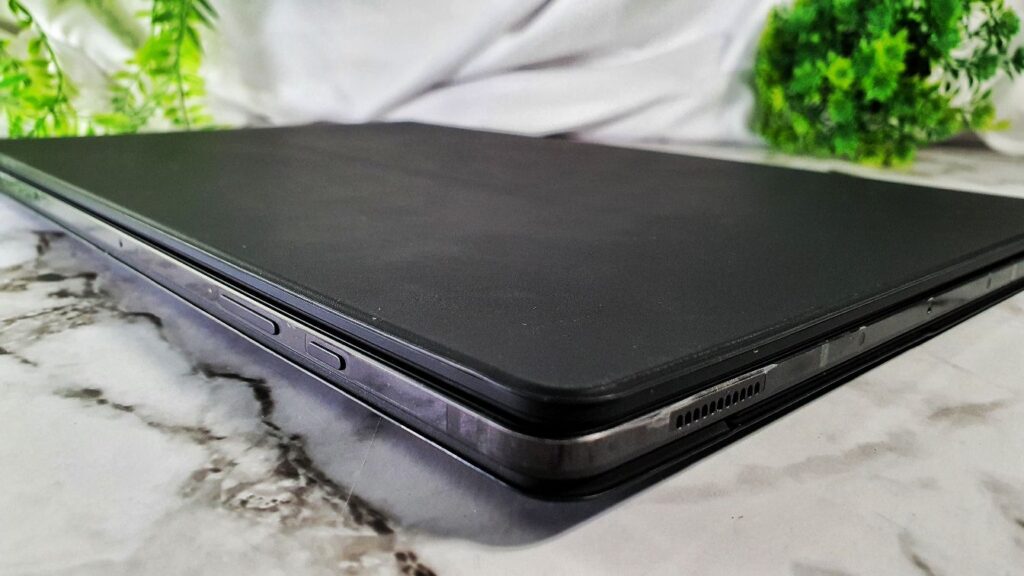 The keyboard portion latches on to the bottom of the tablet via magnets and a set of pogo pins while offering a relatively full set of keys including shortcuts for screen brightness, volume, the DeX desktop mode and a full-sized touchpad to offer a closer experience to that of a laptop. Perhaps the only thing missing here is a full sized numeric keypad but that would be churlish in any case as most ultraportables don’t have that option.

The second half of the cover magnetically latches on to the rear of the tablet and has a raised bulge to accommodate the S Pen stylus when it’s attached to a groove with magnets next to the rear-mounted camera.

In order to prevent it from jostling around, you’ll have to manually flip a flap on the case open to gain access to the S Pen. The bottom half itself has a fold-out kickstand in the manner of a Surface laptop that lets you angle it from nigh vertical all the way to an almost flat perspective. 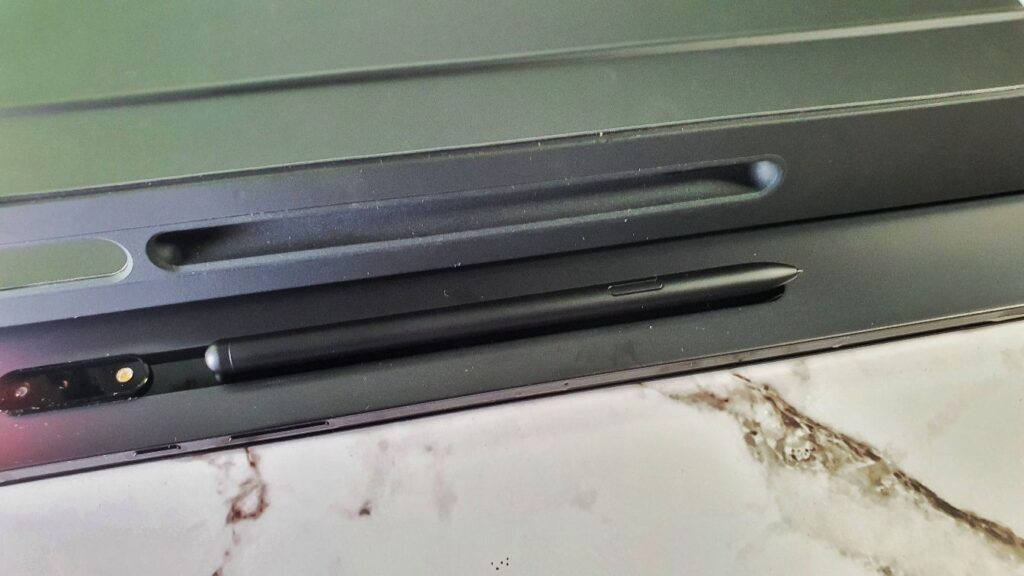 When fully assembled, the keyboard and backplate halves of the case fully protect the Galaxy Tab S8 Ultra from most nicks and minor misadventures. Where the nearest contender from Cupertino will typically have you forking out extra for a stylus and a keyboard, Samsung has magnanimously thrown in the stylus and a protective Book Cover keyboard case which represents impressive value. Perhaps the only quibble here is the lack of a bundled charger but that’s a minor quibble at best.

Slip the Galaxy Tab S8 Ultra out of its protective fabric sleeve and the first thing that immediately draws your eye is its immense 14.6-inch Super AMOLED display. As far as first impressions go, I was gobsmacked at the sheer size and crispness of the tablet’s display when I first fired it up for a binge session of Picard.

The display itself features extremely slim bezels all around, affording it a substantial 90% screen-to-body ratio while a tall 16:10 aspect ratio which makes it ideal for paperwork crunching duties. 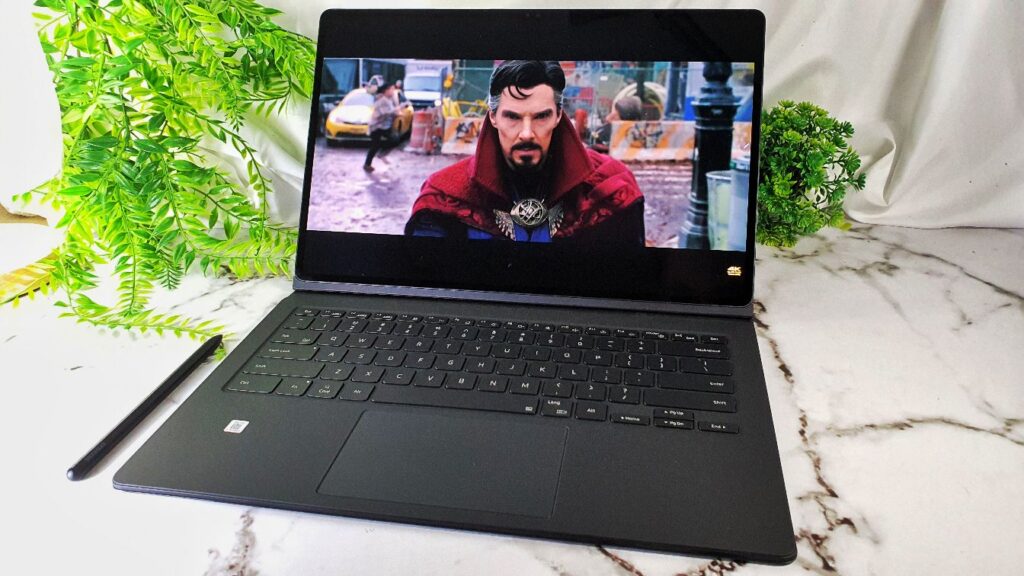 You effectively have one of, if not the largest tablet displays currently in the market and which outsizes even the iPad Pro’s 12.9-inch display by a respectable margin. The right side of the touchscreen also has an under-display fingerprint reader for biometric security. With a crisp 1,848 x 2,960 pixels resolution, the display is also crisp and features HDR10+ too with all the rich colours that Samsung’s Super AMOLED panels are renowned for.

Intended to be used primarily in landscape mode, the tablet has a tiny notch up top on its right side which houses a dual camera array with a 12MP primary and a secondary 12MP ultrawide camera for video calls. In the new normal, video call cameras have become all the more essential which makes Samsung’s emphasis on providing a set of quality front-facing dual cameras a welcome bonus.

Seeing the design of the Galaxy Tab S8 Ultra, the placement of its cameras and its tall 16:10 aspect ratio, it’s primarily intended for use in landscape mode and the inclusion of the Book Keyboard cover encourages that to a significant degree though it’s still usable in a vertical orientation.

Once you’ve gotten over the gorgeous sight of the display, you’ll immediately appreciate Samsung’s engineering prowess that allows them to mash the dimensions of the slate down to an almost impossible 5.5mm thickness – It’s thinner than a fashion magazine – while weighing just 726g for our WiFi only version even with the inclusion of a humongous 11,200mAh battery. 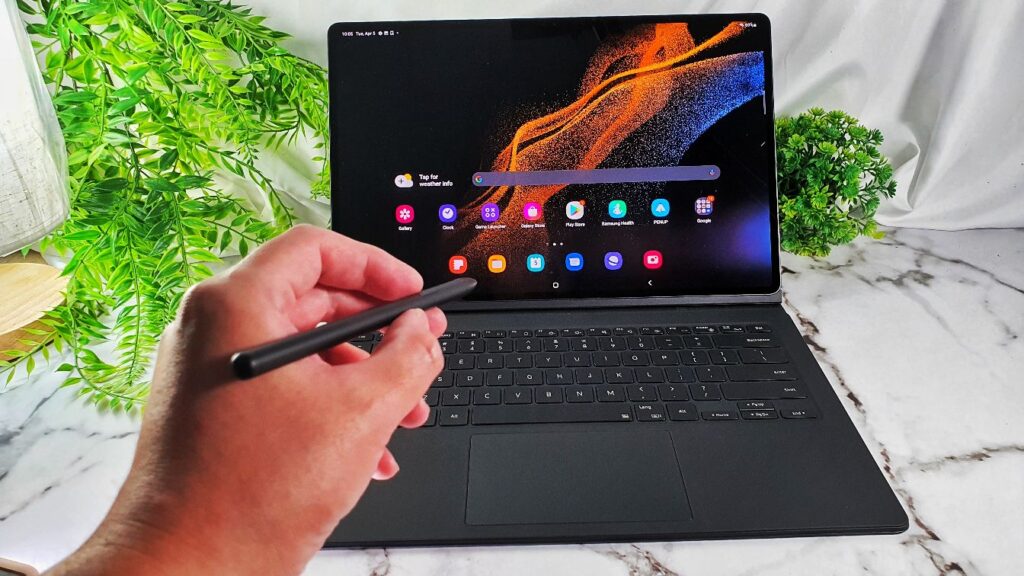 Fortunately, it’s also built tough and uses Samsung’s toughest, lightest and thinnest material for tablets yet – their own Armor Aluminium that first saw service on the Galaxy Z Fold3 and which is also used in the Galaxy S22 series.

Assuming you orient the tablet in landscape mode, you get a power button and volume rocker along with a SIM card port with access to a microSD card tray on the top side. Both its left and right sides feature a pair of speakers to form a quad speaker array tuned by AKG. The right side however has the addition of a USB-C port for charging duties.

The base of the tablet features a set of pogo pins to interact with the Book Cover keyboard case and latches on securely when placed in close proximity to the tablet. While the magnets for both halves of the Book Cover case stick on in a solid fashion, it’s not intended to hold the weight of the tablet on its own so you’ll still have to cradle it carefully, as you should for something this sophisticated and pricey. 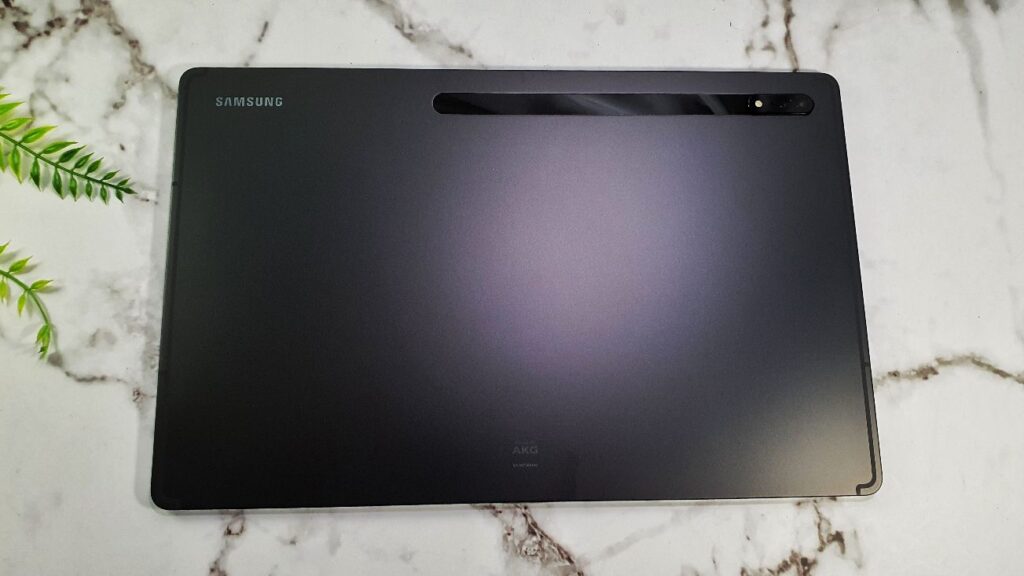 The backplate is otherwise bare save for a stylised strip on the rear that hosts a dual camera array with a 13MP primary and 6MP ultrawide angle that can take up to 4K video. A magnetic strip next to the camera acts as a storage and charging dock for the provided S Pen stylus when not in use.

You get the latest Snapdragon 8 Gen 1 processor running under the hood, 12GB RAM and 256GB of expandable storage via a microSD card slot. In case that flew by a bit too fast, the Galaxy Tab S8 Ultra has a slot for a microSD card slot that allows you to augment the memory with a card up to 1TB in size while the same can’t be said for some competing tablets which also cost more to boot.

In terms of connectivity, our Galaxy Tab S8 Ultra review sample is a WiFi only version with fast WiFi 6E 802.11ax connectivity, Bluetooth 5.2 and the aforementioned USB-C port for charging and docking peripherals. Keeping it powered is a massive 11,200mAh battery that also has 45W fast wired charging and 15W reverse charging for other devices. 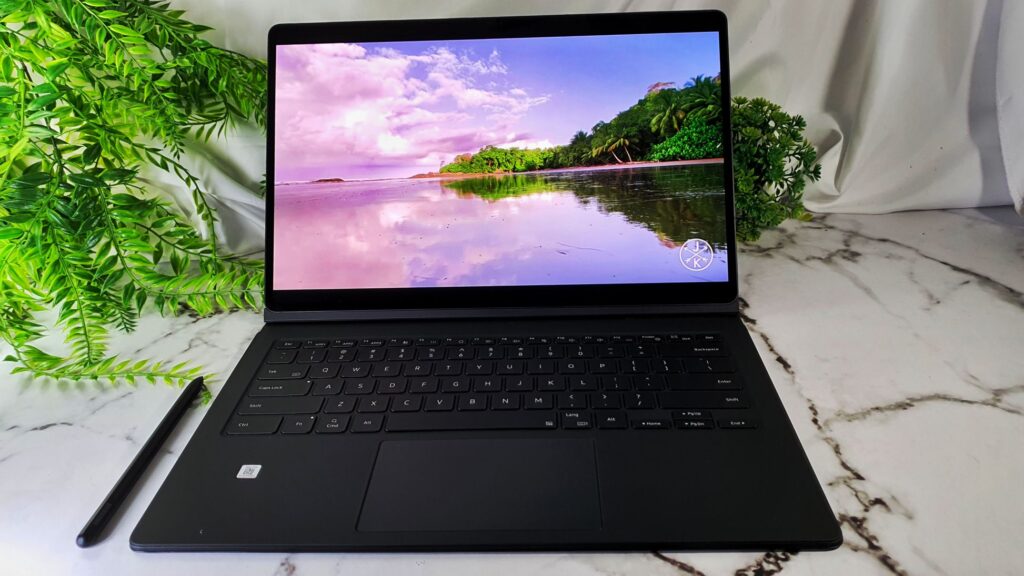 I fired it up and setting it up was quick and breezy. The provision of a touchpad, a keyboard and a full-fledged S Pen offers multiple creative options especially for content creators and an initial whirl around the block in both standard tablet and DeX mode for work and gaming proved that the tablet is immensely capable indeed. Stay tuned for our indepth review where we put it through its paces!