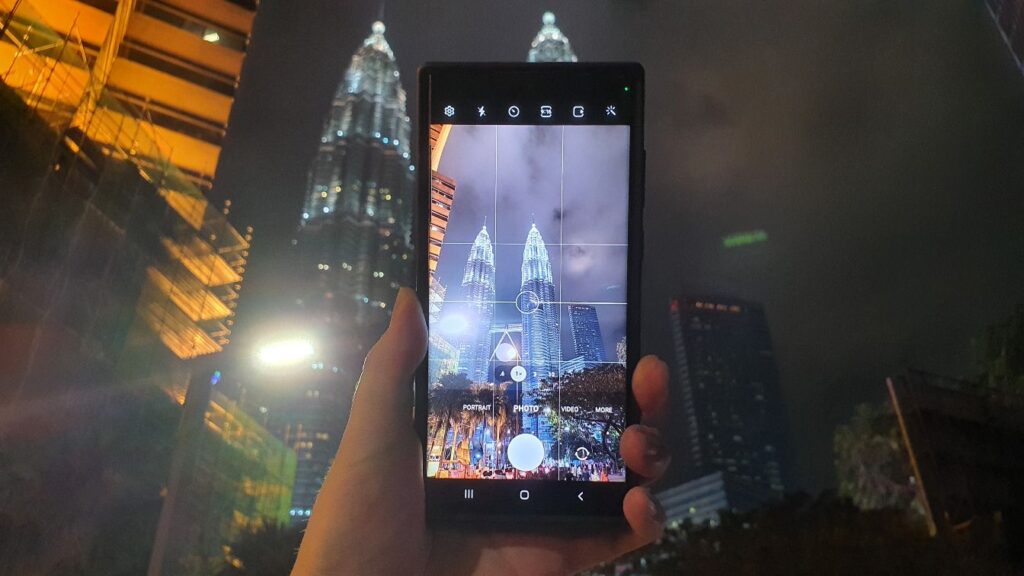 It’s quite true that if you’re native to a locale, it’s pretty much unlikely that you’ll be visiting any of the local tourist attractions. While I’m familiar with the touristy spots in Kuala Lumpur like the majestic twin towers of KLCC, the picturesque Saloma bridge, the rustic charms of Kwai Chai Hong in Petaling street and the like, they’re very rarely on my roadmap of places to visit seeing as they’re literally just around the proverbial corner and typically more pressing matters like work await. 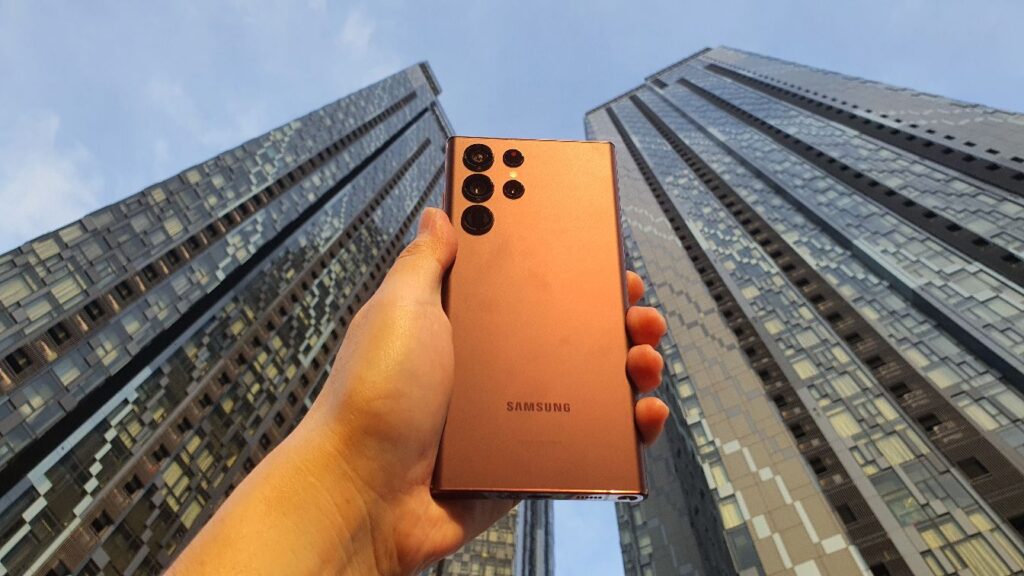 Samsung aimed to address that missing aspect of my experience and was keen for me along with a bunch of other guests including the stellar Adam Lobo to really put our Samsung Galaxy S22 series phones and in particular the Samsung Galaxy S22 Ultra and its Nightography low light photography and videography capabilities to the ultimate test – playing tourist!

And what better way to play a tourist than in Malaysia itself with its veritable smorgasbord of scenic locales in Kuala Lumpur that offer a truly different view after dusk as well as in broad daylight. The bespoke programme to the theme of #makenightsepic kicked off at dusk with perhaps the most intimate and scenic view of Kuala Lumpur at the Castra@Colony glamping spot set on top of a building with a view of  the nearby Public Bank tower and the peaks of KLCC’s twin tower peeking over the skyline. 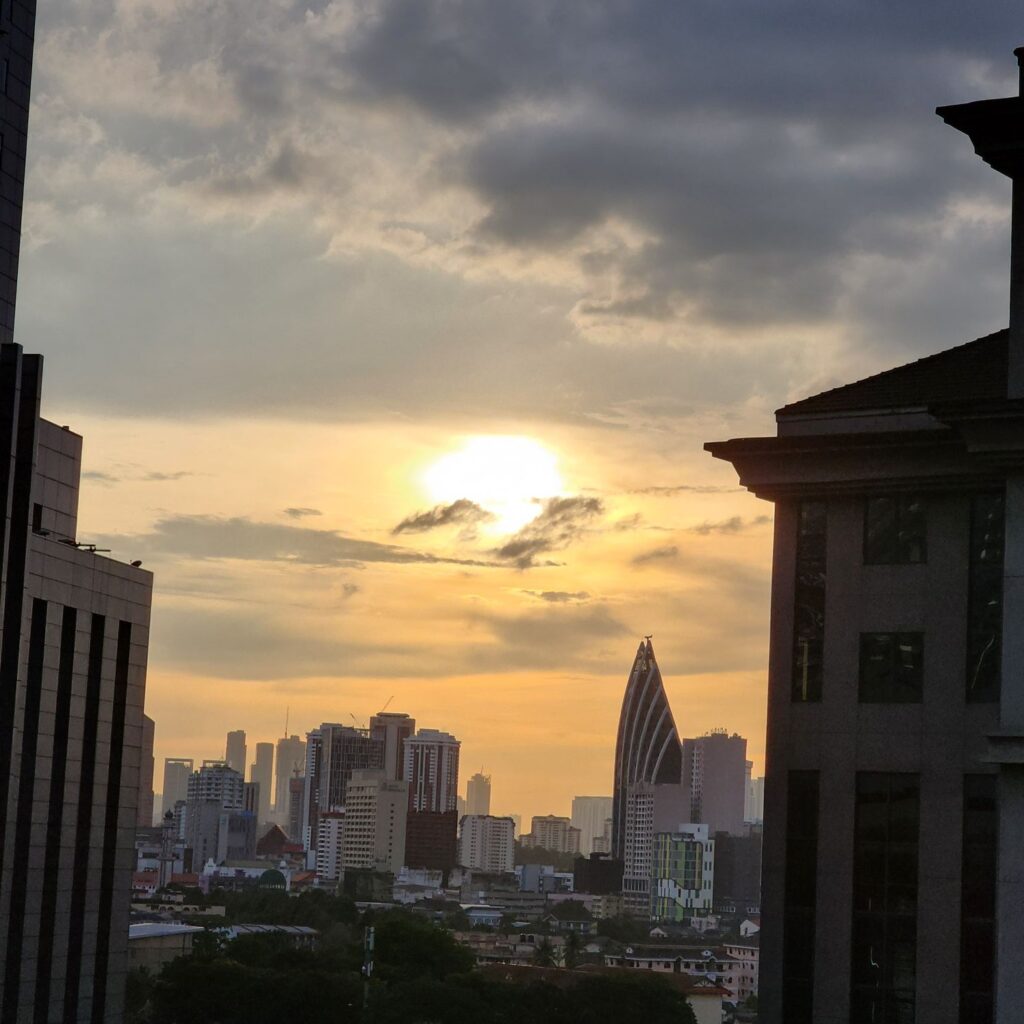 That picturesque view was only the beginning though and after a decadent repast of freshly grilled shrimp, garden greens, dainty morsels of bruschetta and a rocking though alas booze free faux mojito, we were ushered along with the setting sun to one of the ubiquitous Hop On and Hop Off tour buses that perpetually circuit around Kuala Lumpur’s major tourist attractions to really put the Galaxy S22 series, and in particular the Samsung Galaxy S22 Ultra cameras to the test with a host of challenging low light scenarios that would typically require a full-frame or mirrorless camera and a significantly higher amount of skill to yield decent shots. 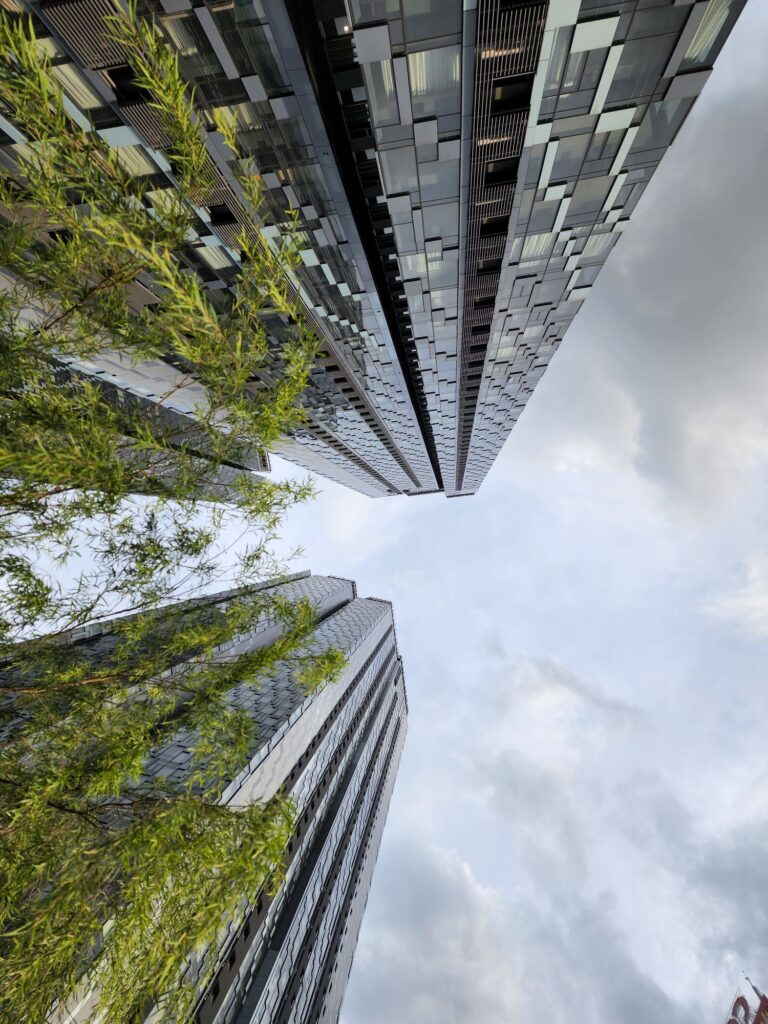 Samsung Galaxy S22 Ultra cameras and Nightography put to the test…as a tourist!

The first stop was at KLCC, or rather, specific spots around it that offer a full view of the twin towers unobscured by the cluttered skyline.  In auto mode, the Galaxy S22 Ultra camera array built around a huge 108MP F/1.8 camera with OIS, PDAF and laser autofocus yielded excellent Insta-worthy and very printable shots indeed. 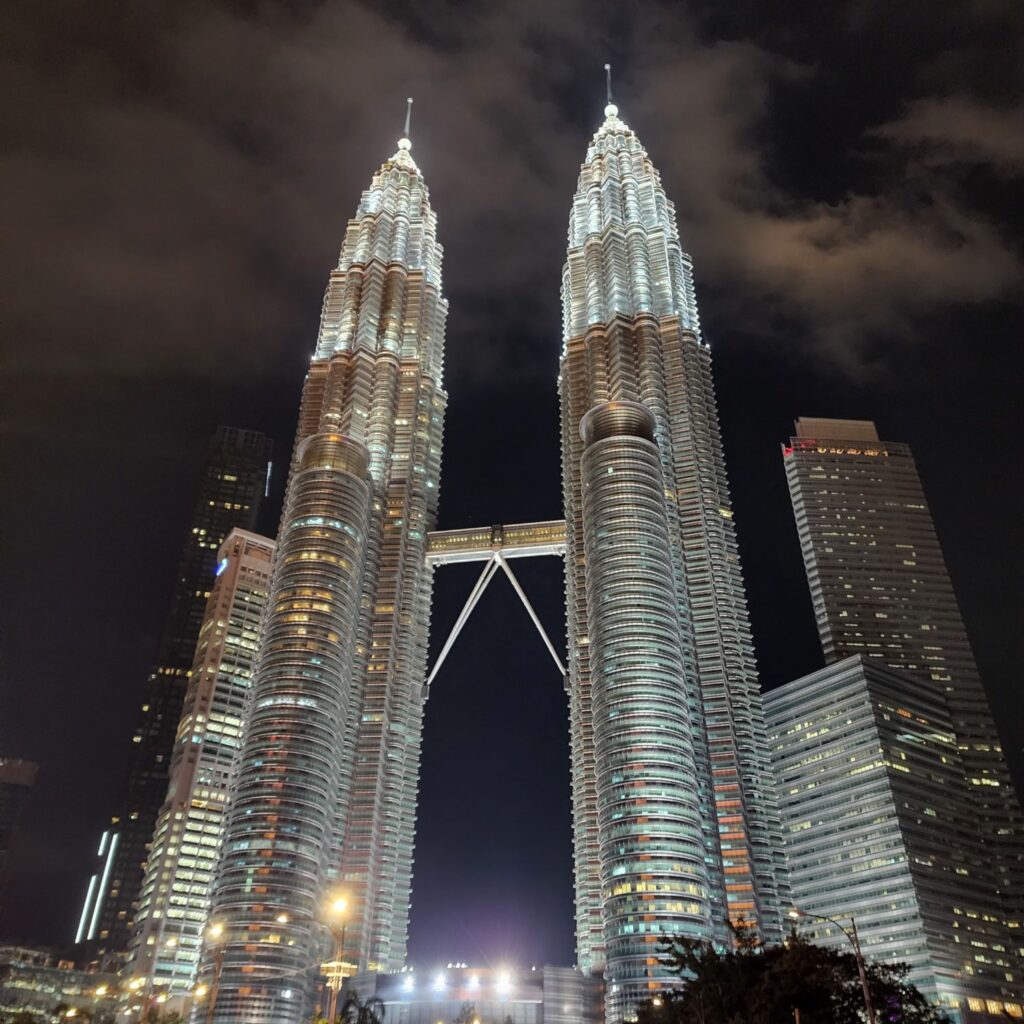 What was especially impressive was the fact that its hybrid 100x Space Zoom was still able to capture good shots off the cuff of the KL Tower that were captured even while being jostled around in a bouncing bus  in dim light conditions. 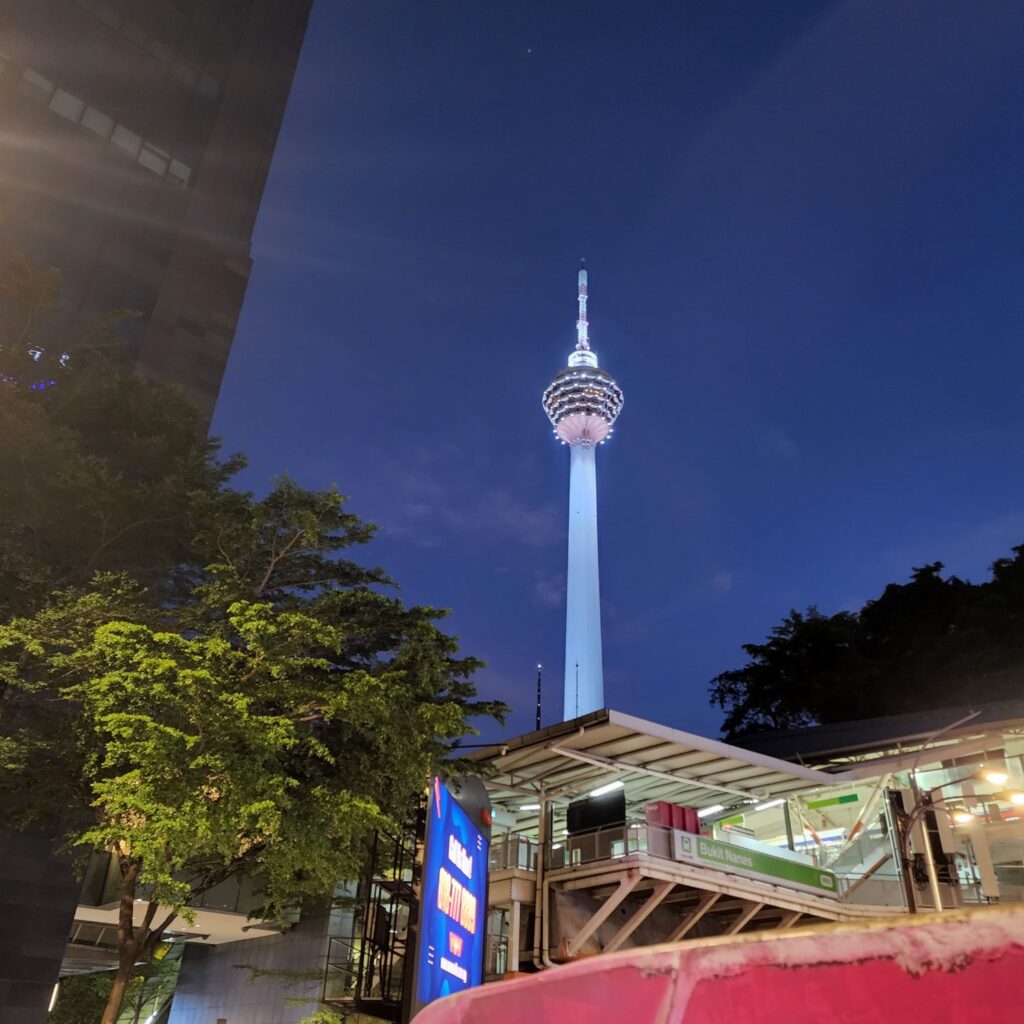 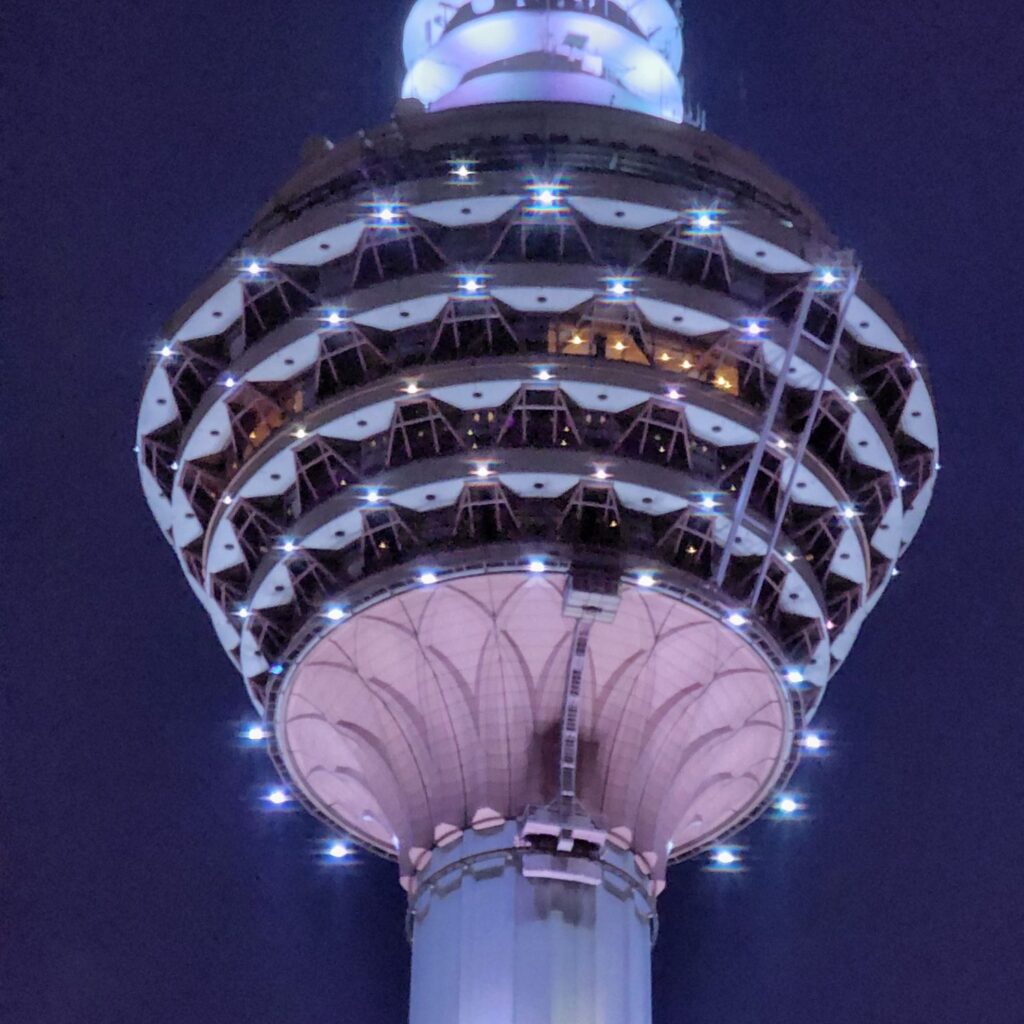 Next up was the famous Saloma bridge which was an interesting scenario that put the Galaxy S22 Ultra’s ultra wide mode to the test in order to capture the wide expanse of the bridge and its vaulted, neon-hued exterior. What was especially pleasing with the Galaxy S22 Ultra here is the consistency of colours in shots that were exactly what we saw with my own eyes; something which typically can’t be said of less discerning smartphones though you have the option to Remaster the photo using AI with the built in Gallery app to tune up the vibrancy a bit for posting to social media if your tastes differ. 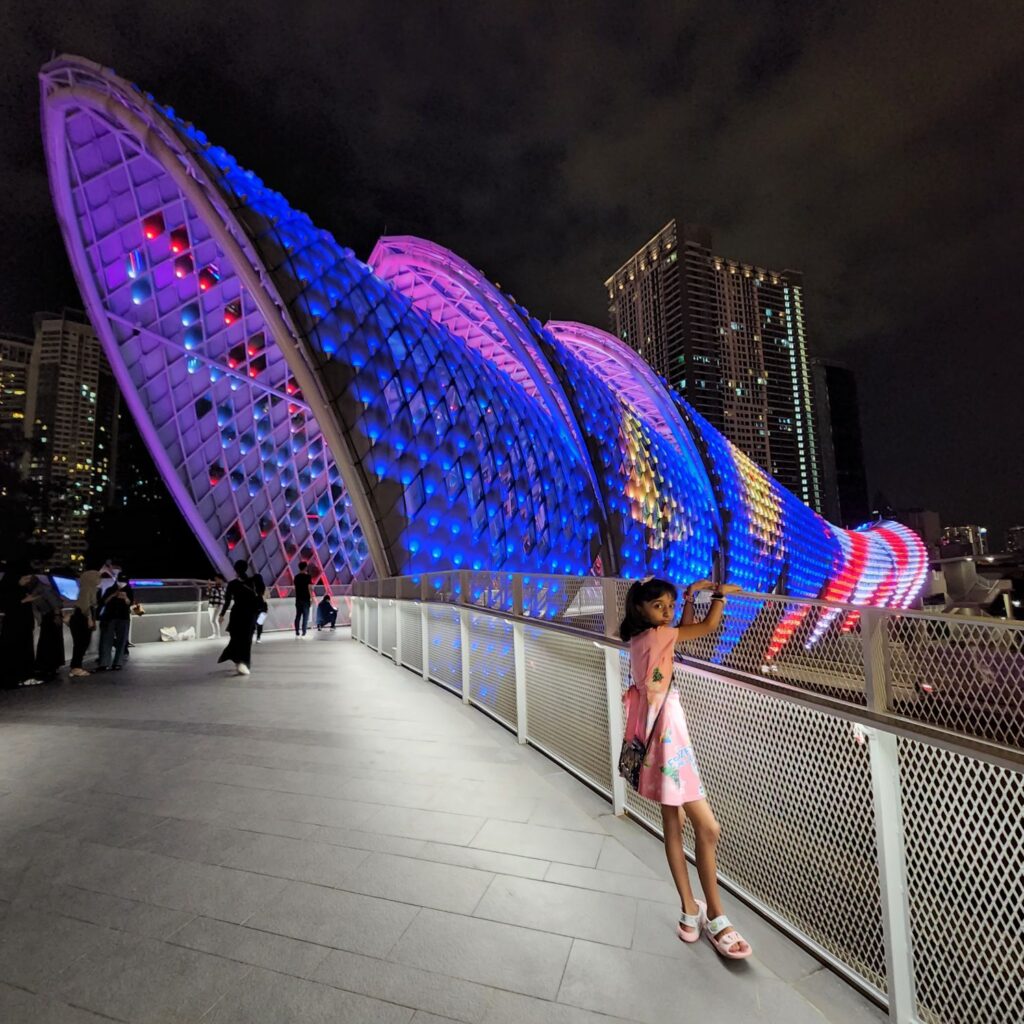 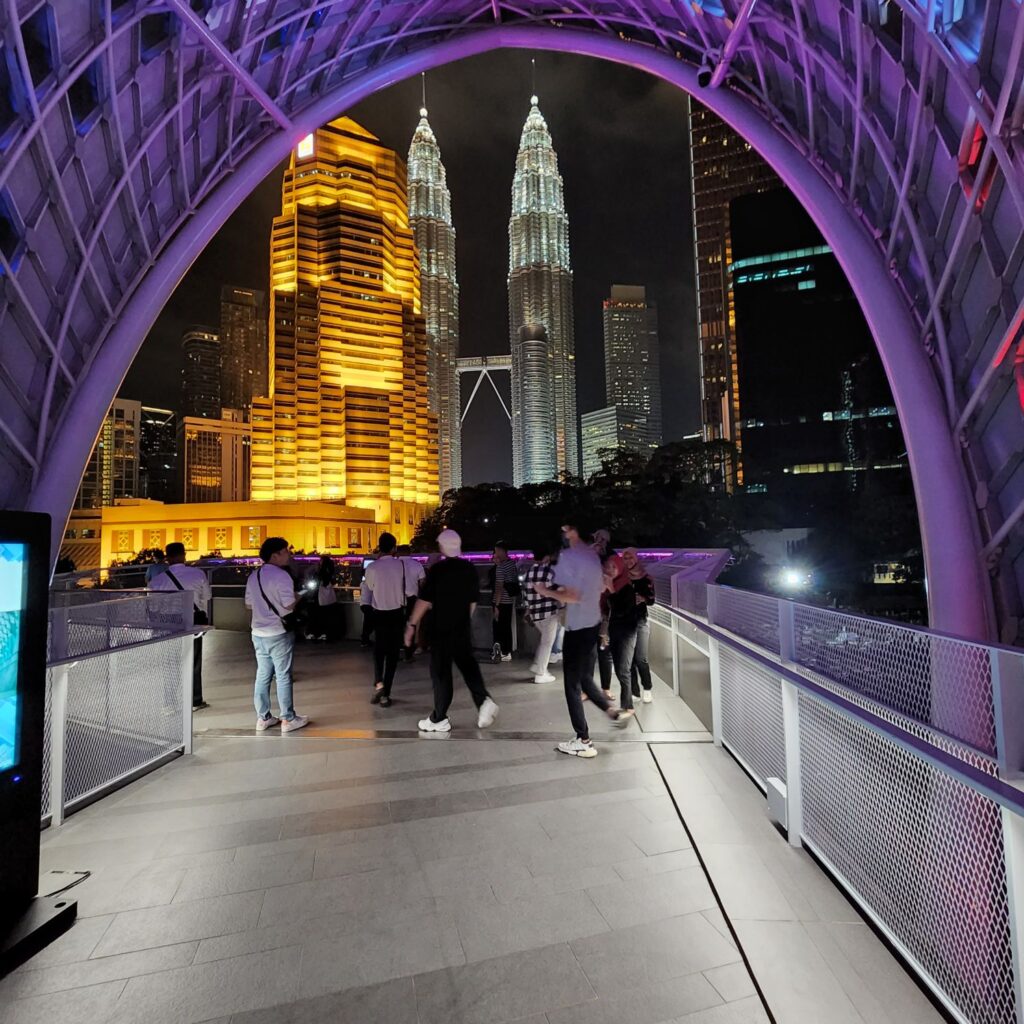 Next up was Kwai Chai Hong which was an interesting tourist locale replete with a host of rich murals and quaint, almost Hong Kong-esque facades of neon signage and Technicolour lanterns gaily swinging in the faint evening breeze. Even in the dim light conditions between pools of light from the neon lanterns and street signage, the Galaxy S22 Ultra cameras were able to yield oodles of detail and salvage dynamic range that would typically make a cheaper phone weep tears of despair. 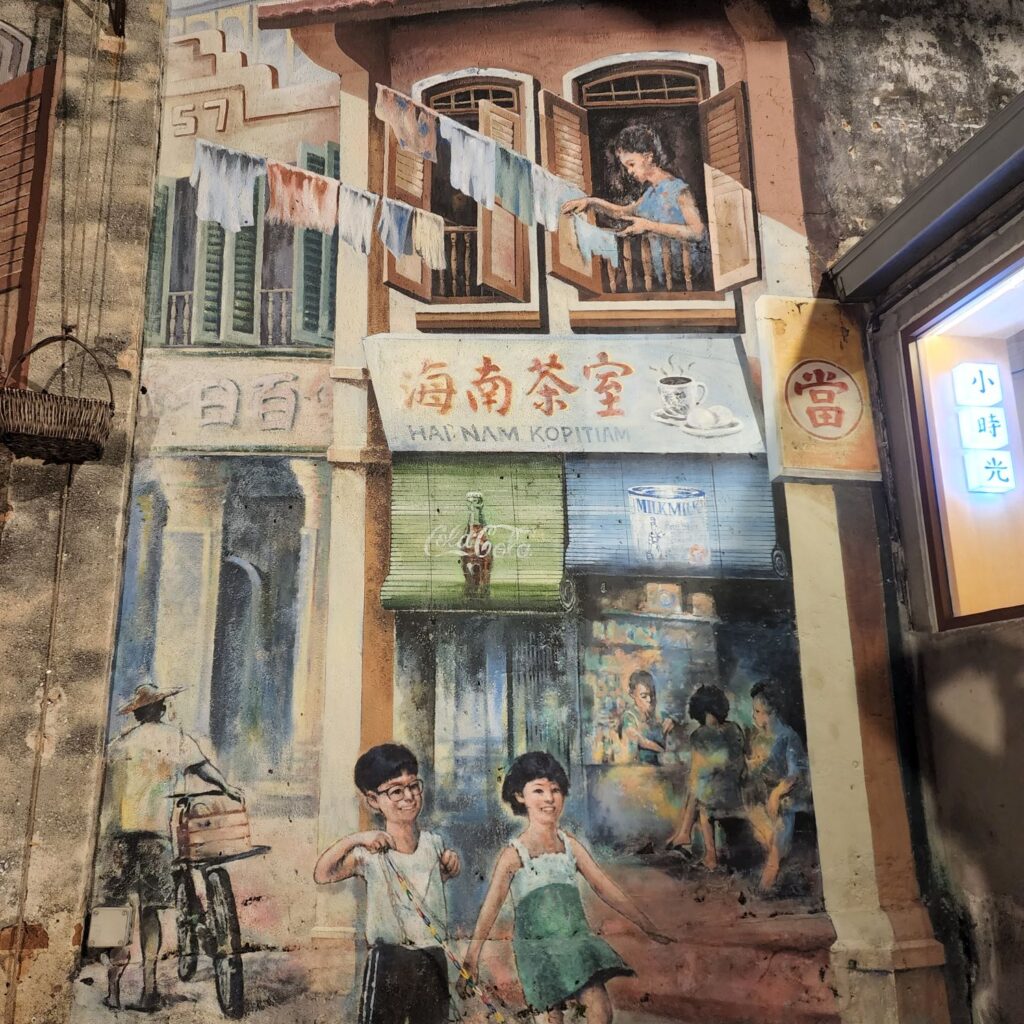 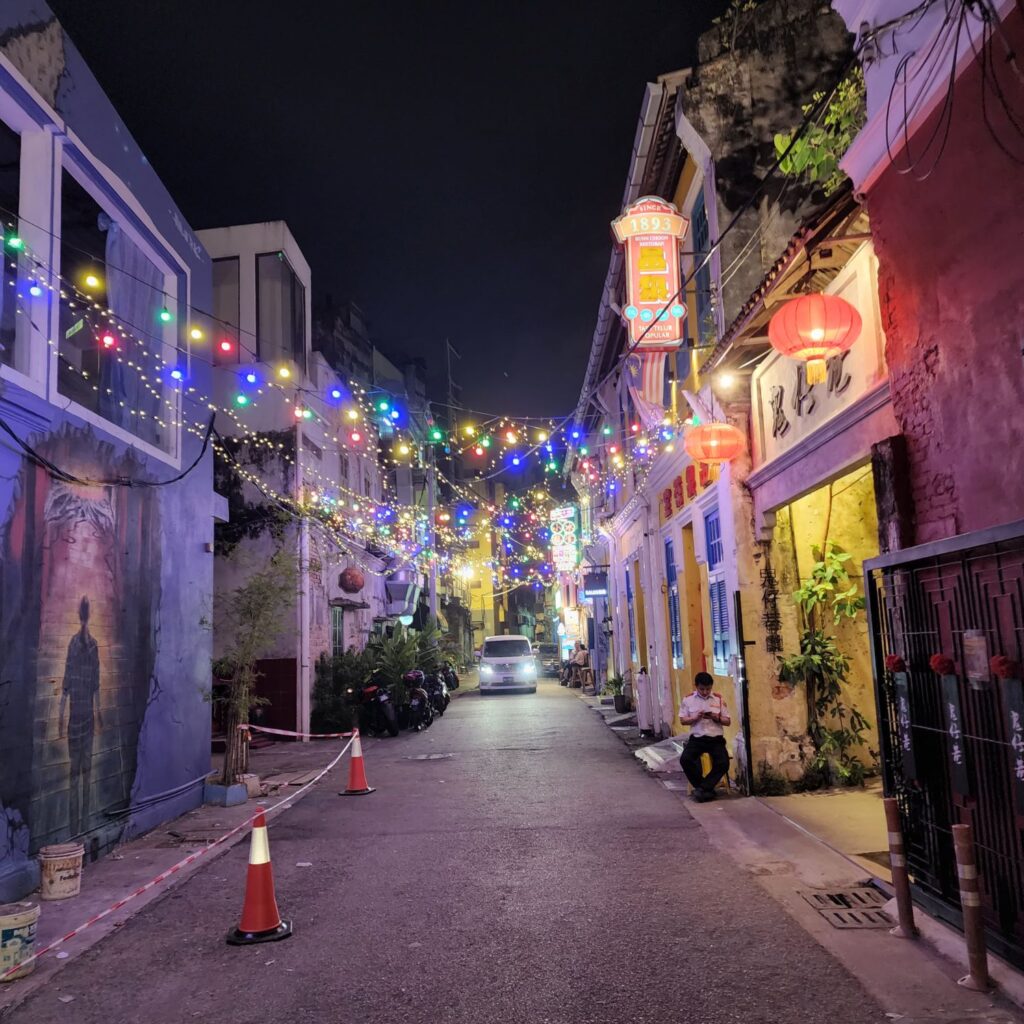 Samsung Galaxy S22 Ultra cameras tested at Kwai Chai Hong that were eerily quiet and bereft of tourists for a few brief seconds save for a guard in the corner. 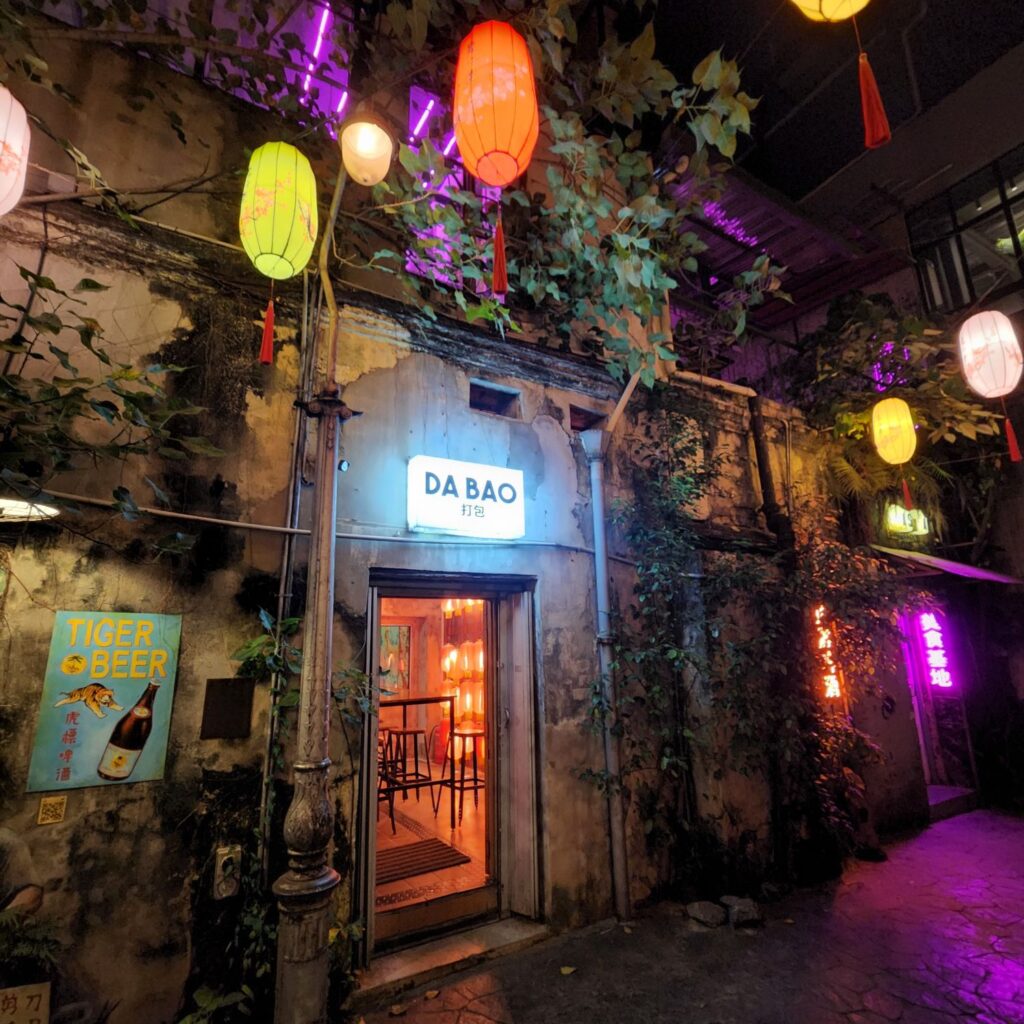 To wrap up the night, Samsung took us to the premier tourist spot in the entirety of the city – Merdeka Square. After dusk, it’s an interesting photographic challenge with glaring bright spotlights interspersed with pools of neon light and dimly lit areas shrouded in shadow all about the field which makes for an interesting testing ground that combines aspects of all the prior locations. 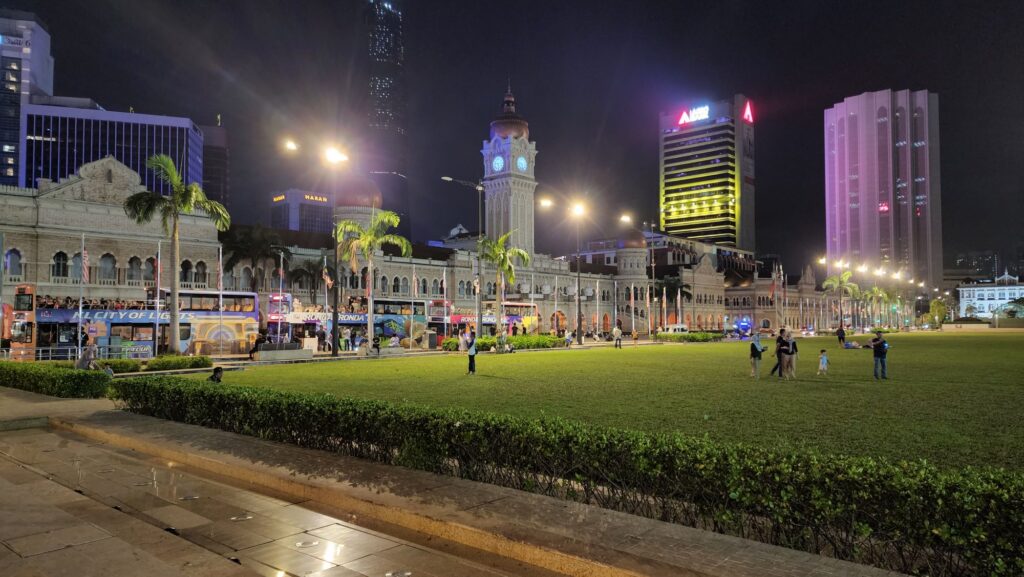 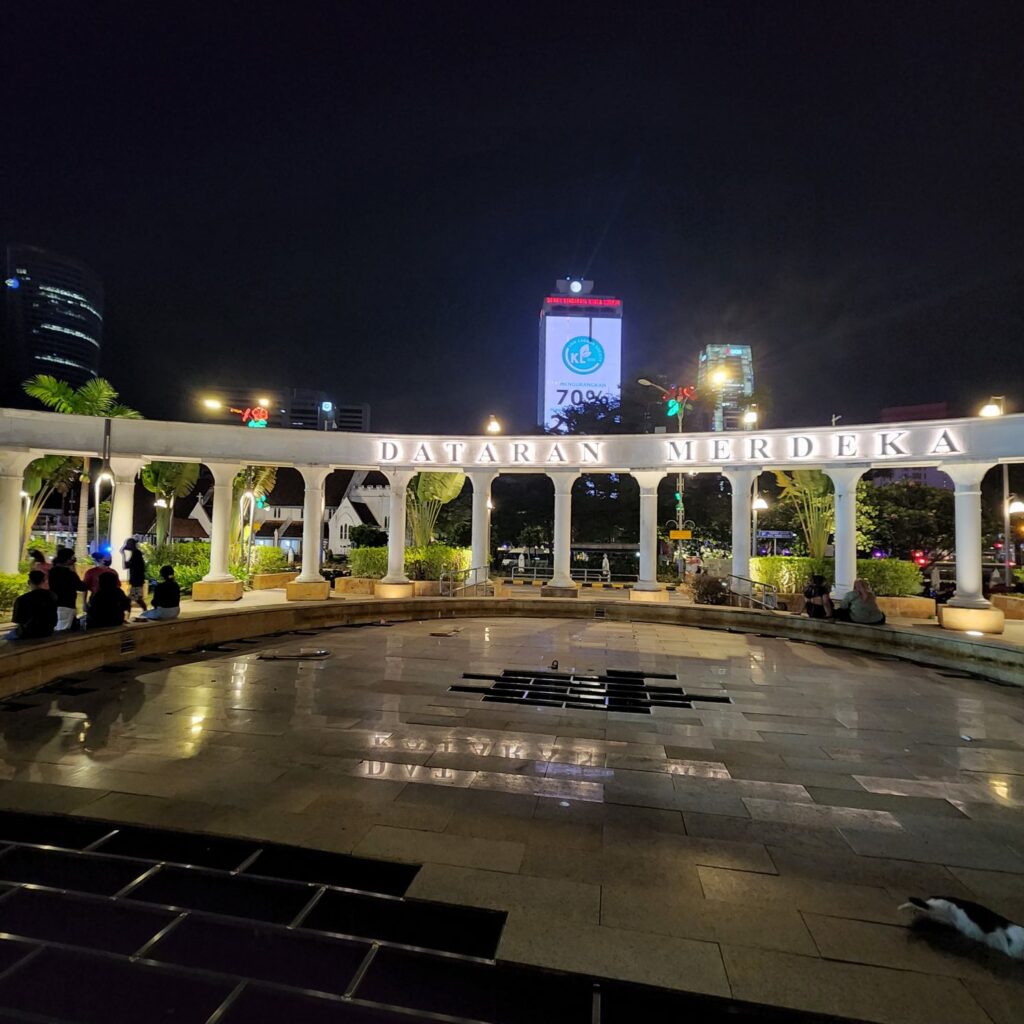 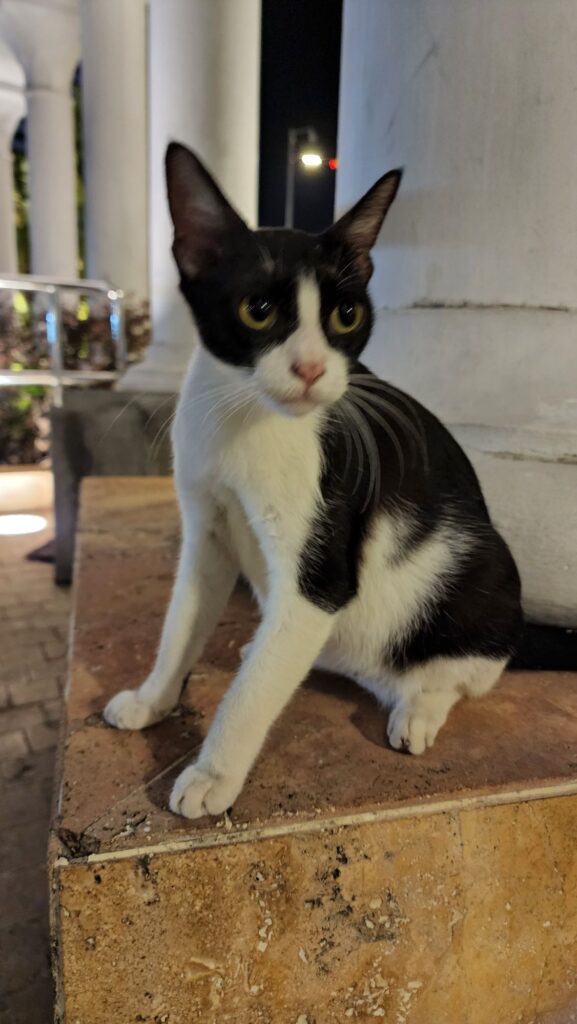 Fortunately, the Galaxy S22 Ultra’s cameras performed like a champ and was able to zoom in to catch the clock tower from over several dozen metres away across the street and were even able to capture the darting movements of an incredibly friendly street cat.

If you’re on holiday, you definitely have more important things to worry about than fiddling about with camera settings and bringing a huge camera light with you which makes investing in the Galaxy S22 Ultra a surprisingly sensible choice in lieu of toting about a huge camera and its accompanying lenses on that next trip to Majorca.

After putting the Galaxy S22 Ultra cameras and its Nightography capabilities in the low light equivalent of an ironman triathlon, it managed to perform like a champ. What makes it particularly impressive is that it was still able to yield great shots and even tactfully suggest how to take better ones too with a helpful ‘best shot’ pointer in the viewfinder without having to tinker with ISO, aperture settings and whatnot. 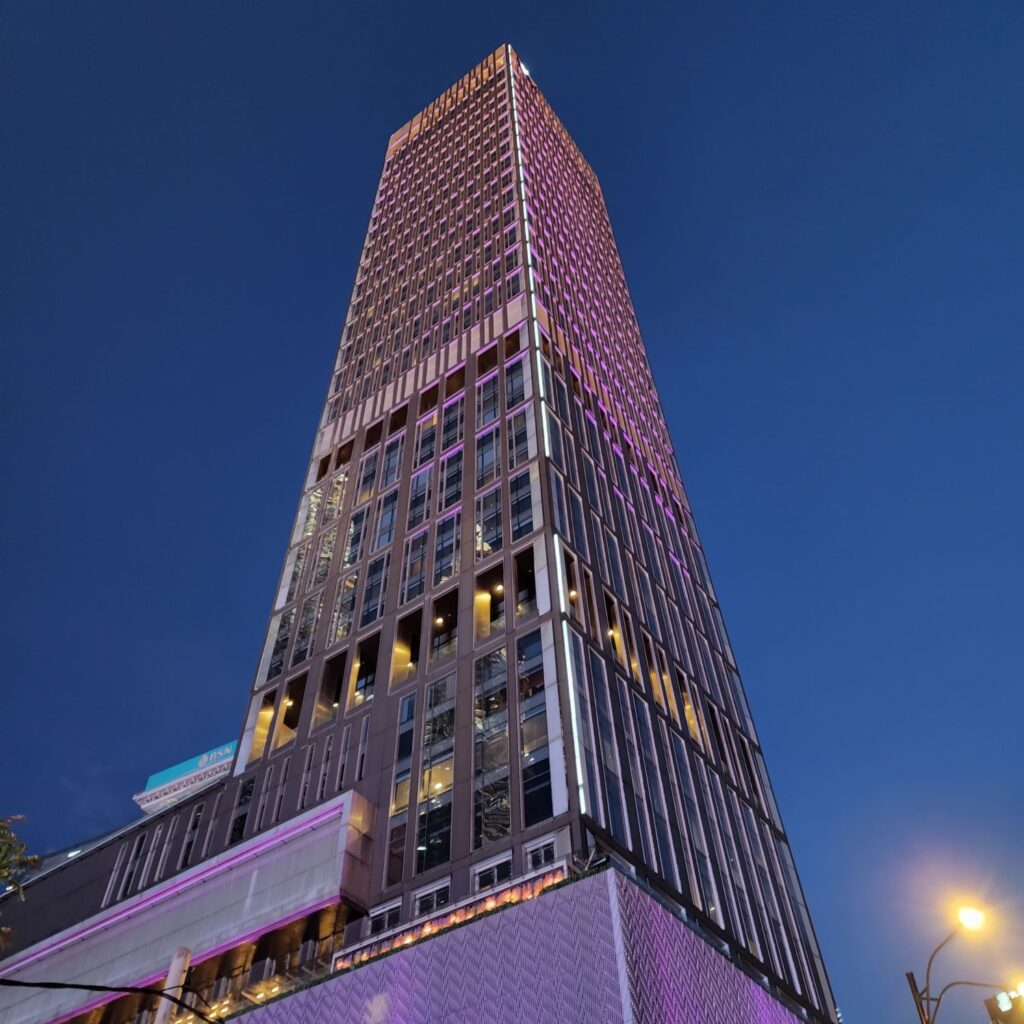 If you’re going on your next holiday, it may be a great idea to ditch that huge camera and just tote this baby along instead, preferably with a protective casing. In my prior experience, you’ll likely appreciate the robust and ergonomic effectiveness of Samsung’s own Galaxy Cover with Strap case that protects the phone and makes it easier to wield in a portrait position which incidentally also makes it fantastic if you’re a TikToker.

8 Reasons Why the Galaxy S22 Ultra is a Game-Changing Smartphone
https://www.hitechcentury.com/why-the-samsung-galaxy-s22-ultra-smartphone/

Here’s why the Samsung Galaxy S22 Ultra is amazing for gaming
https://www.hitechcentury.com/samsung-galaxy-s22-ultra-gaming/