Samsung’s grand Unpacked 2019 event revealed the new Galaxy S10 series of phones as the main centerpiece and they offer a host of next generation enhancements that aim to redefine what a smartphone is.

On top of the usual enhancements – better battery life, enhanced cameras and a more powerful processor along with AI enhancements, Samsung unveiled several particularly interesting features common across the new Galaxy S10 range – Infinity O punch-hole displays, wireless reverse charging capabilities and under-glass Ultrasonic fingerprint readers, all of which serve to make the new S10 series phones which consist of the Galaxy S10+, Galaxy S10 and Galaxy S10e look slimmer, sleeker and sexier on top of being powerful to boot.

The new generation of Galaxy series phones now have larger Infinity-O Dynamic AMOLED displays with a tiny round cutout for the selfie cameras up front to offer more screen real estate and a 19:9 aspect ratio. These new Dynamic AMOLED panels are a step above the previous generation with dynamic tone mapping support via HDR10+ that makes watching movies on it a treat along with some of the most accurate colour rendition yet seen on a smartphone as certified by Display Mate.

Another novel feature is that the range will feature wireless reverse charging, Dubbed by Samsung as Wireless Powershare. The feature allows you to place devices with Qi wireless charging together much like their new Galaxy Buds or another compatible phone in order to charge them straight off your Galaxy S10 phone which comes in handy in a pinch.

One particular upgrade of note in the new Galaxy S10 series is that the range will have their under-glass Ultrasonic Fingerprint Scanner which has lead to the Galaxy S10 series ditching a dedicated fingerprint reader in the design, even when viewing leaked renders. This time around, you plonk your digits on the lower part of the front touchscreen to unlock the phone. The exception to this is the S10e which has a somewhat more conventional side mounted fingerprint reader. The S10’s Ultrasonic Fingerprint Scanner also reads your thumb in 3D rather than a flat 2D image to prevent spoofing too. 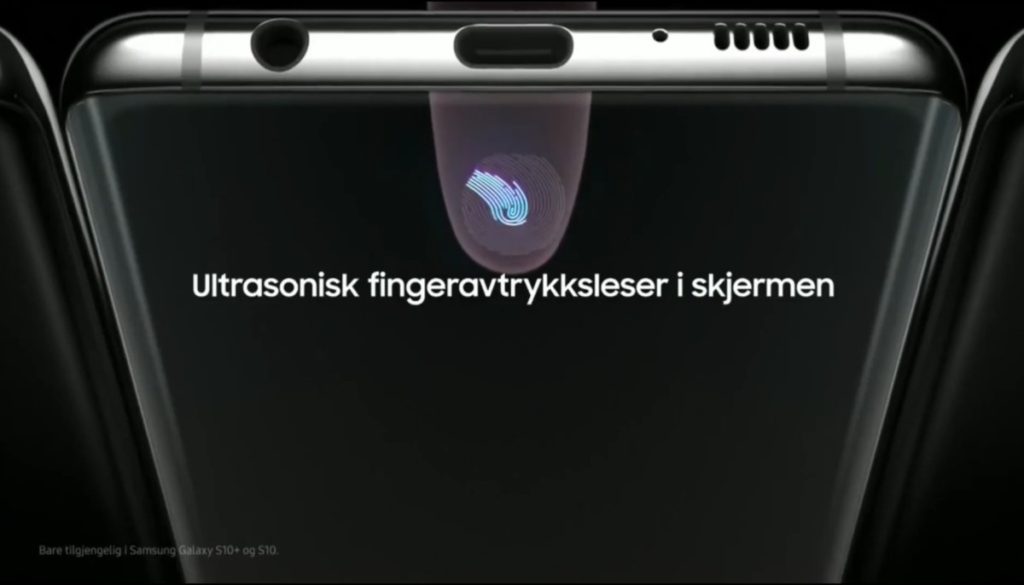 The rear cameras of the S10 series have enjoyed upgrades as well. The Galaxy S10 series now have an ultra wide lens camera with a 123-degree angle of view akin to the human eye so everything you see appears in-frame for panoramic shots, the ability to record in luscious HDR10+ and AI-enhanced photography with the built-in Neural Processing Unit (NPU) intelligently selecting the right settings and suggesting composition tips for better shots. That’s just touching the surface though of what the new Galaxy S10 series has to offer. 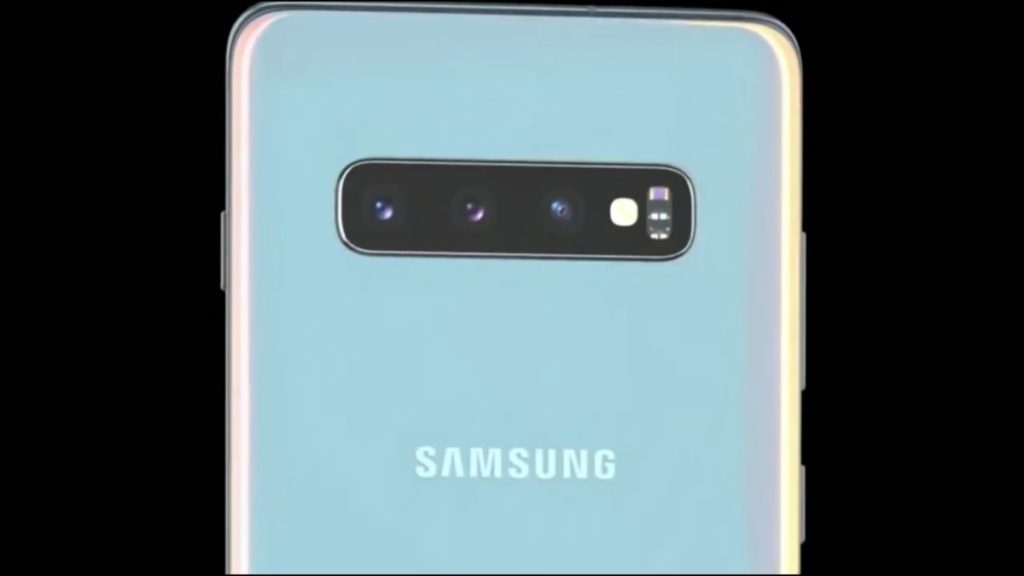 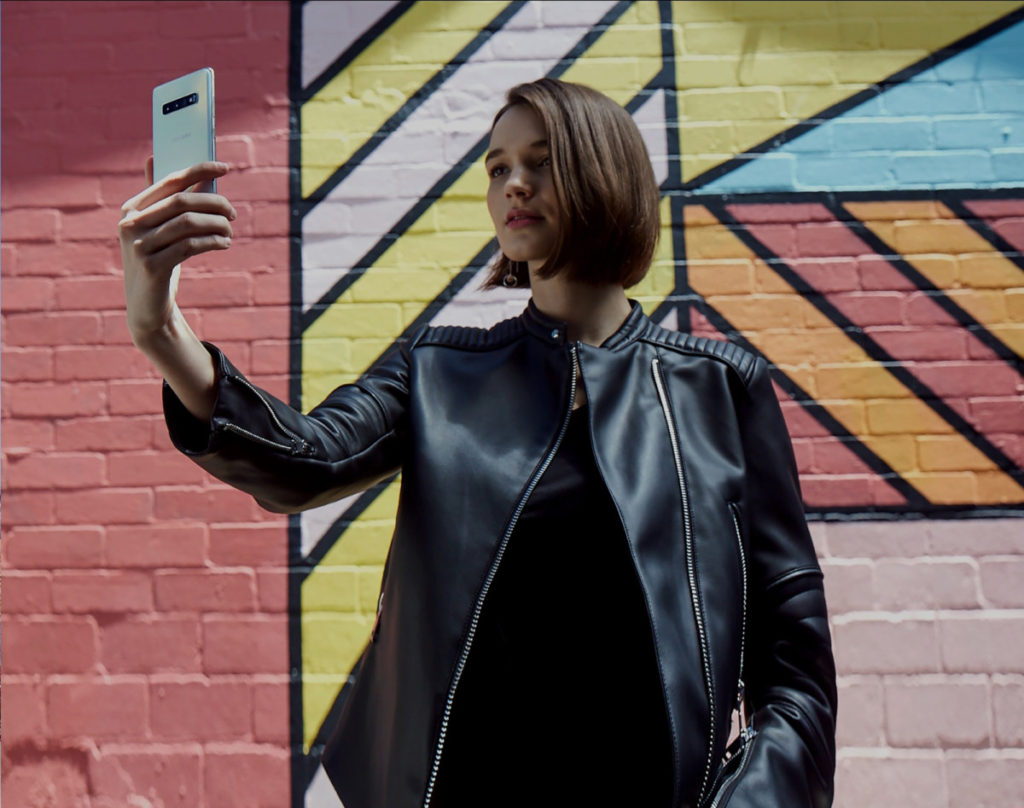 The Galaxy S10 is the mainline variant of the phone that will have a 6.1-inch QHD+ Dynamic AMOLED display, an Exynos 9820 processor running their latest One UI and Android Pie as well as two storage options – either 6GB RAM/128GB storage or 8GB RAM and 512GB of storage, expandable via a microSD card. The battery powering it is a 3,400mAh job juiced via a USB Type C port and has their Wireless Powershare reverse charging tech built in. 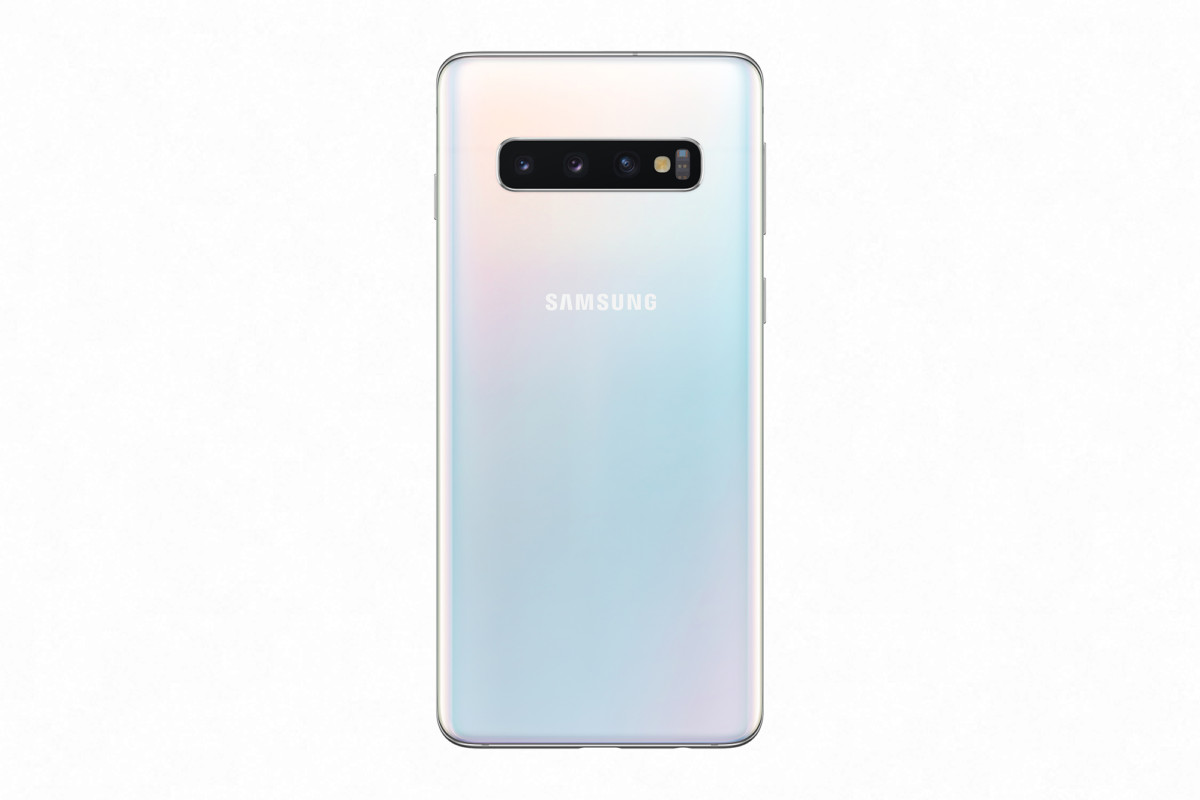 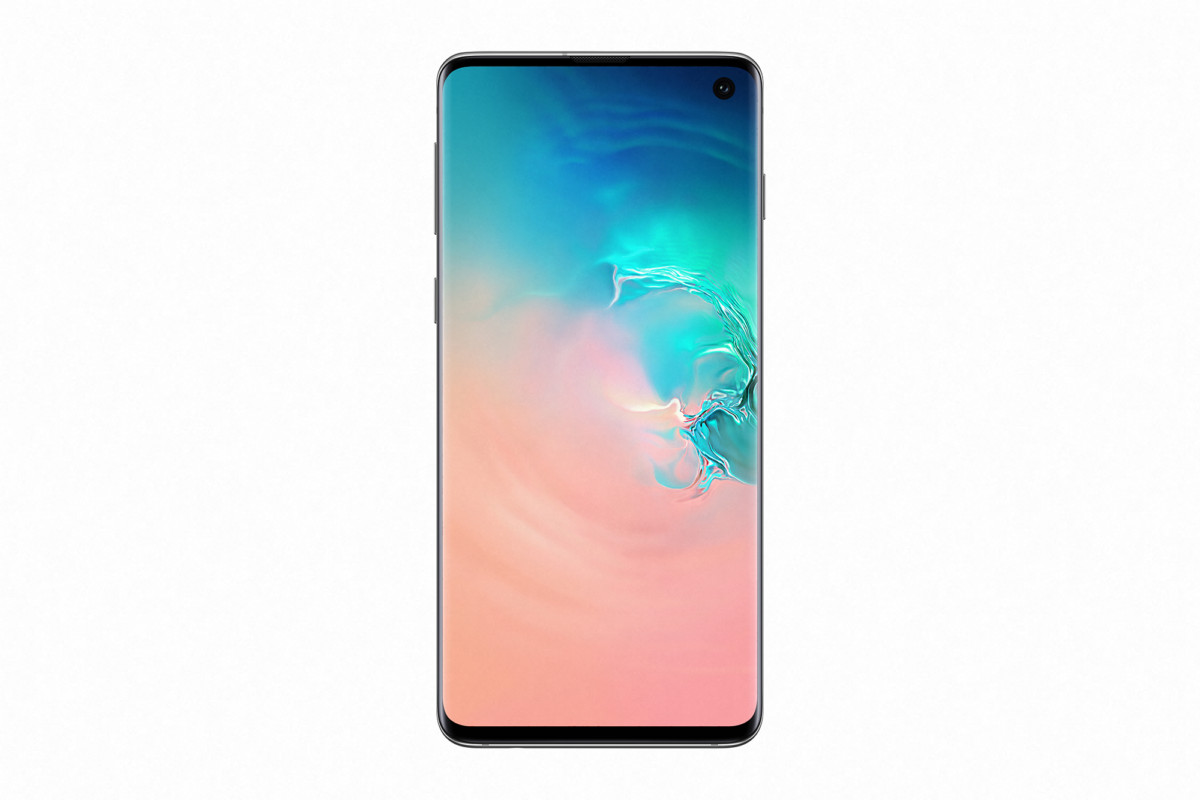 The rear triple camera array for the Galaxy S10 is akin to that on the Galaxy S10+. We’re looking at a triple camera with a 12-MP f/2.4 telephoto lens that has 2x optical zoom and OIS, a 16-MP ultra wide angle f/2.2 camera and a primary 12-MP camera with Dual Pixel tech, OIS and Dual Aperture tech that can mechanically change from f/1.5 to f/2.4 as the situation demands. The selfie camera on the Galaxy S10 consists of a single 10-MP camera that can capture 4K videos.

The Galaxy S10+ has mostly similar specifications under the hood in terms of the aforementioned rear triple cameras and Exynos 9820 processor as the S10 but upguns everything else. 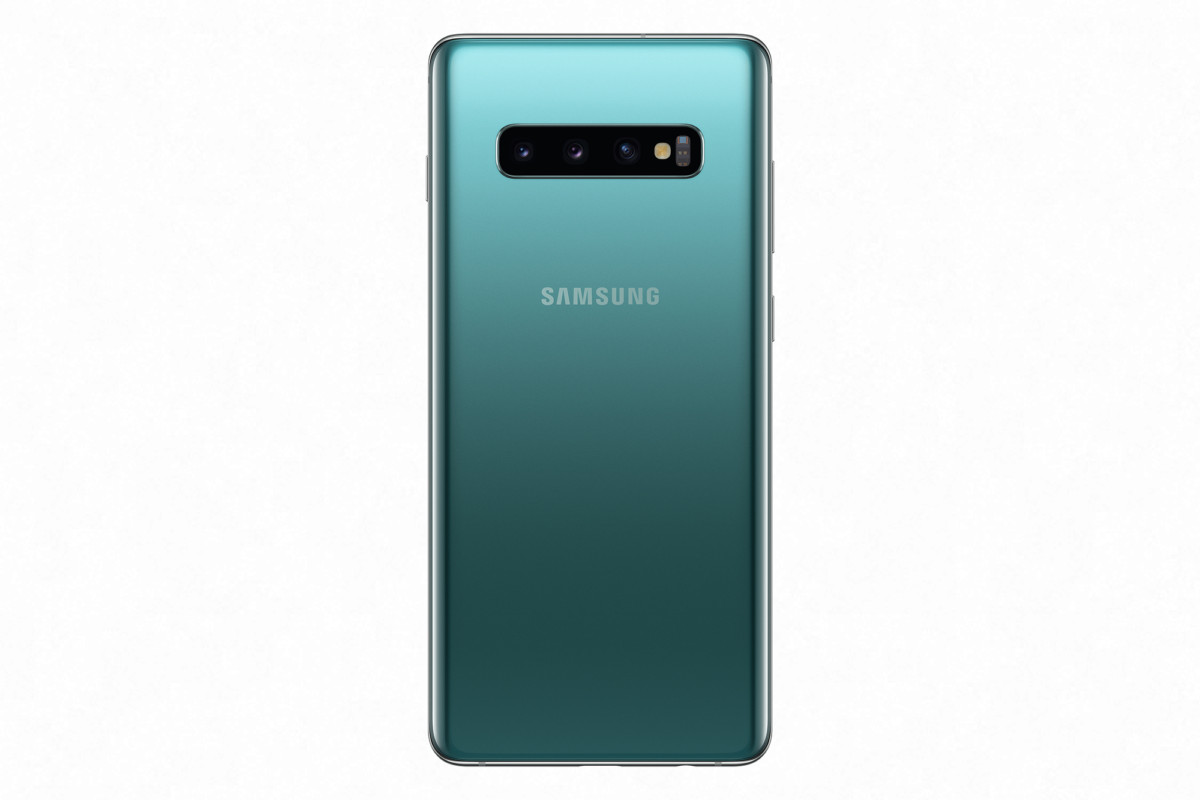 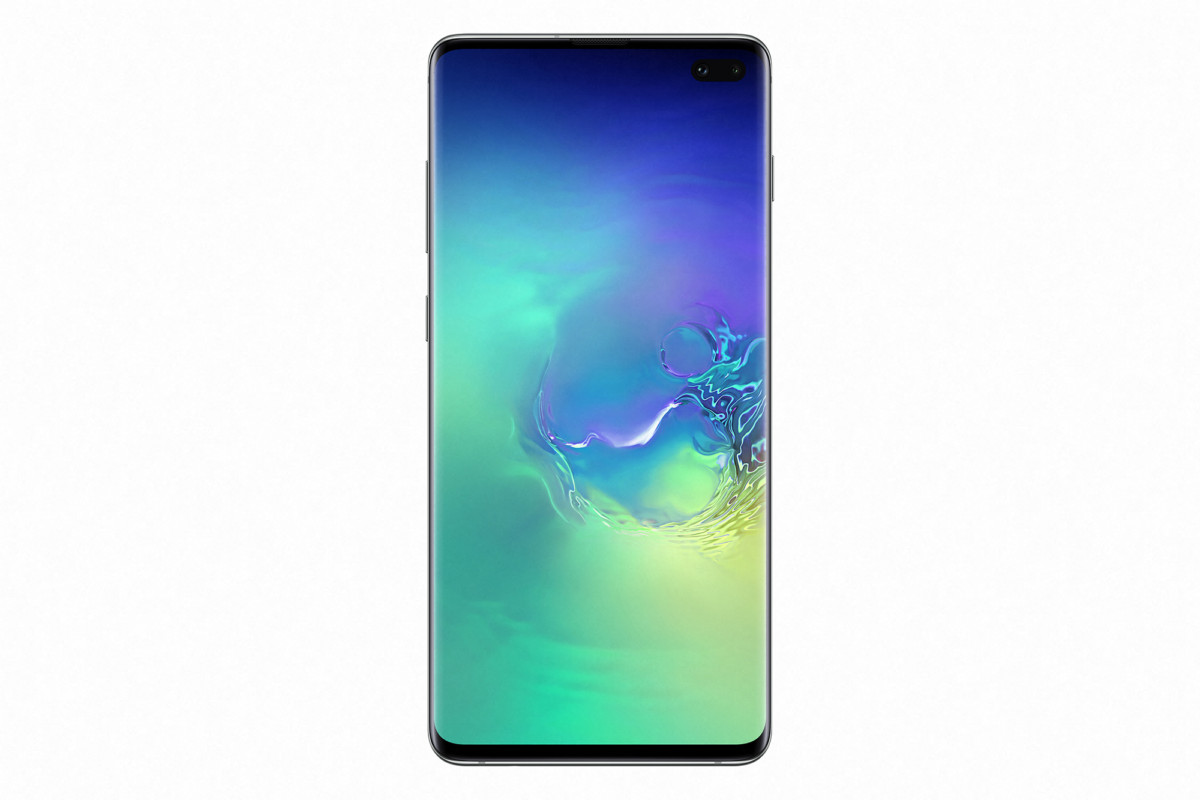 The front has a larger 6.3-inch QHD+ Super AMOLED display while the phone crams in a larger 4,100mAh battery. The front camera of the S10+ has a better dual camera array with a 10-MP F/1.9 primary camera capable of 4K videos and a secondary 8-MP f/2.2 camera with Live Focus capabilities for sweet bokeh shots and group shots. Storage options consist of 6GB RAM/128GB storage, 8GB RAM/512GB storage and an absolutely mind boggling 12GB RAM/1TB storage variant which also comes in its own unique ceramic black or white finish.

The Galaxy S10e is the most compact and affordable variant of new Galaxy S10 family. It features a 5.8-inch QHD+ Super AMOLED touchscreen that ditches its siblings underglass Ultrasonic fingerprint reader in favour of a side-mounted fingerprint reader, has a similar Exynos 9820 processor as its siblings, either 6GB RAM/128GB and 8GB RAM/256GB storage variants and has a more modest rear dual camera array versus a triple array in the Galaxy S10 and S10+. 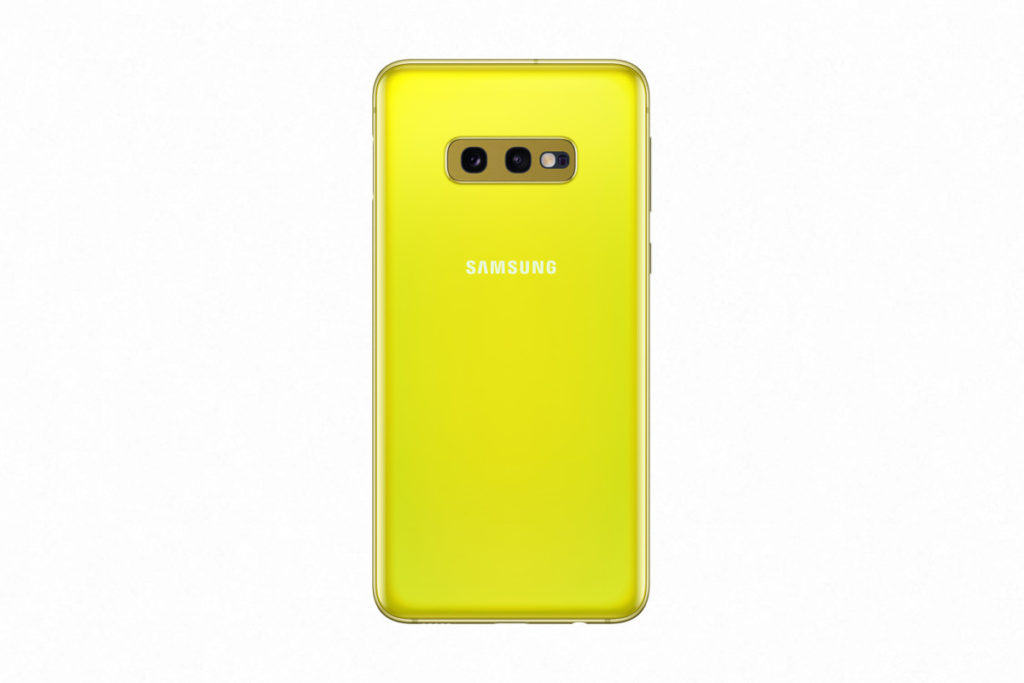 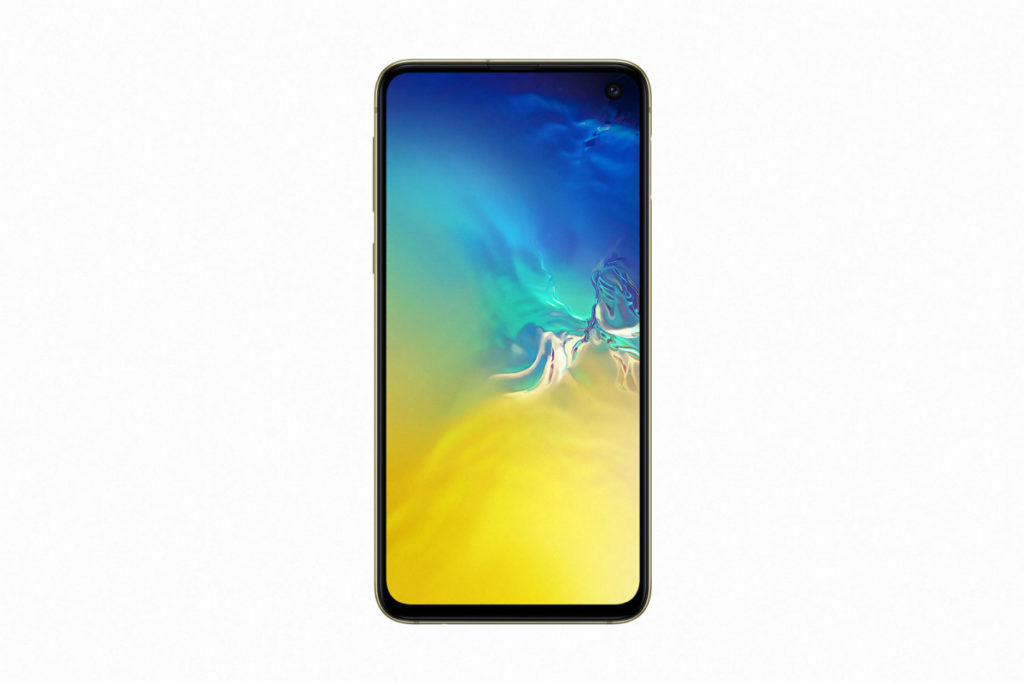 This rear dual camera eschews the optical zoom camera seen in its higher end siblings and instead has a 12-MP F/1.5-F/2.4 Dual Aperture camera with OIS and a secondary 16-MP F/2.2 wide angle camera. The front consists of a similar selfie camera as the S10 with a 10-MP F/1.9 camera capable of 4K videos. It also has the smallest battery of the bunch at 3,100mAh. Colour options are similar as its siblings with Prism Black, Prism White and Prism Green though it also has a unique colour of its own dubbed Canary Yellow.

Just to sum things up, here’s the specifications of what the new S10 series has to offer with the following list, in particular its storage configurations being specific to Malaysia. Other regions will presumably have their own mix of colours and configurations: 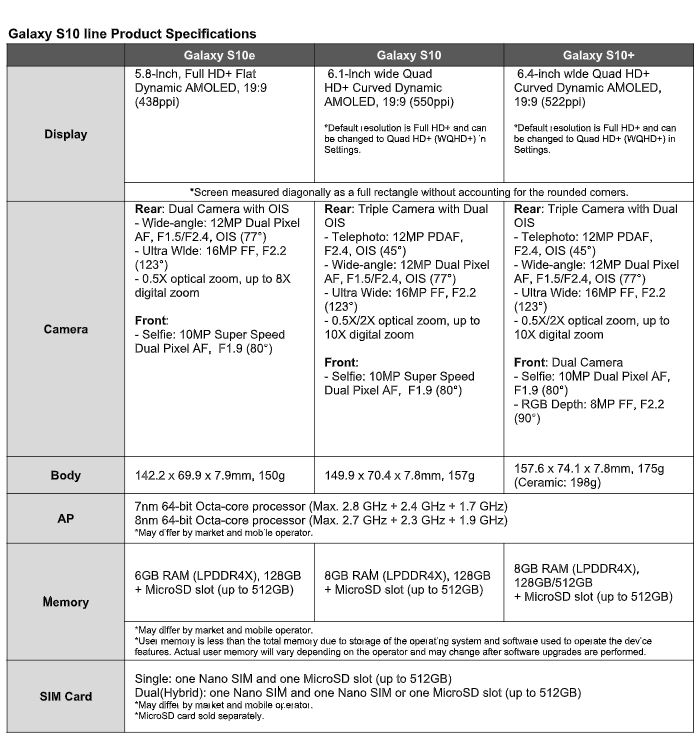 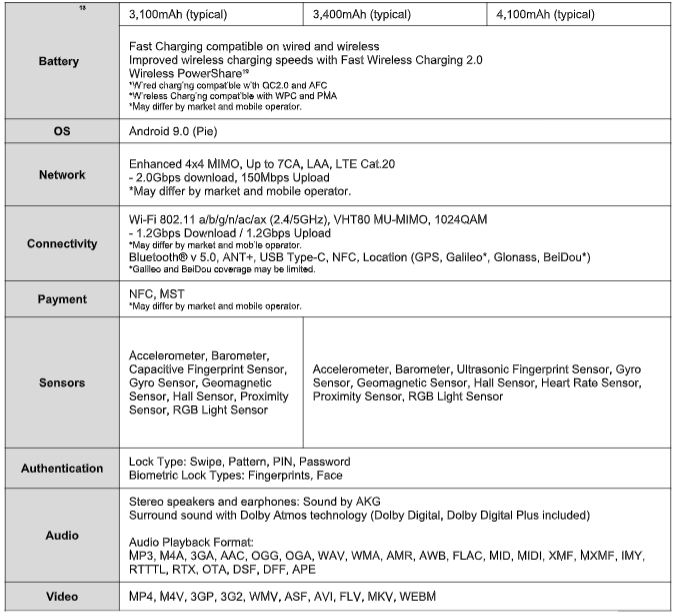 At Unpacked 2019, Samsung also revealed just how much the new phones cost with prices for the Galaxy S10e starting from US$749 (RM3,045), the Galaxy S10 from US$899 (about RM3,655)  and the Galaxy S10+ from US$999 (about RM4,062). These prices aren’t indicative of how much it will cost when it lands in Malaysia as taxes and other factors like shipping have to be taken into account but Samsung Malaysia has revealed the prices and  other details for their Galaxy S10 series preorder programme .