It is that time of year again when rumours are rife and everyone gets on the grapevine to speculate as to what Samsung will offer in their next high-end premium flagship Note series phone. Usually, the leaks are limited to speculate renders or the inadvertent odd release or two of a casing for the phone but this time around, one ardent leaker has revealed and effectively confirmed that the Galaxy Note 10 series will also have a larger Galaxy Note10+ variant and a Galaxy Note10 as well.

Three shots have been released by Slashleaks via TechTalkTV. The three shots confirm several things but most importantly that the Galaxy Note 10 series will come in at least two variants – a smaller Galaxy Note 10 and a larger Galaxy Note10+ which is pictured in the leaked images.

There’s really no news on the grapevine at all of a smaller sub-sized Note series phone that would be smaller than a Note10 and it’s unlikely to exist either seeing as most Note series users ‘want’ larger screens to go with their S Pen styluses not smaller ones.

Speculation is also rife that another variant called the Galaxy Note 10 Pro exists but seeing the nomenclature of the Galaxy S10 series, it’s unlikely that they do so and the fable Pro is likely a misnomer for the Note10+. 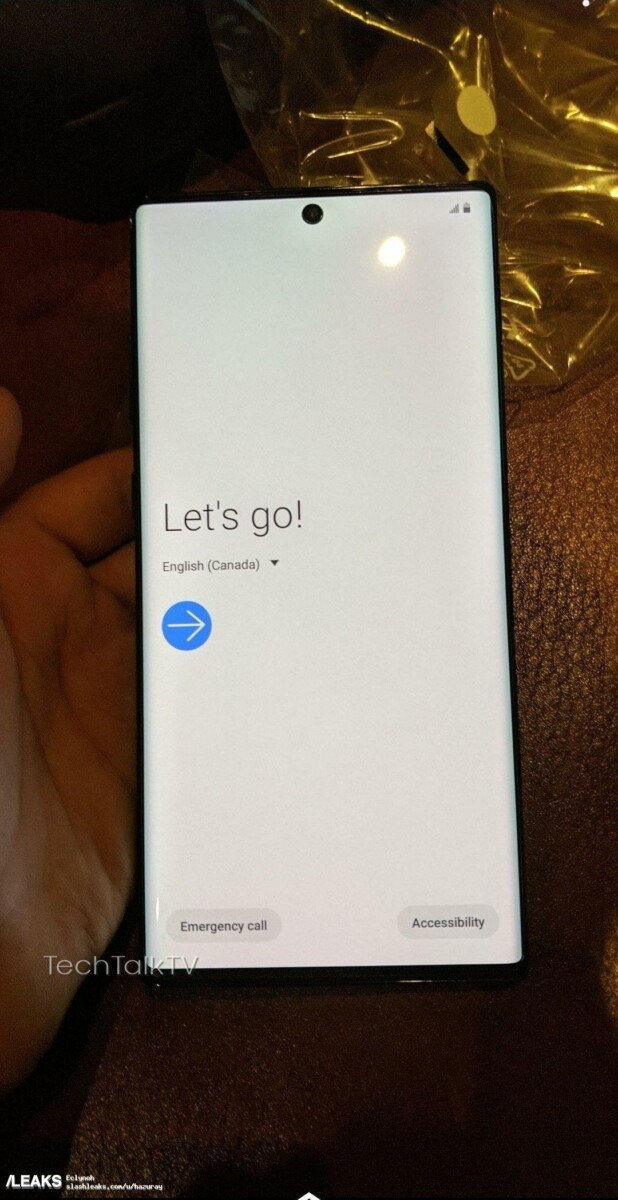 The first image shows a straight up-front image of the Galaxy Note10+ boot-up screen that confirms the name of the phone. The second is another front-facing shot that shows the user registration walkthrough rigmarole with a clean white background and interestingly enough Canadian English as a language option.

Of more immediate import is that the Note 10+ moves its selfie camera from the upper right corner as seen in the Galaxy S10+ and the S10 into the centre of the upper quadrant phone which is a slightly odd departure in terms of design language. The front is also nearly all display which is an impressive sight indeed. The backplate image is smudged and has all the resolution of a potato but confirms one important thing – the placement of the rear camera array which is vertically aligned in the fashion of an iPhone rather than the Galaxy Note9’s horizontal array. The shot is smudged but what looks like a rear triple camera array can be made out in some fashion along with a dedicated LED flash on the side. 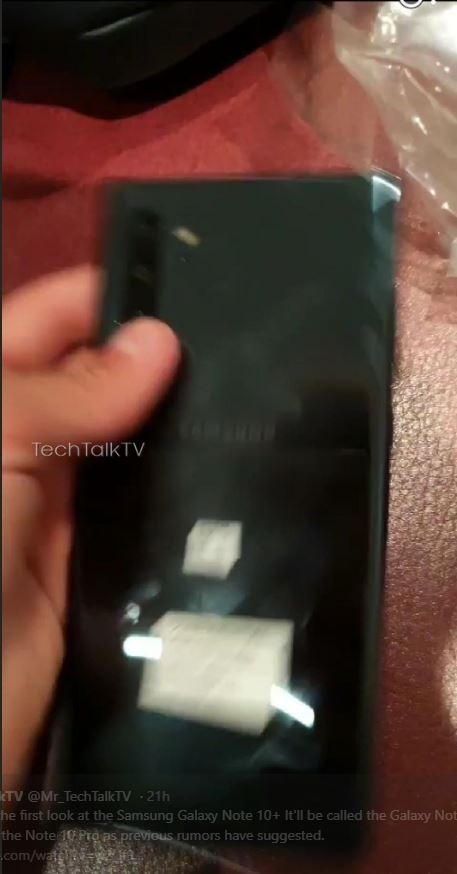 As far as the veracity of this particular set of photos go, they look rather legit though they could possibly be an early engineering sample or a prototype as they evaluate different form factors or firmware before mass production such that the final version of what will appear on store shelves may vary from what we see here. Still, even if taken with a grain of salt, these designs for the Galaxy Note10+ are a bold step as it shows Samsung is not relying on convention and putting the best design features possible into their most powerful phone for the year. We’ll keep you posted on any new Galaxy Note10 or Galaxy Note10+ updates or leaks as we get them.