Samsung has revealed a pleasant surprise ahead of CES 2020 as they’ve announced the launch of not one but two affordable smartphones for their flagship Galaxy S series and Galaxy Note series line dubbed the Galaxy S10 Lite and the Galaxy Note 10 Lite. 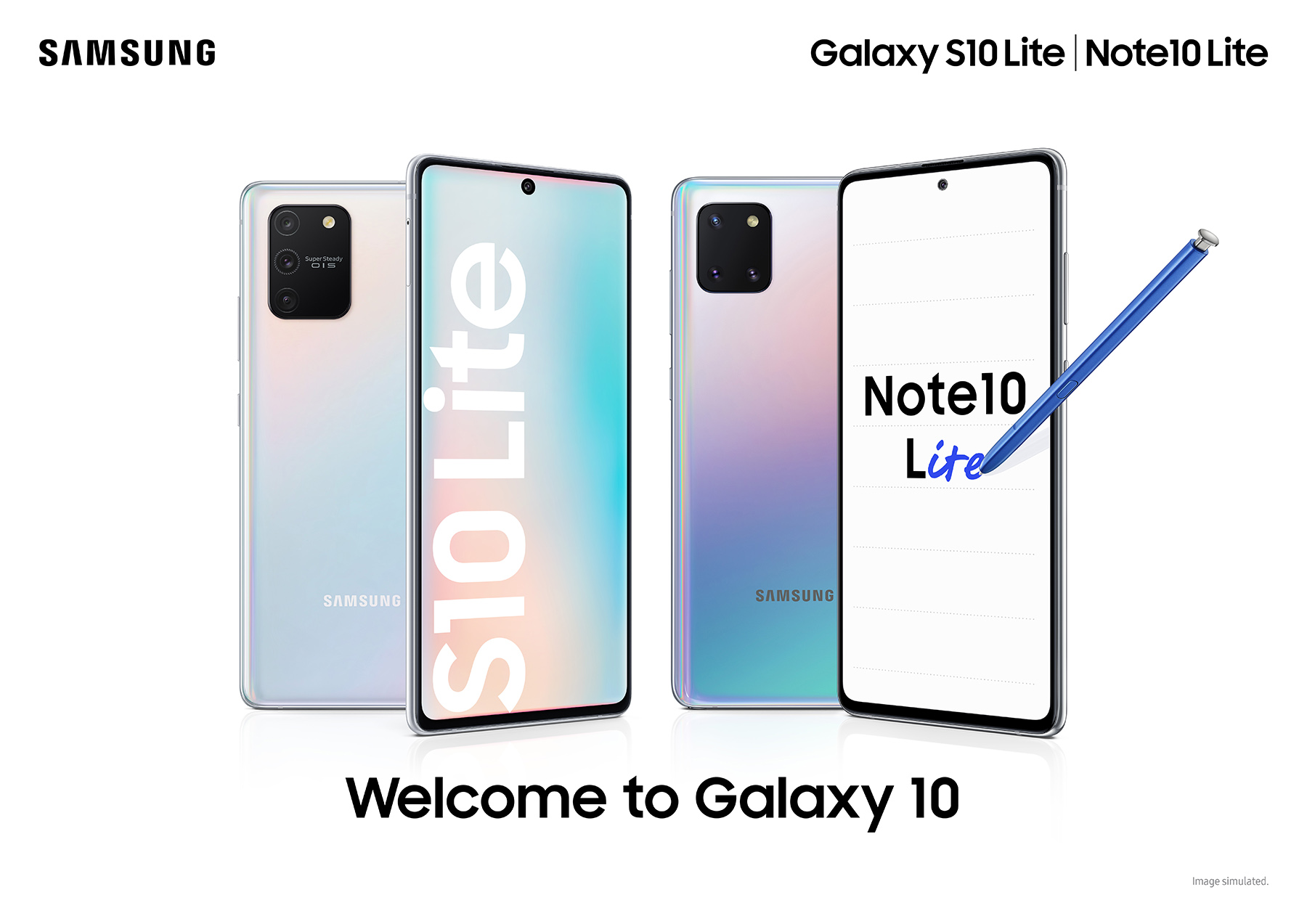 The new Galaxy S10 Lite and Galaxy Note10 Lite act as the most affordable versions of their product lines while retaining the key features that made their more powerful siblings bywords in power and performance such as their top-shelf cameras, Bixby virtual assistant support, Samsung Pay and, in the case of the Galaxy Note10 Lite, the vaunted S Pen stylus of its siblings.

Both phones are somewhat similar to each other on a few key points, in particular both have a similarly sized 6.7-inch FHD+ Super AMOLED display, front-facing 32-MP selfie camera and a 4,500mAh battery though they differ in terms of what processors they pack, what rear camera array they have and what processors they run on top of the more obvious difference of the Galaxy Note10 Lite packing an S Pen stylus.

They’re also still more powerful than the likes of anything from the Galaxy A series smartphones so that it outclasses the likes of an Galaxy A50S or a Galaxy A70 on paper.

Here’s a closer look at how they both stack up… 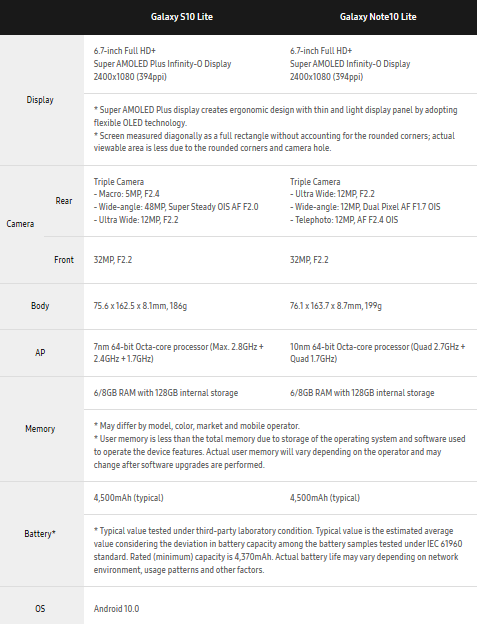 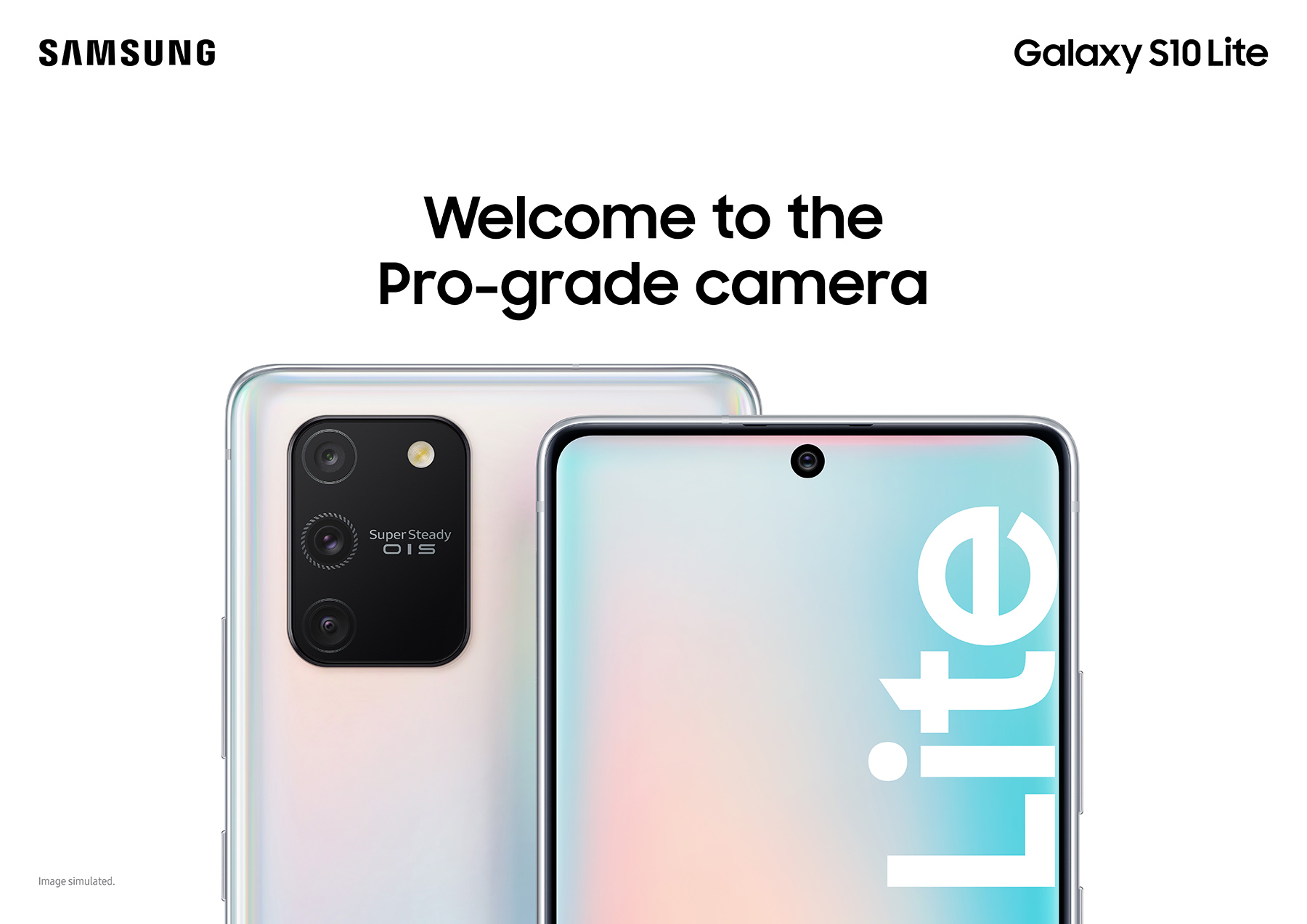 The processor has yet to be revealed in detail but its stated to be a 7nm 65-bit octacore processor (Max. 2.8GHz + 2.4GHz + 1.7GHz), either 6 or 8GB RAM and 128GB of storage and a triple rear camera array that consists of a primary 48-MP F/2.0 sensor with OIS, their Super Steady image stabilisation tech, a 12-MP camera with an ultra-wide lens and a 5-MP F/2.4 macro camera. The front selfie camera is identical to the Galaxy Note10 Lite with a 32-MP F/2.2 sensor.

Keeping it powered is a 4,500mAh battery that has fast charging support with the phone weighing in at 186g while being 8.1mm thin. Colour options include Prism White, Prism Black and Prism Blue. 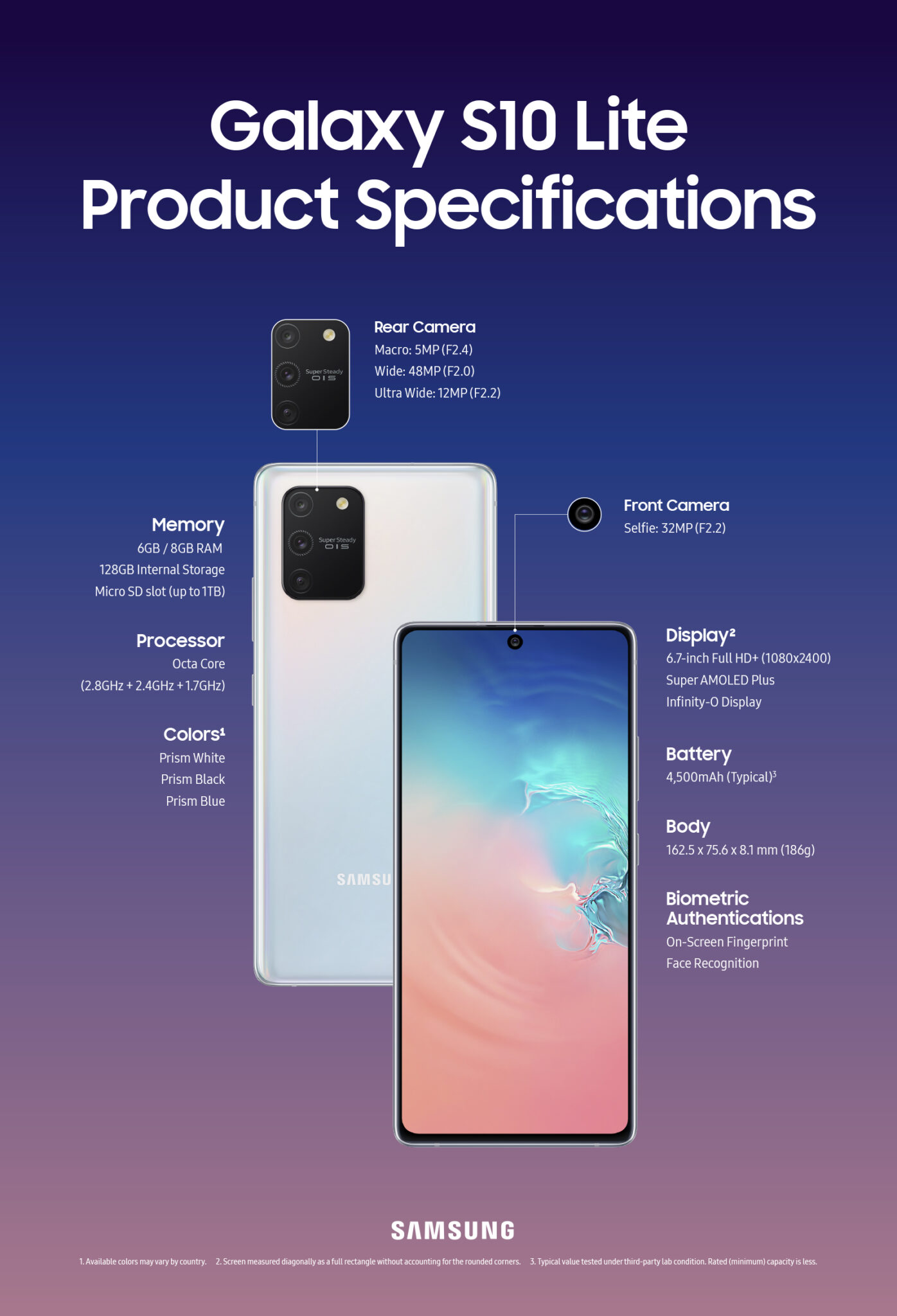 The Galaxy Note10 Lite comes with a similar  6.7-inch Full HD+ Super AMOLED Infinity O display up front as the Galaxy S10 Lite and a similar 4,500mAh battery with fast charging though it weighs more at 199g and is a bit thicker at 8.7mm. 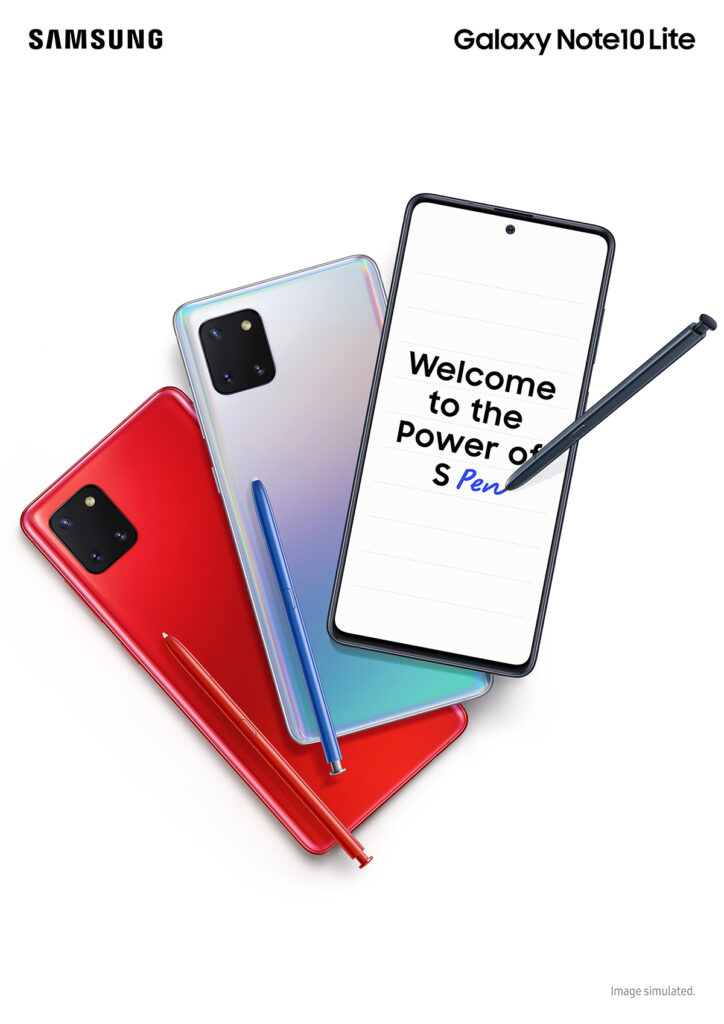 While you’d be tempted to just look at screen size alone, it’s worth it to note that a Dynamic AMOLED display is a grade better than a Super AMOLED panel, as the former has HDR10+ certification as well as eye comfort certification from TUV Rheinland. Even so, Super AMOLED panels are still vastly one of the best looking displays that you can see in a smartphone.

The exact processor hasn’t been announced but it’s stated to be a 10nm 65-bit octacore processor (Quad 2.7GHz + Quad 1.7GHz), either 6GB or 8GB RAM and 128GB of storage. The rear camera array differs from the S10 Lite as it uses three 12-MP cameras with dual OIS and Dual Pixel autofocus.

The primary wide-angle camera has an F/1.7 aperture and Dual Pixel tech as well as OIS while the other OIS-stabilised camera is the telephoto camera which has 2X optical zoom. The last camera has an ultrawide F/2.2 lens for for capturing swathes of the landscape.

As you’d expect, the Galaxy Note10 Lite has an S Pen stylus with their Bluetooth Low-Energy (BLE) support built in like the Galaxy Note9 though it’s unclear if it will have the same gesture controls as its siblings. 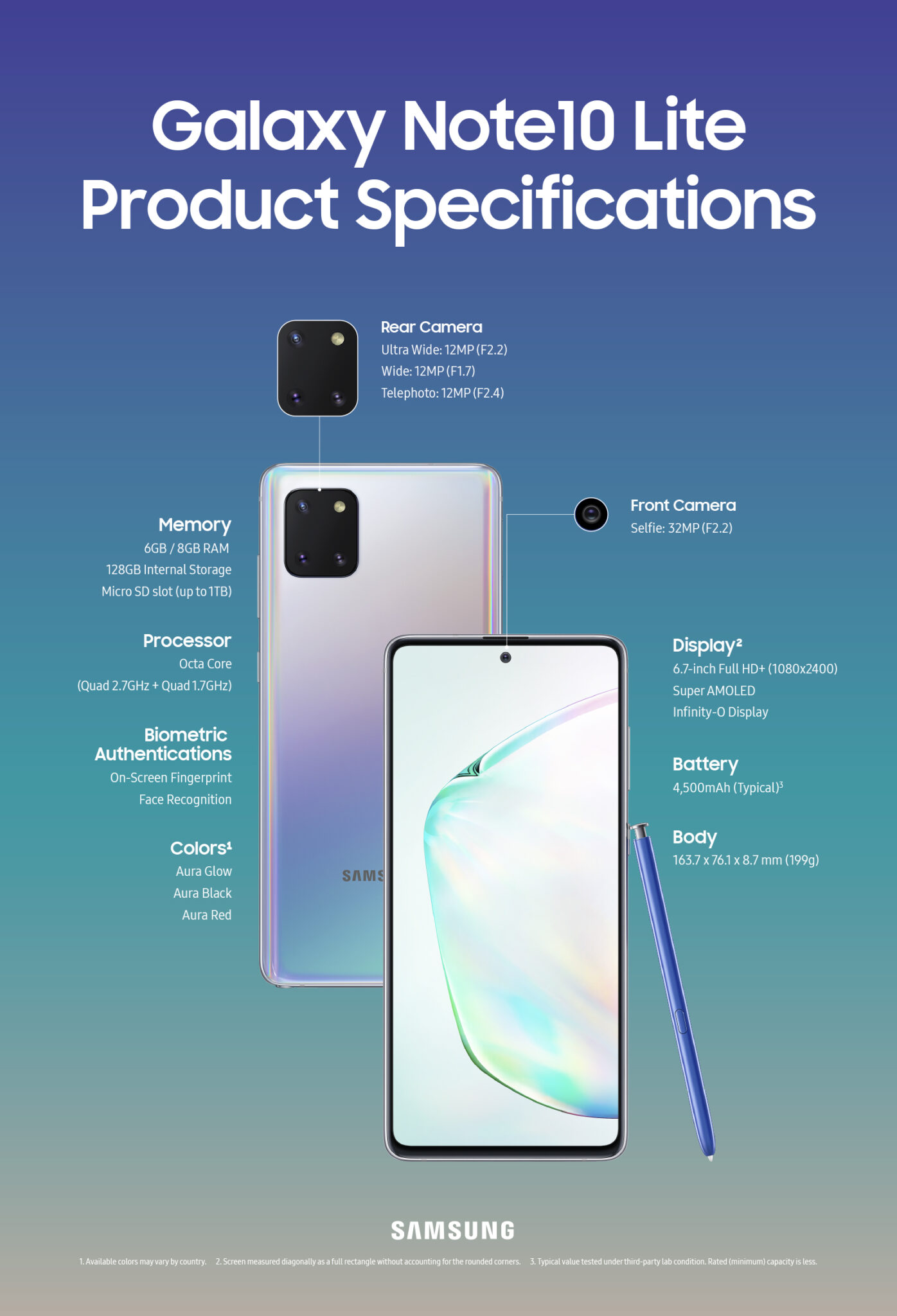 Still, everything is up in the air as there’s no word on how much both phones will actually cost or if they arrive in Malaysia but odds are good that it will so it’s a matter of when.