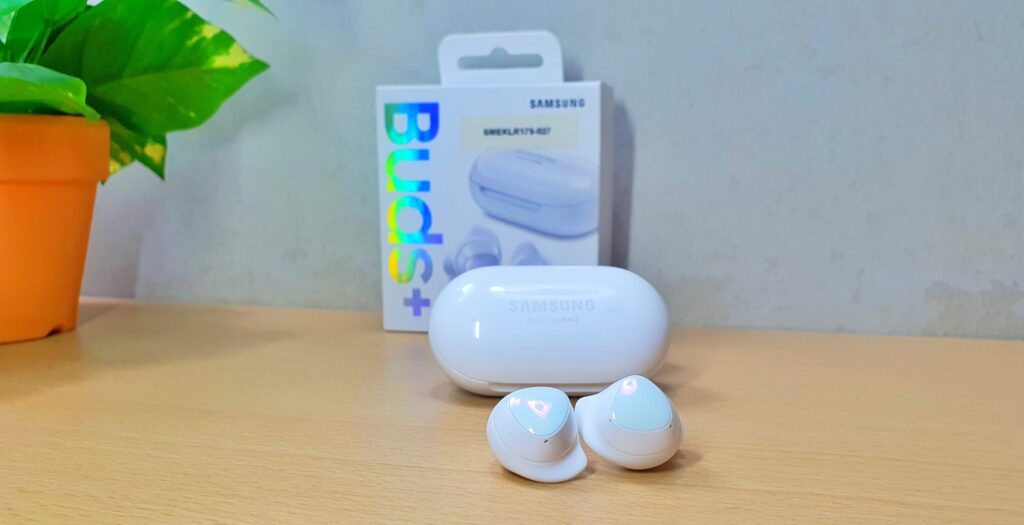 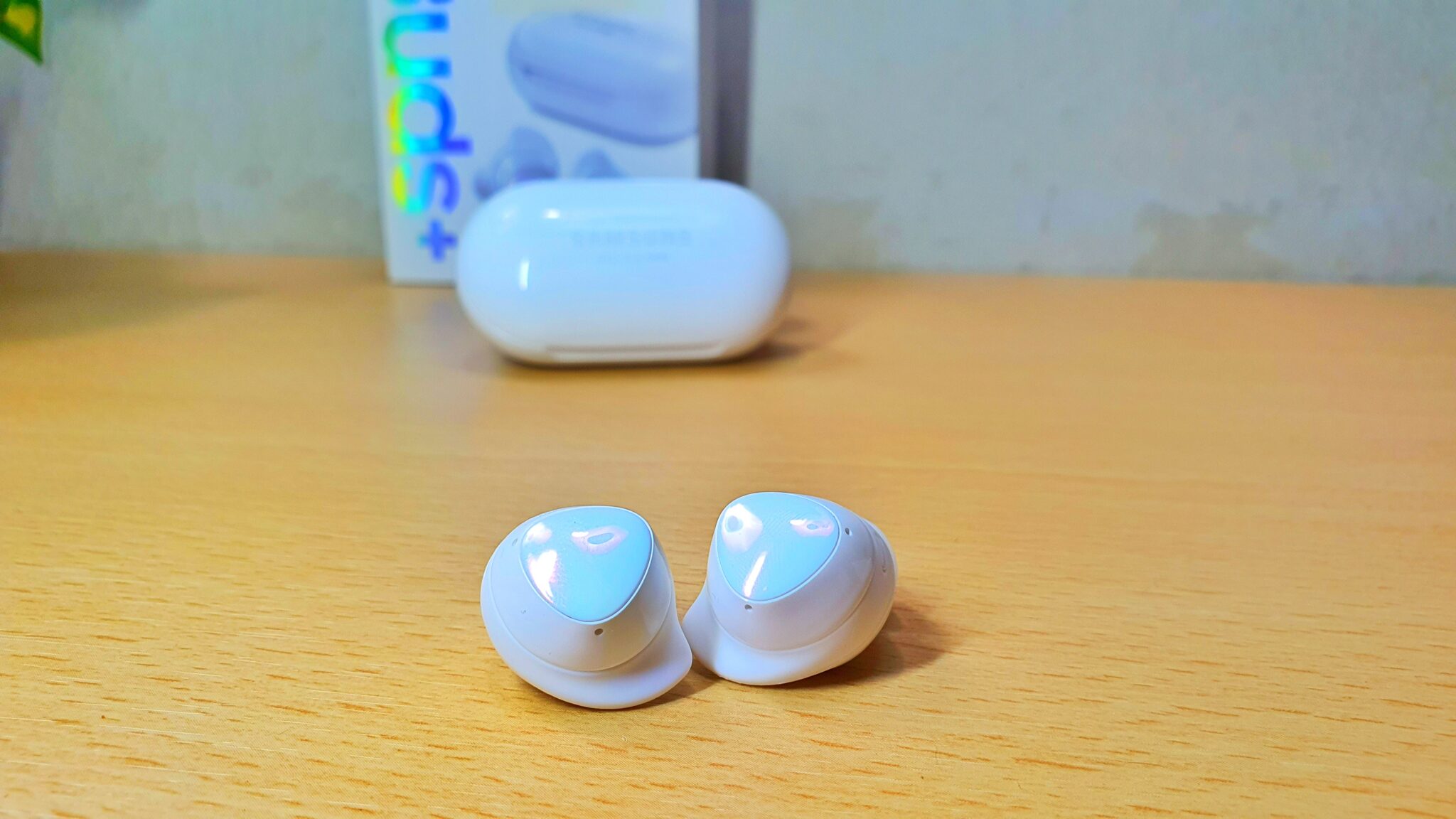 Externally, the Galaxy Buds+ are a spitting image of the original Galaxy Buds with a similar size and shape for its earbuds and charging case though it has significantly enhanced performance in every way. It’s also a bit pricier than the original at launch with an RM599 price tag versus the RM499 price point of the earlier Galaxy Buds though this has just enjoyed a reprice down to RM349. That extra investment does go towards quite a few upgrades under the hood.

Both the Galaxy Buds+ and Galaxy Buds have a similar lozenge-shaped charging case and earbud design though the case and part of the earbuds of the newer Galaxy Buds+ have a shiny pearlescent white finish versus the matte white in the older version. Both the new and older versions also come in black. The newer Galaxy Buds+ does have more colour variants like a shade of pink and blue along with a deep Jennie red that is a South Korean exclusive for now. Here’s how the specifications work out:

The biggest upgrade is in terms of battery life. The Galaxy Buds+ are rated for 11 hours of playback time on a single charge with an additional full charge in the charging case. This works out to 22 hours of use time in total.

Unlike the 1-way driver in the older Galaxy Buds, the new Galaxy Buds+ have two – a woofer and a tweeter tuned by AKG in each earbud. It also has three mics – 2 inner and 1 outer mic which is one additional inner mic more than the older version to offer better overall call quality. 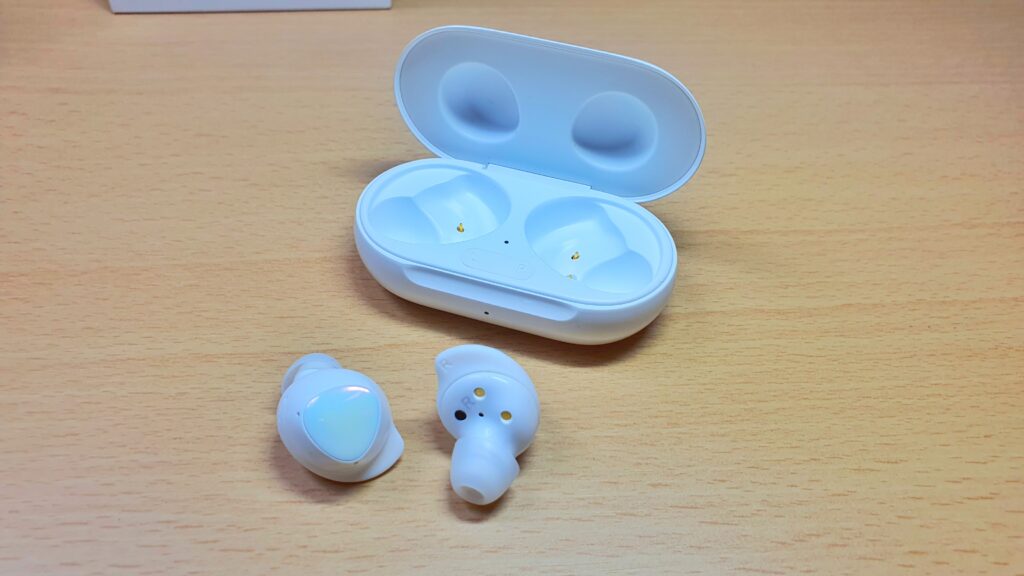 Another feature that the Galaxy Buds+ possesses is integration with Spotify, allowing you to manipulate playback straight off the buds. They also possess compatibility with Apple’s iOS so iPhone owners can interact with the higher functions of the Galaxy Buds+ via a downloadable Galaxy Buds+app.

Unfortunately, the Galaxy Buds+ still lack active noise cancelling and primarily rely on passive noise insulation with the silicone earbud forming a tight seal in your ear canal. The earbuds themselves are also only rated IPX2 for splash-resistance so it’s not a good idea to bring them out in the middle of a downpour or to use them next to the pool.

Out of the box, the Samsung Galaxy Buds+ come with two additional pairs of differently sized silicone ear buds, two pairs of smaller and larger ear wings as well as a smooth pair of rubber rings. Users can interchange the ear buds, opt to put in the larger ear wing, and for some, omit them entirely by using the rubber rings in place of the ear wings. It also comes bundled with the obligatory USB Type-C charging cable. 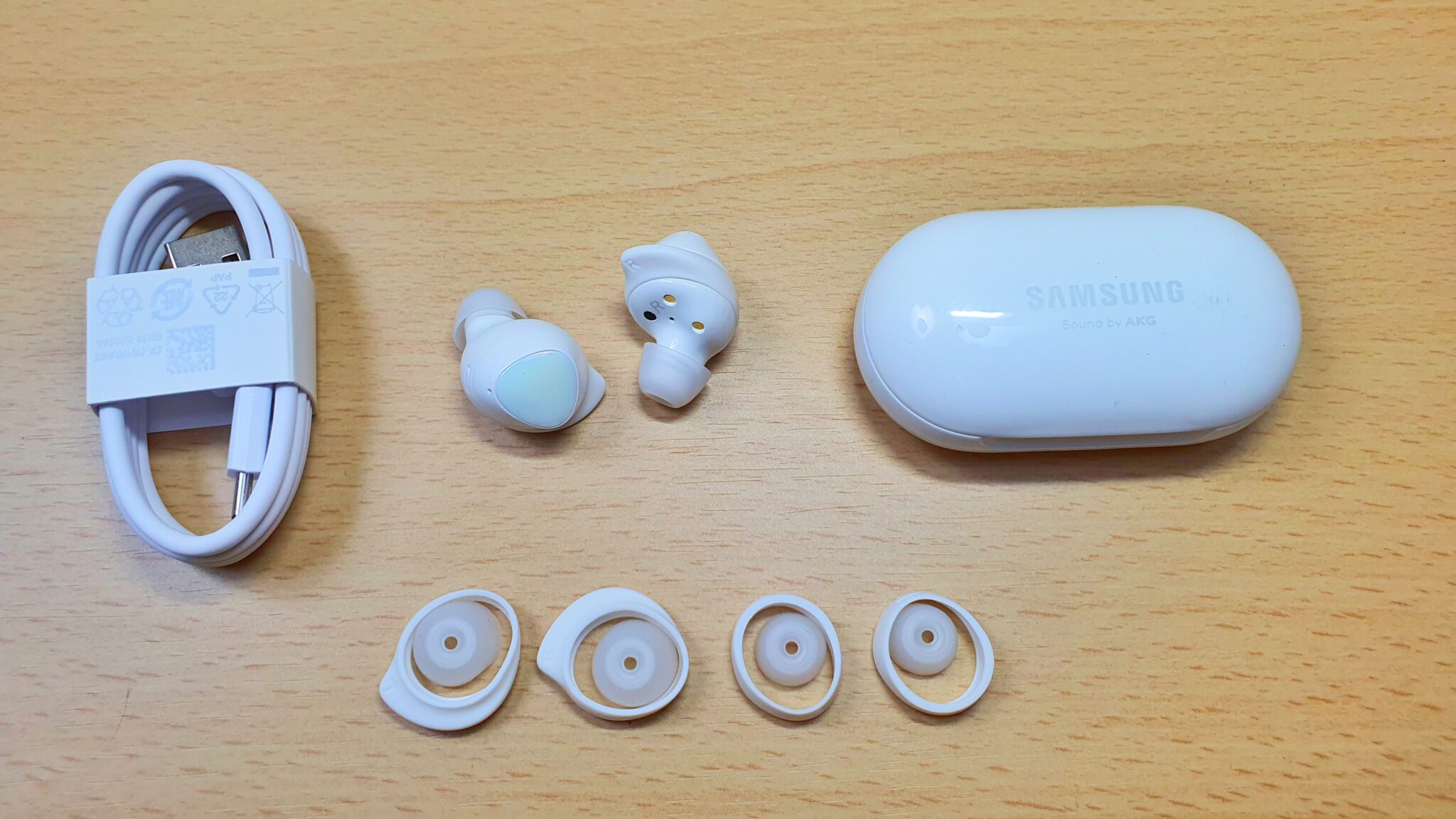 Each earpiece has a touch control surface up top and a groove that holds the swappable rubber ear wings that perch in your ear lobe. The inner ear tip hosts a soft silicone earbud that sticks in your ear canal to offer a modicum of passive noise insulation.

The charging case itself has an indicator light up front to show that it’s charging along with a USB Type C port at the rear. The case itself is like a pebble that’s smooth to the touch, light and very easy to pocket. It also supports Qi wireless charging and can be charged in the field straight off a Galaxy S20 or S10 series phone by plonking it on the back of the phone via Wireless PowerShare mode. 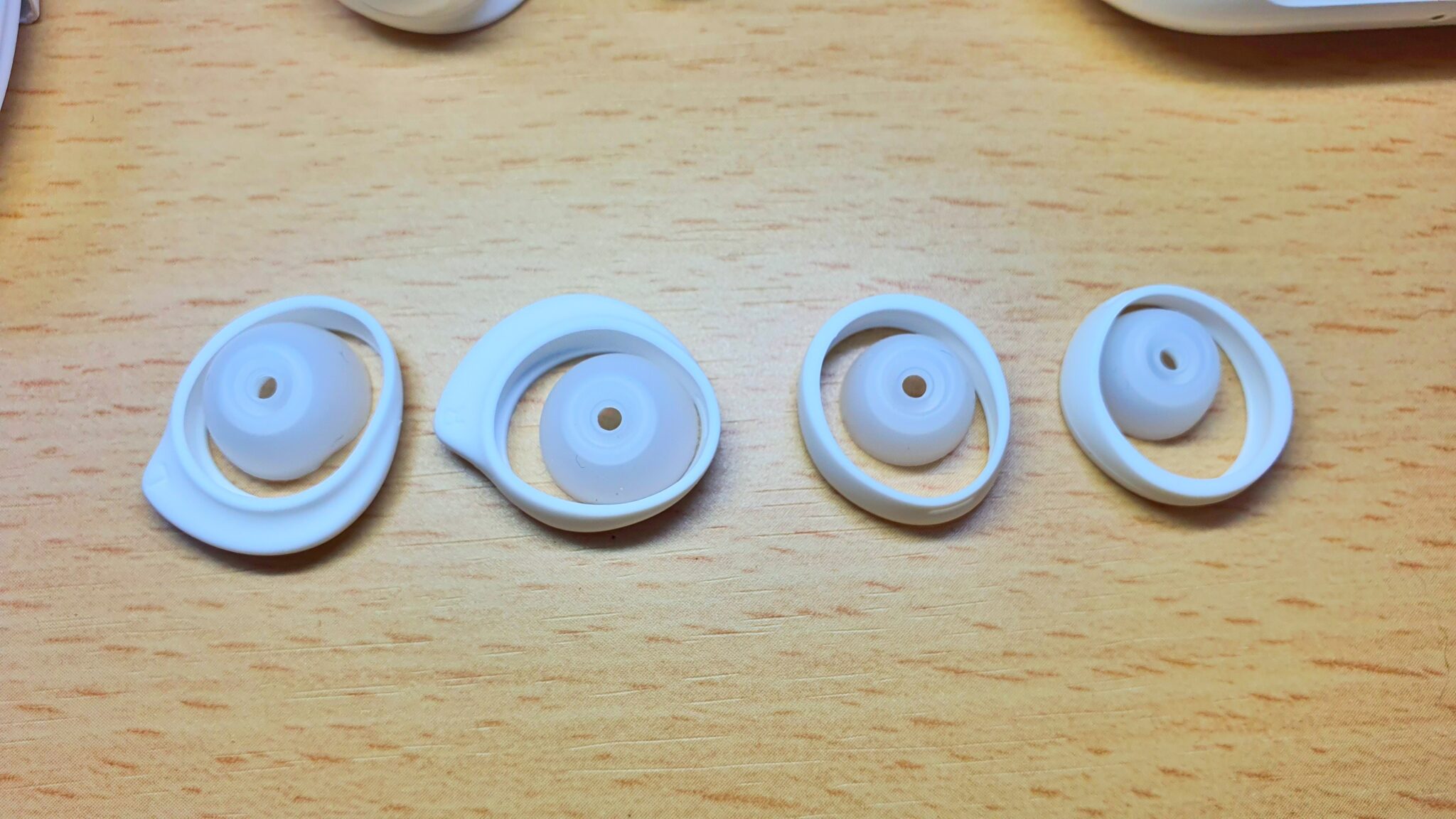 The first time you’re donning it, it’s well worth the trouble to test out the different ear wings and earbuds that they have bundled in the box to find which fits your ears best as a secure fit offers better audio performance. That and ensuring it doesn’t fly off when you’re sprinting for the train or some other mishap.

Wearing them was a very comfortable affair, helped in part with the snug fit and the fact that each earbud is exceptionally light at 6.3g.

Getting it up and running requires you to download the Samsung Wearable app which is free for both the Google Play store and the Apple App store. That means it will work with most Android phones and iPhones of recent vintage. We tested it with a Galaxy Note10 and pairing was almost instantaneous via Bluetooth 5.0.

A single tap pauses or plays a track, a double tap lets you answer or cancel a call as well as advance to the next track while a triple tap plays a previous track. These commands are all hardwired into the Galaxy Buds+. The only assignable option you can customise is what happens if you touch and hold the control panel from a limited set of commands.

By default, holding down the control panel on the left earbud reduces volume while the right increases it. You can also assign it to turn ambient sound on or off. Alternatively, you can assign it to turn Spotify on or off. Unfortunately, you’ll have to sacrifice one control option on either earbud if you want Spotify interaction though you can simply perform any of these controls manually via your smartphone.

The Ambient Sound feature helps to pipe ambient sounds into the earbuds so you can be aware of pressing concerns like oncoming traffic or your barista yelling your name in the usual mangled fashion at Starbucks. There’s a substantial difference in turning it on and is advisable to do so if you’re wearing it outdoors. It also contributes towards better call quality as well though it in no way acts as active noise cancelling as it doesn’t act to negate outside sounds.

When subjected to our usual array of test tracks, the Galaxy Buds+ deliver significantly improved performance over the original Galaxy Buds, helped in no small degree with the addition of a dedicated woofer in each ear. 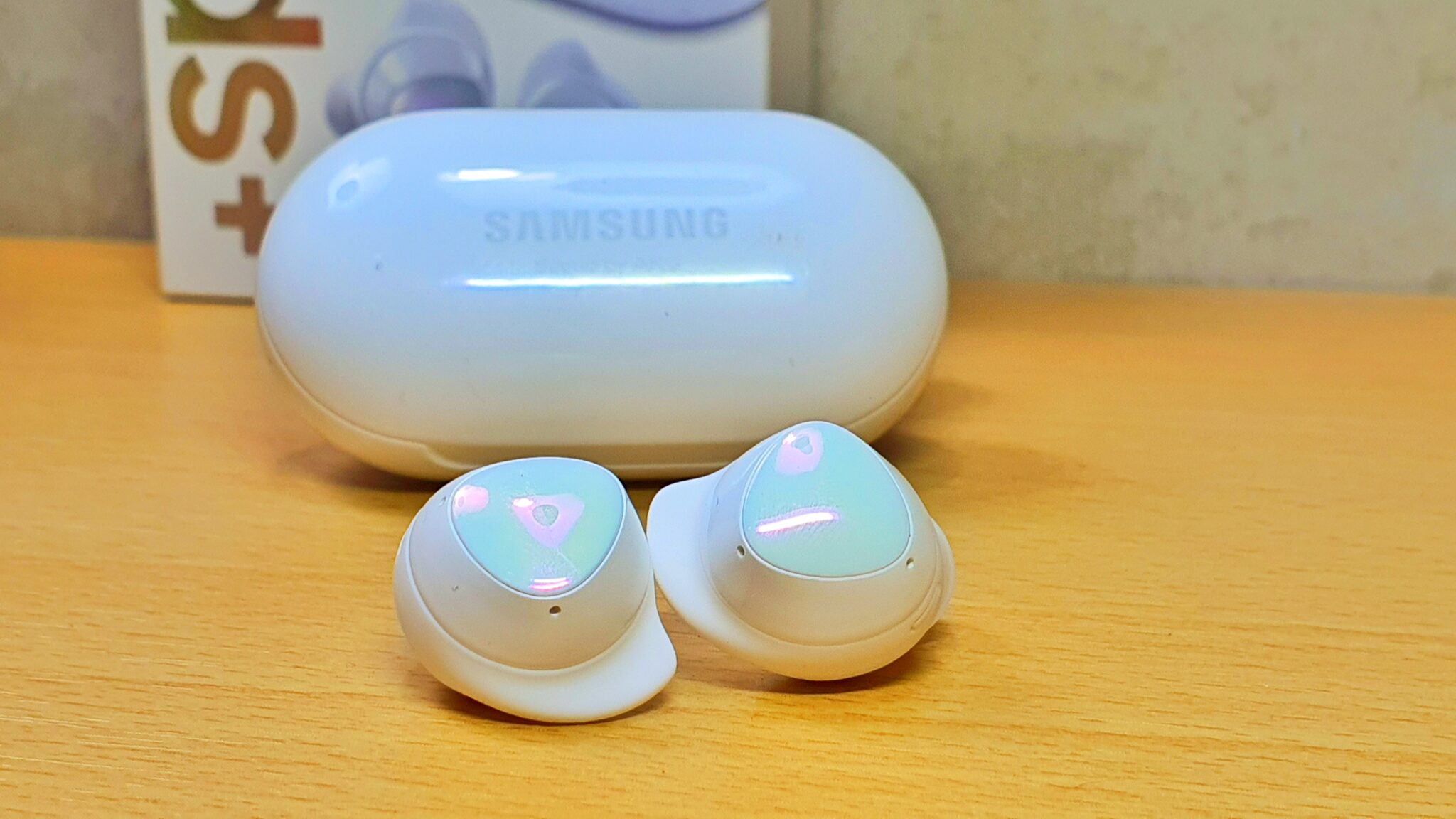 Seeing its intended purpose as a general purpose pair of earbuds, Samsung has tuned it with a relatively balanced sound signature with a slight emphasis on mids and a bit thumpier bass than usual which holds it in good stead for the usual plethora of K-pop, rock and other mainstream genres. If this doesn’t quite appeal, you can customise the sound to other settings that include a Bass Boost, Clear and Treble depending on your tastes. There’s no active noise cancellation so loud noises will still seep through which means you’ll have to ensure that the ear buds form a tight seal in your ear canal.

Vocals were well rendered with Norah Jones vocals in ‘Nightingale’ sounding crisp and detailed with good distinction from her guitar strumming solo. Bass response is delightful and lively with Bear McCreary’s signature ‘Prelude to War’ and its taiko drum solo sounding wonderfully ominous. BlackPink’s ‘Kill This Love’ with its impressive trumpet sounded richer and louder while each of the quartet’s voices were  pleasantly distinct from each other. It also acquitted itself well for gaming duties and for watching movies with the wailing zombies in Kingdom 2 on Netflix sounding suitably chilling indeed.

External ambient noise amplification worked as advertised, helping to amplify important critical external sounds like announcements and traffic while call quality off the earbuds was excellent with good clarity on both sides of the divide.

As far as endurance is concerned, the Galaxy Buds+ did not disappoint and ran just a few minutes short of the rated 12 hours of listening time before requiring a top-up from the charging case. With 22 hours of rated battery life, it has more than enough endurance to serenade you all the way to Las Vegas with plenty of extra juice to spare. 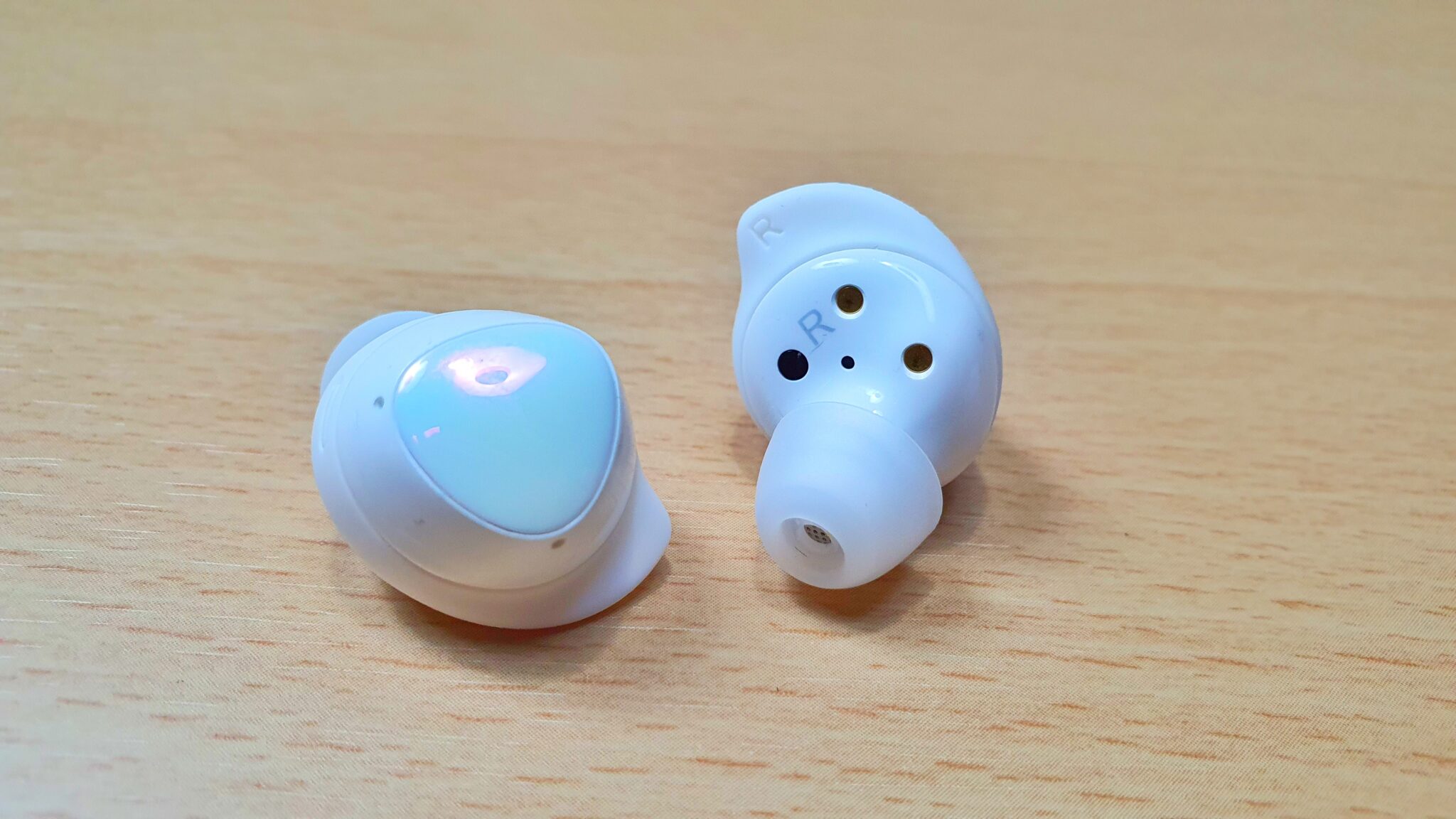 While better performing and much pricier contenders exist like Apple’s AirPods Pro and the Huawei Freebuds 3, the Galaxy Buds+ manages to strike a pleasing balance between performance and price though the lack of active noise cancellation and IPX2 splash proofing is a bit of a sore point. Well worth a look for those who already own a Samsung phone though others seeking good audio and long battery life will enjoy what it has to offer.

You can also check out Adam Lobo TV’s video review where he sums up the Galaxy Buds+ sublime virtues in the link below:

What we liked Impressive 11-hour battery life, works wonderfully with Spotify, wireless charging support, decent audio performance, supports iOS
What we didn’t Looks quite similar to the original Galaxy Buds, more robust water resistance would be welcome, no aptX codec
We say The Samsung Galaxy Buds+ is a significant upgrade over its predecessor, bringing almost double the battery life, enhanced call as well as sound quality, Spotify integration and iOS compatibility. It’s a solid general purpose pair of earbuds capable of keeping pace with you with its impressive battery life.