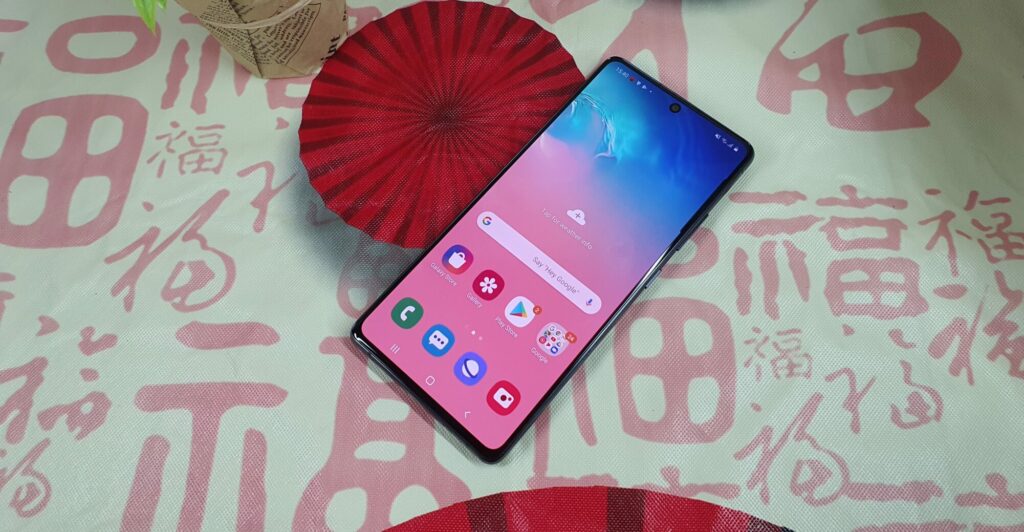 We’ve managed to get our hands on Samsung’s latest phone that aims to be the most affordable offering in their Galaxy S10 line-up that is even cheaper than the Galaxy S10e dubbed the Galaxy S10 Lite. Get comfy as we undertake one of the first Galaxy S10 Lite Malaysia previews right here.

The Galaxy S10 Lite which we first saw at CES 2020 represents a different tack for the premium mass flagship series as it attempts to offer a good chunk of the Galaxy S10 series’ features and performance at a much more affordable price point. 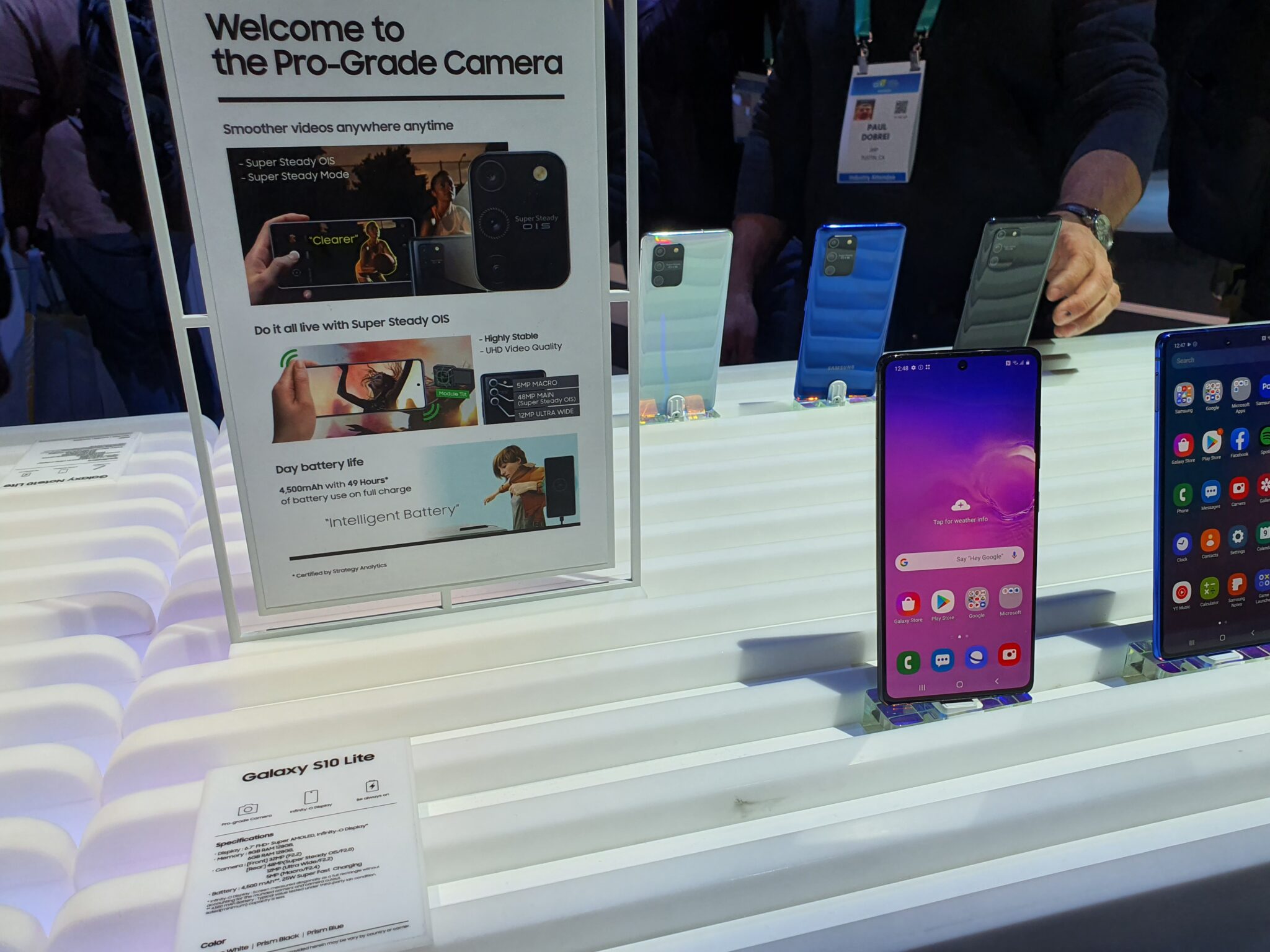 In that regard, the Galaxy S10 Lite is an impressive blend of proven features and technologies from the Galaxy S10 series combined with a series of hardware-based refinements in its triple camera array that Samsung has dubbed as Super Steady OIS which aims to offer much steadier video and image capture especially in scenarios that traditionally require a gyroscopically stabilised gimbal like action shots and the like. 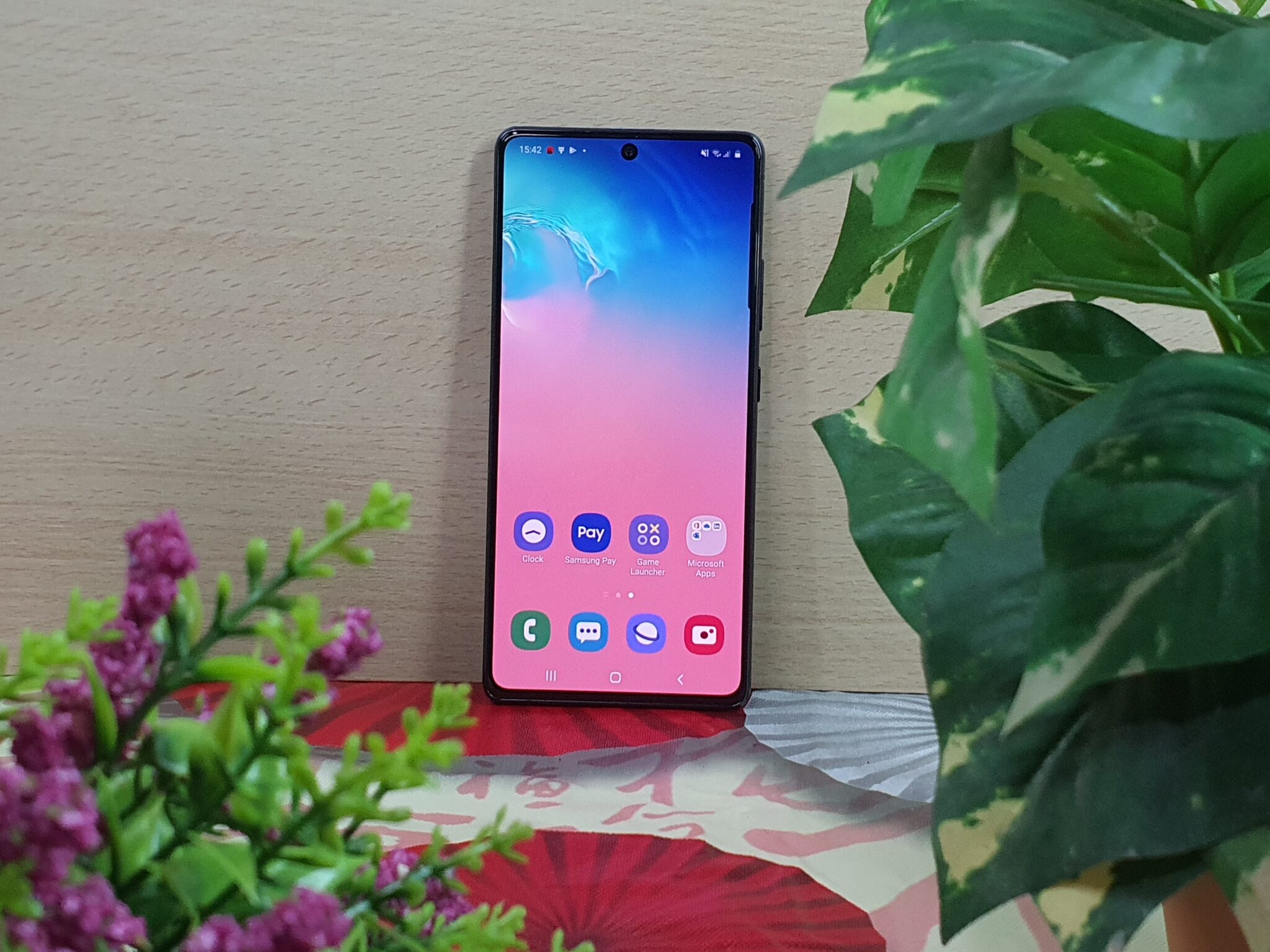 It’s a lofty proposition and one that builds on an earlier implementation in the last generation of Galaxy S smartphones that Samsung called Super Steady mode which relied on a large sensor and cropping the image to give a facsimile of image stabilisation though this was purely a software based solution.

We’ll elaborate more on the Super Steady OIS system later but it has been purported to even surpass existing flagships in terms of image stabilisation capabilities. We’ll put that to the test in our full-on review after this.

Externally, the Galaxy S10 Lite is both heavier and thicker by a modest margin than any existing S10 series phone, exceeding the thickness and weight of even the Galaxy S10+ at 8.1mm thick and 186g. The Galaxy S10+ maxes out at 175g and 7.8mm.

The backplate itself is primarily made of what is usually referred to as ‘glasstic’ – an amalgam of light polycarbonate laminated with a finish resembling glass to offer both lightness and an aesthetically pleasing finish. Our test unit came in Prism Black and was a fingerprint magnet indeed with even casual handling rendering up a smudges aplenty. 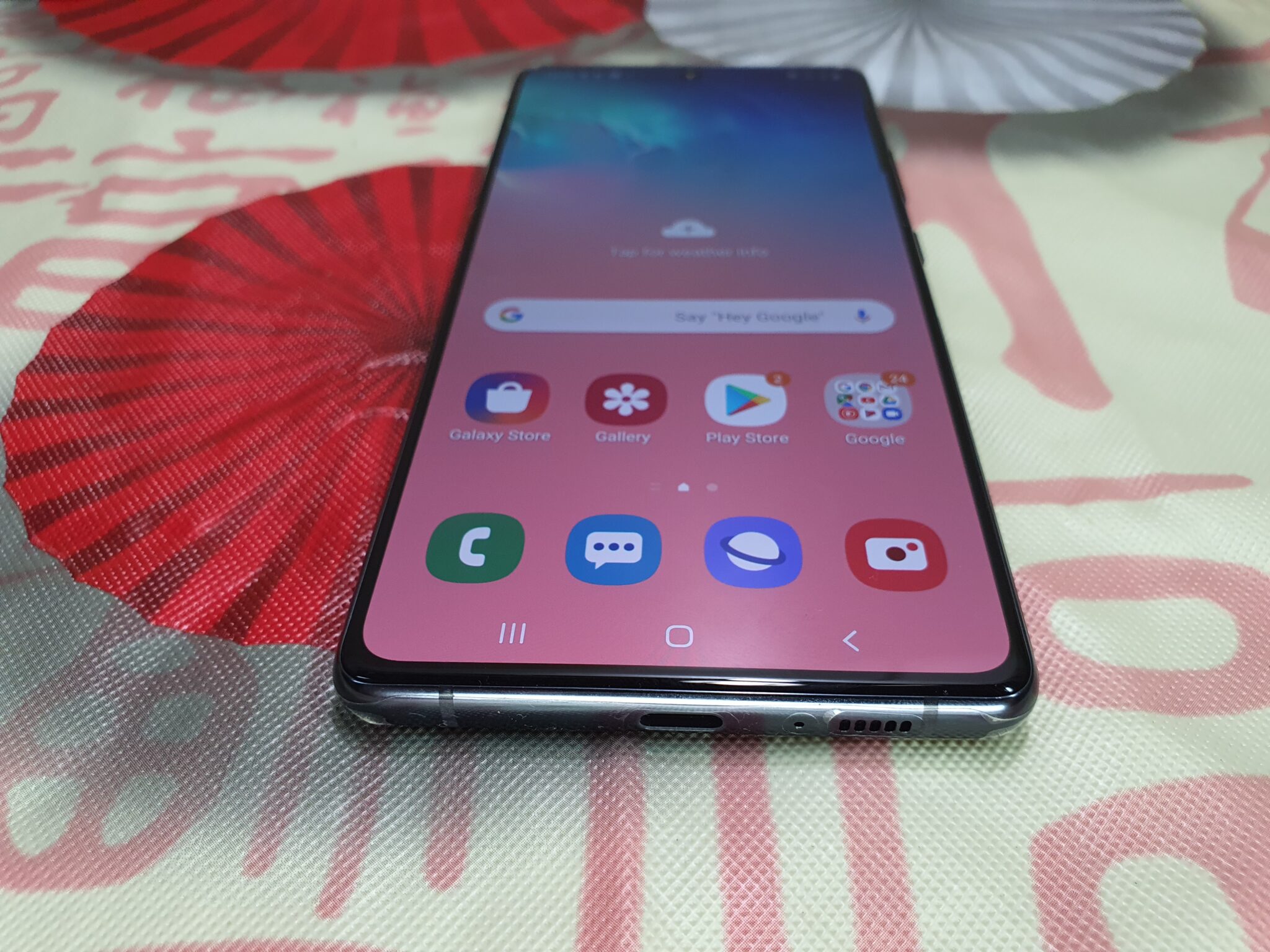 The new triple camera array itself comes with a primary 48-MP F/2.0 with the aforementioned Super Steady OIS, a secondary 12-MP ultra wide angle camera and a third 5-MP macro camera with the whole affair  housed in a rectangular camera bumped in the upper left corner. At first blush, it seems suitably premium indeed with the rest of the hardware in the phone lending it extra heft and weight. 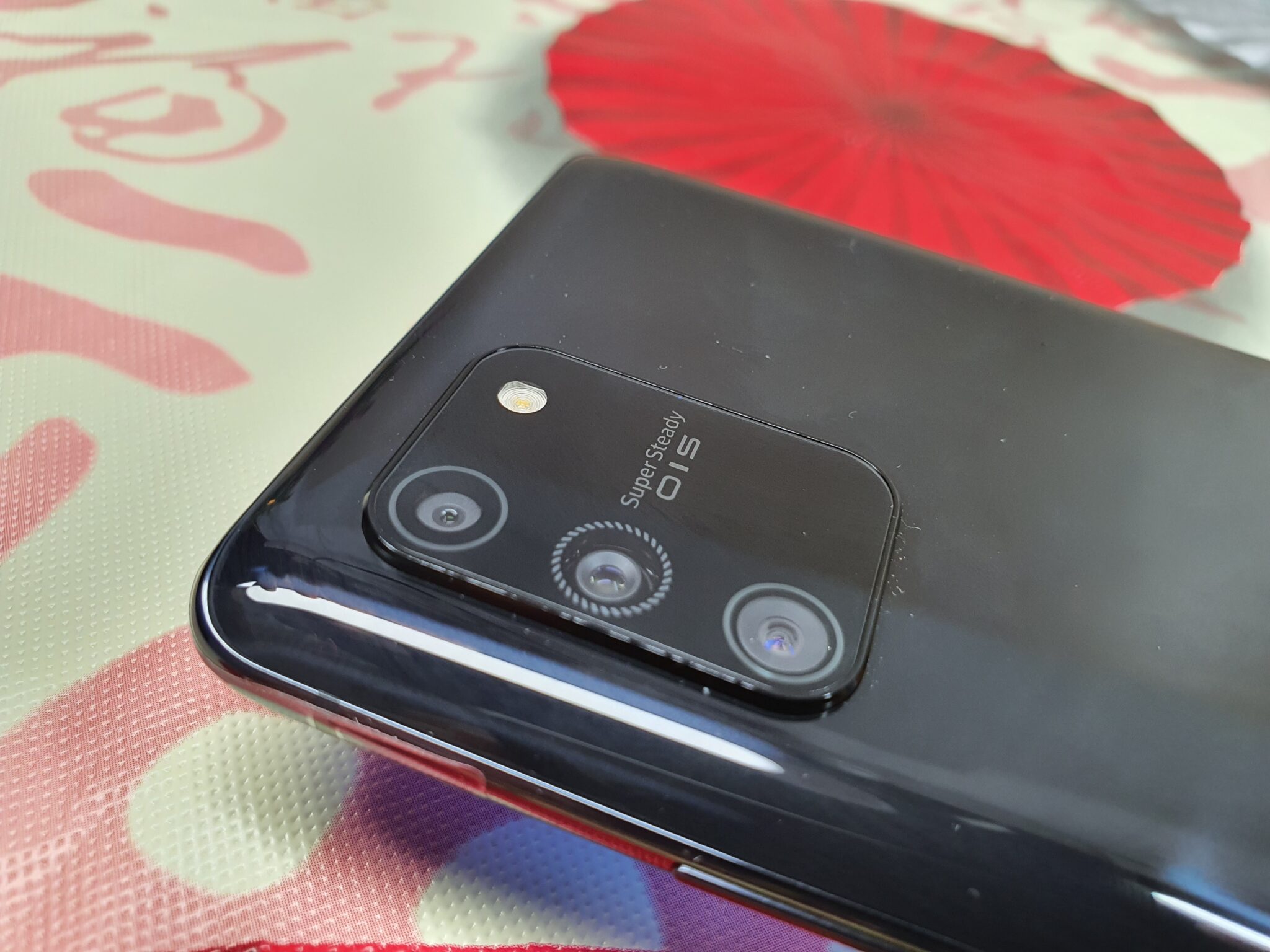 The sides of the phone itself are fortunately constructed of aluminium for sturdiness with the base sporting a sole mono speaker along with a USB Type-C port for charging duties on the built-in 4,500mAh battery which dwarfs even the 4,100mAh on the Galaxy S10 and Super Fast Charging tech. 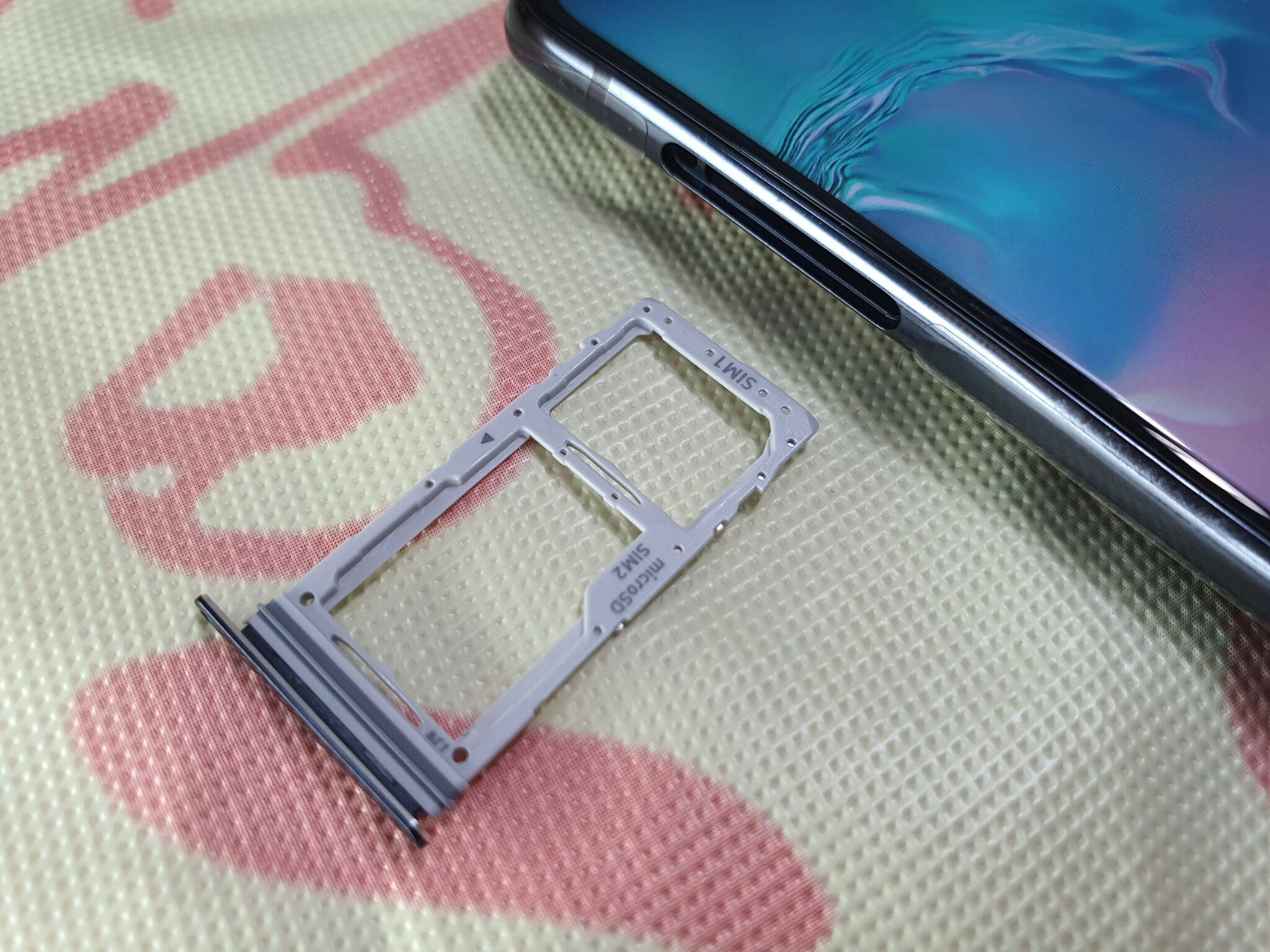 The left side is bare save for a hybrid SIM card slot (2 SIM or 1 SIM+ 1 microSD card)  though the right side of the phone has a power button and volume rocker with the oft maligned Bixby button completely eliminated from the design.

The top of the phone is otherwise bare save for a pair of antenna bands in the chassis and a tiny hole for the phone speaker. Traditionalists will be somewhat disappointed at the lack of a 3.5mm audio jack but it’s not a deal breaker in an age with increasingly more affordable wireless listening options.

The front of the Galaxy S10 Lite is where things get interesting. The phone comes with a generously sized 6.7-inch Super AMOLED Plus Infinity-O display with a punchhole on the upper quadrant for a 32-MP F/2.2 selfie camera; significantly upgunned in Megapixel count from what appears on any current Galaxy S10 series phone but somewhat less sophisticated than the dual camera array seen on the S10 and S10+. The Super AMOLED display itself is bright, vibrant and has an under-glass fingerprint reader.

We aren’t able to comment on what accessories come with the Galaxy S10 Lite nor what comes with it beyond the basic charger and USB Type-C cable as we were only provided with the phone itself ahead of the launch. 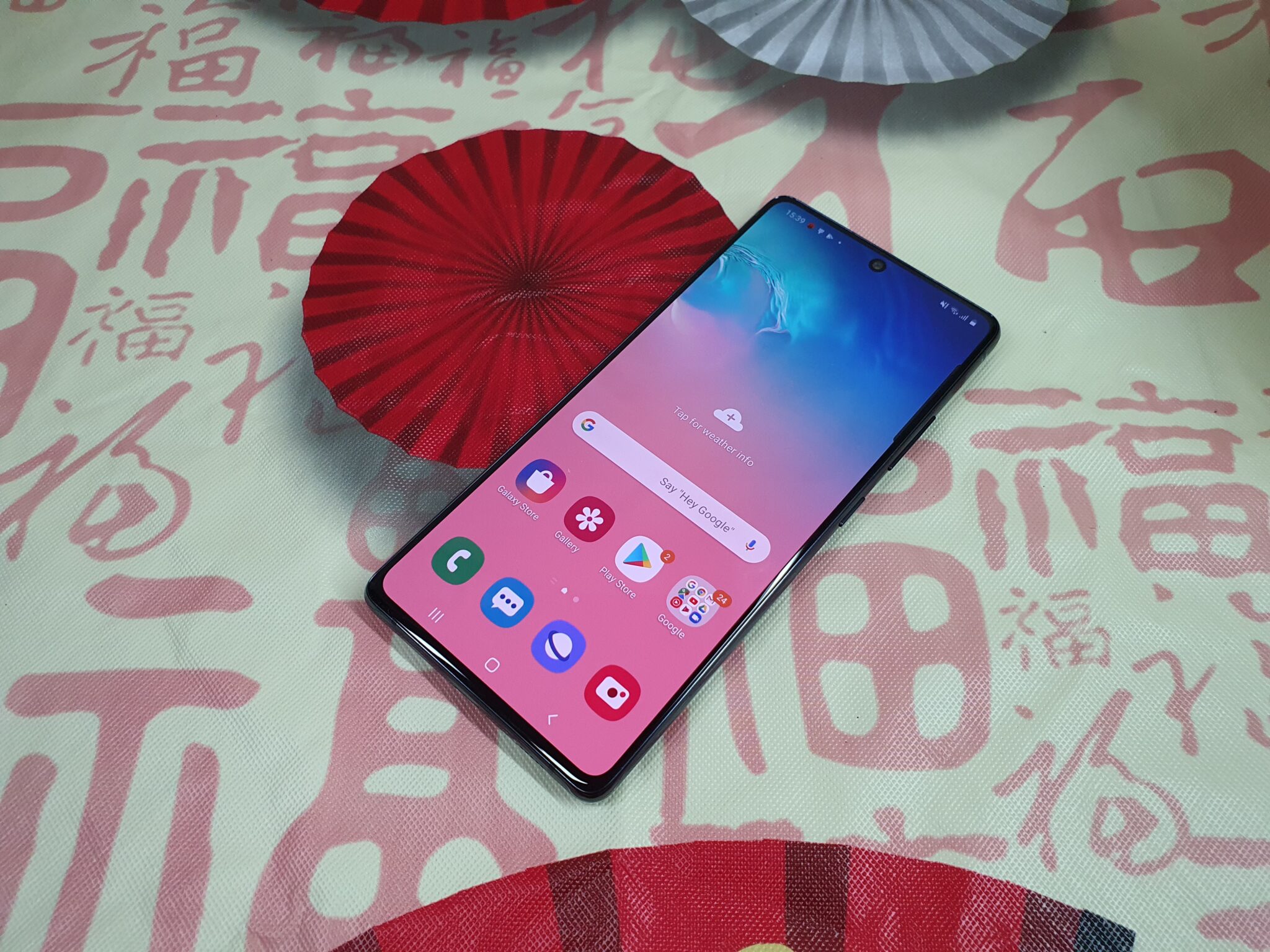 Seeing the pattern of prior Galaxy A smartphones, you’ll likely get a protective casing to go with the phone along with a pair of Type-C headphones though this is speculation at best at this point in time ahead of the local launch. It’s hard to speculate beyond what we have in hand.

It will likely be priced cheaper than the Galaxy S10e but will likely cost more than a Galaxy A70; yes a Galaxy A80 exists but it’s more of a niche offering at best which pegs the price of the phone between RM2,699 and RM1,999 and at that price point, it’s a well wrought device that fits its intended price tag. It has hit preorders in India though at INR39,999 which is about RM2,278 with change which is within range of our estimates.

On its own merits, the Galaxy S10 Lite is very well constructed for a phone with excellent build quality. Where it impresses is that Samsung has managed to cram a battery this large into the phone while retaining the slim design that the Galaxy S10 series are known for with only a very modest tradeoff in weight;  competing brands with a battery this large will usually end up with a phone the size of a brick and the weight to match which makes it quite a feat of engineering. Stay tuned for the upcoming full-on Galaxy S10 Lite Malaysia review after we put it through its paces.