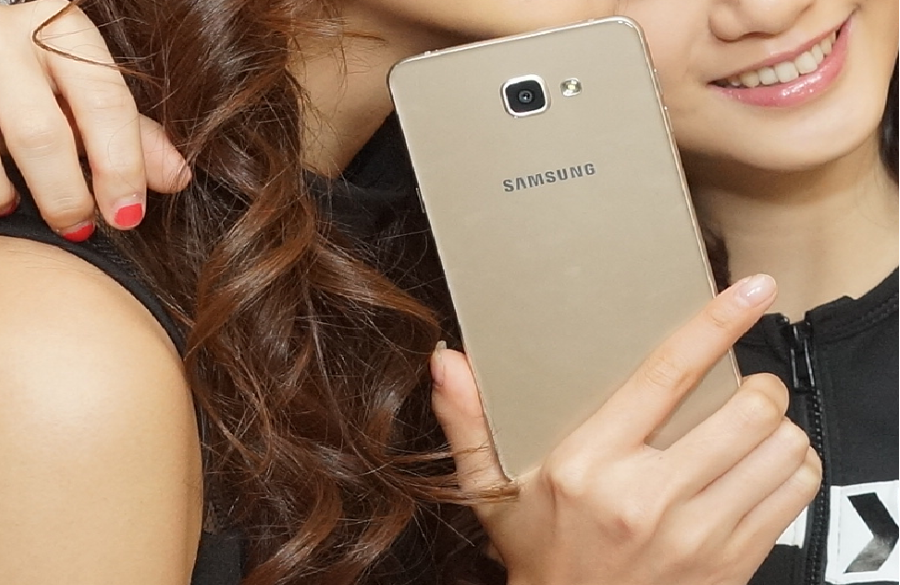 Last year was a watershed moment for Samsung when they decided to do away with niceties that everyone got used to with their flagship phones like removable batteries and expandable memory with their S6 range, its plethora of variants and their Note 5 phablet that  elicited a rather mixed response from hardcore brand loyalists and newcomers alike.

The Samsung Galaxy A9 has a slim bezel and is 7.4mm thin while weighing 200g

While everyone is waiting for the vaunted successor to last year’s Galaxy S6 to make an appearance, which usually happens at Mobile World Congress that will be taking place in sometime near the end of February, they’ve launched their workhorse A-series phones yesterday in Hong Kong lead by the new Galaxy A9.

The Galaxy A9 has, to date, the largest battery they’ve ever crammed into a smartphone along with a huge 6-inch screen, 32GB onboard storage and some swanky good looks in the bargain. Our source, a top blogger in Hong Kong got their hands on a retail unit and we took a quick firsthand look at just what makes Samsung’s latest (and largest) workhorse phone so special.

Build Quality
Taking a leaf from the Galaxy S6 and Note 5, the A9 is made of aluminium sandwiched by 2.5D Gorilla Glass 4 on the front and rear. It feels surprisingly good when held and is cool to the touch with a firm, reassuring heft. Close your eyes and you’ll likely have a similar sensation of quality like that of one of Samsung’s flagship series phones. Samsung has nailed down the build quality and it’s hard to top, more so when it trickles down to their A series range of workhorse phones.

The rear of the Galaxy A9 is sheathed in 2.5D Gorilla Glass and feels cool to the touch.

The A9 is astonishingly slim at 7.4mm and is 2.7mm at its thinnest point while weighing about 200g. In comparison, the Galaxy Note 5 weighed in at 171g and the S6 was 153g. The slimness of the bezel and the rounded nature of the edges and backplate makes it rather pleasant to hold though its large size does make it somewhat of a challenge to grip for those with small hands.

The silhouette of the A9 is slim with metal buttons and gently beveled edges.

It’s a bit heavier too compared to the Note 5 on account of the larger display and built-in 4000mAh battery but it’s a trade-off that’s well worth it. Officially, the phone will come in gold, white and a rose gold finish in Hong Kong but available colour choices will likely change if it ever arrives in Malaysia.

The Hong Kong launch of the Galaxy A9 saw the release of three different colour variants in gold, white and rose gold

Display
The Samsung Galaxy A9 has a 6-inch 1080P Super AMOLED display and is sheathed in 2.5D 4th generation Gorilla Glass for enhanced survivability to drops.

Like other Samsung devices sporting Super AMOLED displays, the A9’s touchscreen is vibrant with lush colour rendition that’s pleasing to the eye. Viewability was excellent with good colour rendition and viewing angles even when viewed from off-angle.

The crisp 1080P super AMOLED display on the Samsung Galaxy A9

The Galaxy A9 (left) side by side with the Galaxy Note 5 (right). Despite being larger, the A9 looks slimmer than the Note 5.

The bezel is strikingly slim too and compared side by side with the Galaxy Note 5, the A9 is remarkable for the fact that it manages to cram in a larger screen in a form factor that is only marginally larger and heavier than the Note 5.  At a stretch, someone with a reasonably sized handis still able to reach from one end of the A9’s display to the other without pulling a tendon. Quite a feat of engineering indeed.

Hardware
The Galaxy A9 runs Android 5.1 Lollipop overlaid with their TouchWiz user interface on a 64-bit Snapdragon octacore processor (1.8GHz + 1.4GHz quadcore) paired with 3GB RAM and 32GB of onboard storage and with the pleasant addition of a microSD card slot that supports up to 128GB cards. We missed you microSD card slot. Welcome back. After loading up the firmware and whatnot, you’re left with about 22.85GB of usable onboard storage on the A9.

The A9 also has a dual nano SIM card slots with both slots supporting 4G connectivity. The dual SIM card slots put it on par with the local Note 5 Duos variant though oddly enough they’ve eschewed the ‘Duos’ designation for the A9. Effectively, this means you can use two SIM cards and a microSD card on the A9.

Powering the whole shebang is a nonremovable 4000mAh battery that offers all day battery life with fast charging tech built-in. Our source wasn’t able to field test the longevity of the battery but with something that large and with fast charging tech, it’ll easily take on most use-case scenarios with at least a full day of juice even with the large display. An additional bonus is that the home button doubles as a fingerprint reader for mobile payment and unlocking the phone though this likely will only be utilised only for the latter if it reaches Malaysia.

An initial Antutu benchmark test clocked the A9’s processor in at a respectable 72,450 while the vaunted Galaxy Note 5 clocked in at 83,944.

Camera
The rear camera on the A9 is a 13-MP with an F/1.9 lens and optical image stabilisation for judder free shots.

The front is an 8-MP selfie camera that also has an F/1.9 lens. The A9 supports a number of modes including a wide-angle self-timer mode, a Palm Selfie mode that lets you take a selfie with a waving gesture and the usual beauty modes to correct blemishes and the like. Front and rear video is 1080P resolution. Like the earlier Note 5, double tapping the home key on the A9 instantly unlocks the camera for use.

Pricing
When released in Hong Kong on the 22nd January, the A9 will retail at HKD 3998. That translates to about RM2221 though with added taxes and other additional costs thrown it, it may likely be a bit higher at the RM2499 mark or so though there’s no official word from Samsung Malaysia as to pricing or local availability as yet.

While the Galaxy A9 likely may not appear at all in Malaysia, it’s certainly one desirable phone indeed with a droolworthy set of features. While an A series launch is slated for the 28th of January this month in Malaysia, it remains to be seen which of the three A-series phones will arrive in Malaysia (A5, A7 or A9). We’ll find out more as the data approaches.