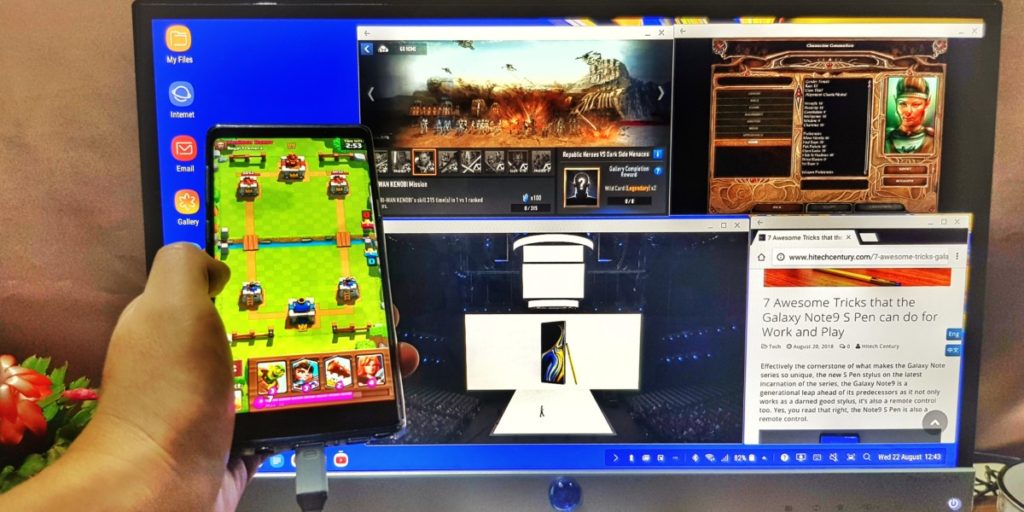 Much has been said about Samsung’s Galaxy Note9 phablet and its lauded 6.4-inch Quad HD+ Super AMOLED display that is capable of rendering up lusciously brilliant hues and pin-sharp text to make both watching movies and playing games onscreen an absolute delight.

While it is a rather entertaining means to while away a few hours on the commute, sometimes even the Note9’s large 6.4-inch display simply isn’t as big as you want it to be, which is where it’s subtlest yet most powerful feature comes into play. Enter The Note9’s DeX mode. 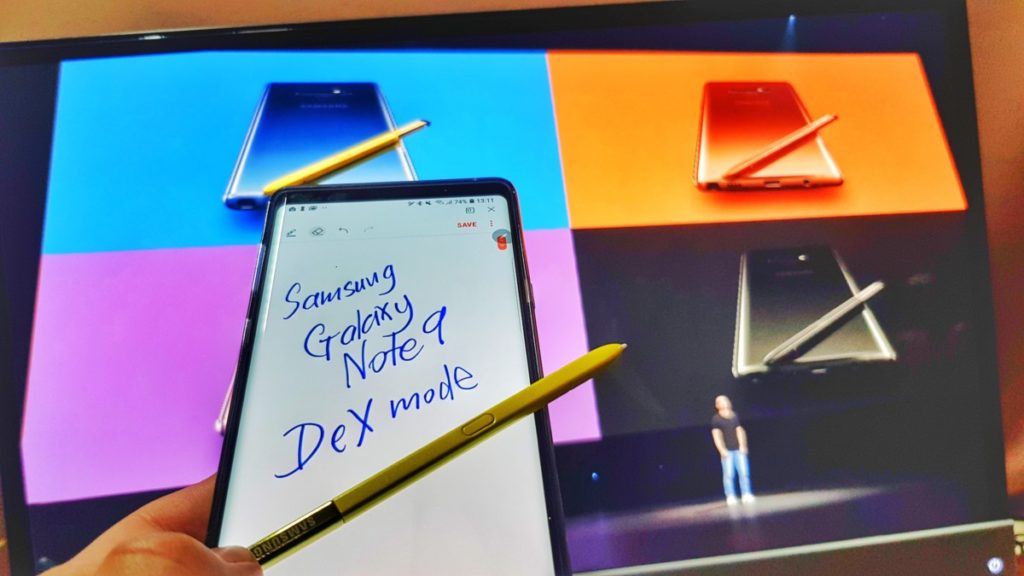 An acronym for Desktop eXperience, DeX mode is a unique desktop mode when you hook the Galaxy Note9 up to a monitor via a HDMI adaptor or via the Samsung DeX Pad or DeX Station.  In DeX you get all the advantages of working on a larger monitor including the increased screen real estate as well as the option to wirelessly hook up a keyboard and mouse to effectively turn it into a PC of sorts. This is a step above the usual plain old screen mirroring mode on many competing phones that only lets you use a tiny swedge of the monitor display that mirrors your smartphone.

The desktop style interface of DeX mode means you can perform a host of things including dragging and dropping files, resizing various windows and most if not all of the usual actions associated with a typical Windows desktop interface. 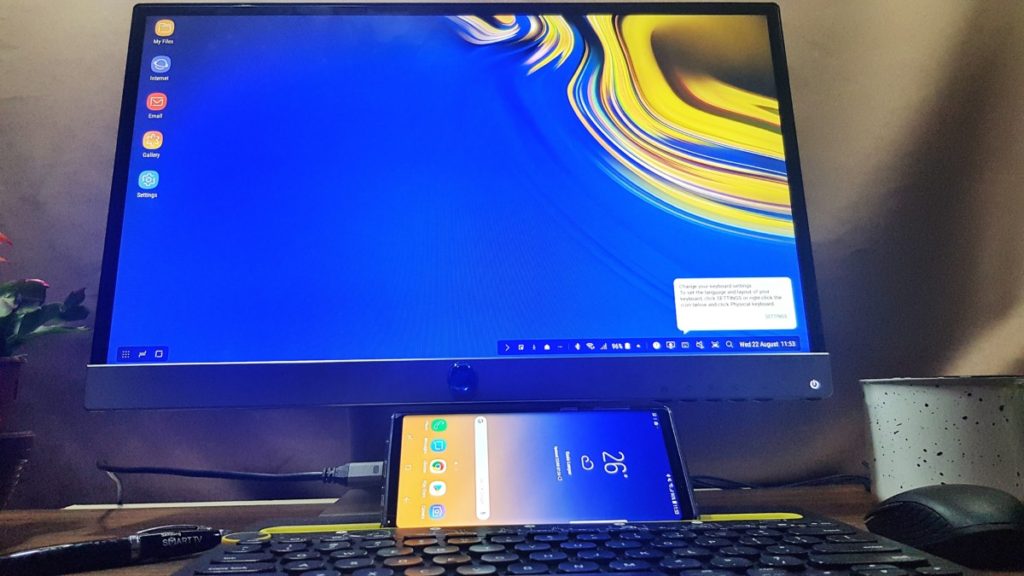 The Samsung Galaxy Note9 has a unique feature akin to the new  Galaxy Tab S4 slate in that you can deploy the DeX desktop mode with any HDMI adaptor – even third party ones.

The best part? The Galaxy Note9 is able to use DeX mode straight out of the box as it handily accepts any third party USB Type C to HDMI connector to initiate DeX mode, making it quite literally plug-and-play. No keyboard or mouse? Not an insurmountable problem as the Note9’s display can be used as both a touchpad and virtual keyboard too.

Bar the immediately obvious applications for using Window’s PowerPoint for presentations to the higher ups and writing out reams of text as well as spreadsheets on Windows Excel and Word, DeX mode isn’t simply intended for serious work. It has, how shall we say, rather interesting off label applications in regards to both watching content be it streamed movies, YouTube and whatnot and even gaming, all of them with the wonderful ramifications of enjoying them on a bigger screen. 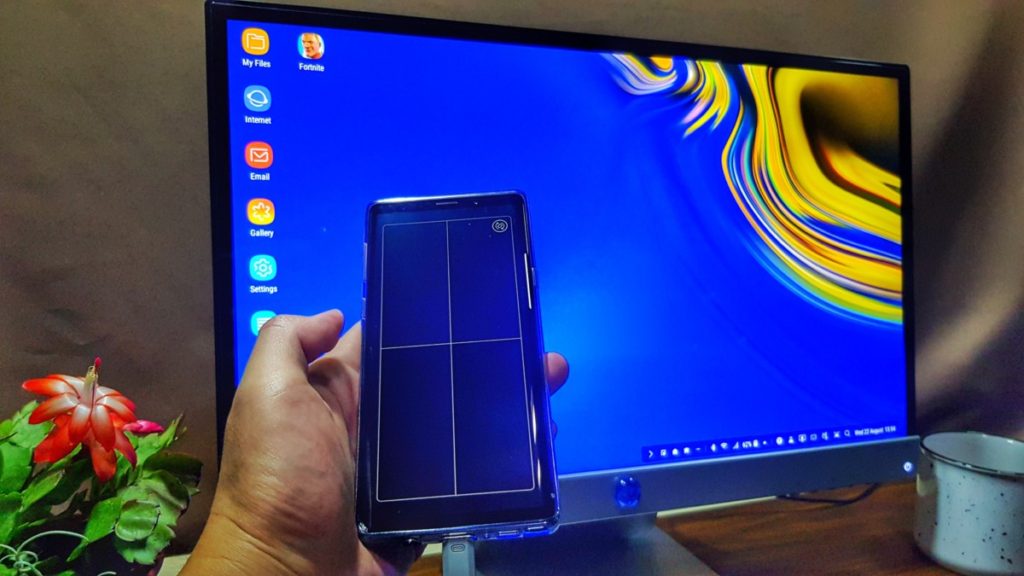 Missing a mouse? You can use the Note9’s display as a touchpad and virtual keyboard in DeX mode.

Fun and Games on the Galaxy Note9’s DeX mode

With DeX mode activated on a suitable monitor, you’re able to watch everything you usually enjoy writ large. Movies and images saved on your phone as well as YouTube are all upsized to the full dimensions of your monitor and you’re able to watch your usual paid-for streaming favourites too in a windowed fashion though there are some workarounds. The killer feature here is using the S Pen as a remote control, allowing you to play and pause content as you see fit; presumably so you can nip to the kitchen to top up your popcorn bowl.

This is also where the Note9’s stereo speakers are brought into play as they are able to kick out quite a bit of sound with surprising clarity, allowing you to enjoy movies in an aurally pleasing fashion without having to go plonk out for an additional pair of wireless speakers. While it’s a treat to watch content in DeX mode, it knocks things out of the ballpark because it lets you play a variety of games from the Google Play Store on a big screen, several with the added advantage of being able to use a keyboard and mouse. Say it with me folks – you can play games on DeX! 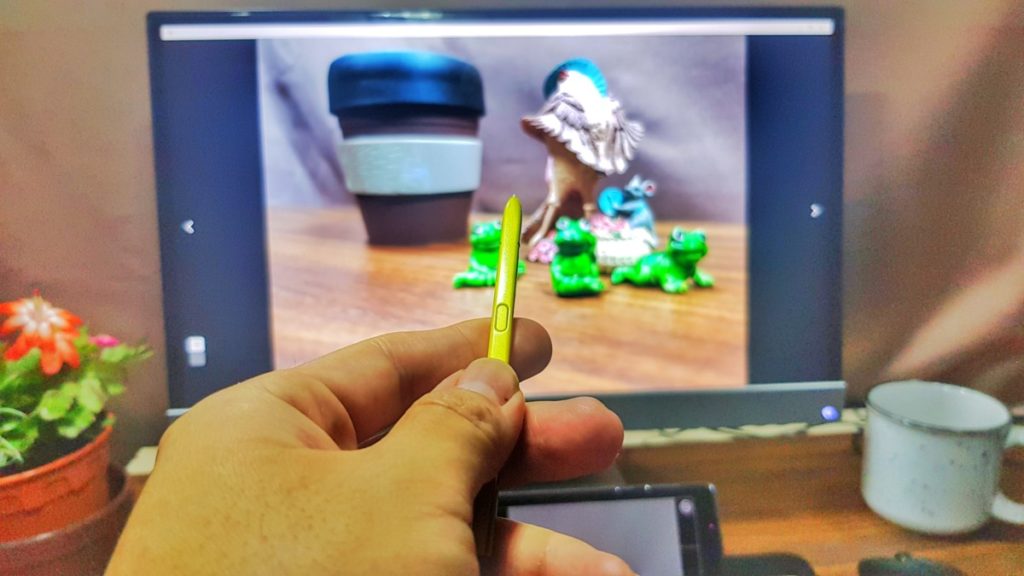 Greasy fingers? Too far away from the remote? That’s what the S Pen is for as you can play and pause content or in this case move forwards and backwards in the image gallery.

Not all games on the Google Play store are compatible with DeX mode of course and your mileage may vary with several only playable in windowed mode for now but many of the best are playable with a mouse and keyboard on a monitor via DeX mode including team MOBA game Vainglory 5v5, the eponymous battle royale game Fortnite and clicky adventure Star Trek Timelines.

If you’re a true gaming aficionado, you can also bring back true gaming classics from the Google Play store like Baldur’s Gate II: Shadows of Amn, the original Baldur’s Gate and arguable one of the most well written RPG games in the history of gaming – Planescape: Torment, all of which are playable in their full glory in the full width of the display on DeX. 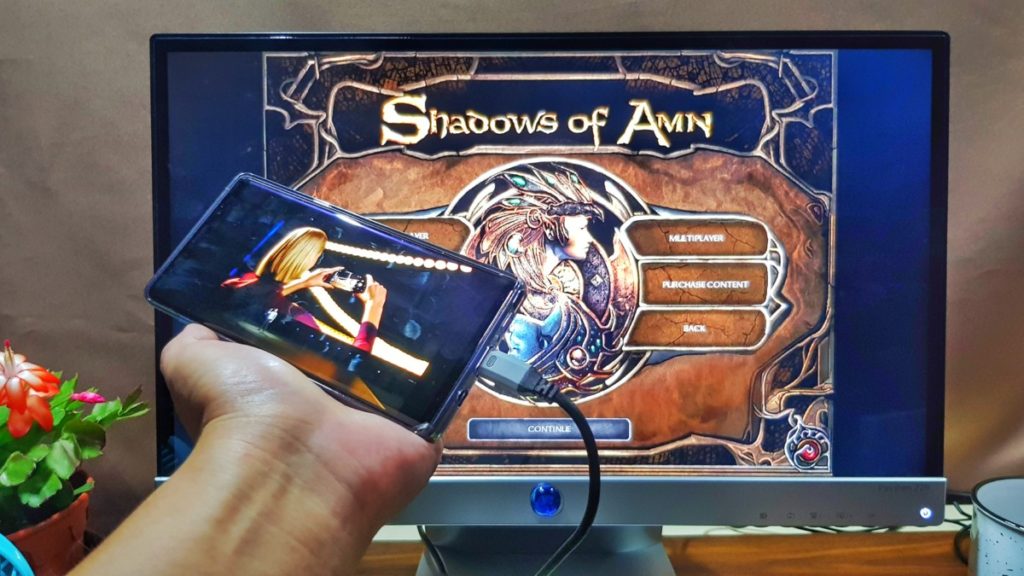 What makes DeX a marvel is that you’re able to multitask in an extremely able fashion with you watching content or gaming on your phone while doing the same on the other as well as vice versa. In effect, you’re able to, for example, watch YouTube on your monitor via DeX and continue gaming on your phone or other do other stuff like take calls, text a friend on Facebook or whatnot. That, folks is one sweet trick indeed. More so for that fact that it’s all achieved on one mobile device in a competent fashion without you having to fork out extra cash.

It is still early days as DeX mode continues to be populated with compatible apps but it holds immense promise indeed as it continues to be constantly improved on and it remains a subtle but key linchpin of what the Galaxy Note9 is capable of. Now, if you’ll excuse us, we have another match of Vainglory 5v5 coming up. In the meantime, you ought to check out Samsung’s roadshows that are taking place nationwide this coming 24 August where you can trade-up your old phone and get a new Note9 with a ton of free swag and rebates too. 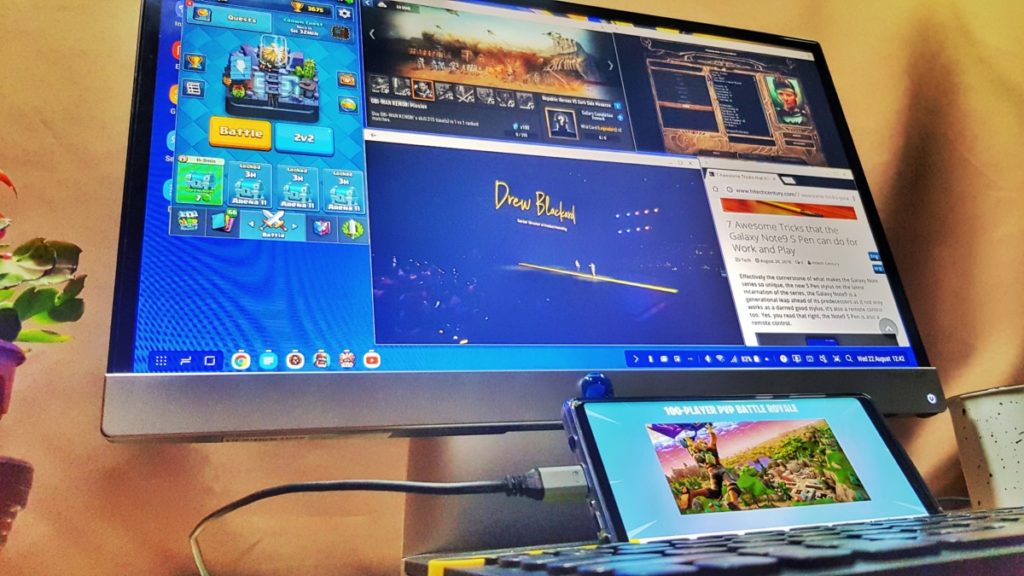